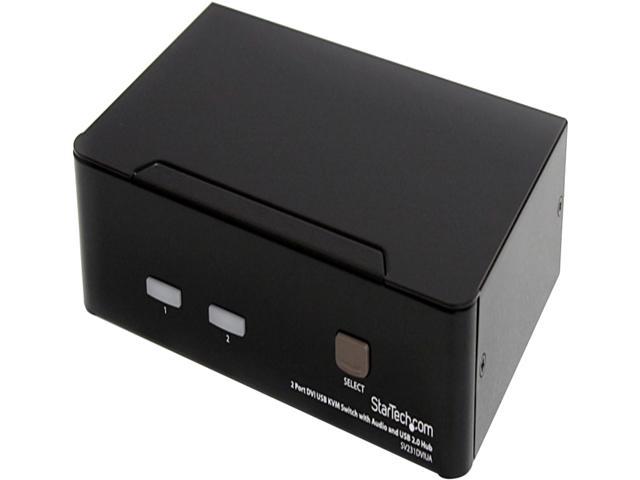 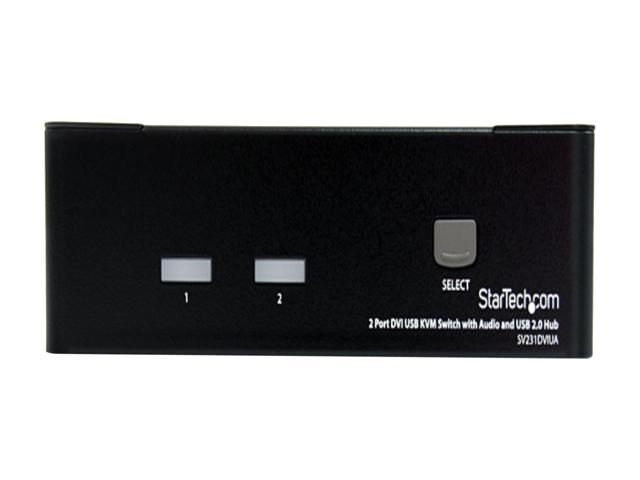 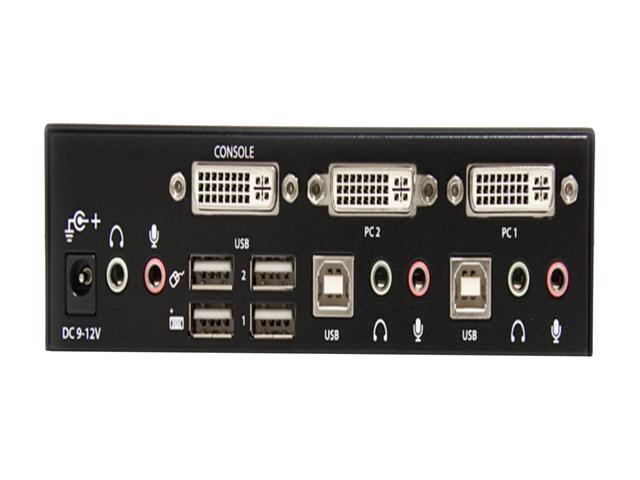 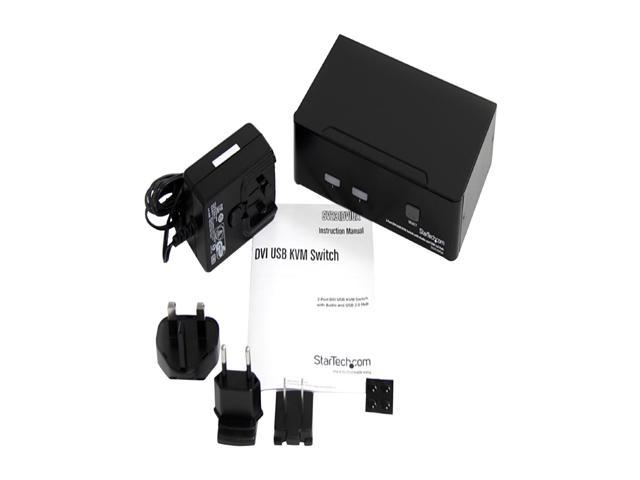 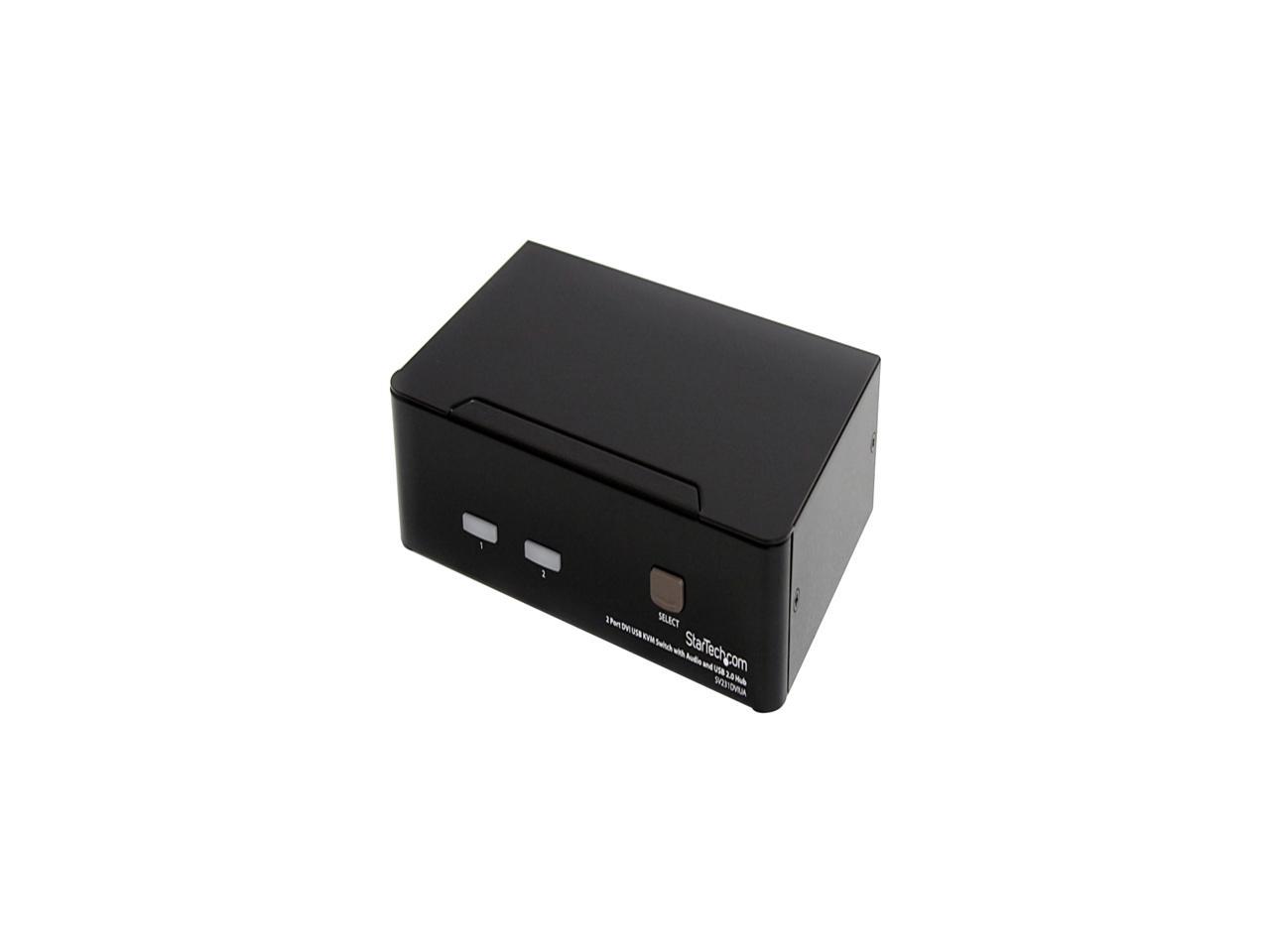 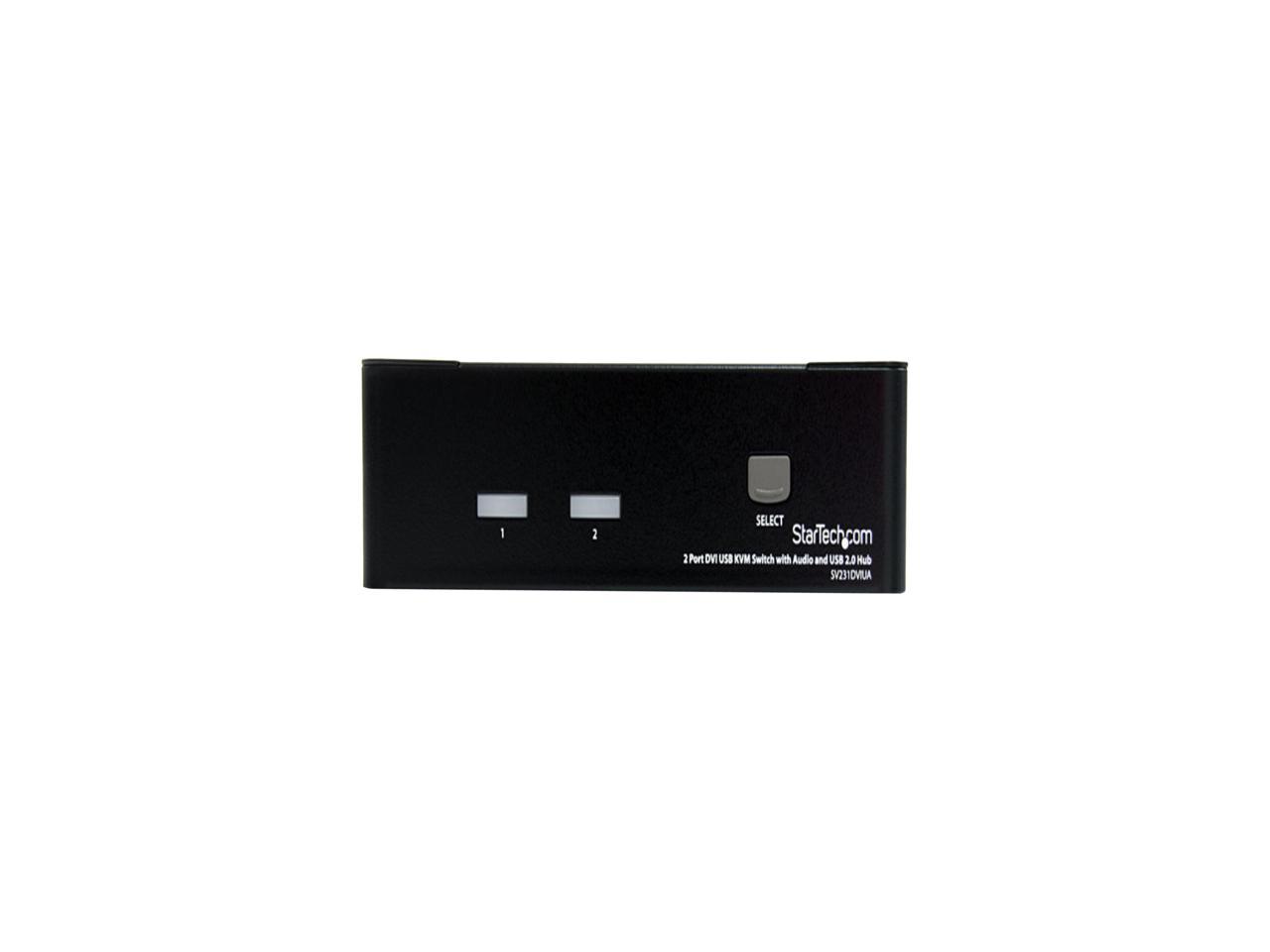 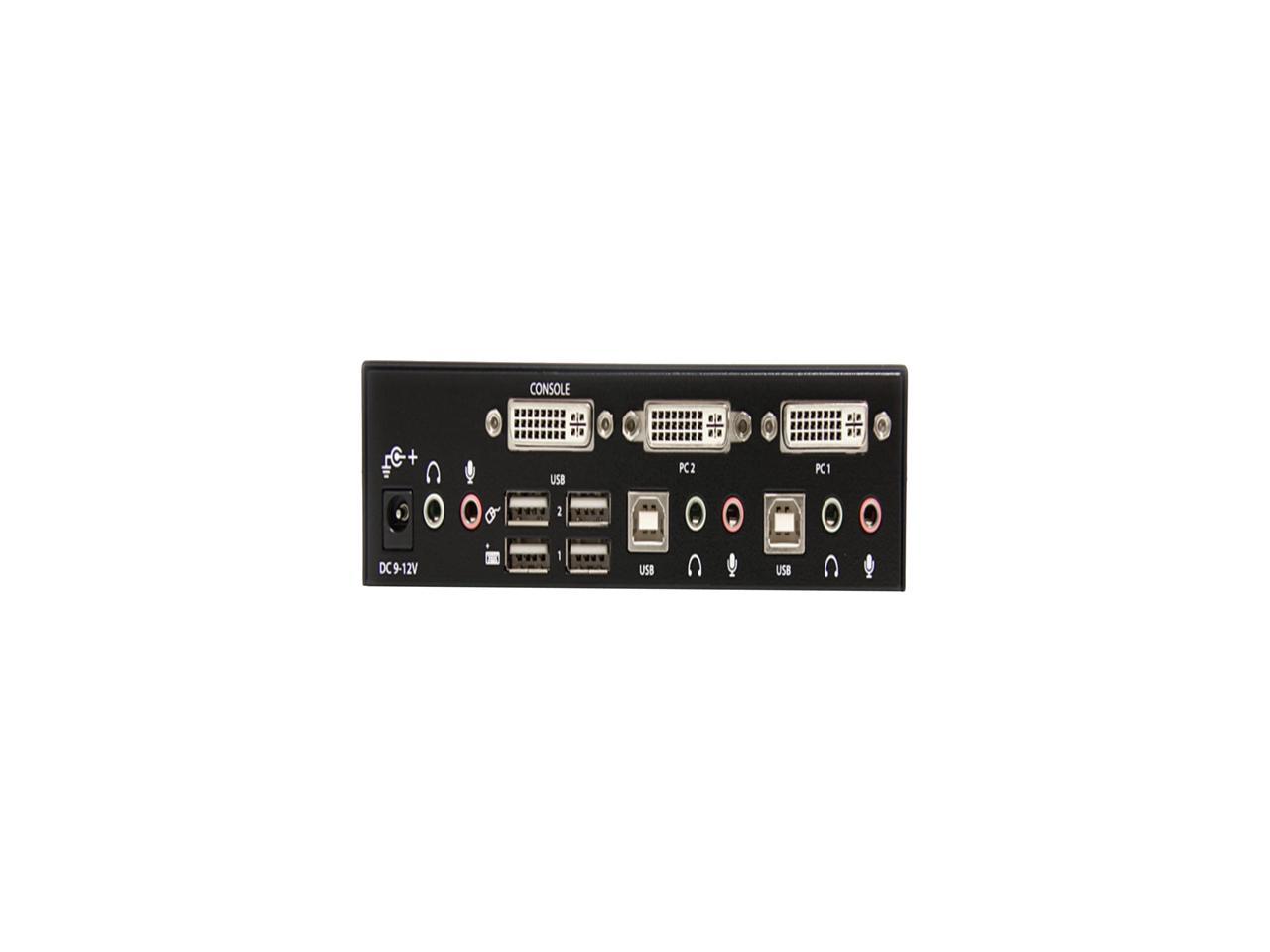 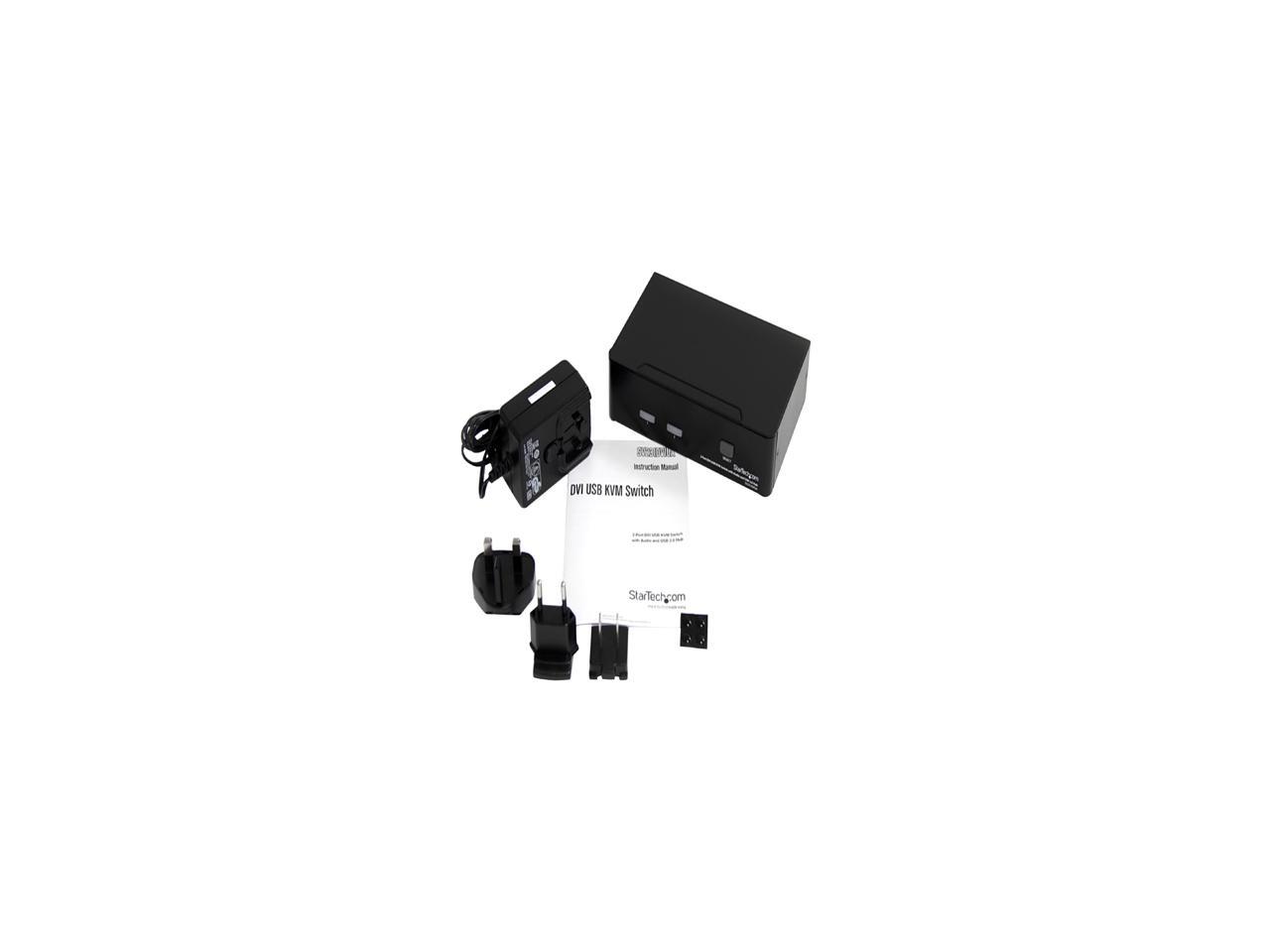 Learn more about the STARTECH SV231DVIUA

Pros: Technically, this does switch between your displays... when it works.

Cons: This KVM will sometimes neglect to register key events, most noticibly key-up events, meaning your x turns into xxxxxxxxxxxx. Other times, it will just stop registering key events altogether. The only way to address this is to power cycle the KVM. Sometimes, the device will just MAKE UP KEYPRESSES! As I type this, the F key for "brightness-up" suddenly started spamming, and now it just sit there, repeatedly trying to exceed max brightness. I've had the opposite happen as well, where brightness-down would suddenly start repeating, and my screen brightness would shoot down to zero, meaning I'd have to crawl back under the desk and restart the KVM so I could see my screen again. If you think you can use this with anything but a generic keyboard, think again. This KVM does not pass through anything but the generic keyboard codes.

Overall Review: This was a really disappointing purchase. If I could exchange this device for a dual-link capable DVI kvm which is known to actually work reliably, I'd do so in a heartbeat.

Cons: The first one would not work well with DVI. Then started causing "runaway" duplicate keystrokes with mouse and keyboard. Then it stopped working comletely. I unplugged it for a month, and had my IT connect it again. It worked for a few days, then failed completely again. I ordered another one, exactly alike, since I depend on the KVM switch to make life easy. It arrived on 113011. I connected it exactly as per the included instructions, and it worked for about 10 minutes using DVI connections. Then the music I was playing on the PC in the background stopped playing and made loud static noises, the mouse and keyboard locked up, and the monitor went black. I could not perform the "normal " Windows shutdown on either of my two PC's, since I had no operative monitor. I turned the power switches off to both machines. I disconnected the KVM switch completely, then restarted each PC after connecting K+V+M and speakers directly to each machine in turn. Each PC then started normally.

Overall Review: I have two PC's used for work. These are nearly identical, both using Antec 1200 cases, 1000watt PS's, Asus P6x58D-E MoBo, Intel i7-960 CPU, similar DVI Video cards, beaucoup 1Tb HDD's, 1 has 12 Gb RAM, the other has 24 Gb RAM, both Win 7. I connect all the hardware components, then call my IT to start them and load all software and the latest factory drivers. These machines perform flawlessly without the KVM switches connected, but are a constant nightmare with the KVM's connected. I am an Electrical Engineer, but neither I, nor my IT, can figure this one out. The combination just does not work. I will have to RMA both of these units. One egg, since the ratings won't allow Zero eggs. The product literature states that this unit is for "two monitors". But the instruction manual references multiple PC's, as do the rear connections of the KVM switch, with a SINGLE monitor (this what I want; 2 PC's with a Single monitor). I therefore do not believe I am misapplying the switch.