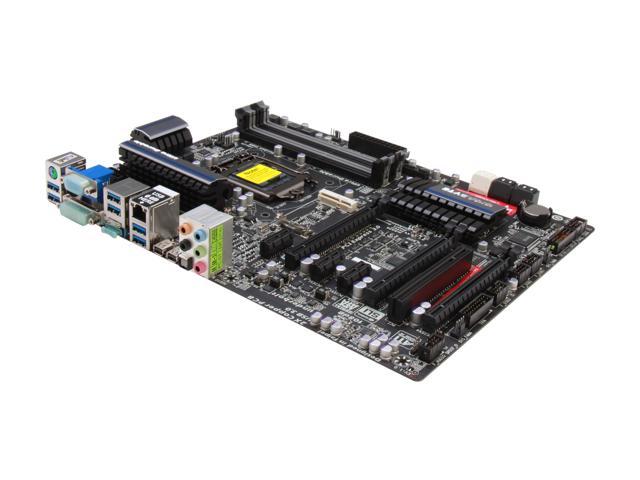 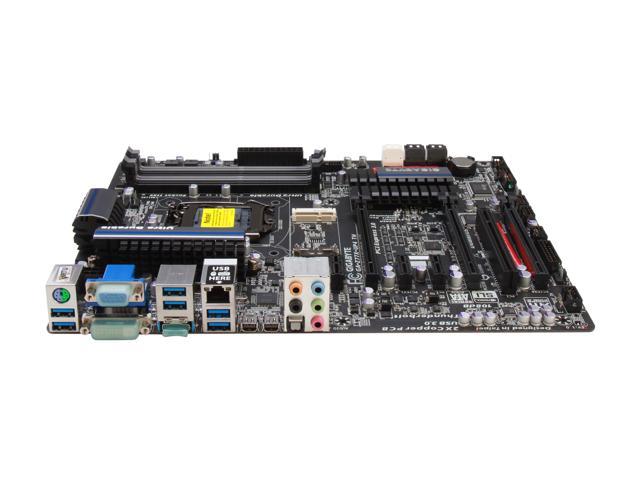 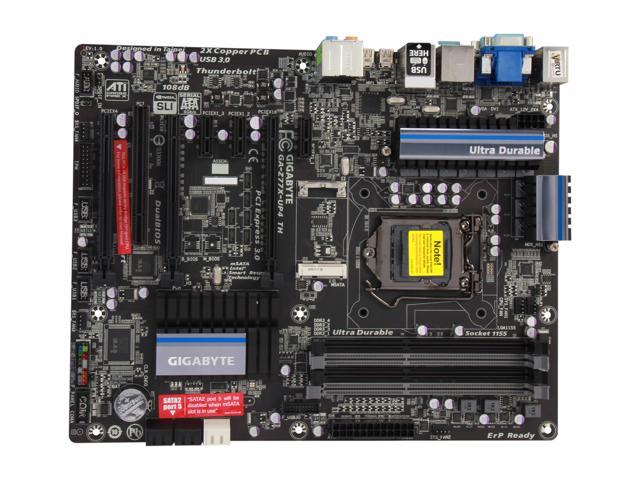 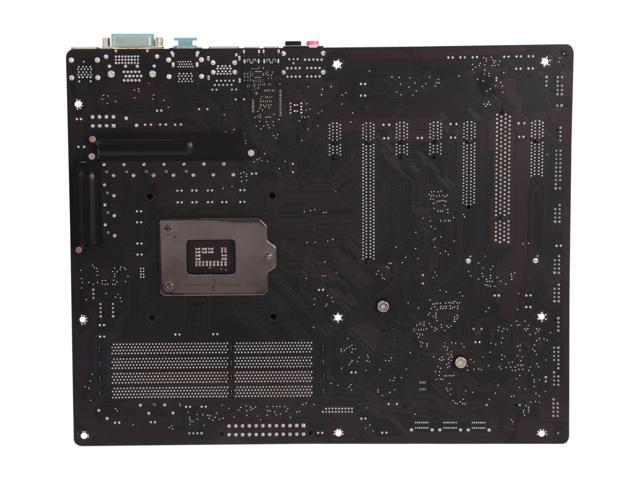 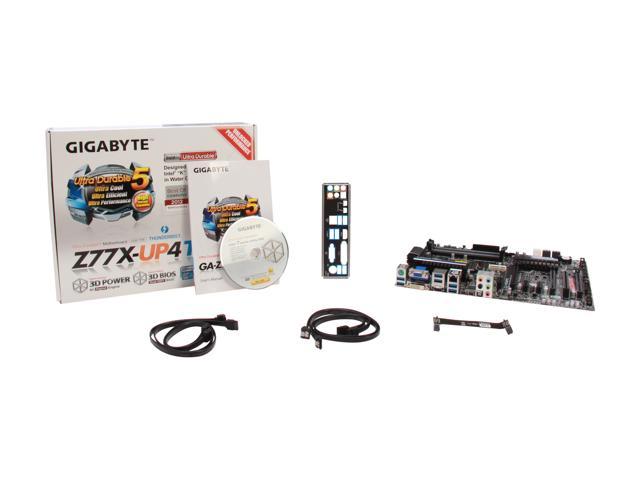 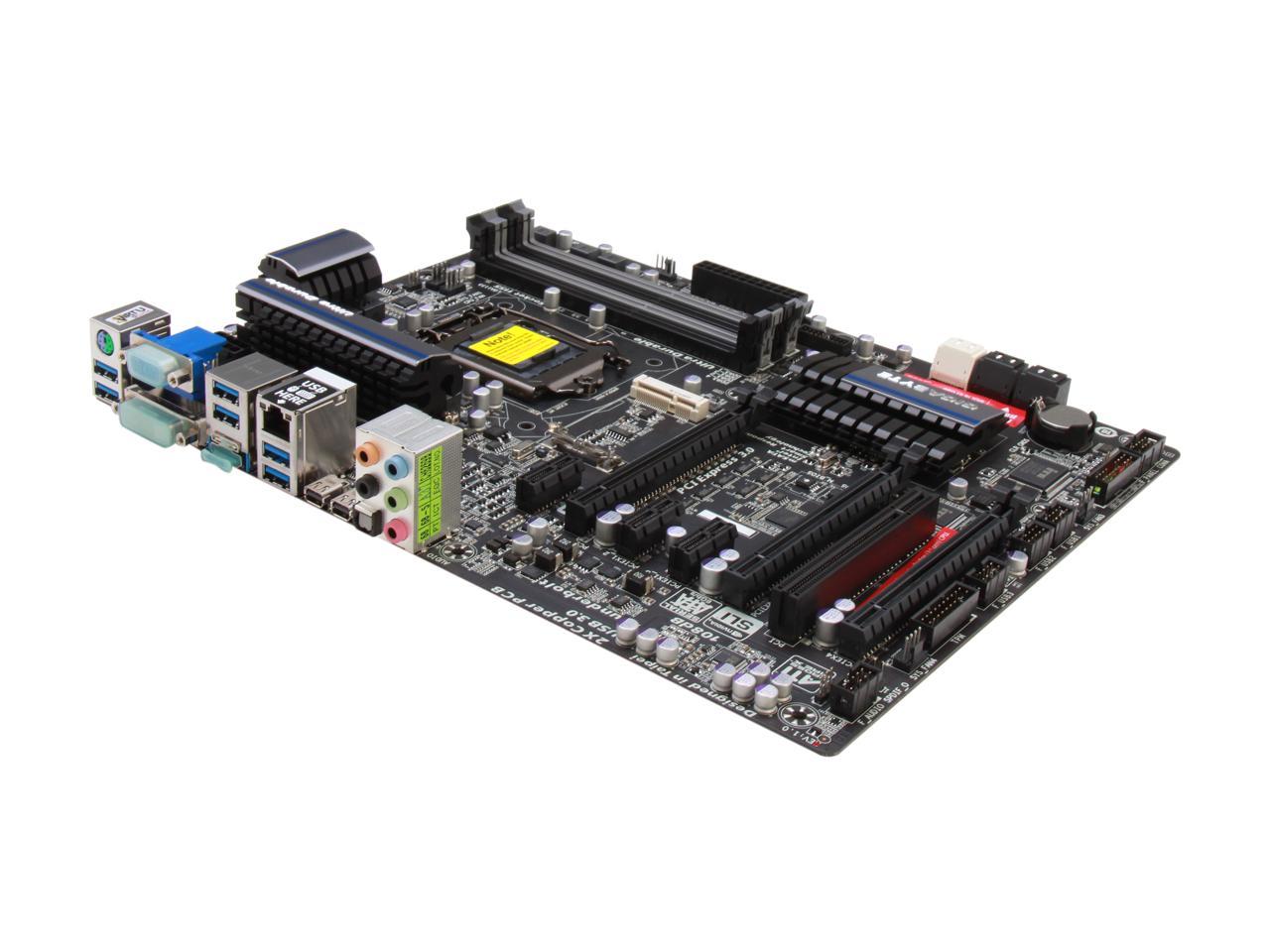 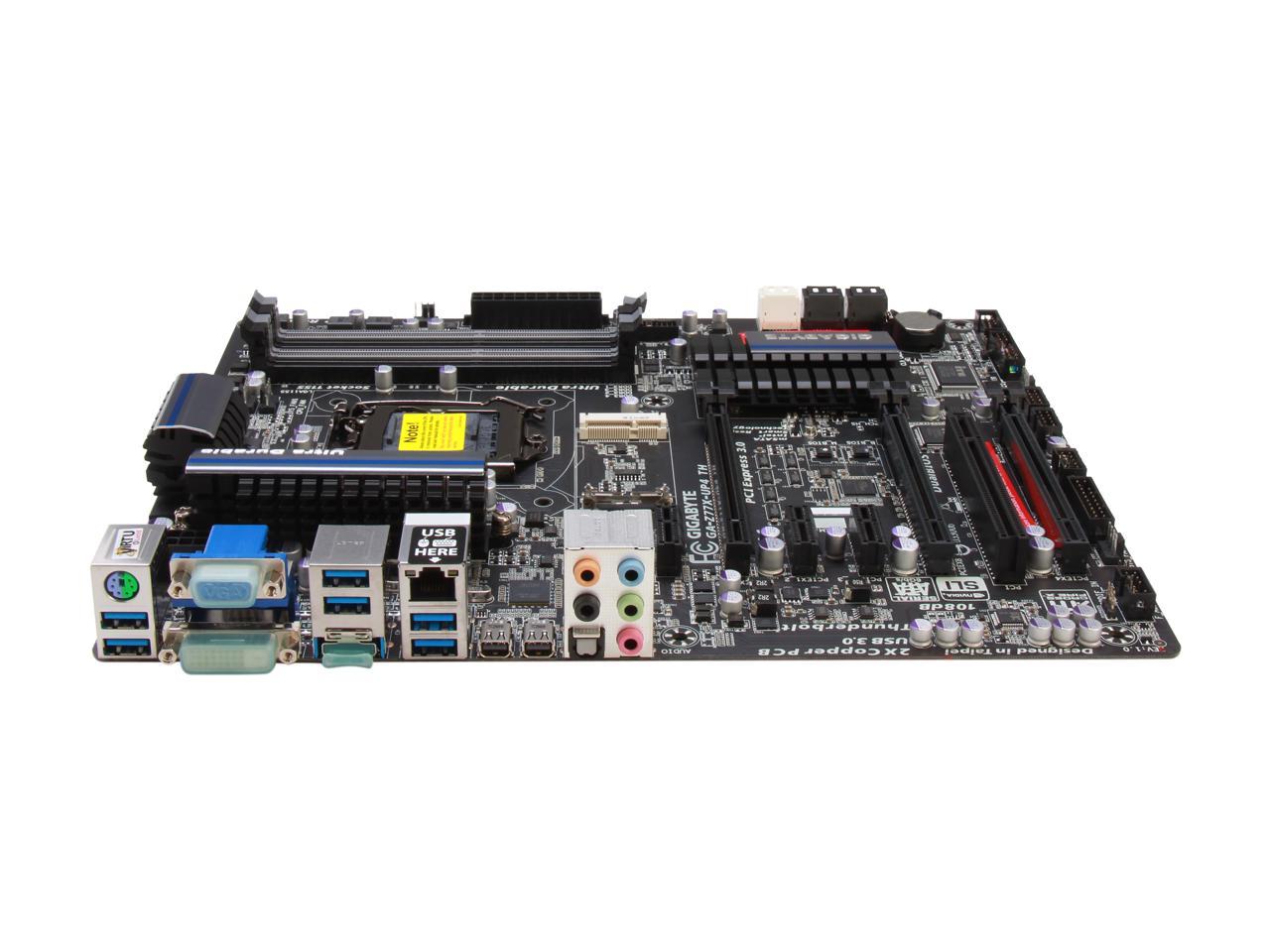 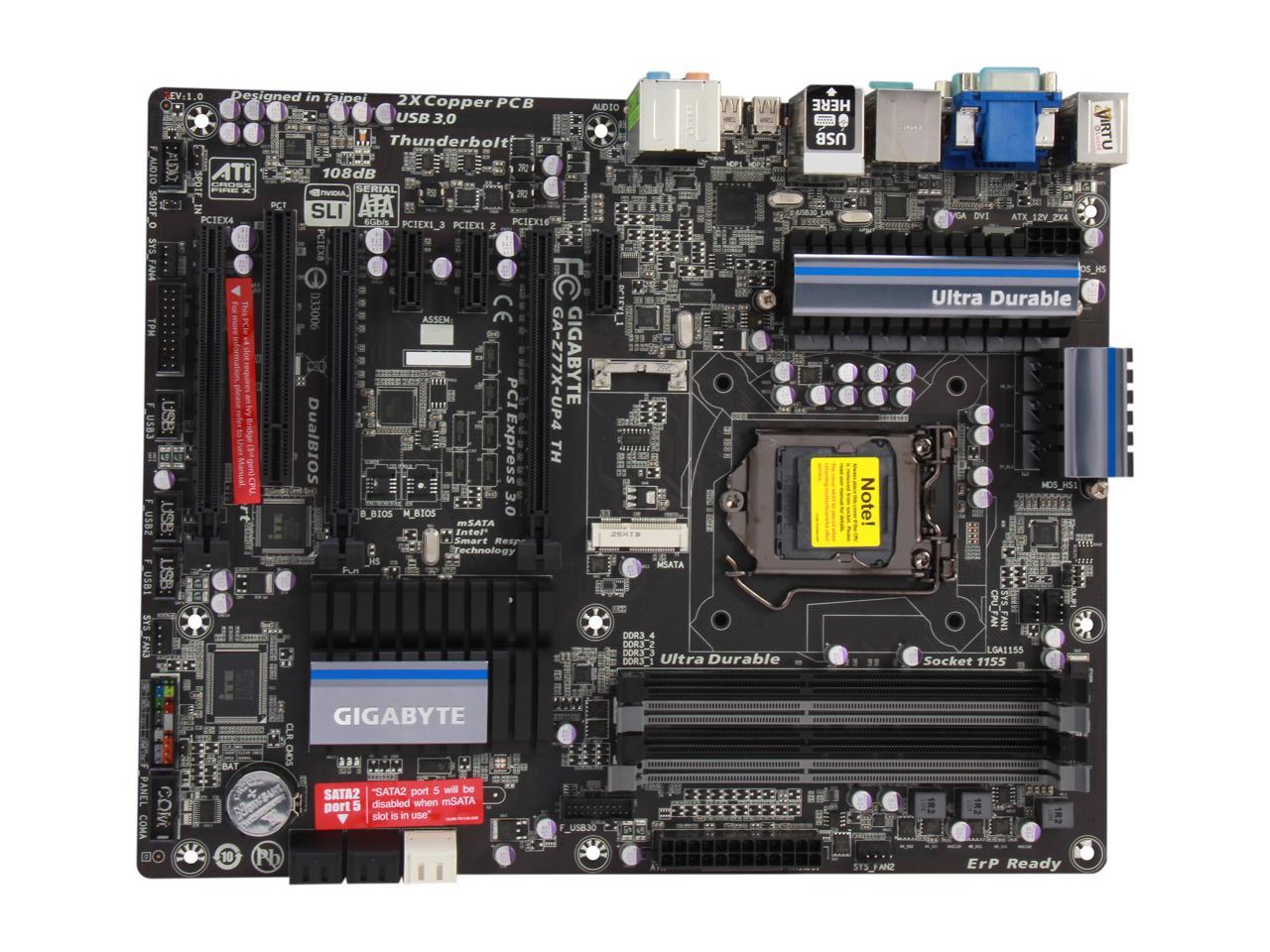 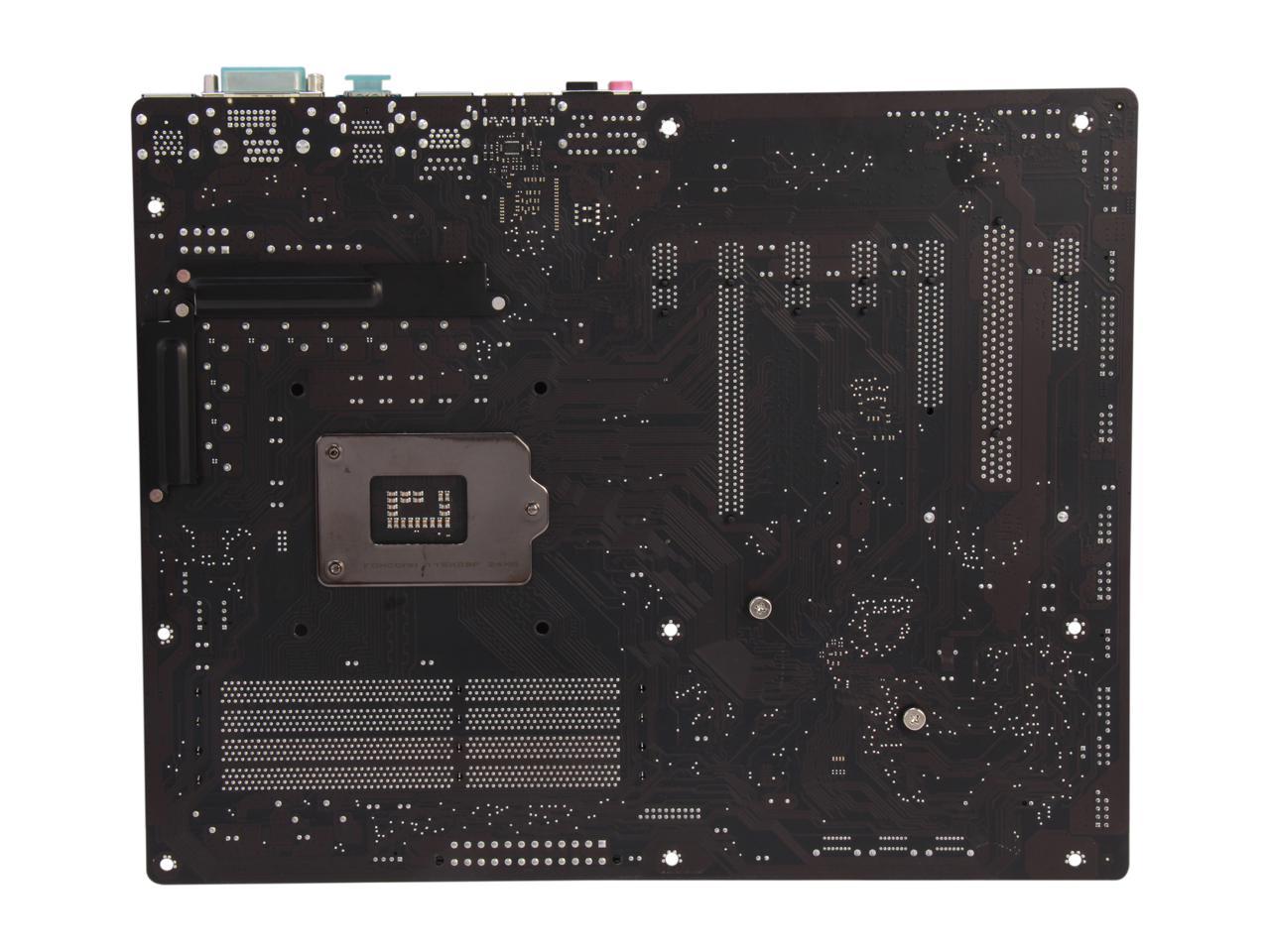 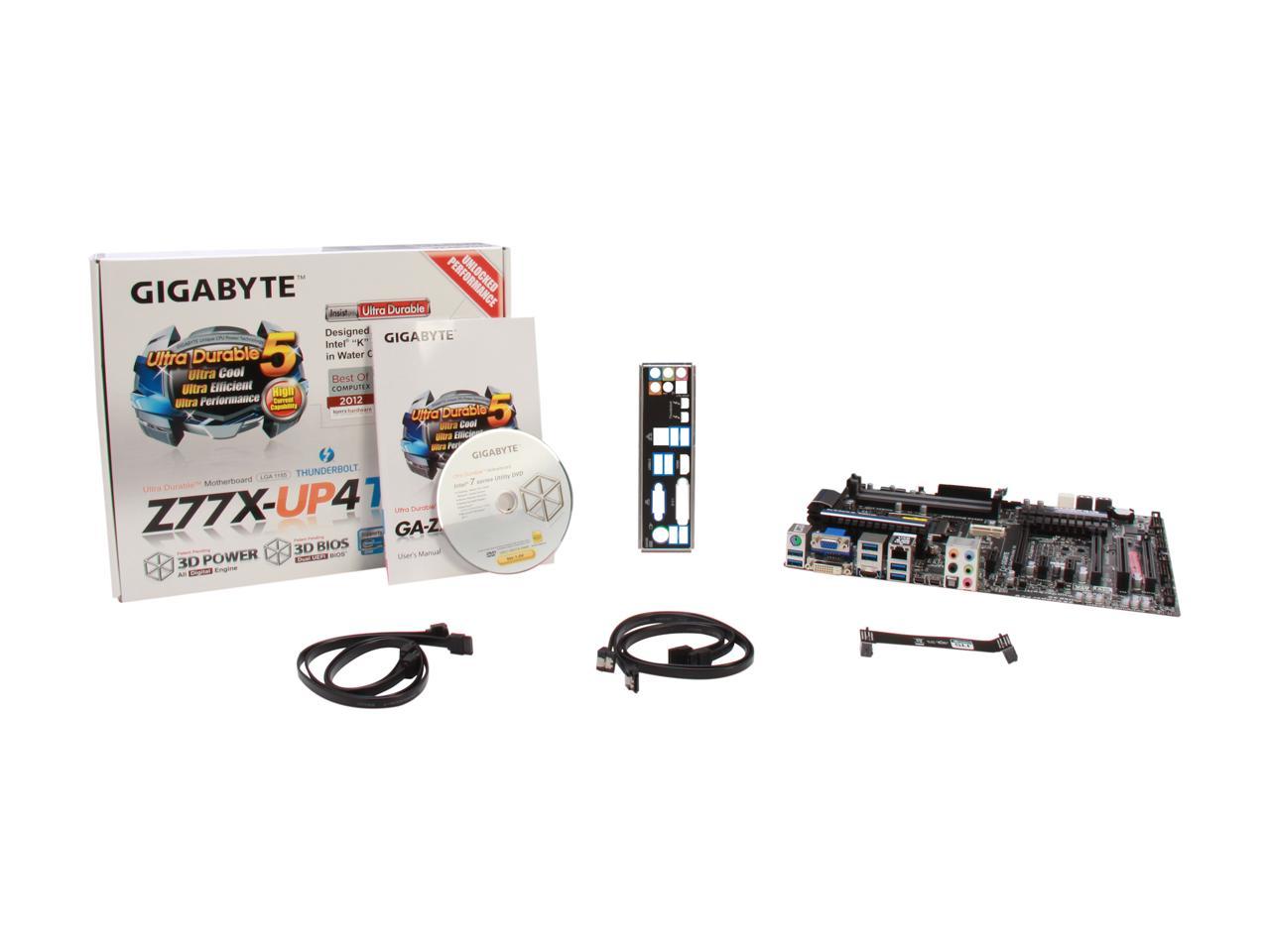 (60) Write a Review
OUT OF STOCK.
Fees for brokerage and duty included in price.
Overview
Specs
Reviews

GIGABYTE motherboards, the very first to offer fully certified dual onboard Thunderbolt ports. Capable of connecting up to 12 devices plus 3 digital displays simultaneously, with breathtaking data transfer speeds that can transfer 1TB of data in only five minutes, GIGABYTE GA-Z77X-UP4 TH motherboard offers the fastest connection interface ever on the desktop PC.

In addition, it also combine a host of new and exciting technologies with the latest Intel Z77 Express Chipset, creating a fantastic motherboard designs that harness the outstanding performance of the new 3rd generation Intel Core processors. With an exclusive 'Digital' VRM design, GIGABYTE 3D Power and GIGABYTE 3D BIOS (Dual UEFI), the GA-Z77X-UP4 TH motherboards ensure exceptional power delivery and absolute control, with additional features that ensure an unrivalled experience on your next PC build.

Pros: I trust Gigabyte with making rock solid boards when stability is a must. Install was a breeze and recognized all 16GB of RAM with the correct timings on the first boot. Haven't had a chance to use the thunderbolt ports but I like that when I do I won't need to upgrade.

Cons: I'm not a huge fan of the included software on the install disc. I just install the board drivers and that's it. I feel most enthusiasts are like me who buys a premium board like this and will overclock in the BIOS.

Overall Review: Will update as use goes on.

Pros: I have only owned this for a week. Windows 7 Professional does not support much of the chipset on a fresh install, so you will need to use the provided disc. I am probably one of the first to purchase this motherboard, but it came with the 2nd revision of the UEFI (the new type of BIOS), and the third revision is available for update at the time of this post (rev. F3). Although I am planning to overclock the Intel Ivy Bridge Core i5 3570k, I have not gotten around to it yet. It does support higher clocked memory right out of the gate, so my purchase of the G.Skill 1866Mhz RAM was auto-enabled through the BIOS XMP profile, and confirmed through CPU-Z in Windows. I was surprised at the software bundles: You can turn on/tweak overclocking from inside your Windows 7 OS instead of backing out to your UEFI, 3TB hard drives are supported after running an update, you can software switch between integrated or discrete cards, control your mobo settings & OS through your iPhone, etc.

Cons: One major issue in Windows: two out of the six USB ports are controlled by the Intel chipset and are marked as "Keyboard/Mouse" inputs (the two USB ports directly under the Ethernet port). Although these two ports detect USB hubs and USB drives, they will not detect certain external hard drives or the iPhone. Also, the other 4 USB ports are run by a VIA controller, which is unsupported by an operating system "named after a cat and a type of fruit." Another issue in Windows: upon first install, the audio from the Intel HD Audio would stutter every few seconds. The issue seemed to have resolved itself when I also noticed that the Realtek audio was set to 96000Hz instead of the standard CD-quality audio of 41000Hz; so fixing this setting might have helped. Even with this oddity, I was impressed by the driver & software package for the audio, as it detects unplugging/plugging of ANALOG audio ports and lets you set up sound profiles.

Pros: The dual bios is as always, AWESOME. I have built previous computers with their new bios and it just makes the building process so much better. I overclocked this badboy with ease and I did not experience any technical difficulties. Have not played around too much with the Thunderbolt ports yet but will get to that a bit later on. Great board overall so far!

Cons: None so far. Would love the WI-FI cards they provide with the UP5 but I mainly do wired internet anyways.

Overall Review: I would definitely recommend this board if you are looking for something with a bit more features. You will not be disappointed!

Pros: First ever Gigabyte board and with some bad reviews I had second thoughts but many online review give this board two thumbs up. Color of board goes with my new case, ram, videocards and power supply. Fast and easy to set up, easy OC, lots on ports to plug my hardware into. Future proof with thunderbolt ports (not sure when I’ll need them).

Cons: Buggy USB back ports. I stalled Windows 7 Home and then run SP1 I had previously downloaded, after that reboot and installed disk drivers. Ran all windows updated but for some reason my 4 back USB ports stops working. I trouble shot the problem and uninstalled all gigabyte drivers and rebooted, ran updates again and then reinstalled all gigabyte drivers and USB started working again. No problems since and keeping fingers crossed.

Pros: Tough. High quality. Well thought out price/options. One head scratcher -see cons- but very happy with it. I under use it since I dont game, no oc. msata and Thunderbolt is a nice touch. Get one.

Cons: I use it to record music with Cubase 5 and after setup and all updates and many tweaks I could not record a single track without the asio cliping every 3 seconds. It was the EASY TUNE 6 bloat ware checking the system. Used for OC. For a program that is suppose to make your computer faster it sure interrupts the stability of the system. Not enough for one egg since it is easily uninstalled but it was a headache finding it. Watch out for that one.

Pros: Incredibly simple to overclock. 3D bios is strange but I quickly got the hang of it. USB 3.0, Dual SATA 6.0, onboard mSATA slot.

Cons: Still waiting for one.

Overall Review: I bought a 3570K, 16Gb (4x4) Corsair Vengence, a 120Gb mSata III drive, and Win7 Ultimate x64. It is staggering how fast this thing boots. Once I installed Windows and let it update everything, I cold started it. It booted so fast the BIOS screen didn't have time to ask if I wanted in! Cold boot to Login screen in less than 15 seconds! Even the Windows logo stopped before it had a chance to form the little flag! Reboot in less than 10! If I want into the BIOS, I have to start hitting DEL as soon as I turn it on. Right off the top, even at stock speeds I got a WEI of 7.6, and the thing holding me back was my dual GTX 560's. I realize that the motherboard alone isn't responsible for this type of speed, but this thing is definitely not holding anything else back either. Pair it with the right components and you too will be amazed. If you are an amature overclocker, there is a Windows program that comes with it that will do everything for you. You just have to decide how bold you want to be. For the uber-geeks, the BIOS has a thousand ways to squeeze out every ounce of performance. For me, the only BIOS fiddling I had to do was first, tell it to use the XMP profile for my memory, and second, I had to tell it to boot to the onboard mSATA drive instead of my storage array. Save and exit. Still haven't figured out what to do with the Thunderbolt ports, but the technology is still new and I'm sure the industry will quickly catch up. This is my first board from Gigabyte and I have to tell you I am very happy with this board. I don't think I will need to upgrade anytime soon, but I will definitely look at Gigabyte in the future.

Cons: I ran into a huge problem in which I thought I had broken the board. When inserting the processor, it appeared the triangle in the corner isn't correct. I panicked for 10 minutes making sure everything was right, I even checked the box to make sure the socket was right. Out of frustration I rotated the CPU in an effort to make it fit and it fell right into place. It seems like my boards line up was messed up. Either that or I'm really dumb and mistaked for something else.

Overall Review: I went with this board over its competitors primarily for the Thunderbolt. More devices in the future will be using it, so I thought'd I be prepared and get a board with one, let alone two. Otherwise it's a great board and I'm happy with it.

Pros: · Sturdy all black PCB construction · Great power for stable overclocks · mSATA · Dual Thunderbolt I researched this board as well as the UP5 but due to budget I chose this UP4 since there wasnt to many differences. Ive been running this board for about a week constantly without any issues. Gigabyte provides some great utilities on the disk and the disk even has an " Install All " option to save some time. Im looking forward to using the Thunderbolt ports as more Thunderbolt options become available and prices drop. Asus makes a board with single Thunderbolt port but this board gives you 2. I returned an Asus P8Z77 board to get this one and have no regrets at all.

Cons: · No clear C-MOS button ( that I seen ) but you can easily remove the battery to clear it. ( No egg removal for that since its not a problem )

Overall Review: My only other thought is if youre not going to buy this board I hope youre getting the UP5 TH or one of Gigabytes Ultra Durable 5 boards in the LGA 2011 socket line.