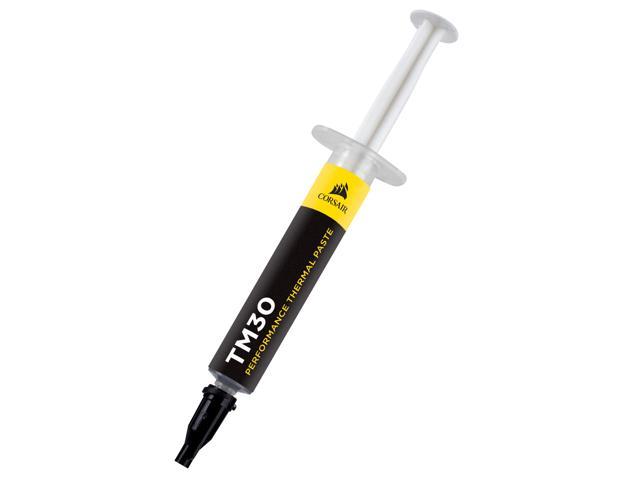 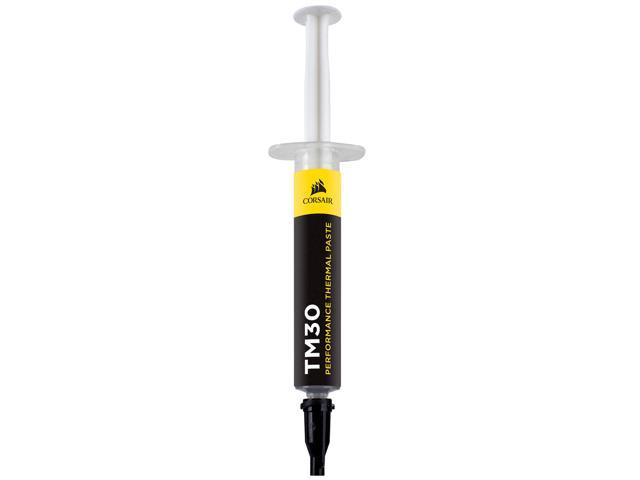 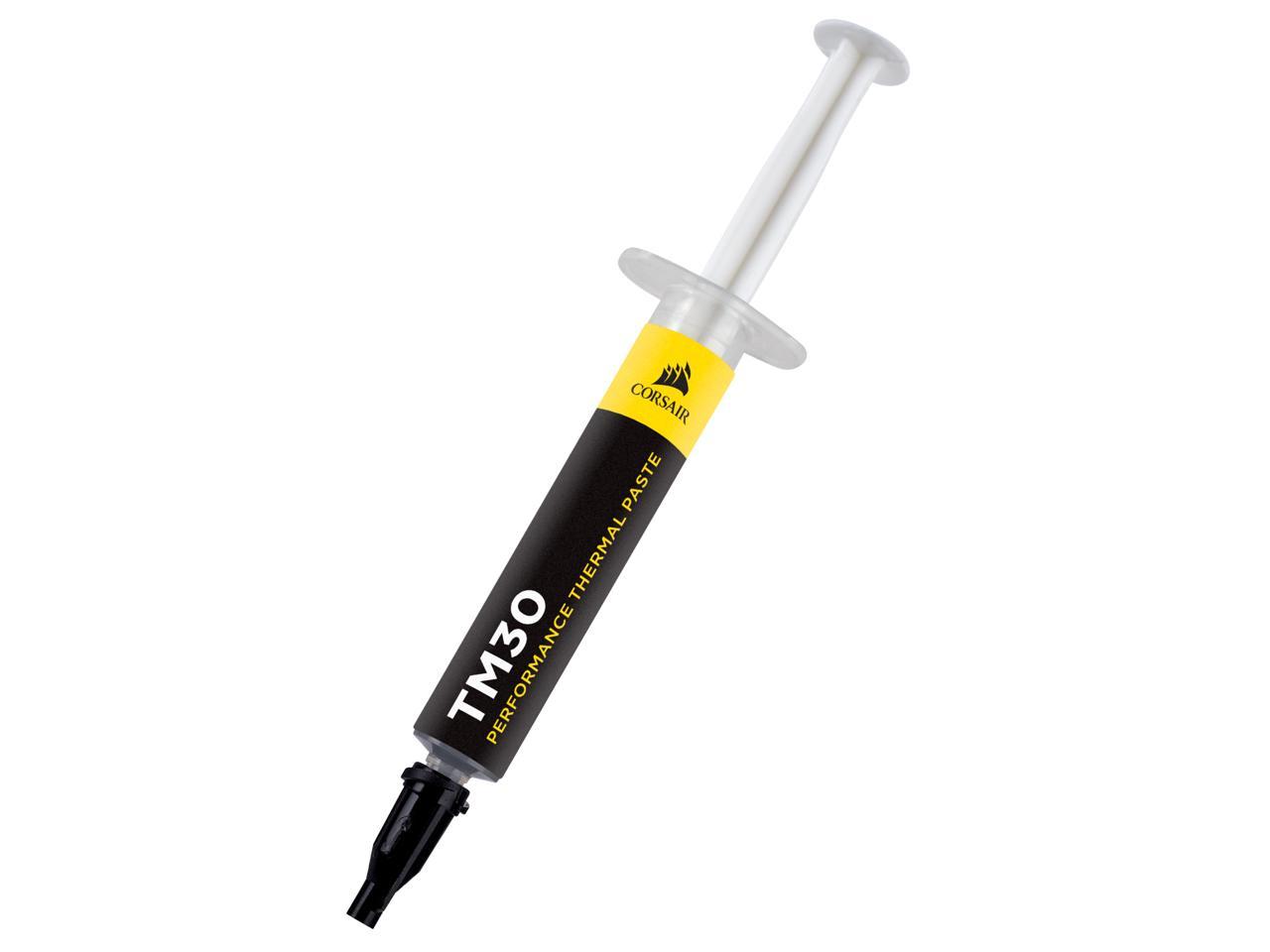 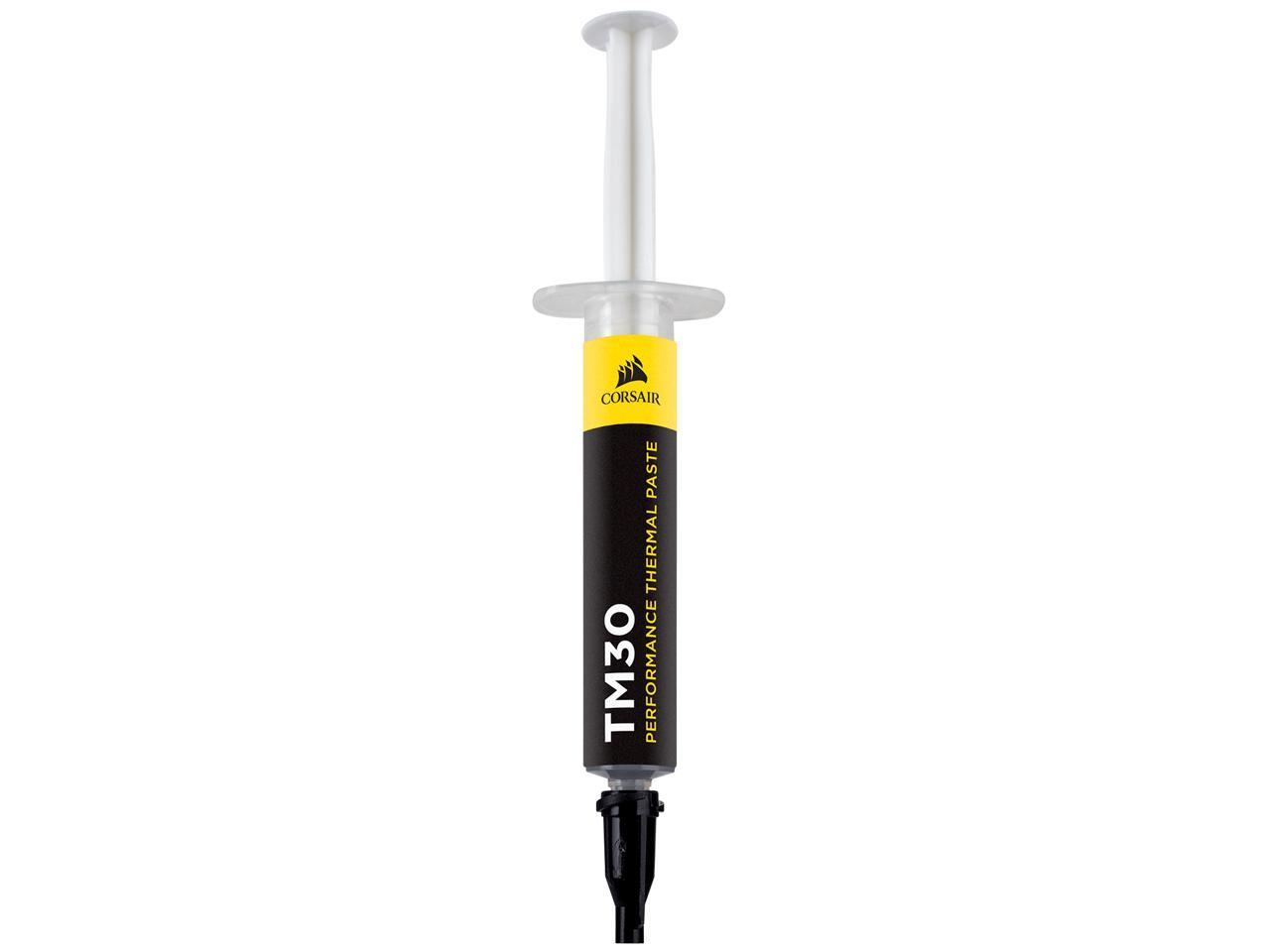 Cons: Overpriced for the specs, performance and quantity given.

Overall Review: 2-4C warmer than Arctic Silver MX and Gelid non-conductive pastes. Certainly not a deal breaker but both are better priced and give more quantity so it begs the question of what's the point of this paste. In the end, this would be great paste at $5 or so. As it stands you can get better for the same price and for two bucks more get far better results and more paste. I also would say that this is the same quality paste as you get bundled with stuff when it's in a syringe. Absolutely nothing special about this stuff besides corsair packaging.

12 out of 12 people found this review helpful. Did you?
Anonymous

Pros: Easy to apply, not too thin that it shoots out of the syringe. A little better cooling (~2°C) compared to the OEM paste on a cheap AMD cooler. Pretty easy to remove with just tissue and alcohol Seems to spread pretty evenly using the center dot, single line, and X pattern.

Cons: A little too stringy when applying, pull straight up instead of to the side when lifting away to prevent extra string on side of chip

Overall Review: Was doing a new HTPC build using a AMD Athlon 200GE. This is a low watt (35) CPU, so no crazy heat or loads, but even at idle, it was a little better than the stock AMD stuff. I did several installs of the cooler in taking and re-installing it with several different application methods, with all of them working fine (very similar temps, but by looks the center dot was best overall, even coverage). Only one I did not try was pre-spreading the paste, I have never had good results with that, regardless of TIM used. I think this is a good, general use product that will do what is needed for most all but the most extreme overclockers. I am adding this to the jar of TIM tubes that I have (OCZ Freeze, AS 5, and a multitude of others I have gathered over the years) and have gotten to the point that I just grab whatever and use it. It will be interesting to see how long this will last, I tend to not touch my HTPC cooler for years (my old one was on for 6 years running 24/7, the AS 5 on that was pretty dry, but still working).

2 out of 2 people found this review helpful. Did you?
Zachary H.

Pros: Very soft paste that is easily dispensed. Like other premium pastes, this is better than stock. They provide enough for a couple applications depending on how liberal you are on using it. Unlike many other stock pastes, it shouldn't dry out which is a great reason to consider getting some. After a month of typical gaming and encoding use, I inspected the paste and it is still as good as when I originally applied it. So far so good!

Overall Review: This thermal paste is comparable to other premium pastes and it will not let you down on its effectiveness. This product is very new but I don't expect any issues with its longevity. If you're building a new PC or are considering squeezing a little more out of a pre-built one, it's worth grabbing some.

1 out of 1 people found this review helpful. Did you?
Dean G.

Cons: Would have like to see their 1st be more aggressive cooling

Overall Review: 1st off this stuff spreads so easily it will help anyone apply thermal paste properly which results in consistent thermal contact. I use many "high end" thermal pastes and I must say this is about as easy as it gets for applying and on this system I had a 4 year old paste I put on it 6 months ago and it was thick, thick so decided to review the new TM30. I "installed" this two ways, 1st off by spreading and watched temps for 3 days and then I applied this in the pea spot in the middle and squished it out slowly and received identical results on a Intel I5 9600 running a 4, maybe 5 year old corsair 100 liquid cooler. ( either way you apply it lightly tighten and then give time for air and it to spread then tighten more, wait a minute then tighten down). My results were identical to a very "high end" paste that had to wait a week to get to it's best temps. idle is 23-25c and max when heaviest gaming/work load is 59 with push pull fans breathing from inside out as I will not push hot air into the box using 2 ugly silent pusher fans and two Corsair AF140 pull fans at about 75% . Again with most pastes I have to wait 3 days to 2 weeks for the paste to set and get best results whereas this stuff never changed past the 1st day showing it fills voids and lessens the wait and wonder while constantly watching temps. I can not make claims to it's performance on heavily overclocked systems but with today's cpu's they are already tweaked and you barely need to do anything so how can you not be happy anymore and no hassle with working out the perfect overclock, you plug and play efficiently now.

1 out of 1 people found this review helpful. Did you?
Michael D.

Pros: Electrically non conductive The low viscosity makes it easier to apply and able to be pushed into microscopic grooves that other pastes would not be able to get into well because of air resistance that would prevent some from getting in. Its as good as the more expensive metallic paste i had on but significantly cheaper.

Cons: Chemically unsure if its entirely 'safe' to use on cpus that have had certain other pastes applied.

Overall Review: Now I am sure my 'con' sounds confusing but ironically ALOT if not most of metallic pastes use microscopic or nano aluminum particles. which is one thing that micro zinc oxide should never be combined with especially in a hot environment. there may be residue around, if properly cleaned I imagine any reactions should be minimal. But you cannot really clean all of an old paste out of the micro grooves that otherwise may create some gases that may leave air gaps over time if incidentally mixed.

1 out of 1 people found this review helpful. Did you?
Anonymous

Cons: None? If I had to name one i'd say a little over priced for the quantity.

Overall Review: Everything worked great, no issues with two applications. I normally use Arctic or Zalman...and this was closer to the Zalman in terms of ease of application. In terms of ease of use, a little easier than ceramic and little harder than a looser paint on zinc. Performance wise, it was on par with most of my thermal compounds.

1 out of 1 people found this review helpful. Did you?
Anonymous

Pros: This is a much thinner (aka low viscosity) paste than most other brands, which makes is spread thin more quickly and easily. It fills in microscopic bumps in poorly milled, lower quality heatsink contact plates, which is great. It’s simpler and quicker for an inexperienced user to see if they applied too much as well. The manufacturer doesn’t state anything about a break-in period where viscosity changes and the materials sort, etc like other more chemically varied pastes on the market so I assume it doesn’t have one, which is nice. Also, it’s non-conductive and non-toxic. In comparison tests against Arctic Silver, this paste unfortunately didn’t win (see next section) but it did come close enough to be a consideration if you’re not looking for the absolute best cooling solution, especially considering the lower price. It was, after all, REALLY close and this paste is thinner and easier to apply in some cases. Overall, this is a more cost-efficient, easy paste for applications where thermal performance just needs to be acceptable, making this the #1 choice for re-applying a large volume of stock coolers, etc and because of its simplistic, homogeneous materials, it should stay stable longer than high performance pastes. Because of that, I’d considering it best in its specific class and it easily gets a 5 star rating.

Cons: I saw that this paste is solely zinc oxide while its competitor in the test I ran was Arctic Silver, which uses around 12% pure silver in 3 various sized isomer molecule arrangements plus zinc oxide, aluminum oxide, boron nitride particles, and micronized silver. So I assumed this had absolutely no chance. I was wrong but it certainly didn’t win. I tested this paste with a blazing hot 95 Watt Phenom X4 840T processor maxed out with Prime95 using a copper cored tall style stock AM3 cooler. Using Arctic Silver I hit 48.5 degrees C max in a 15 minute test. Using this paste in the same circumstances I saw it hit a max of 51 degrees C max. Their own packaging claims it beat lower quality paste by less than 4 degrees Celsius on a 150 watts CPU, which is very unimpressive. Generally, I’d say their own numbers mixed with mine places this precisely in the middle for best quality, most effective pastes but to be fair, the price tag also places it there and it was close enough, I wouldn’t mind using this for most CPU application except extreme overclocking.

Overall Review: Even though I used my paste immediately out of the box without letting it sit around, the first application was pretty sorted/separated and I had to wipe it off and re-apply it. So do watch for that, as it is a common problem with almost any brand. Also, don’t store it vertically or it will keep occurring.

6 out of 7 people found this review helpful. Did you?
Robert M.

Pros: Less viscous than most other pastes I am familiar with. This includes products from EK, XSPC, Thermal Grizzly, Cryorig, Gelid, Xigmatek, Arctic, etc. I would say it has a consistency similar to the paste included with Cooler Master products. Spread very easily and evenly just from pressure of applying the heatsink; no spatula necessary. Temperatures within a couple degrees Celsius of liquid metal in my wife's laptop sporting an aged i5-3337U Non-conductive just in case you mess up and get this stuff somewhere a short would be possible. Non-toxic just in case your little ones get their hands/mouths on it. 'High-Stability' claiming to last for years without drying up.

Cons: None to speak of, it did what it was supposed to do.

Overall Review: Not that the standard syringe is bad, but someone should come up with a better application device. Nearly everyone who has used one of these has whoops-ed WAY to much paste onto something. Thermal conductivity rating isn't advertised as over-the-top with a figure of 3.8 w/mK. Corsair's product page is pretty straight forward without any razzle-dazzle; this is also good. Some clarification on what exactly the 'common thermal paste' they are referring as a comparison would be nice. I'm curious if this is the same material that Corsair has had pre-applied to their products in the past. I am looking forward to seeing this show up in a professional reviewers thermal compound round up to see how it fares against the seasoned veterans.

4 out of 5 people found this review helpful. Did you?