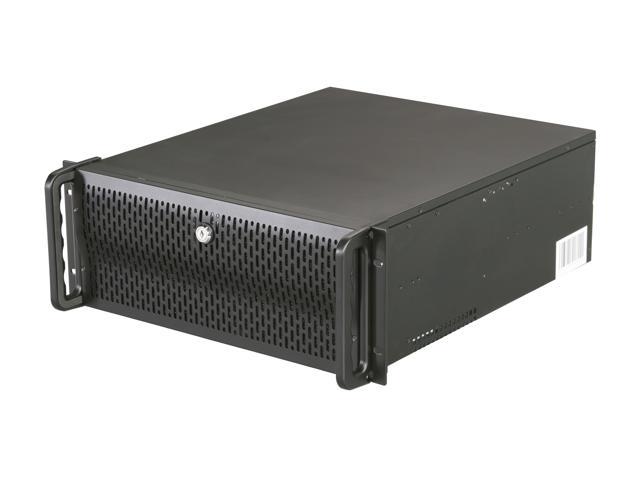 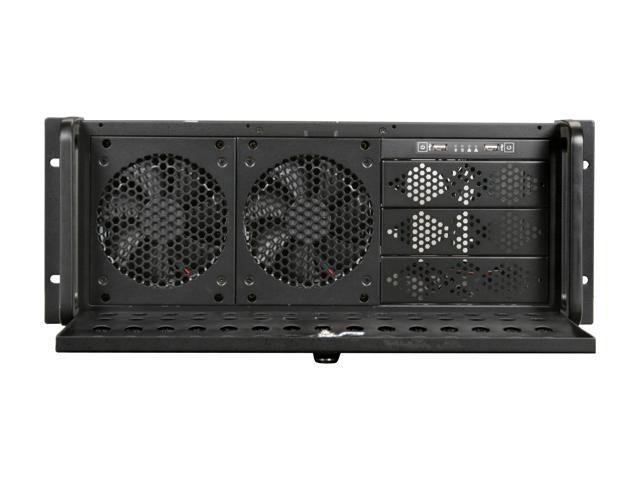 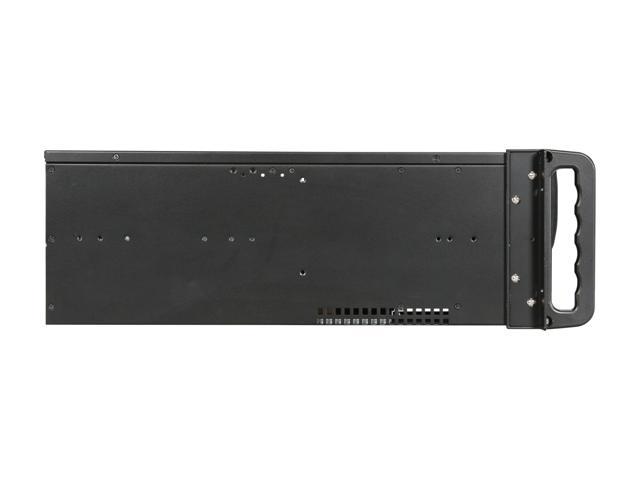 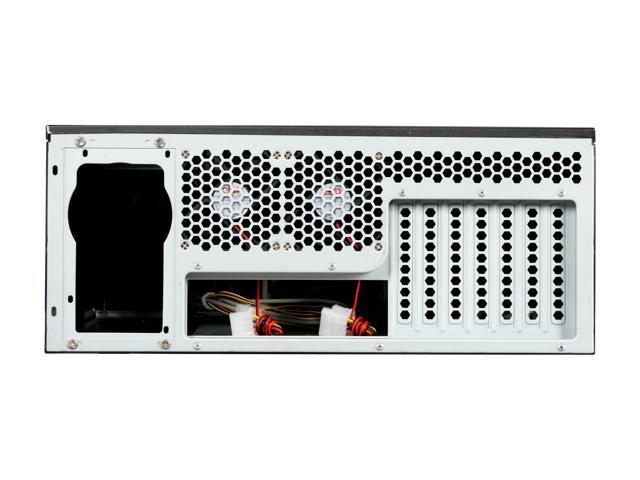 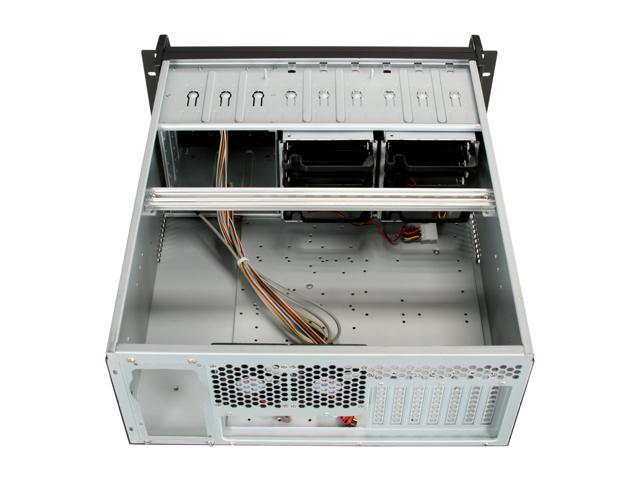 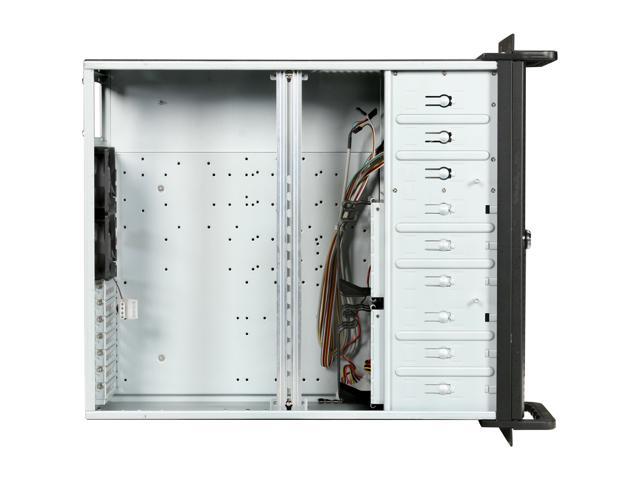 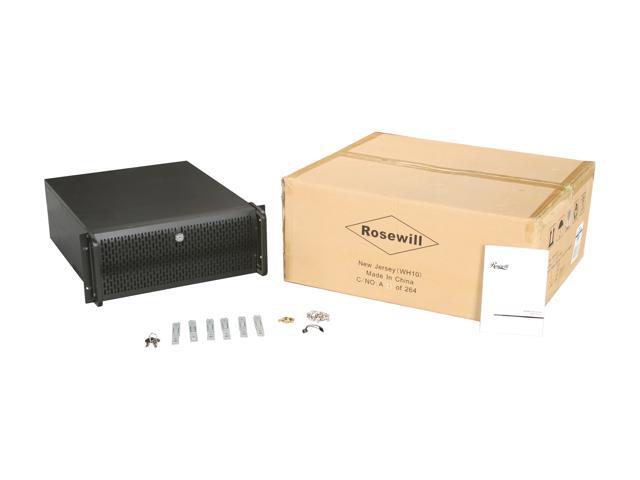 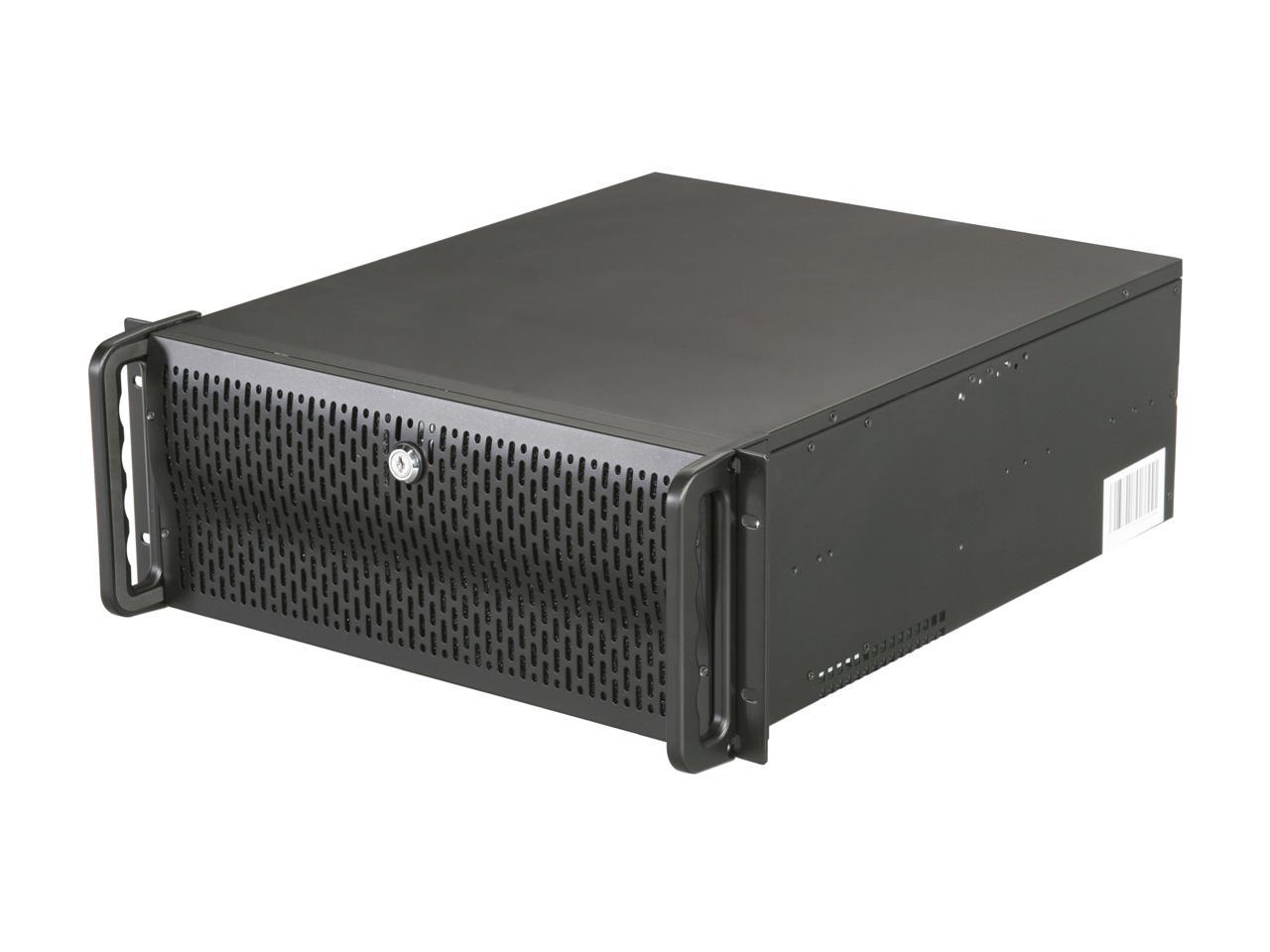 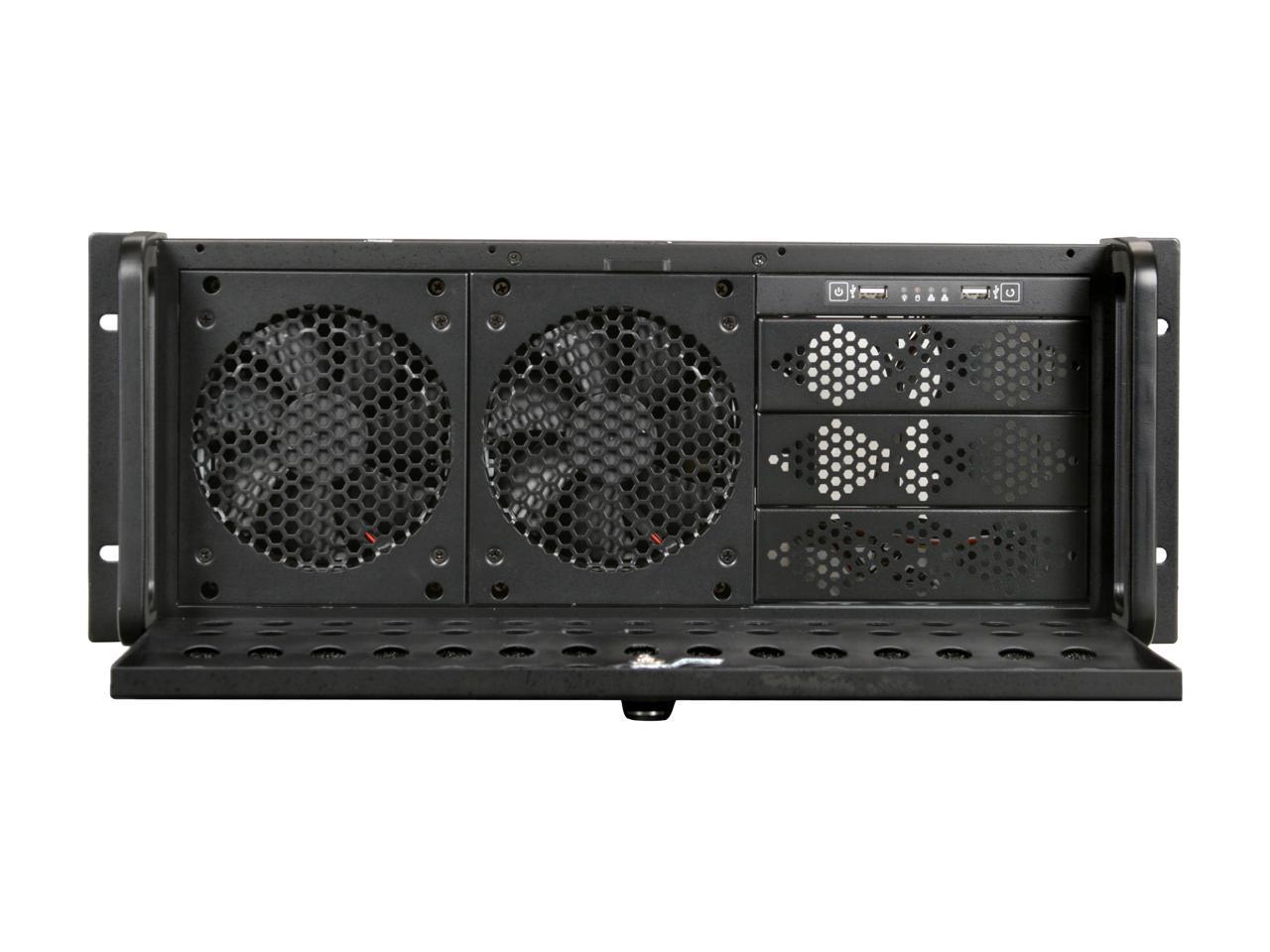 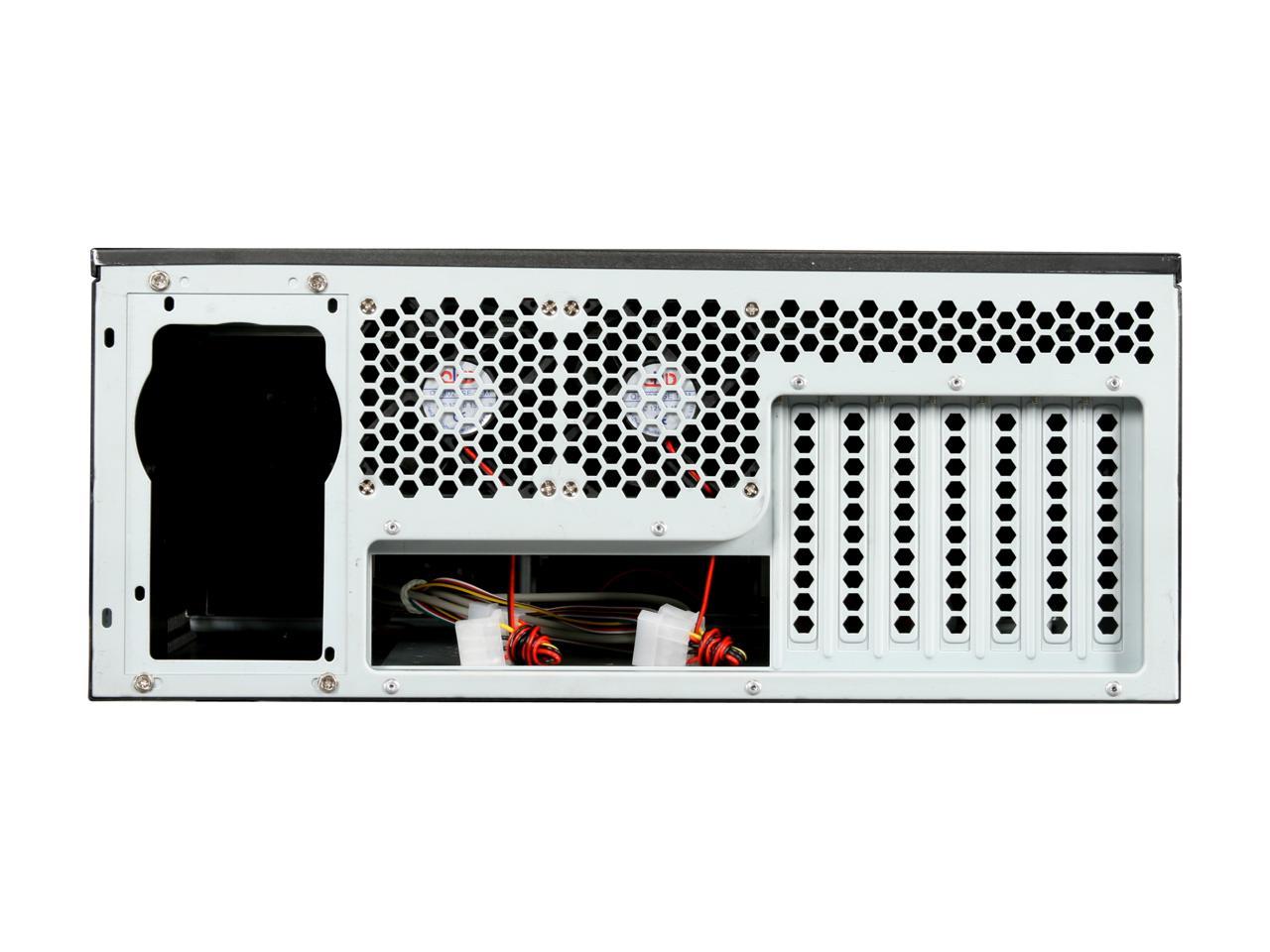 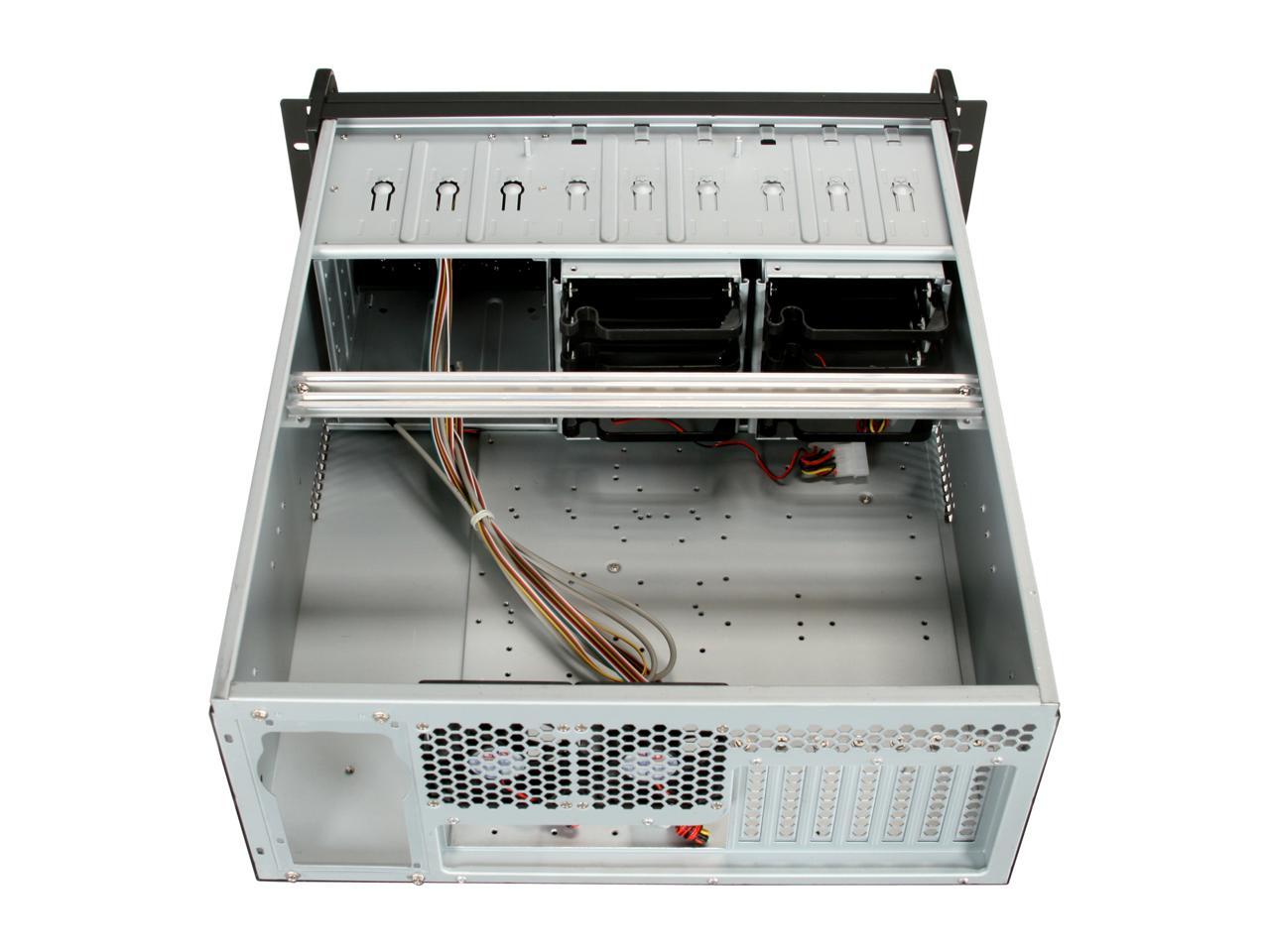 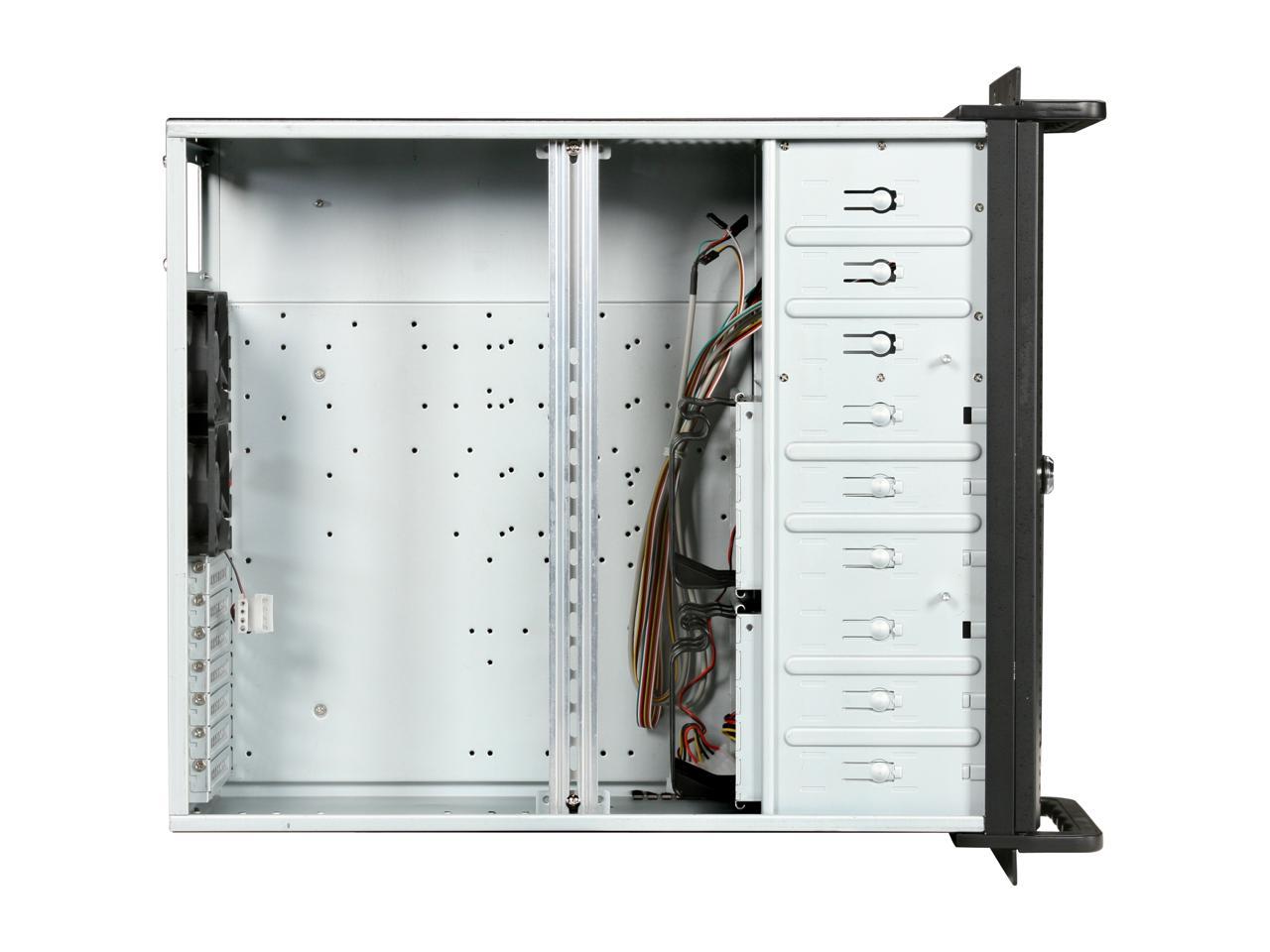 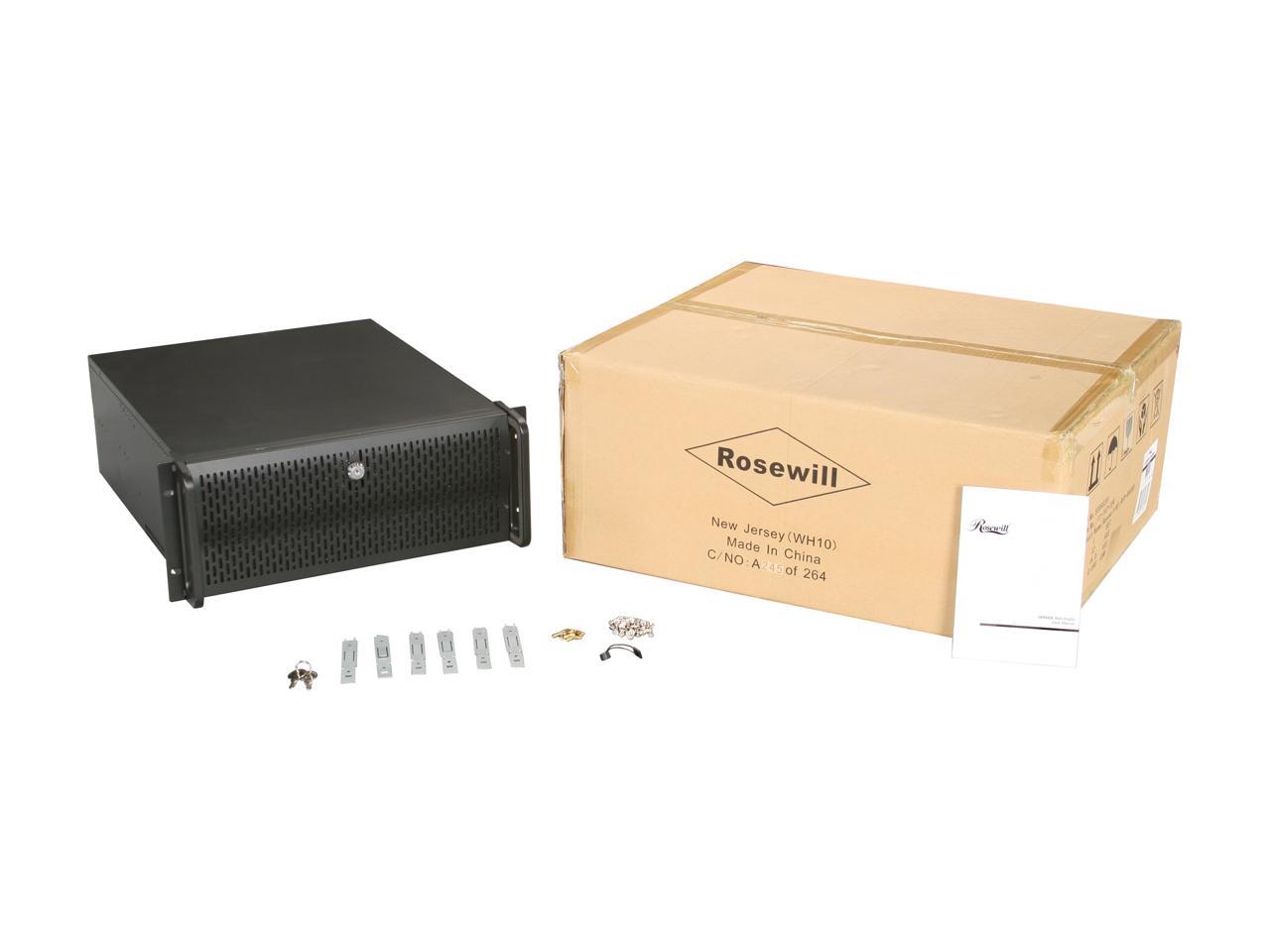 Make use of the available room by installing up to eleven internal 3.5" HDDs, seven expansion slots, one PSU and still have room for up to a CEB (12" x 9.6") motherboard. Includes four cooling fans; two 120mm in the front and two 80mm in the rear to provide excellent cooling for continuous use and optimum airflow. Learn more about the Rosewill RSV-R4000

Pros: Very nice multi-fan 4u server case for rack mounting. Very, very quiet due to large slow fans. Will fit any mobo, PSU and HDD combination. Have one rack-mounted with an i3 setup and another with a dual-Xeon 5504 running VMs. Both servers very quiet, which was my goal. And it is a joy to work inside this case -- like working under the hood of a '55 Chevy -- space a'plenty. Nice.

Cons: The handles and rackmount "ears" are about 1/8" taller than the 4u case itself. This means that the case takes up 5u, leaving an air-gap between servers. Removing the handles means removing the front cover/air filter, and the mounting "ears" are still too tall. Sadly, the rails for this case (which *might* address the above) are discontinued.

Overall Review: I will buy more, and am trying to figure out a solution to the rack mounting problem.

Pros: -Case arrived with good packaging. Structure of the case feels solid. Adequate cooling and plenty of room. -Drive cages snap in firmly, and are easy to get in and out of the case. -Decent sound. Not too loud. I can hear my drives seeking over the fans.

Cons: -Drive sleds. These take some manipulating to get drives to snap in. I managed to force a few of the grommets out during this process and just about gave up on it (a few are damaged still but I got them in). Other comments suggest tweaking them a bit, but when you first try to put a drive in, you're most likely in for some fun. -Top tray is held on by 4 tiny screws. Smaller than a motherboard screw tiny. Would have been nice to have maybe 2 big screws at the back. -Fans are molex only. Would be nice if they could natively go to the motherboard. Also would be nice if you could mount fans to the support bracket in the middle.

Overall Review: I haven't (and don't plan to) put this in a rack, so I can't comment on that aspect. I bought it because it had plenty of space for drives, and I liked the design. I wanted something that was sleek looking and can easily be put away, or racked in the future if I change my mind. Overall, it's a great case and looks (and feels) like it'll last me a while.

Pros: 1.) HDD Trays and Modules not expected at this price point. 2.) Lid comes off easily and doesn't have push tab locks on it. 3.) Has foam insert to filter air coming in from the front of the server. 4.) Locking face plate. 5.) Tool-less mounting system for 3.5" and 5.25" drives.

Cons: 1.) Rack mount handles are taller than 4U so it takes 5U of rack space... what were they thinking when they came up with that idea. 2.) HDD Trays are a pain to use with poor quality rubber dampeners. 3.) Power button and Reset button wiring was labeled incorrectly. 4.) Reset button sticks occasionally. 5.) Rough finish on some edges. 6.) Case is on the shallow side in terms of depth.

Overall Review: I really want to like this case. It was on sale at a price I couldn't believe so I figured it was worth a shot. For the money, I was impressed at first with what they delivered. However, after installing everything into it, I just keep noticing faults and shortcomings due to the price point that make it less impressive when compared to some other cases I've worked with. I still don't think you'll find a case that offers a better value, but I can't say that I'd buy it again.

Pros: 1. Has enough space to fit all your components. 2. Good airflow. 3. Room for expandability. 4. Great Value. 5. Rail for fans, I mounted 4 HP deltas.

Cons: 1. Build quality is 4/5 its not bad but its not server grade either. (comparing to HP MSA or Dell Poweredge) 2. Front door has weird wave shape that makes it hard to lock if you install hot swap drives. 3. Side panel uses small screws that are located on the side of the chassis versus the back.

Overall Review: Great starter case with awesome quality for the price/features, dont hesitate to order this case. Also uses standard ATX PS placement which was a requirement of mine.

Pros: Good price, strong case, plenty of room for all your hardware.

Cons: Specs say it will mount a standard ATX mobo but there are no holes to line up with a 12" X 9.6" front 3 holes. Removed the standoffs and used nuts to mount to the mobo to keep it level.

Pros: Locking front panel is easily removable. Hard drive/fan modules easily removable. These look great stacked or at least in pairs. Love the external bar code serial number. Great to document if you build multiples and use for build/warranty and or theft tracking/reporting. If you have ever had to do a police report on stolen property you know cops ask for serial numbers and shaking your head and saying it was a "clone case" means nothing. I mentioned this as a pro because others mention it as a con.

Cons: Not quite as much room for cooler as one might expect. Since the 4U case is (about 1") more shallow than a standard mid tower case please take this into consideration if you use upright coolers such as Corsair A70. Even the stock i7970 Intel cooler comes close to topping out. Specs for heat sinks tend to tell you the dimensions of the heat sink but not always how tall it will sit when mounted. The A70 would require heat pipe holes through the top cover so try to stay away from anything much over 5" tall. Lack of external 3.5" Some folks still use floppy and some use those card reader input panels sized for 3.5 external. None of this is bad enough to drop an egg, just be aware if important to you.

Overall Review: The lockable front panel is easily removed when not needed but do remove it before mounting as the rack ears must be removed first.

Pros: Very solid case. Nice and cool. Lots of fans. Aside from the cons below an awesome deal.

Cons: As others mentioned the handles and ears extend beyond the 4U size. I didn't notice this until driving several hours to install this in a nearly full rack. What were they thinking?!?! Lots of time wasted reordering a server stack to accommodate those big handles/ears. The hard drive mounts are also a little odd, and thermally insulating. Not a problem with those big fans up front, but with fans off drives run especially hot. It does have rubber vibration isolators though, so hopefully that will extend the drive life.

Overall Review: A great case if you don't have/are not planning to have a full rack. Maddening if you do.

3 out of 3 people found this review helpful. Did you?
Manufacturer Response:
Dear Valued Customer, For the handles being longer than 4U size, we can send you replacement handles that will be shorter and be 4U size. Please contact the Rosewill support team either via phone at 800-575-9885 or via email at techsupport@rosewill.com so that we can assist you with your issue. Thanks, Rosewill Customer Care
E. /.
Ownership: 1 day to 1 week
Verified Owner
A little wobble3/19/2011 7:27:41 PM

Cons: Someone at the design studio or factory needs to be fired...who ever mis-labled/mis-wired the on and reset cost me a few hours of head scratching. Heck, my reset doesn't even work but the on button does so we're okay. CDROM bay is way funky. Lots of gnashing to get mine in.

Overall Review: My first actual build (3 Shuttles XPC btwn) in years. AMD -love their stuff. The 1100T does really well on a ASUS MB inside this case with 16 GB or RAM.