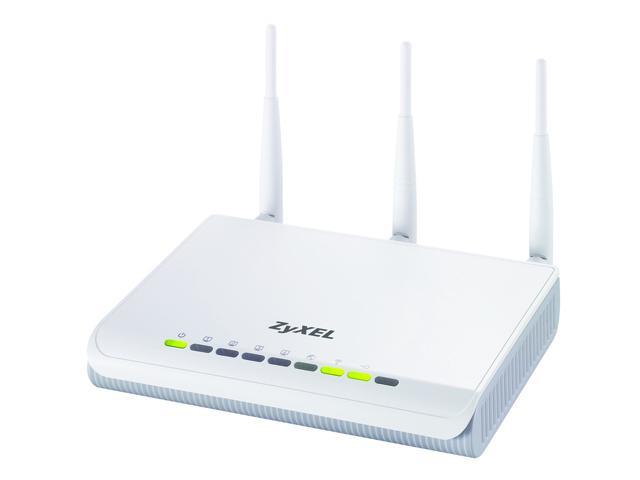 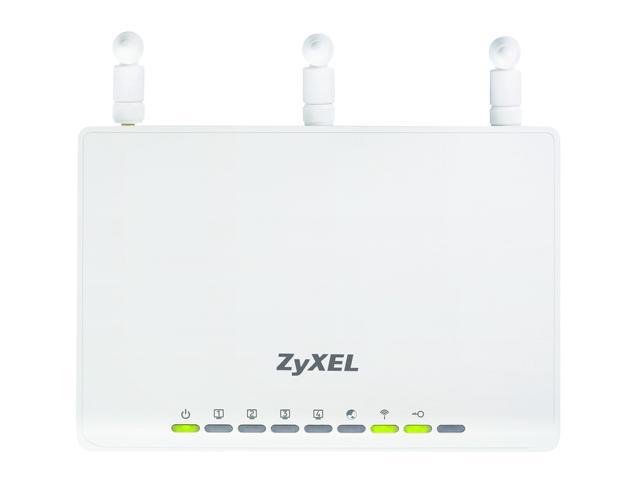 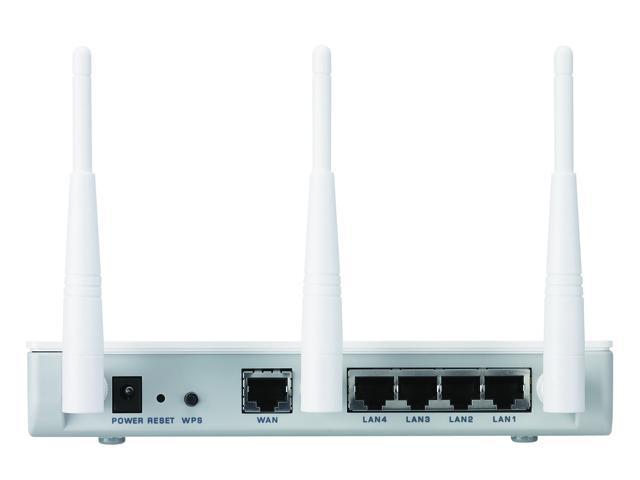 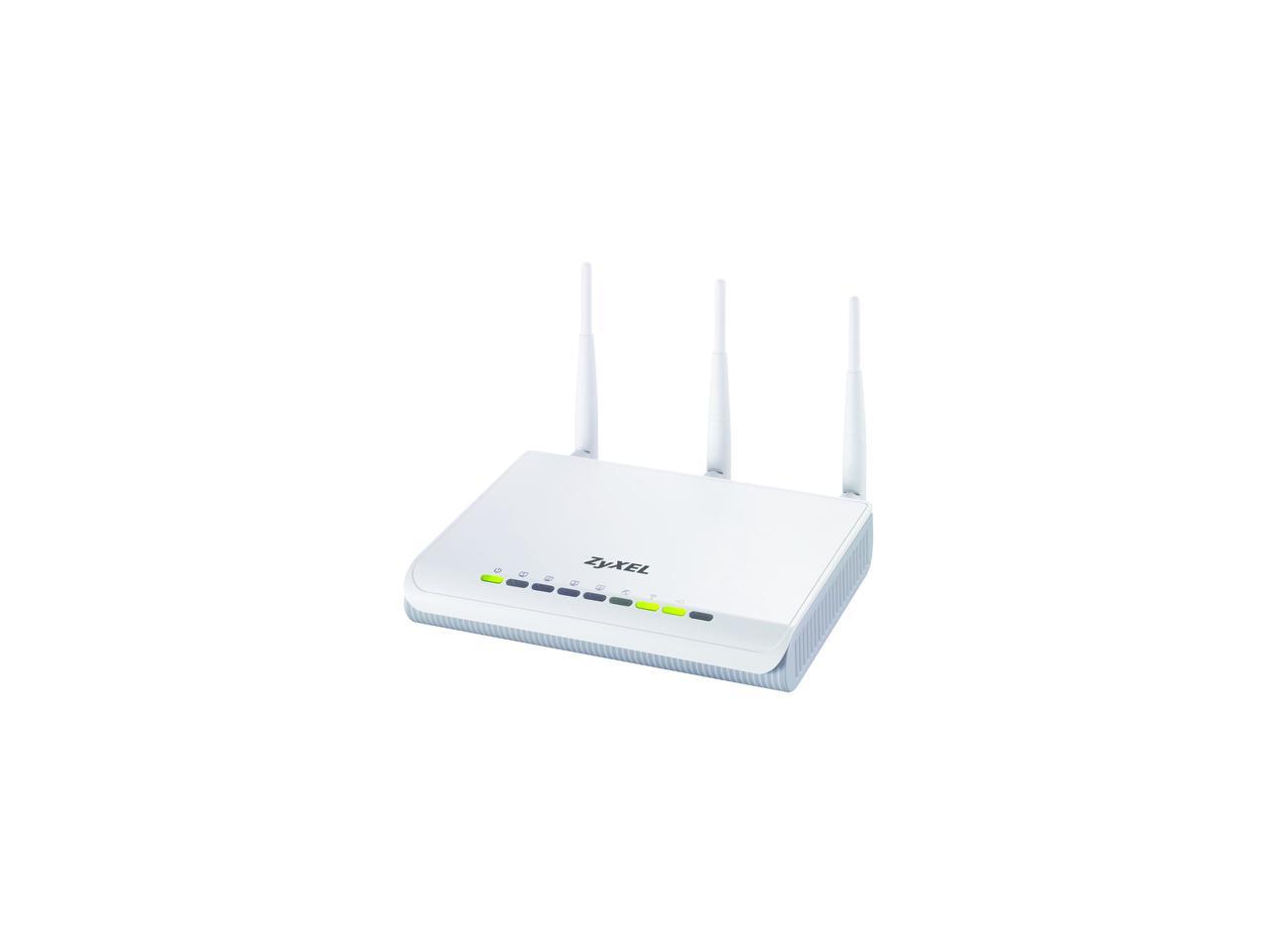 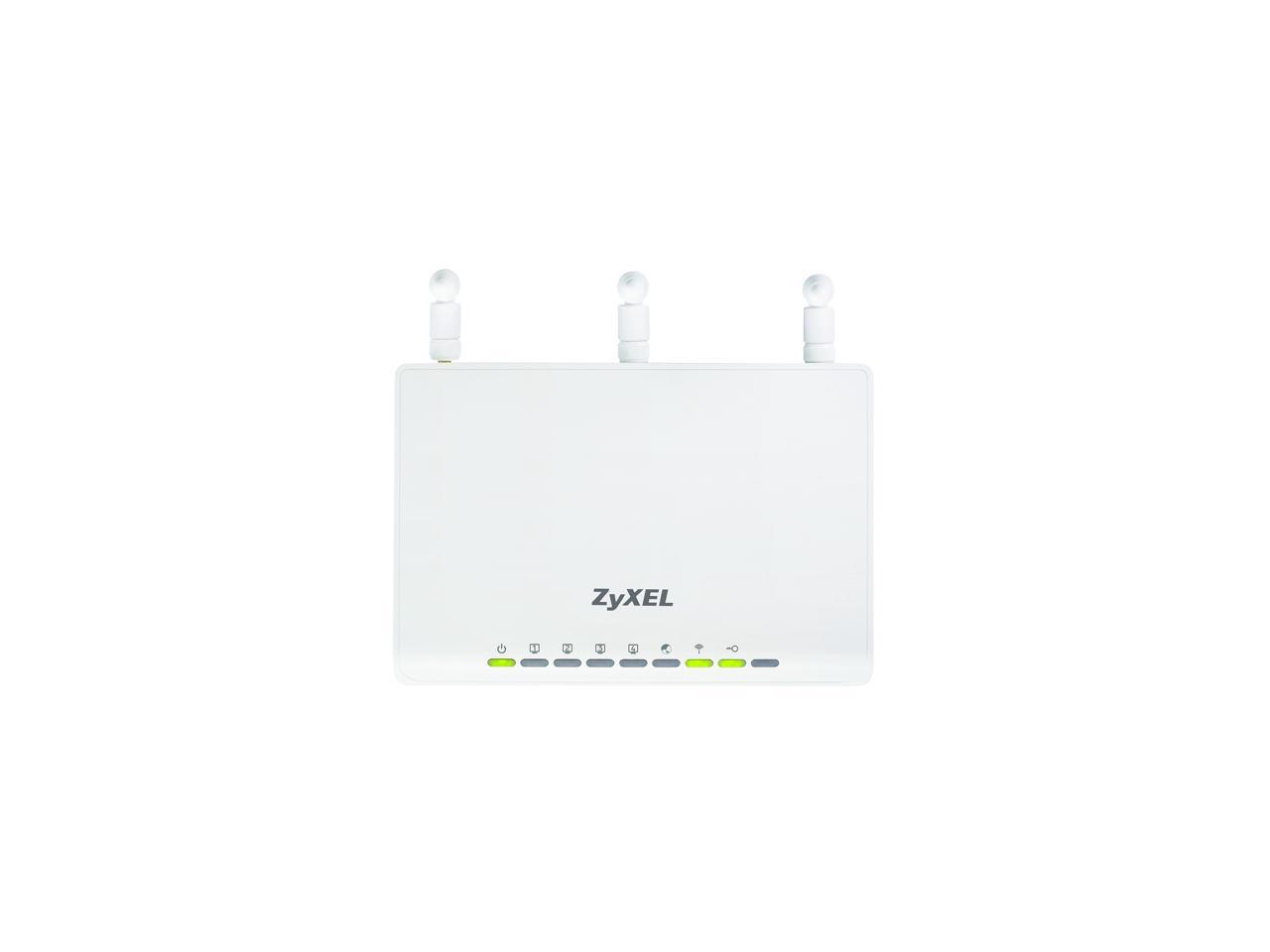 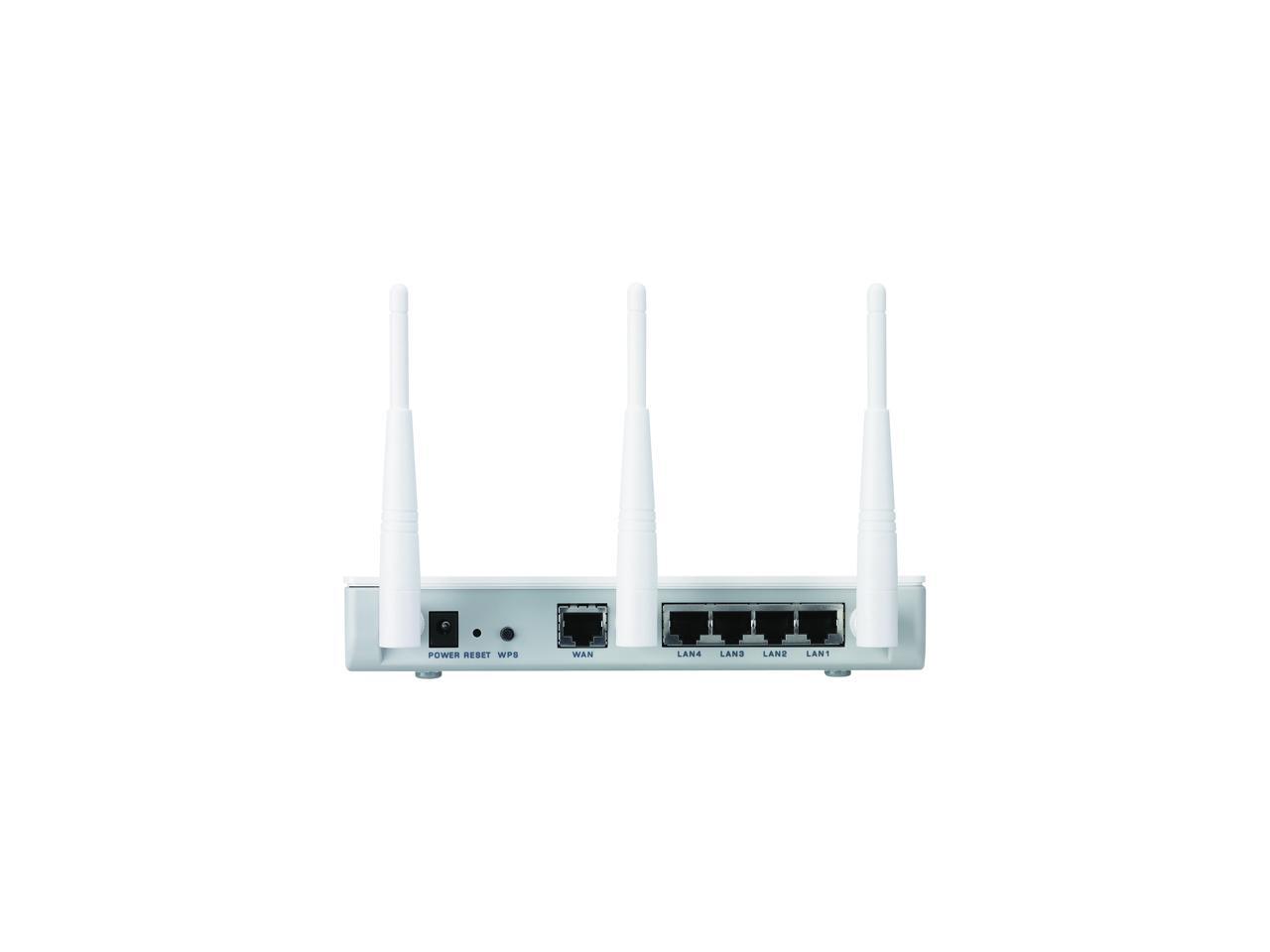 (16) Write a Review
OUT OF STOCK.
Fees for brokerage and duty included in price.
Specs
Reviews

Learn more about the ZyXEL X550N

Pros: Gigabit Ethernet, excellent range, and it's a ZyXEL. I've had good luck with this brand and bad luck with others. No need for the included CD... just open a web browser (Windows/Linux/Mac) and configure. Easy as pie. Our wireless printers, Nintento Wii and DSi's connect fine in WPA2-PSK mode. I decided to replace my aging (and classic) X-550 with this. I expect the same out of this new router. When I shut down the X-550 to replace it, it had logged 410 consecutive days of uptime. Never needed a bounce. It still works, just wanted to mess with Draft 2.0 N speeds... impressed.

Cons: Gets warm... seems warmer running that the old X-550

Overall Review: I read about the drops with the original firmware. Watched the ZyXEL site for the March 27, 2009 release of the firmware to fix the issue. Works like a champ. I knew ZyXEL would get it. Feel like they take great pride in their products and have only had positive experiences with their support in the past. Oh yeah, did I mention you can telnet into the router (like all ZyXEL's I've used).. Not that most would use it, it can come in handy.

Pros: Easy to configure, good range, looks nice for customers. I setup this in Access point mode. It worked like a charm. :) I also setup an expensive Linksys router in accesspoint mode at the other end of the house. You can walk throughout the house and you always have good signal... However, this has better range than the linksys and is much less expensive. I wish I had bought 2 of these routers. I'm buying these from now on.

Pros: Install was pretty simple, even using the Advanced configuration. Very fast wired, fast wireless. With supported wireless cards, connections reach 300mbps. Computers in the basement have no issues connecting either. Detailed user guide is on the accompanying CD.

Cons: I was having some periodic wireless disconnects from time to time right out of the box. Tried looking on ZyXEL's website for a firmware update but none was found (atleast at the places you would normally look) Then of course, after I googled it, I was able to find a firmware update, that fixed the disconnect problem I was having. It's been great ever since.

Overall Review: I would have given it a 5 egg rating but because of the disconnects and also because it was pretty hard trying to track down the firmware update. In fact, I don't even think the firmware is specifically meant for this model ZyXEL X550N, but it is meant for a very similar model. But it worked fine for it. Just make sure you search for this model and firmware in google.

Pros: Runs cool, very fast wireless and great coverage. The lights on it are not bright! The Media Bandwidth Management(MBM). Gigabit ethernet ports.

Overall Review: The MBM is far superior to the stream engine on the other guys routers! I've been told by family members that they are seeing better ping times and faster surfing. Everything just seems to work smoothly compared to my previous wireless router which used the stream engine.

Pros: Absolutely none, DOA / nothing personal, Newegg excellent to deal with as usual.

Cons: Did not work, period. Wireless did not connect at 3 feet, firmware update is useless, absolutely no difference. For reference my X550 G Band has a solid unwavering/never drops or resets at 90YDS. yes Yards (shot with a laser rangefinder) I have seen the same issues with other N band units.

Overall Review: I am amazed as the owner of a X550 and a P600-H series ADSL modem, and having installed numerous Zyxel routers (ie. experience with the quality) that someone could a decision so STUPID as to replace a unit as rock solid as the X550 with this flawed N Band unit. Careful Zyxel your ruining a good reputation, those of us who work with this equipment will respect you far more if you stand your ground with top shelf G Band units that Work, Period! than if you just jump in and yell me to with a poor working N Band unit.

2 out of 3 people found this review helpful. Did you?
Manufacturer Response:
Dear Sentinel, First, let me thank you for your recent purchase of ZyXEL’s X550N “11n Gigabit Wireless Router”. We’re very sorry to hear that you received a defective unit. Rest assured that we, here at ZyXEL, stand behind our products with an unbeatable two-year warranty and a US-based technical support team to help with any after sales product issues. We would like to take this opportunity to invite you to contact our Technical Support at the numbers below and we’ll be more than happy to ship you a replacement unit as needed. ZyXEL US Tech Support Contact information: 1.800.255.4101 Option#5 support@zyxel.com Best Regards, ZyXEL’s eCommerce Sales Team

Pros: Gigabit switch. Wireless N that had good coverage. Interface of software. Looks of the unit.

Cons: This unit would over heat to a point where the plastic on the bottom of the unit is discoloured yellowish due to the board heat. Internet kept dropping out for my mobile devices, it would lose negotiation with dhcp. Ethernet was also experiencing wireless drops as well, not as frequent as the wireless. Now my unit has finally stopped working. The power supply is working, but the unit would try to boot up and just die. If I disconnect and connect the power, it would come on and repeat the process.

Overall Review: A shame that the unit has excellent specs, but the quality of it , killed its luster. I would not get a unit from ZyXel again. It worries me that it has a serious heat issue, I even think other could be a fire hazard. I also have a gigabyte switch as well, same heat issue but worse.

Overall Review: Forget my previous review. A few days later, the router began to lock up regularly, losing wireless connectivity and the ability to access the UI. this occurred even overnight when the only traffic was NTP updates and DHCP lease renewals. Upgrading to the latest firmware had no effect. Sent it back.

Overall Review: I bought this unit on the strength of my good experience in the distant past with Zyxel dial-up modems and after trying two TP-Link TL-WR1043NDs that constantly dropped wireless connections, among other problems. I've now had this router running continuously for 1 week with absolutely no dropped connections or other problems. Setup was straightforward via the browser interface and the unit provides a good wireless signal throughout my house. Unlike many of the other consumer level routers, it has the useful ability to log traffic, not just administrative events and to log to a syslog server. It also saves each configuration backup with a different filename so you can easily keep multiple different ones. This router seems to have been designed by people who are used to designing pro-level equipment. I'm running the 3/2009 firmware and don't know whether I'll bother to upgrade to the 9/2009 version since all is working well.