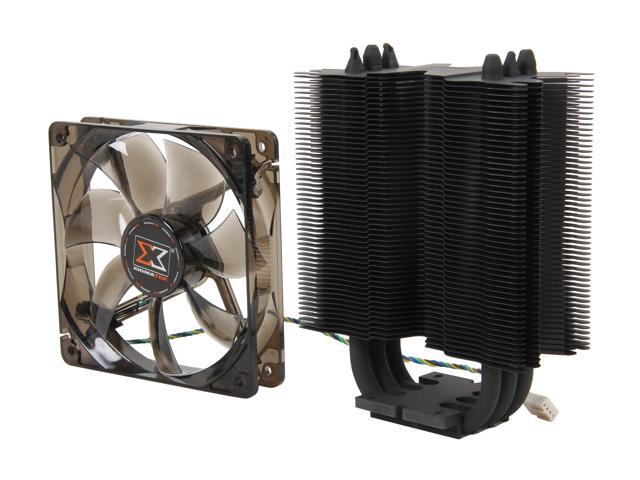 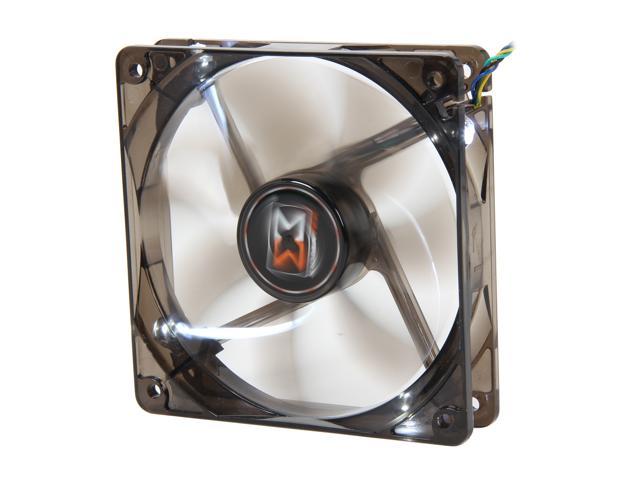 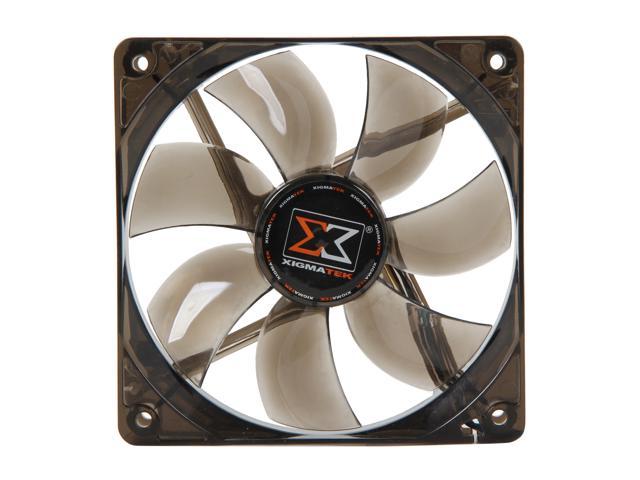 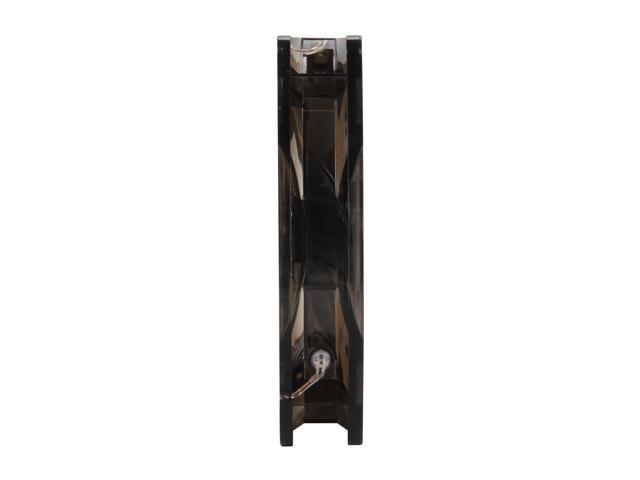 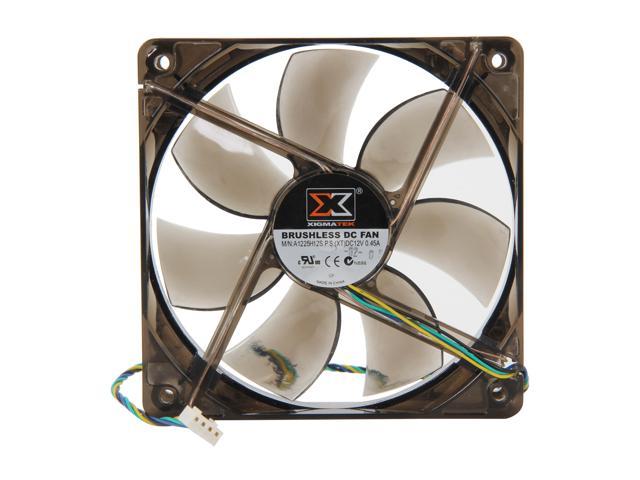 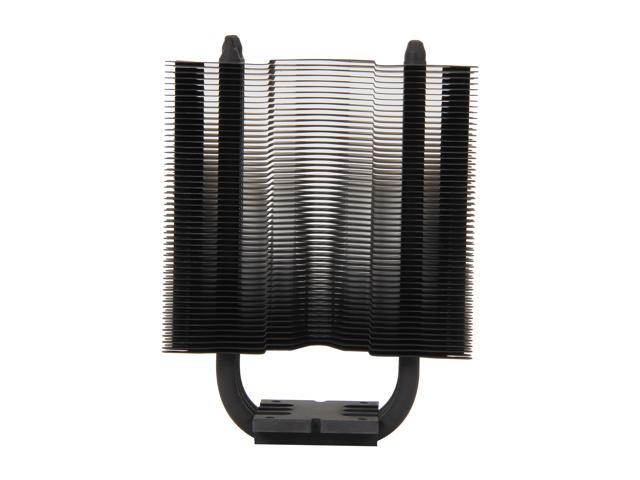 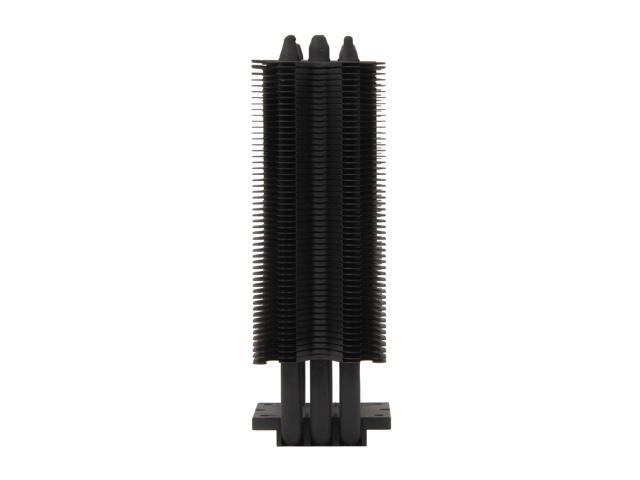 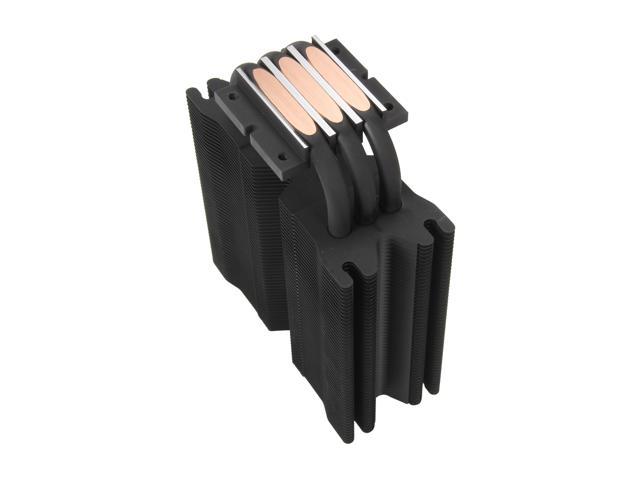 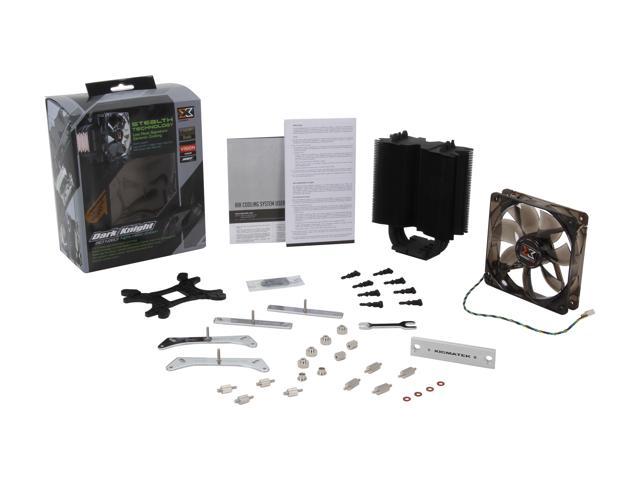 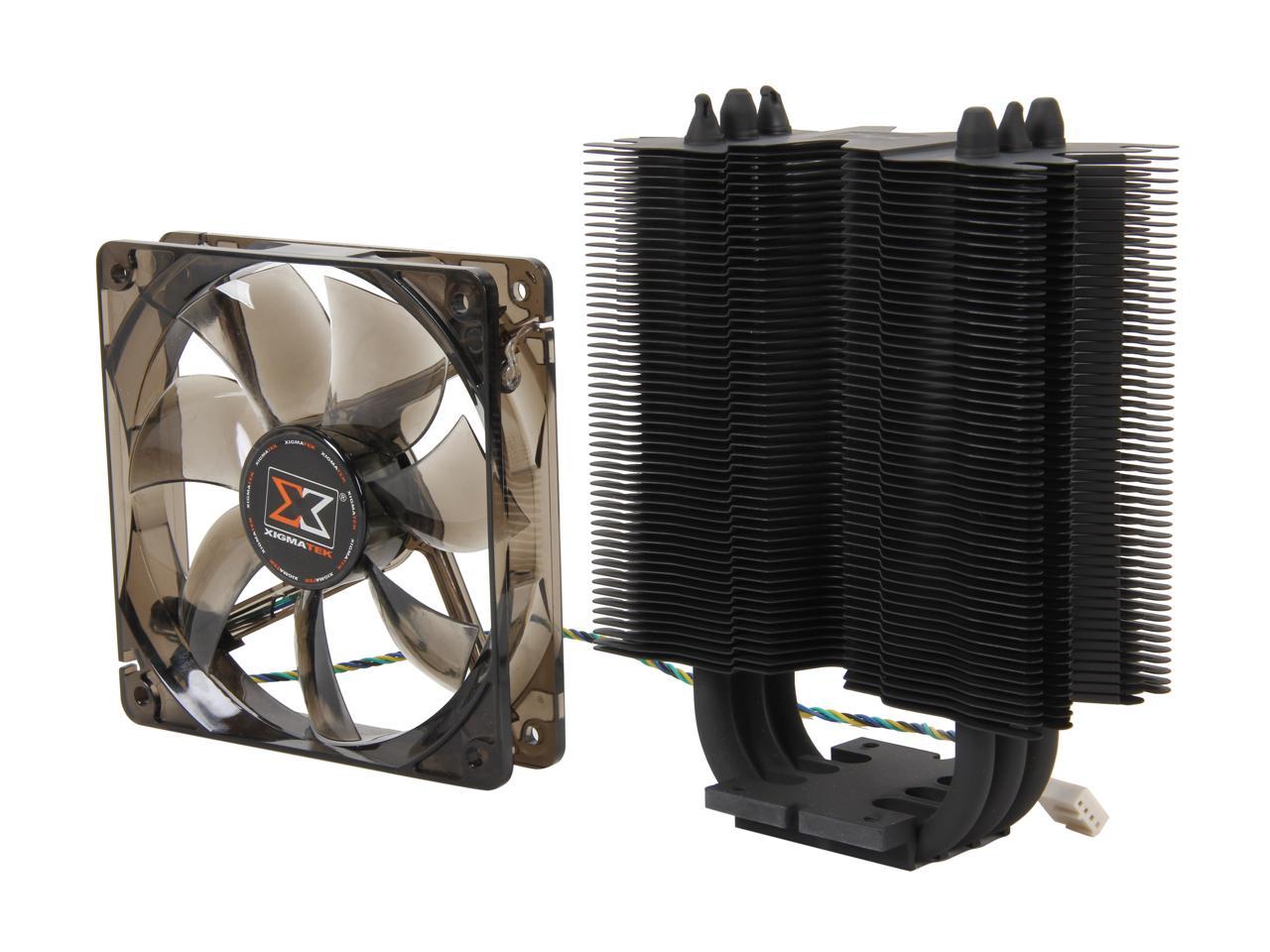 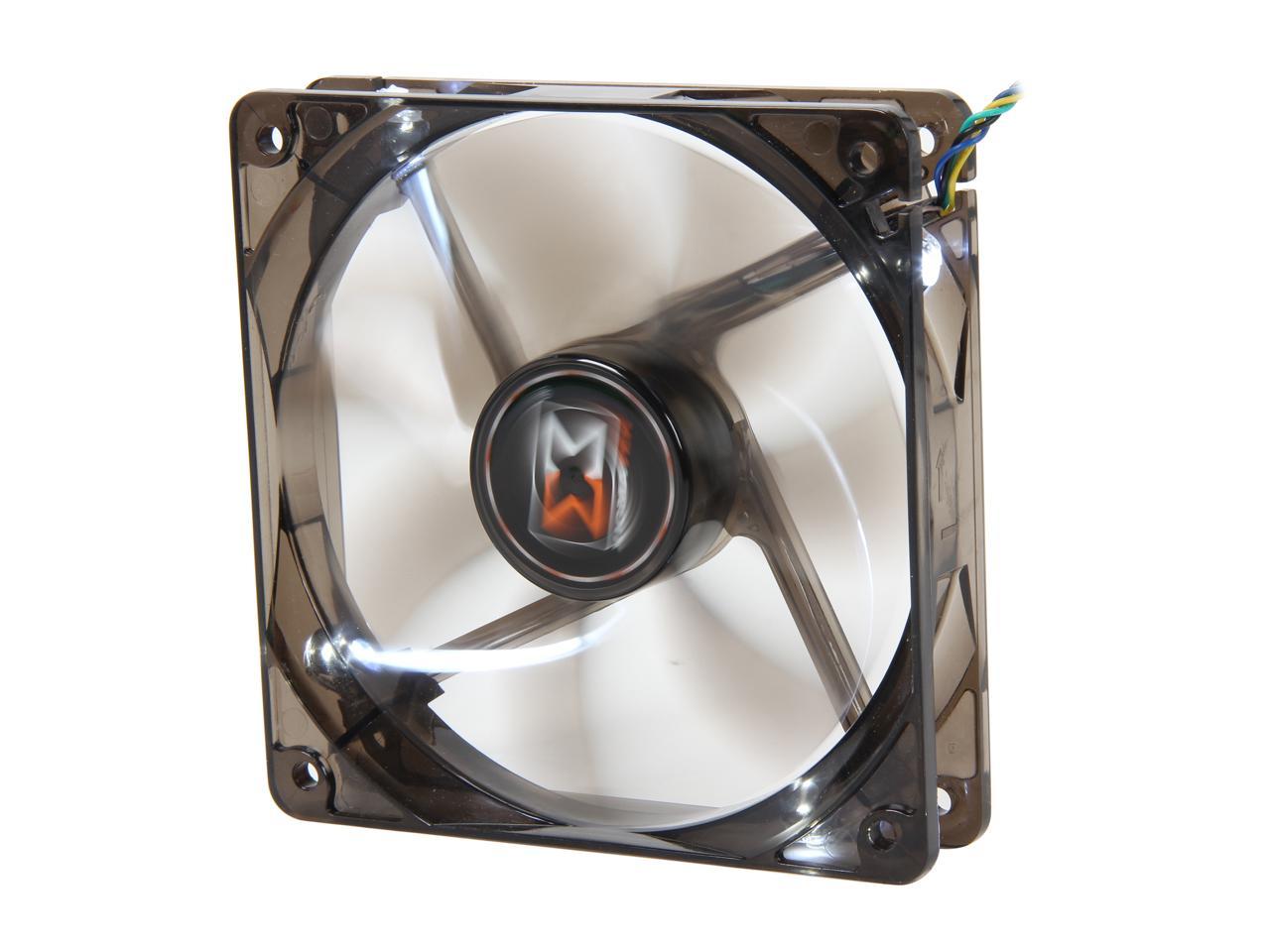 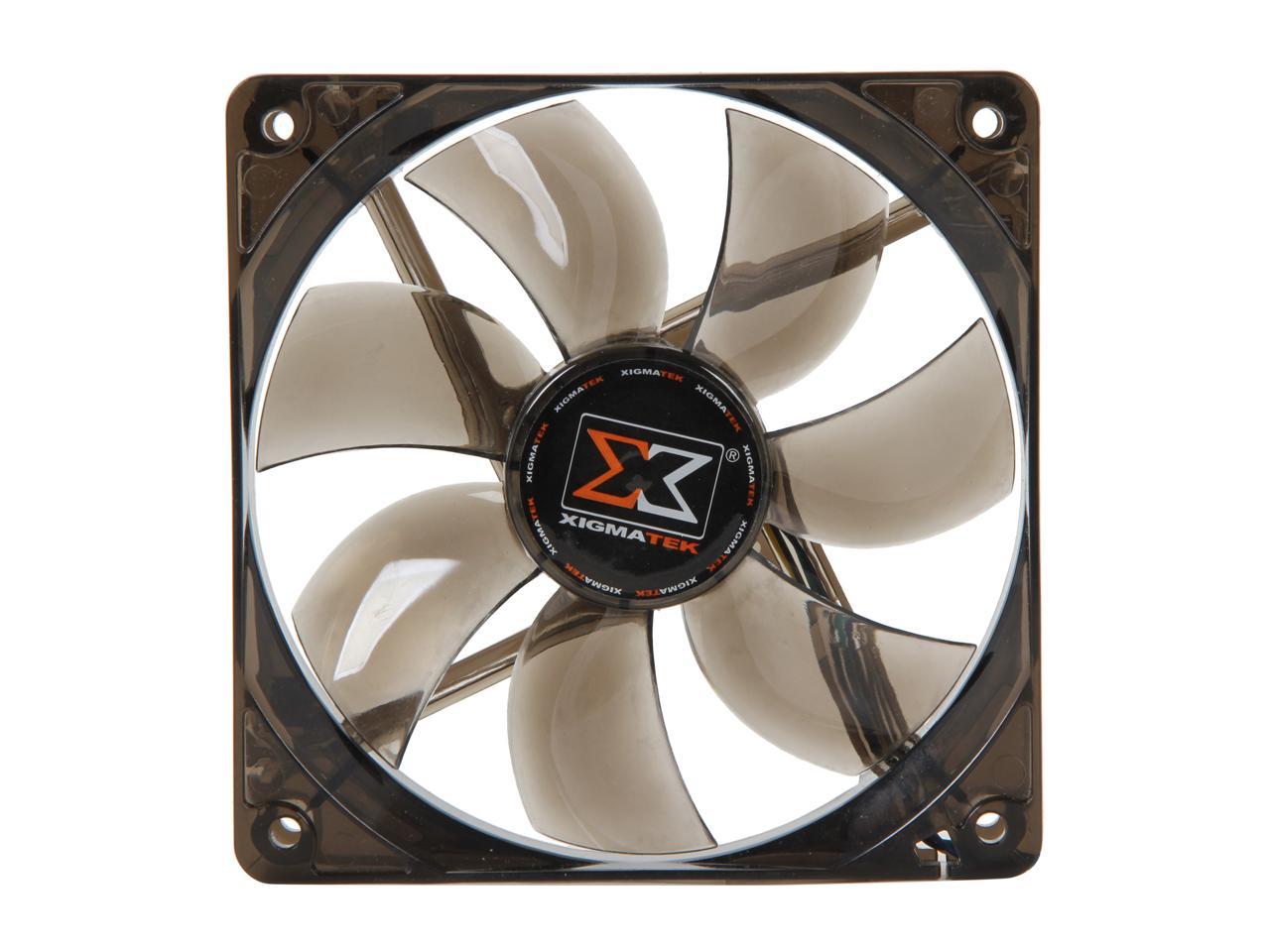 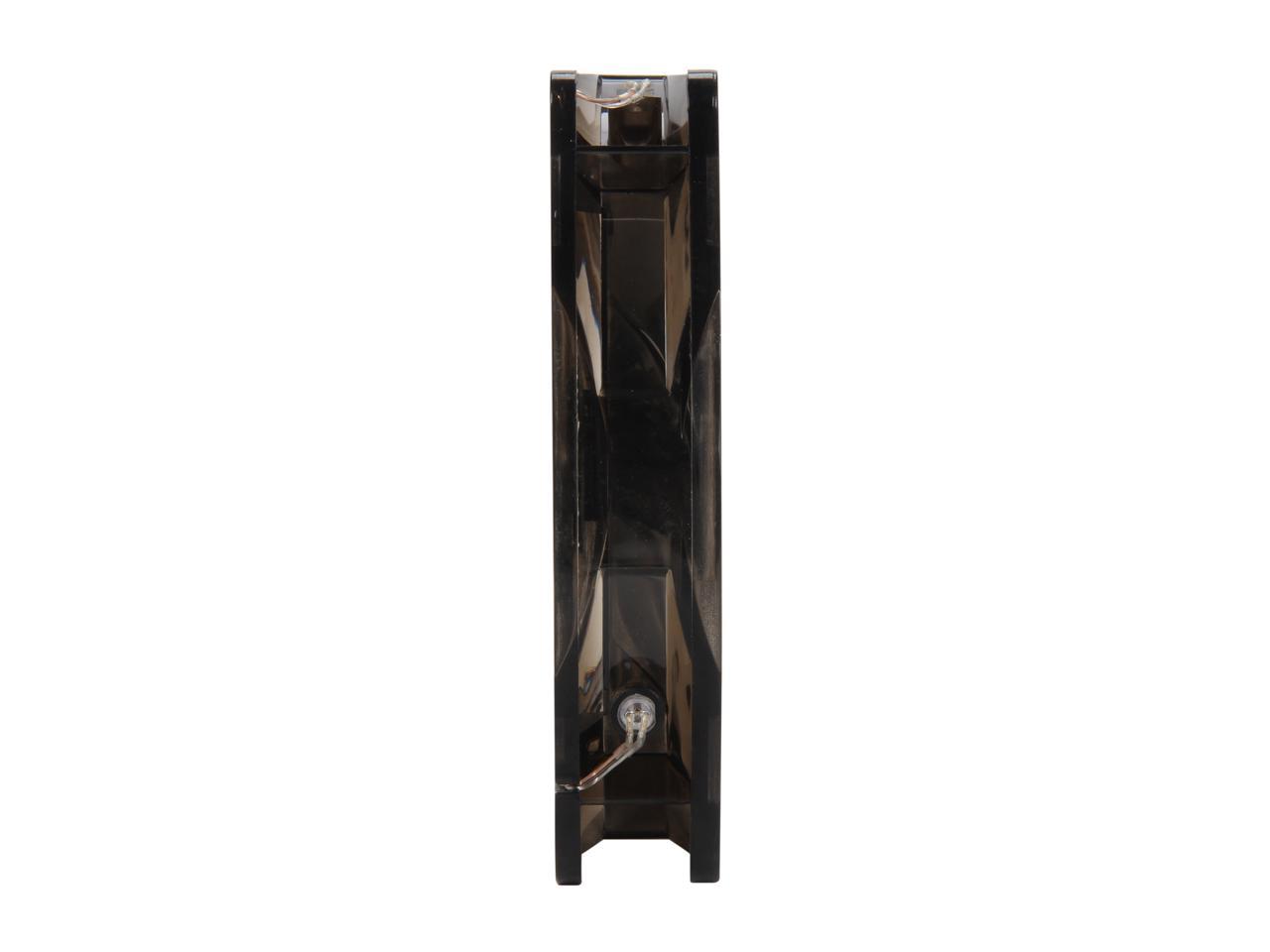 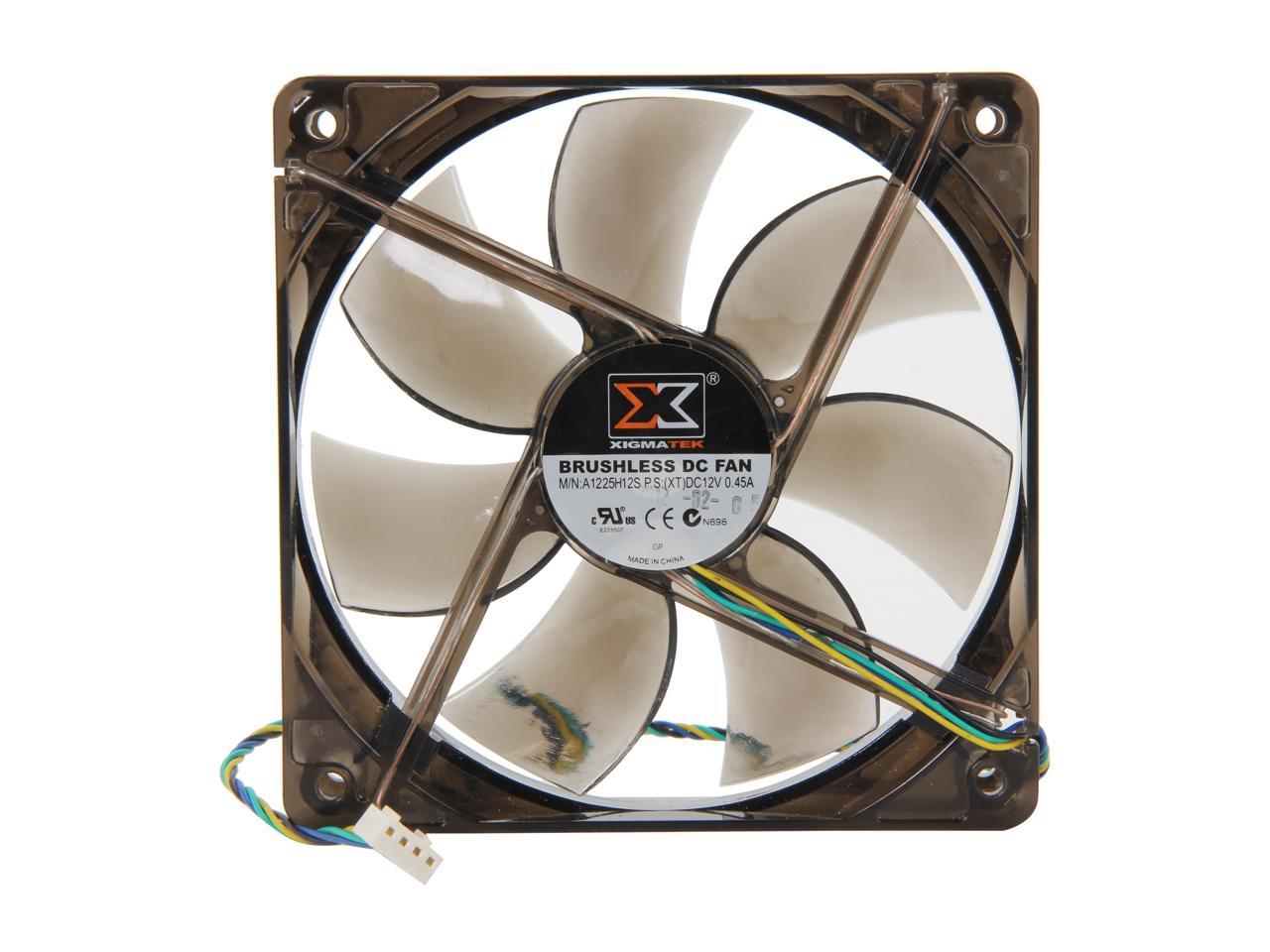 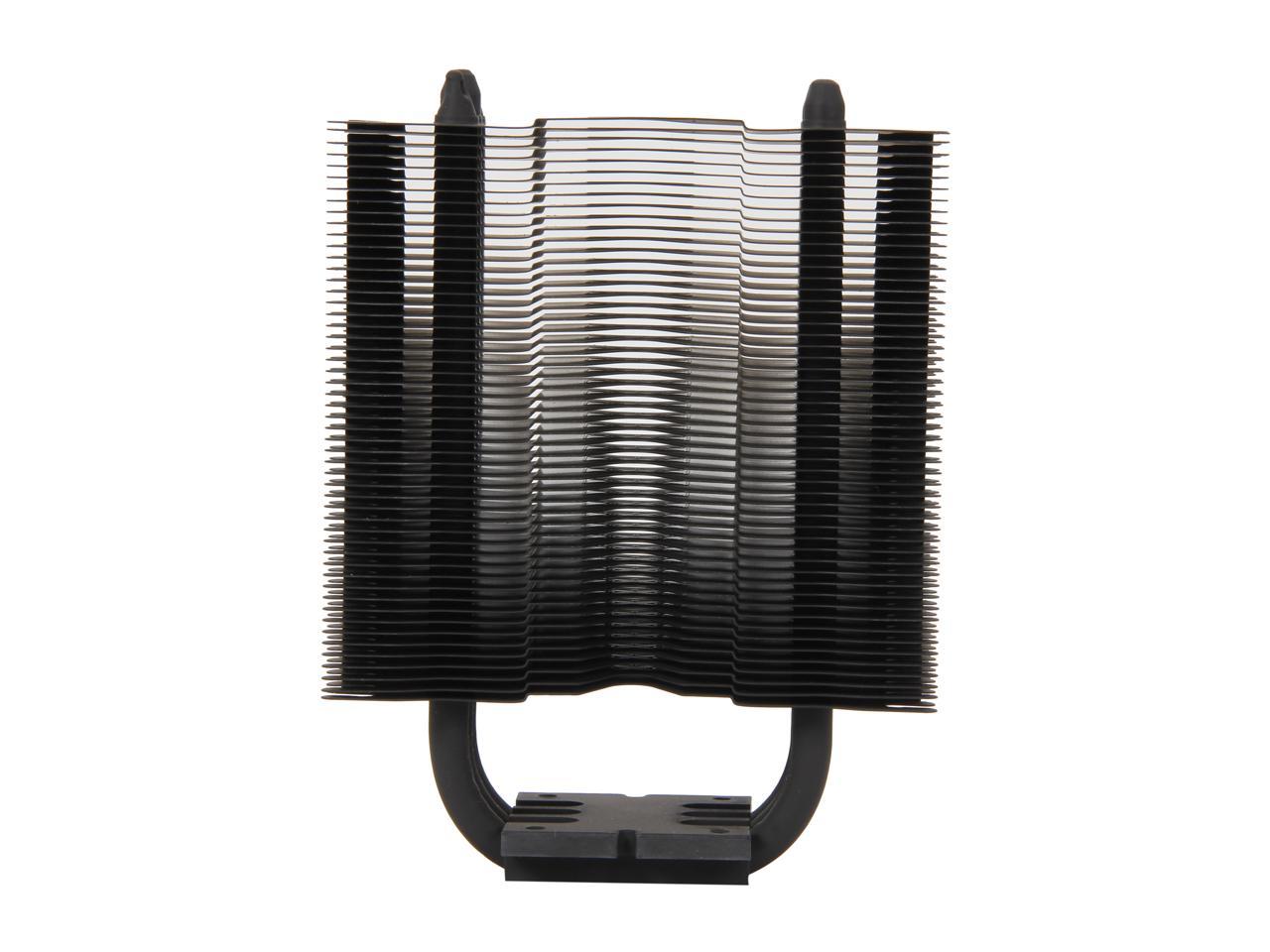 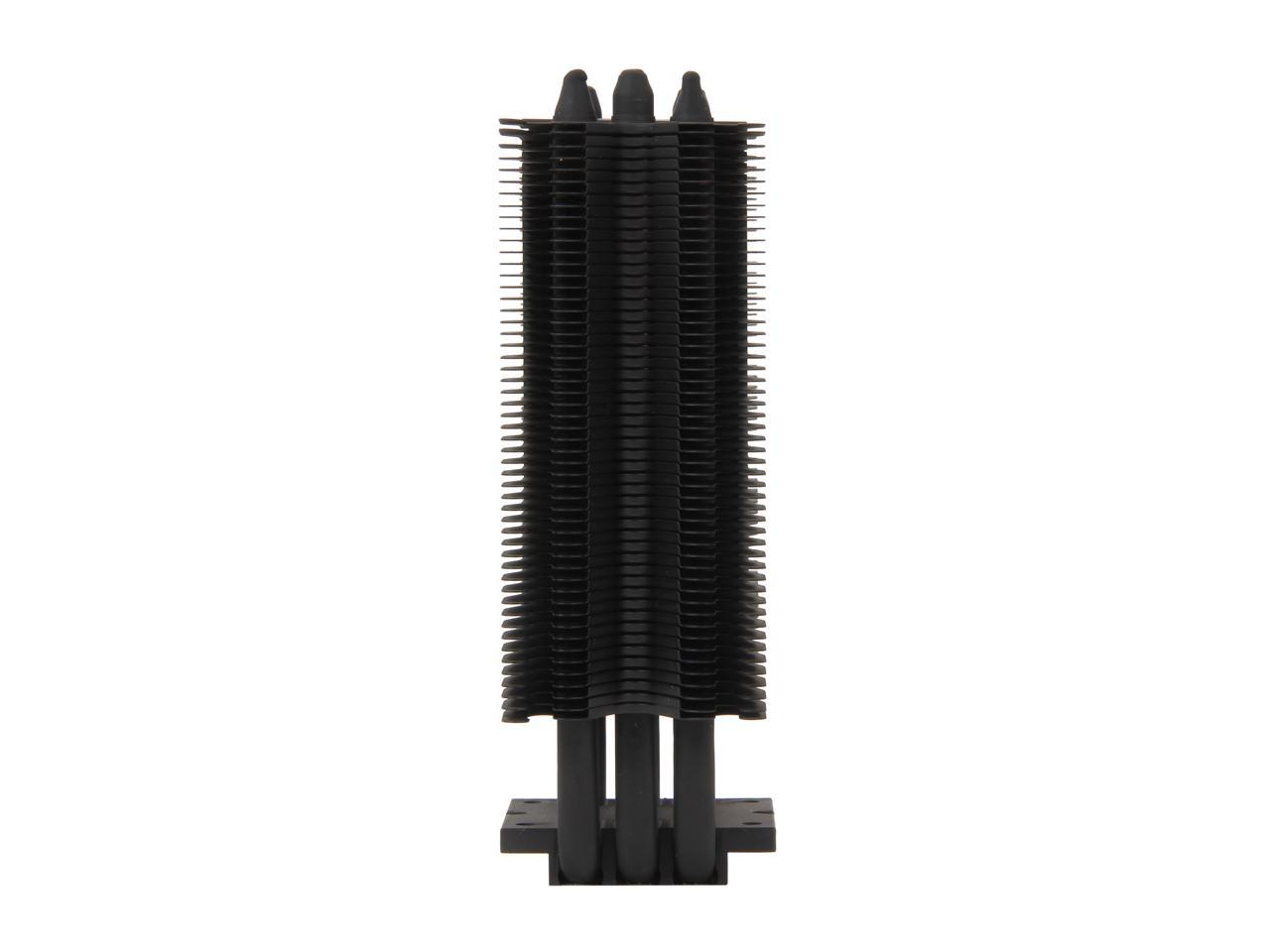 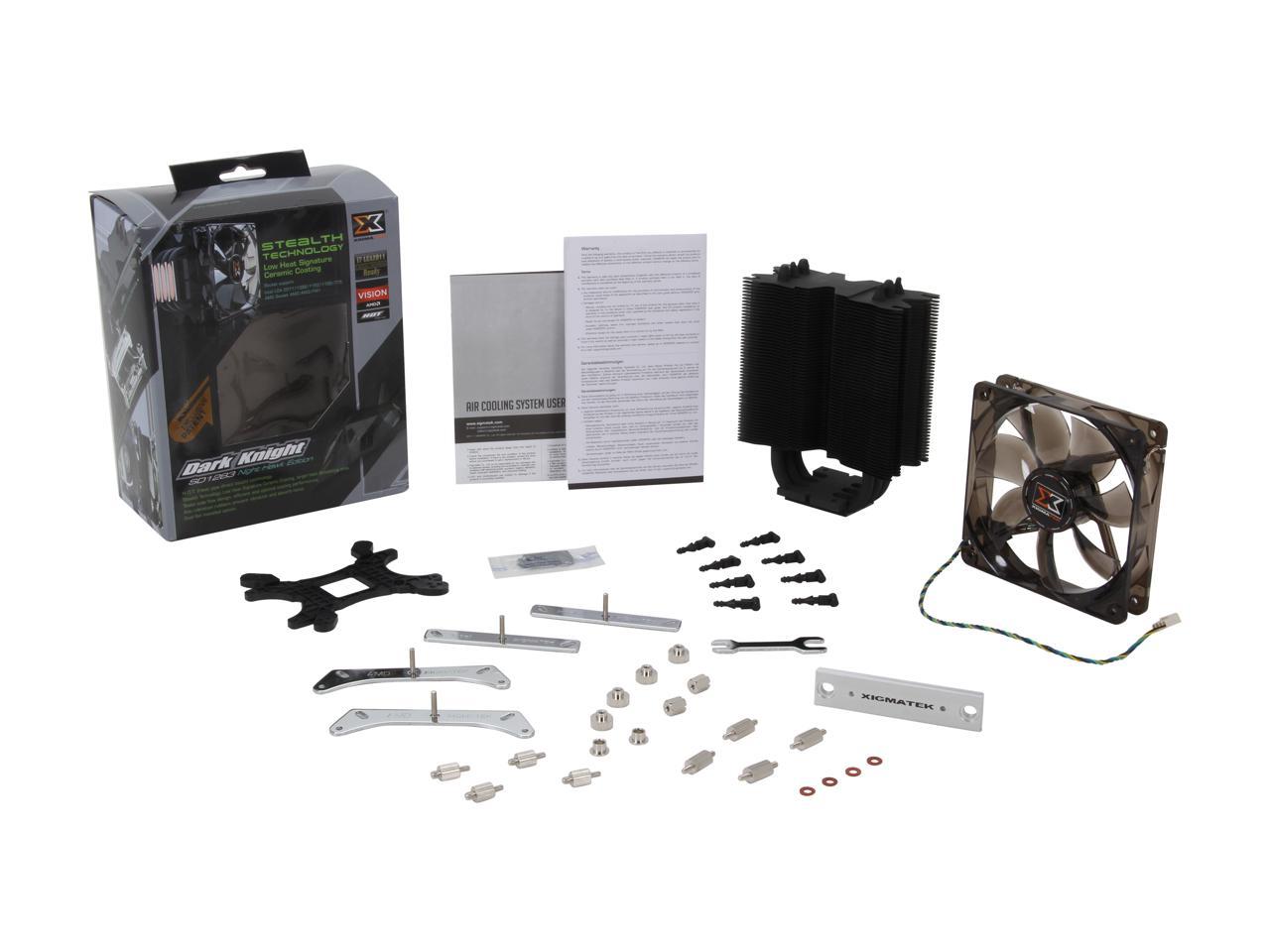 (697) Write a Review
OUT OF STOCK.
Fees for brokerage and duty included in price.
Overview
Specs
Reviews

The Xigmatek Stealth series coolers make use of advanced ceramic materials originally pioneered in the high-tech aerospace and automotive industries. The ceramic coating features high strength and light weight and is specially formulated for maximum thermal conductivity making it well suited for use in extreme temperature environments. The Xigmatek Dark Knight SD1283 is the world's first enthusiast cooler to utilize a modern ceramic coating and was the result of Xigmatek thermal engineers thinking outside the box.  Xigmatek's innovative use of this space age material is not just for good looks - the ceramic coating along with Xigmatek's patented HDT technology greatly increases the efficiency of thermal transfer away from your CPU. Features
Performance As Good As It Looks
The Dark Knight SD1283 features a high-tech and stealthy matte black ceramic finish and is mated with a matching smoke black fan, giving it a unique presence. The effectiveness of the ceramic coating allows for reduced width fins resulting in an ultra-slim profile  making the Dark Knight SD1283 well suited for either single or dual fan (push - pull) configurations that easily fits within the physical constraints of modern motherboard designs.
Performance testing between the similar Dark Knight SD1283 (ceramic) and GAIA SD1283 (non-ceramic) coolers indicates a performance increase of of up to 10% under stock and overclocked CPU speeds. Pros: Great cooler, easy install on AM3 system. Runs quiet and LEDs are unobtrusive. I can OC my Phenom x4 840 from 3.2 to 3.6 without breaking a sweat and could probably do more, but I don't want to voltmod too much.

Cons: Blows upwards on AMD systems, though tbh this is not really a bad thing- heat rises after all and I have an exhaust fan on the roof of the case so it all works out. Big- Blocks the first RAM slot- luckily I was using smaller RAM so it's not a big deal, though I won't be able to remove it without removing the heatsink first.

Overall Review: Had to call Xigmatek to sort out rebate. Bro tip: They want a printout of your official INVOICE, not the printed packing slip that comes with your order from Newegg. I eventually got it, though its always nice to not have to argue for it.

Pros: Smooth finish, looks very nice. Installation for AMD CPU was very easy, albeit i felt like i was gonna break my mobo with how much pressure i had to apply to the clip, but thats how all these aftermarket coolers are.

Cons: Larger than the specs that newegg says, its actually around 159mm high for the heatsink.

Overall Review: Im running an AMD Phenom X3 8750 2.4ghz BE Overclocked to 3ghz 1.4vcore, was running at 30C idle and 63C load with stock cooler, with this cooler it dropped to 14C idle and 31C load, that is utterly amazing. Thumbs up from me!

Cons: The instructions are horrible, youtube is your best bet, I used this one --> /watch?v=u5UYc2qGyJU (type youtube before the slash). Even though he uses a mini ITX motherboard the concept is the same. The fan installation was horrendous. However: NOW BEFORE YOU INSTALL IT READ THIS!!!! Install the rubber clips onto the heat sink BEFORE you attach it to the fan. It will make your life SOOOO much easier and you have less of a chance of bending the pins.

Overall Review: Has performance that rivals an h100 yet is less than half of an h100's price. (Teksyndicate made a video for this, I tested my i5-3570k and got practically the same results, give or take 1-2 degrees). I overclocked my i5-3570k with the stock heat paste that came with the dark knight II and got 60 degrees while running prime95. It went up to around 65 degrees after a few hours of prime95. There is pretty much NO reason to skimp out and get an evo 212, on sale this cpu cooler is around $30, and flat out beats most water coolers. Don't believe me? Google teksyndicate's review for this cpu cooler, I bought this after watching his video and I'm very glad I did.

Cons: Installing this thing will make you want to punch a baby. Don't even bother with instructions. They are the worse i have ever seen and i could not make heads or tells of it.

Overall Review: Remember when you install this stay away from babies lol.

Overall Review: Was leary about going with a Air cooler on my build this round, but after reading benchmarks and temp comparisons I decided to give it a try. I was not disappointed! I was so shocked at the temps I decided to take my H100, H80i, Noctua NH-D14 and Hyper 212 EVO off my other builds to test them against it. after 2 hours of Prime95 as well as AIDA64 stress The dark knight beat my other air coolers, even the coveted D14 by 3 degrees. Lost to H80i by 1 degree and fell short of my H100 by 4. I will never buy another closed loop water cooler again. Only 3 degrees warmer then the H100 which is easy 120$, this was only 50$. It also looks great and the white LED fan gives it a cool look. i was after Performance and i got BOTH! Dont look elsewhere, you have one of the best coolers on the market right in front of you. Dont take my word for it test it out yourself. On the flip side to this amazing cooler. At first you think you needed 3 years of rosetta stone to decipher the directions and once you start to figure it out you swear they crapped you out of all the parts. The one I received only has all the parts for "type #3" in the directions. You'll know what im talking about when you get it. Dont panic Type 3 is a good one and it goes together in 2-3 mins.

Pros: this cooler does a great job, my temperatures stay below 50c with a heavy OC of a CD2. The fan is fairly quiet. Replaced a larger heatsink with two 12cm fans and this one actually works better and crowds my case less.

Cons: The width is easy to accommodate, but the height off the motherboard is more than I expected. I had it pointing back and I had trouble with my side fan hitting it with an ANTC 900 case. I then aimed it up out the top fan and could get my case back together. It cooled equally well in either configuration.

Overall Review: The "direct touch" heatpipe design seems a little weird when applying thermal compound because it squeezes up into small gaps around the pipes and it seems you have to use litte more. Maybe I did it wrong, but it works amazingly well. The next size smaller might have worked equally well and I could have aimed it out the back of the case for better overall airflow in my case.

Cons: -Doesn't support fans on both sides (if that's your thing). -Doesn't have the cooling power of larger coolers. -Included fan isn't silent (but it's pretty close). -Included documentation didn't specify how to mount on 1156 (just follow the 1336 instructions).

Overall Review: Honestly, it's exactly what I needed. Unless you're an extreme overclocker looking to go above 4.5Ghz this is all you need. It looks great, it's quiet, and it keeps my 2600k cool whether I overclock it or not. And all of this for only $16.50. Absolutely incredible considering I paid $50 for a Zalman cooler years ago.

Pros: The Dark Knight II Knight Hawk combined with Arctic Silver 5 completely blows My Arctic Freezer 7 Rev 2 out of the water. I recently upgraded to a Phenom II X4 965 BE, with my former heatsink, I had to undervolt the CPU just maintain stable temps. With Prime95 I had the CPU running at 76C in about 1 minute before I called it quits at stock voltages. The Dark Knight cools my CPU to a chilling 25C at idle and holds it steady at ~45C with Prime95.

Cons: As most everyone else has pointed out, the instructions are garbage and the pictures aren't much better. I noticed most of my parts were somewhat labeled making it easier to determine what ones should be used, but it took a good 15-20 minutes to get a good idea of what was going where. I would suggest prior to applying thermal paste, set the heatsink in place first to get an idea of how it should be mounted, this will minimize the number attempts and make the process much smoother. For socket AM3 I used the AMD Type 3 Diagram as a point of reference. The fins of the heat sink feel a bit flimsy, but overall it feels pretty solid. The rubber fan mounts took a little work to fit onto my Corsair SP120 High Performance Fans. I recommend fitting onto the fans first as it seems a little easier to get them on the heat after.

Overall Review: I never had a problem with UPS's shipping until this purchase. At no time during my purchase was I informed a signature would be required for delivery. As a result my shipment was delayed an extra 2 days because I had to figure out which of my neighbors would be available to sign for the package due to my work schedule.