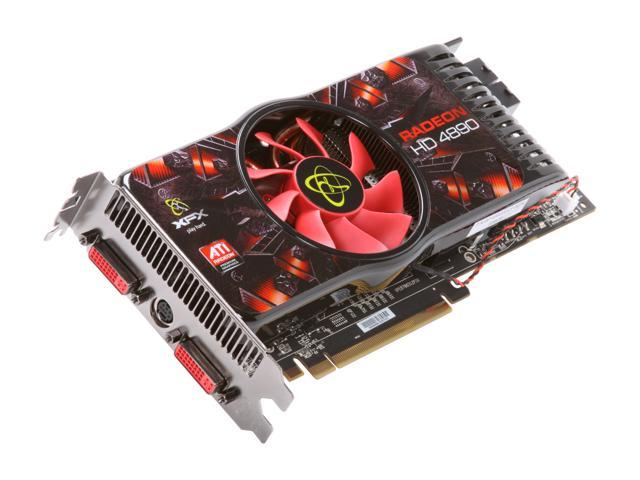 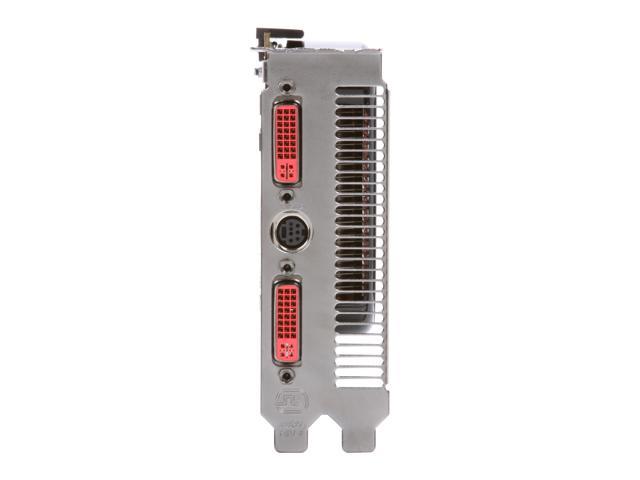 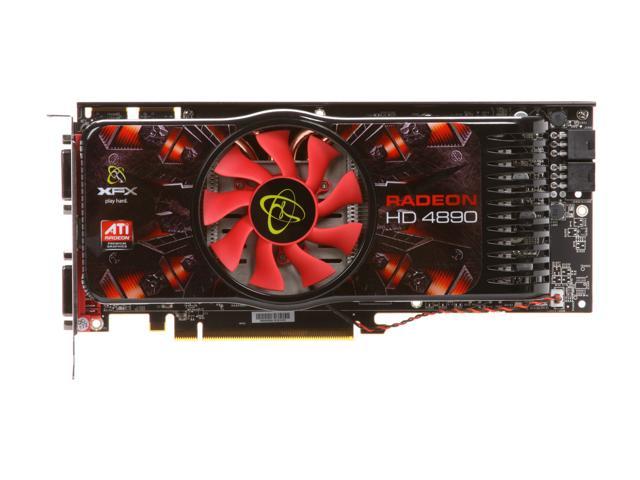 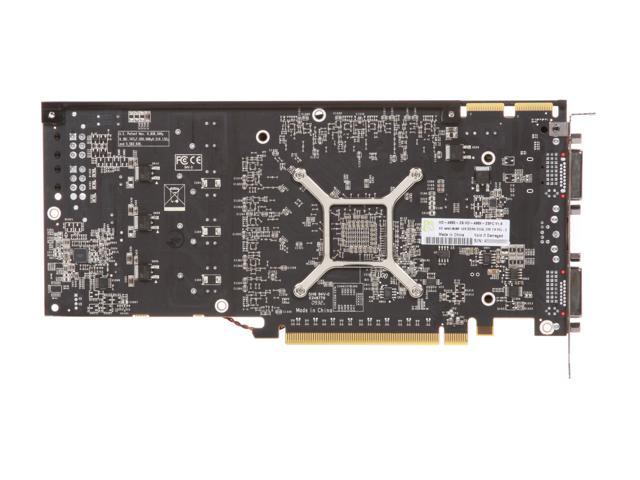 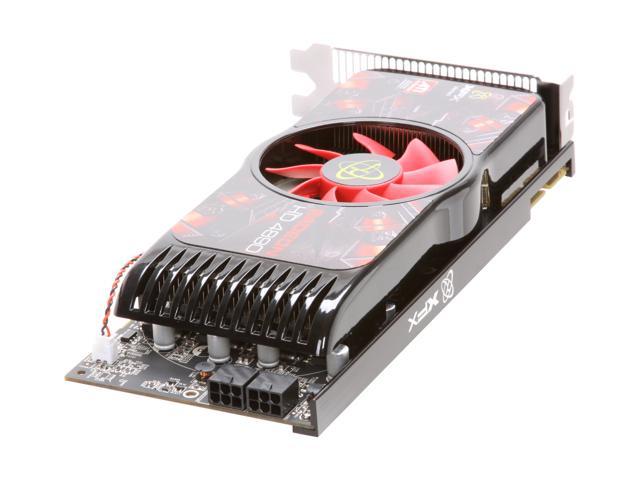 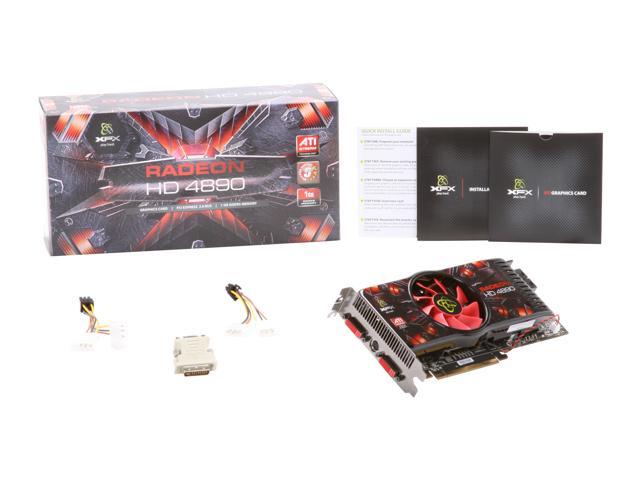 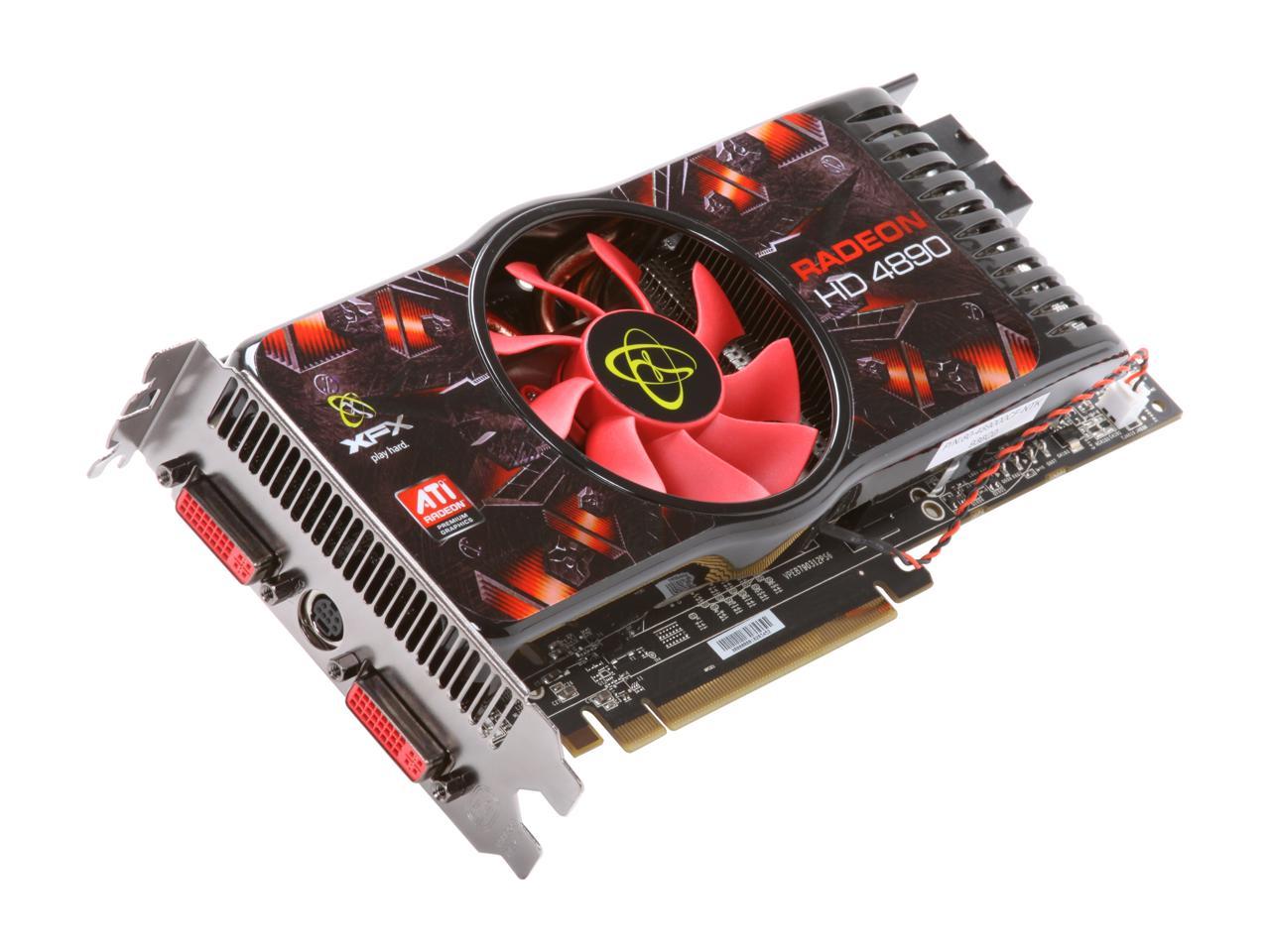 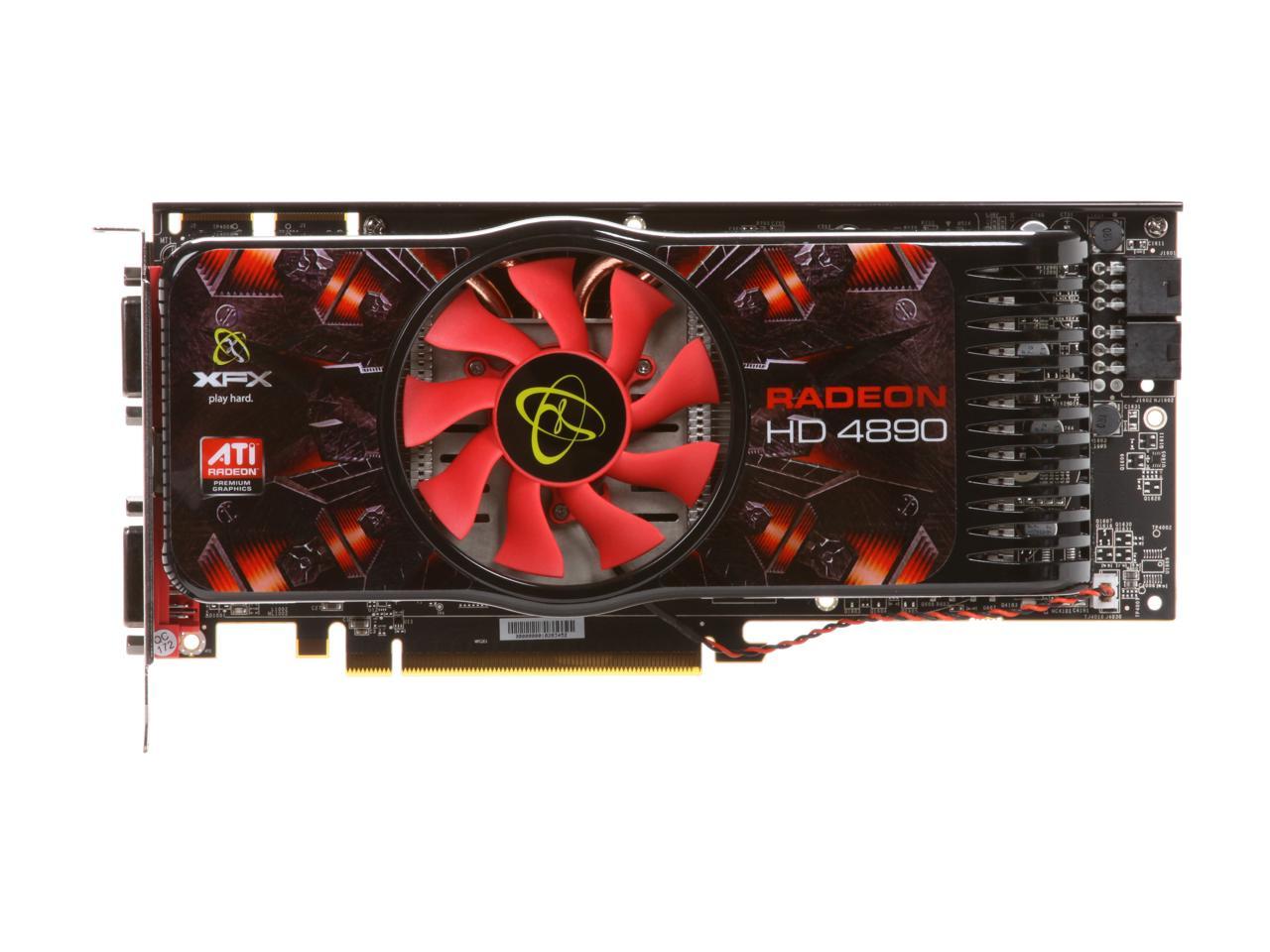 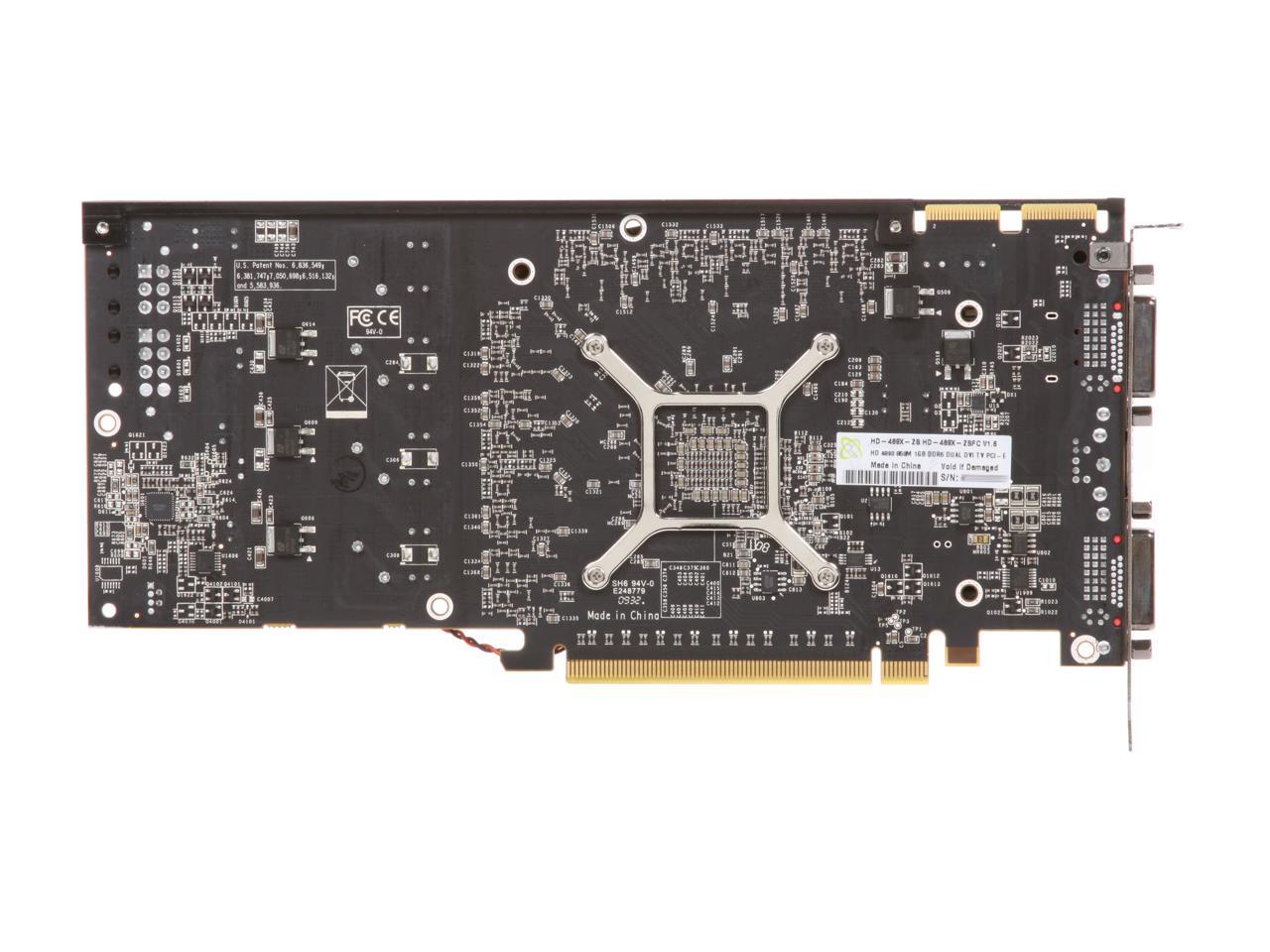 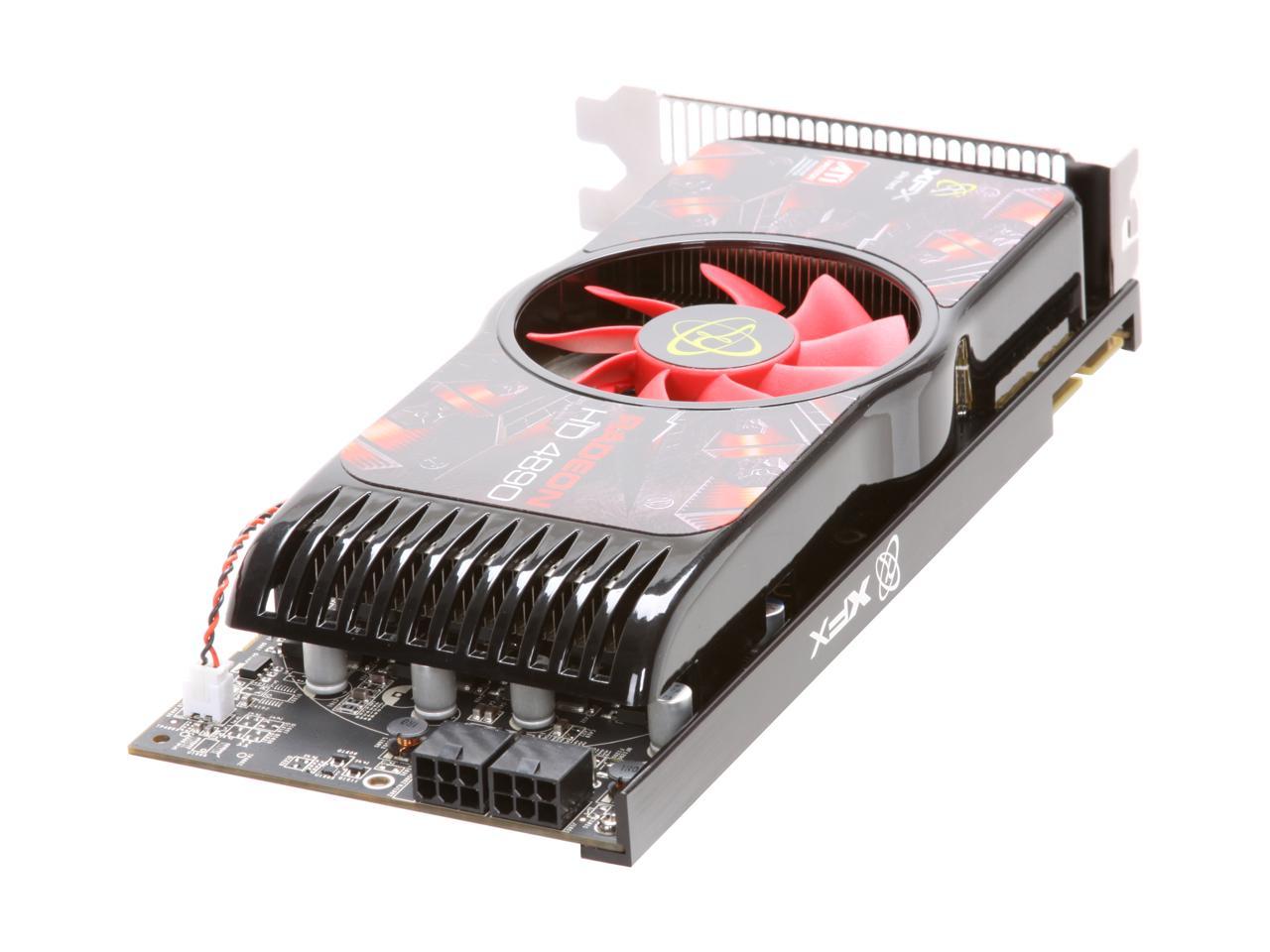 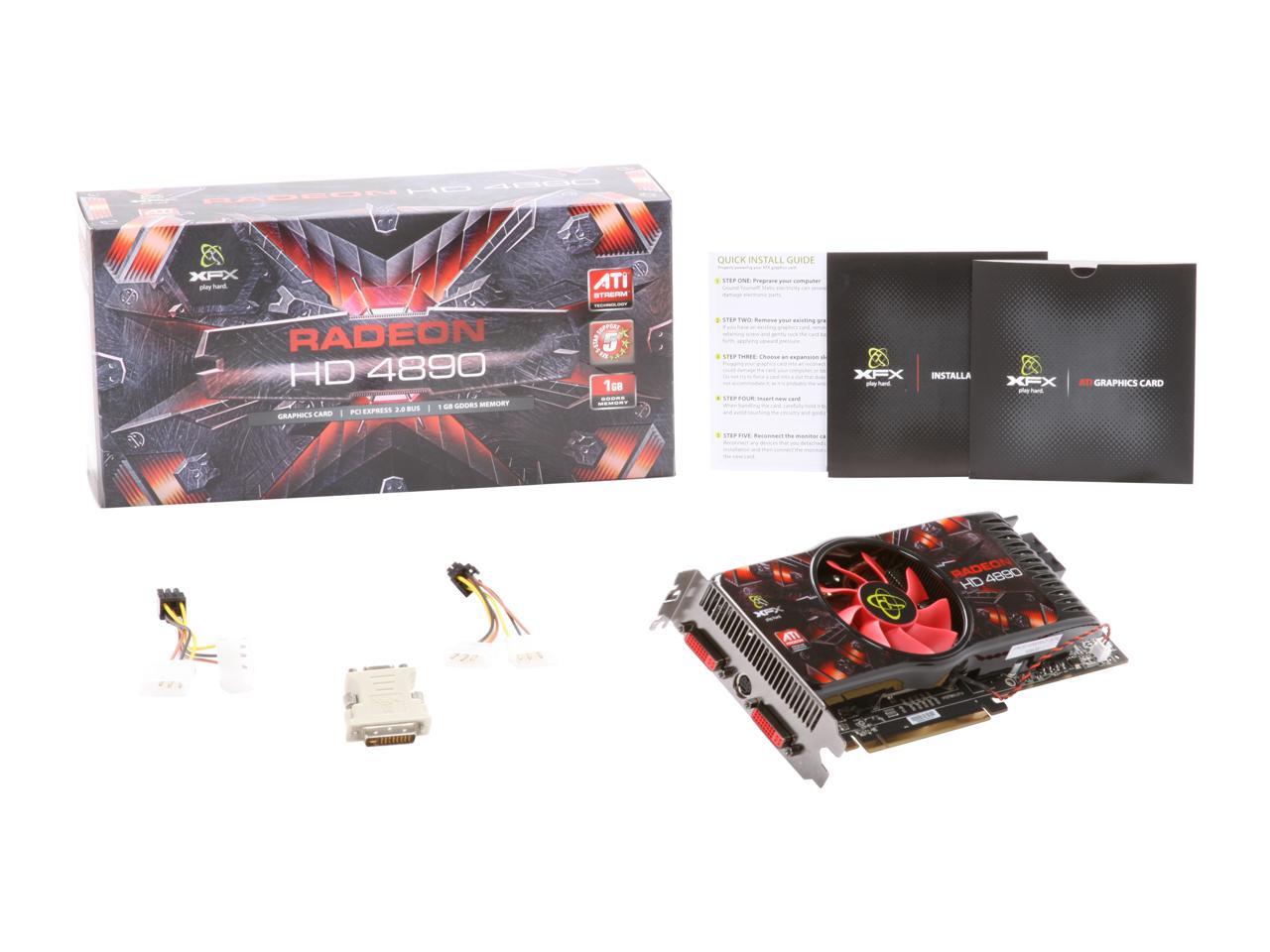 (159) Write a Review
OUT OF STOCK.
Fees for brokerage and duty included in price.
Specs
Reviews

Learn more about the XFX HD-489X-ZSFC

Pros: Runs quiet with default fan settings, Good quality video, other than the heat I enjoy this card.

Cons: This card has three air exits, 1 in the rear of the case, one towards the front of the case and another towards the mb, The one towards the mb is rather large so probably 45% of the air going through the card exits towards the mb on the bottom of the card. On my system with 2 120mm fans, one fron one rear my case heats up pretty bad, make sure you have a good case airflow as 2/3 of the hair heated by this card goes into your case not out the back.

Overall Review: You might consider watercooling for this card to get the heat outside of your case.

Cons: At idle, the fan hunts up and down. But I was able to fix this within ATI software settings. I manually set the speed to 50% which is quite silent. Note the fan will still increase speed when it needs to keep the temperature down. Check the Help file on manually changing the Fan Speed and you will see. I have also verified the fan still increases speed when playing high end games.

Overall Review: Not much of an overclocker.

Pros: This thing has been great! Was worried about some of the other reviews but this card performs allmost as well as my 2 4870's in crossfire all by itself. The temperatures are way better than my 4870's bringing down all my temps after replacing my 9800 gx2 which it performs way better than.!

Overall Review: 2 years ago I bout a 9800 gx 2 for over 400 dollars and had microstutter issues all along. For a little over 200 dollars this thing stomps it. No more nvidia for me after 2 cards biting the dust. Cat see any reason to overclock. Maybe thats why some of these are dieing because people try to push the clocks.

Pros: Did my homeworks before buying, went through all reviews (thanks Newegg!) and benchmark reports. Installed and worked as expected. Updated drivers. Et voila ... runs all my games at 1650x1050 at max settings. I think this card is providing the best bang for the bucks at this moment, mainly when considering the price of the new generation units.

Cons: Fan speed hunting is noticeable only at PC startup. After a while, temp is stabilizing at 43C and fan speed is steady. Was not able to overclock on my Gigabyte P55UD3L/i5 combination, but who needs it with such a fast card. Too bad ATI is not producing this very good unit anymore, which has driven the price up.

Pros: Smoking fast. Super cheap. The HD 4890 is a modest improvement over the ever popular 4870 in terms of speed and reliability. This is my second one and I would buy a third if I could. It did not have much of a run before being overshadowed by the DX 11 HD 5000 series and it can't span one game screen across multiple monitors, but performance wise, I think it holds it's own against anything in the 5000 series (for now).

Cons: Unless something has changed, you are rolling the dice with this XFX card. It has nothing to do with the ATI chipset. I bought this card to run in crossfire with a 4890 I already had. When it arrived and I installed it, it was very unstable and there were two verticle white lines running from the top to the bottom of the screen. After Windows boot, I would immediately get BSOD no matter how I configured it. I RMA'd through Newegg (another flawless transaction, thanks Newegg) and the replacement works perfectly. Overall, I would say it was worth it but read through the other reviews and you will see there are a lot of duds out there.

Overall Review: My first 4890 was a Sapphire Vapor-X 2GB DDR5. That is what I hoped to Crossfire, but they quit selling them. You can't even get one anymore. I had to settle for this XFX which is only 1GB DDR5. I was a little worried about it but it Crossfired perfectly. I even overclocked it to match the faster clocks of my Sapphire with no trouble (I read somewhere it would help performance to match the clocks). I had to buy an extended Crossfire bridge because two of these next to eachother is just too HOT. I skipped a slot and used the longer bridge and it worked great. They still run slightly hotter than they would on their own but that is to be expected. The card on top is the hottest because I think the other card below the fan disrupts the air flow and also heats the air some as it goes by. I don't know why the longer crossfire bridge is not readily available. I had to get an ASUS one from an online auction site. Good luck getting 3 of these to run together unless you're on H2O

Cons: Fan little bit noisy when under load but for the power you have, I was expecting it. I will probably swap the GPU cooler for a Accelero S1.

Pros: Great bang for the buck Fast card Runs all my games on high settings I can't hear it

Cons: Wish I had two

Pros: Standard 4890 and it works as it should. I have 1 and my friend has 1 and neither of us have had any issues with the cards. Plays everything maxed out on my 1920X1200 26" monitor except for Crysis which is to be expected.