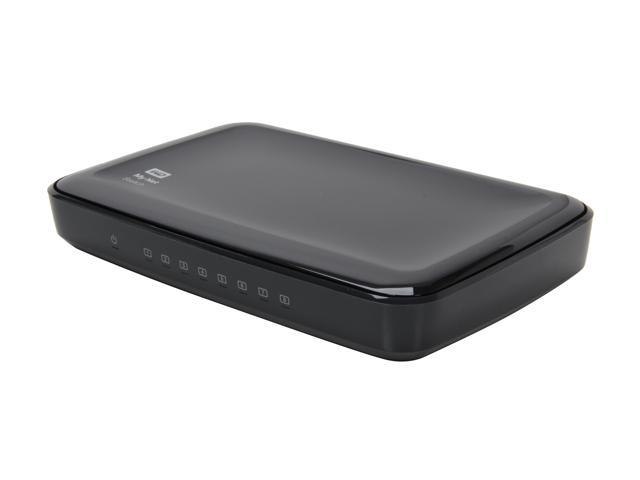 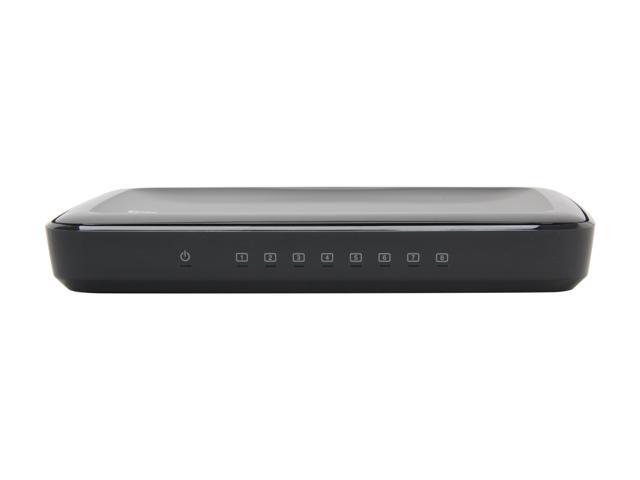 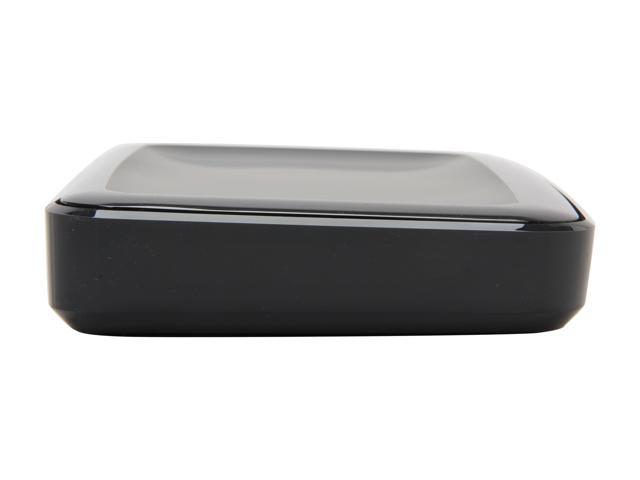 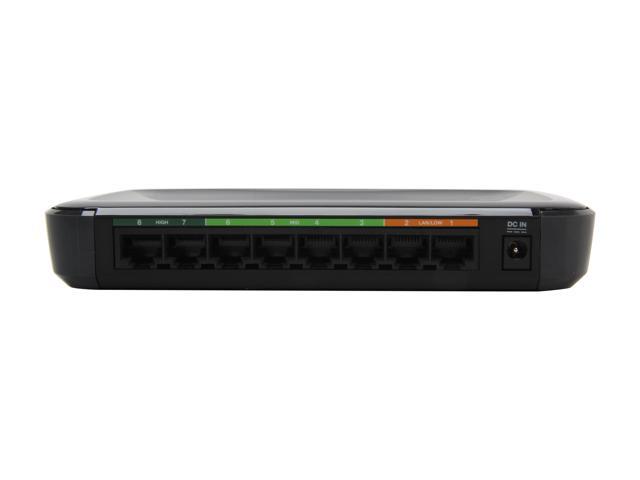 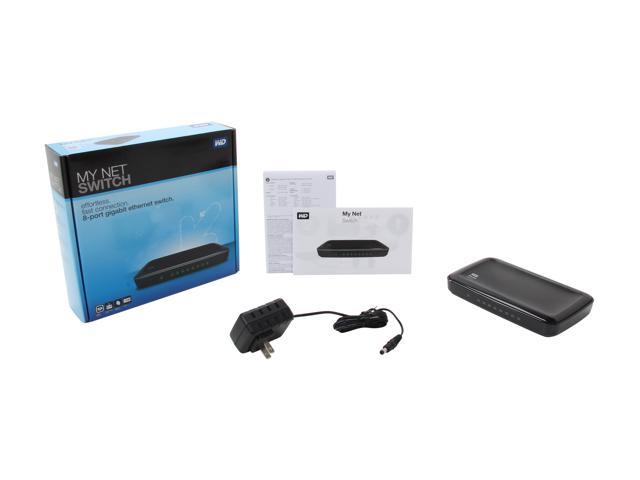 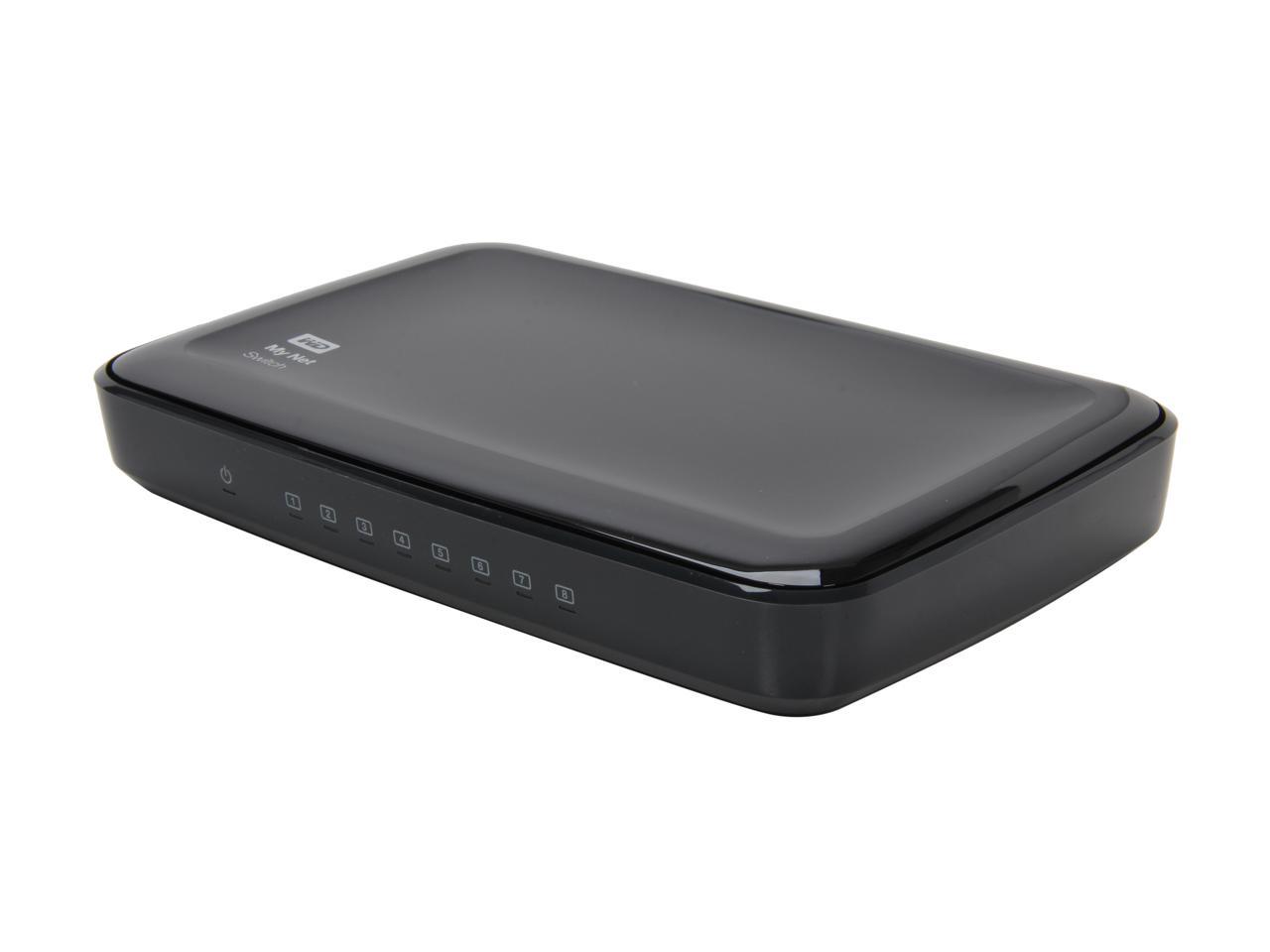 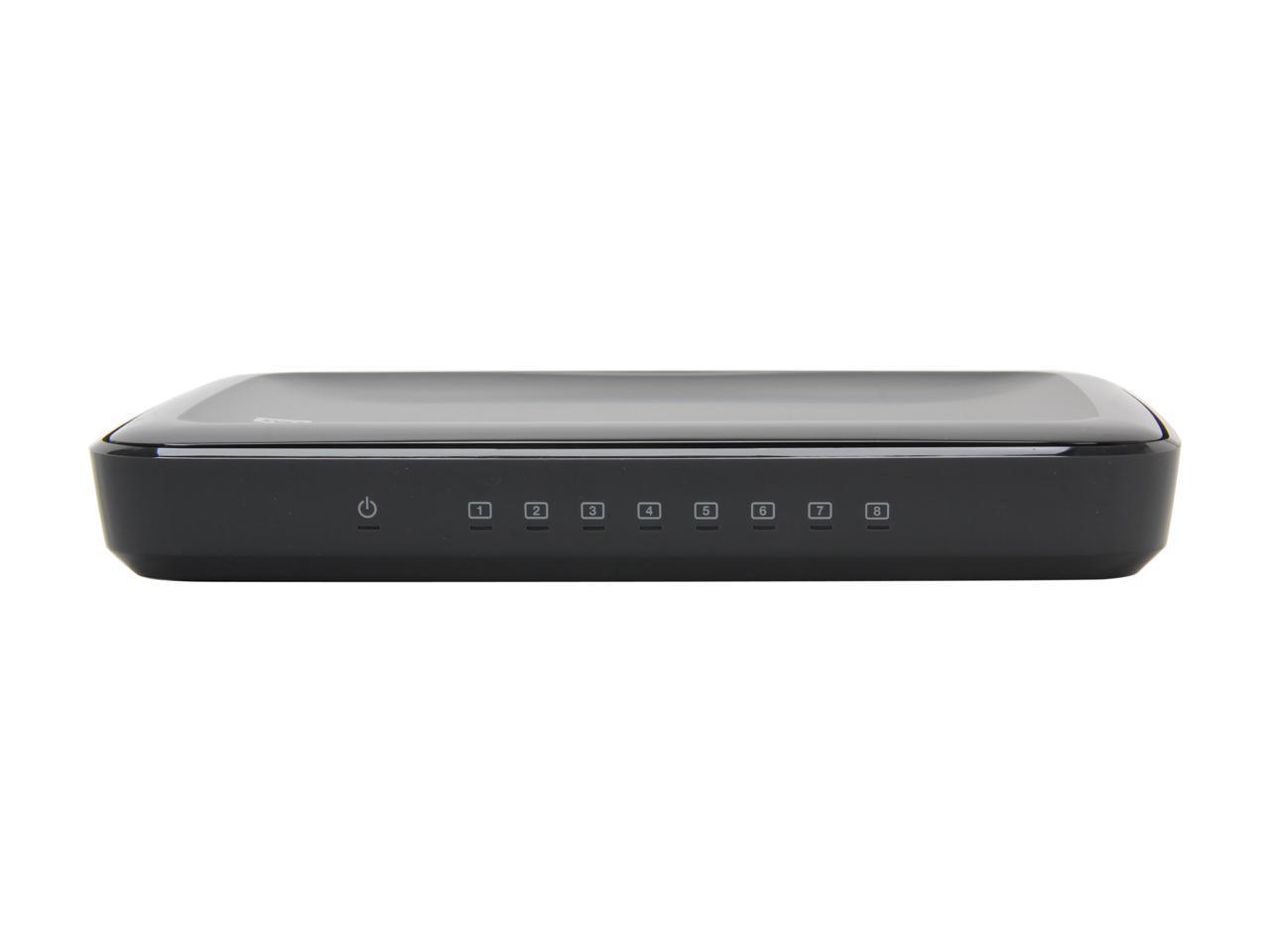 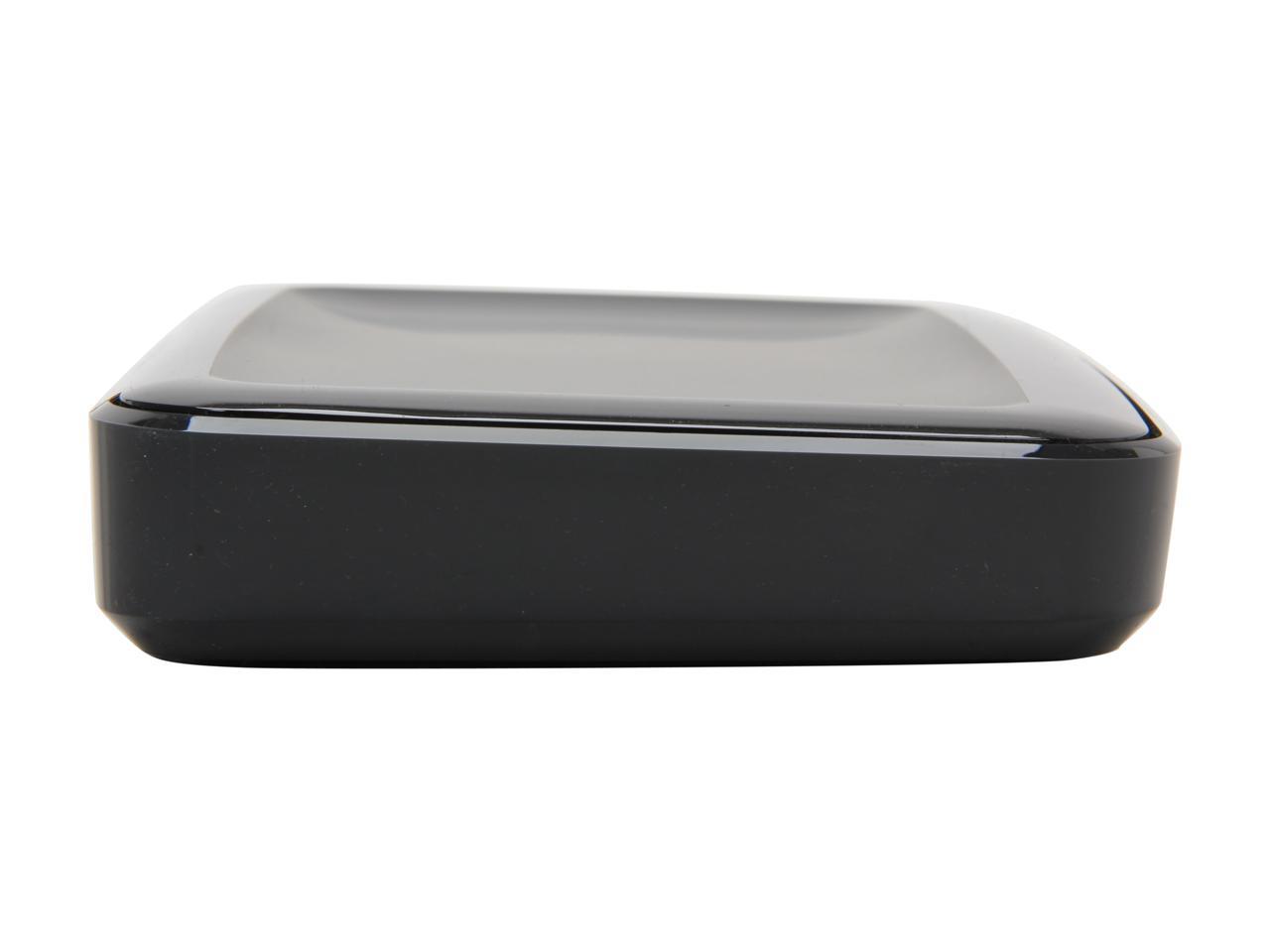 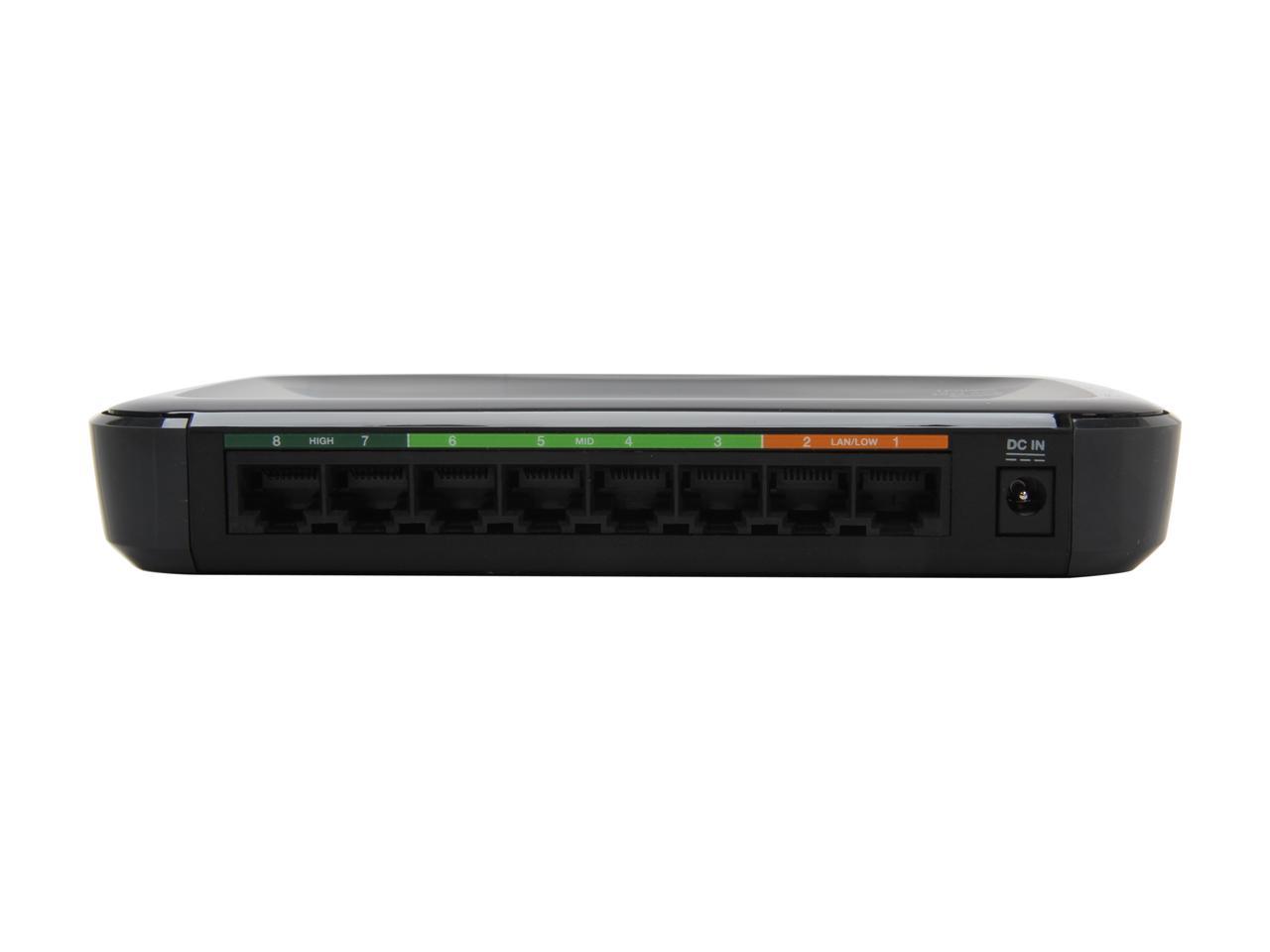 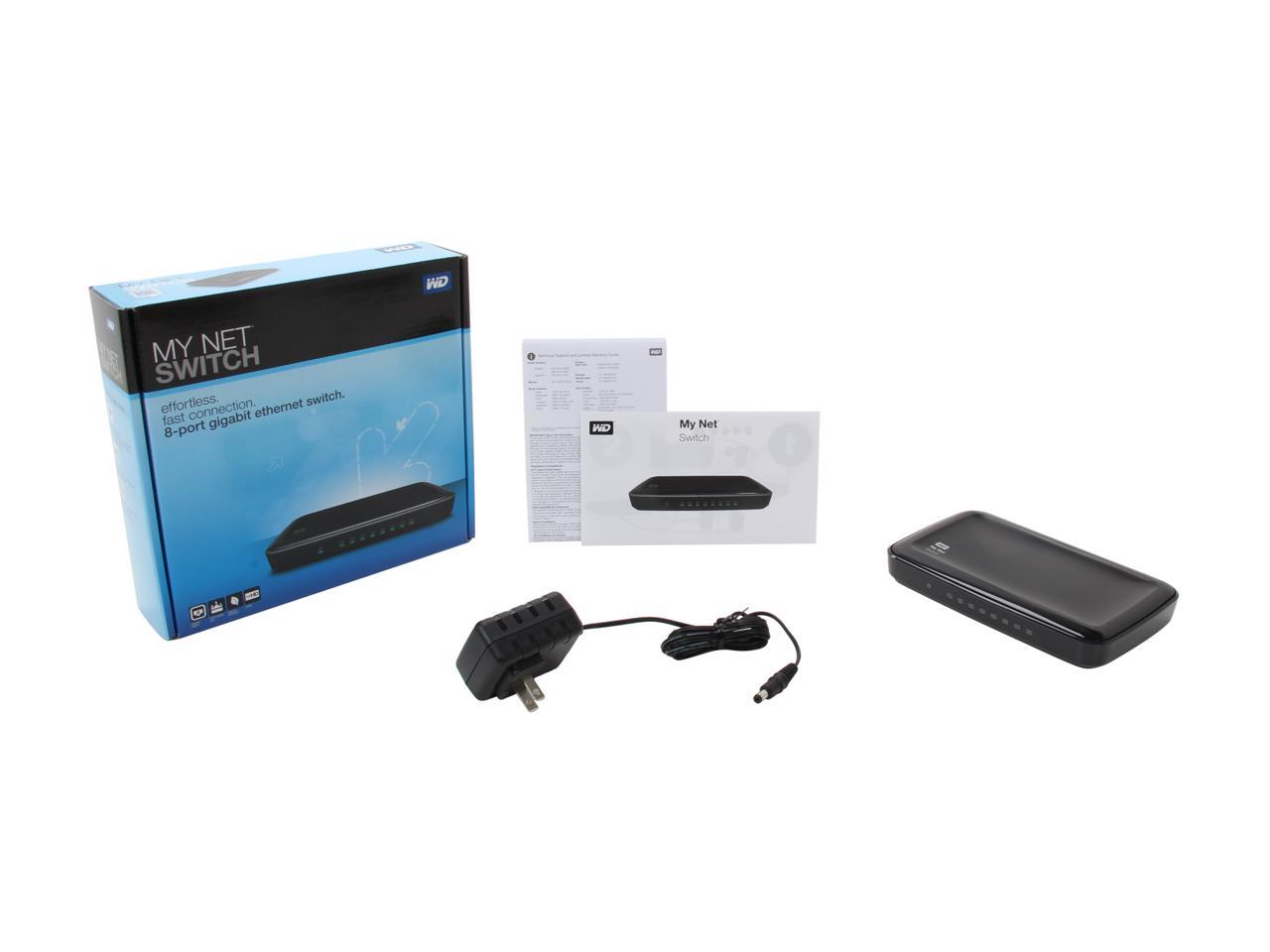 (6) Write a Review
In stock.
Ships from United States.
Fees for brokerage and duty included in price. Most customers receive within 5-17 days.
Overview
Specs
Reviews

Pros: This small form factor Gigabit (1000BASE-T) network switch is advertised as having the capability to perform basic quality of service (QoS) functionality right out of the box. This is true with 2 ports labeled "LAN/LOW" and 4 ports labeled "MID" and 2 ports labeled "HIGH." The intent, I believe is to plug devices into the network that are more network intensive (i.e. streaming video to a HTPC or a TV should be plugged into the "HIGH" ports while another computer or laptop can be plugged into the "LAN/LOW" port). This concept of giving the user some very limited control over QoS-type functions is limited - see cons. The physical switch itself is small with good looking flat black and semi-gloss plastics. LEDs are not overly bright and indicate network connections, network activity per link, and a power LED. The switch can be wall mountable as well and actually fits quite well with its small and slim design in tight networking cabinets or rooms where space is premium. It also looks good sitting on your desk being that's where most home users would place it.

Cons: Though there is not much needed in order to successfully connect a network switch to a home network, there is very scant documentation provided. Literally, only a few page pocket-sized foldout that resembles a quick start-up guide. The documentation mentions nothing concerns what types of devices to connect to what ports on the switch to enable QoS functions appropriately. One has to guess, on whether to connect a laptop to the "LAN/LOW" port or whether to the "HIGH" port because that laptop is sometimes used to stream online video. This leads to another major issue, which in order to change the QoS speeds going to specific ports on the switch to specific network equipment requires the user to unplug the cable and connect it to a different port. This is unacceptable being that network equipment is commonly repurposed to perform other functions that may or may not be network intensive (i.e. Can the "MID" port handle streamlining online content across the network? Can the "HIGH" ports handle 1080p video being streamed, or can the "MID" ports handle it. Nothing provided by Western Digital indicates what a specific QoS-related port can or cannot handle.) Additionally, not even one single Ethernet cable is included in the box. This is absurd being that Ethernet cables are incredibly cheap. This does not make this device completely ready right out of the box.

Overall Review: Western Digital is attempting to fill a niche by offering a network switch that will be used in a home theater and entertainment environment. If this is solely the role for a consumer purchasing this device then it might suffice. This device is not intended to be used in a normal home network in which one or more computers and a router and/or network printer and/or NAS is attached. Due to this very narrow focus and failing to address the specific niche, as well and very sparse documentation and lacking some basic accessories, this device only receives 3 eggs.

Manufacturer Response:
We appreciate your feedback and apologize for any inconvenience you may have experienced with your Western Digital My Net Switch, as this is not the typical nor intended experience with the product. We highly recommend becoming familiar with the My Net Switch's ports and features by visiting our Support site and downloading the User Manual. http://www.wdc.com/wdproducts/library/UM/ENG/4779-705070.pdf On Page 4, you will see the following information. The port priority assignment allows users to configure their device’s priority on the network with a physical configuration, by means of the switch’s 8 ports, which are segmented into the following: HIGH (Dark Green): VOIP, Online Gaming MID (Light Green): Video Streaming, Music, Data LAN/LOW (Orange): Web Surfing, Email, Router/LAN Connection Should a user decide that a server, computer, DLNA streaming media device or any other system requires priority on a LAN over other devices, a port on the back of the My Net Switch of higher priority is utilized for these demands. Prioritizing your device's on your LAN is completely up to the user, to decide which device's they prefer to have as a higher priority over other devices. Should you be interested in a device that automates the prioritization of QoS for you, you may be interested in our My Net N900 Router, which has Fasttrack Plus technology. You can read more here. http://www.wdc.com/en/products/products.aspx?id=710 Is there anything we can do for you at this time? You may contact us directly at (855) 842-5370, or via our support website at: http://support.wdc.com/contact/contact.asp?lang=en&ct=networking Please indicate within the online case creation or with the first support agent you speak with, that you are responding to a Newegg review, so we route you and your information to the correct team members.
Anonymous
Ownership: 1 day to 1 week

Pros: This thing is simple, light, and oddly tough. At first glance I thought the plastic casing felt loose and flimsy. So I dropped a 12” x 1/4” x 1/4” square steel rod onto it from about 6 or 7 feet high repeatedly to no ill effect outside of some scratches. So yeah, weird case with a couple spots that seem loose, but I guess it can take the punishment. Compared to my other networking equipment this thing also seems to run much cooler, which was also unexpected. To be fair, I haven't been able to tax this thing with my current network setup, but to also be fair my other switches and routers heat up much more, so yeah, take from that what you will. This thing is also ridiculously easy to use – it is a (mostly) dumb switch after all. I plugged it in in front of my router and then moved all my cables from the router to this switch. It just worked, no trouble. The port based QoS is a neat idea that could, in theory, simplify the hassle of network configuration, particularly if your home network consists mostly of boxes with dedicated functions.

Cons: If you need to be able to configure stuff down to the last detail, this probably isn't for you. Performance wise, I got respectable speeds (100 MB/s +) most of the time, but lots of small file transfers were a bit slower. Honestly, I don't really have much negative to say about it per se, I just find it odd.

Overall Review: This is a strange product (I think). My guess is that there are fairly few home users with enough devices centrally networked to need one of these (In my experience the average home either has a modem and a wireless router, or a modem + router combo). Most of the few houses that need an extra switch will probably (I'm guessing) opt for a considerably cheaper dumb switch without port-based QoS. My guess is also that most people who know what QoS is will opt for something that lets them set up priorities based on packets and protocols rather than ports. All that said, if you happen to have, say, a VOIP phone, a HTPC server, a couple regular PCs that just use the Internet, and maybe a teenager that you'd just love to de-prioritize, this makes things simple. I just doubt the people who are the most likely to find a product like this useful are tech savvy enough to realize it or have enough networked devices to need it. I'm also not sure I managed to make my network busy enough to really get the QoS in to play. I could stream various videos and play a multiplayer game and such on different computers just fine.

Pros: This is an UPDATE to the Eggxpert Review I wrote, and I was dissing the router because of the 1 year warranty...

Cons: And, sure enough, the product has died. I hate this planned obsolescence stuff that shifty manufactures build into products. And WD is as shifty as they come while they are price fixing hard drives with Seagate. Anyways.

Overall Review: Enough said, I was 100% RIGHT, do not buy switches or Ethernet stuff from WD. Netgear or anyone else with a long warranty is best.

Manufacturer Response:
Hi Darrellx, Please allow us to apologize for the inconvenience you have experienced with your My Net Switch, as this is not the typical experience with either the device. Western Digital stands behind the provided warranty, and we would like the opportunity to resolve this particular issue for you directly with a positive resolution. Please contact our My Net support team via email or phone below and mention this Newegg review so we get you in touch with the appropriate team member. http://support.wdc.com/contact/contact.asp?lang=en&ct=networking (855) 842-5370
Lewis C.
Ownership: 1 week to 1 month
Verified Owner
Works fine but product received was refurbished. The product was not advertised as refurbished.6/30/2020 12:38:16 PM

Cons: None to speak of, but it is a bit pricey

Overall Review: I've been using a pair of these switches in my home network for quite a while now. I specifically like the fact that the LEDs turn to amber or green based on speed (100mb vs gigabit). I had a finicky NIC on my home server a while back that kept reverting back to 100mb and the switch let me know. The unit is a bit pricey (retail) for a plastic switch, but it serves its purpose quite well.

Pros: No telling what this machine can do!

Cons: Power source was not shipped with the switch.

Overall Review: Would have loved to give this a try but without the power cord that was not in the box I will have no chance.

Manufacturer Response:
We appreciate your feedback and apologize for any inconvenience you may have experienced with the My Net Switch, as this is not the typical or intended experience with the product. We do apologize for the missing adapter. You can contact us at any time and we will be able to send the adapter to you at no cost, in the interest of customer service and satisfaction. You may contact us at 1 (800) 275-4932, or via our support website at: http://support.wdc.com/rs/. Please indicate within the online case creation or with the first support agent you speak with, that you are responding to a Newegg review, so we route you and your information to the correct team members.