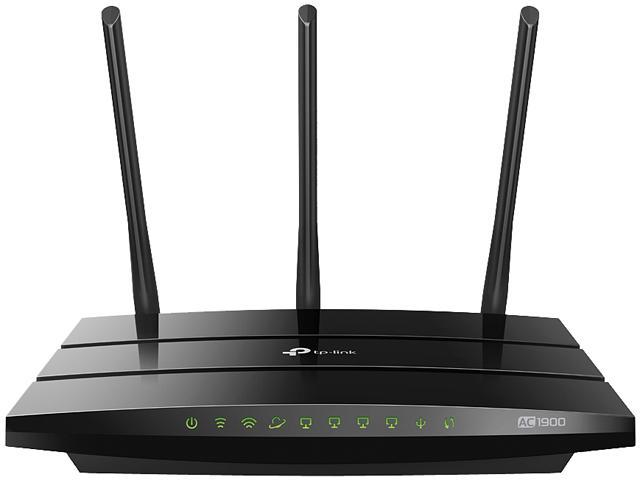 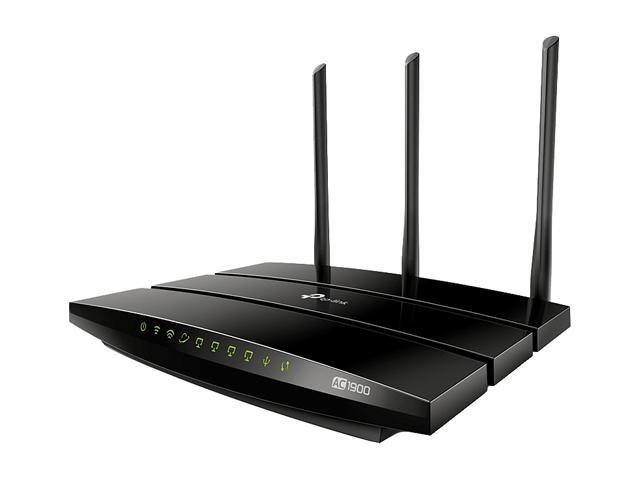 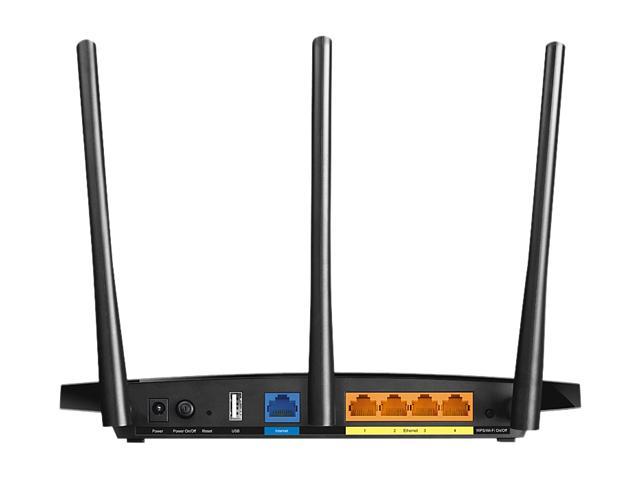 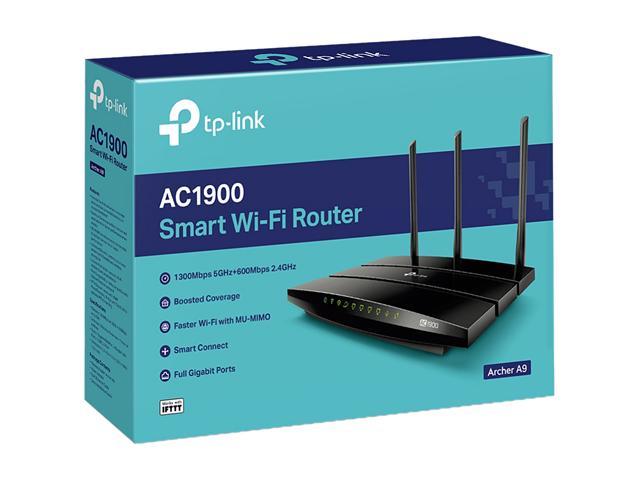 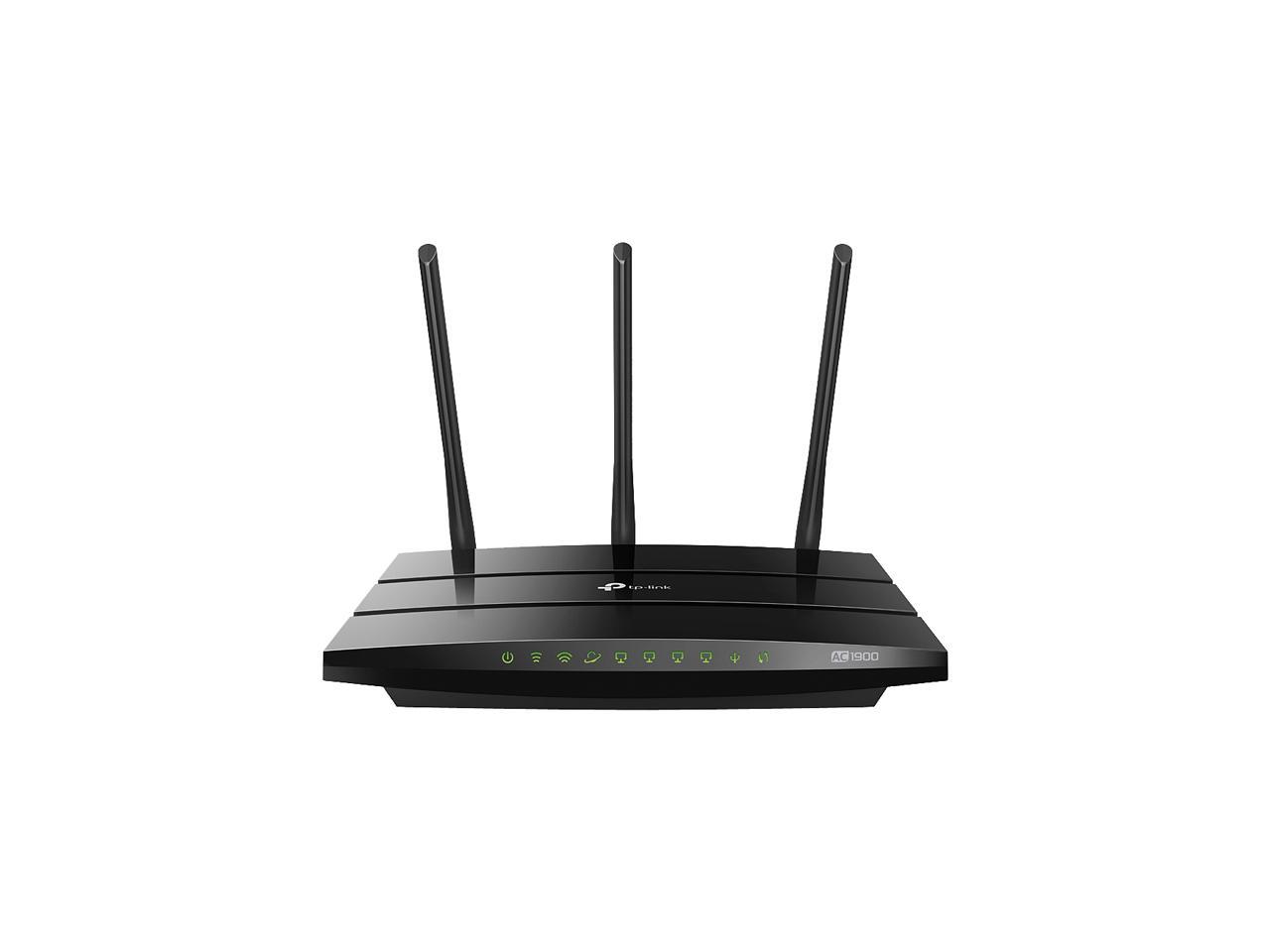 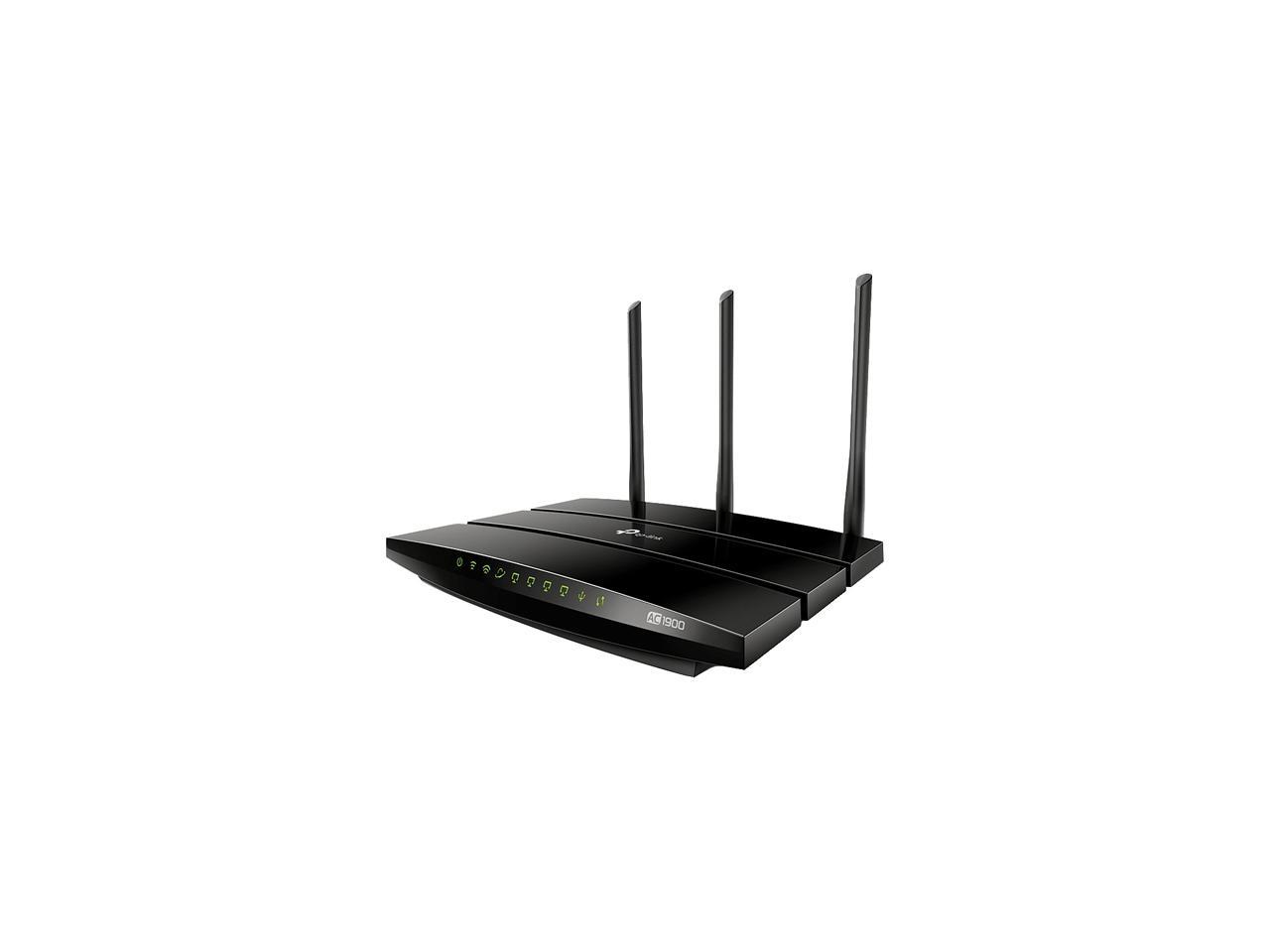 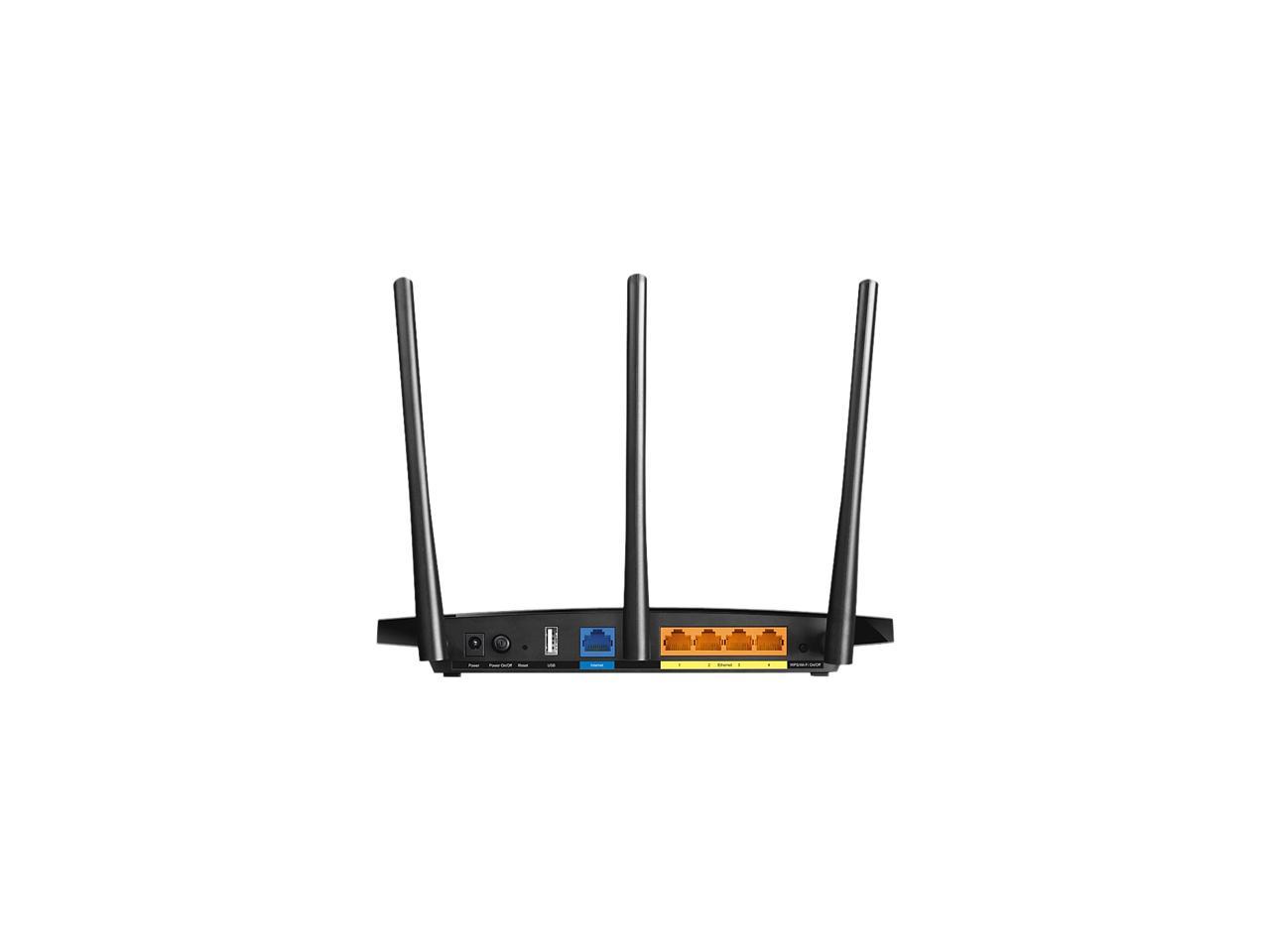 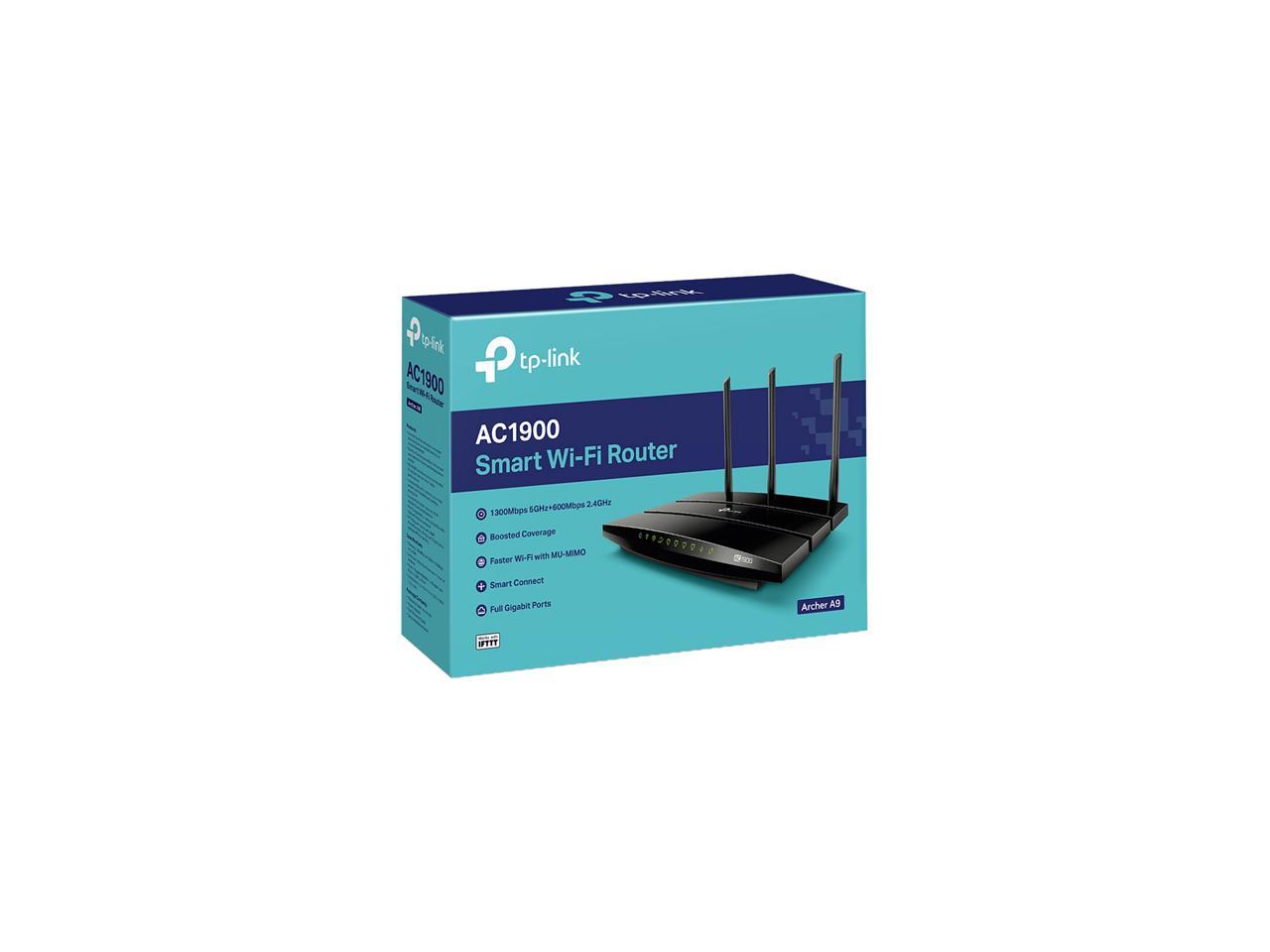 The TP-Link Archer A9 router's dual-band operation, MU-MIMO technology, and blazing-fast wireless speed of 1,300Mbps on 5GHz and 600Mbps on 2.4GHz, deliver smooth performance on multiple devices for bandwidth-intensive applications like gaming, video streaming and video chat. Four antennas (three external + one internal) enable extended coverage, while beamforming technology helps direct and concentrate signal towards your devices for the best possible signal strength. Four GbE LAN ports are ideal for wired connection with your game console, gaming desktop, streaming player and more. A USB port is also built onboard that makes it easy to share files on a thumb drive or an external drive. For your convenience, a mobile app is available that allows you to set up your router and control and manage your network from your phone or tablet.

Three external antennas and one internal antenna cast Wi-Fi signals to every corner of your home. Beamforming technology detects devices—even if they are far-away or low-powered—and concentrates wireless signal strength towards them.

Smart Connect helps the router automatically switches each device's connection to the best available Wi-Fi band while Airtime Fairness prevents older devices from slowing down your network. With both working together, everyone can enjoy smoother W-Fi experience without lag. Strong Guarantee for Your Wi-Fi Security

Archer A9 improves your online safety and security by providing advanced features and technology like Parental Controls, Access Control and VPN Server, etc. Furthermore, you can benefit from the very latest security enhancements—WPA3—if you keep your router's firmware up to date.

Brain of your Smart Life

Working with Alexa and IFTTT, Archer A9 acts like a brain in your smart life. You can easily control your network via simple voice commands by Amazon Alexa and make your life smarter and easier with IFTTT.

Set up Archer A9 in minutes via its intuitive web interface or the powerful Tether app. Tether also lets you manage its network settings, including parental controls and media sharing from any Android or iOS device.

Features at a Glance

Learn more about the TP-Link ARCHER A9

Pros: - High performance - Handles a lot of Wi-Fi traffic well - Stable (which is huge given my recent issues with another router brand) - Easy to use - Great value

Cons: Haven't found any yet.

Overall Review: I bought this router to replace our Netgear R7000 that had worked quite well for a couple of years and then became mostly useless after a firmware upgrade. The only solution to the problem I could find with the Netgear router was to uninstall the "upgraded" firmware and roll back to a known stable version, which worked for the most part. I still had connectivity issues but nowhere near as bad as with the "upgraded" firmware. From research I did I found out that Netgear's firmware is made by some third party company. Netgear's support is virtually non-existent other than a user-to-user forum where Netgear owners help one another. Once I had the TP-Link router, I felt like I could run the risk of "bricking" my Netgear router with third party firmware called Fresh Tomato, so I installed it. The install was successful but I haven't actually tried it yet because the TP-Link Archer A9 has been living up to expectations and it's hard to want to play with a stable network once you've reached stability. This router is fast, stable, and simple. I also got it for probably half what I paid for the Netgear R7000 and performance is as good, and if you consider stability, then performance is MUCH better, because what's performance without stability.

Pros: Easy setup, everything works right out of the box, connects to all devices. Good strong wireless signal at 75 feet!

Overall Review: Bought this shopping for good wireless range and can still have wired connection at location. Furthest laptop is 75 feet away and it's showing the strongest signal ever (compared to previous routers I've had)

Pros: Plugged it in, followed easy directions and it pretty much set itself up. Connected all devices to it without any hassles. Faster stronger signal

Cons: short electrical connection wire to the plug in.

Overall Review: This router was easy to set up and has been working for the last month without a problem. Coverage in our apartment is way better/stronger than the router we retired

Overall Review: good router always did like tp-lnik a very good brand not like links your netgear

Pros: Almost a plug and play setup if you're using a cable modem with dynamic IP. Plugged it all up, restarted my provider's modem and was online. Just logged into it to setup wireless.

Overall Review: Highly recommend router. My PC in the backroom went from 20meg down to 100meg down (which is what we pay for) using 802.11ac

Pros: I finally got fiber optics and this really helped!!

Cons: It is bigger but as long as it works well I really don't have anything negative at all.

Overall Review: It is so good and have no problems at all. Thank you for selling nice things that we are all looking for!!

Pros: -Good bang for the buck -coverage for moderate sized home is good -enough ports to connect several devices via ethernet -Easy set up through web or phone app

Cons: -I should have done a deeper dive into what was entailed with the parental controls of this unit. You cannot do a tiered block of web content.( i.e.: minimal, moderate, maximum) like Netgear uses. For a parent with web savvy kids, you have to enter a complete domain name to block any adult content or other sites you may want blocked. As everyone knows there are too many adult sites to manually enter. Biggest con for me, thus the 3 star rating.

2 out of 3 people found this review helpful. Did you?
Manufacturer Response:
Hi Mike, Thank you for your review. We appreciate your constructive feedback regarding the Archer A9's parental control features, and based on your particular needs, we would suggest considering one of our HomeCare equipped routers, which provides robust network management features, including a parental controls suite that would suit your particular needs. You can see an example of some of the parental control features for our HomeCare equipped standard home WiFi routers here: https://www.tp-link.com/us/support/faq/1707/ We also offer a Mesh WiFi solution in our Deco series, many of which also support HomeCare parental controls, as shown here: https://www.tp-link.com/us/support/faq/1598/ If you're ever unsure whether a product is best suited for your needs, please feel free to email USSupportTeam@TP-Link.com and we'll gladly follow up. Thank you, TP-Link Support USSupportTeam@TP-Link.com
Brian W.
Ownership: 1 week to 1 month
Verified Owner
Went in fast. Runs faster.1/6/2021 6:28:37 PM