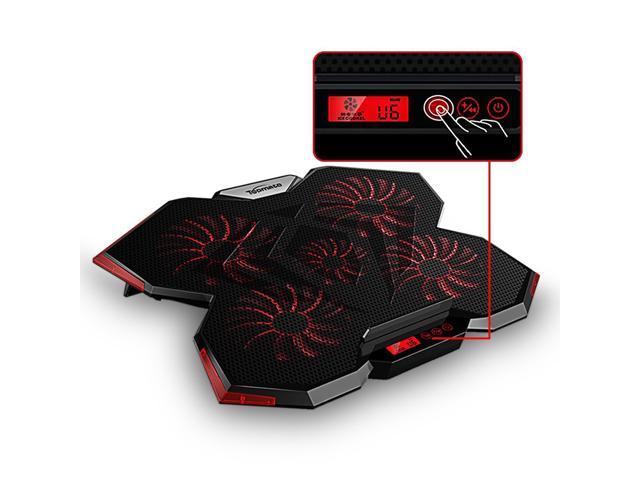 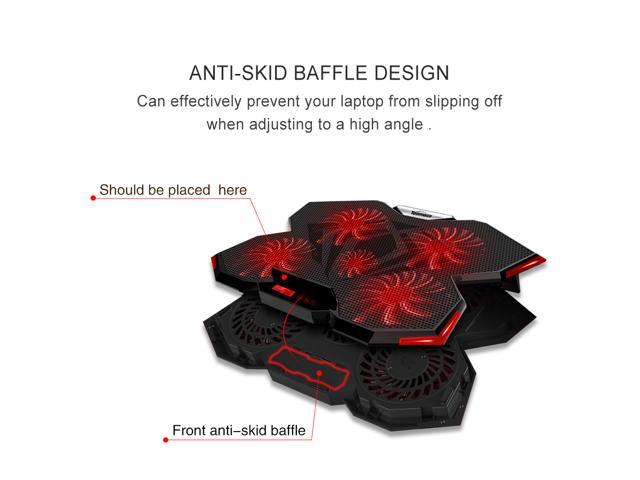 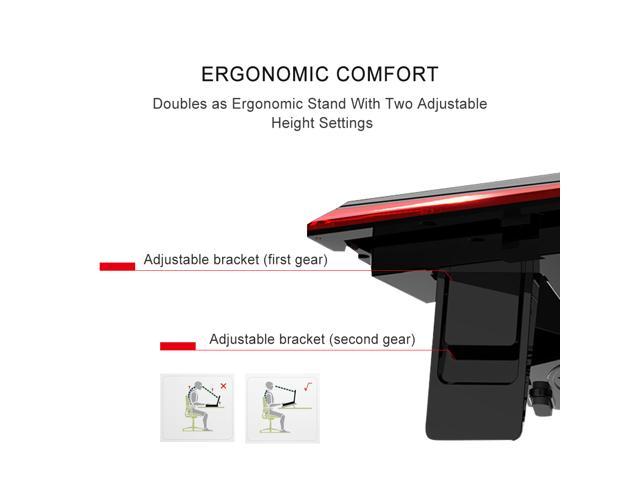 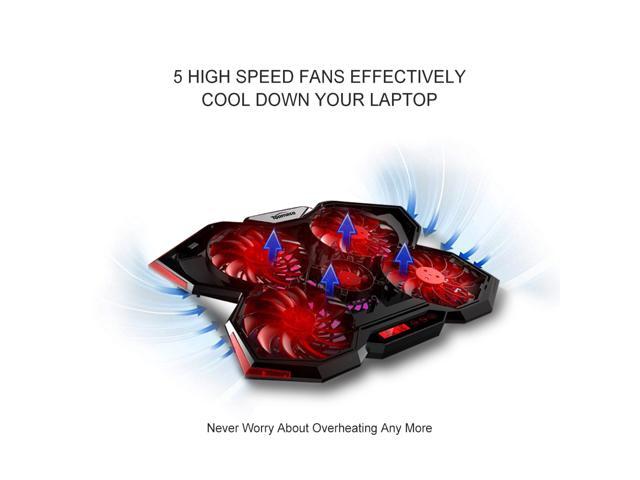 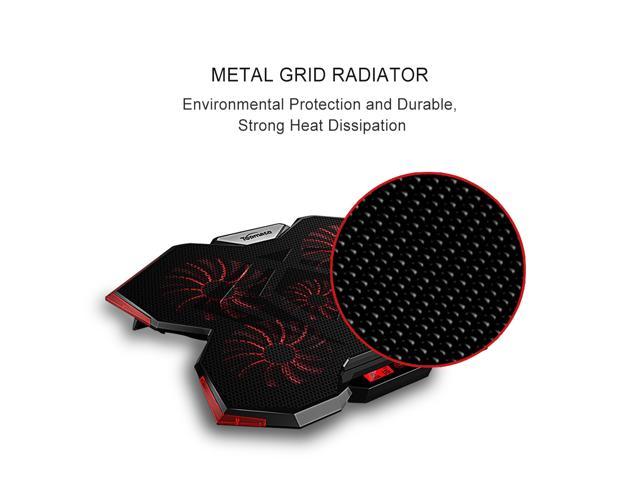 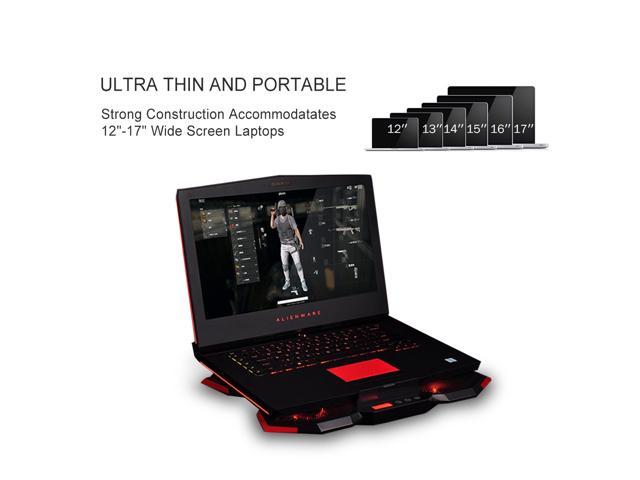 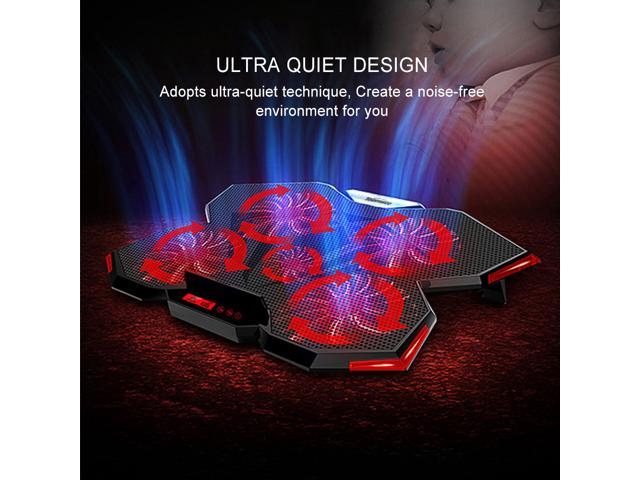 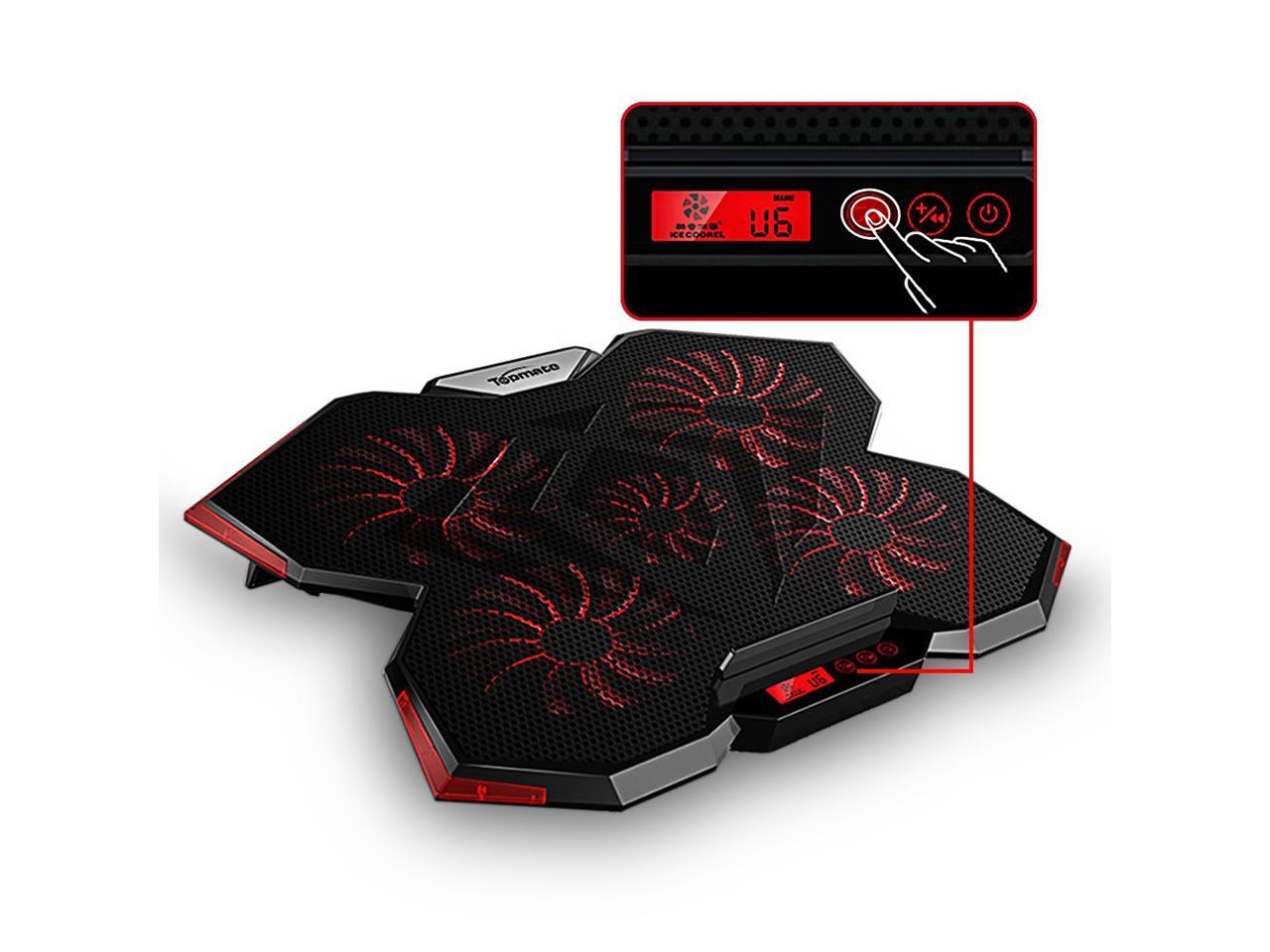 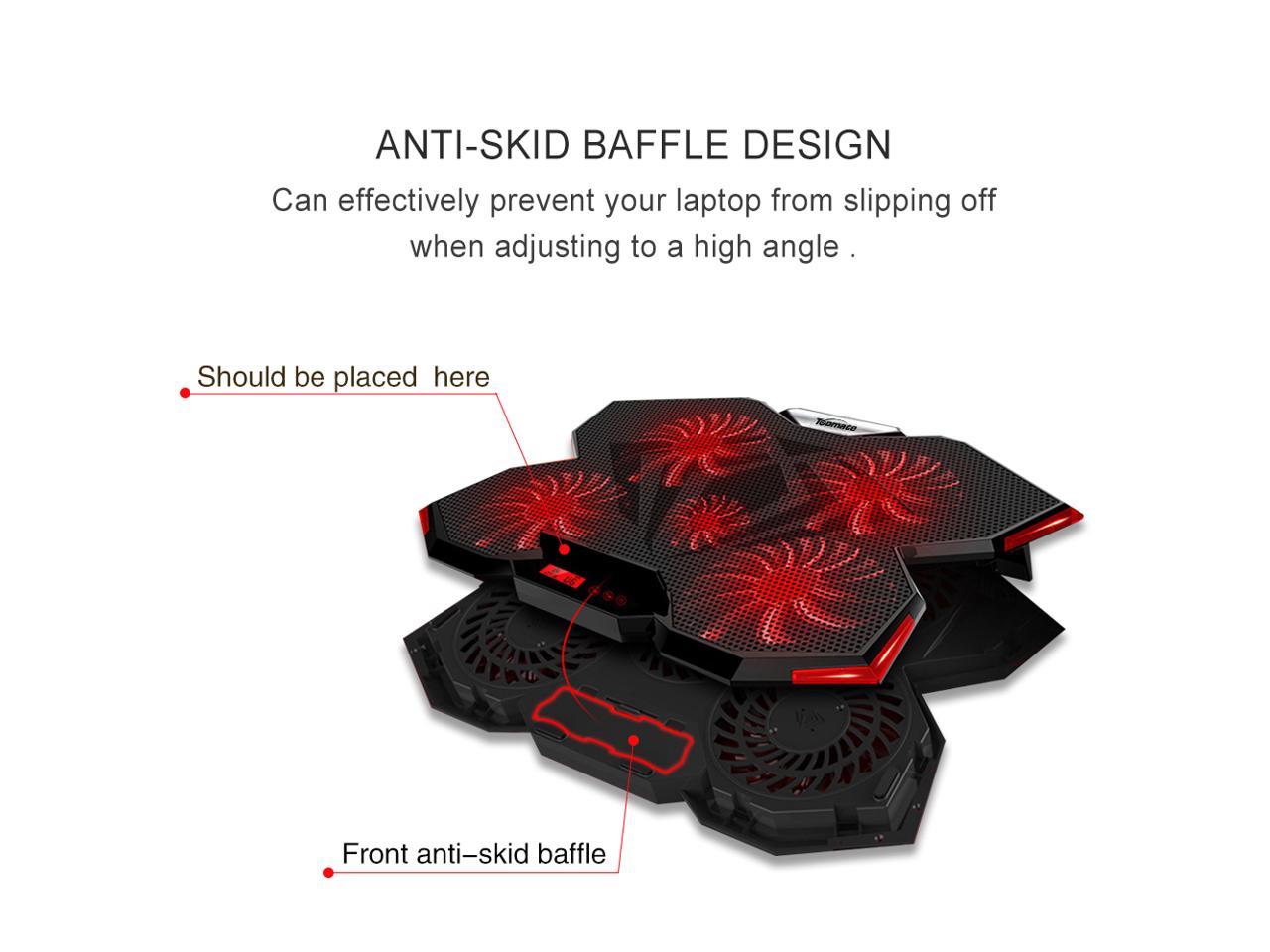 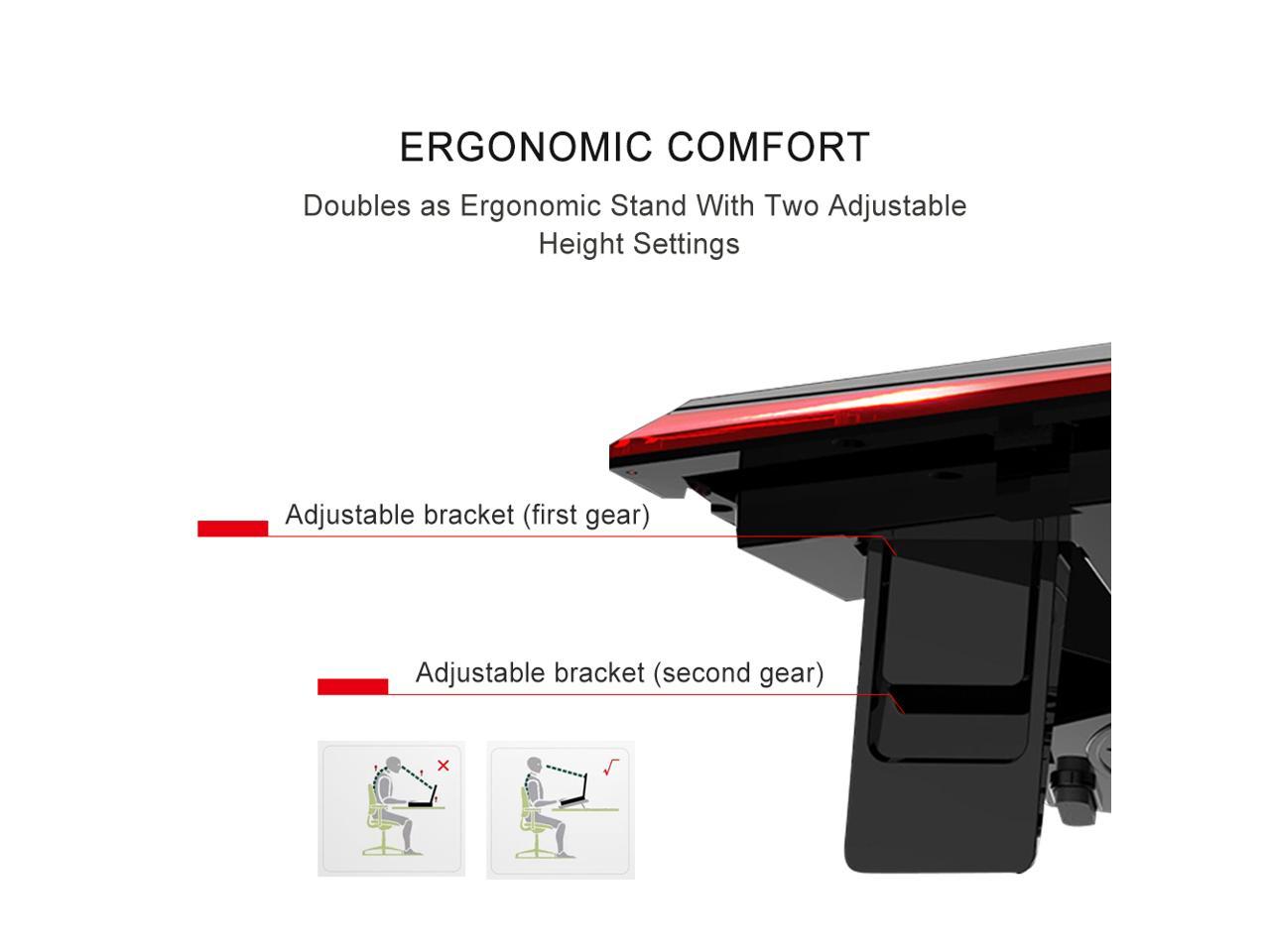 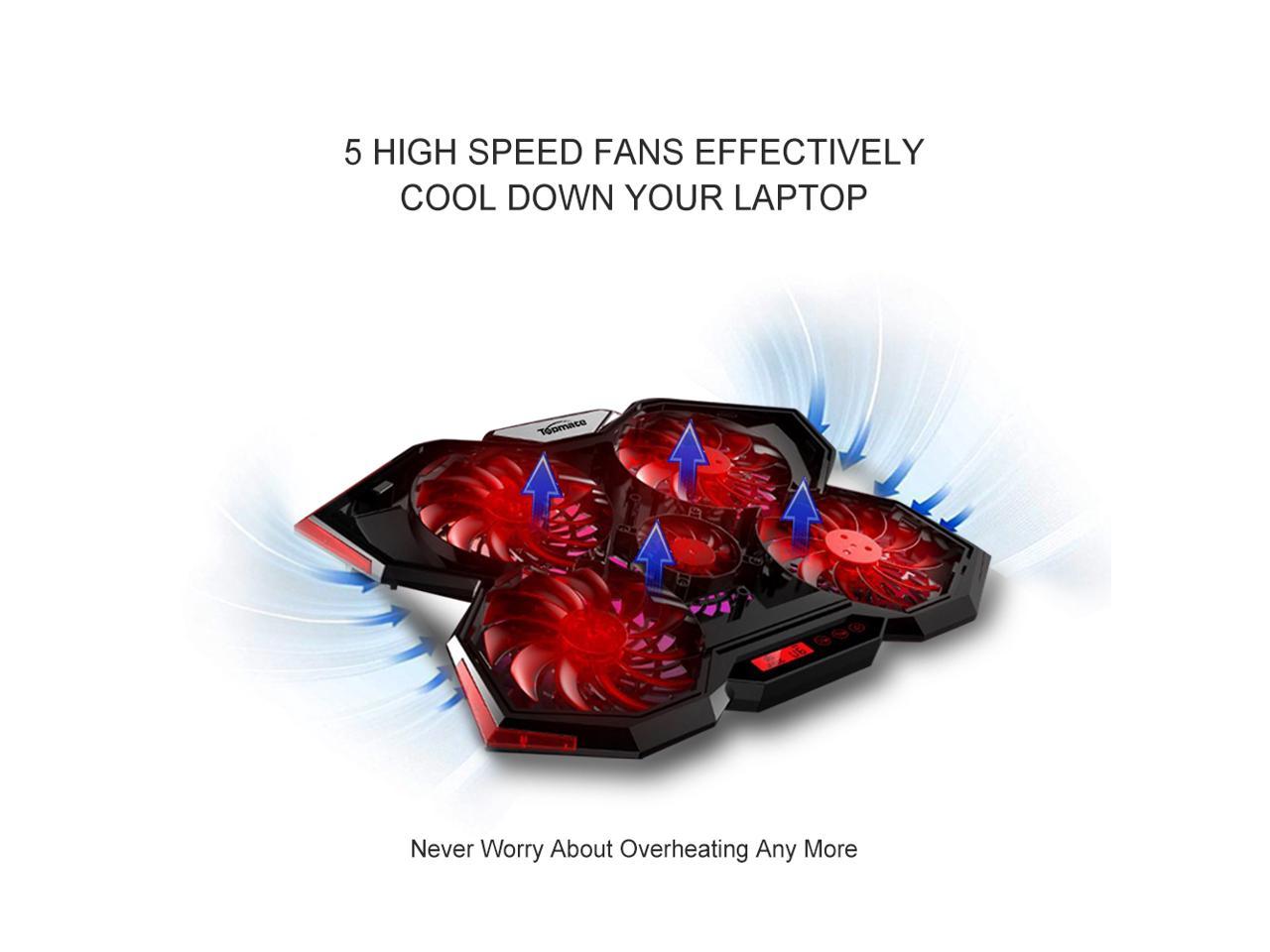 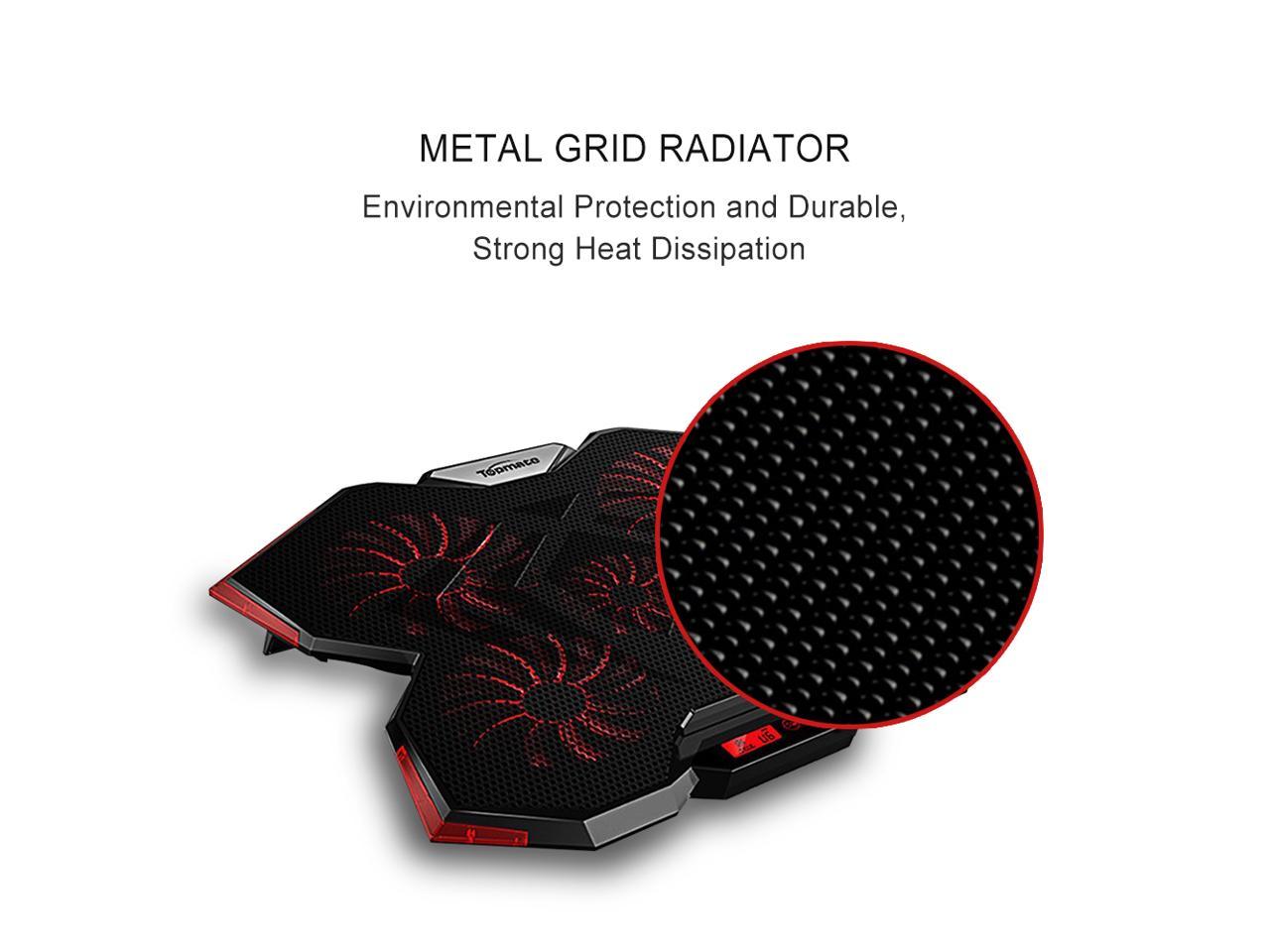 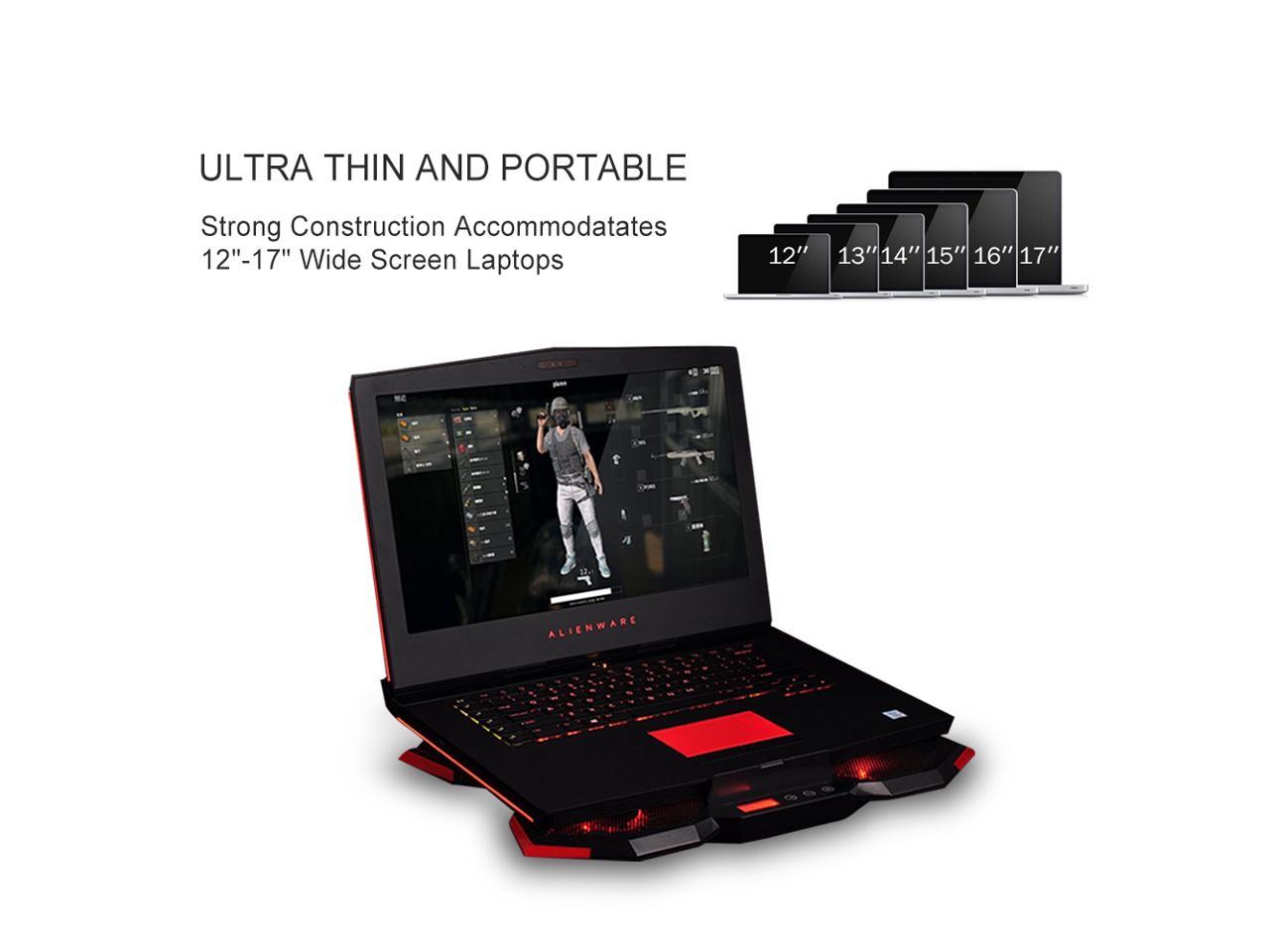 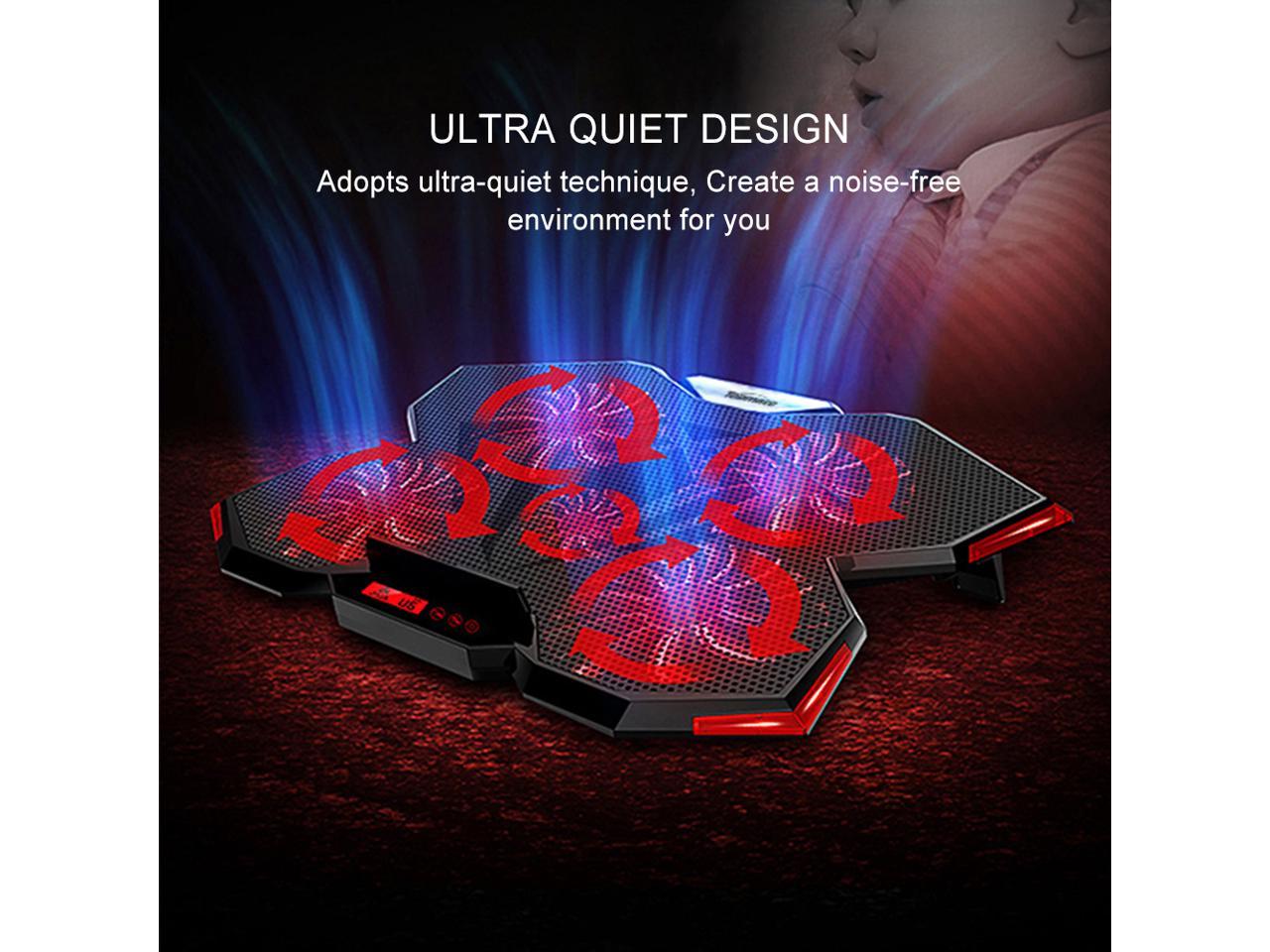 Pros: it's whisper quiet at the highest setting, and, while the total volume of air moved isn't a whole lot, the configuration of the fans sees the airflow well-distributed;VIRTUALLY,, the whole underside of the laptop is accounted for. With my last cooling pad, my temps with a Core-i7 2620m were ~50-53 / idle, 65-75 /full load. With the TopMate, current idle: 38-40, load: 58-60...VAST improvement... It's amazing what being able to breath makes...So, despite cons and ingenuity required to make performance optimal, I'm very happy with my purchase. However, due to the most notable cons, I cannot award more than 3 eggs due to designer flaws.

Cons: As indicated by the above 3-egg rating, and likely depending on the laptop to be used with it, there are several key flaws that will need to be addressed prior to using this cooling pad with any of the Dell Precision Workstations. 1) and most significant: The surface is slick as owl #@%t...if you are using any laptop whose feet are furthest to the corners of the base, and without rubberized/non-skid finish on the access panel, your notebook will slide around if you so much as blow on it. Manufacturer provides an optional bracket (which can be inserted into a slot on the front, in order to accommodate notebooks smaller than 17.3", or stowed in a handy compartment on the underside), which you will not be able to use if your CPU/GPU intake vents are on the underside of the laptop. In a nutshell, if you are able to use the bracket without compromising air intake, the only the user side is afforded any stability--side to side shifting is both effortless and open-season on your last nerve! I strongly recommend getting some of that non-skid fabric that's often used in kitchen drawers to prevent flat-wear from sliding around when opening/closing them. Only a couple square inches of fabric are needed to keep the notebook from shifting and won't block any significant airflow. 2)This probably only applies to my leisurely / like-minded colleagues: If you like working whilst perched at the foot of the bed, one that's actually soft enough for sleeping, you'll need to figure some way of keeping the feet of the cooler from sinking into the mattress/sheets, thus defeating the purpose of having the cooler to begin with. Whilst I'm sure production cost is a chief consideration for the manufacturer, if I had a dog in the hunt, I would suggest the rear height adjuster be one unit that folds down the full width of the cooler. As it is, there are two little fold-out flimsy (and pointy) feet, ready to stab deeply into any pliable surface. 3) It wouldn't hurt to have some sort of clearance in the front; perhaps, two low-profile rubber feet at the corners, because even on a tabletop, the clearance for airflow underneath for the front fans is almost negligible, due to the angle of elevation created by the rear height adjusters. Basically, the front of the unit is resting directly on the fan grates. I predict those fans will fail before any others.

Overall Review: If you don't mind modifying it straight out of the box to address the slippy-slidy and underside airflow accommodation, then this cooler will probably be your cat's meow, because, under ideal conditions, it's likely the best performing air-based notebook cooler I've ever used. Therefore, with that said, I would definitely recommend it to a friend.

Pros: -The cooling from the fan was good -the metal grid is nice

Cons: -died after 2 months of usage

Overall Review: the usb cable that you attach to the cooling fan to your laptop would heat up to the point of melting and killed this product, before that it would jitter the fans and the lights randomly. would not buy again

Pros: Fans at the speed you need with the touch buttons. The fans run quiet even at 2400 rpm. It keeps my desktop replacement laptop very cool considering it runs very hot under heavy work loads.

Cons: The bottom is a high quality plastic but would have preferred it to be made of 100 percent metal like the top of the cooler but considering most coolers are 100 percent plastic this is not bad.

Cons: One of the main fans came loose and makes an awful racket after about 9 months of use. No easy way to pop it back in place to spin quietly. The remaining fans not adequate to cool my laptop when gaming.

Overall Review: I would not recommend this product.

Pros: fans are ok. I wish they pushed more air but they are ok. it is not too loud. Used for HP Omen 17T 9980H and 2080RTX, it helps keeps temperatures to get a little more under control but really nothing fancy.

Cons: HP Omen 17t fits on the cooler but the cooler is too small with 0 spare room anywhere. I was hoping to use this cooler on top of a lap desk while in bed but forget about it, frankly the laptop is bigger than the cooler. More at risk for a stupid accident as the cooler size is quite inconvenient for +17 inches

Overall Review: If you are looking for heavy duty gaming air cooler for 17 inch and + then this unit is likely not for you.

Pros: Price , shipped fast, I guess this is a Am-a-zon Product as it came shipped from them. Super Quiet cant even hear it running. I use this as a Lap Table, and play graphics heavy games on it for hours, this effectively removed the heat from my lap, and provided a level raised spot to rest my computer/ I do use it at my desk occasionally and it works fine there also.

Cons: Sadly i Think the port on the back that is usb is cheaply installed, one side seems to be loose and while using it stopped running and had to use other port that was tighter. Ive never pulled on cable or port and its been plugged in seince day 1. Only been using less then a week now. So quality is probably long term sub-par. The bottom half like other poster said is cheapo plastics, and is flimsy, I have noticed putting any extra pressure from bottom can make the fans rub = o clearance and its super flimsy.

Overall Review: I would reccomend to anyone looking for a cost effective cooling solution. This is kinda overkill probably being led and 5 led fans etc. but its also 30$. I expect the led and product to last a minimum 12mo to feel it was a good buy, i'm not sure if it will truly make it that far knowing i will put it to use 3+ hours daily every day.

Overall Review: hi friend i give my package. thank you

Pros: - SUPER cold on max setting (6 different speeds), I personally keep it there. My trash laptop remains ice cold while running a Pokémon Omega Ruby on a 3DS emulator, and im running it at 4x native 3DS resolution. Despite the tax on the internal gpu, it remains cold always, even with hours of straight use. - The lights are pretty cool, its always red, no other colors. RGB would have been nice considering this is kind of expensive, but I'd rather have solid color fans that run at 2400 rpm than RGB ones that run at 800 rpm. - It has 3 touch buttons, on/off, faster, and slower. It's not a touchscreen so much as 3 trash pressure sensors, but they work ok (you just might have to slap it a few times).

Cons: - Only 1 color choice - Trash but passable touchpad - The lights and fans started flickering a couple times, not sure why, but unplugged and replugged and was fine.

Overall Review: - Overal, solid cooling pad. Pretty on the surface, but a little barebones around the edges. At the end of the day, it performs extremely well at its intended function, and isn't that all you can ask for?