Feel 100% satisfied with your purchase -- with no restocking fees & no return shipping costs* within 30 days of delivery. Learn More
Price Alert
Add To ListFound on 19 wish lists 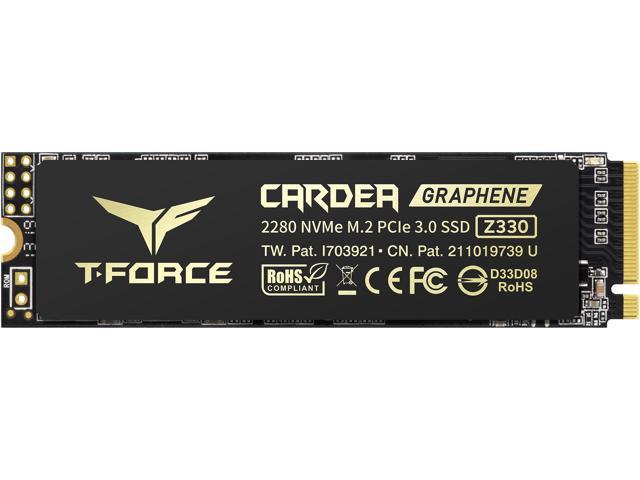 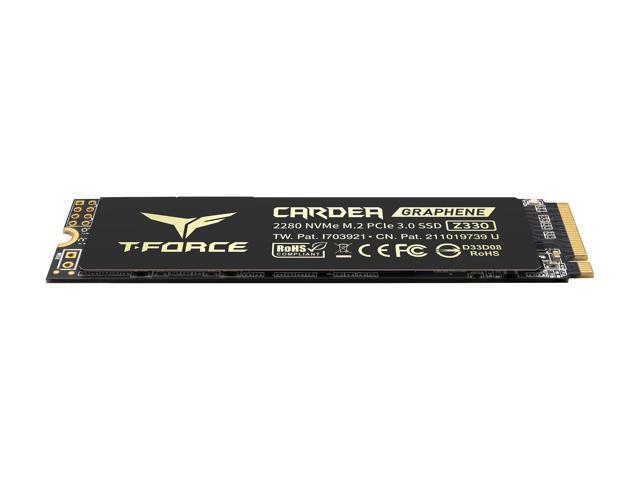 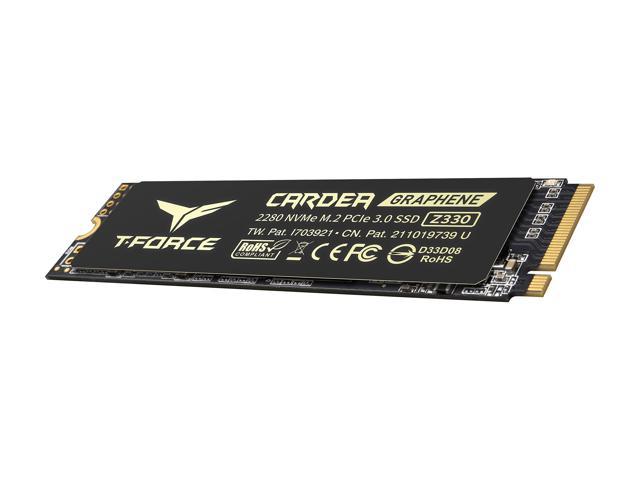 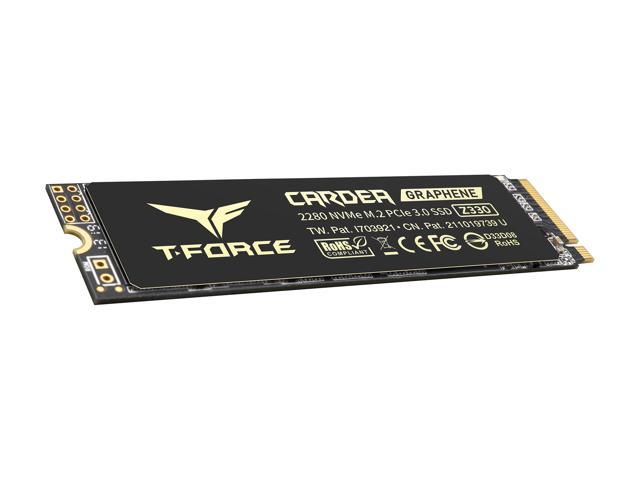 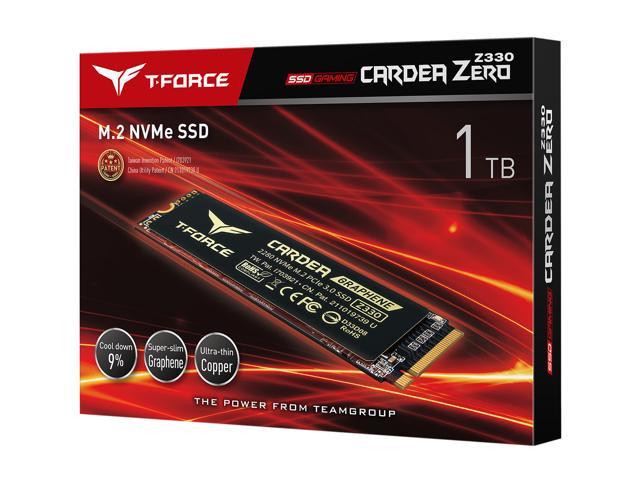 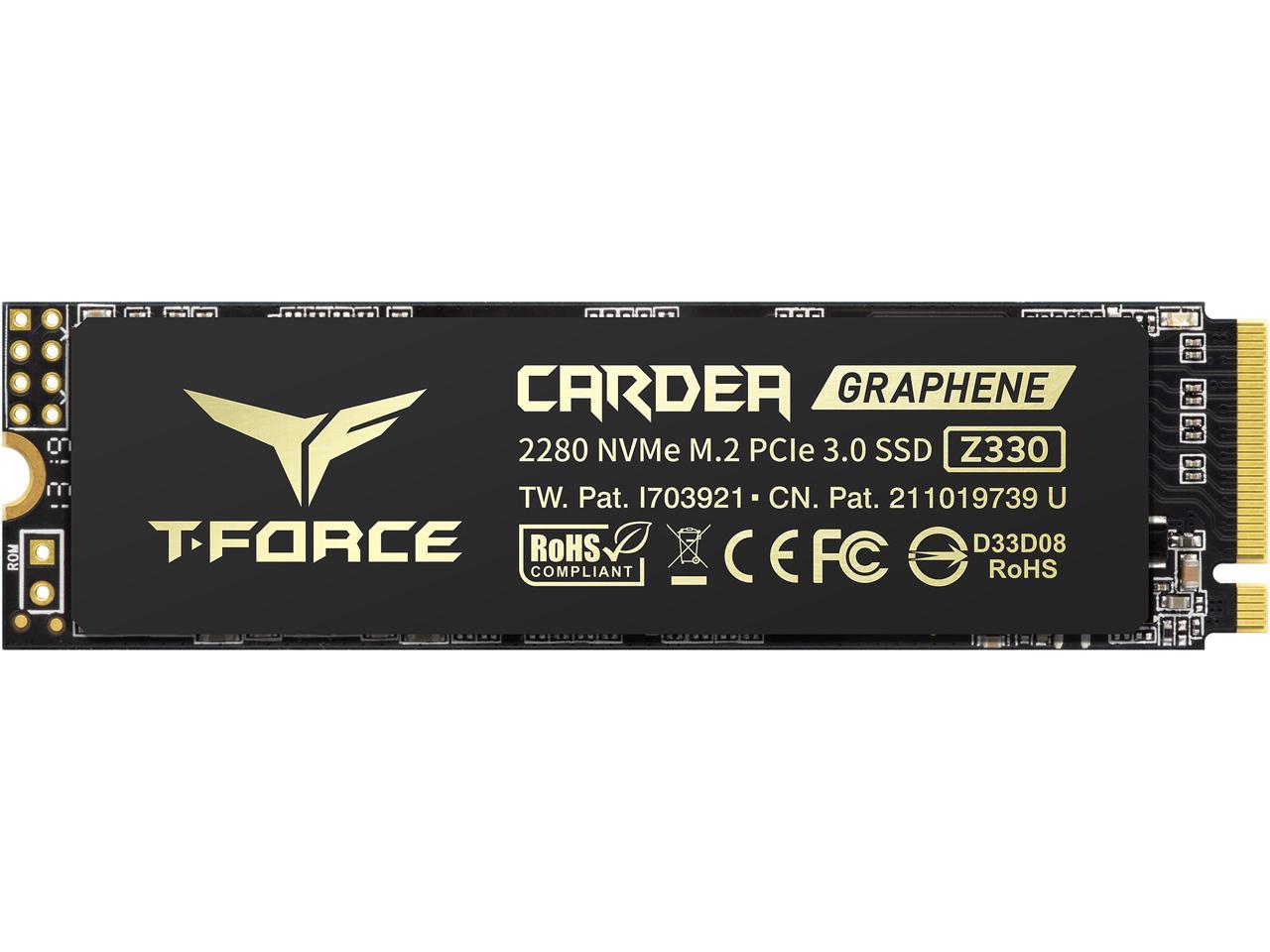 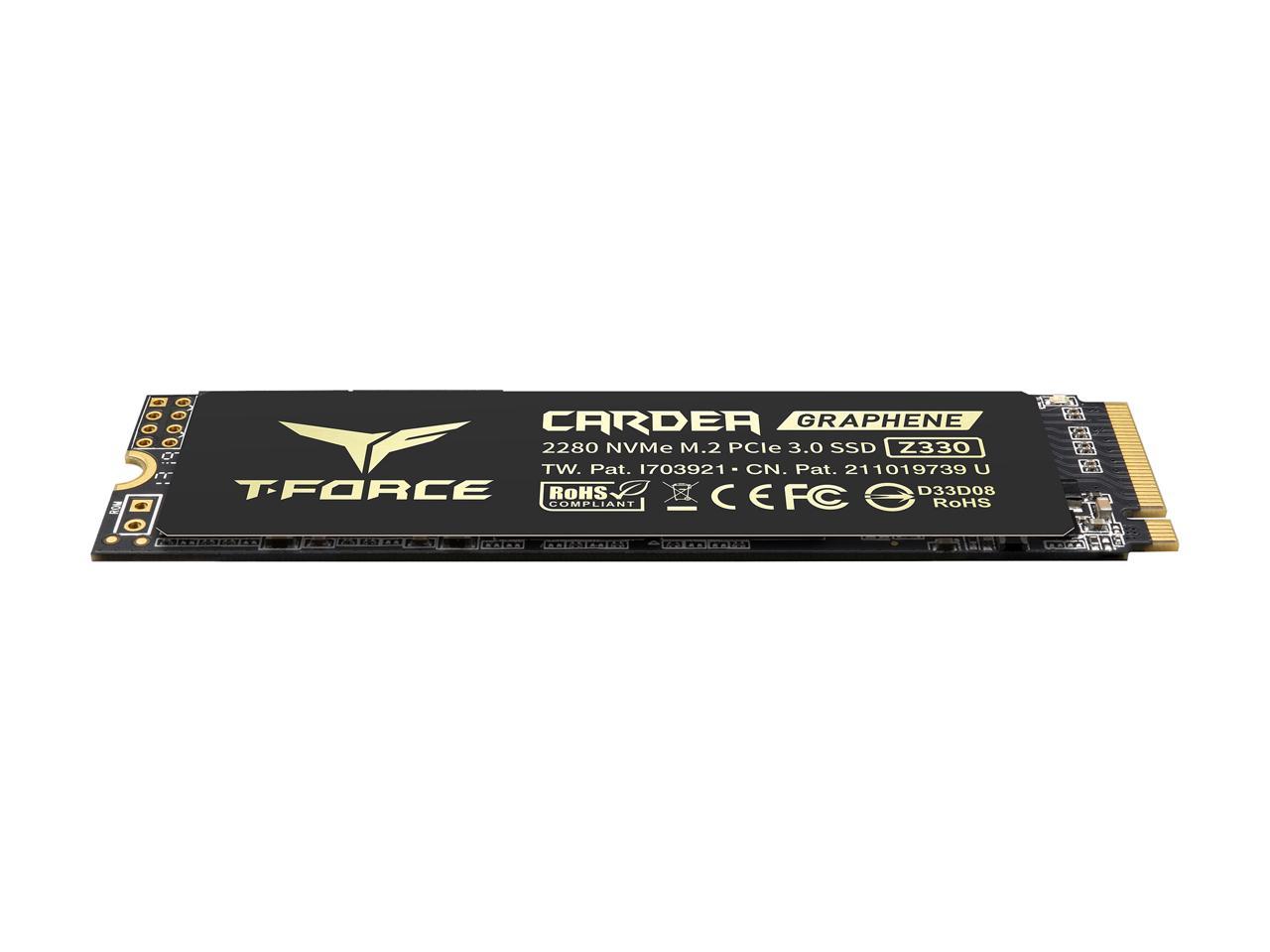 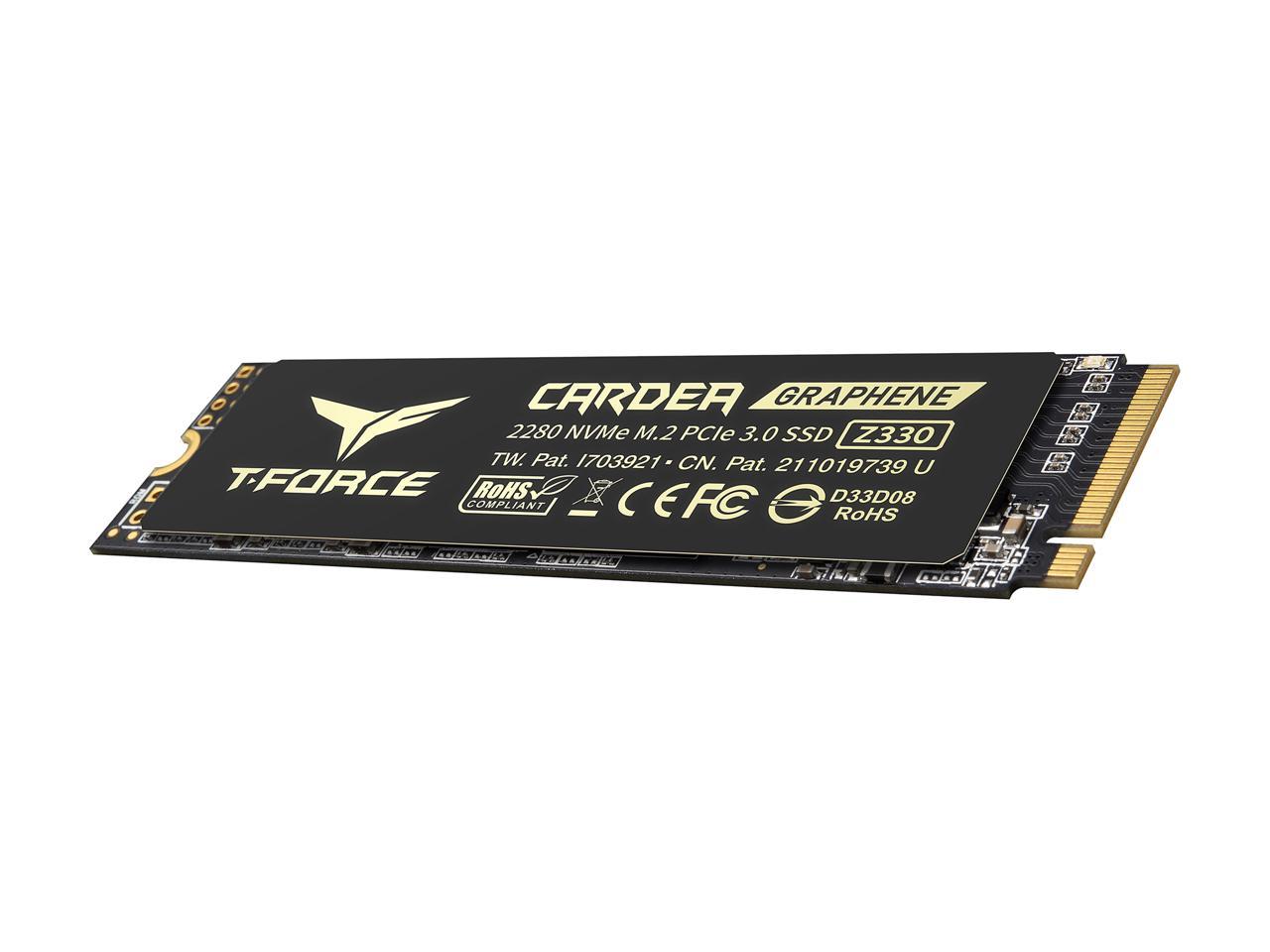 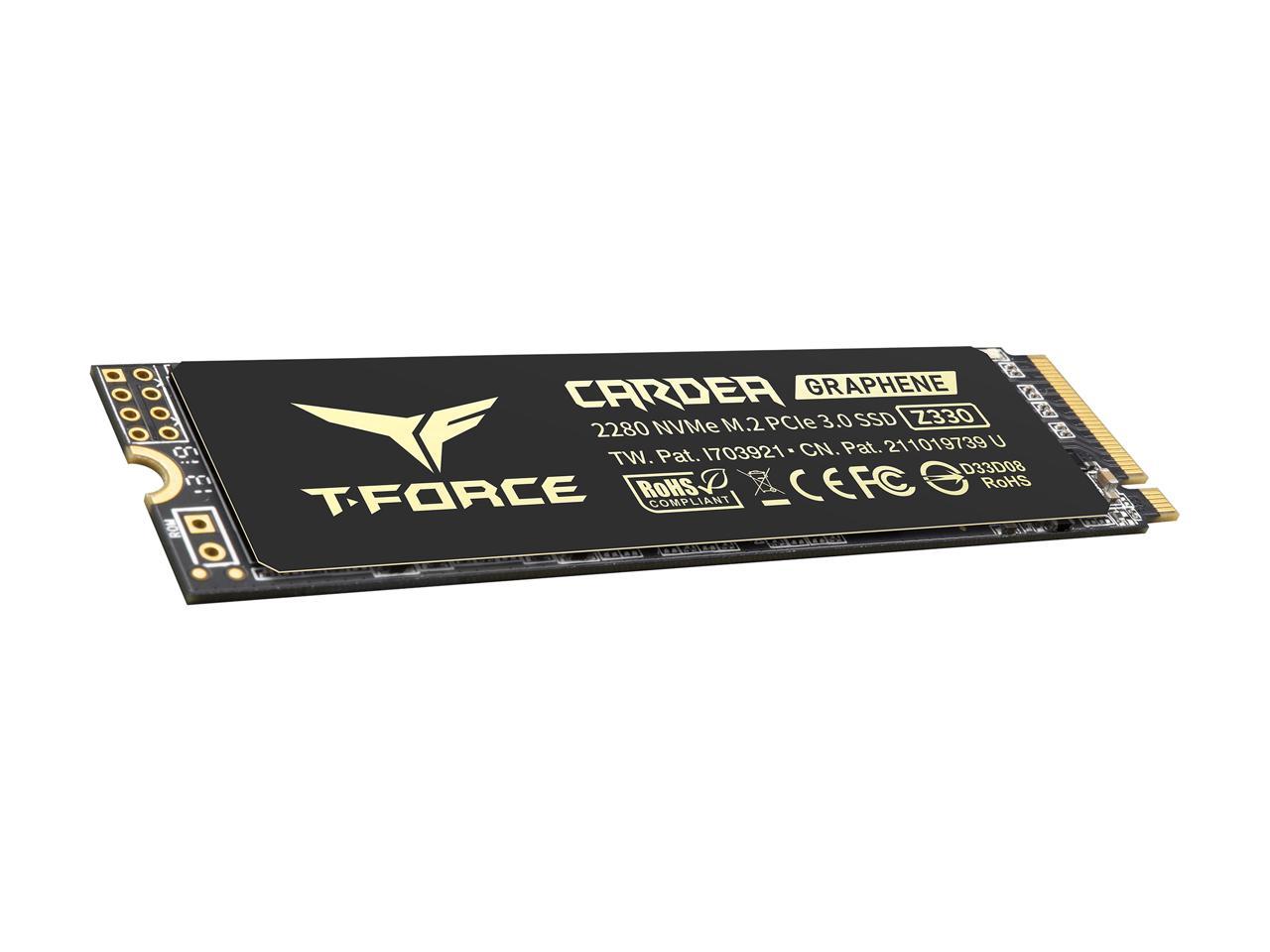 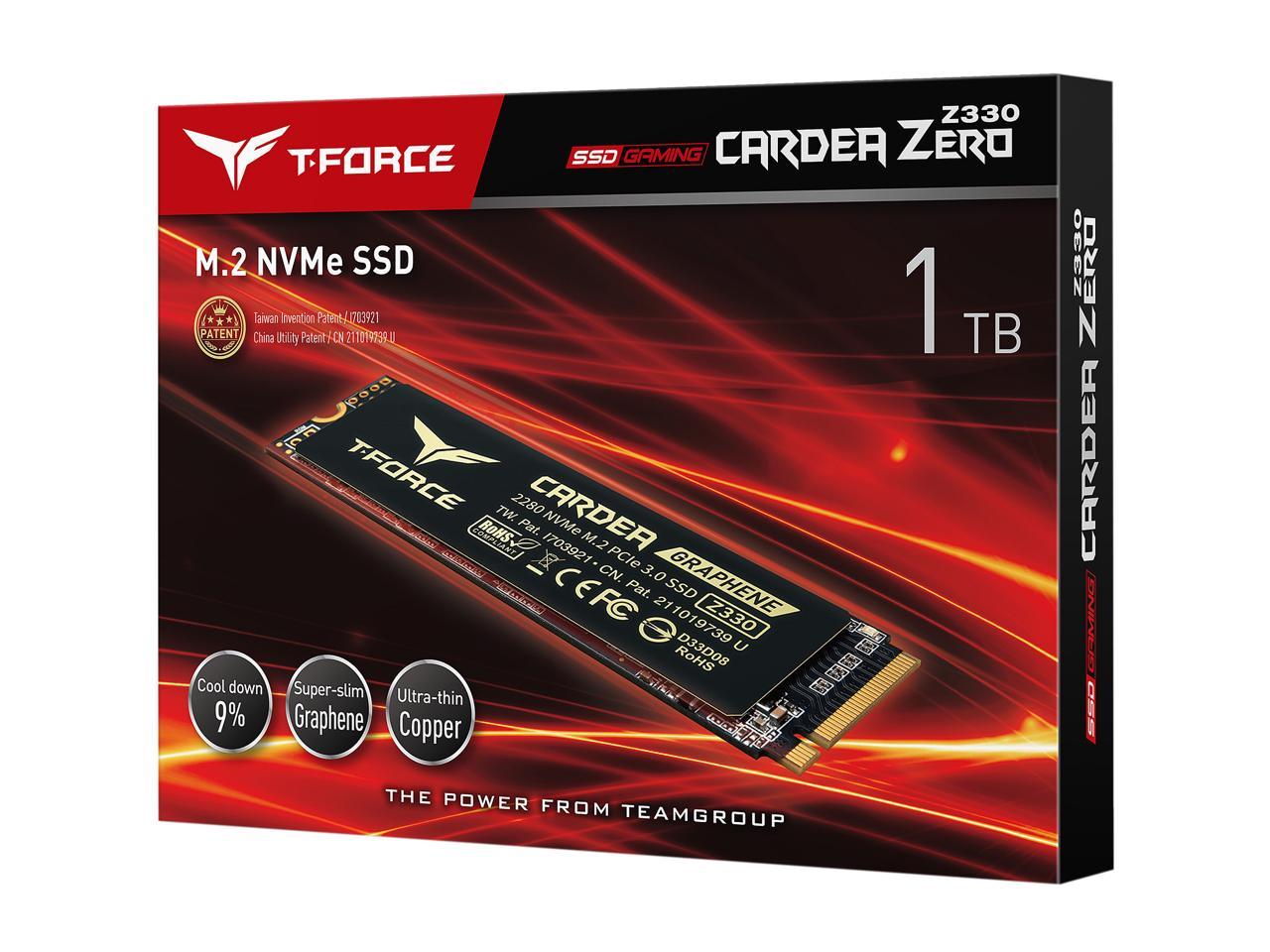 [1] This product is compatible with Intel and AMD platforms, and the performance result is tested on a motherboard that supports PCIe 4.0 interface by the T-FORCE internal laboratory. The actual speed may vary depending on the software and hardware conditions of the platform.

T-FORCE CARDEA ZERO Z330 and Z340 M.2 SSD have patented graphene copper foil cooling module developed by the T-FORCE laboratory. The graphene, copper foil and insulation layer are glued together by special stacking technology. The thickness is less than 1mm which can effectively eliminate the problem of limited installation space.

T-FORCE CARDEA ZERO Z330 and Z340 M.2 SSD have passed the long and rigorous test and burn-in test by T-FORCE internal laboratory. During 3 hours of continuous reading/writing, they are able to provide more than 9%[2] of cooling effect! These three elements showcase a superb three in one heat dissipation performance: thermal conduction (graphene), thermal radiation (graphene) and thermal capacity (copper).

[2] The experimental data is based on T-FORCE internal laboratory's test result. Under the same condition, the temperature test data is according to the comparison of the non-heat spreader M.2 PCIe Gen4 x4 SSD and the T-FORCE CARDEA ZERO Z340 Solid State Drive. The relevant test environment is simulated under a fanless environment using mask. The actual speed may vary depending on the software and hardware conditions of the platform.

[1] 1GB=1,000,000,000 Bytes. In OS system, it would be displayed as 1,000,000,000 Bytes/1024/1024/1024 = 0.93GB
[2] Definition and conditions of TBW (Terabytes Written)are based on JEDEC standard
[3] Transmission speed will vary according to different hardware/software conditions, therefore the data can only use for basic reference.
[4] PCIe SSD works best under WIN8.1 and WIN10 operating system. Windows Operating Systems earlier than Windows 8.1 does not support NVMe Driver natively. Users will need to install NVMe Driver prior installing the SSD.
[5] The SSD is based on the TBW or Warranty period.
* All the test data is provided by TEAMGROUP's laboratory and the information of test data is only for reference. We reserve the right to modify product specifications without prior notice.

Pros: -This installed on a bare, WIndows 10 install without ANY issues. - Actually exceeded advertised speeds when tested - Runs cooler than expected, even when thrashing it

Cons: - A few fussy people I know didn't like the graphics on the heatsink. Mines under the motherboard heatsink, so didn't matter...and I genuinely wouldn't care anyways. Doesn't affect my score at all.

Overall Review: Here's the deal. I installed the drive, reset the motherboard BIOS, booted into Windows 10 auto-install without so much as a hiccup. I can honestly say that this is an unexpectedly good deal on a great drive. I plan to buy another, to use as my "Steam drive".

Overall Review: Popped the hood, dropped the drive, watched my speed go from 150mbs to 2500.So, like, that was exactly as advertised.I was replacing a 5400 rpm drive so I cloned it and copied it over, about 1 gb of data, and it took about 30 minutes total. But the entire process was staggeringly easy and it's been speedier all around since. Shouldn't have ever put that 5400 rpm drive in in the first place but SDDs were too expensive at the time.

Manufacturer Response:
Dear Jeff, Thank you for your 5-eggs review! And thank you for choosing Team's product! We are glad that you are satisfied with our TEAMGROUP T-FORCE CARDEA ZERO Z330. We appreciate your feedback. For Technical Support: techsupport@teamgroup.com.tw. For return, repair, or warranty concerns, please send a mail to rma.usa@teamgroup.com.tw TEAMGROUP
Andy L.
Ownership: 1 week to 1 month
Verified Owner
Good price, good performance6/11/2021 8:00:06 AM

Overall Review: Used in an external thunderbolt 4 enclosure. On my Mac mini I'm getting just under 1000 for write, and well above 1000 for read.

Overall Review: This product was shiipped really fast and it's still fast once installed!

Manufacturer Response:
Dear Stephane, Thank you for your 5-eggs review! And thank you for choosing Team's product! We're very pleased to know that the SSD you have purchased works great for you and that you received it faster than expected, it's nice to know as well that you had a great time installing our product. TEAM will definitely strive more in providing you with high-quality products at affordable prices. If you have any other concerns, feel free to let us know. For technical support: techsupport@teamgroup.com.tw For return, repair, or warranty: concernsrma.usa@teamgroup.com.tw TEAMGROUP
Anonymous
Ownership: 1 week to 1 month
Verified Owner
So far, so good6/11/2021 9:15:14 AM

Pros: Super fast data retrieval! I'm using as an extra drive in my video editing suite and this 2GB drive is excellent for source media folders in my projects.

Manufacturer Response:
Dear Customer, Thank you for your 5-eggs review! And thank you for choosing Team's product! It's nice to know that the SSD you have purchased works perfectly & for providing us with genuine feedback about our products. We can assure you here at TEAM that we will strive more in providing you with more high-quality products at affordable prices. If you have other concerns, feel free to let us know. For Technical Support: techsupport@teamgroup.com.tw. For return, repair, or warranty concerns, please send a mail to rma.usa@teamgroup.com.tw TEAMGROUP
A B.
Ownership: 1 month to 1 year
Verified Owner
Great performance & price for Gen 3 nvme M.2 drive10/8/2020 7:41:56 PM

Overall Review: Overall a good product that performs well for a Gen 3 PCI NVME M.2 drive looks good, performs as expected. no issues with running the drive or installing it.

Pros: Way better performance than my Stock M.2 My Dell came with

Manufacturer Response:
Dear Armando, Thank you for taking the time to write and giving us a 5-eggs review! We are glad to know that Team SSD is able to satisfy you with its performance compared with your previous one. Feel free to contact us directly if you have any questions about our products. We will assure that our customer always gets high-quality goods and excellent customer service from us. If you need further assistance you may contact us below. Technical support email: techsupport@teamgroup.com.tw RMA email: rma.usa@teamgroup.com.tw   TEAMGROUP
Jeremy H.
Ownership: 1 week to 1 month
Verified Owner
Not bad for the price.5/2/2022 12:24:14 AM

Pros: Got it for a good price on sale. Faster than the other nvme ssd I have installed..

Overall Review: Seems otherwise fine, looks good. For the price point it's worth it.

Manufacturer Response:
Hi Jeremy, Thank you for your review! We understand that you are having concerns with TEAMGROUP T-FORCE CARDEA ZERO Z330 M.2 SSD. We are more than willing to assist you. When the computer is under a heavy workload and more data is stored on SSD, during the process, the computer may take more time to perform tasks such as multitasking or data transfer/management, which will temporarily affect the SSD speed. The SSD is running in the background (e.g. Garbage collection, wear leveling, Read retry), therefore, it is normal for the SSD to sometimes slow down temporarily during the reading and writing process. We will assure that our customer always gets high-quality goods and excellent customer service from us. If you have other concerns, feel free to let us know. For Tech Support visit our TEAMGROUP Online Service https://www.teamgroupinc.com/en/support/ or please email techsupport@teamgroup.com.tw. For Warranty page information: https://www.teamgroupinc.com/en/support/warranty.php For return, repair, or warranty concerns, please visit our online application page https://www.teamgroupinc.com/en/support/service.php TEAMGROUP