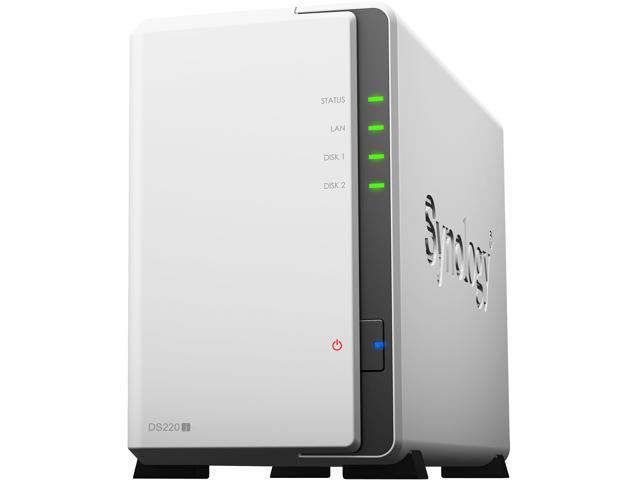 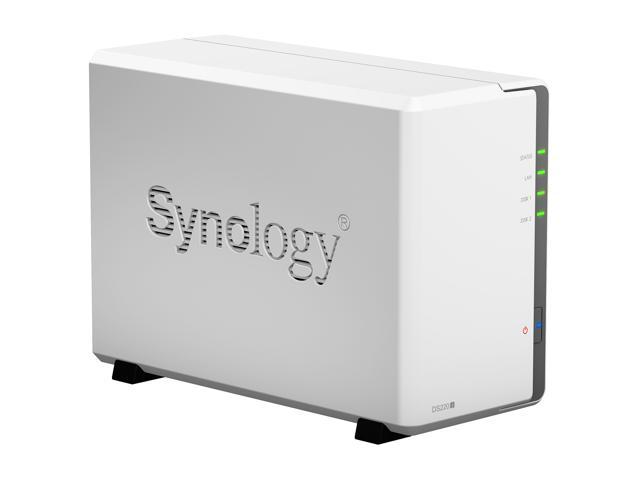 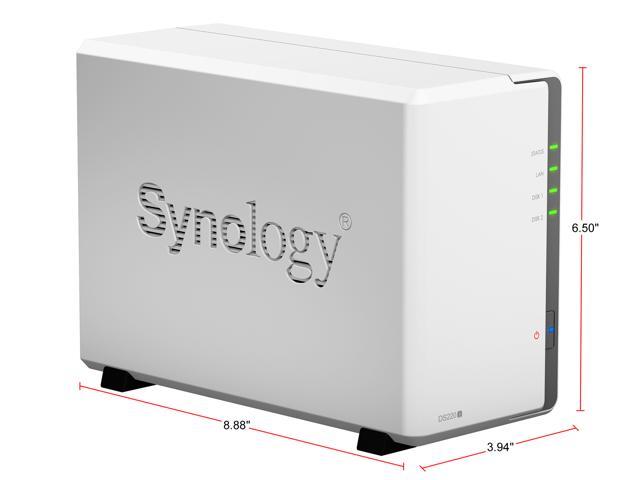 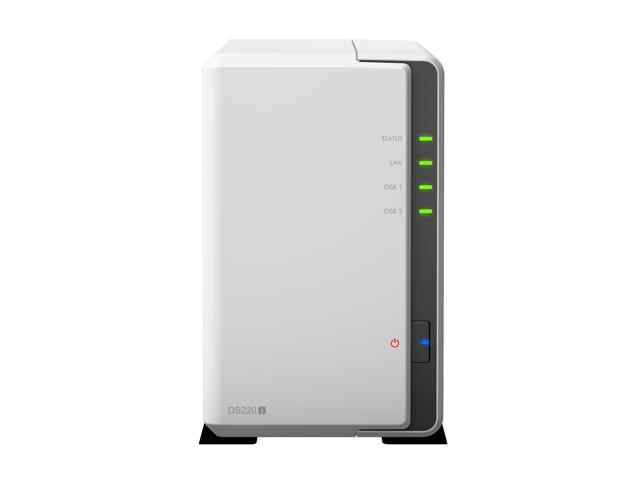 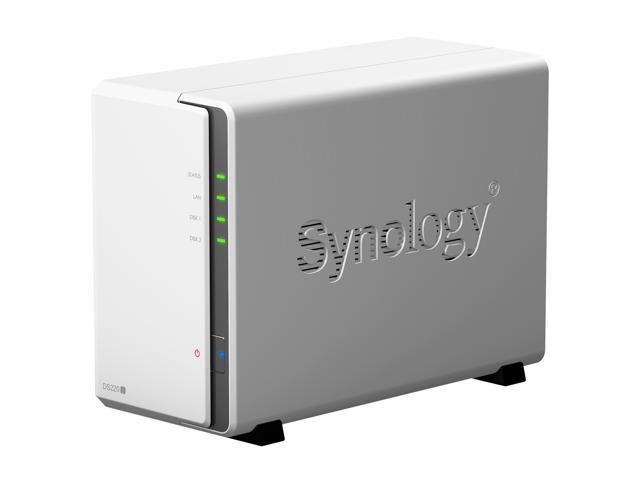 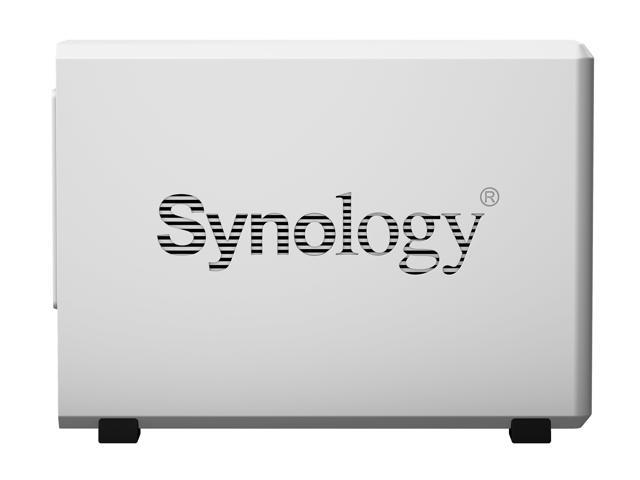 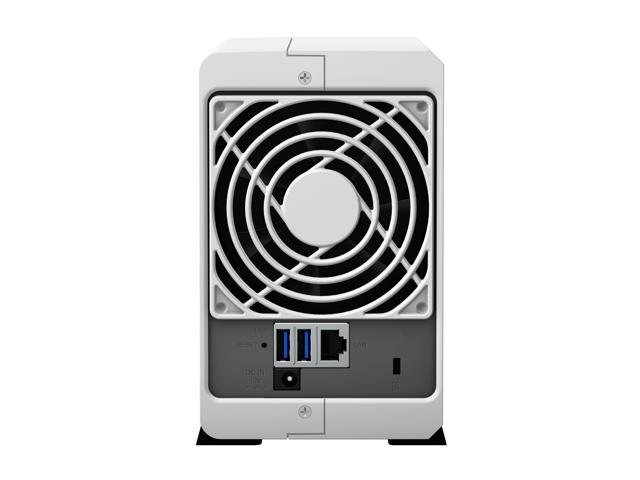 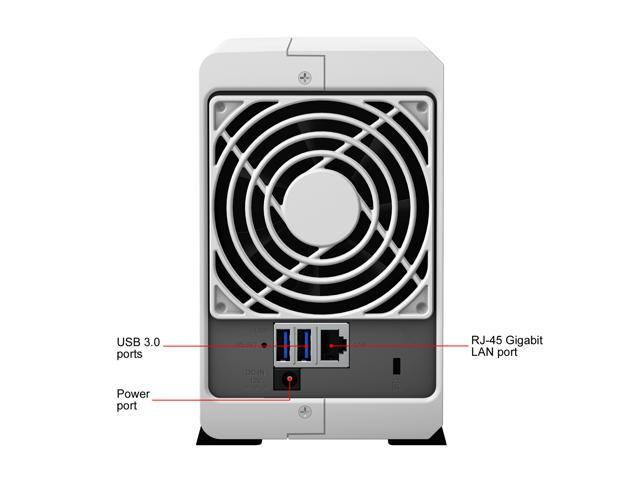 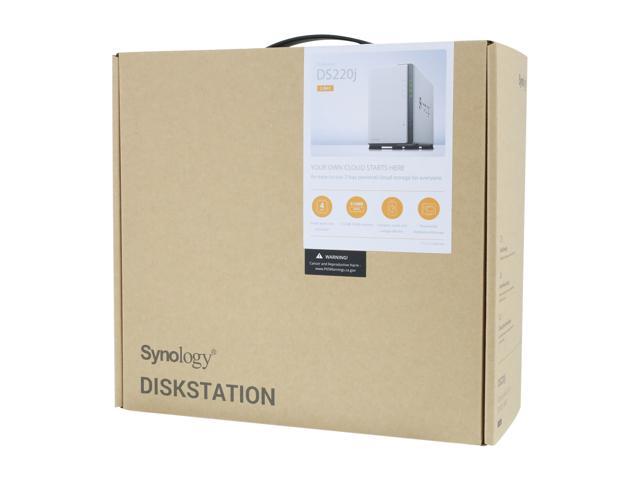 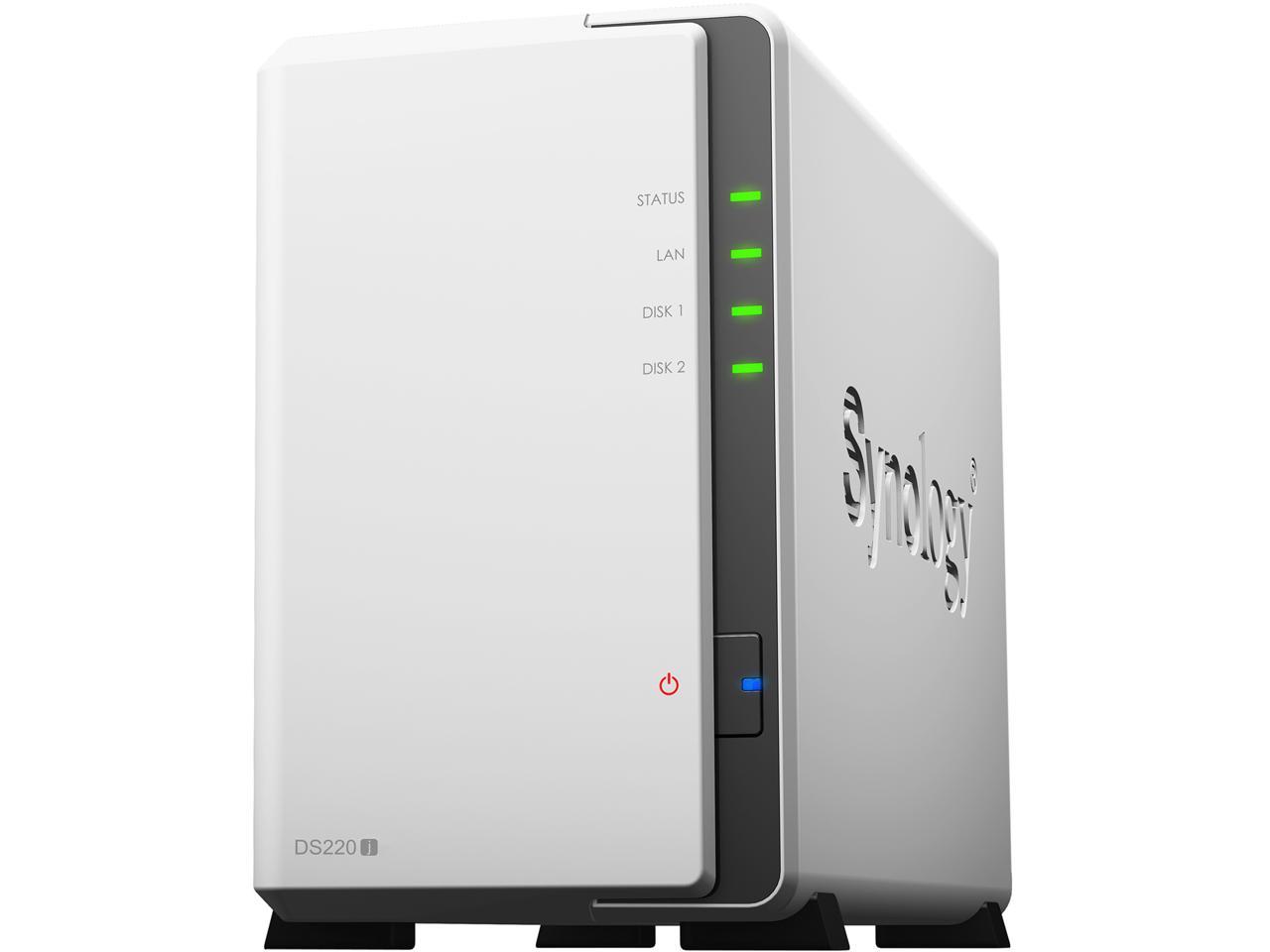 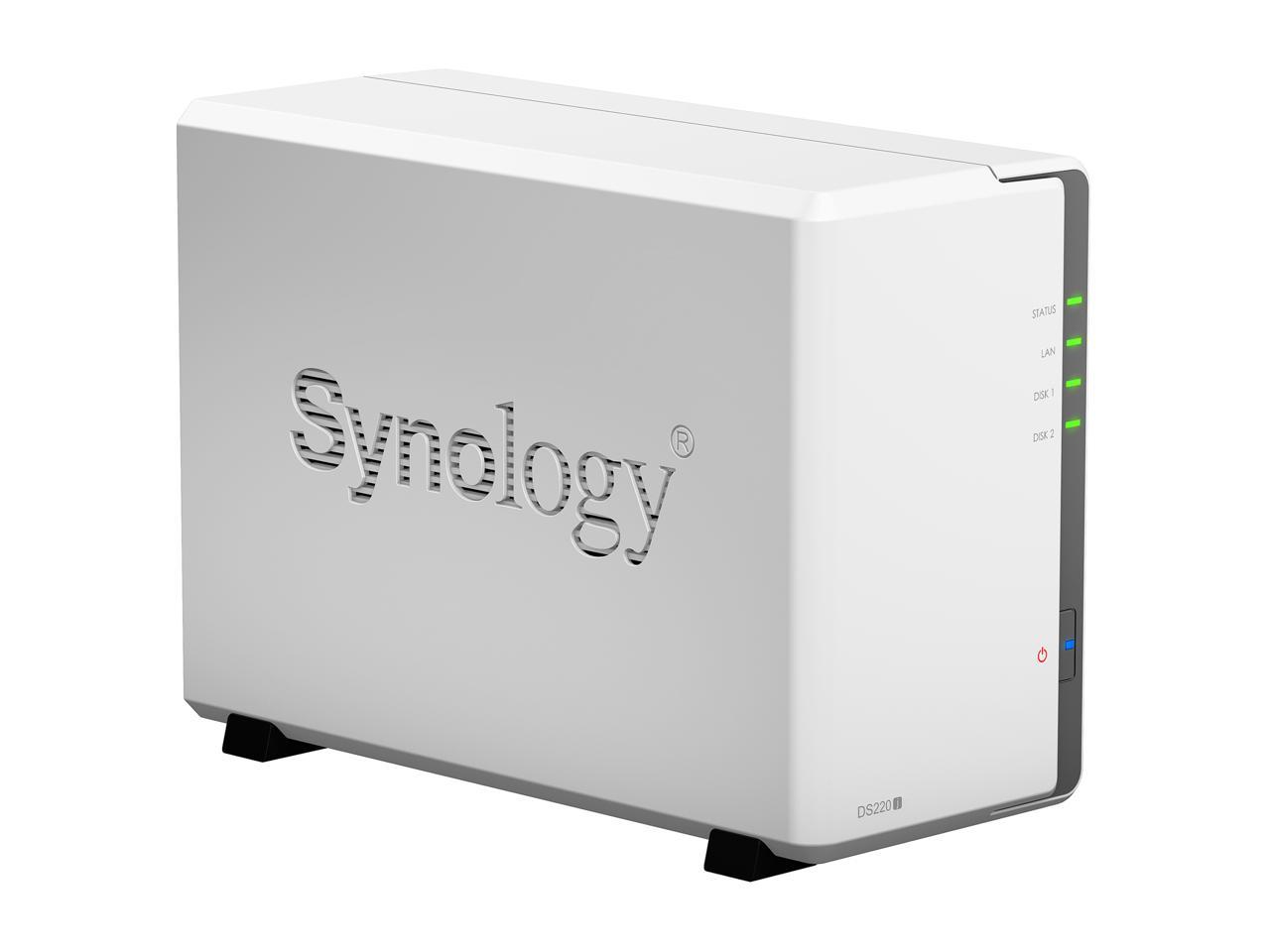 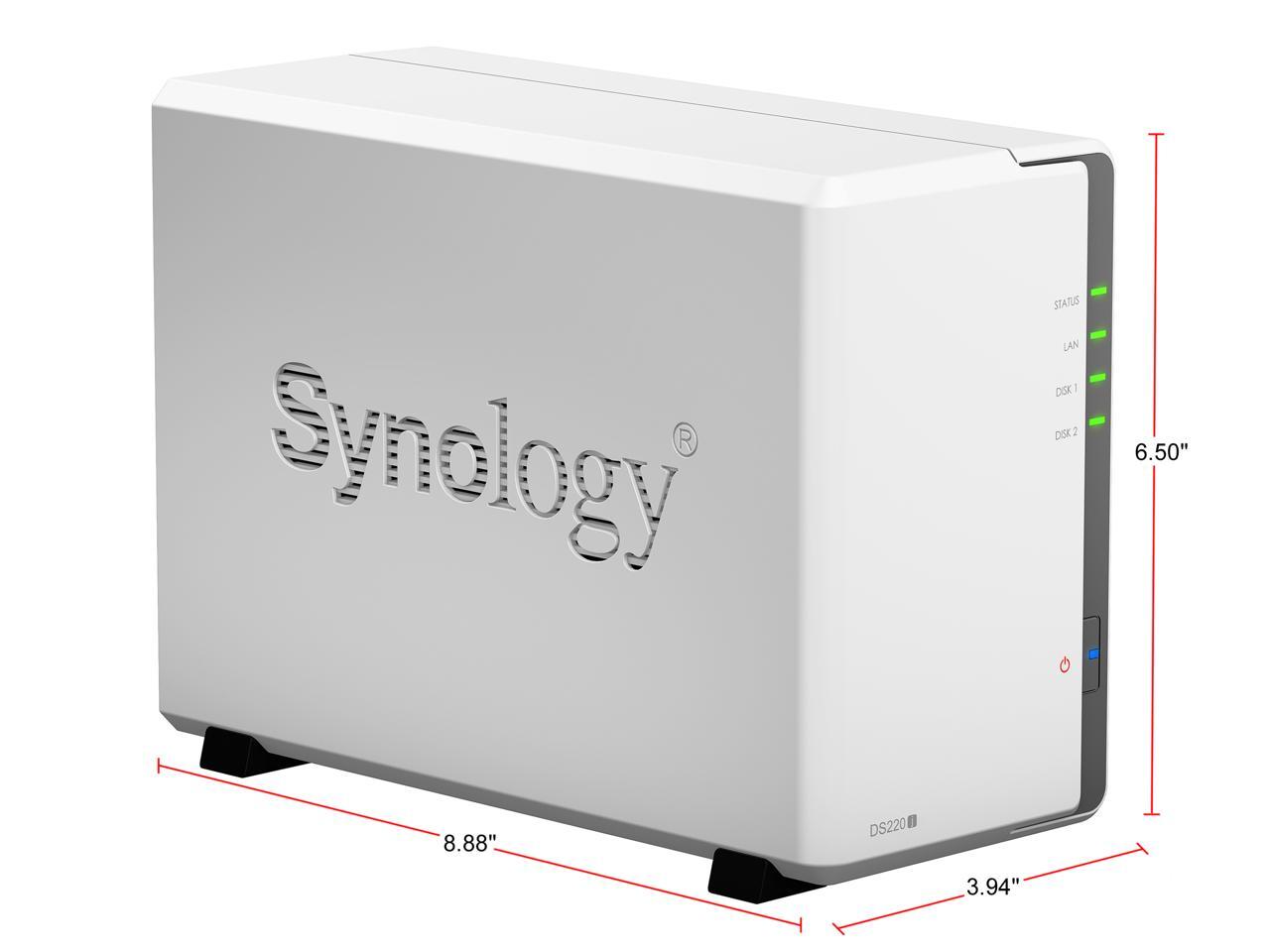 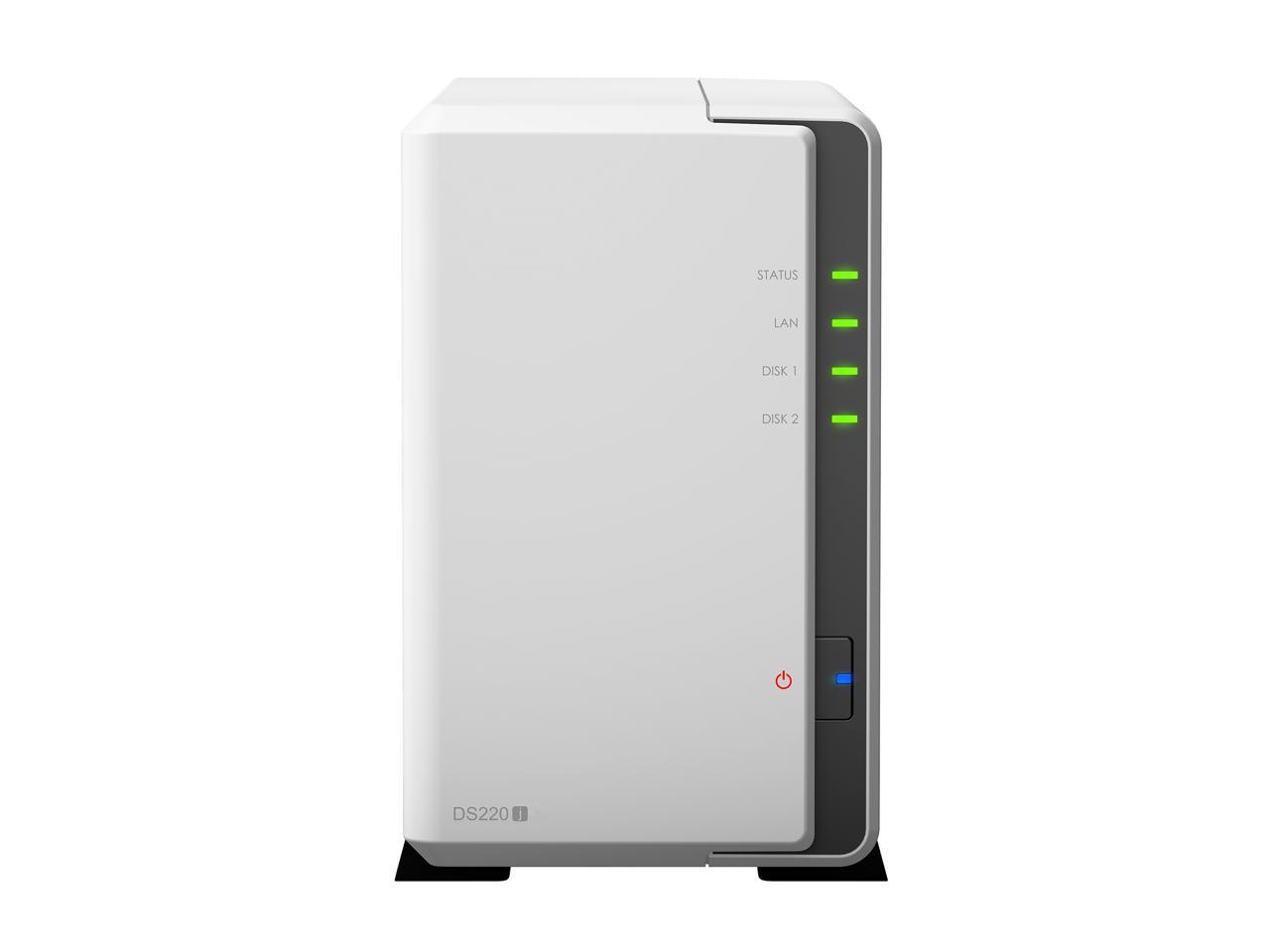 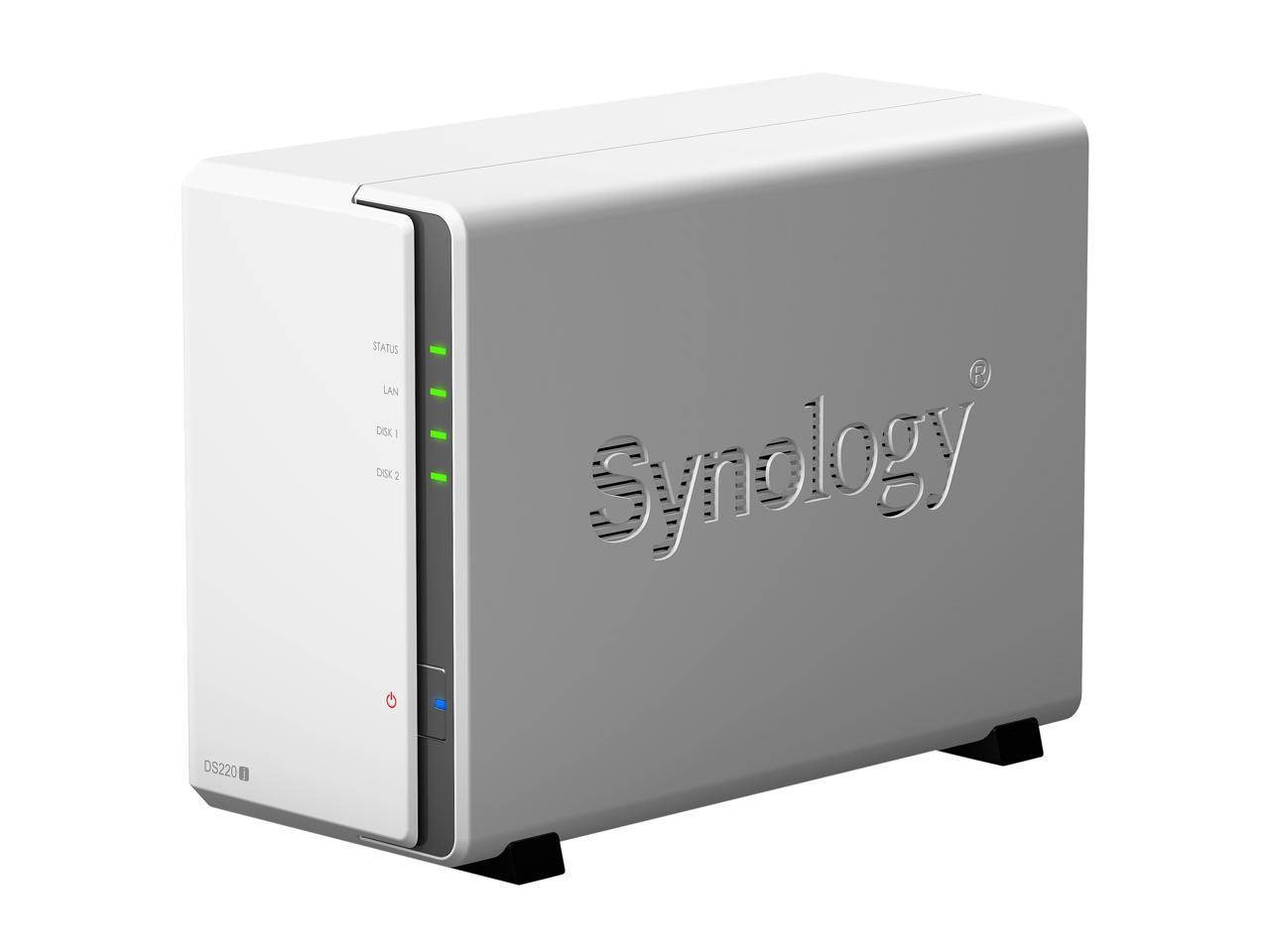 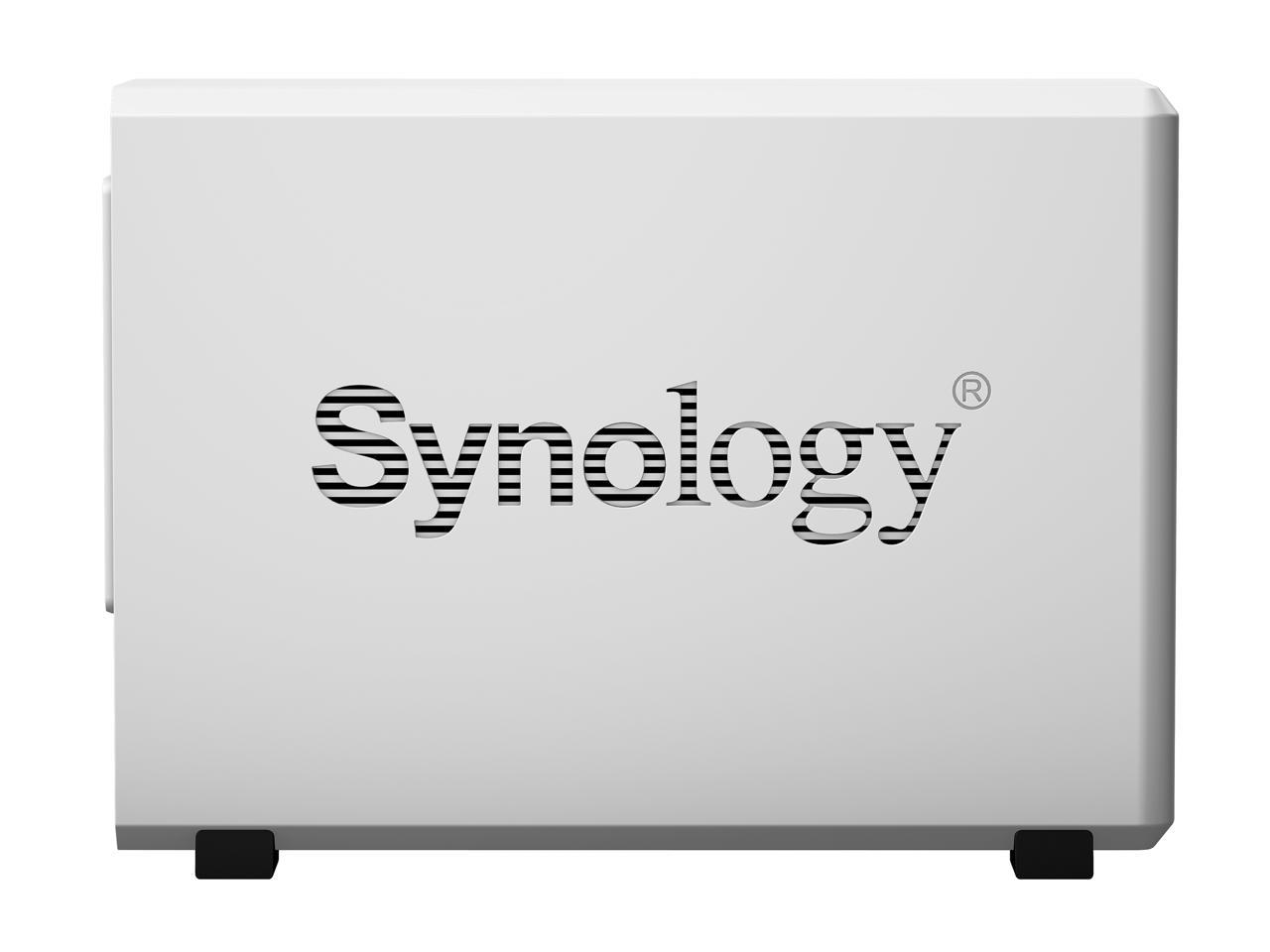 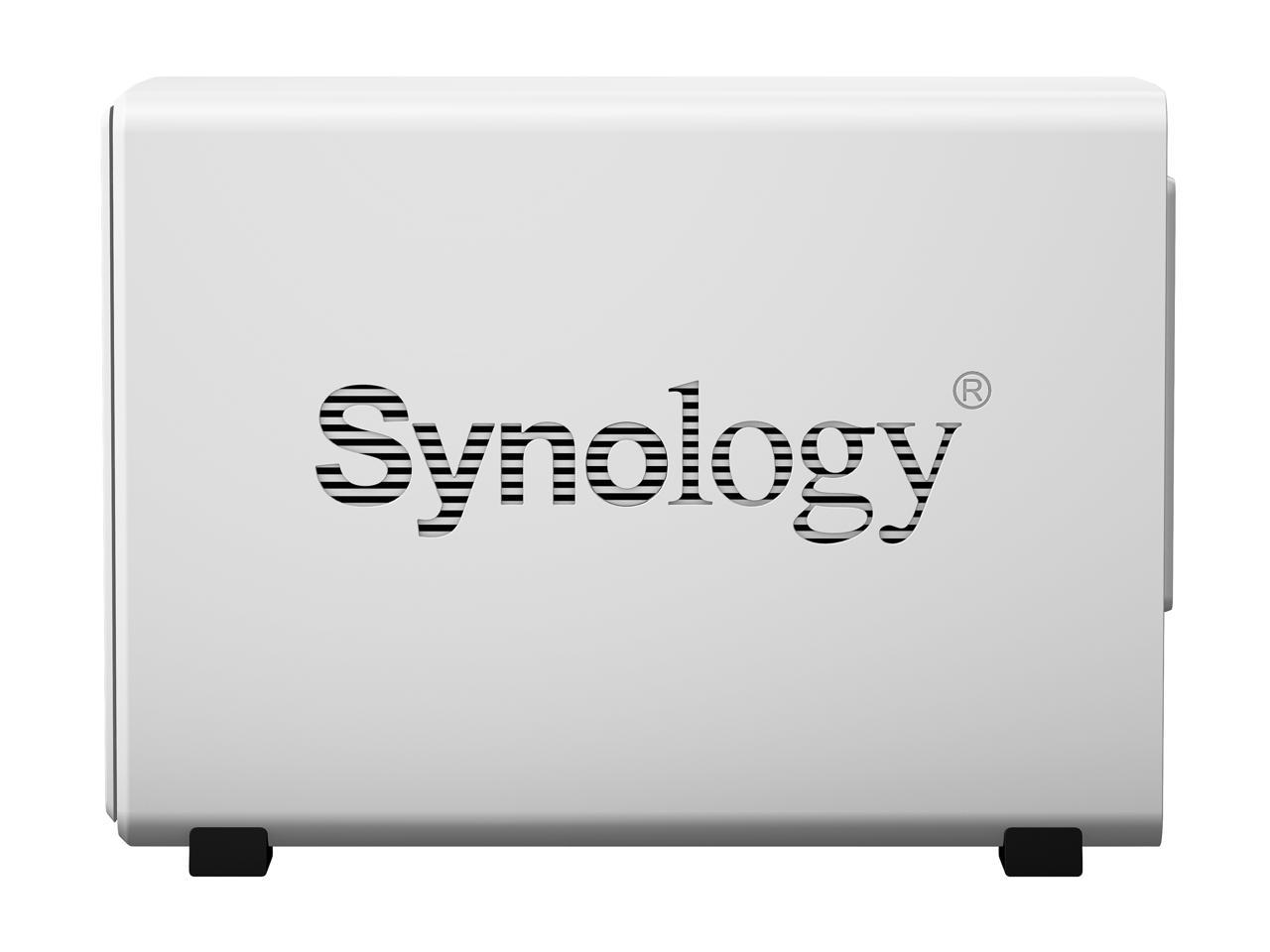 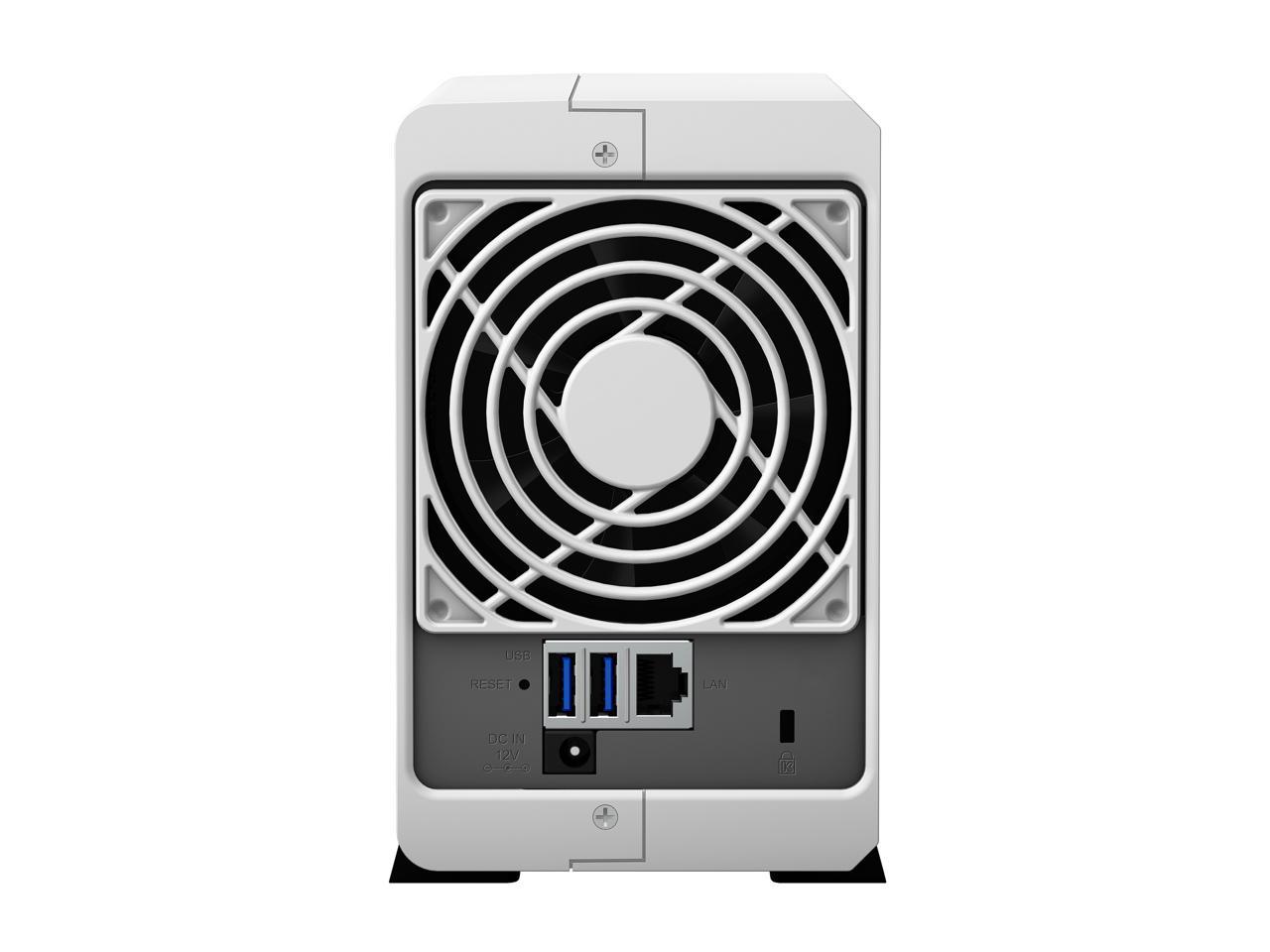 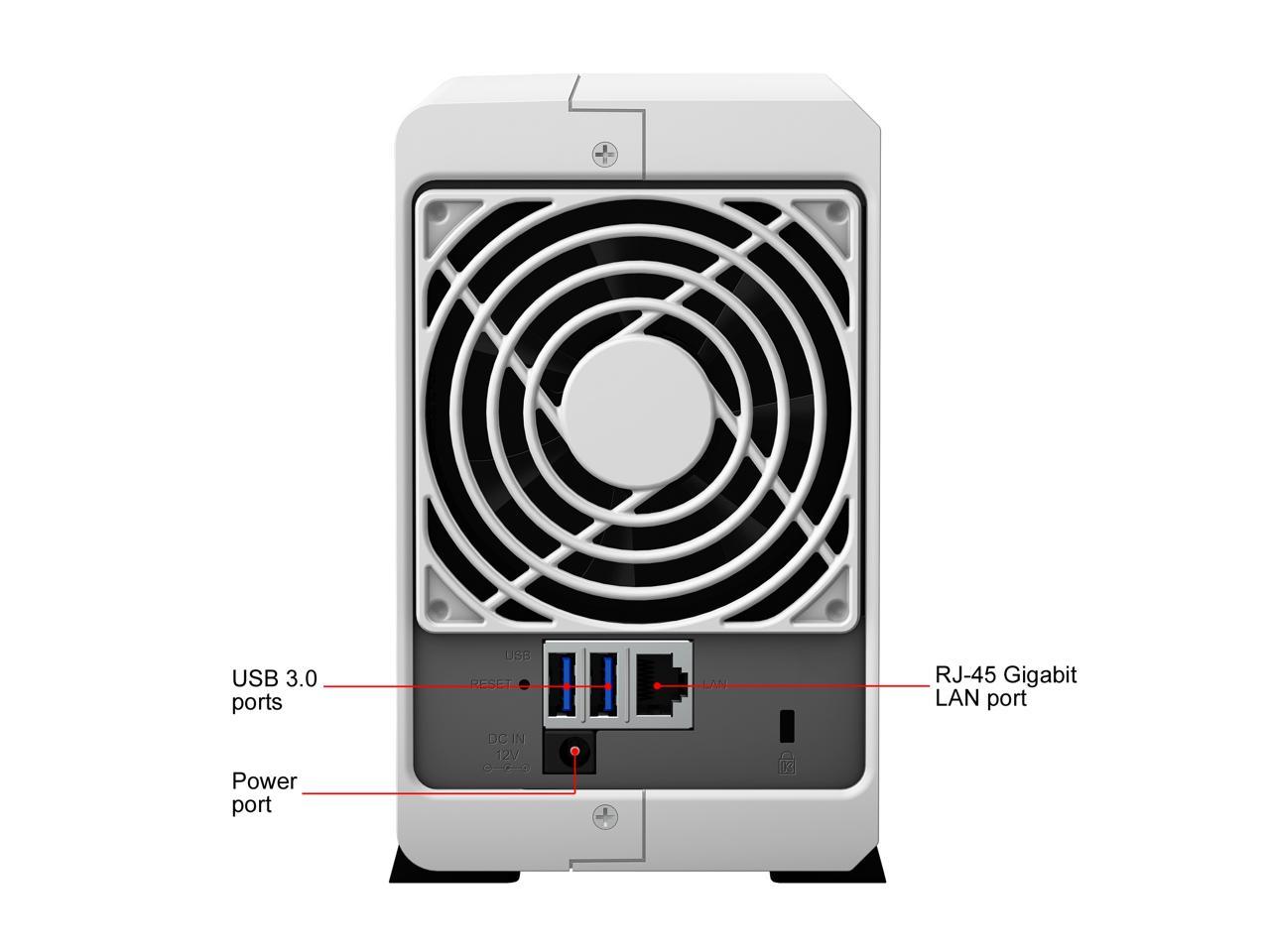 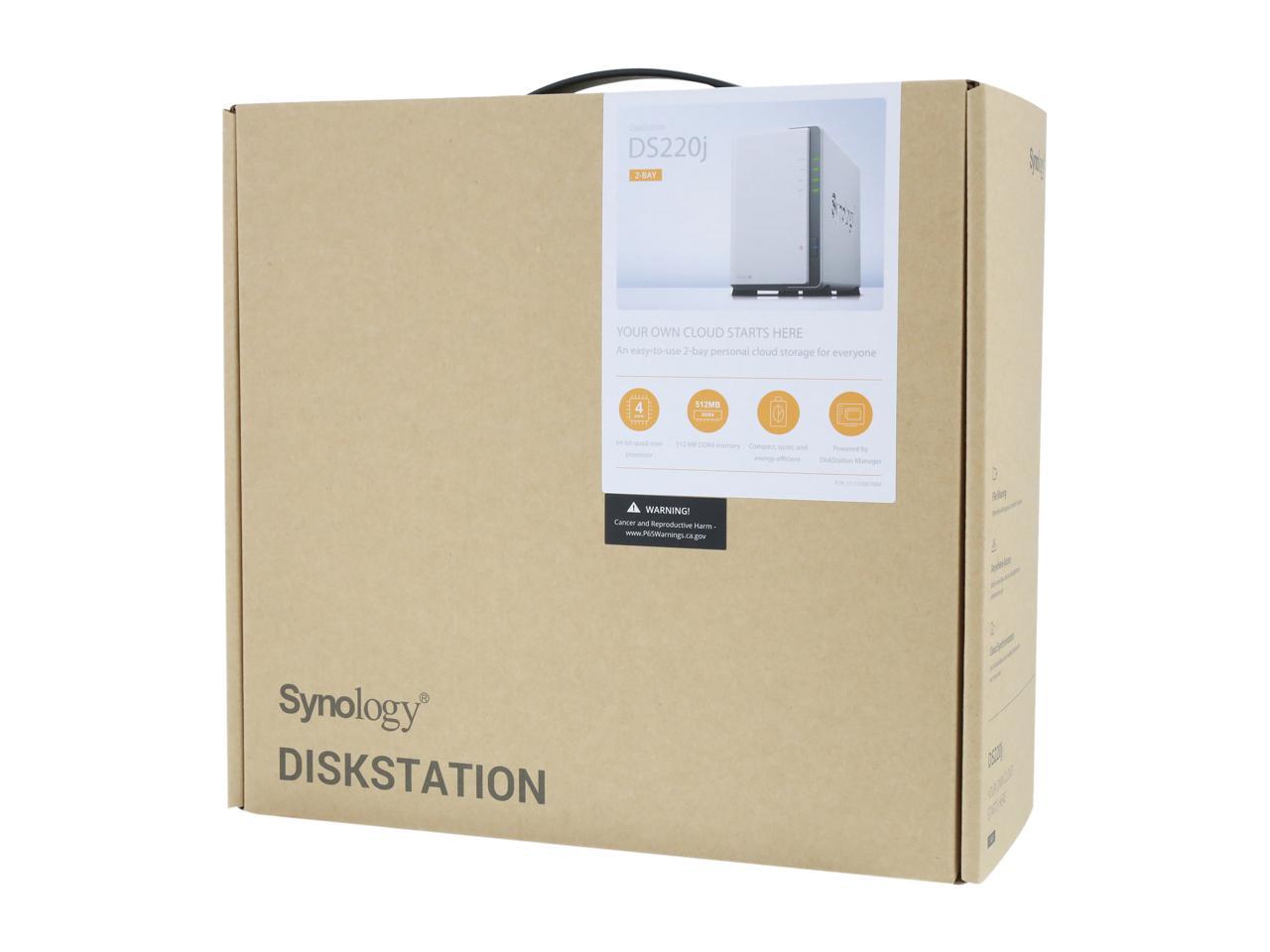 An easy-to-use private cloud for everyone

The DS220j is a 2-bay diskless NAS designed for home and personal users to store and share photos, videos, and documents. It's powered by quad-core processor and running the award-winning DiskStation Manager (DSM) OS, providing an intuitive user interface and safe data protection approaches for easy digital asset backups from computers and mobile devices at no additional cost. And an integrated media server lets you easily stream multimedia content to your PC, TV and mobile device.

More than 112 MB/s reading and writing*

* Performance figures may vary depending on environment, usage, and configuration. Storage management is easy with Synology Hybrid RAID (SHR) technology. SHR is an automated RAID management system that allows you to easily create and expand storage volumes and migrate RAID types without requiring details on the RAID setup. SHR provides 1-disk redundancy to safeguard your data in case of drive failures.

SHR maximizes the data capacity of your RAID when different size HDDs are used.

For new users with limited technical knowledge who want to protect their data using RAID technology, a convenient installation wizard will guide you through all the steps during your first installation.

Add new disks on the fly in Storage Manager with a simple click.

While creating a volume, choose to plan ahead and leave empty or unallocated space for future use.

Seamless integration with your mobile devices

Synology mobile applications are designed to give you quick and secure access to your data wherever you are. Cons: -Has a "quick install guide" but shows nothing on which screws are meant for the drives versus enclosure -CPU has no backbone so if you're setting up a media server, it will not be able to transcode videos without help

Overall Review: I bought this as my first NAS, largely to serve as a Plex server but also to use as a centralized network storage for all devices on my network. Starting from the unboxing, it was packaged very well however you only get a quick install guide which shows you how to open, install the drives and how to plug it in. No specifics on what screws to use and where (3 different types with more than you need), so that was trial and error on my part. Once physically set up, installing DSM (Disk Station Manager) and any extras, such as Plex, was very easy. I plugged in my external HDD directly to the NAS and copied over all of my media and files. Since then, I've been having trouble with the server transcoding videos when I play them. I've realized that if you're client-side device does not have a CPU powerful enough, it will solely rely on the NAS to do all of the transcoding. So devices such as Roku just will throw a message saying the NAS CPU isn't powerful enough to play the video. If I use devices such as a computer, tablet, phone or Xbox, it plays just fine with no issues and no considerable increase in NAS CPU usage (was hovering around 20%). The bottom line here is that this NAS will serve it's purpose and may serve you well BUT that depends on your intended use, and for me that means I'll have to tell my friends who I've shared my Plex server with that they have to use devices that have some "power" in them.

Pros: Easy to assemble (As long as you use 3.5" drives; 2.5' drives require adapters (not included) my 2 - WD Red WD40EFAX 4TB 5400 RPM 256MB Cache SATA 6.0Gb/s 3.5" Internal Hard Drive fit inside perfectly Speeds copying old backups to NAS (Macriumn Reflect format) sustained 107MB/s writes, which surprised me given that these are 5400 RPM drives Default is mirrored, which works out fine for me - Extremely simple to configure, was up in way less than an hour, including assembly time

Cons: I haven't found any cons yet, it is working as intended

Overall Review: I am writing this review after using it about 2+ weeks or so now. I am thinking I should have bought this a LONG time ago, instead of waiting until now

Cons: - The setup can be tricky if you try and do it without reading/watching a tutorial

Overall Review: I would totally recommend this NAS to anyone who wants a simple and clean NAS. I think any household could benefit from such an item. Whether its for editing, photo sharing, movies, it works great for anything.

Overall Review: I had been using a Synology DS211j since 2011, and it had no problems. However, as the Disk Station Manager software improved and took on more functions, the single core processor in the DS211j just could not keep up, and it took a long time to do almost anything. I upgraded to the DS220j based on its specs: a quad core processor with twice the memory, plus the HDD's could be migrated over to the DS220j. Everything has been great: I do not find myself waiting for the NAS to come ready, especially if the HDD's have gone into deep hibernation. I can also use the Synology Drive package in the background without any noticeable drop in performance. Overall I am very pleased with the upgrade and would definitely recommend this product.

Pros: PROS: Excellent for cloud storage of all my personal and office documents and photos.

Overall Review: Excellent alternative to have a personal cloud service. Unlimited and eventually free since only has to spend a few dollars to buy it.

Overall Review: I just put 2x 1TB used desktop grade HDDs to start with, and have it running for a month now. I use it to download and host movies (simple share, no decoding), and do basic PC and MAC file sharing and timemachine for MAC. The file transfer rate was originally measured from PC to the mapped network drive at 20-30 MB/s, which is a bit low. For some unknown reason (I'm a newbie to NAS ) it increased to 100MB/s on both read and write one day - maybe you just need to let it run for a week or so :)

Pros: Been using a single drive unit from Synology for about 5 years. Some of the data I want to keep for ever, but had to back it up since it did not have multiple drive capabilities to run Raid 1. This unit holds 2 drives and has the ability to run a modified RAID 1 so the drives do not need to be the same size.

Cons: None that I know of

Overall Review: Its been in operation about 4 months with no issues. Synology always has made great products. I now have some insurance for a single disk failure.

Pros: - Great value for your money - Awesome entry-level NAS solution - Simple hard drive installation - Easy and intuitive setup with a web interface for the OS - A breeze to mount volumes on your computer's OS (I use macOS) in different ways

Cons: - Annoying startup beep sound - A bit noisy - Not very performant, but sufficiently performant for its price tag and for general backup tasks

Overall Review: I'm a software engineer and a hobbyist photographer. The former made me feel like I need to buy something more serious and set up NFS on a home server myself. The latter just means I needed a quick storage solution with minimal effort for my Mac, so I can store raw and edited photos on an external solution. The latter won, it was a no-brainer. Maybe my next purchase would be a stronger device when I'll run out of space and will need more disk bays, but to be honest, the fact that Synology's setup is such an intuitive process will probably support my decision to stick to Synology when I upgrade.