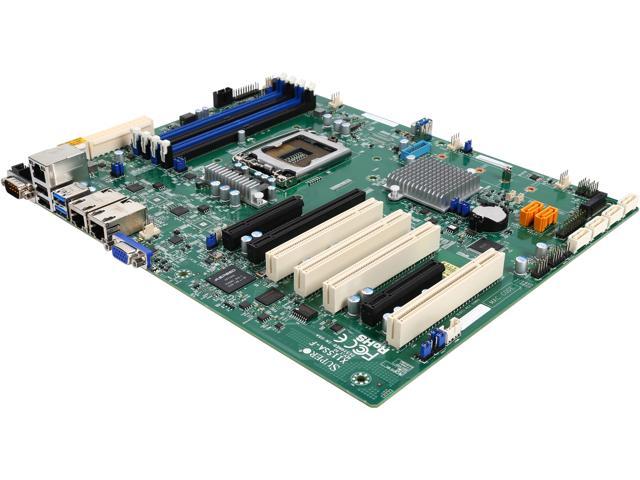 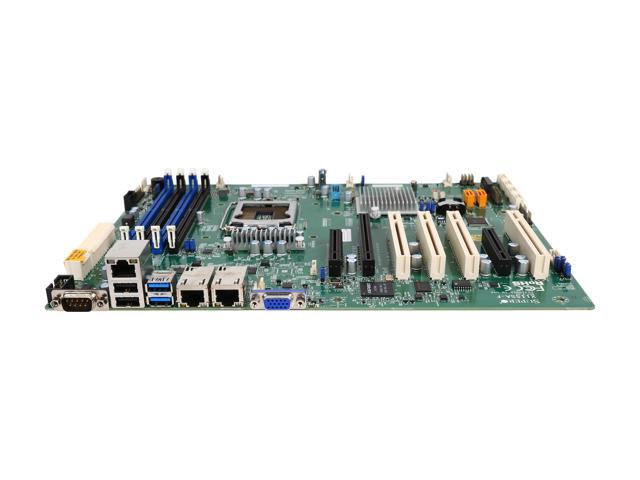 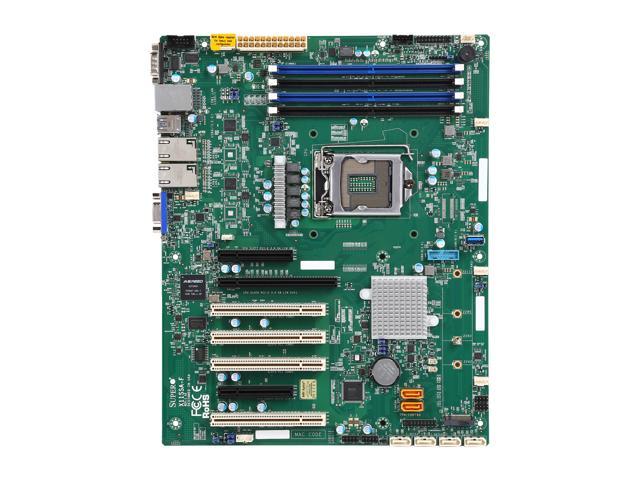 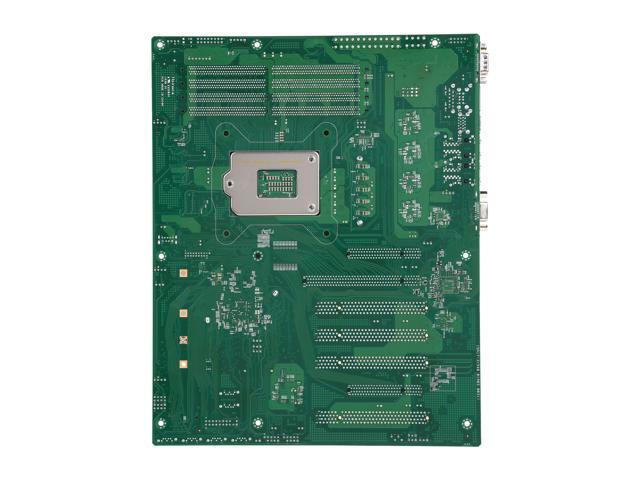 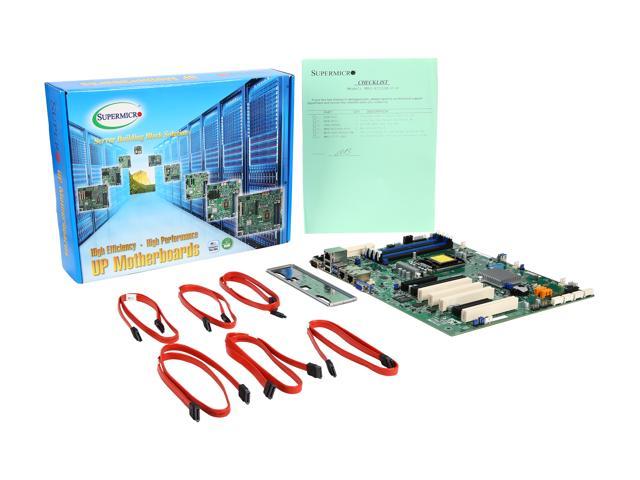 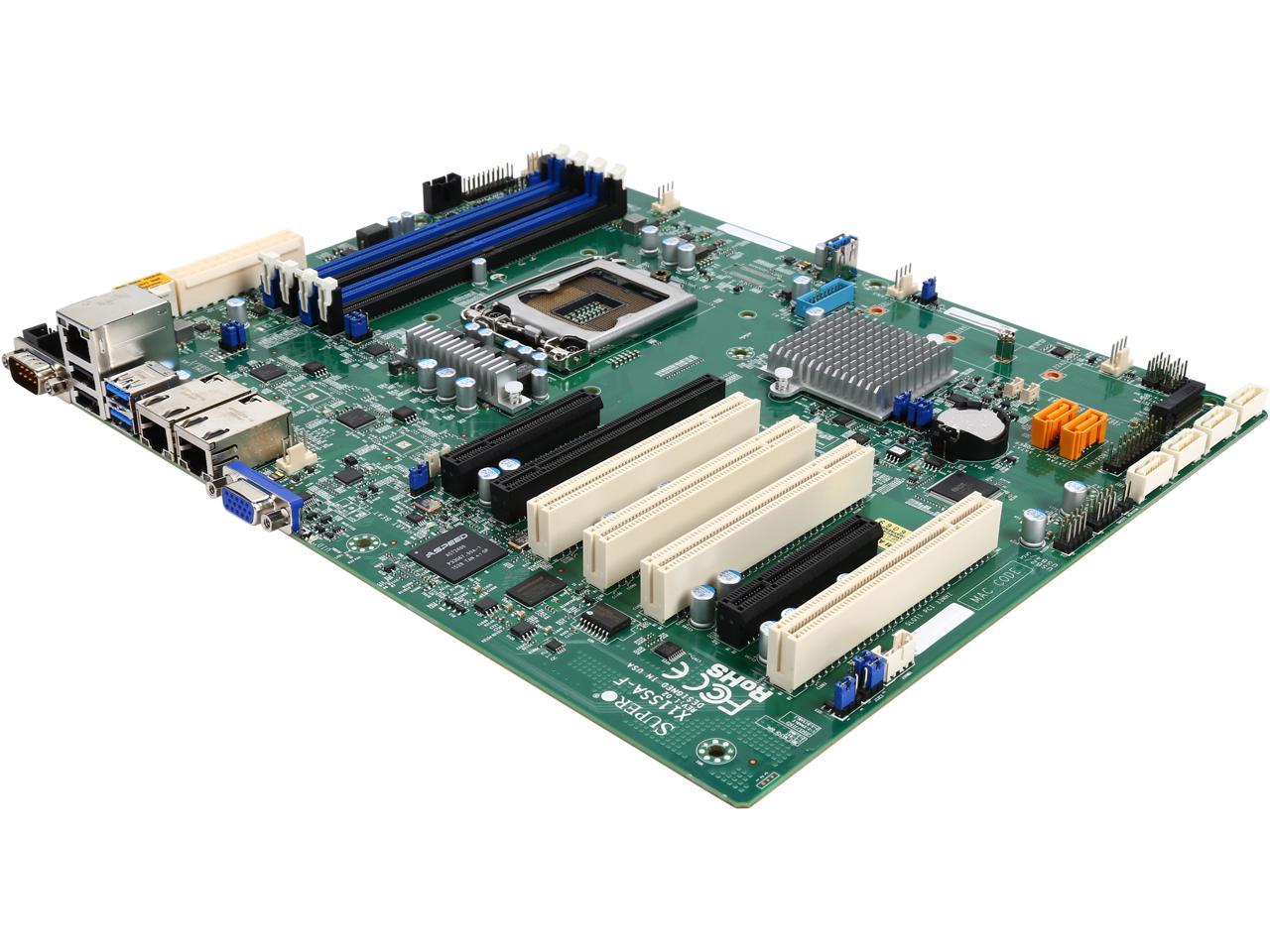 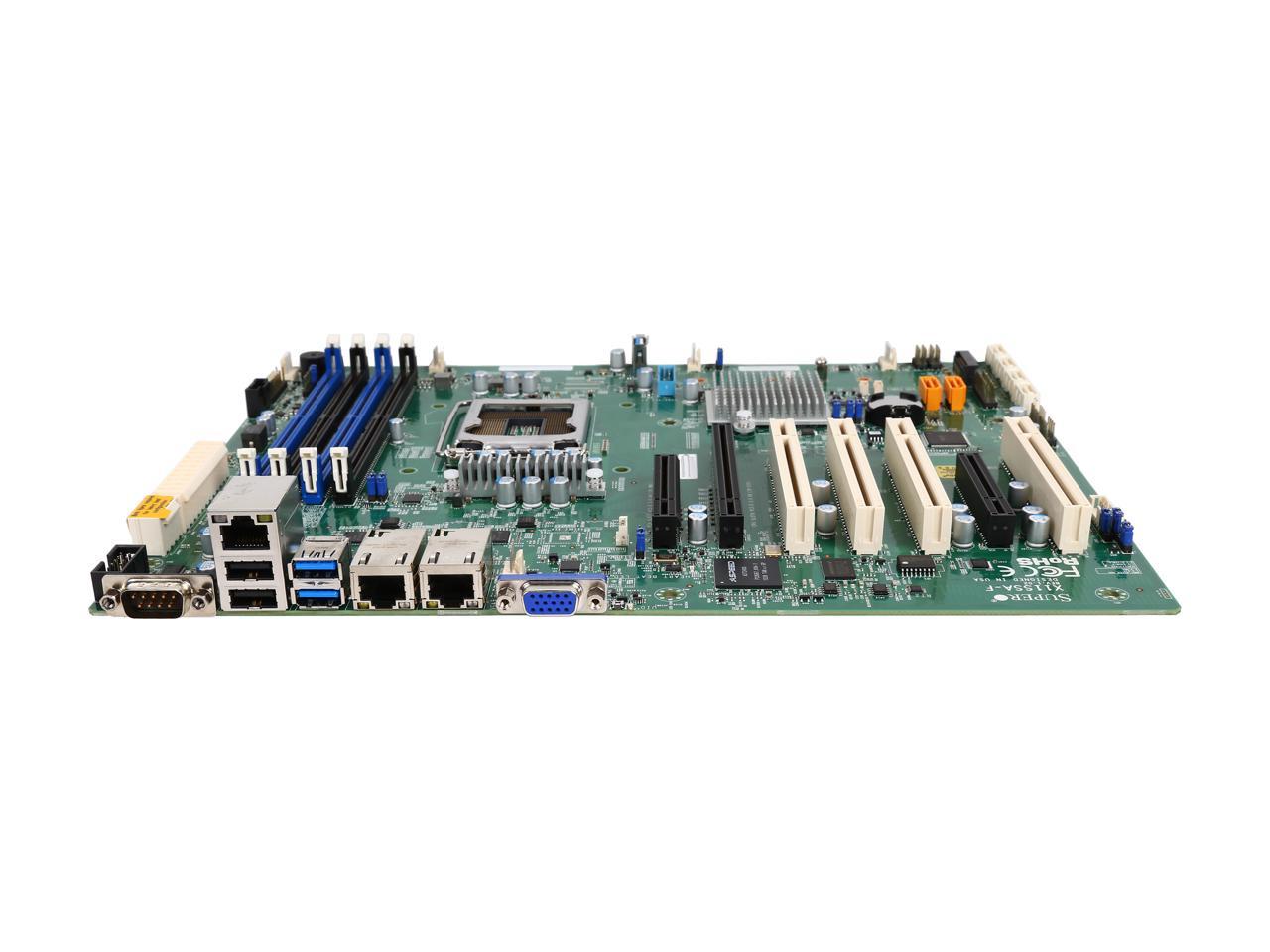 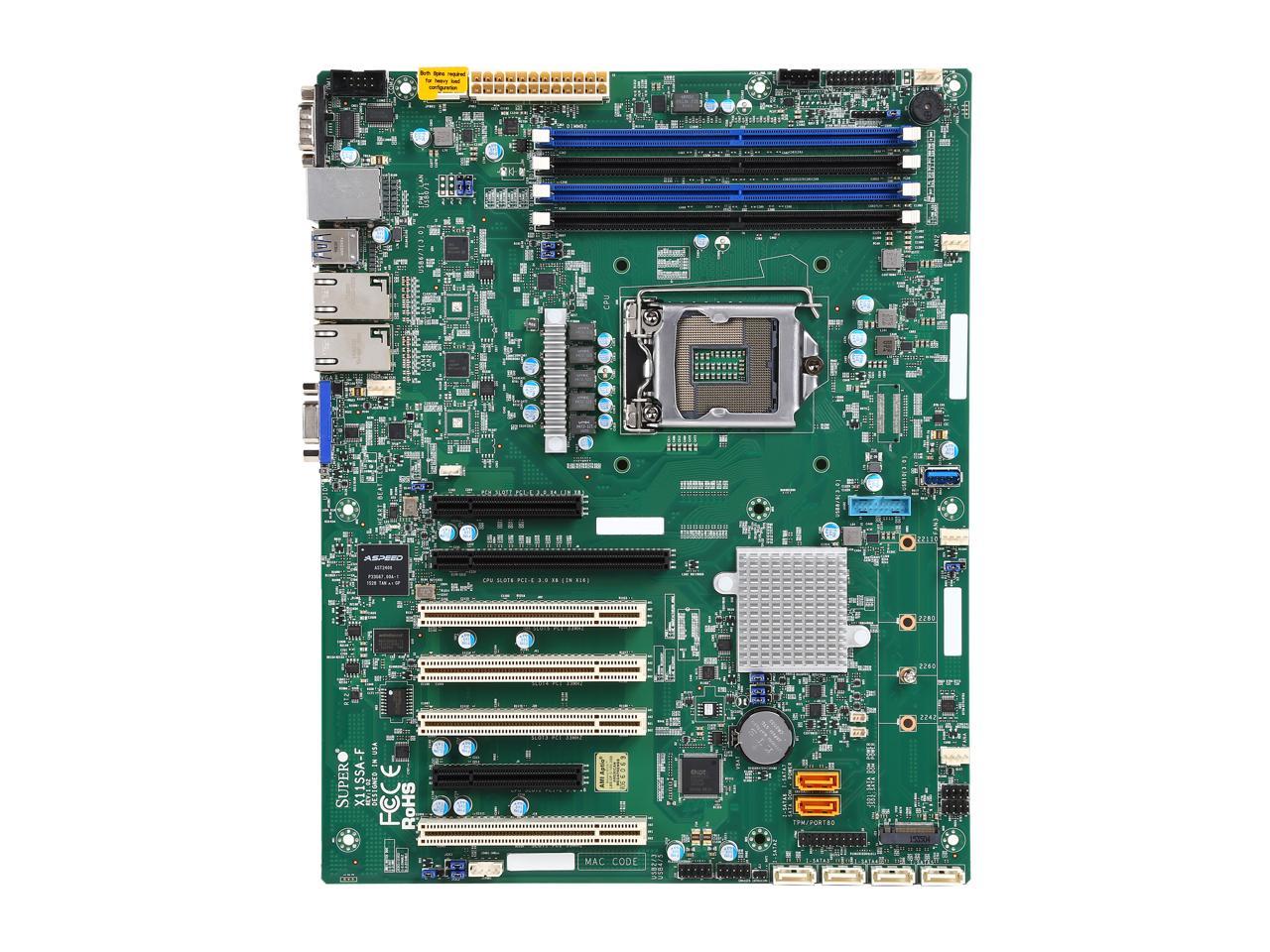 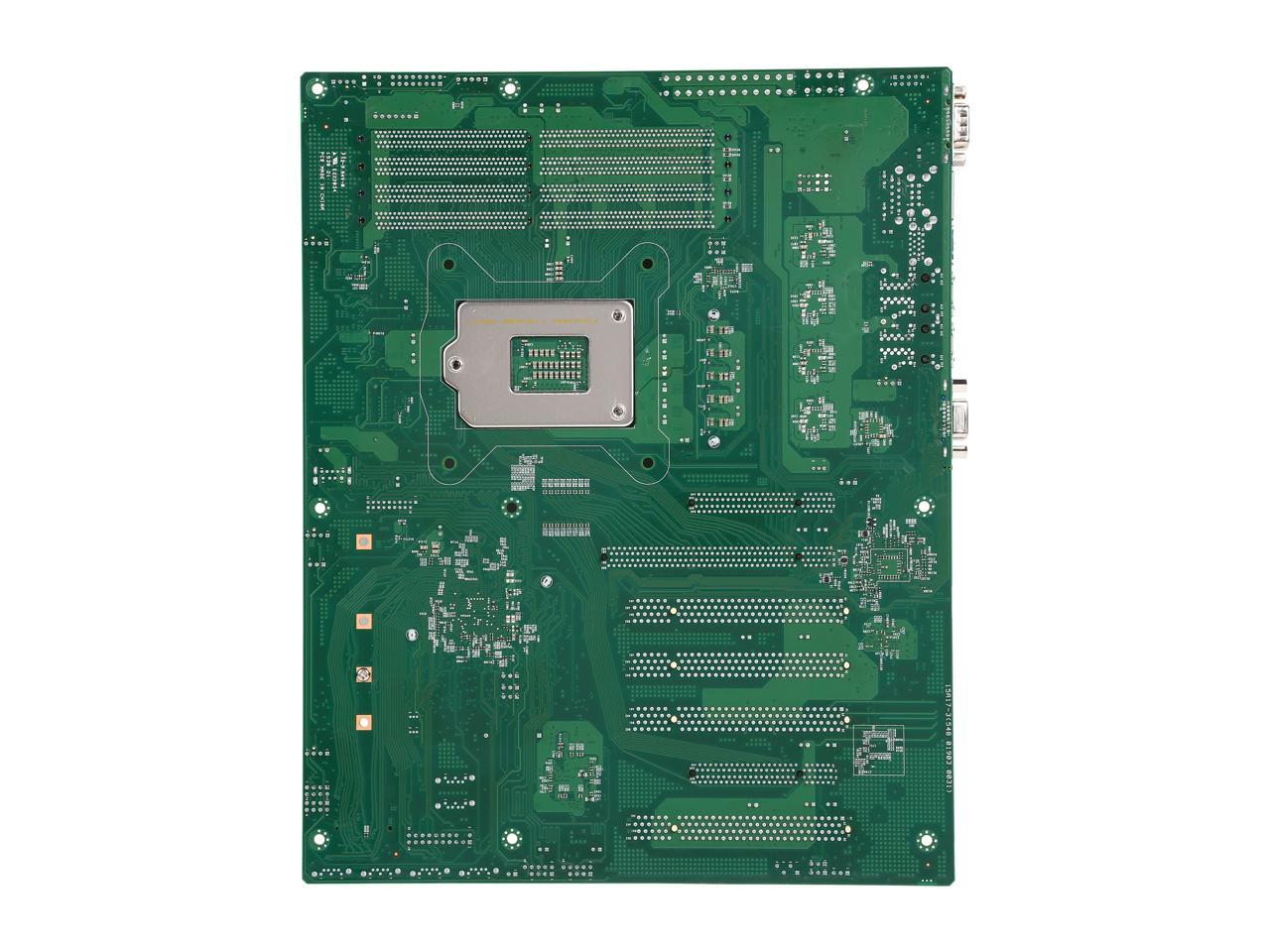 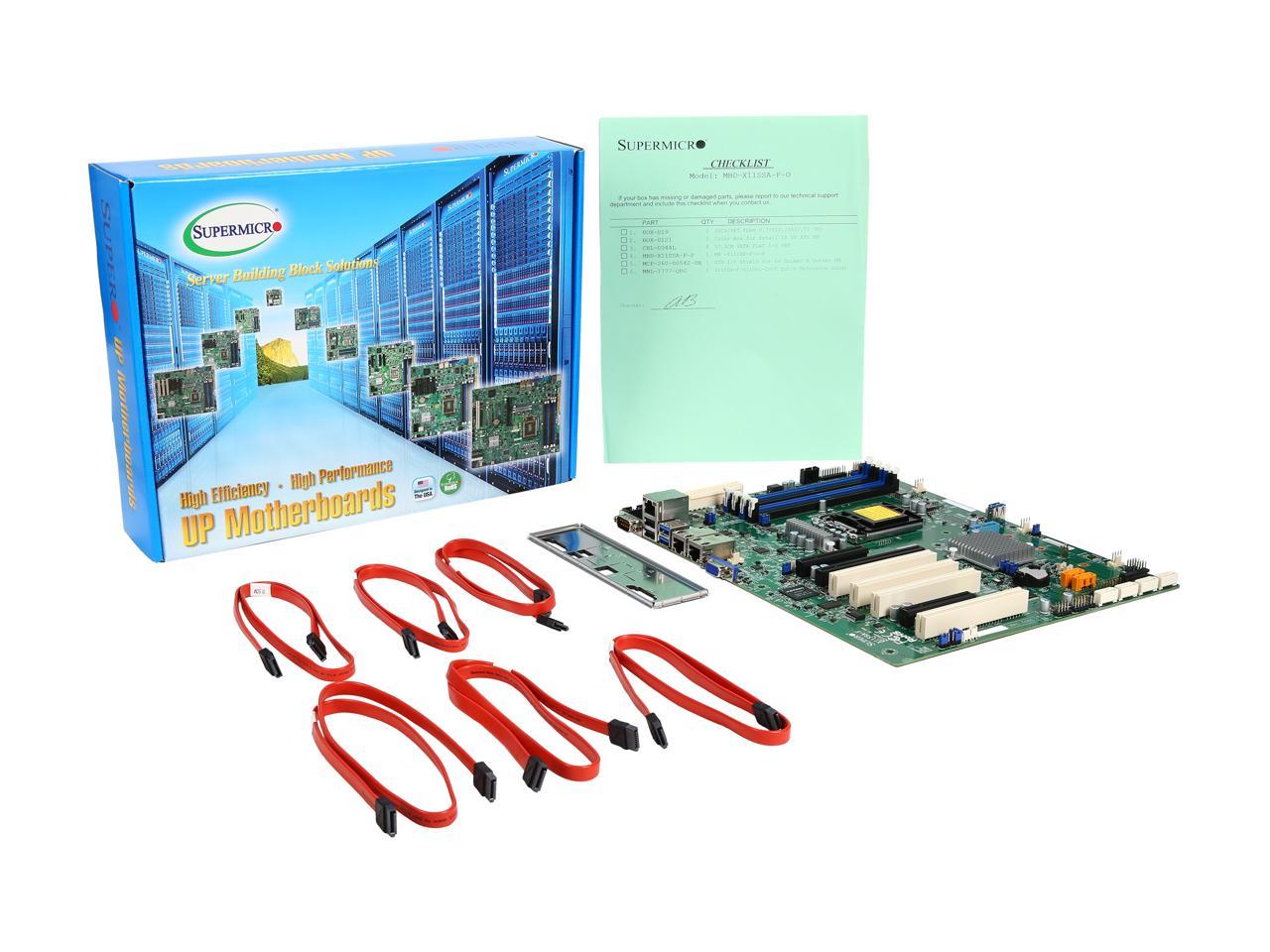 Whats in the Box Learn more about the Supermicro MBD-X11SSA-F-O

Pros: Board has everything I wanted for my server. IPMI (Which was easy to setup) TPM header M.2 (more on that later) DDR4 memory Several 4 pin fan headers (more on that later) 2 Lan Ports Works well with the xeon I purchased from a different retailer... cough cheaper...

Cons: Now how could this be improved. First and foremost: M.2 - Cannot be booted from easily with this motherboard and with the latest bios. The only way to get it to boot with the latest bios is to set boot options to UEFI only and get UEFI boot block installed on the device. The other option is to get the 1.0 bios from supermicro. Somewhat disappointed in this as this was my first foray into M.2 and was excited to use the samsung 960 pro in it. Was a pain to find an answer to this question. I believe I will take the M.2 out of it and put it in my desktop and replace the M.2 in my server with the SATA SSD drive from my desktop. Have not done this yet, as it is a pain. Second Fans - The fans meant for this board are not consumer aftermarket fans (which I understand, it is a server board). The issue is the consumer aftermarket fans (I used noctua fans for CPU heatsink and case) spin much more slowly than their server counterparts albeit much more quietly (thank you Noctua). The bios on the motherboard has a minimum cutoff for the fans RPM at which point it will believe the fans have failed and will rev up the fans to max until it becomes higher than the low cutoff and then shutoff again. This cycles every 5 seconds or so and is extremely annoying (this is going in a bedroom closet, hence the need for quiet). Now to remedy this issue I figured I'd go into the bios and easily change the settings (no such luck). I then discovered using the IPMI utility supermicro offers I can change the fan speed settings. When entering the IPMI there are 4 selections for fan speed settings, none of which will fix this. Now i tried the command line utility SM offers to fix this, but to no use. So the only way is to use a free IPMI utility NOT by SM through command line to fix this issue which was somewhat easy, but very time consuming. Also the directions for the FAN headers are somewhat misleading as they lead you to believe FANA header is for the CPU fan, but it is not.

Overall Review: This was my first server build after building many PCs in the past and was much more time consuming with this board. So would I buy this again if I could go back in time? Probably not given the issues I have above. I was looking at other manufacturers for weeks prior to purchasing this and I would go with a different one now. Am I going to return it? No, it does its job and after trouble shooting is working. Like all things in life, you cant always get what you want, but for the price this could have been easier.

1 out of 1 people found this review helpful. Did you?
Manufacturer Response:
We are sincerely apologize the issue you are experiencing with your motherboard. Please kindly contact our technical support so that we can find out more about your configuration and work with you in finding a solution. Please see the below technical support contact information: Phone: (408)503-8000 Hours: 9:00 a.m – 6:00 p.m. Pacific Time (Monday – Friday) Email address: support@supermicro.com You can also submit your issue online: https://webpr3.supermicro.com/Support/login.aspx? Please do not hesitate to contact us if you have any question. Thank you! SM Technical Support

Cons: No driver CD. Supposedly you can download but... a) very difficult to find inside the web site, b)Very confusing - multiple drivers, no explanation, total chaos.

Pros: Good, no-nonsense board to utilize current E3 Xeon processors with legacy PCI slots if you need them. It has everything you want, uses a reasonable component layout, and just works!

Cons: Not really a "con" per se, but if you're trying to POST the board using the onboard video ... make sure the CPU you've installed supports it. I had a couple of my guys swear that these were DOA when they tried simply dropping an E3-1275 in the socket and booting with the onboard video. Since we build CAD workstations, it was an odd occurrence. Disabling the onboard video (which is our standard MO) and testing with an installed video card worked perfectly (as expected). This board takes longer to POST than most. Not a big deal for server or CAD workstation use (since the machines tend to stay on 24/7) but something to be aware of, nonetheless. Installing Windows 7 on this board is an adventure, to say the least. If you know that is your intention from the outset, I'd look elsewhere. (See Below)

Overall Review: We've been using these to build Windows 10 based CAD workstations ... and they've been terrific for that purpose. I honestly don't believe I could have made a better choice. Recently, we had a client request a downgrade to Windows 7 ... due to a single legacy software product that controls some shop machinery (so it HAS to work) for which the manufacturer has no plans to support Windows 10. So I took the machine back to the shop, dropped in a Windows 7 disk, got no mouse or keyboard on the screen, and realized that I was in Skylake/Windows 7 H*ll. (Which I'd read about, but avoided up until this point.) This is no fault of SuperMicro, but Microsoft/Intel have conspired to remove EHCI support (which makes USB 2.0 ports function natively in Windows 7) from Skylake and all future platforms. There are three ways to deal with this, and to their credit, the SuperMicro website mentions this. 1) Use PS/2 keyboards and mice to install Windows 7. 2) Use a special BIOS option to enable USB keyboard and mouse support in Windows 7 or 3) Prepare a custom Windows 7 installation image that injects the necessary drivers at boot time and also during the install. Well this board has no PS/2 ports, so #1 was out. There IS a BIOS option, but I could not get it to work for me. I tried for quite some time, but finally punted on #2. That led me to #3, which was probably the "right" thing to do all along, since we're system builders and likely to encounter this on the odd user who insists on Windows 7 down the line. I won't detail the process, you can Google it. But basically, it involves using the WAIK tools from Microsoft to patch the BOOT.WIM and INSTALL.WIM images from your Windows boot disk. The patching process adds the necessary USB3 (xHCI) drivers so that they load both prior to and during the installation process. The former is so that you can use the mouse and keyboard to even begin the installation. The latter is so that you are still able to use the mouse and keyboard once the first phase of the installation completes and the machine reboots. After patching, you can make a new disk with the modified BOOT.WIM and INSTALL.WIM files, and when you use this disk (or USB stick) to install Windows, everything will work as expected. The problem that I encountered is that NOTHING I did with the SuperMicro supplied USB drivers (and I tried every method out there) would create a BOOT.WIM that would give me a mouse and keyboard after booting. The patching process would complete successfully, but it had absolutely no effect. Thinking I was doing something drastically wrong (even though I've successfully completed similar procedures in the past), I tried the automated ASRock patching utility (since they have boards that use the same USB drivers). Amazingly, this DID work ... somewhat. I got a mouse and keyboard upon boot, so that I could begin the installation ... but once the machine rebooted, I had only a mouse cursor that wouldn't move and a keyboard that wouldn't function. Eventually, I tried manually patching again, but using the ASRock supplied drivers instead of the SuperMicro ones. This showed me that their drivers were successfully patching my BOOT.WIM image, but that the INSTALL.WIM image was producing an error. (Which, when you think about it, is consistent with what I was seeing ... but the ASRock utility never reported an error status, I HAD to attempt to patch manually in order to see this). Finally, I hit upon the idea of using the ASRock patched BOOT.WIM (since this seemed to work in getting the installation started) and the manually patched INSTALL.WIM that I had created earlier using the SuperMicro drivers (since the patching there completed without errors, even though I had never gotten far enough in the installation to test them). And THAT my friends, was the solution! Using those two files, created from two slightly different versions of the same Intel USB driver ... I was able to make a working Windows 7 installation disk that supports this board. Now that I have that disk, if I need another Win 7 Skylake machine, I'll surely choose this board. However, if you're starting from scratch, I'd recommend finding a board where there are reports of the BIOS option working. That's orders of magnitude simpler, and will save you loads of time. Not sure why it didn't work for me, and one board is a terribly small sample size to draw any definite conclusions ... but the fact remains that it didn't. On top of that, the whole driver fiasco was just weird. Why the SuperMicro drivers successfully complete the BOOT.WIM patching process but then fail to produce a working mouse/keyboard is beyond me. Especially when the same manual patching process (and same drivers) work fine to patch the INSTALL.WIM image that's used once the OS boots on its own. Hopefully, SuperMicro will address this by making the BIOS option a bit more robust in a future revision.

1 out of 2 people found this review helpful. Did you?
Manufacturer Response:
Thank you for your comment! Supermicro needs your comment to improve our quality and service. If you still have any question, feel free to contact us. Please see the below technical support contact information: Phone: (408)503-8000 Hours: 9:00 a.m – 6:00 p.m. Pacific Time (Monday – Friday) Email address: support@supermicro.com You can also submit your issue online: https://webpr3.supermicro.com/Support/login.aspx? Please do not hesitate to contact us if you have any question. Thank you! SM Technical Support