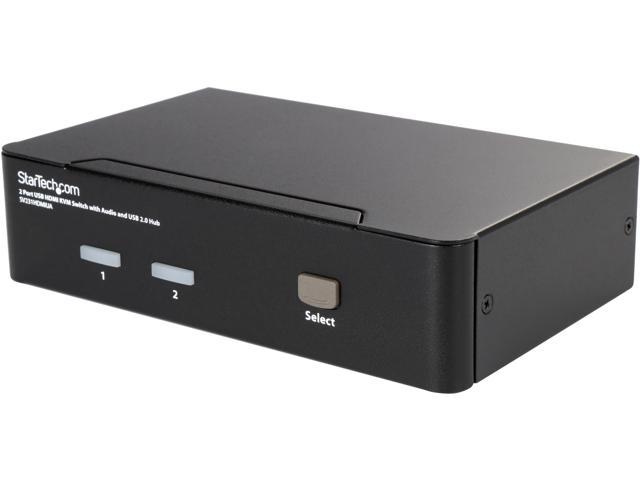 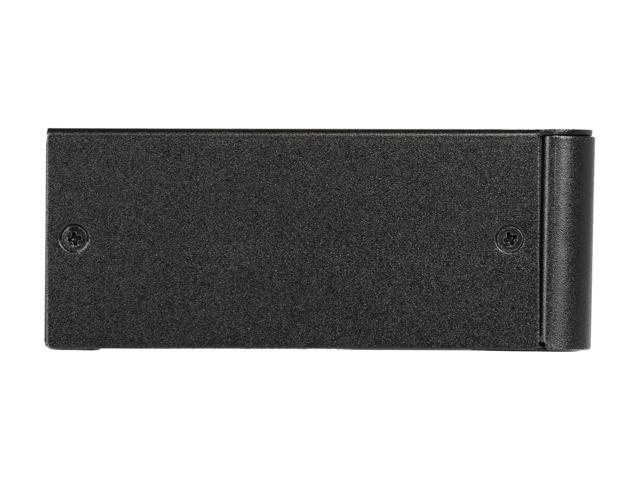 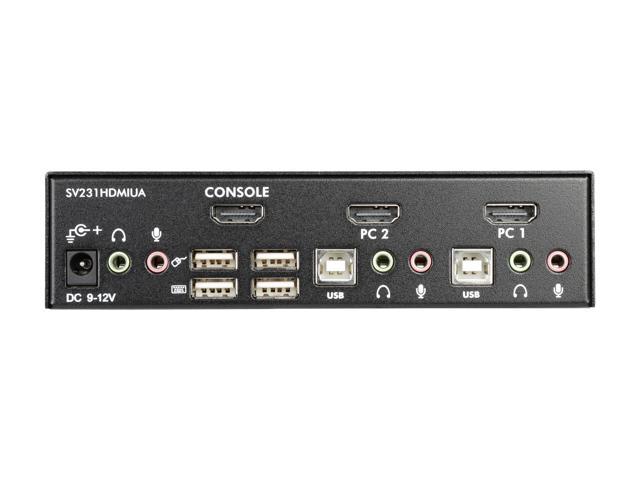 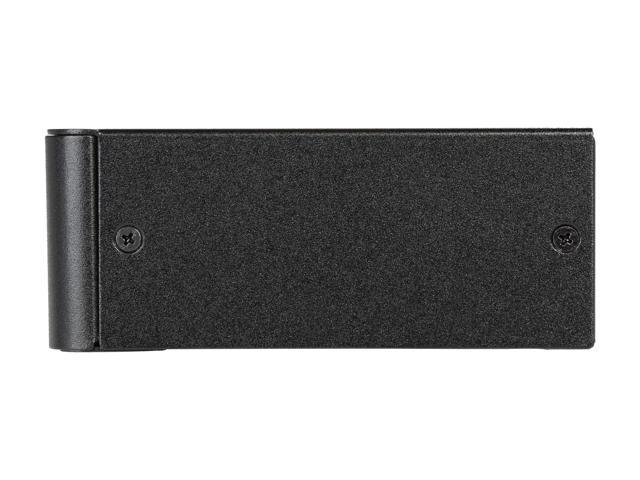 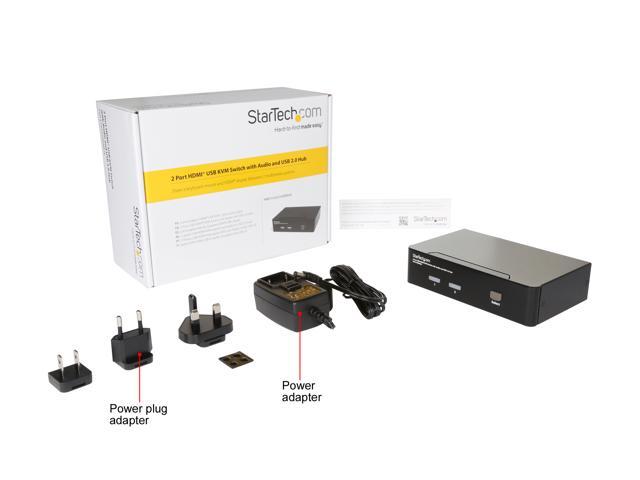 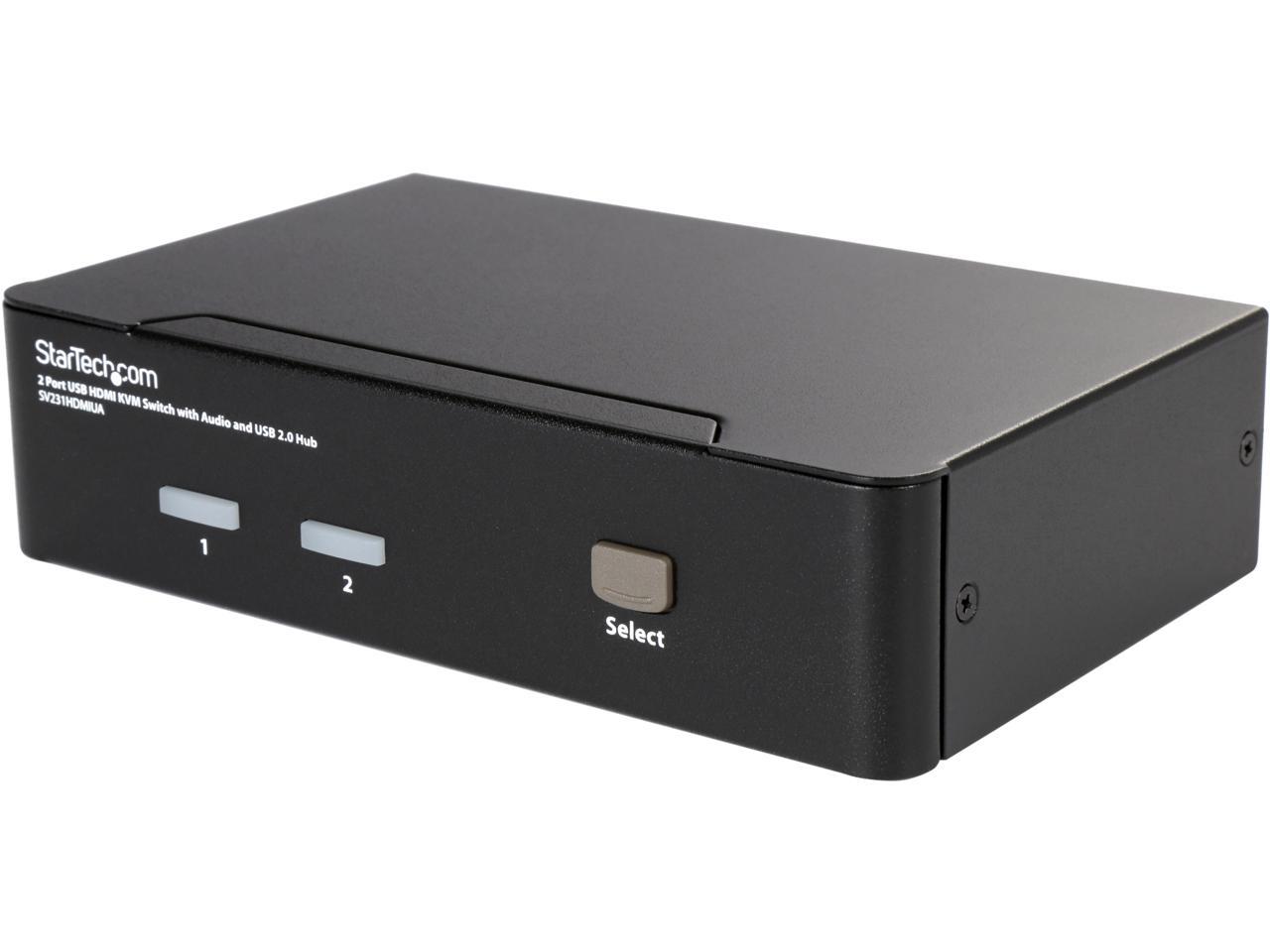 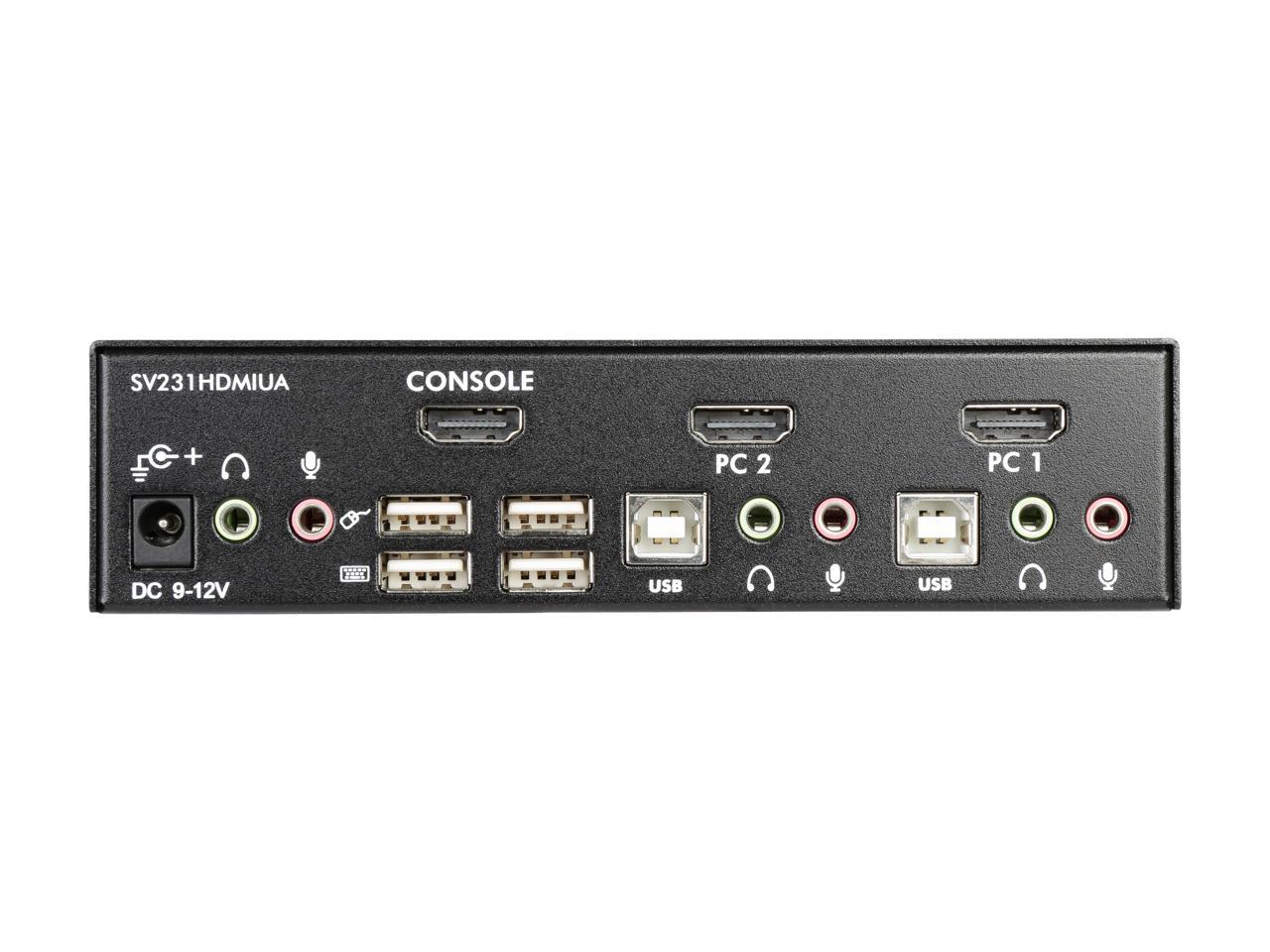 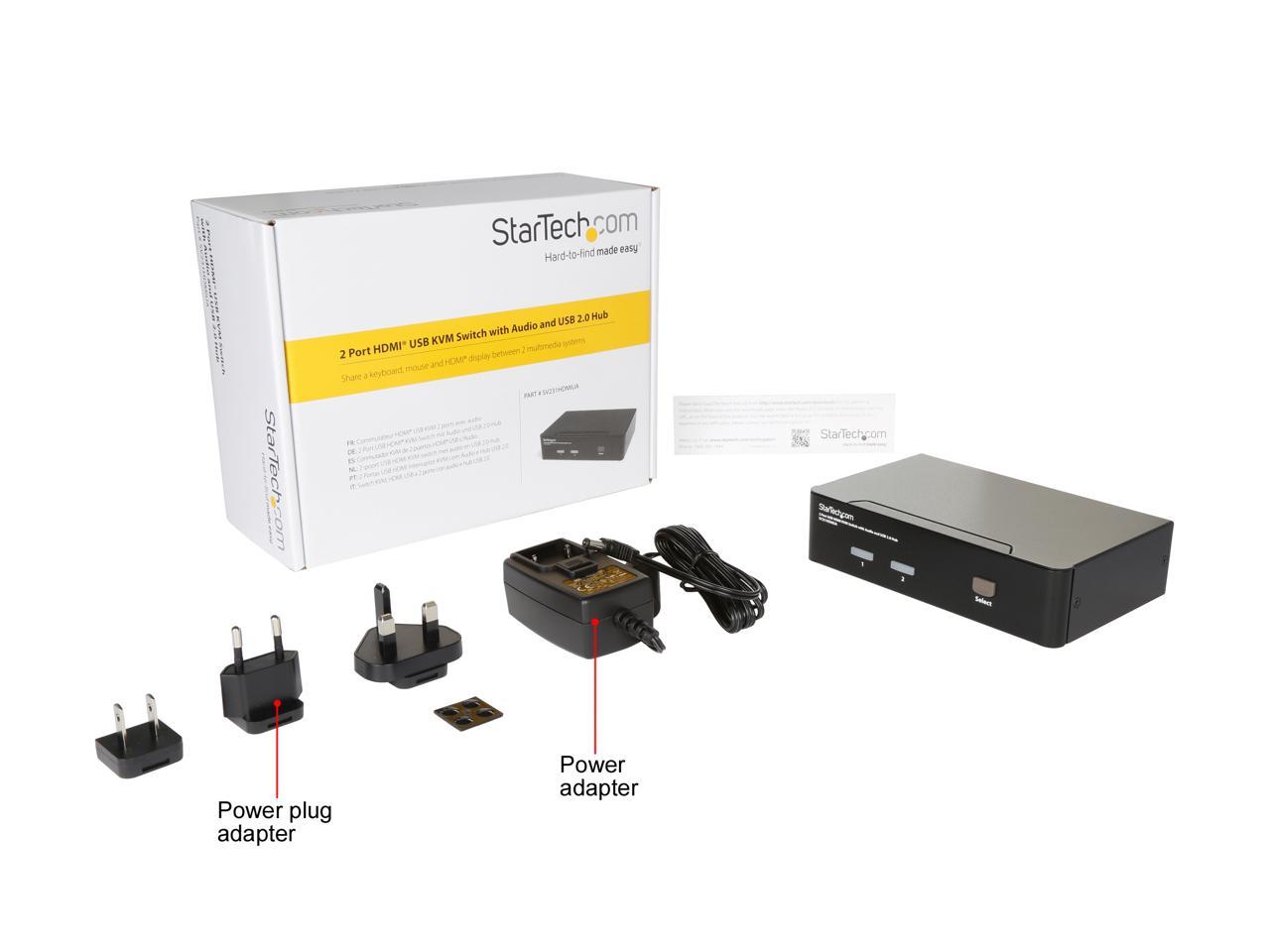 Learn more about the STARTECH SV231HDMIUA

Cons: 4K/UHD monitor is not listed as a requirement No manual - 2 page quick start guide is all you get No OSD is fine for me, but may bother some

Overall Review: 4K monitors are a requirement for this KVM. The KVM will not display 1080P via HDMI (though it will with a DVI adapter at the monitor). That may seem obvious after the fact, but should be in the requirements. I found this out after trying multiple cables, different adapters, each output of the video card, basically wasting a lot of time. Finally hooked up KVM output port directly to a UHD TV, which worked. If you're planning to get this KVM purchased and set up, then upgrade monitors, do the reverse. Monitors first ($800 I was hoping to spend next month, not immediately). Update: Reducing the rating to 2 stars. I am now experiencing a random failure to display a monitor issue. Workarounds are things like reset the KVM, switch back and forth to another powered on computer. My view now is this product was brought to market without sufficient testing. In the absence of firmware update (hopefully) that addresses my issue and others I see in reviews I do not recommend purchase of this product. The product has potential but does not work as advertised at this time.

2 out of 2 people found this review helpful. Did you?
Manufacturer Response:
Thank you for your review of SV431DHD4KU. We're sorry for the problems you've had with it. This KVM switch works with monitors of any standard resolution up to 4K, including 1080p displays. We'd like to look into the issues you've had with 1080p monitors as well as the intermittent disconnections to help get everything working, so please contact our free technical support at 1-800-265-1844 or www.startech.com/chat. We're available 24 hours a day, 5 days a week, to provide support. Sam, StarTech.com Support
Anonymous
Ownership: less than 1 day
Verified Owner
A KVM with No Cables?2/27/2017 8:54:43 AM

Pros: Feels solid, and HDMI/USB3 functionality are great in theory.

Cons: Over $300 for a KVM that doesn't include any of the necessary USB or HDMI cables seems quite expensive. Haven't been able to use it yet since I now have to order cables separately.

Overall Review: Be aware of what this product does and does not include. Why not just raise the price by $20 and include the necessary cables?

Pros: Works smooth when it's working.

Cons: It stopped working - wouldn't feed keyboard/mouse input to one of the PCs.

Pros: It pretty much performs as advertised. I use it with a PC desktop, a PC laptop, and a Linux server.

Cons: It's not perfect. I have used it continuously for 3 months. I had to unplug the power once because the mouse went crazy. I haven't figured out how to switch systems using the keyboard 'hot keys'. The documentation doesn't provide any help; however, the front panel buttons work just fine.

Pros: - Very fully featured: only KVM switch I could find with USB3 and the two 4K HDMI ports - While there really should be a setup guide and FAQs when something goes wrong during setup, the customer support from StarTech was fantastic (which it really should be, given the price of this bloody thing).

Pros: Allows 2 computers to share a single monitor, keyboard and mouse. Supports HDMI 1.3 video and audio. Allows for a DVI device to connect via an HDMI to DVI adaptor and cable. You can hot plug USB thumb drives as well as external Hard drives into the back of the KVM.

Cons: I had high hopes for this. I might not have enough room for this, but here goes: The typing is absolutely horrible. Along with missing characters while you type there is the random "run away train symptom" where the last character you typed keeps typing at 30 characters per second all by itself. If this was not bad enough the switch back and forth between two desktops at the same resolution and frequency yields an "out of range" monitor display and a blank page. Sometimes simply hitting the select and swapping between computer 1 and 2 solves this problem. However, sometimes I have had to shut down the computer with the out of range display from memory (think XP, ALT + F4 then the U key). Sometimes the second computer will not boot because the video display is not seen by the computers video card through the kvm. The unit beeps at times when you are typing & are nowhere near the left control key (default key for swapping between computers) as if the unit's keyboard buffer is overloaded.

Overall Review: I have tested, and retested computer boot times with the KVM attached and with the KVM removed from the display, keyboard and mouse routing path. The KVM on average adds 15-20 seconds of extra boot time. My Windows 7 64bit Ultimate Core i7 beast with 12GB of DDR 3 @ 1600MHZ does not like this unit. The KVM has caused blue screens and kernel and search errrors. Hard to believe. I am heading back to two mice, two keyboards and using my HDMI monitor with a DVI and HDMI and just switching back and forth with the input type button on the monitor. This KVM inhales like an 8lb Oreck XL vac.

Cons: Once in awhile you may have to push the select button twice to get the mouse to work but it is no biggie.

Overall Review: This is my third review (one of my first two should be deleted since it was sort of a double post). I had to RMA the first box because there were so many dropped keystrokes it was impossible to use as anything but a door stop. I was worried the second unit would be the same way (bad design) but was pleasantly surprised when this unit worked right out of the box. Newegg.com was fantastic about the RMA. Out of thousands of dollars spent here this is only my second RMA and they were perfect about it. This is why I go to Newegg for everything before I check anywhere else.

Pros: HDMI. Heavy enough to not slide around the desk or get pulled backwards by the cables. Allows a person to have two computers connected to just one USB keyboard/mouse and a HDMI monitor.

Cons: Sometimes I have to cycle the selection button a couple of times to get the mouse to work. The biggest problem is the huge number of dropped characters while typing. I have had at least five while typing the last couple of sentences in this "cons" section. I may not be the best typist in the wrorld but this is getting a bit annoying. I will keep this unit for awhile but if it keeps dropping keystrokes I may get really upset and chuck it in the trash (well over ten errors now). This is wy I give it only three eggs.

Overall Review: I just bought this unit, along with a Microsoft Sidewinder X4 keyboard and a X5 Mouse plus all new HDMI and USB cables for this setup. I bought the better cables that had high ratings so they are not the cheapest. If you do a lot of typing like me you may want to hold off on the purchase. This unit just does not allow for typing (six errors to correct in this sentence alone). Even if you type real slow it drops keystrokes.