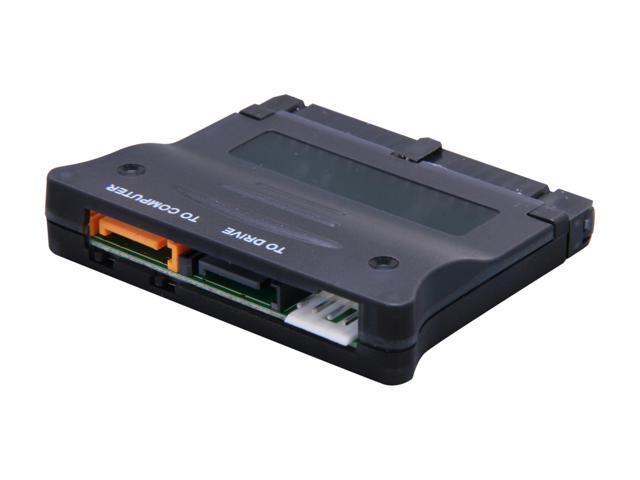 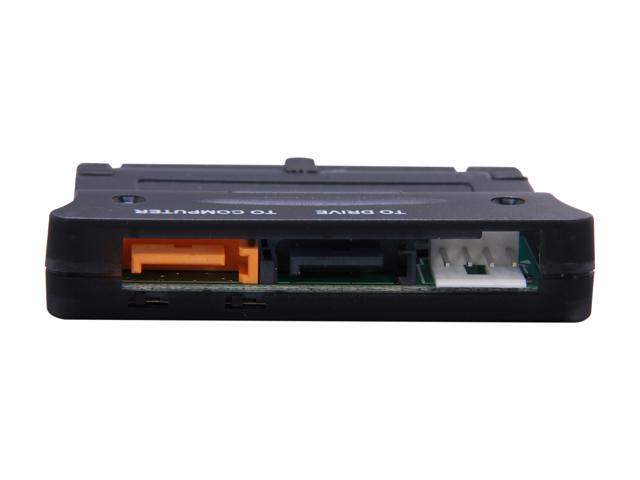 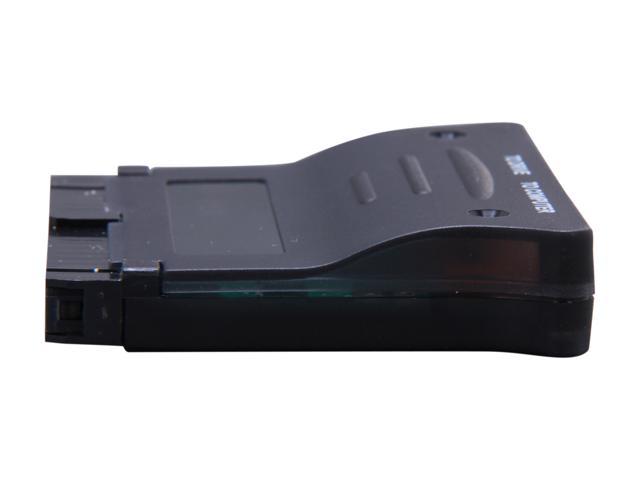 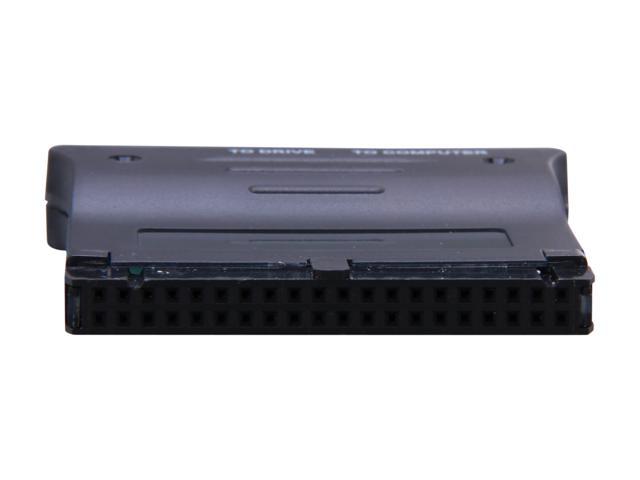 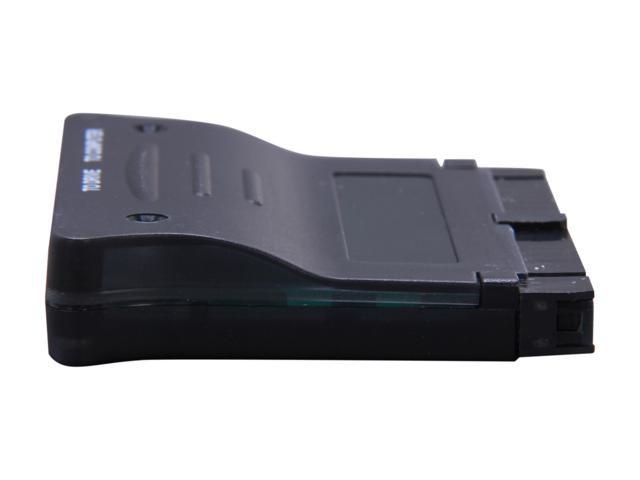 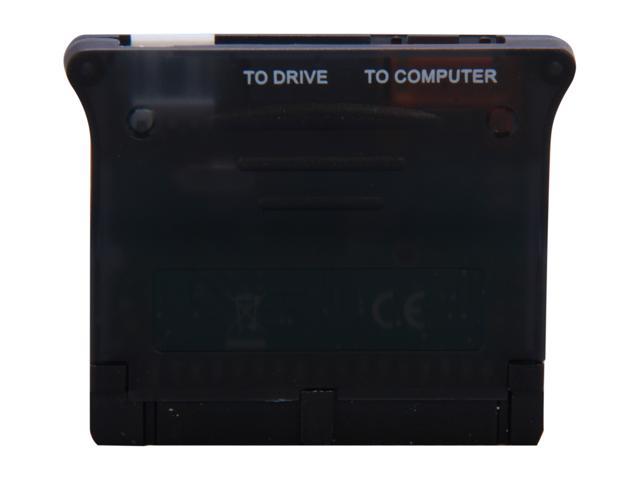 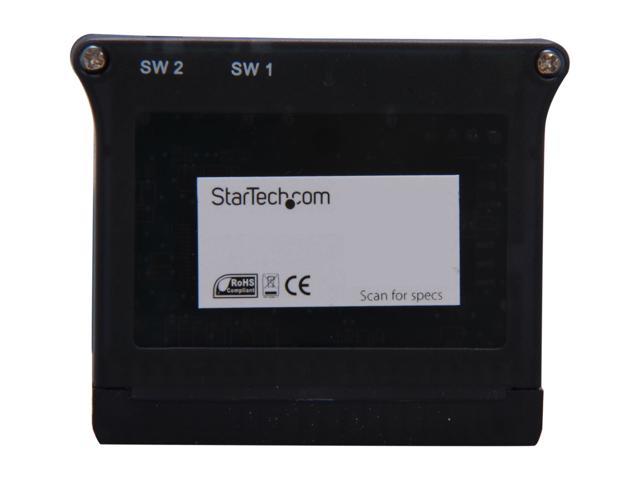 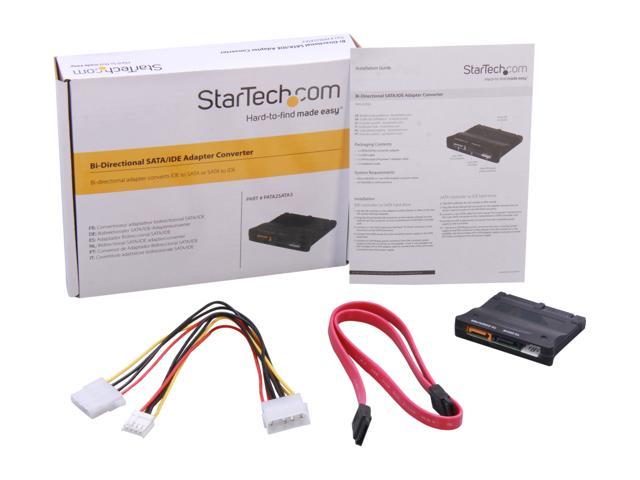 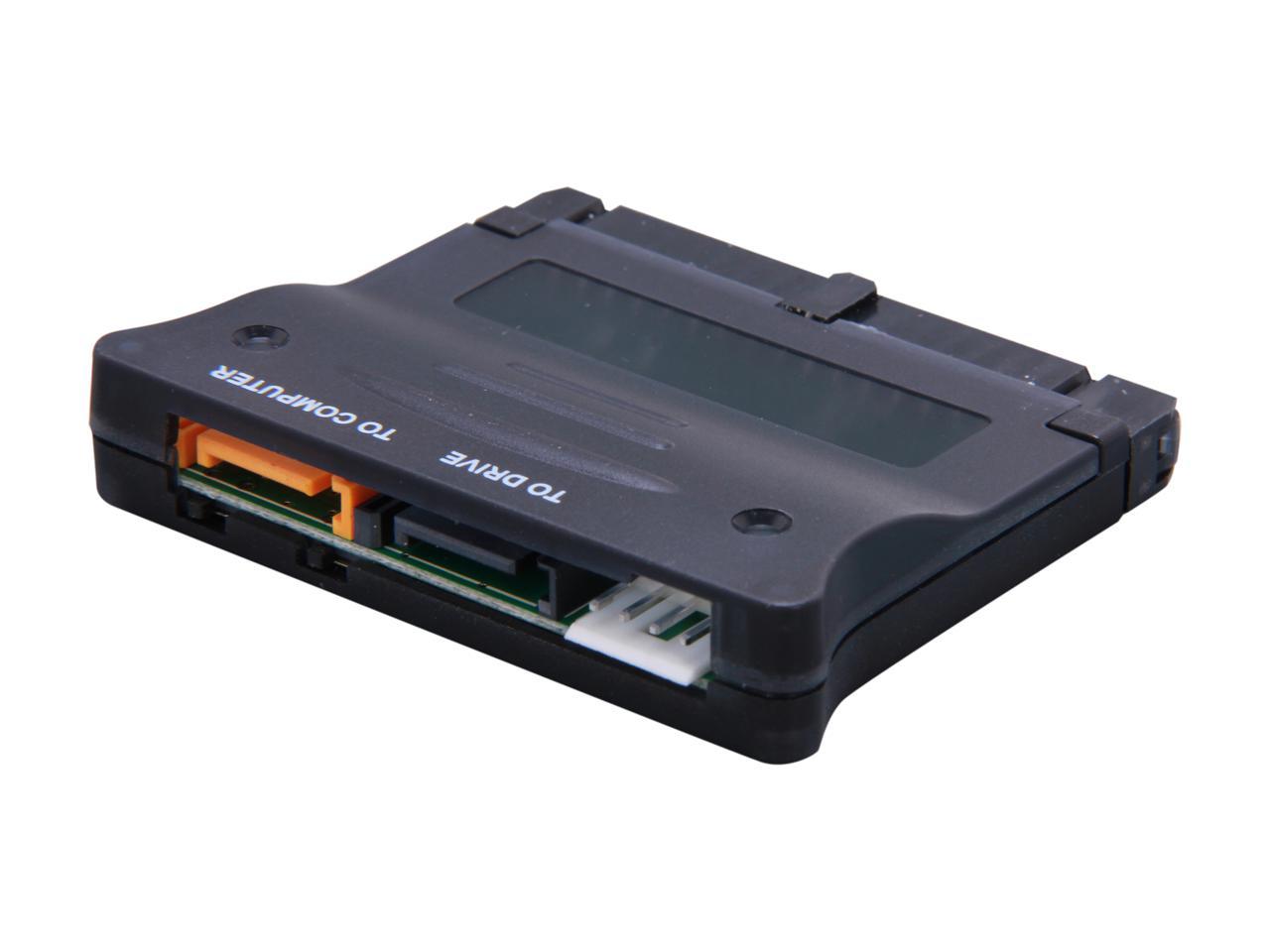 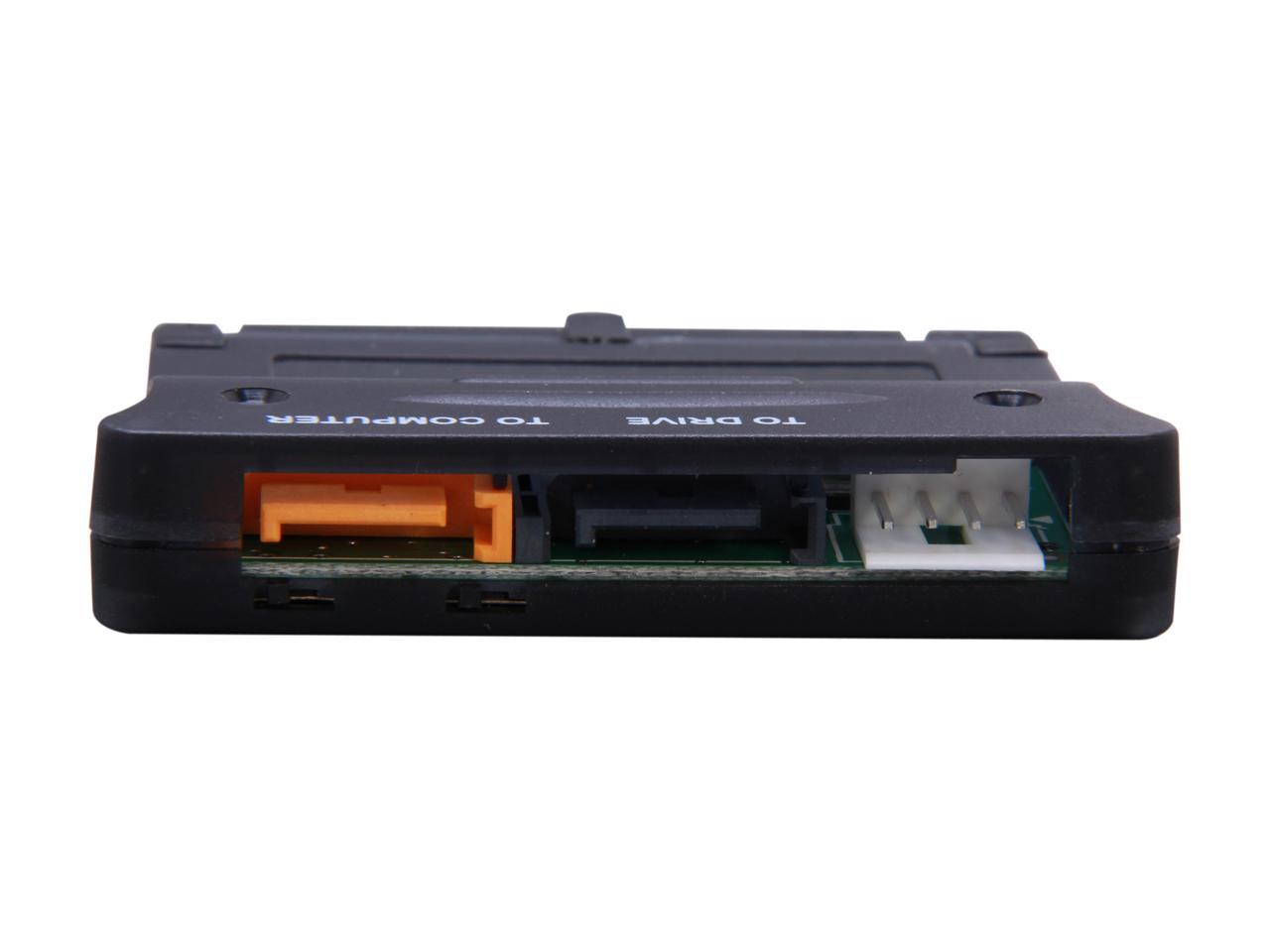 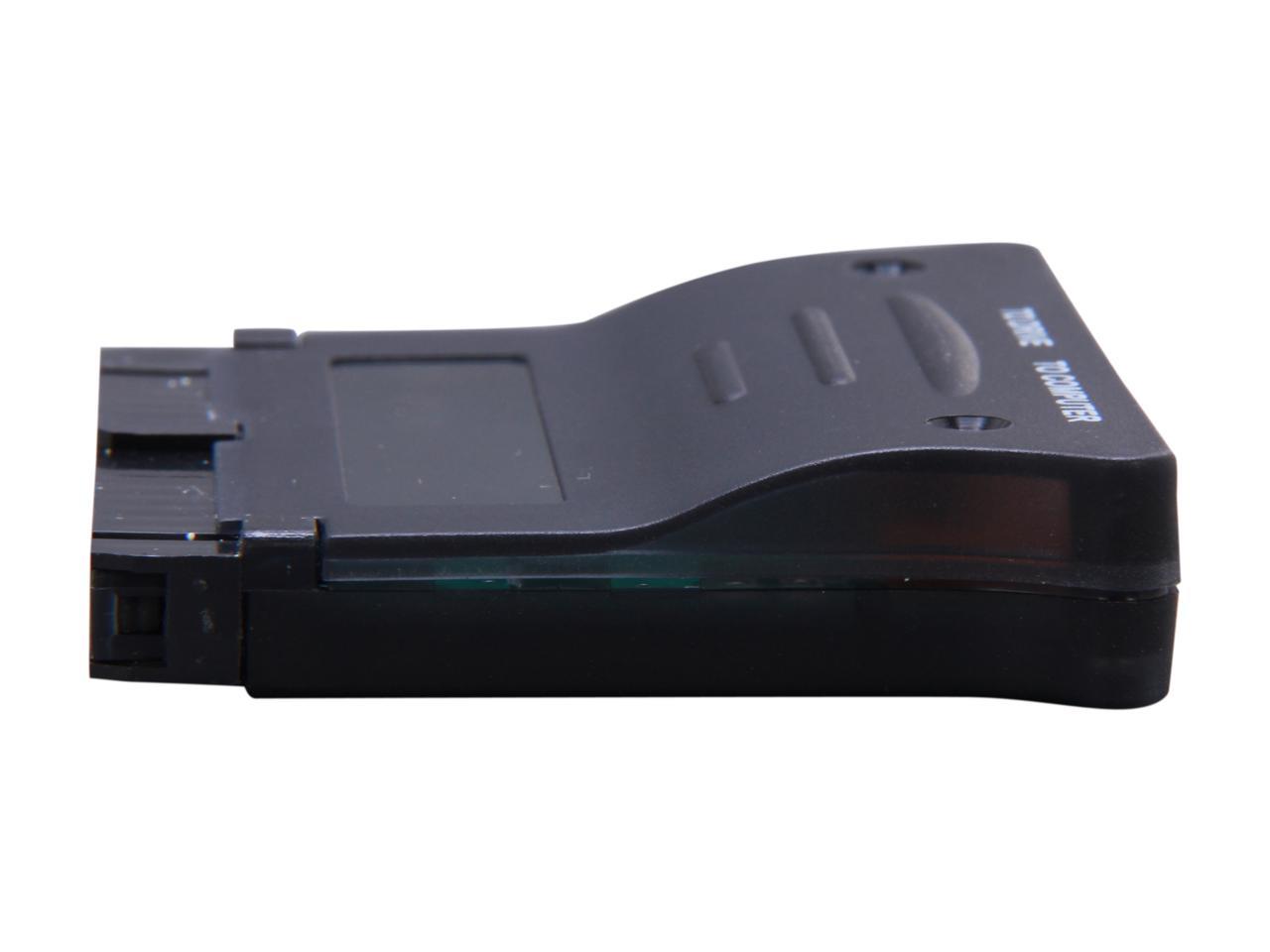 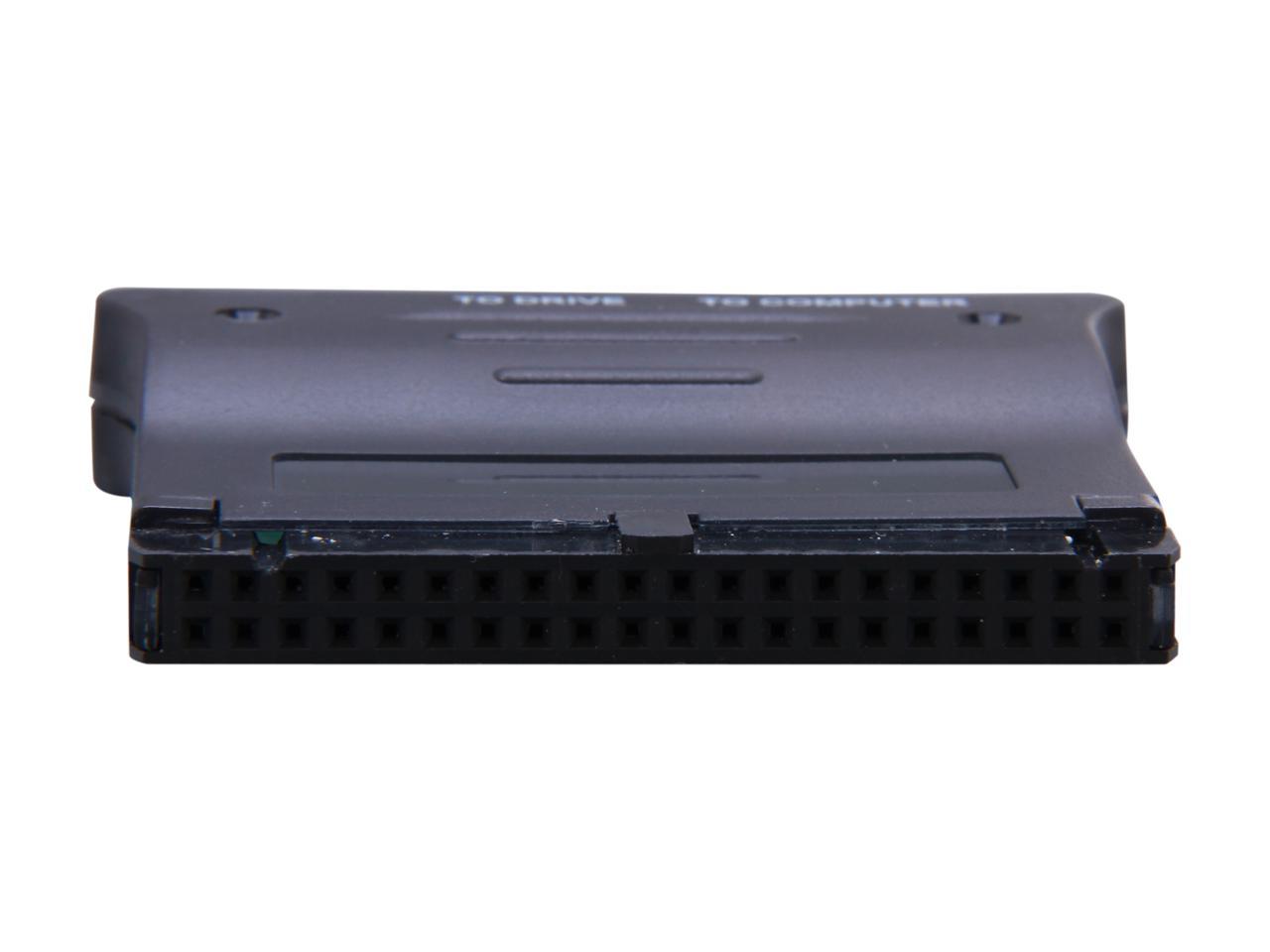 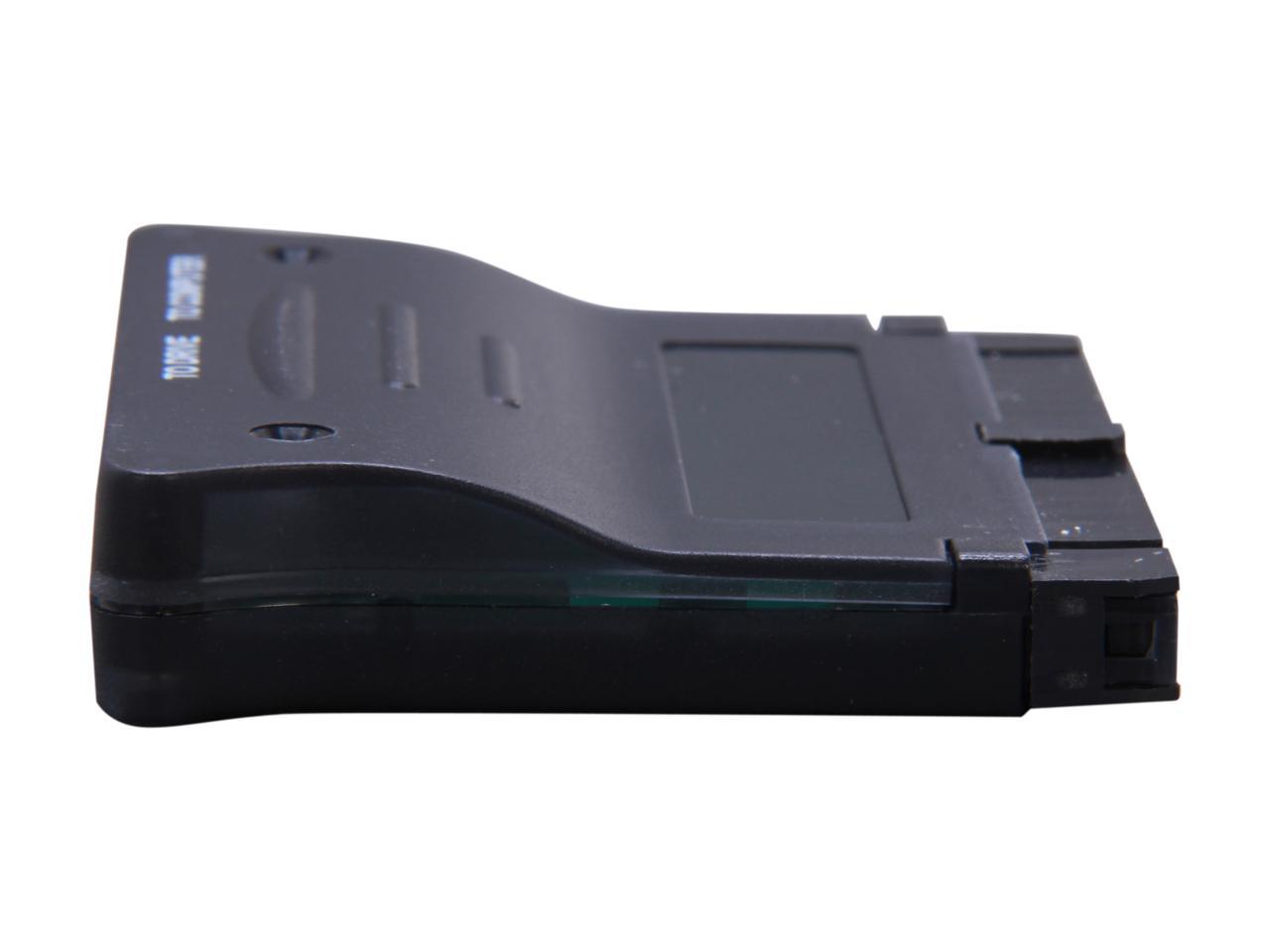 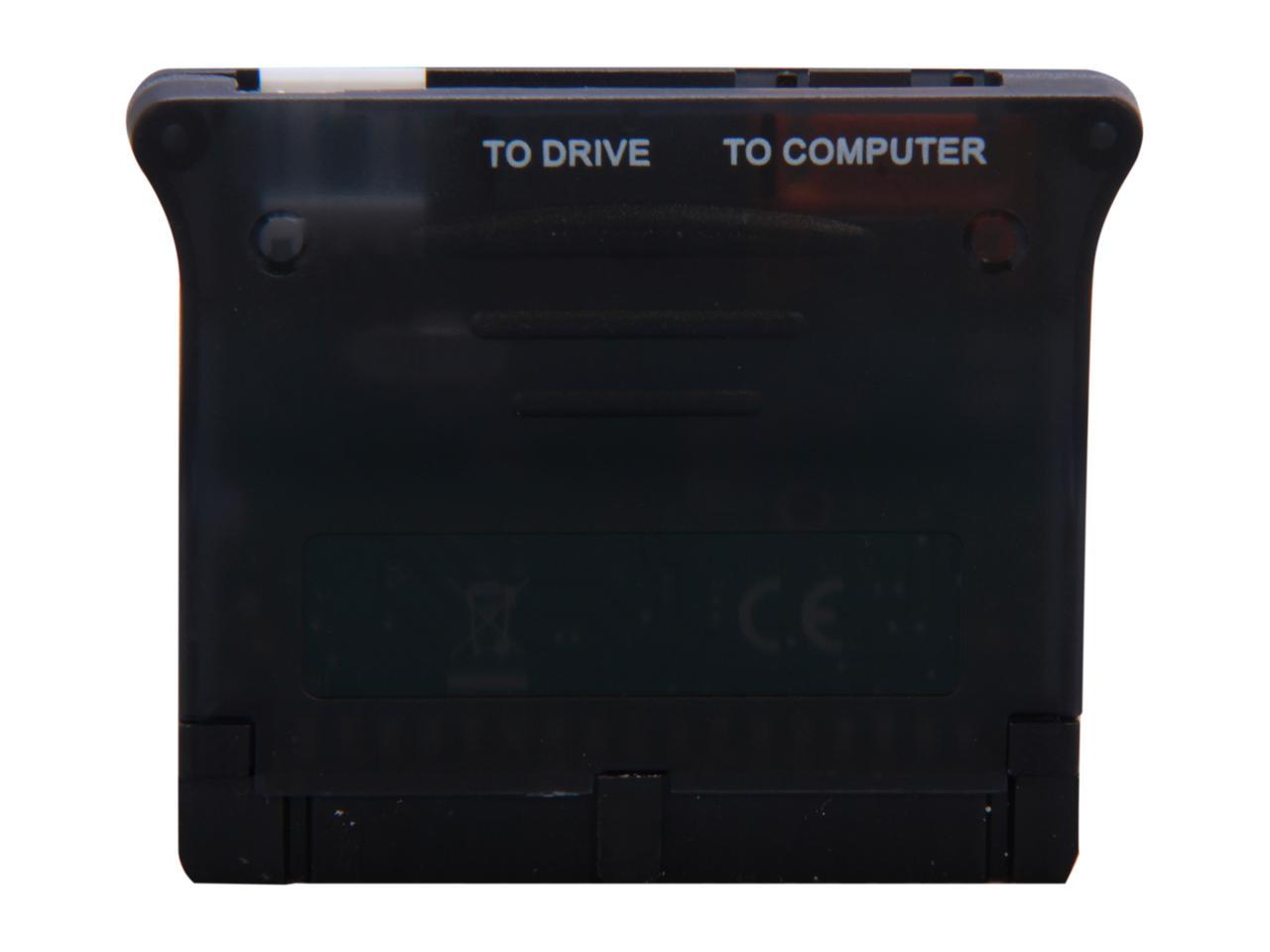 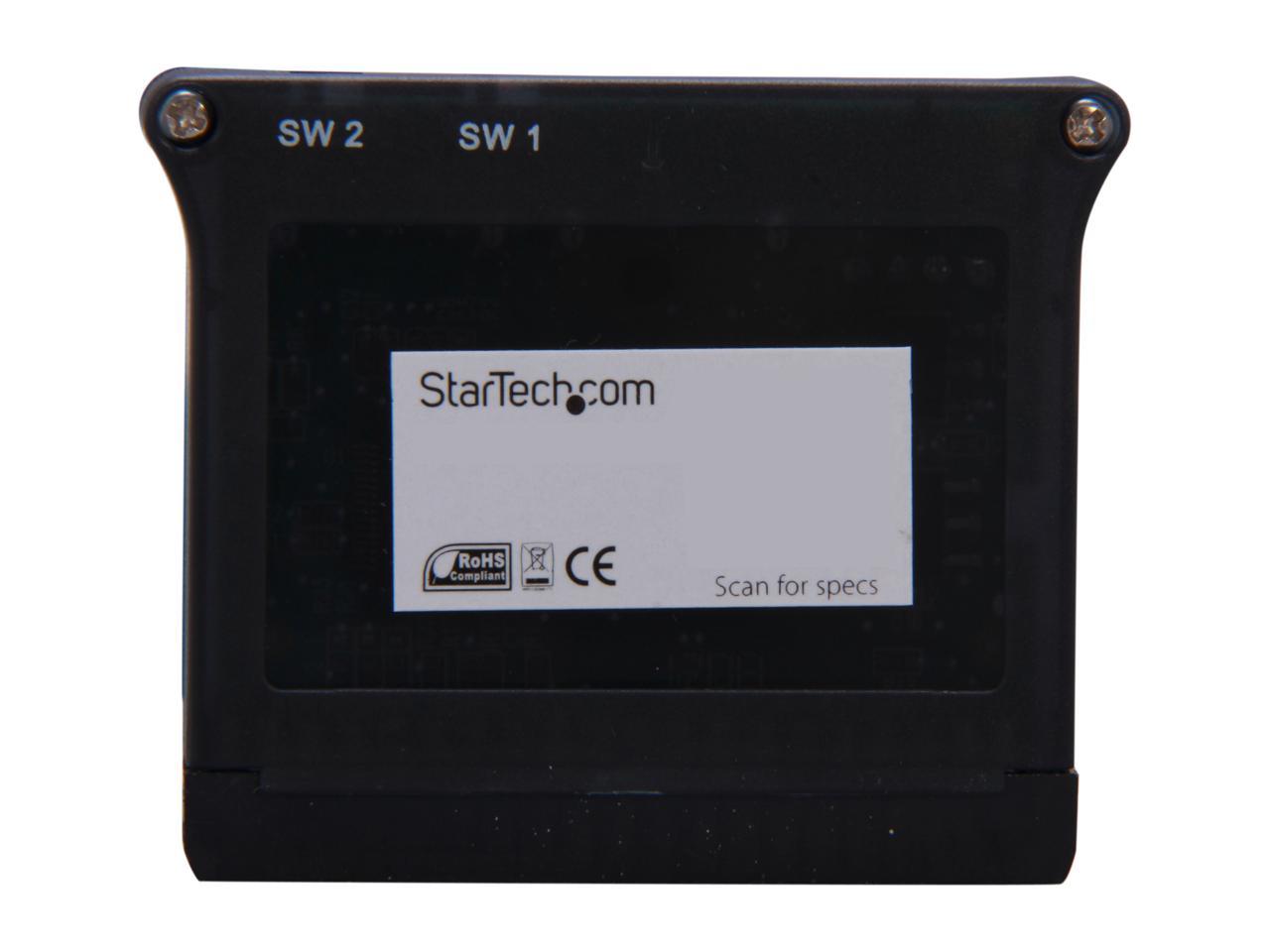 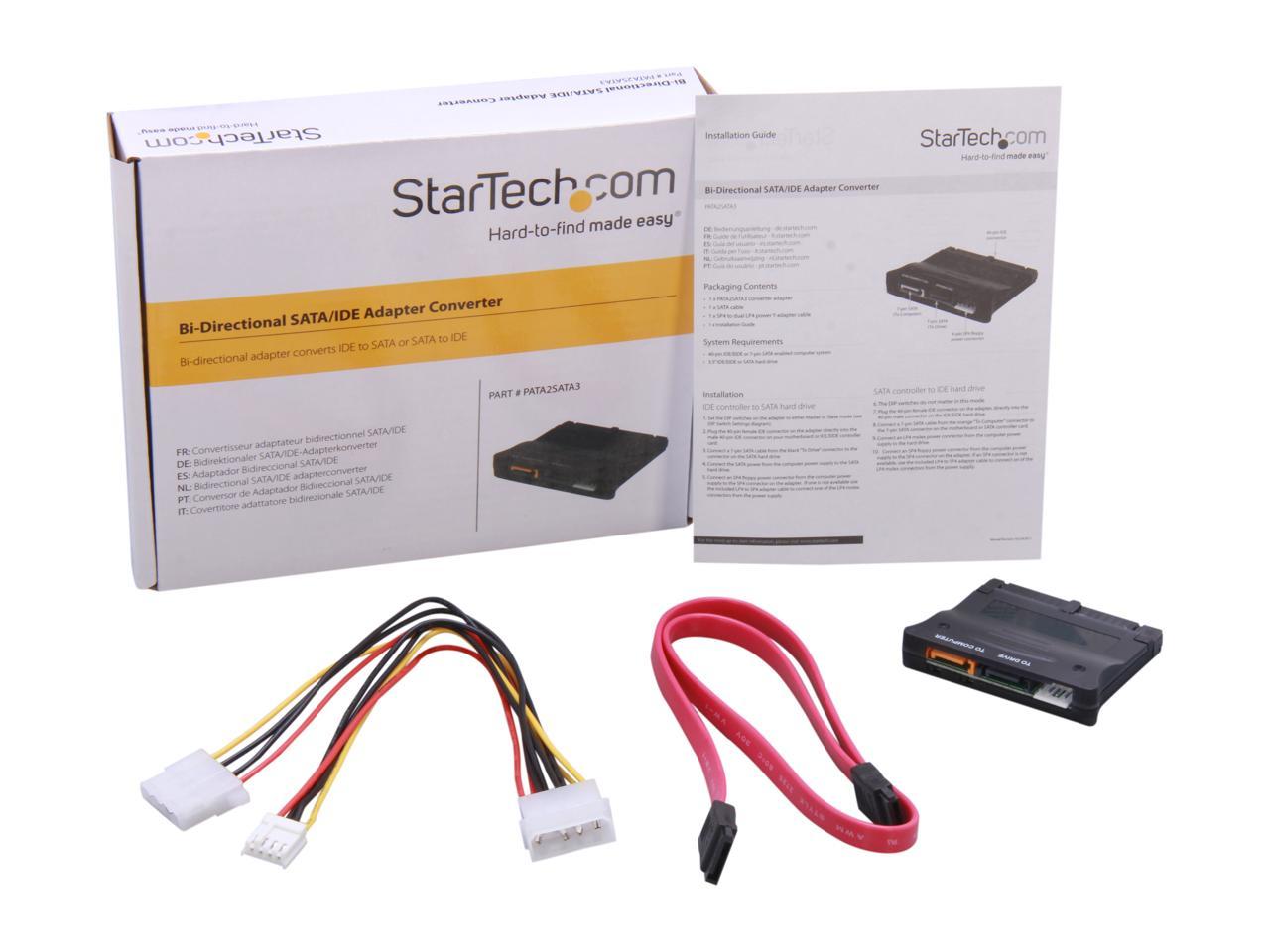 Learn more about the STARTECH PATA2SATA3

Cons: For the latter (SATA into IDE mobo connector), it means only 1 drive instead of 2.

Overall Review: Wish it had an IDE gender changer so it could plug into an IDE connector on the cable, instead of having to remove the cable and plug into the mobo IDE connector, losing BOTH devices. If you have 2 HDs & 2 CD/DVDs, you'll need to decide which to keep, possibly rejumper or use HD & DVD on same cable, slowing HD down. Also, remember that a SATA drive plugged into this device will be running at IDE (OK, UDMA at best) speeds, and an IDE plugged in here to a STA port, still can't go faster than IDE speeds (SATA II is 3Gbps, UDMA is rarely over 0.133Gbps)

Pros: Very easy to figure out and was delivered very fast

Overall Review: This was part of my first purchase through Newegg and I have to admit I was pleasantly surprised with the service and speed of everything. I didn't choose rush service but most of my order was processed same day! I know that may not be something that happens every time but I will definitely order from Newegg again (Actually just placed another order!)

Pros: I use these adapters for two IDE harddrives on a SATA III motherboard. These adapters were very easy to install following simple directions and were recognized on first boot up with no further configuration or fiddling necessary. Both adapters have been 100% trouble free since I installed them almost a year ago. These adapters cost a lot less than two new SATA harddrives would have.

Cons: Not really a con but an unknown -- I can't say how they may or may not work in SATA harddrive on IDE motherboard configuration

Pros: does what i need it to

Cons: none to speak of

Pros: Windows 7 recognized the Adapter and Kingwin KF-21 IDE mobile rack and "old" IDE hard drive without having to download or install additional drives. All I had to do was turn on the computer once everything was installed and plugged in. The Adapter comes with all the cables you need. Just connect the supplied SATA cable to the back of the Adapter and then to a open SATA port on the motherboard and you are in business. No additional controller needed. NewEgg had this in stock and shipped very quickly.

Cons: None that I can think of. Just be sure you have the room inside your case for it as it does add a couple of inches to the length of your hard drive. You may have to change your other hard drive SATA cables depending how they are attached if they are not the straight in type or are at a right angle. Just make sure you have room for the Adapter. Some folks will say it's slow - that is true - because you are running a IDE into a SATA motherboard - but to salvage my old computers data saved me hours if not days of work.

Overall Review: I used this with a Kingwin KF-21 IDE Mobile Rack installed in a new Windows 7 machine. Now I can transfer the data off my older IDE Windows XP computer's hard drive and also use the hard drive to back up to. That also means I can swap out other IDE hard drives too. It comes with everything you need, SATA cable, Power Cords, etc. Just make sure your case can handle the additional length of the Hard Drive rack and the Adapter attached to the back of it. My Cooler Master Elite 430 works well with this. The old drive and adapter were recognized without adding any drivers using Windows 7.

Cons: This is the Third time Ive bought Startech Junk and each time it was buggy or worked for a short time and then died. This worked for two weeks, or at least it read Blue Ray drive it a shame because it was much better built than some of the other things I tried but just becuase its stronger looking doesnt mean the person building it knew what they were doing

Overall Review: DONT Buy Startech unless you want to throw away money

Pros: I had an old ide hard drive that I thought had gone out but thought i would give this a go. Glad I did as it was the hard drive enclosure that had gone out. This was simple to use and now I have my old hard drive with the information on it still intact.

Overall Review: This was an inexpensive way to check the integrity of a hard drive. If you're unsure if a hard drive is still working or not this may help.

Cons: Didn't give me a winning lottery number

Overall Review: Took 15 seconds to read the directions and about 2 minutes to install. Turned the computer back on and it worked, first time. The first bootup was a bit slow as Windows reconfigured itself for another drive, but not worth breaking a sweat over. Unhesitatingly recommended.