OUT OF STOCK
Sold by: Newegg
Shipped by Newegg
Price Alert
Add To Wish ListFound on 8 wish lists 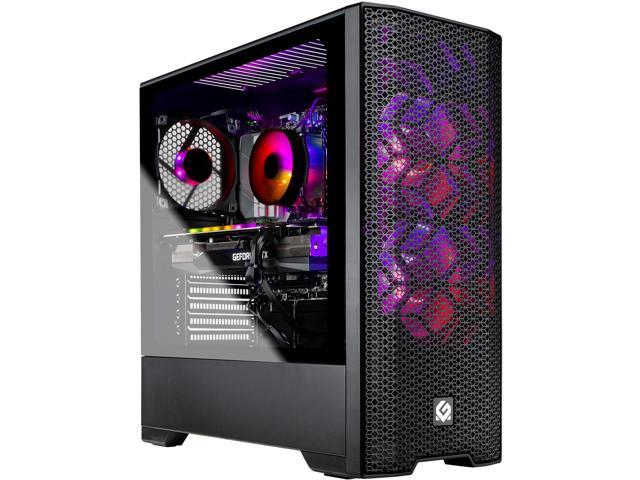 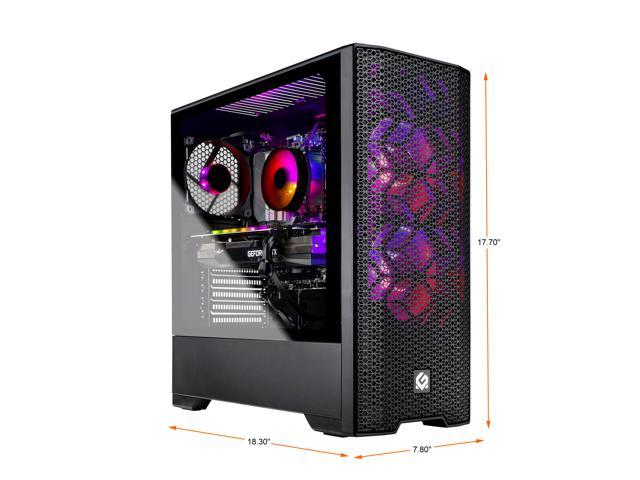 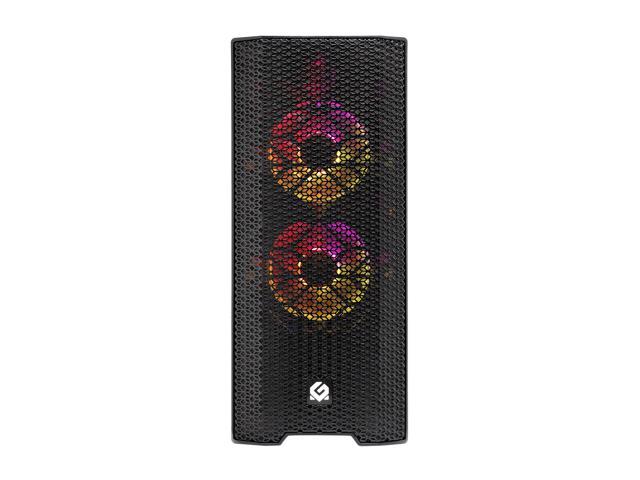 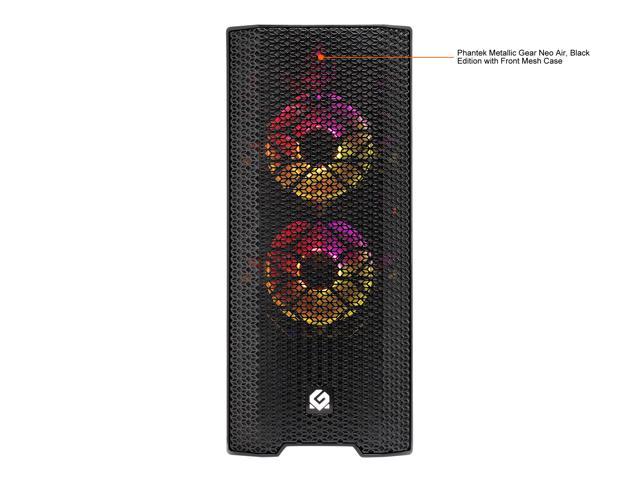 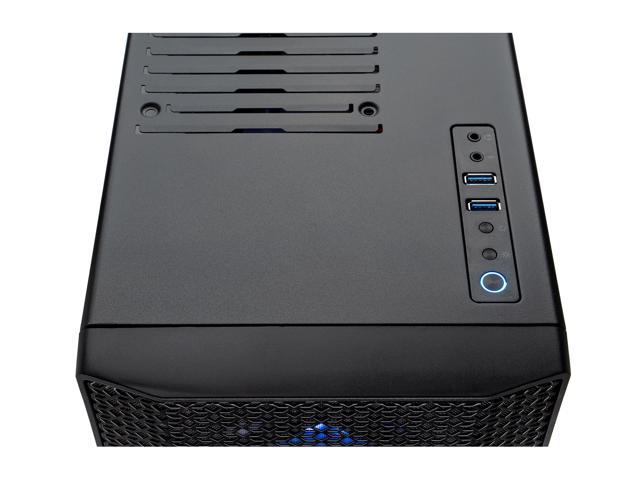 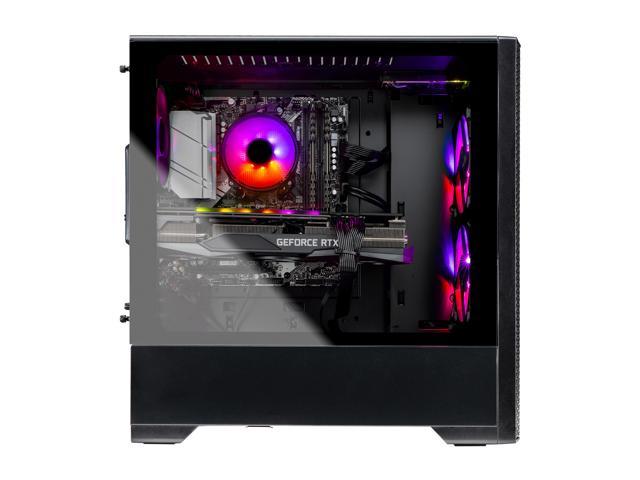 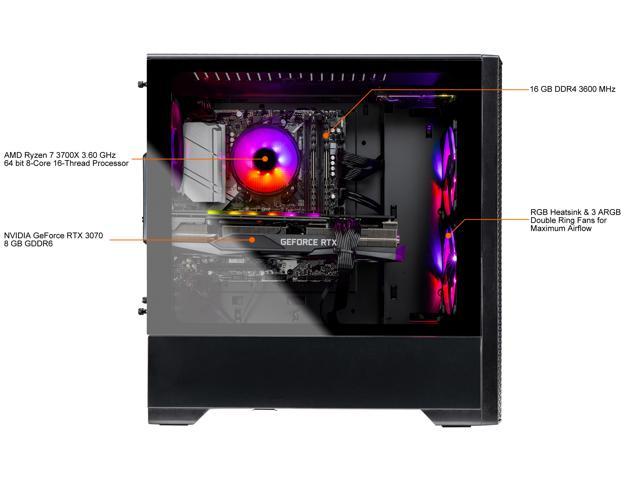 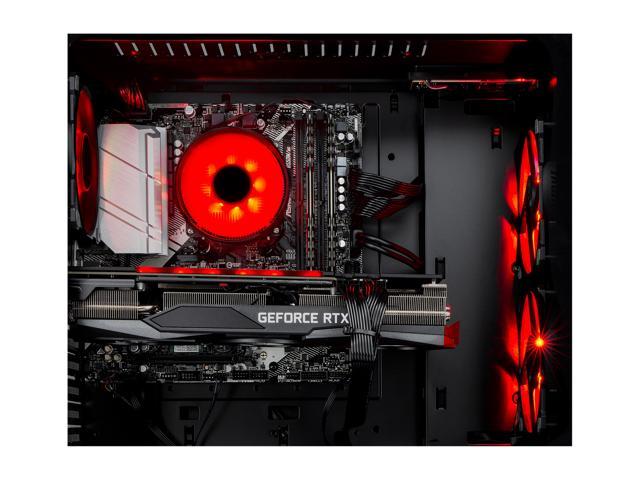 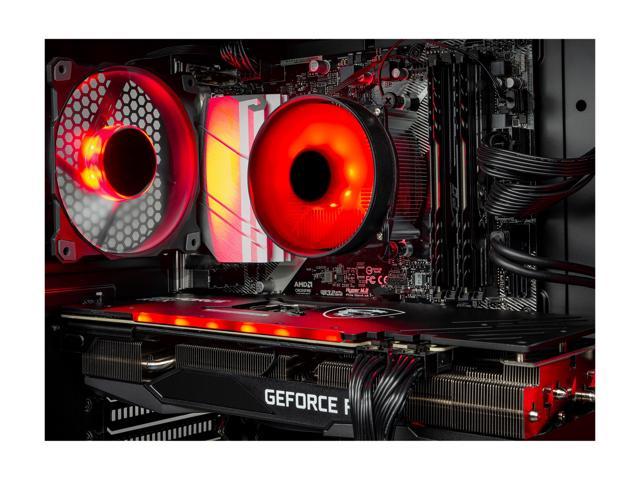 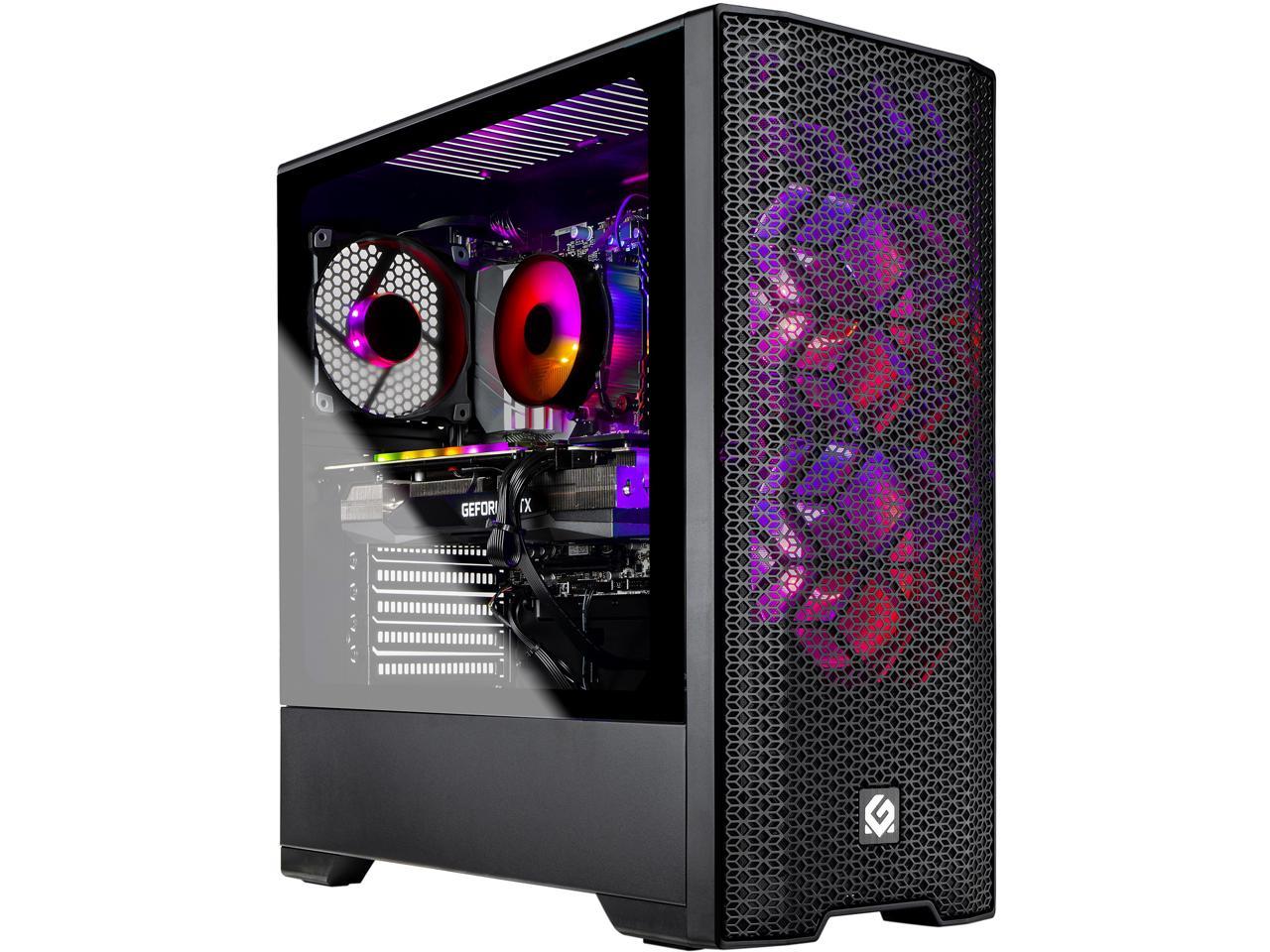 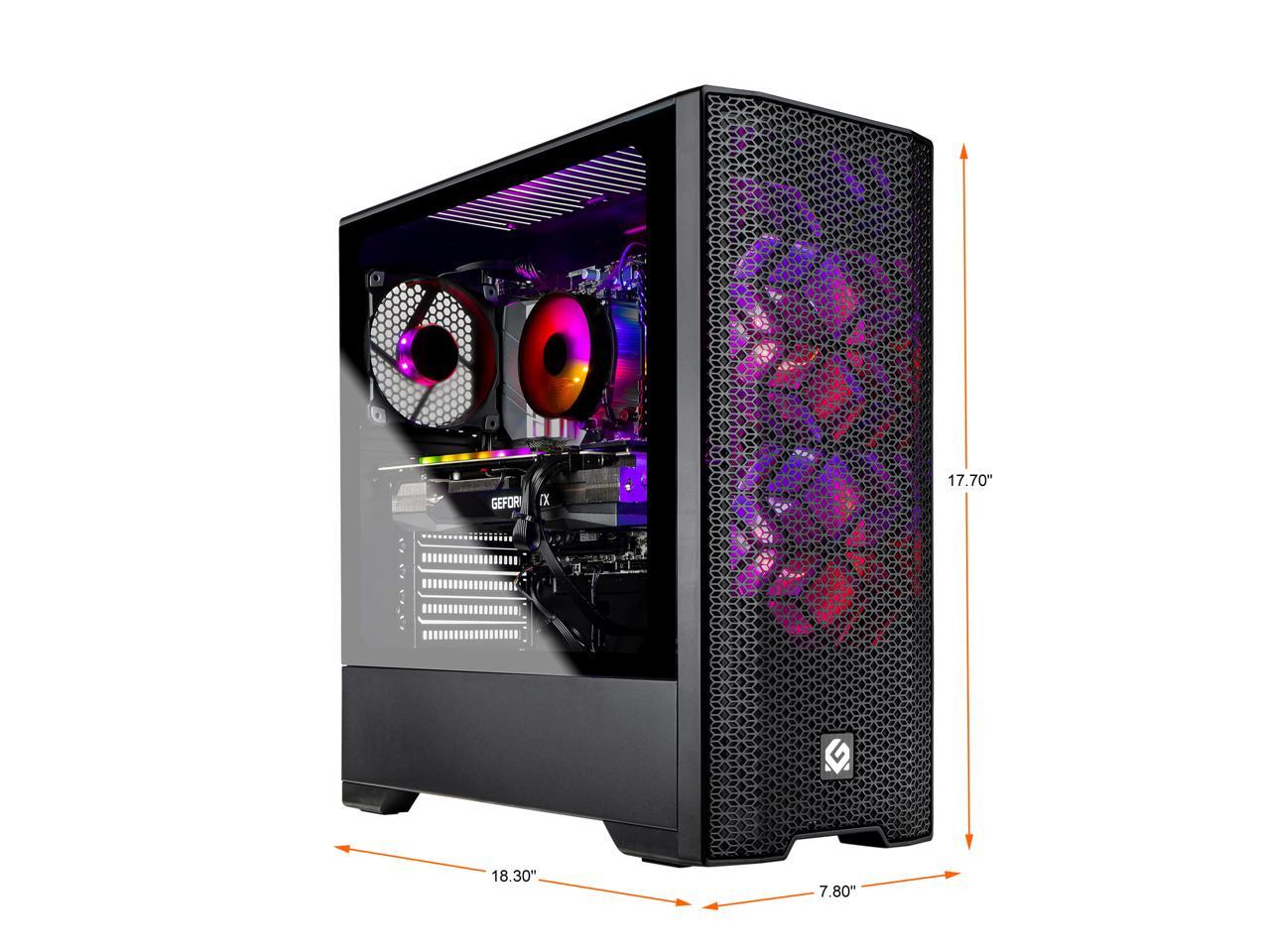 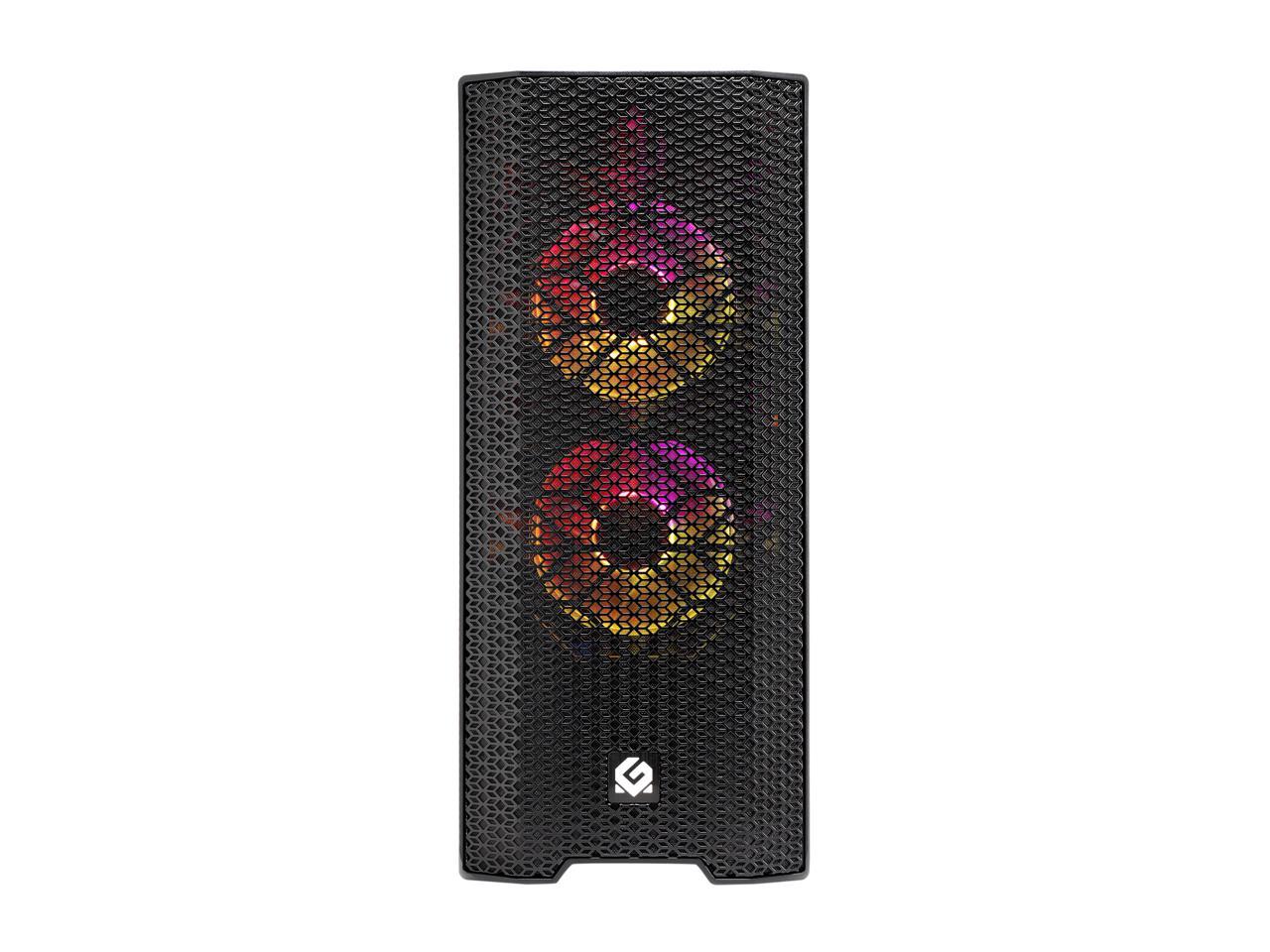 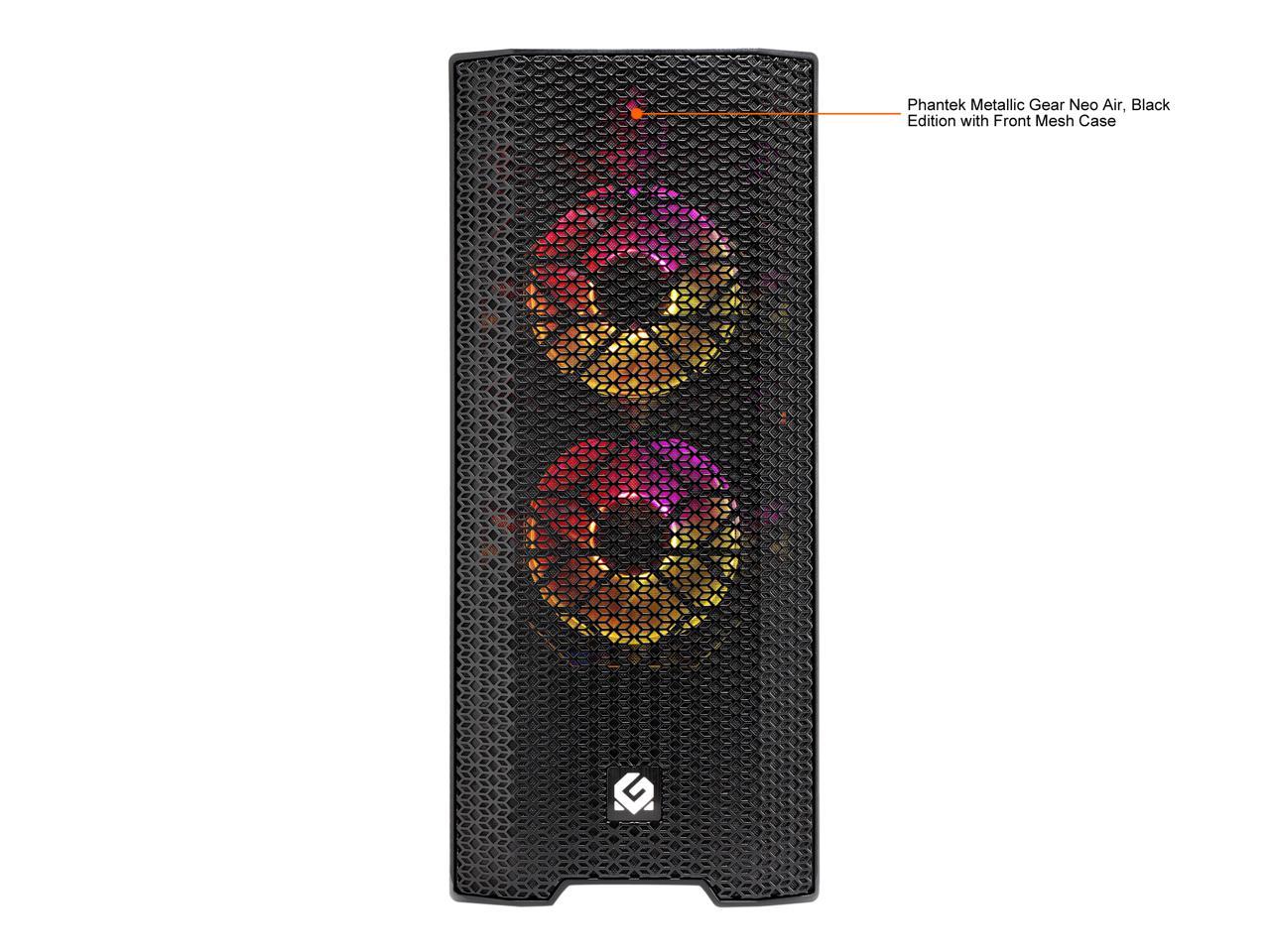 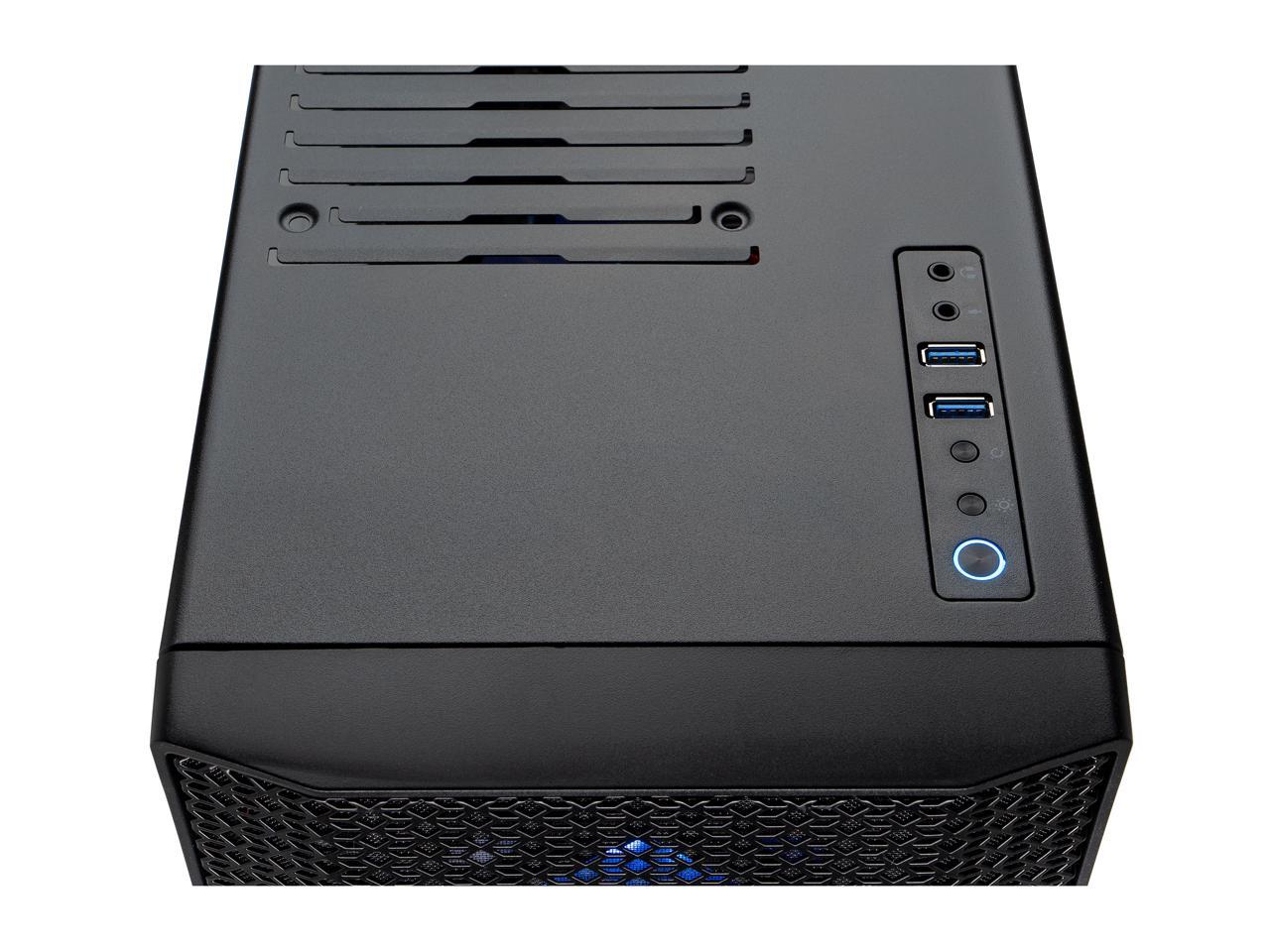 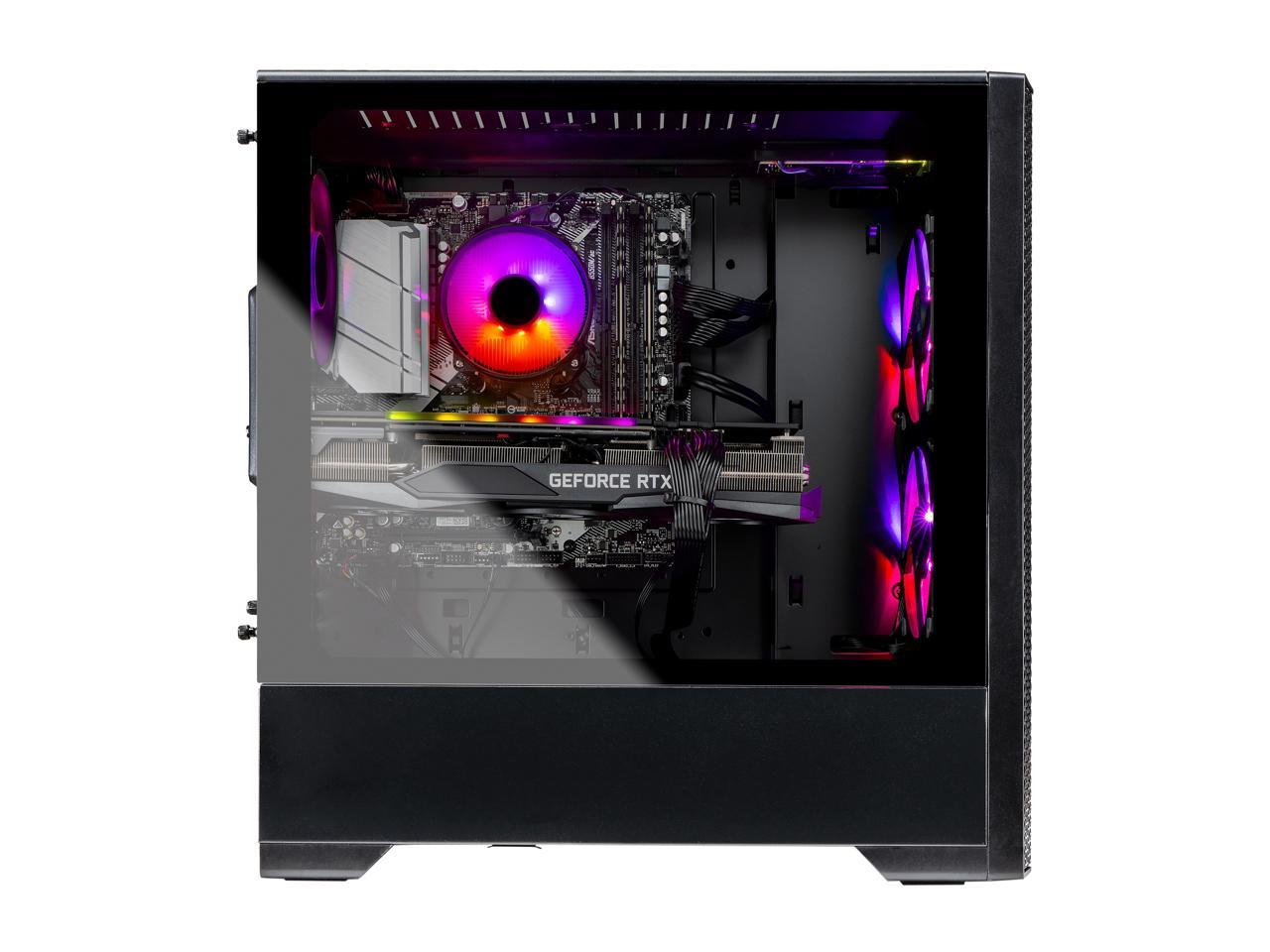 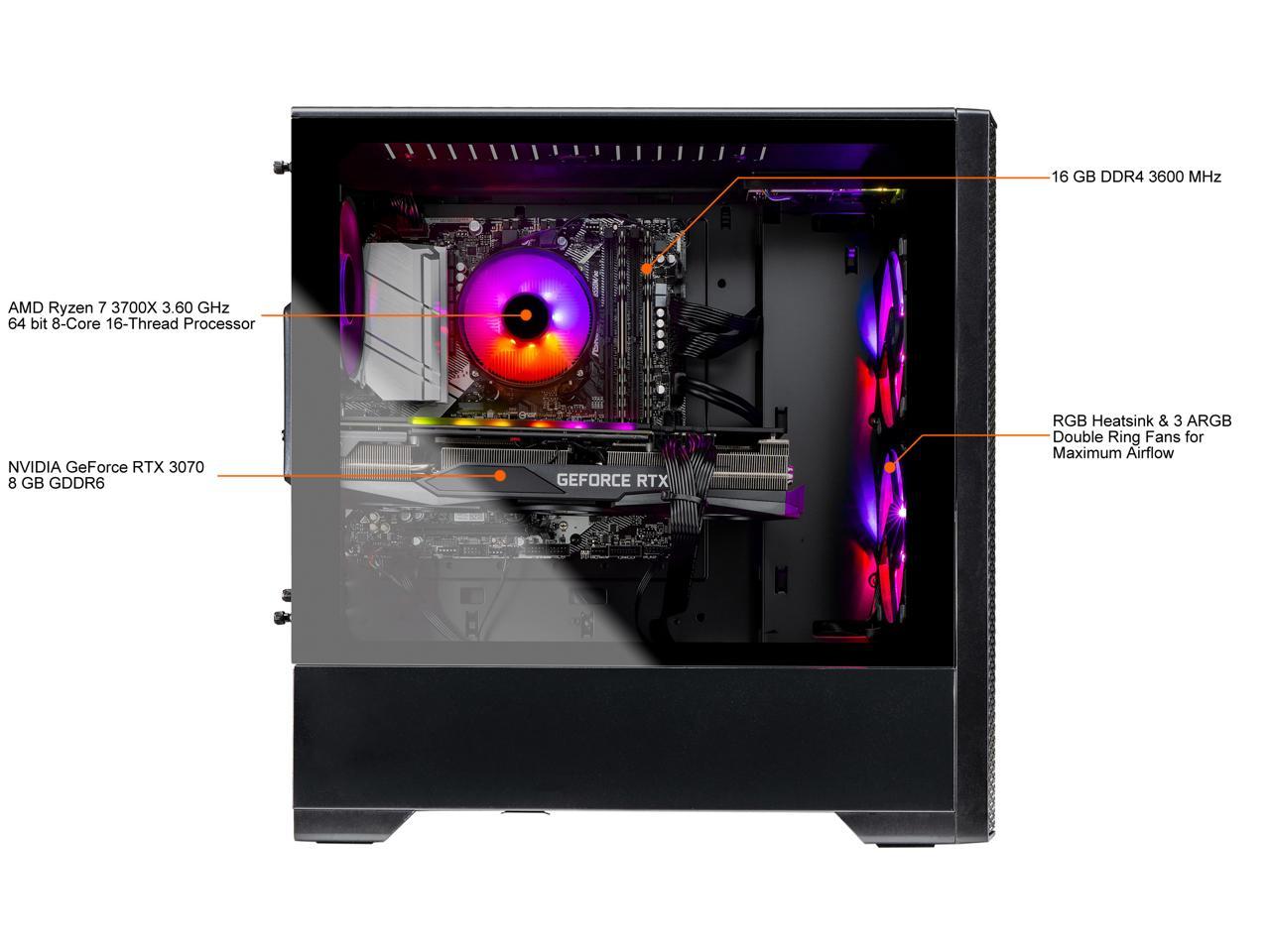 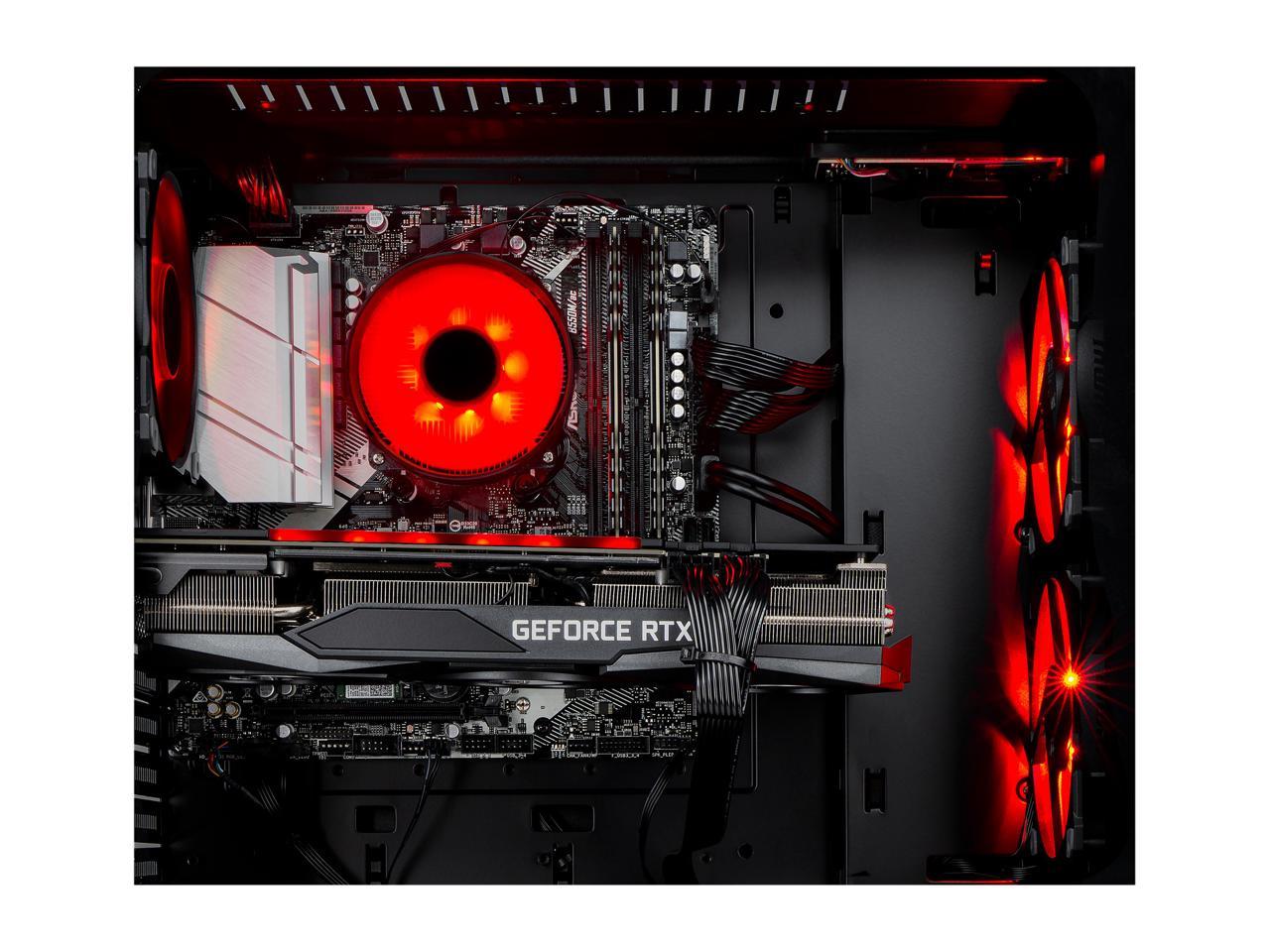 (85)(9) Write a Review
See more "nvidia 3070"
OUT OF STOCK.
Fees for brokerage and duty included in price.
Specs
Reviews

Pros: - Great with Premier Pro. - Apex Legends runs really well at full settings (144fps max due to monitor so could run at more) - Great cable management - Components are decent, good quality - Comes well packaged - Just plug the power cable and its good to go - Comes with a mouse and keyboard

Overall Review: This is a really good way to get your hands on a 3070. Wanted to build one with said graphics card, but they were hard to get at a fair price so I just bought this PC that basically has more or less the components I wanted. You can definitely do some upgrades and the case has plenty of room for it!

Cons: The only negative aspect was that there was some of the liquid foam they use for shipping dripped onto the pc case. It wasn't substantial enough to contact them about but I still can't get it off the case. Other than that, would recommend the pc and newegg

Cons: None that I can see for now.

Overall Review: Absolutely love this purchase. I purchased at 1699 which after it shipped and invoiced I noticed the price went up 100 so I think I got a good deal at the time. All components are good quality. Gigabyte video card. Asrocks motherboard. WD nvme. I'm sure they could be better but considering I wanted to build a new rig and couldn't find any CPU or Video cards anywhere, this came through when I wanted to buy.

Cons: - was missing keyboard, called skytech and they said they are sending one over. -the power and reset buttons weren't plugged into the motherboard when i received the unit. I found the motherboard manual online and found where to plug them in. then it powered up.

Overall Review: So far it is working great. I will update this review if any problems arise.

Pros: I am not much into gaming. I got this mainly for 3d animation and rendering. It keeps up with everything I need it to do. It came with everything that was advertised and worked perfectly right out of the box. It's extremely quiet (compared to what I am used to anyway). Cable management was nice. All the components I received were name brand. Including a modular PS.

Cons: None that I can think of.

Overall Review: I was hesitant to purchase this, or any pre-built, based on some of the reviews. I am happy I chose this. I couldn't put together a better system for the price.

Pros: I love it all. Yeehaw.

Pros: Looks great! Specs as advertised Setup was easy and straightforward Does not come with any pre-installed bloatwear (I appreciate this greatly)

Cons: The audio and mic jacks on the top of the computer could be shielded better - I get some static/feedback in particular when using it with Discord. Problem was solved by using the rear audio panel The onboard RGB contoller doesn't control sync up with the RGB on the graphics card - need to use two seperate programs to get all the lights to work in tandem

Overall Review: This is a great mid-range PC for gaming. I'm enjoying it so far - have not had any issues playing recent titles at max settings with it. Overall I'm very pleased with it. Makes me smile every time I turn it on.

Pros: Everything come assembled and ready to go, cable management was excellent and GPU runs silent and cool and the RGB fans make the PC amazing to look at night and the case is large and spacious with upgrade potential and good airflow. The top of the case allows for more fans or a water cooler to be added. The GPU that was included was the RTX 3070 ventus 2x OC and the motherboard included is the asrock b550m motherboard

Cons: Besides it obviously being over priced there are No major cons but if I nitpick the ram doesn't light up and the keyboard that is included has keys which are not satisfying to press and doesn't make the type writer sound but is non the less its a decent keyboard which I did not even know would be included

Overall Review: It is a great gaming pc and a wonderful way of getting the new RTX cards in this volatile market and is potentially a good deal since RTX cards will not be in stock for months, The performance is great and is a 1080p and 1440p gaming PC that you need to only plug in and immediately began playing