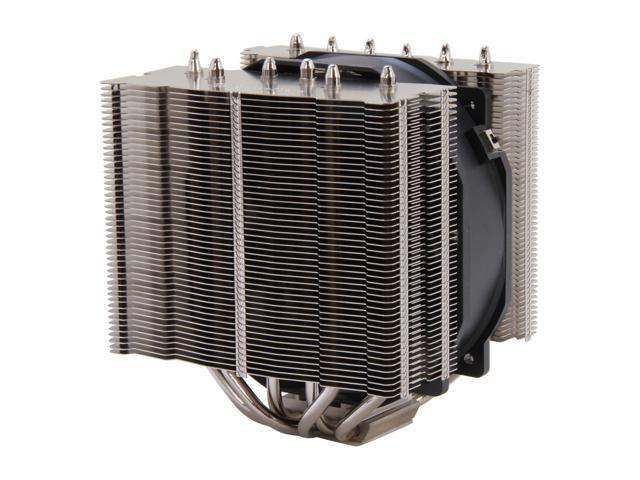 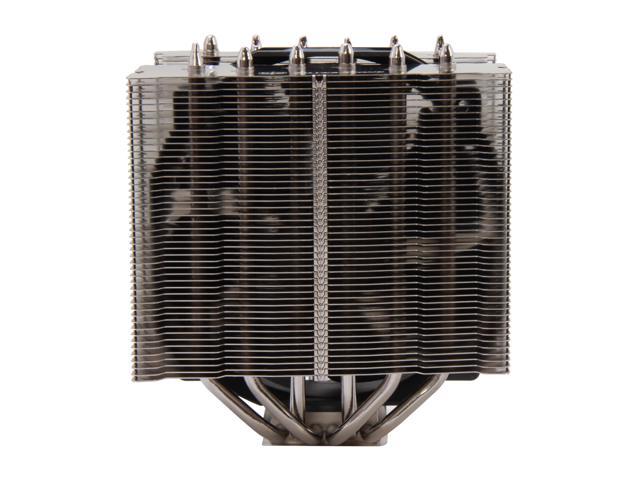 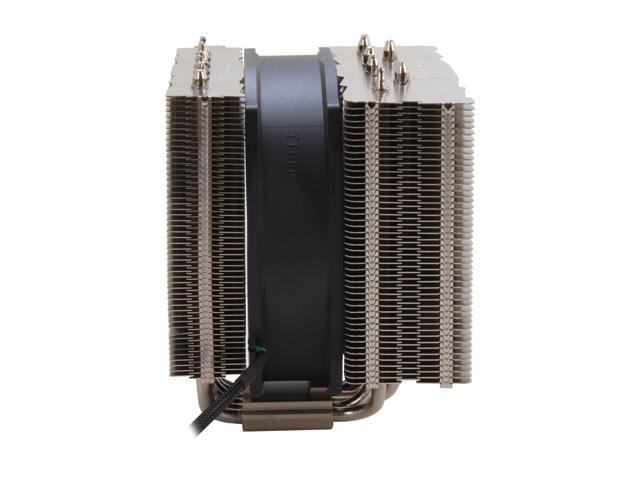 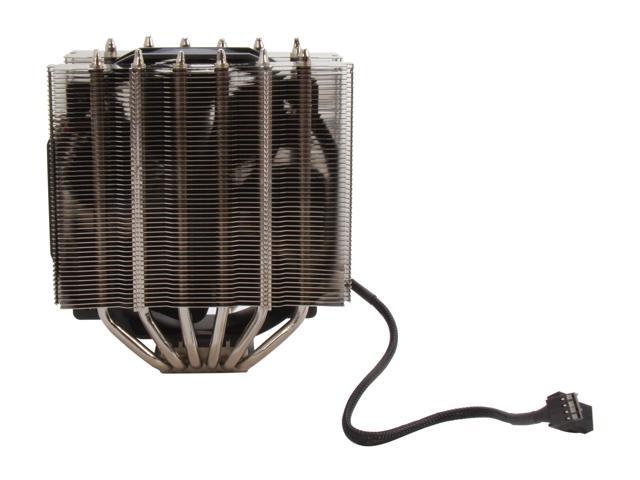 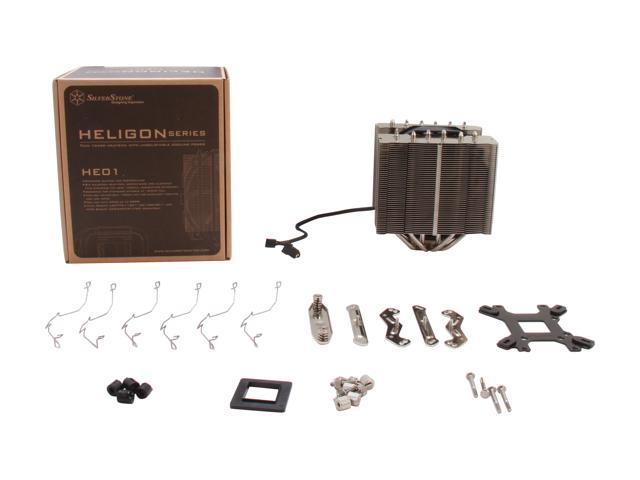 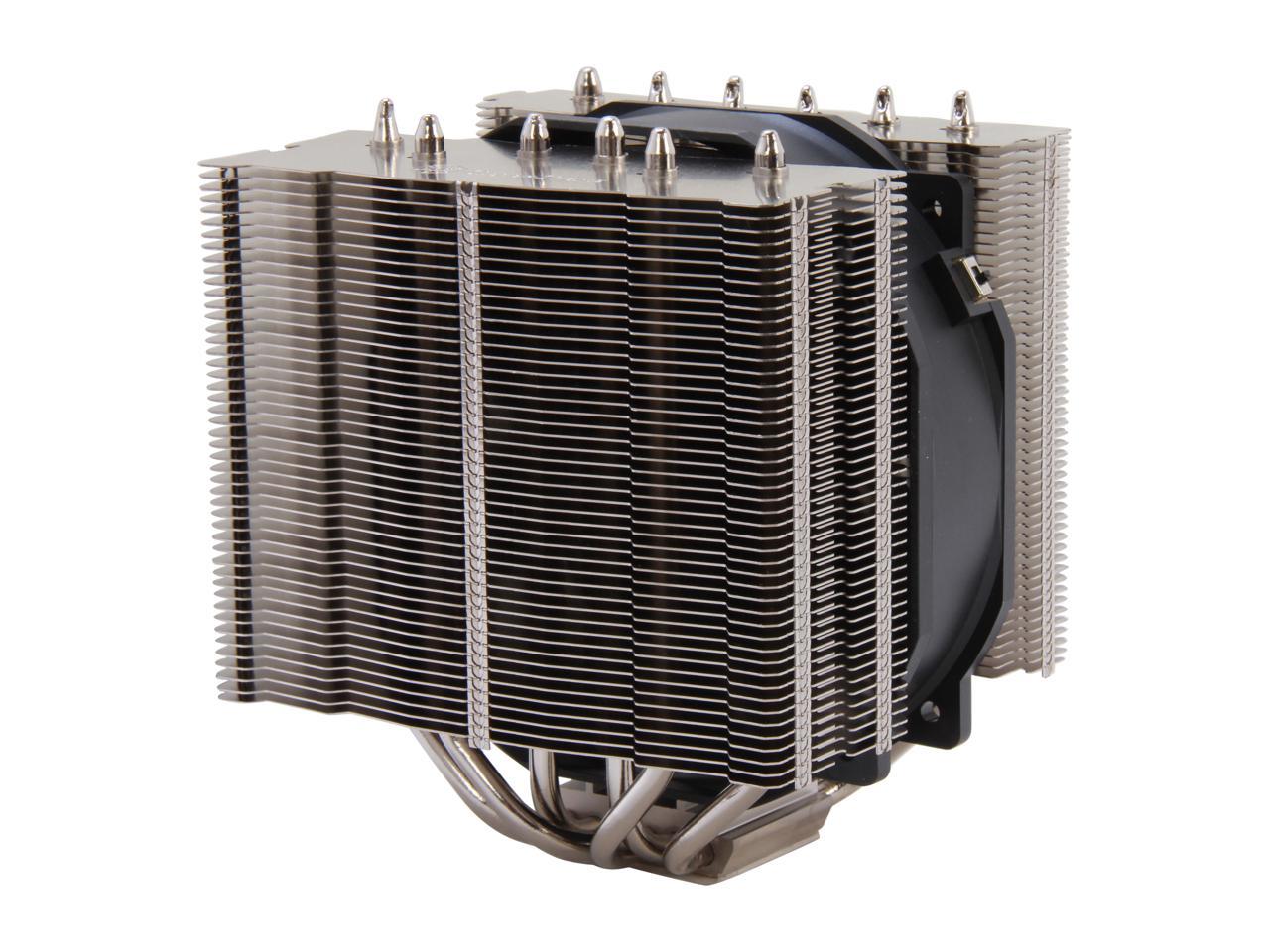 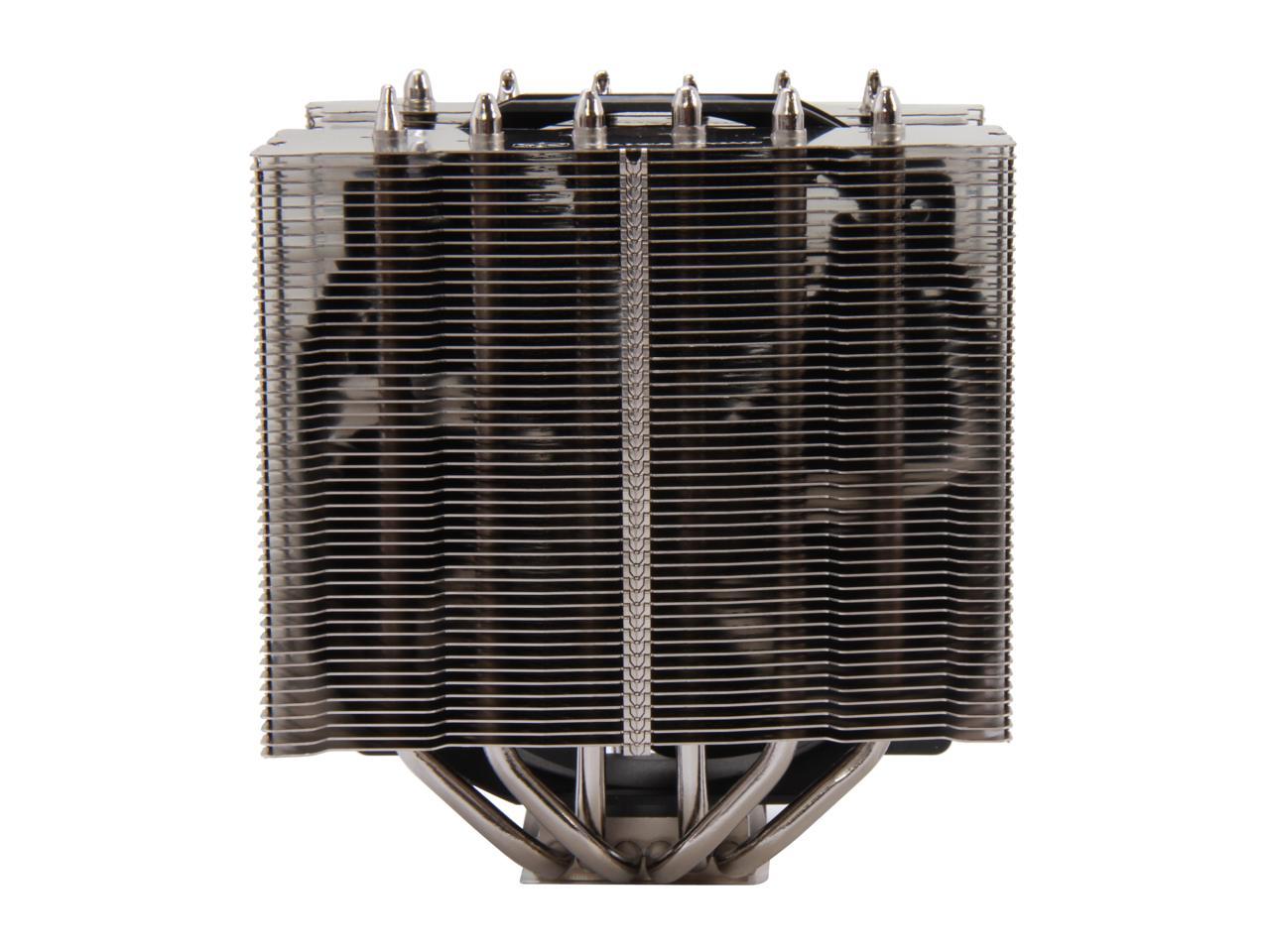 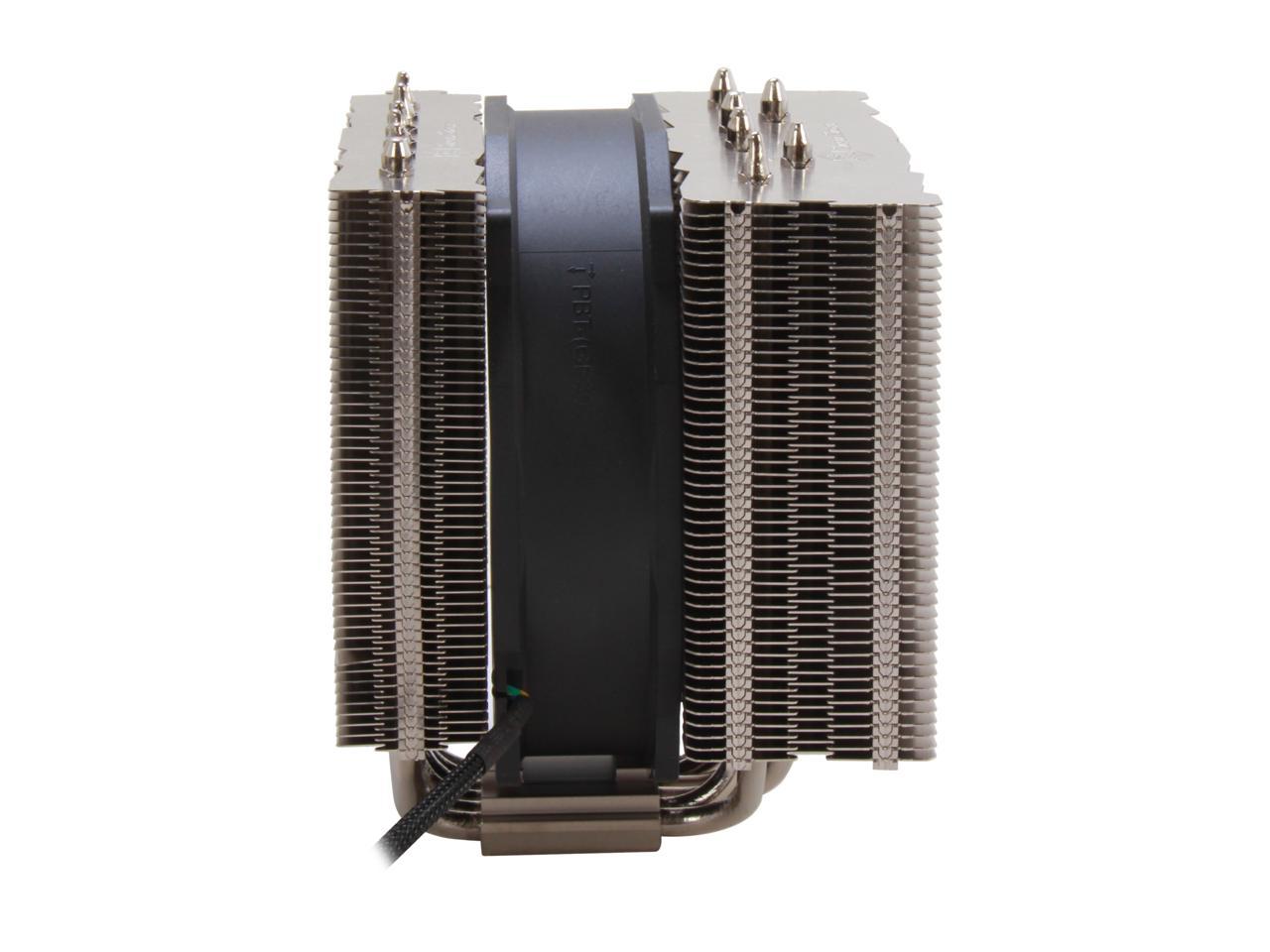 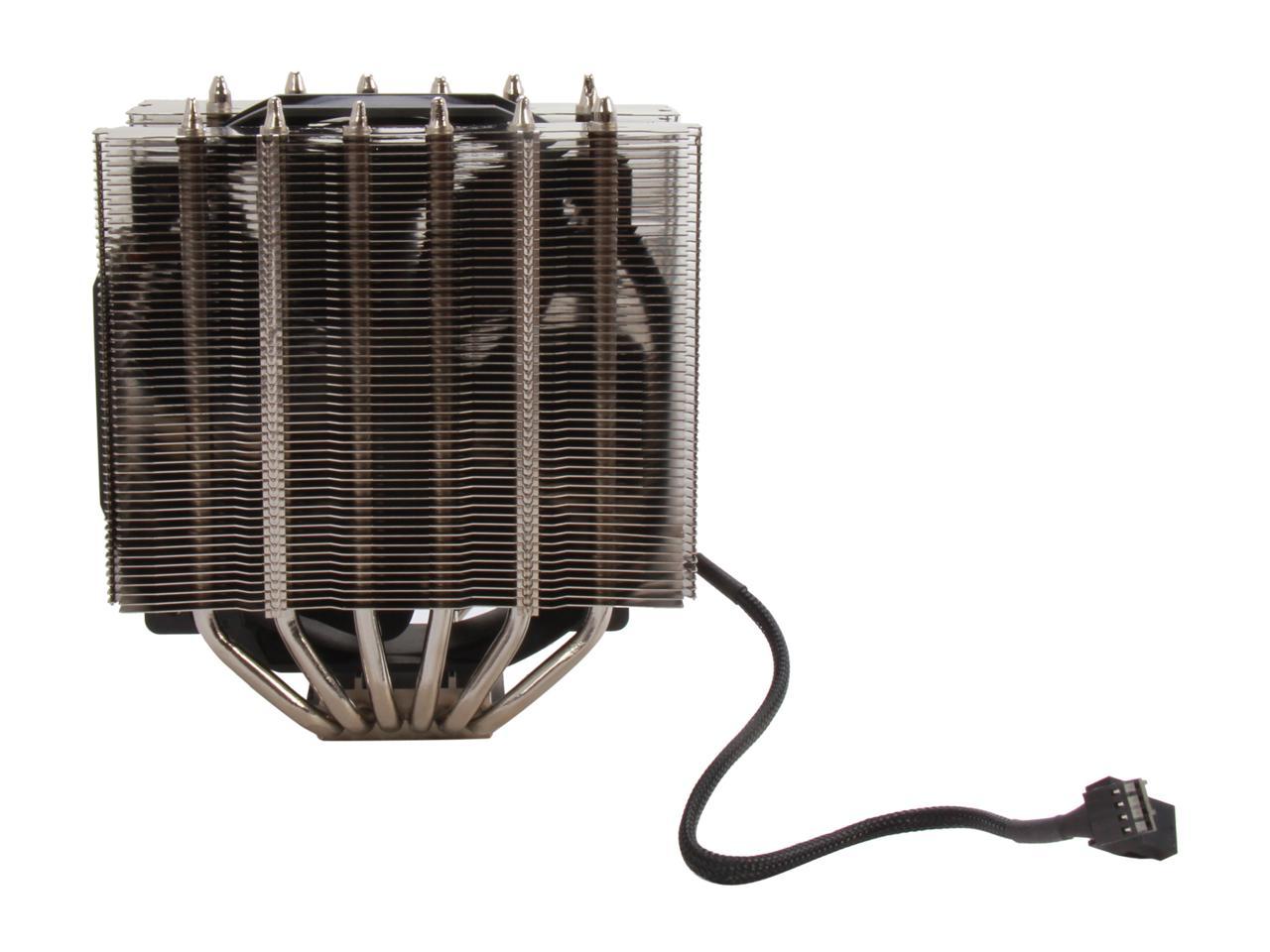 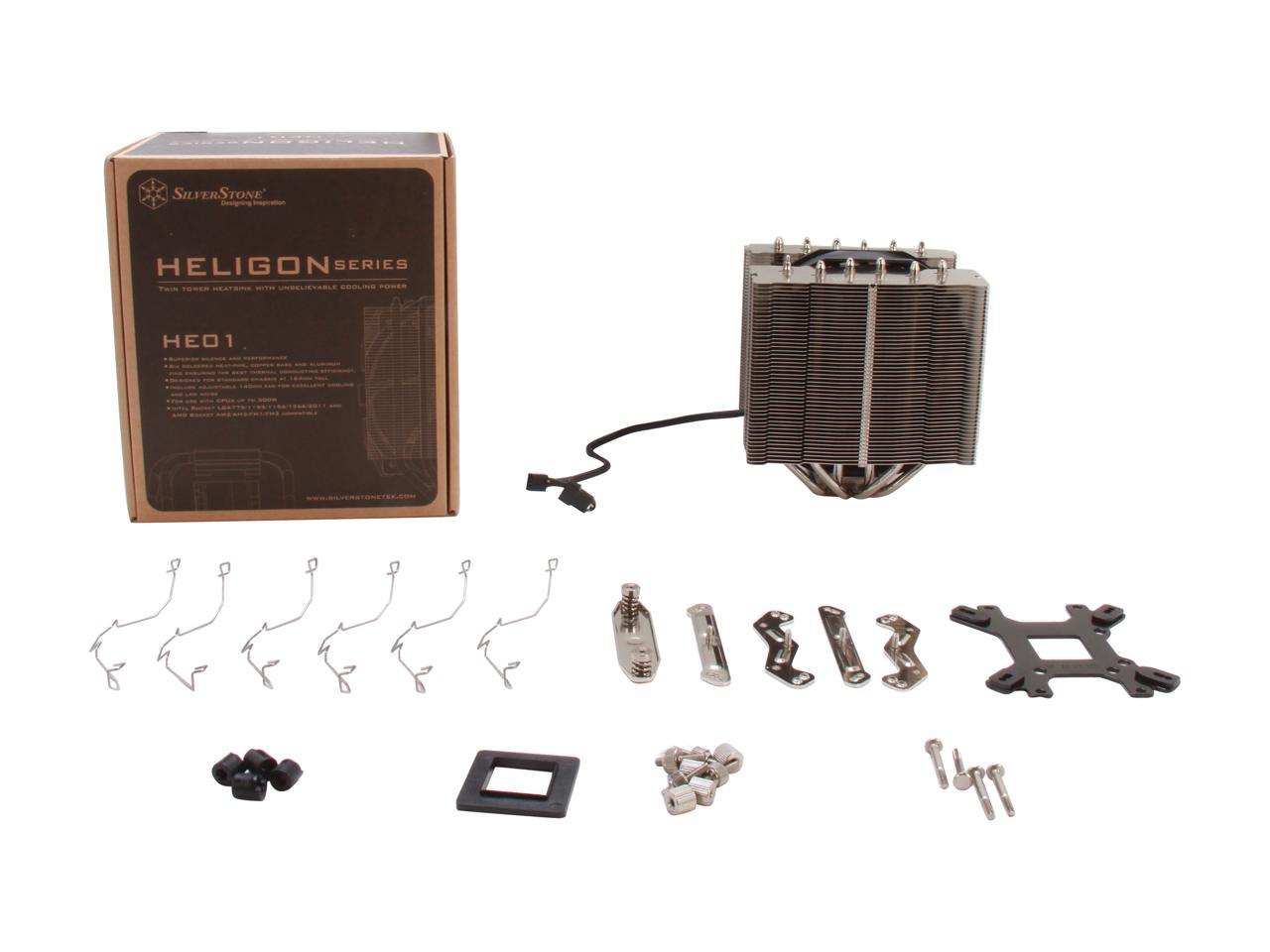 (14) Write a Review
OUT OF STOCK.
Fees for brokerage and duty included in price.
Overview
Specs
Reviews

The all new Heligon HE01 CPU cooler is designed for both performance and quietness. The wide aluminum fin spacing are specially designed to minimize noise when air travel through its heatsink. The included 140mm fan offer exceptional cooling power, this low noise fan is also adjustable allowing you to decide the right amount of airflow for your CPU. With the include fan clips, up to three 140mm fans can be installed to enable HE01 to obtain cooling performance that rival the best air coolers on the market.

The Heligon HE01 is capable of safely cooling high-end CPUs such as the Intel Core i7 3960X. It has the ability to cool CPUs up to 300W. For those looking to obtain the highest cooling performance at the lowest noise possible, the SilverStone Heligon HE01 is an unbeatable solution.

Learn more about the Silverstone HE01

Pros: I bought this HE01 last July to replace an Arctic Cooling A30 which hit the max temp of an 8350 at 4.5ghz. I did my homework and took measurements first and found this to be the best fit for my Silverstone case. This is not a big cooler as far as twin towers go. What you do not see in the pictures is that the center fan mounts very low and blows a lot of air back onto the VRM heat sink. The result is a very cool running motherboard! It is now cooling an AMD 9590 @ 5ghz just fine thank you with normal temps in the 50s and occasional spikes into the 60s when stress testing. I added a second fan and while it can get loud when over 2000 rpm it is still quieter than the water cooling I have tried.

Overall Review: These fans move some serious air and I found they work much better after removing the I/O panel and cutting out the back panel where the rear case fan mounts. A fan there actually reduces air flow and increases noise. After 9 months of all day every day use I really have no complaints.

Pros: replaced a h-80 cooler which made the dreaded grinding noise. fairly easy to install and keeps the temps in the same range as the h-80.Best thing is it's quiet even under load. Idle temps on a overclocked 3570k are 28c to 31c. Under prime95 blend 69c to 73c(one hour run) you don't have to worry about tall ram heatsinks as the cooler does not interfere with it. fits in my matx case(silverstone fortress) on a maximus v gene mobo.

Overall Review: the fan has two settings quiet and preformance.the pro setting can be a little loud but,not bad.In quiet you can barely hear it and the temps are good.(temps above are in quiet mode)

Pros: - The cooling is the most important part of a heatsink and the HE01 is excellent there. My EVO 212 would bring my phenom 960T on 6 cores 3.8ghz 1.36volts to 70+ degrees with Prime95. The HE01 peeks at 52 degrees during Prime95 at 4ghz, 1.44volts... It's a huge difference and the performance is well worth the money. - The cooler is pretty silent actually. I use Speedfan and keep it between 1200 and 1700rpm all the time. It's very silent at idle, and not very noisy at 1700rpm. By the way, I tested and there's no point going above that. It actually lowered the performance by 2 degrees reaching 54 at 2000rpm. - The mechanism to press the heatsink on the CPU, a plate held by two side screws with strong springs, is excellent. - The back plate is very solid and comes with protection for your motherboard, a nice detail. - The HE01 doesn't block my RAM which isn't very big, but it would still be blocked by other top air coolers.

Cons: The installation is messy so I removed an egg. - The instructions lack some important details in the text and/or pictures. - The instructions for AMD are wrong and tell you to build the square support bracket in a way that it prevents you from putting the heatsink on the CPU. - The support for the fans are just painful to install.

Overall Review: Well, once passed the installation, this is a top performer with a lot of RAM space, low noise and for a low cost. I highly recommend this for high overclocking.

Pros: Short story: this is a buy. I was using a 120mm CPU fan in a traditional style mounting over the CPU and was running into trouble with ambient 20C resulting in over 70C for an AMD 8 unit CPU at 3600MHz with only 3/4 of the cores 100% active (ie. 600%). Even at idle it was 32C driving unbuffered ECC ram. Replacing that unit with the Heligon (using fan, default speed) dropped my 20C case/ambient CPU temperature to 15C at idle and with 4/4 cores active (8 units, ie. 800%) and topped out at less than 41C on continuous load. That is a huge and completely unexpected improvement - and with that monster 140mm fan its quiet too. The Heligon HE01 is a very fine cooling kit.

Cons: This unit needs due care and attention to mount on the motherboard, and because of the spring clips, it can be difficult to properly install the fan in a cramped case (needs tools, light and time).

Pros: Passively cools a Xeon E3-1220 V3 (Haswell 80W LGA1150). That's right, I have completely removed the fan. It runs as a file and Remote Desktop/Terminal server for about 12 clients. Mounting brackets, hardware, and instructions were of excellent quality. The mounting process itself was straightforward and painless. Good price for the size and quality of the heatsink. It has a very good quality, quiet PWM fan as well. With the fan, the Xeon stayed 25-26°C at idle, and 50-52°C under load. No fan, it stays 25-27°C at idle, and 75-78°C under max load. Fanless, and running light to moderate daily serving tasks, it stays under 50°C.

Cons: Huge. Make sure your case can fit it. This is also one of those heatsinks that can damage motherboards if you drop the computer. Not a con as long as you don't drop your computer.

Overall Review: This monstrosity allowed me to build a completely solid state(no moving parts at all) server that is extremely fast, completely silent, and should run for years. For it to work fanless, it is mounted so that the heat pipes are horizontal, one row over the other. To put it another way, the fan would be blowing straight up at the PSU in the tower case. Convection does all the work. I can feel the heated air rising off the heatsink. It would also make a great HTPC cooler, since you could in theory run the fan at 0 or minimum-stall RPM's when doing most normal HTPC tasks.

Pros: IT'S HUUUGE. Keeps my CPU nice and cool. 3570K @ 4.5GHz doesn't go higher than 41°C under load for a few hours. Clear directions, comes with everything you need for your Intel or AMD CPUs. Installation took a while but it was worth it in the end. I chose this HS/F for it design. I didn't want to be limited on RAM heatsink selection. This cooler has no overhang above the DIMMS so I can install RAM with the craziest heatsinks without removing the cooler.

Cons: IT'S HUUUGE. Make sure you plug in any and all motherboard accessories BEFORE installing this cooler, cause you're not gonna have a lot of room to move your hands around should you need to unplug something....especially if you have big hands. My Asus P8Z77-V has a Wifi addon card that fits in between the USB ports on the I/O panel. There's no way i'm getting that thing in without breaking something or severely bending some pins so it looks like the whole motherboard will have to come out. But this isn't the cooler's fault, it was mine cause I was in such a rush to see this thing in action ;)

Overall Review: This is the only cooler that will touch my new 3570K. I tossed the stock cooler aside so I can't really compare the difference between stock and the HE01. But if you're building a system and are looking to OC i'd definitely recommend this cooler.

Pros: Update - This is my second one, and this one is great! RMA process was painless. This cooler, especially for air, is very quiet, even on the high rpm mode for the fan. As far as cooling power, it will do. It's keeping my 3930k below 45C during the hardest things i'll ever put the computer through so that's good enough for me. I notice people getting much better results with what sounds like Ivy Bridge procs, just know that even for Sandy-E it can cool enough to game on. Installation was smooth, however the first time i put it on, seemed I did not apply the correct amount of thermal grease, only guessed this because my temps were not good and I didn't want to blame the cooler before myself. Anyway, took it off easy enough, cleaned it, AND had enough grease left from the box to try again (awesome) and just like that, my temps dropped. Last but not least, the fact that this cooler can fit into darn near any case as long as the builder is being realistic, is great. I don't like having to up to an ATX Full tower just because i need to have an air cooler for my LGA 2011 proc. The fan that comes with this cooler is actually turning out to be a very nice fan. I though about getting a different one from maybe a more popular company but no need. Also, very easy to mount a second fan onto the cooler if you have the room.

Cons: The cooling power for 3930k is not exactly amazing. The fins on the unit I got are a little loose, not sure if all are like this or not. And this is the second, both of which were built about the same.

Overall Review: The fact that the fins are open on all sides means if you make the fan it comes with push through the bigger block of fins towards the back and right into the exhaust fan, I was able to use the top 120mm fan of my case closer to the front of the 2 (back top 120mm fan is also blowing out of the case) blow directly down on the smaller block of fins allowing the fan from the cooler to always be pulling from a very cold stack of fins and thus ended up lowering my temps even more without having to mount another fan directly to the cooler. I chose this method because whichever side you mount a second fan to the cooler, you will always be covering up something important. On my build specifically I would be covering up RAM on either side.