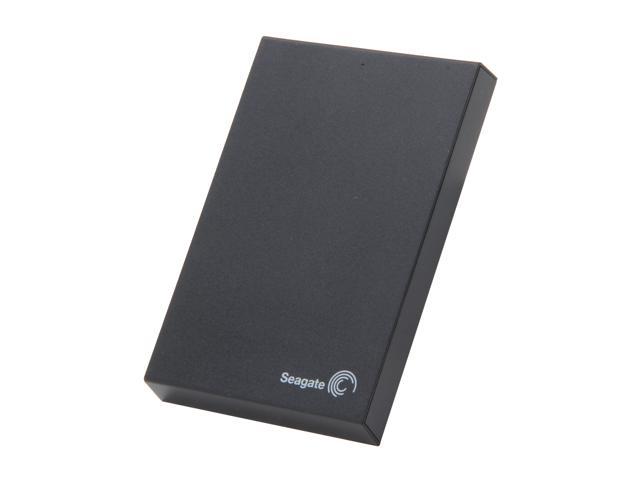 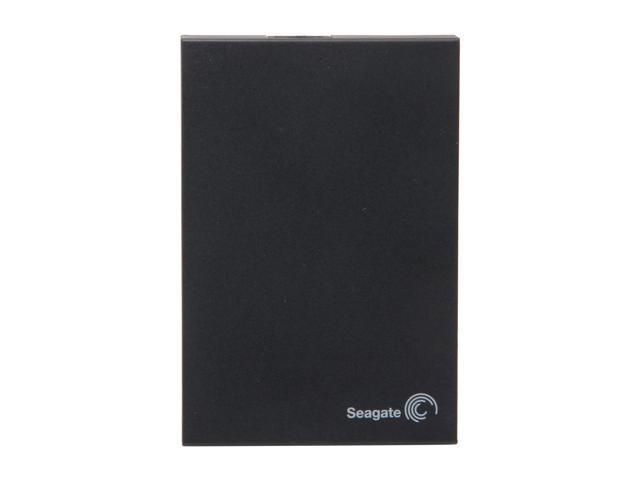 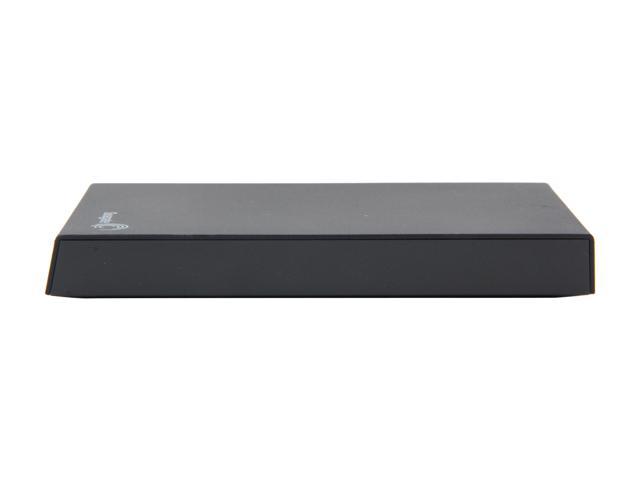 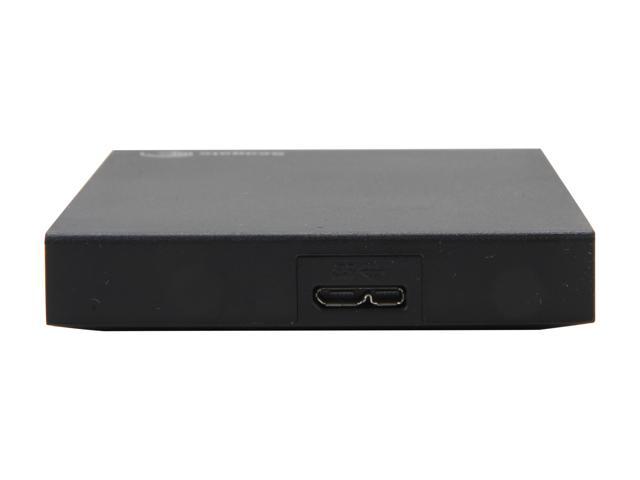 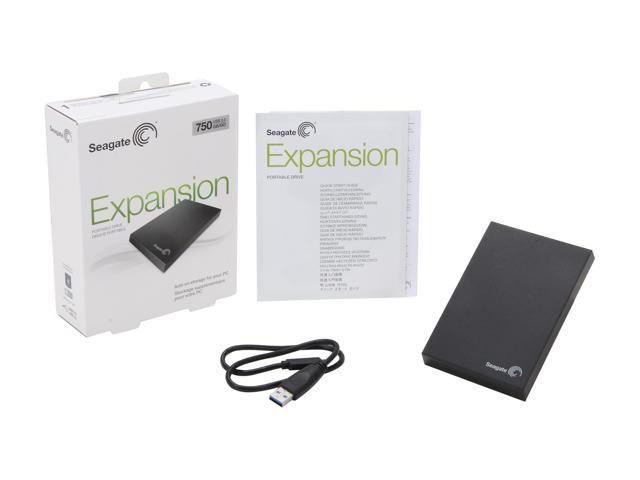 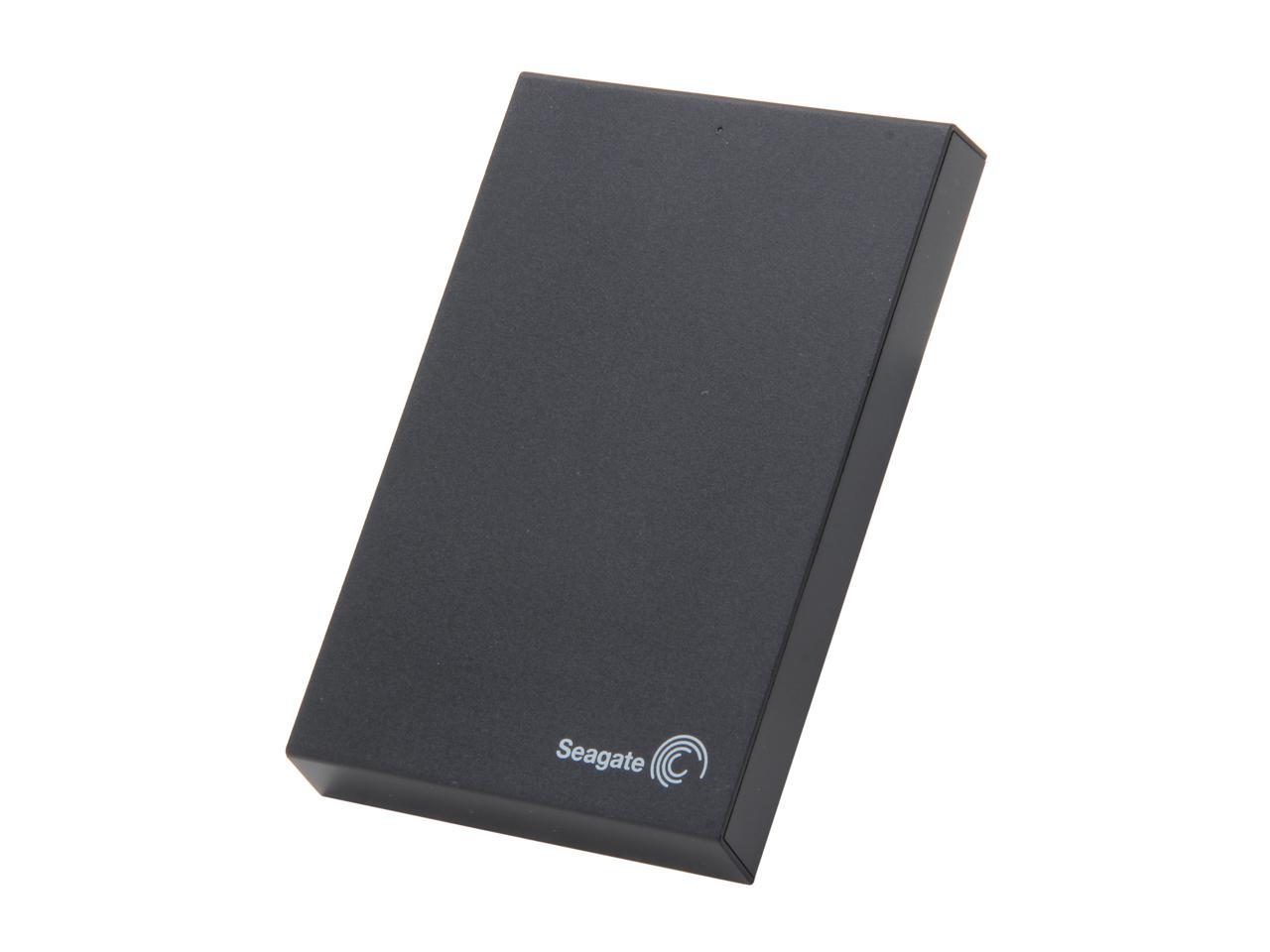 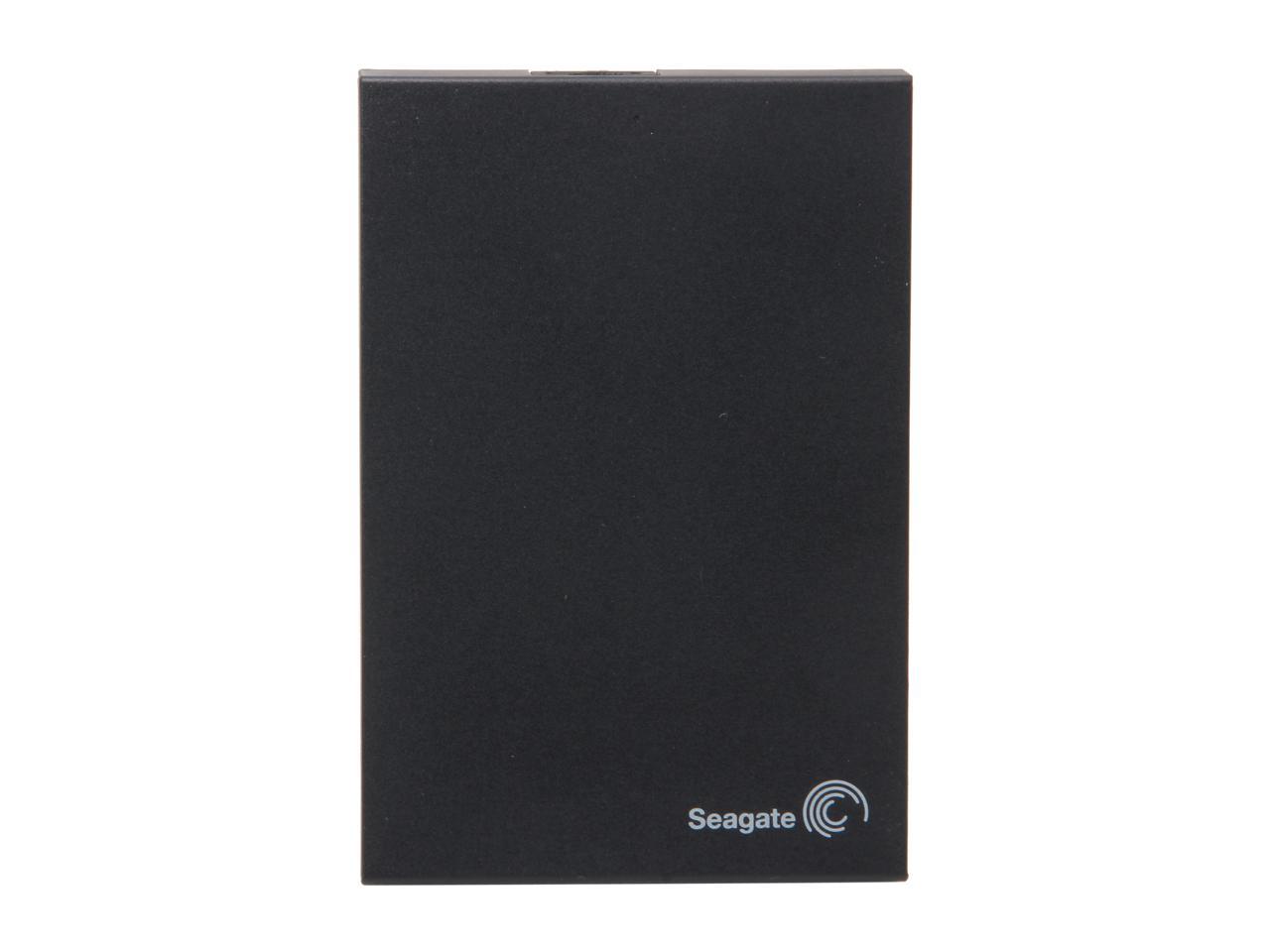 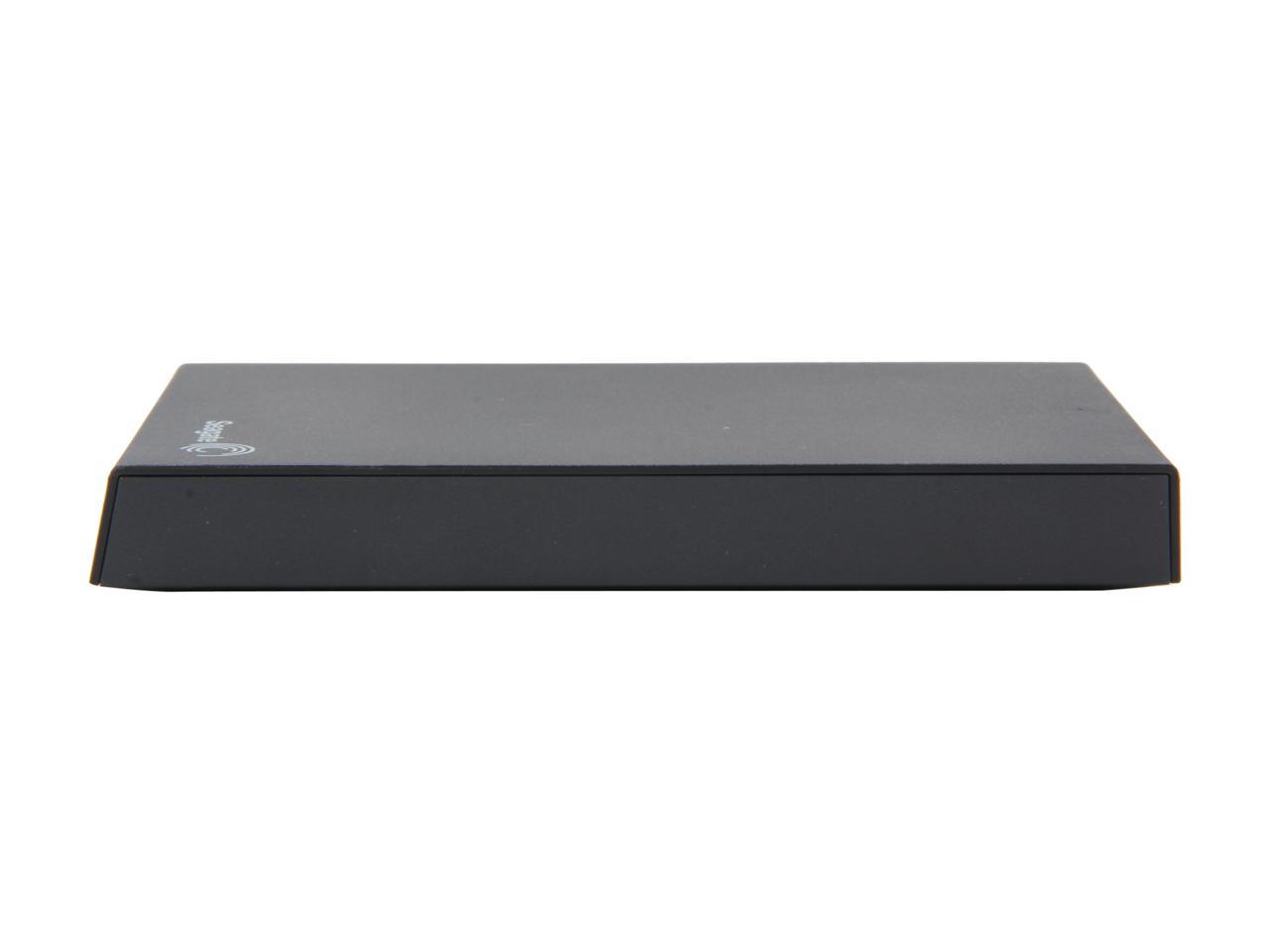 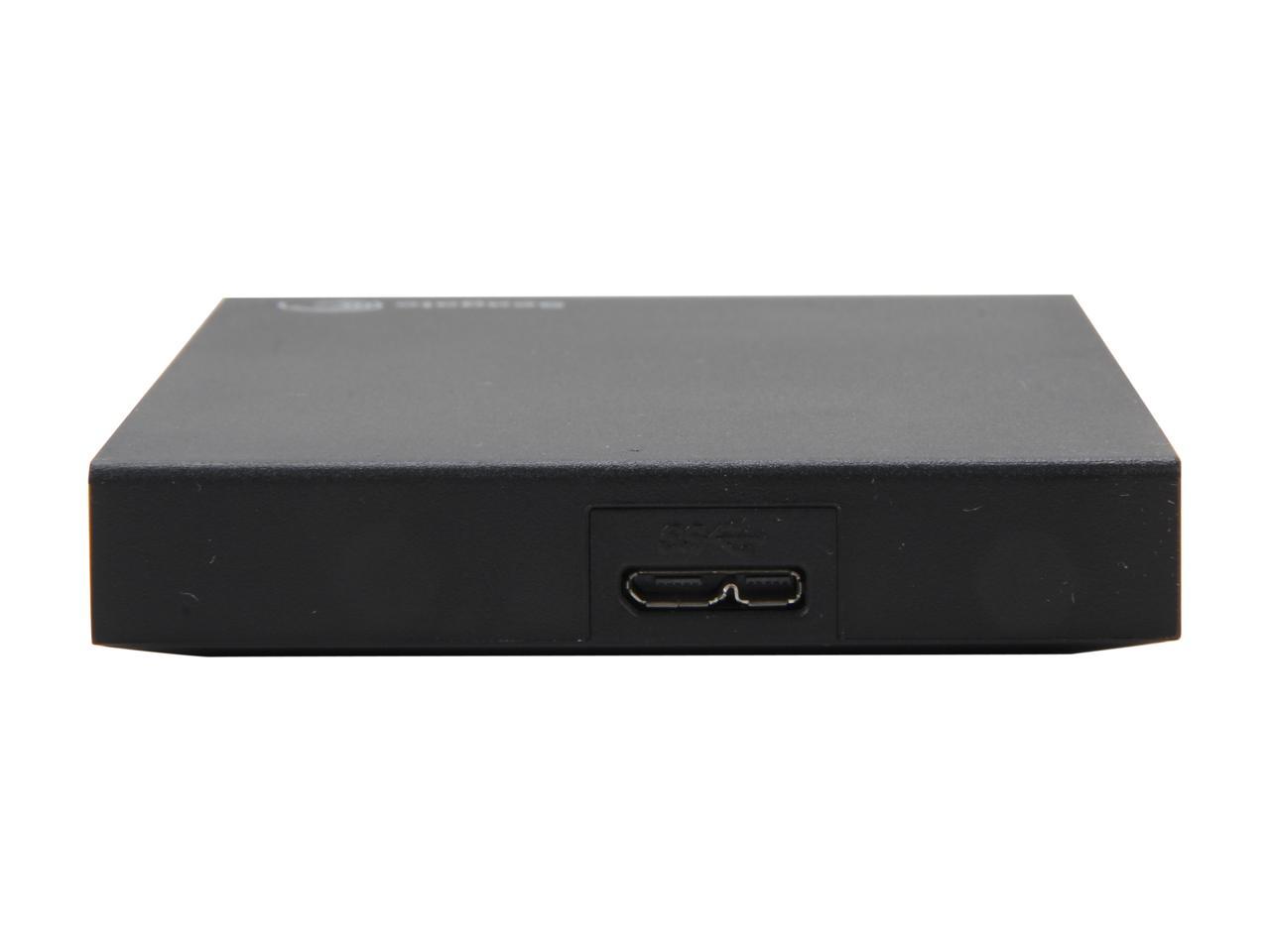 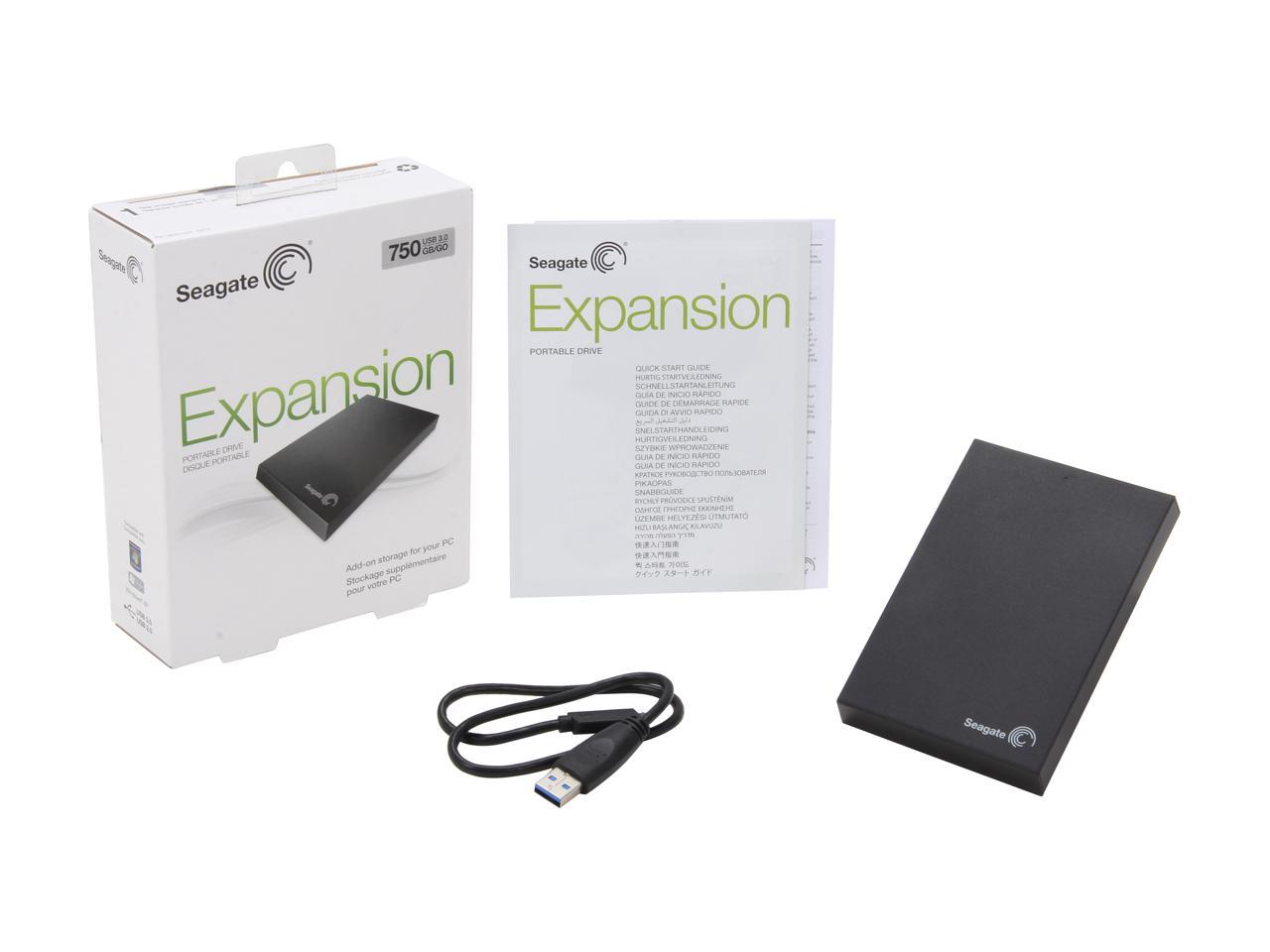 Learn more about the Seagate STBX750100

Cons: A Large alotment of small files transfer at about 55mbps (but any other drive would slow down the same as well)

Overall Review: 1. I tested this drive on a Dell Vostro 470 and a Custom Built AMD A8 APU, both PC's transferred a 10gb Alotment of files (One 4.7gb ISO and Hundreds of 5mb MP3's) in about 10minutes!!! 2. I have swapped out all the Hard Drives in my PC's to SSD's, so this makes for a great option for storage on ALL my PC's!!!

4 out of 4 people found this review helpful. Did you?
Zacchari G.
Ownership: 1 week to 1 month

Pros: This is the first external hard drive I've owned, and it's been a wonderful experience. The case is practically perfect. Slim, black, matte, and no fingerprints show. Feels sturdy enough to drop without worrying about the drive. There's one small, blue activity light - lets you know when its connected and in-use. The drive is extremely quiet: I can only hear it with my ear right next to it. Stays fairly cool, even under heavy usage. What really struck me was how fast this drive is. It outperforms my High-Speed USB 2.0 Flash Drive (Corsair Flash Voyager) by 75% on USB 2.0, and 250% USB 3.0. And last, but not least, this drive is really easy to use on Windows. Acts like a flash drive, connecting without the need for software or drivers. Plug-and-play.

Cons: Though the product description says Mac OSX is supported, the drive comes formatted with the Windows NT file system, which is NOT compatible with OSX. To make it compatible, I created a partition (200GB) just for my Mac, using the "Mac OS Journaled" file system. Then I formatted the rest with FAT32, which works with both Windows and Mac. (NOTE: If you plan on using the drive solely with Windows, you don't need to worry about reformatting or partitioning. The drive works out-of-the-box with no issues.)

Overall Review: The list price of $110 is a little high, considering it is only 750GBs. The USB 3.0 cable is detachable and replaceable. And partitioning is a great way to take advantage of the space for multiple uses. So far, I've used this Expansion Drive with a Mac TimeMachine backup, sync'd with my Windows 7 files, transferred files between Windows computers (and between Mac and Windows), and connected it to my wireless router as a network drive. This little drive has taken everything without flinching.

4 out of 4 people found this review helpful. Did you?
Zachary P.
Ownership: 1 week to 1 month

Cons: USB cord is only 1 ½ feet, so in some situations it may be a bit of a stretch.

Overall Review: Pics made this look like it was metal, but it is plastic. Not a con as it is light weight, and seems sturdy / durable.

1 out of 1 people found this review helpful. Did you?
Rauel C.
Ownership: 1 day to 1 week

Pros: It's cavernous and very fast. Not only for an external, but for a hard drive. 750GB is a very nice amount of space to store movies, music, books and games. Tested a few very large files such as 720p and 1080p movies and some large image files and this drive was scarily fast in how quickly it transferred them between my two machines. For example, I copied a 1GB video over to this drive in 7 seconds. Bear in mind, this requires that your computer has a USB 3.0 Port (they are blue) to take advantage of the speeds. This drive is so fast I ended up setting it up as permanent external for my media PC and moved some Games over to it. Seems to run games off of it as if it were a standard internal hard drive. I would also see this drive being very useful for a Laptop or similarly internal space limited machine. It's also very quite and seems to run cool. I found this better than a eSATA because the speeds appear to be comparable, but this drive only requires the USB cable which alleviates worry about both a power and data cable. Also the notification light on this isn't blinding, so it reasonable to use this in a dark/dim room.

Cons: The pictures made the casing look metallic, but it's just really nice plastic. This is really the only con I could think of because metal seems to help dissipate heat better than plastic, but this drive doesn't get hot anyway.

Overall Review: This drive was a life saver for me. I was running out of space on my Media PC's 1TB hard drive for Steam Games, and had to start uninstalling stuff. Tested this drive on my desktop and found it to be very fast. Convinced me to try to move some of my games over to this and see how installing games on this external worked as USB 2.0 was too slow and eSATA too cumbersome. To my surprise it works fantastically, and ended up moving more games over. If I had a laptop with USB 3.0 this would be a great way of expanding instalable storage for games. Since this is so simple with it's single cable not to mention how fast the drive itself it and the lightening quick USB 3.0 connection helps take this over the top.

1 out of 1 people found this review helpful. Did you?
Tristan R.
Ownership: 1 week to 1 month

Pros: Great USB 3.0 Speeds. CrystalDiskMark shows a sequential score of 121.2 MB/s Read, 120.7 MB/s Write. At those speeds this drive is the fastest USB 3.0 external hard drive I own. Roughly 8-10 MB/s faster than my WD & Silicon Power 1TB USB 3.0 Drives. Real world testing transferring a 3.6GB ISO file took approx 42 seconds which is about 2 seconds faster than the aforementioned drives. No bloatware. Only comes with simple program to register drive online & has Serial Number & drive information already filled out in an xml file so you don't have to go looking for any info. Sleek black finish, low profile Blue LED that flashed when drive is reading/writing information. Cord feels snug when attached, something I've had problems with on other drives.

Cons: Warranty is short compared to other competing brands. However I should note that the Hard Drive is actually a Samsung drive & so far my other Samsung drives have yet to give me problems. I've owned dozens of HDDs throughout the years & had every brand (WD, Seagate, Maxtor, Hitachi, Iomega, Toshiba, nobody is perfect) die on me or had to RMA them. My 3.5" Samsung drive has yet to give me problems after 2+ yrs of daily use ownership. Blue LED activity indicator is just a little too bright for me. I like low profile lights & this one is very small but bright, it can be annoying if it's sitting next to you in a dark room & you're constantly accessing it. Case is made of cheaper plastic construction. Tapping on the side of the case it feels as though there is open space inside the case which makes me question if they could have made the drive slightly smaller.

Overall Review: I would probably spend the little extra money & get a 1TB drive, but that's just me. If you're in the market specifically for a 750GB drive (or similar size) then this drive is excellent. Seagate has a good RMA process & with the Samsung drive behind the curtain you're arguably getting the most reliable brand of HDD available right now.

1 out of 1 people found this review helpful. Did you?
Kenneth R.
Ownership: 1 day to 1 week

1 out of 1 people found this review helpful. Did you?
Michael B.
Ownership: 1 day to 1 week

Cons: 1. One year warranty (WD is two years, Toshiba is three years). Its incredibly easy to register the drive using the (small) software packaged on the disk. You just enter your name and email address it fills in the drive serial number (a positive). However with WD you can view every drive you have registered on their web page, when the warranty expires, links to software and manuals, etc. I could not find this on the web for Seagate. 2. No backup software included on the disk. I put this as a con, but I wouldn't use the software if it were included. I prefer to just "drag and drop" my files since I own multiple external drives from different vendors (both 2.5" and 3.5"). 3. USB Cable length is short (18" including the connectors) but the same length as WD and Toshiba. Seagate's cable is lighter (thinner wire) than WD. Slightly more portable, but higher gauge wire than WD.

Overall Review: The most important aspect of any hard drive is longevity (reliability and life span). I now own four 2.5" external drives. None have fail yet (but its been less than two years). I've never had a 2.5" laptop drive fail (but know people who have). Over the years (dating back to the 1980s) I've owned at least fifty 3.5" hard drives. Three of them failed (one Seagate, one Maxtor, and one WD). All were after years of use. The WD was still under warranty (three years into a five year warranty). WD promptly replaced the drive for free (minus postage). I also received one DOA Hitachi drive (NewEgg promptly issued an RMA, you have to love NewEgg's customer service). The key is to backup your data (keep multiple copies on different hardware).

1 out of 1 people found this review helpful. Did you?
Leonard A.
Ownership: 1 week to 1 month

Pros: This is a small, power efficient, USB 3.0 portable drive from a firm with a good track record for quality. It is among the least expensive of units with its same features. It is light, elegant, very well constructed, and quite convenient to use. It is small enough to fit in your pocket or laptop bag, and has enough capacity to backup most laptops and hold other data you might need in the field. Like other drives of this type, it is powered directly from the USB port without a separate power supply plugged into the wall. It is cool and quiet and works both on new USB 3.0 ports, and older USB 2.0 ones as well. Naturally, it only works at its full speed on USB 3.0. For personal use, or for small scale professional use, this may be just the drive you need.

Cons: For its class, it has no real drawbacks. It could have more capacity, but this would demand a higher price or a larger unit. 1 TB is the largest capacity you can get now in this exact size drive. This unit is almost there at 750 GB. This drive is marketed as an “Expansion” unit suggesting that its speed is equivalent to another drive inside your desktop or laptop system. On USB 3.0, this is mostly true, unless you have a much more costly faster setup in your system. Most people using common machines, especially laptops, would not notice any, or very much difference. Portability and convenience are what you are looking for here. There is no bundled backup or utility software with this drive. This is not really a “con” because these are usually not particularly great, or can be found elsewhere free anyway.

Overall Review: There are many drives essentially similar to this one available. As an entry-level solution, this unit beckons because of its price and the reputation of its maker. Unlike some vendors who buy any old drive and put it in a pretty enclosure, Seagate actually makes the drive itself. When I have had a problem with one of their units in the past, they took care of it quickly. Both my experience with Seagate and the good construction of this drive inspire confidence.