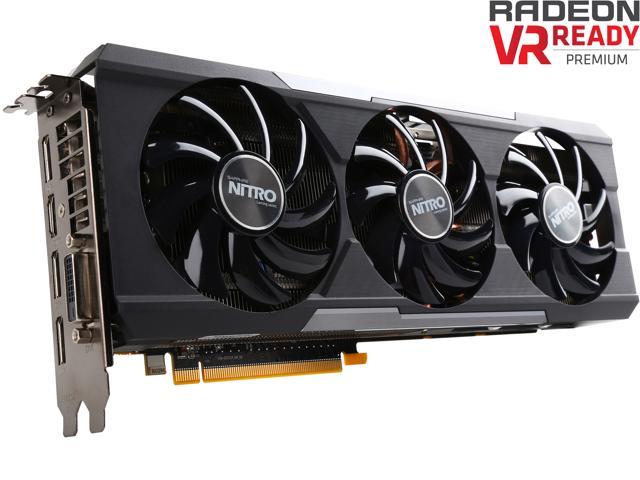 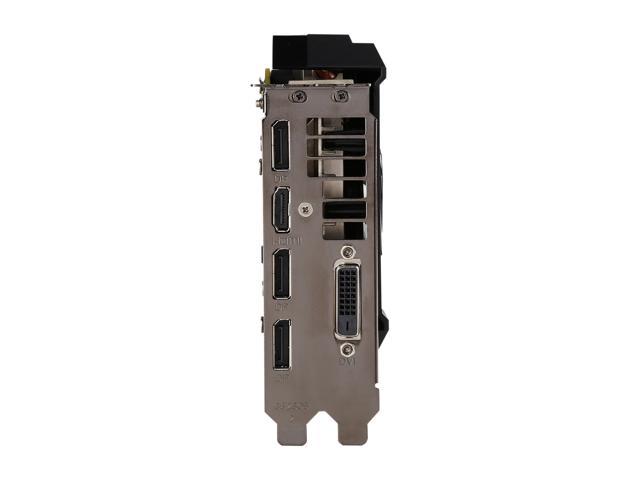 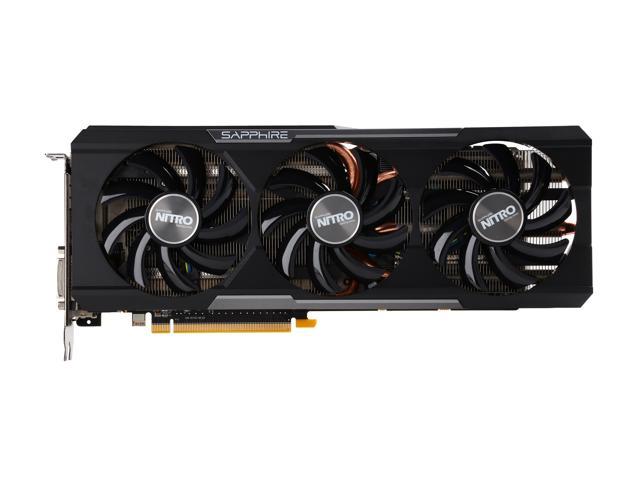 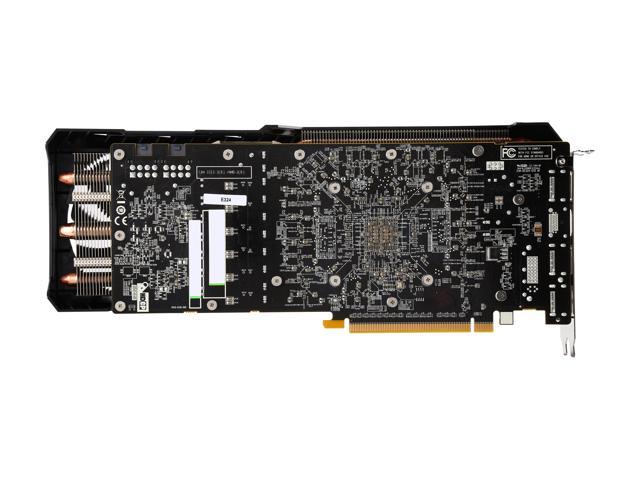 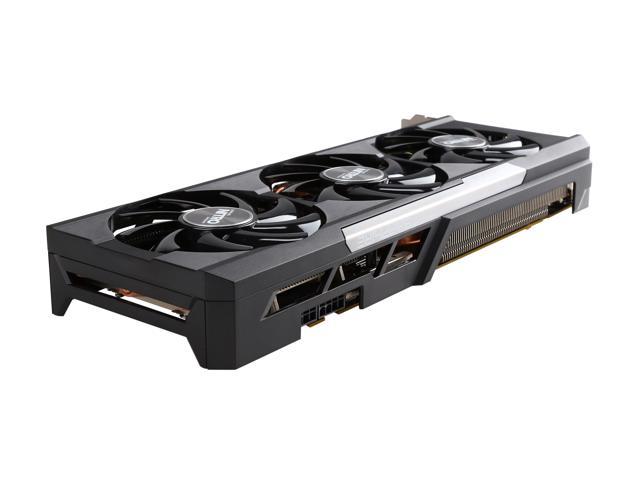 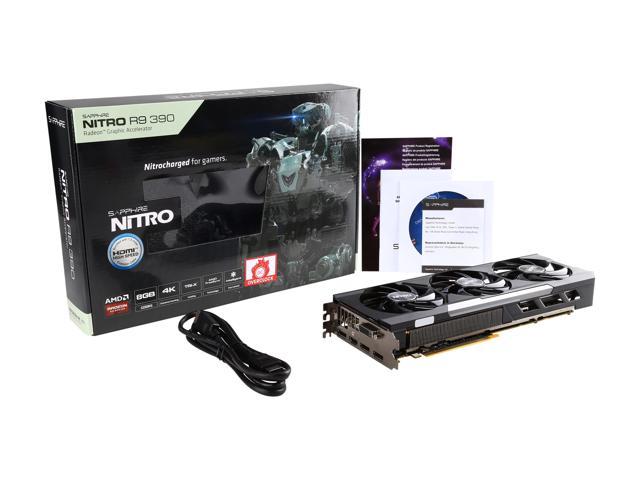 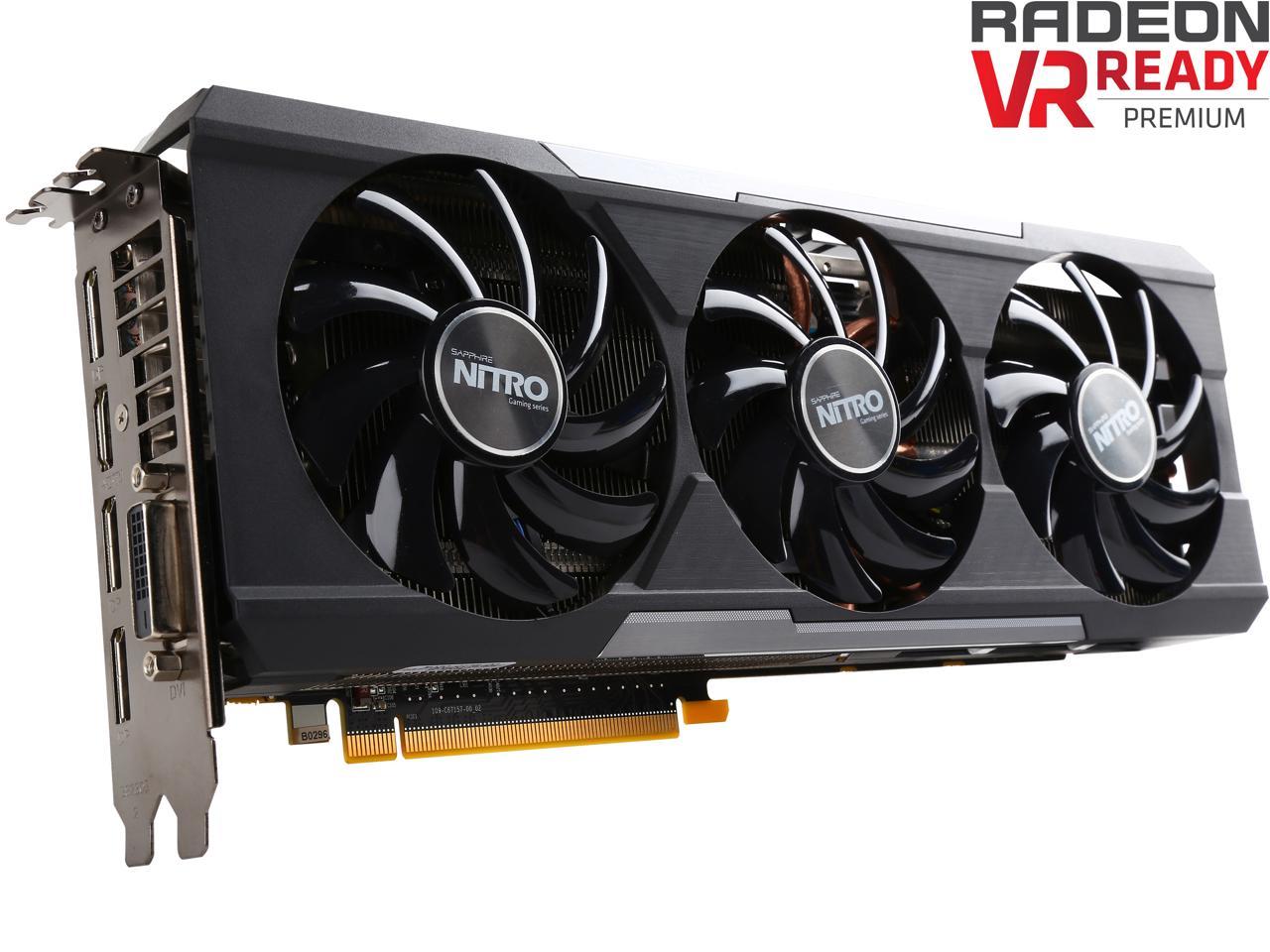 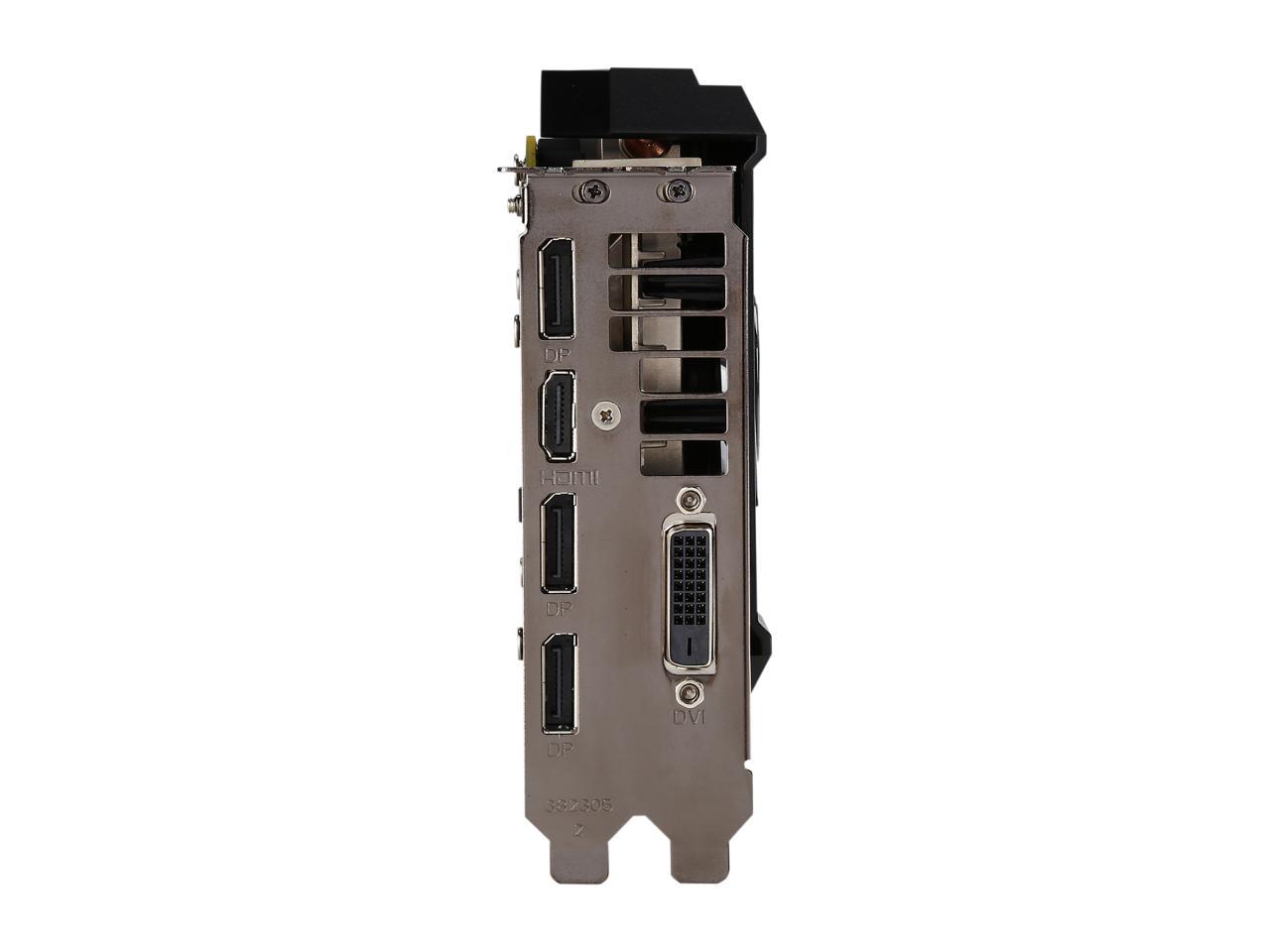 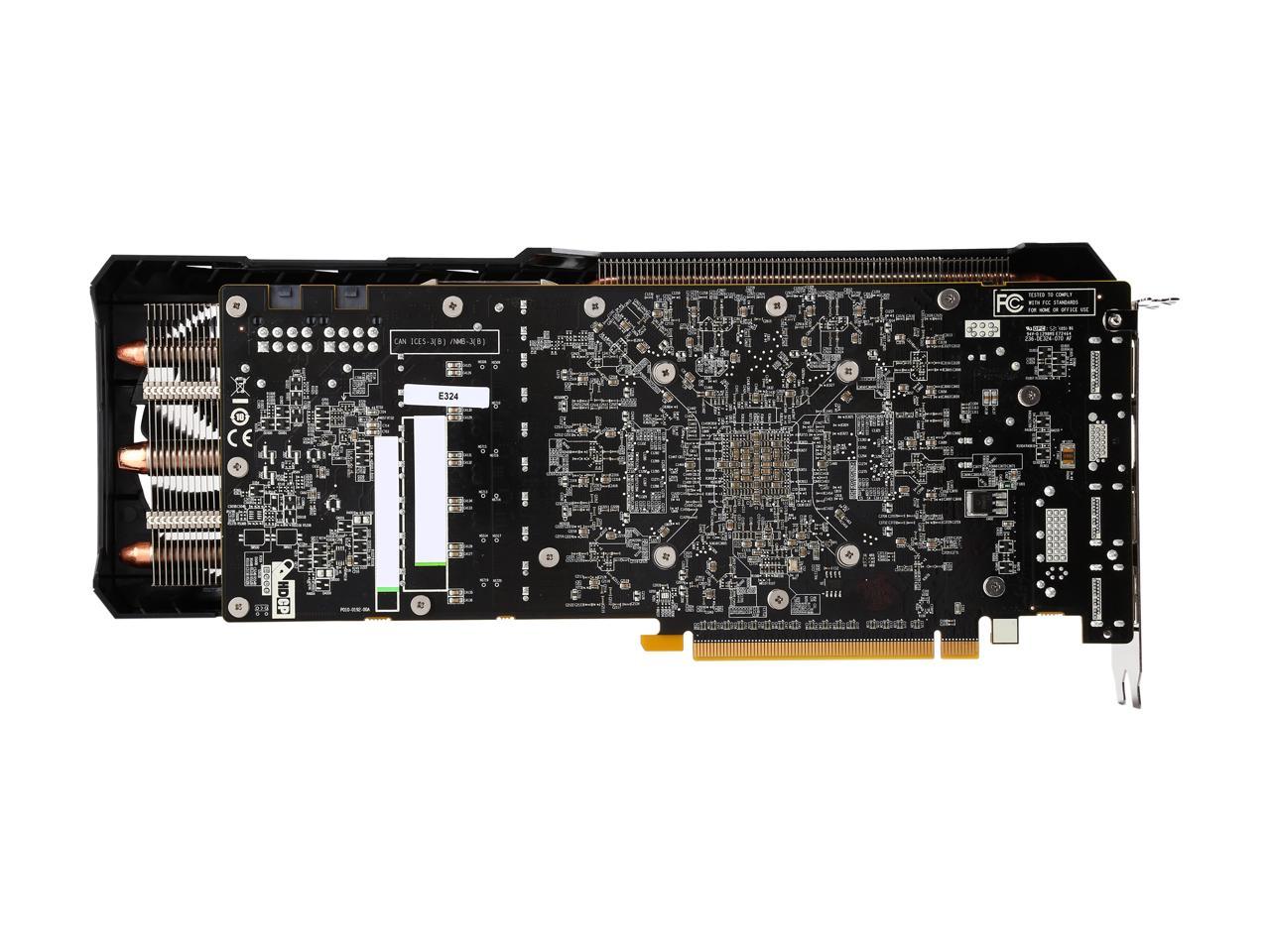 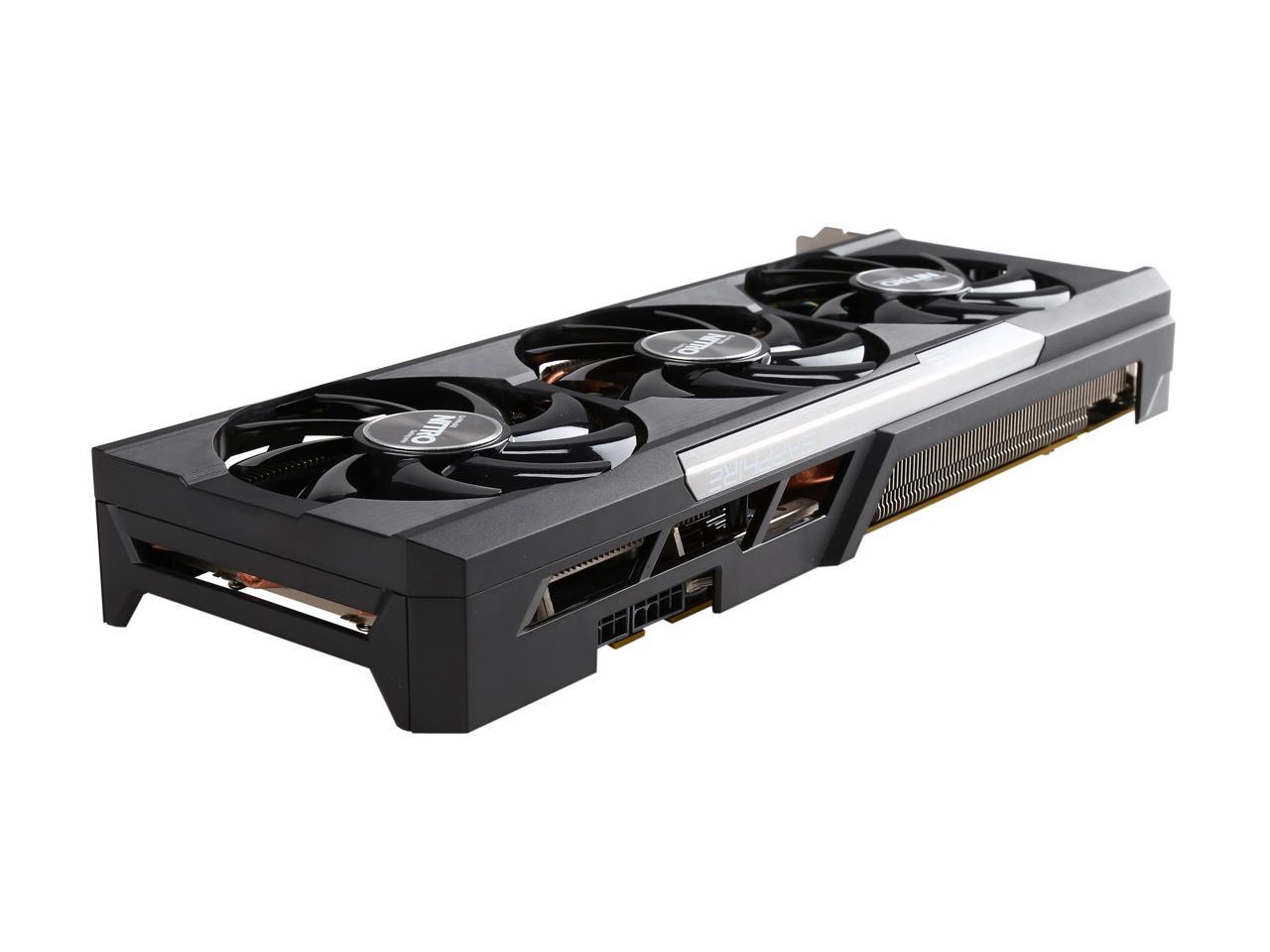 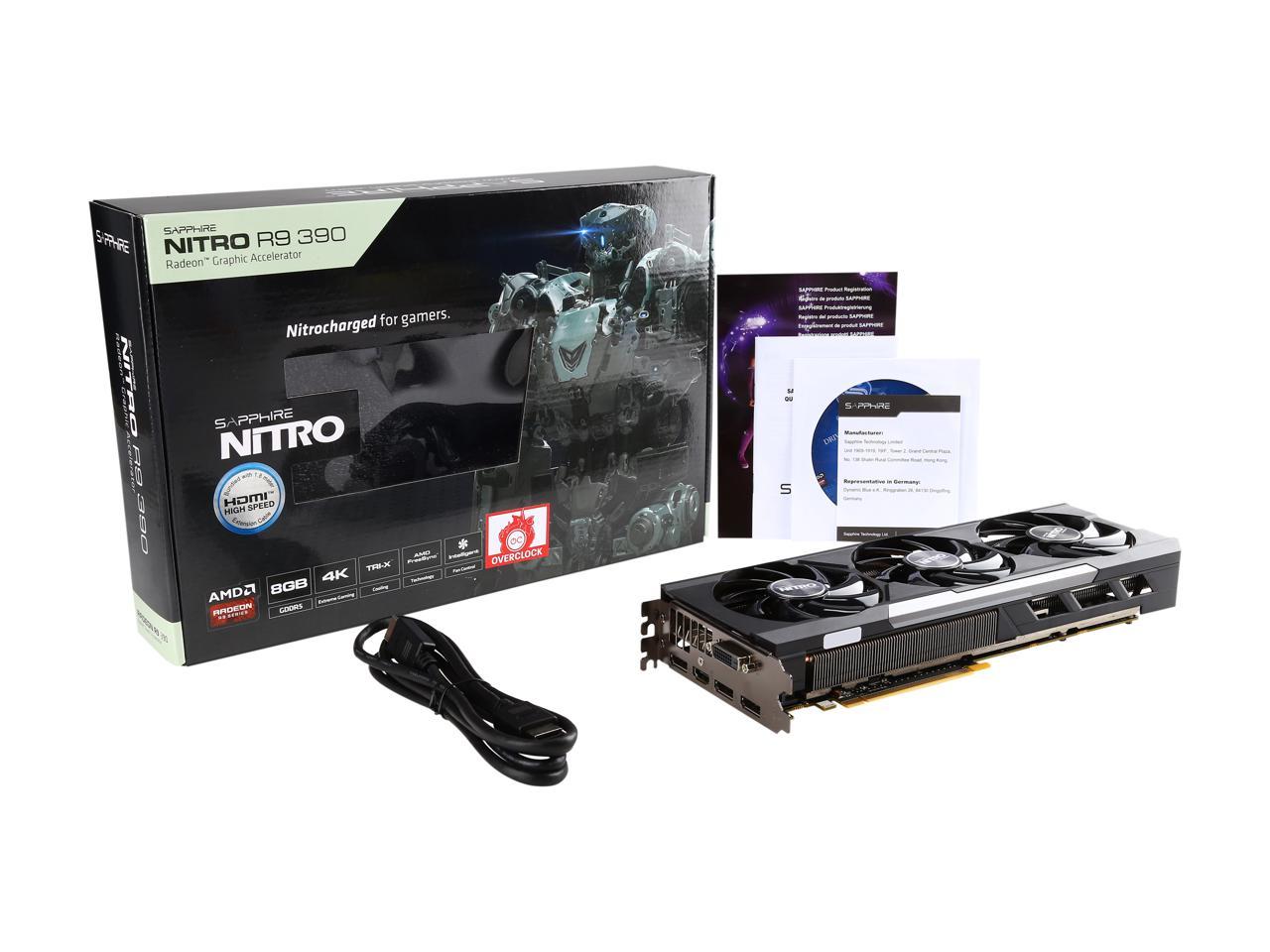 (30) Write a Review
OUT OF STOCK.
Fees for brokerage and duty included in price.
Overview
Specs
Reviews

This SAPPHIRE card boasts a range of features previously reserved for high-end cards, including long-life capacitors and award-winning Black Diamond Chokes, as well as the award-winning cooling solutions. Its sleek, elegant contours can fit any build and adds an aggressive look to your gaming rig.

Pros: -Stays quite cool at around 66 degrees when stress testing. -Played witcher 3 and battlefield 4 on ultra @ 1080p for a few hours without crashing. -Very quiet even with the fans cranking at 50% -Looks freaking awesome (5 eggs for that alone).

Cons: -I look at the specifications, I got out a ruler, I measured the extent to which my case would fit such a behemoth, and I knew for a fact it was not going to fit in my case no matter how I shuffled the drive bays around... Bought it anyways. A pair of tin snips fixed that problem handsomely. -It also weighs a lot. But the way I cosmetically modified my case resulted in a built in "support system" now. -Really interesting, and according to the internet, common problem during installation (see other thoughts).

Overall Review: Disclaimer: I lay no claims to the accuracy or the helpfulness of the following message. BLACK/BLANK SCREEN AFTER THE WINDOWS LOGO ANIMATION AFTER HAVING INSTALLED THE LATEST DRIVERS (15.15 as of time of writing)). -THE PROBLEM: I had a bit of an issue while installing. After a fresh install of windows 7 64bit, I installed the drivers, rebooted, and after the windows logo does it's little animation thing while it's loading, the screen goes black and stays black. The machine had not crashed because the sound still worked (I could hear the startup sound and that noise it makes when it decides to load my mouse drivers) -THE potential CAUSE(s): Some people claim there is a bit of a conflict between windows' automatically detected new device driver "generic VGA adapter" thing, and the installed AMD drivers. Some people have stated that simply disabling auto detect/install drivers on windows fixed the problem. Another problem I've come across people claiming was a lack of voltage to the card. Personally, I'm thinking it's the voltage one. Though I'm working this off a 600w corsair psu (which is beyond PLENTY for this single card). Unlikely the psu's fault though. -THE FIX (at least the one that worked for me): This took quite a few hours to figure out but it was worth it. -If you tried installing drivers earlier/had residual driver from a previous card, wipe them. Kill them with fire if need be. -Start by installing JUST the drivers from the driver suite, uncheck everything else that can be unchecked (CCC, HDMI audio, etc). -Boot to the black screen. -Physically unplug the DVI cable from the card itself (or hdmi, dp, whatever. I happen to use the DVI port) and plug it back in. -If the screen came back, congrats. If it didn't, then the following isn't going to be helpful and you best get to filling out that RMA form... -Use MSI afterburner to DOWNCLOCK the memory from it's native 1500 MHz to something more sizable like, say, 1100 MHz. Apply these settings to startup. -Restart. It should have fixed the black screen upon booting. -If you want, you can up the memory clock bit by bit until it black screens again, that's your prerogative. I got mine to 1375 MHz before the black screens came back. -Go back and install the CCC, HDMI stuff, AMD gaming evolved app (if you're actually into that?)... -Enjoy. That's all I got. Note that fix ONLY applies to SOME cases of the black screen upon boot (after installing the drivers). I don't guarantee it will work for you even if you're having the exact same issues. If it's black screening/BSOD'ing during benchmarking/gaming, godspeed to ya.

Cons: Didn't include any bonus games as a far as I know. No Dirt Rally code. No AMD Rewards code. I registered on Sapphire Select Club for their Gold membership but got nothing for it. :-( No GPU backplate. Not the end of the world there.

Overall Review: Card length is actually 12.1 inches long. I got nervous when I saw Newegg list it as 13.25inches after I ordered the product. But the first thing I did was measure it. Its just over 12 inches long. It runs very similar to an R9 290X if you can't find benchmarks and need something to reference.

Pros: Great card for the money. I think it has the best price/performance ratio of anything in the 300 series. It performs very slightly better than a 290x. I was able to get a stable 8% overclock without upping the voltage, making the performance about equal to a 390x. At stock speeds it was hitting 70c under full gaming load, overclocked 74c. Cooler than a lot of other hawaii cards run.

Cons: The fan noise is definitely audible under load, but not louder than you would expect. Drivers are a bit buggy but that's normal for new amd releases. They will get better.

Overall Review: It just barely fits in my Corsair 400R case. The lack of a backplate is a non-issue. The cooler makes the card very sturdy and it doesn't sag. The weight is balanced towards the back so it doesn't put too much strain on the pci-e slot.

Pros: I purchased this card to run a 5x1 eyefinity setup, so far it’s been great, it’s a very fast card and considerable upgrade from a GTX 960.

Cons: Its a very long had issues installing because of the size. Had to disconnect my pc from the internet during setup, I think Windows was trying to download the driver from Windows update causing the screen to go black.

Pros: Runs cool 31c idle, 62c was the highest i saw gaming. I traded up from a 7950, and was very surprised based on other comments that it runs cooler while delivering much more.

Cons: For the people leaving bad reviews on this card... The card is indeed 12" in length, do some research... Use TRIXX and set a custom fan profile @50% fan speed unless you are fan less it's pretty darn quiet. Lastly, if you are moving from one AMD card to another(or any video card to any for that matter) don't just put drivers on top of drivers... delete the old and install the fresh ones...

Pros: The card is fast, plays everything with visuals turned way up. Cooler is quiet and very effective.

Cons: Getting the drivers to work took about 3 tries. You have to disable Windows Update when installing the card or it will download IDK what driver when it starts up and you will never have a good experience with the card HOT, after playing GTA 5 for about a half hour, I had to redo the fan profile for the case. Long, I had a case that had no problem, if you have a standard ATX case it may no fit.

Overall Review: DISABLE WINDOWS UPDATE BEFORE YOU INSTALL THE CARD!

Cons: -Long (12.1inchs or 308mm) when installed -Hot air producer depending on how intense the game is -750W psu requirement(debatable you can make due with a really good gold 550W-600W PSU if your not overclocking)

Overall Review: If you run windows,make sure you turn off Microsoft driver updates before you start installing your AMD drivers they may conflict, people forget to do this ALOT and RMA thinking the AMD card is bad.

Pros: Overall it can play almost everything on high settings without frame drop. I do have a older Motherboard without PCI E 3.0 so most of the power behind it isn't used, but it works flawlessly regardless. 8gb, like what isn't great about that? Runs really cool and without any noticeable sound with my speakers blaring, but with headphones you can hear it when it gets up to 70c.

Cons: 13.25" x 8.50" are the dimensions so with my older Asrock Micro ATX board and NZXT Full Tower Source 550 case they don't line up all the way, but it was a tight fit until I got my new MSI Gaming MoBo. GTA V takes up a lot of vram even with this card, so expect pop in and junk frame drops from 60 to 40 out of nowhere. Overall needs driver updates to support the card better, so I can't wait. Hopefully before Fallout 4? Even with more Cons than Pros, this still gets a 4/5 because of its ability to keep a stable frame rate on everything.

Overall Review: My processor is kind old too, quad core at 3ghz AMD Athlon II X4 640. So take my thoughts with a grain of salt. Buy this card if you don't know if it's good enough, it's satisfied my every need.