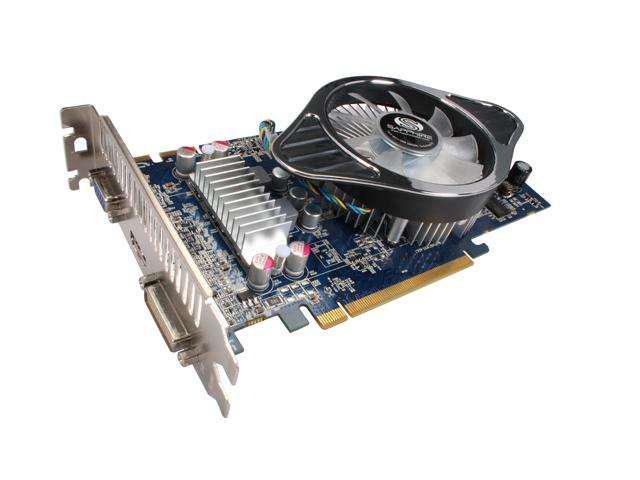 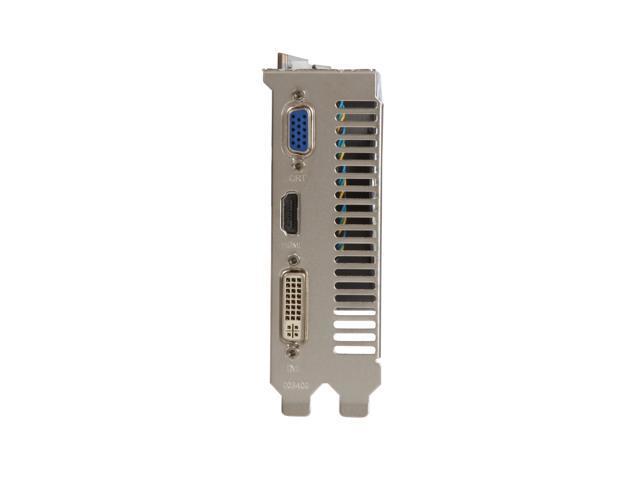 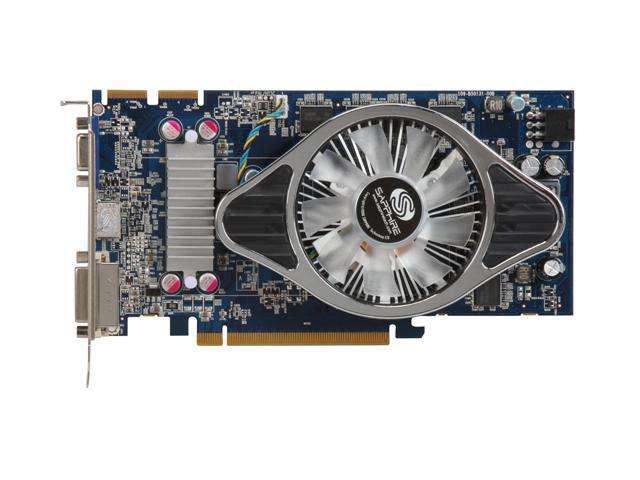 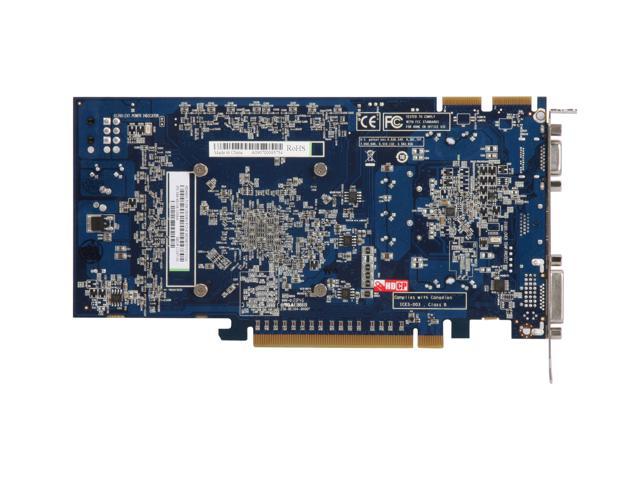 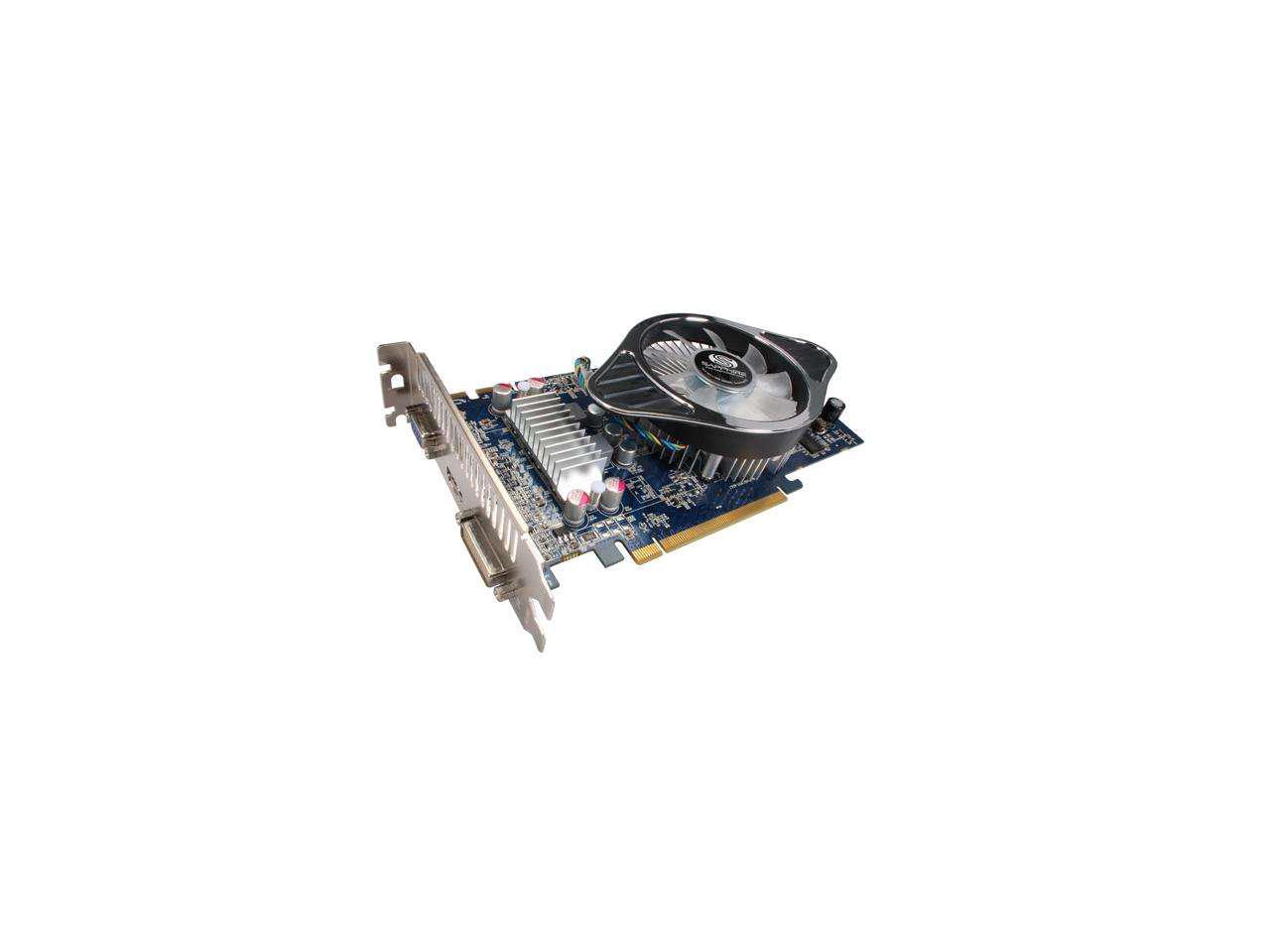 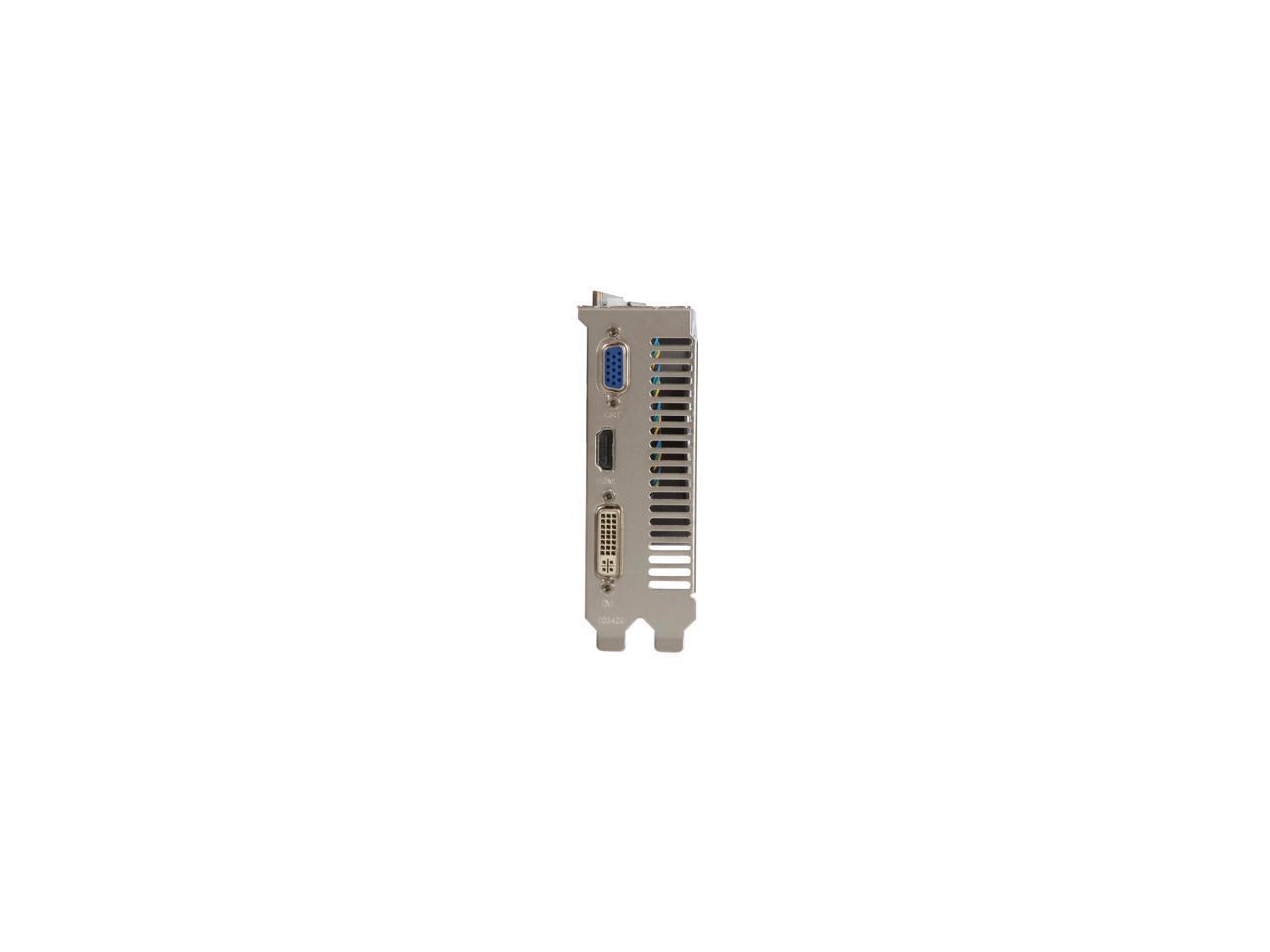 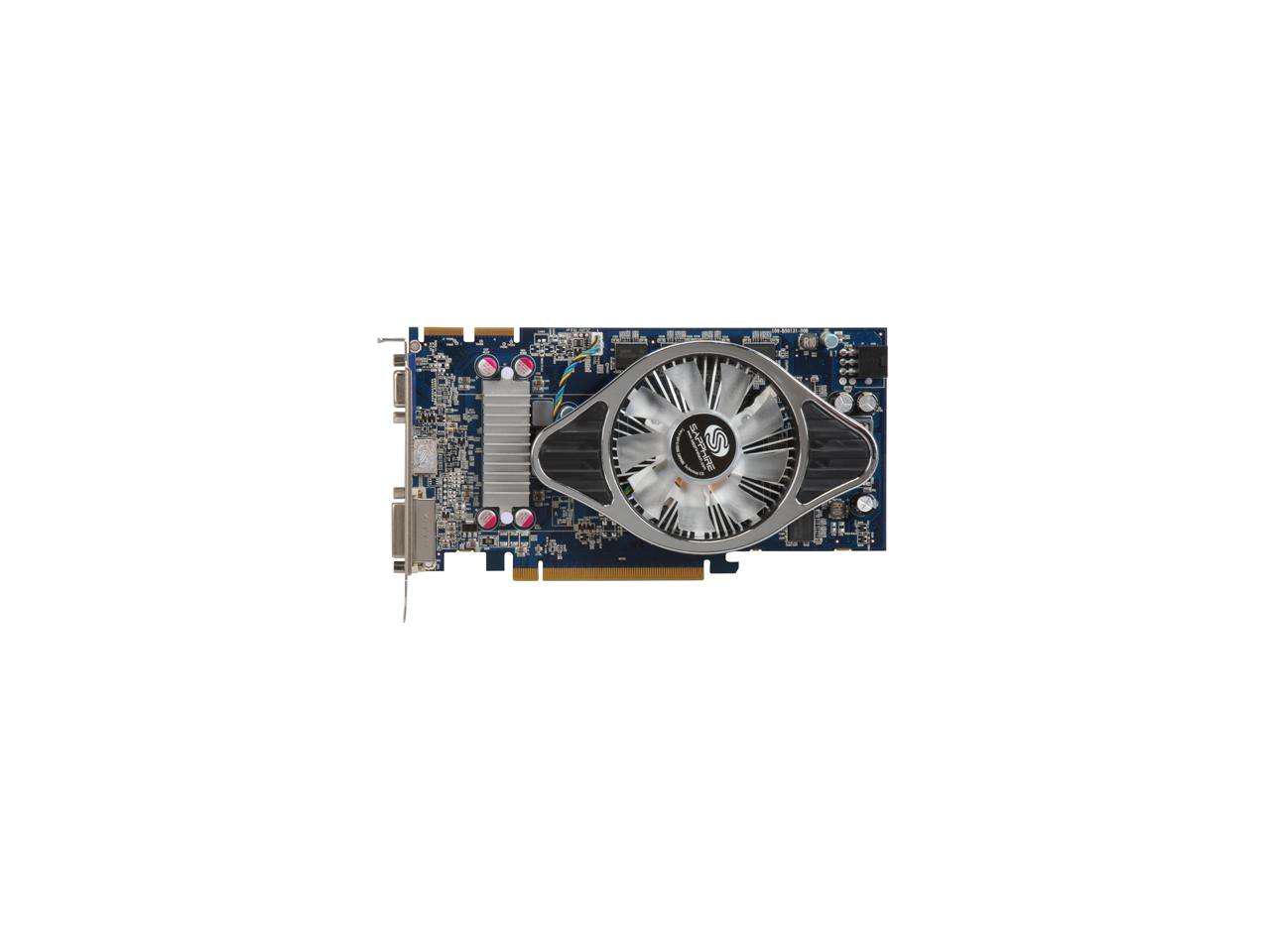 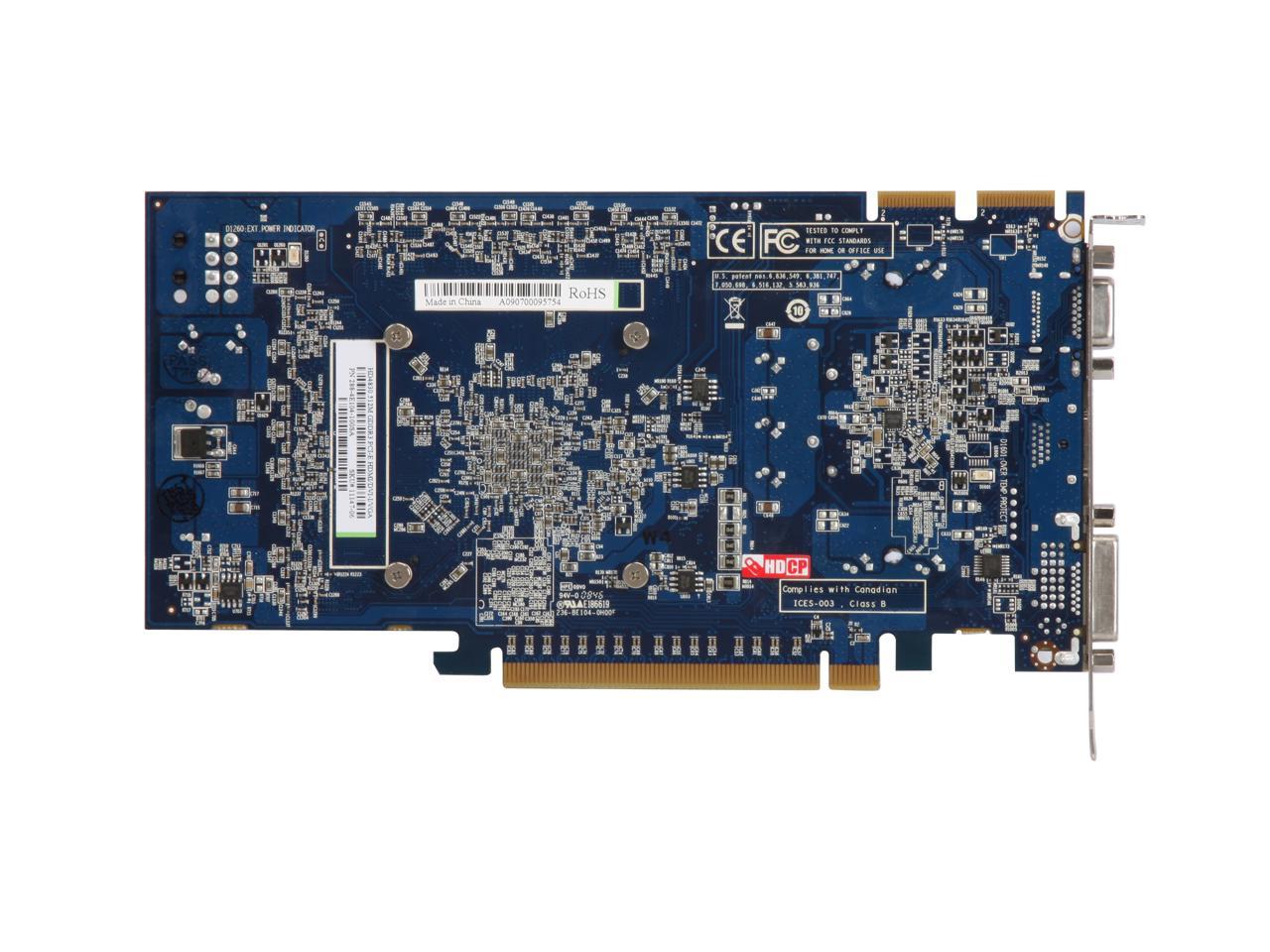 (247) Write a Review
OUT OF STOCK.
Fees for brokerage and duty included in price.
Specs
Reviews

Pros: My last card was a Radeon x1650 build by Diamond. Compared to my old card this new one by Sapphire is practically an ice queen. I'm running both of them on two separate machines and the old one is running 60c on the desktop while the new one is running 45c while playing World of Warcraft and overclocked by a decent bit. Likewise while the card shows its budgetary constraints, it won't play Crysis at maximum settings with a frame rate much over 30 FPS for example, it still manages to provide very good quality performance for every game I've played since buying it and remaining very stable while doing so.

Cons: The only cons I can think of are that it has a tendency to do a soft crash where Windows restarts the drivers if I play The Last Remnant while over-clocking the card and the over-sized nature of the cooling equipment. Since the card can easily handle all but the most extreme graphics in that game at stock speeds and I bought a motherboard where such over-sized cooling wouldn't block a slot these aren't really major cons.

Overall Review: When I bought this card I looked at both its current performance, how it might fare in the future, how it stacks up to comparably priced nVidia cards, and how cost-effective it would be to buy a second one of these cards down the road and Crossfire them instead of upgrading to a whole new card. Taking all those factors into account this was one of the best cards on the market at the time I purchased it.

Pros: I am gonna say that this thing is huge but I actually liked that it was big. It was cheap had all the connections I needed, hooked it up to my 40" Sony TV via the HDMI connection.

Cons: Others complained about the size of this video card. I didn't mind, I simply installed it last. Problem solved.

Overall Review: Nice video card, for the price. Had HDMI connection. No complaints.

Pros: Runs WoW at about 50fps. Increased my windows system rating from a 3.9 to a 5.9. according to other review sites it ranks up there with the 4850. The ATI Catalyst control center was easy to maneuver around to adjust the overclocking settings. I was able to max out the GPU (700 Mhz) and the memory at 1145 Mhz out of 1200Mhz. I highly suggest at least a 500W power supply or your system may crash. I bought a 500W p/s to go w/ the new card, and no problems. Overall its a great card for an excellent price.

Cons: The fan is a bit loud, but not unbearable...I really dont even hear it unless I really listen. When I do really hear it, is when I start up a game such as WoW, but then it settles down, and I can barely hear it.

Pros: this card can play almost everygame i throw at it at maximum settings with great framerates. This card runs cool and quiet ive upgraded from radeon x1950 pro which was also a great card but this 1 is just more than 2x the performance and i only pay $80 for it.

Cons: nothing bad about this one

Overall Review: bottom line this is the best card to get till directx 11.

Cons: Had to rearrange the tower to get the sata cables to fit, but no biggie. 2 slots but I had known that.

Overall Review: I love this card. I am a new father so I don't have a lot of money and this card fitted my needs. I had just got an acer h213h and my stock vid card could not keep up with it. This card has no problem. I set everything to max and did the auto overclock and it set it at 690 clock and 1024 memory on my mainly stock system. I am running aN Acer m3104 system (Mostly stock) An Apevia 500w power supply and now a Sapphire HD 4830 Acer H213H 1080 monitor

Overall Review: Perfect for HTPC use. Replaced onboard video which didn't have the horsepower for my needs. Vista x64 went from 3.4 to 5.9. One HDMI cable from computer to 50" Samsung DLP display by way of Yamaha A/V receiver carries both video and audio.

Pros: Cheap - got it for a good price with discount + free shipping. Able to Run all my games MAX at 1280x1024 (Team Fortress 2, Battlefield Heroes, and Combat Arm) - not very demanding I know but it cuts through them like butter. Overclocked from stock settings at 575/900 to 700/1200 (The max that ATI Overdrive would allow) and have about a 20FPS increase in the max and avg FPS.

Cons: None - this card is great however in the future I feel I will need to upgrade but not for a year or so.

Overall Review: People complain about their card being loud - I have my fan set to 100% all the time and it can hear it in my case but nothing worth complaining about, not really loud at all. AMD 64x2 5600+ (2.8ghz), 2gb RAM, and older IDE drives. Still a decent system for gaming.

Pros: This card enables my son to use maximum settings in all his graphic intensive games. He is a serious gamer, quite particular and is very happy with it's performance. The fan is quieter than the case fans. This replaces the internal HD 3200 video.

Cons: No problems at all.

Overall Review: We use a Foxconn A7GM-S Mobo with 8 GB DDR II RAM, AMD Athlon 64 X2 6000+ Windsor 3.0GHz overclocked to 3.3 GHz. The OS is Windows 7 64 bit Beta which I may add has been flawless in performance and dependability on this computer.