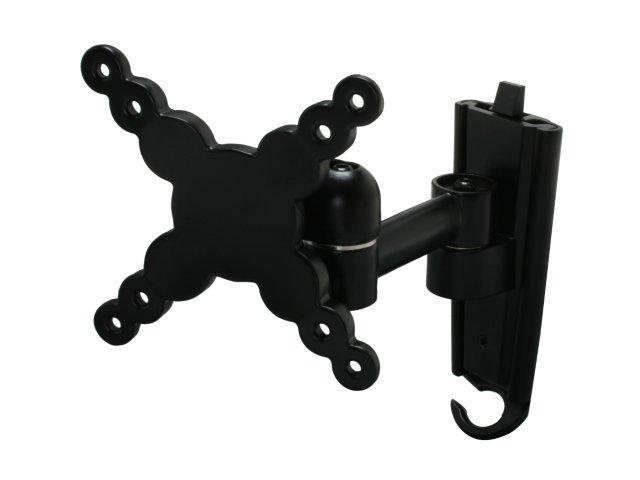 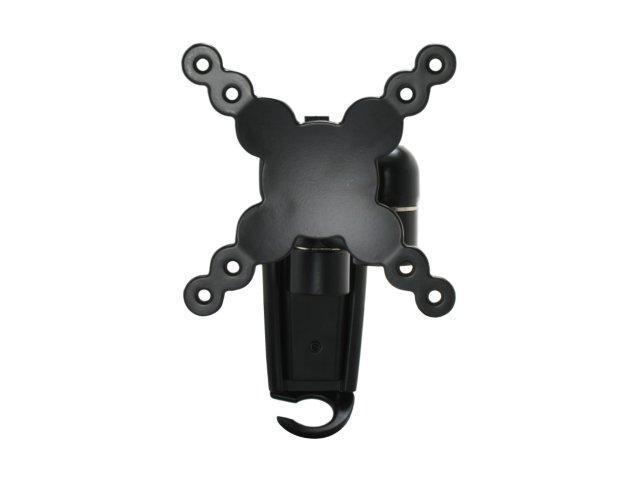 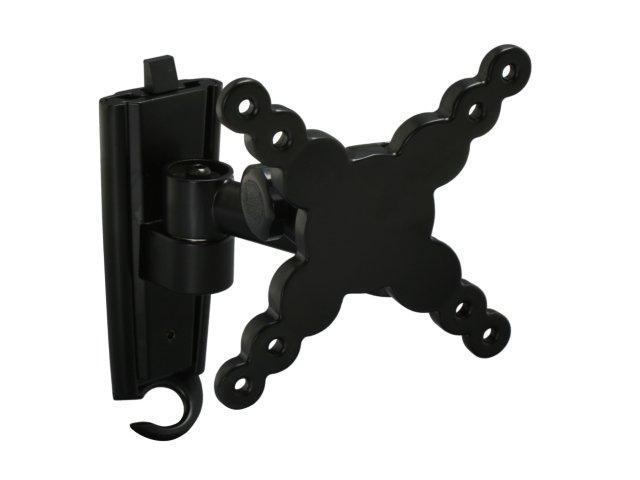 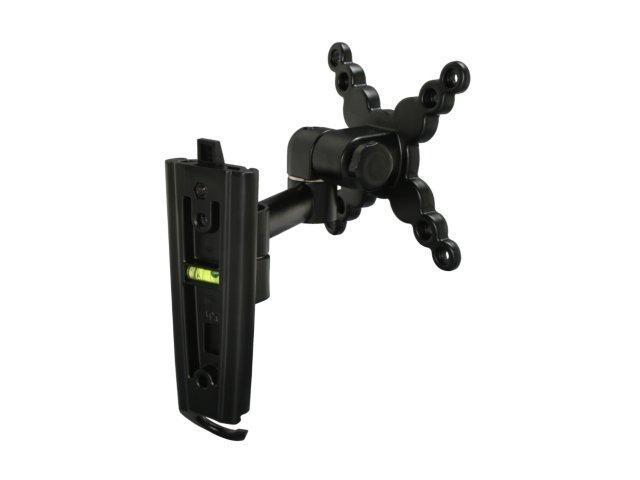 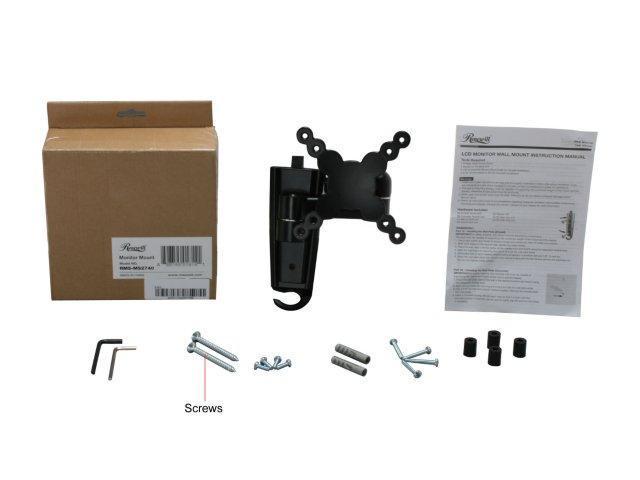 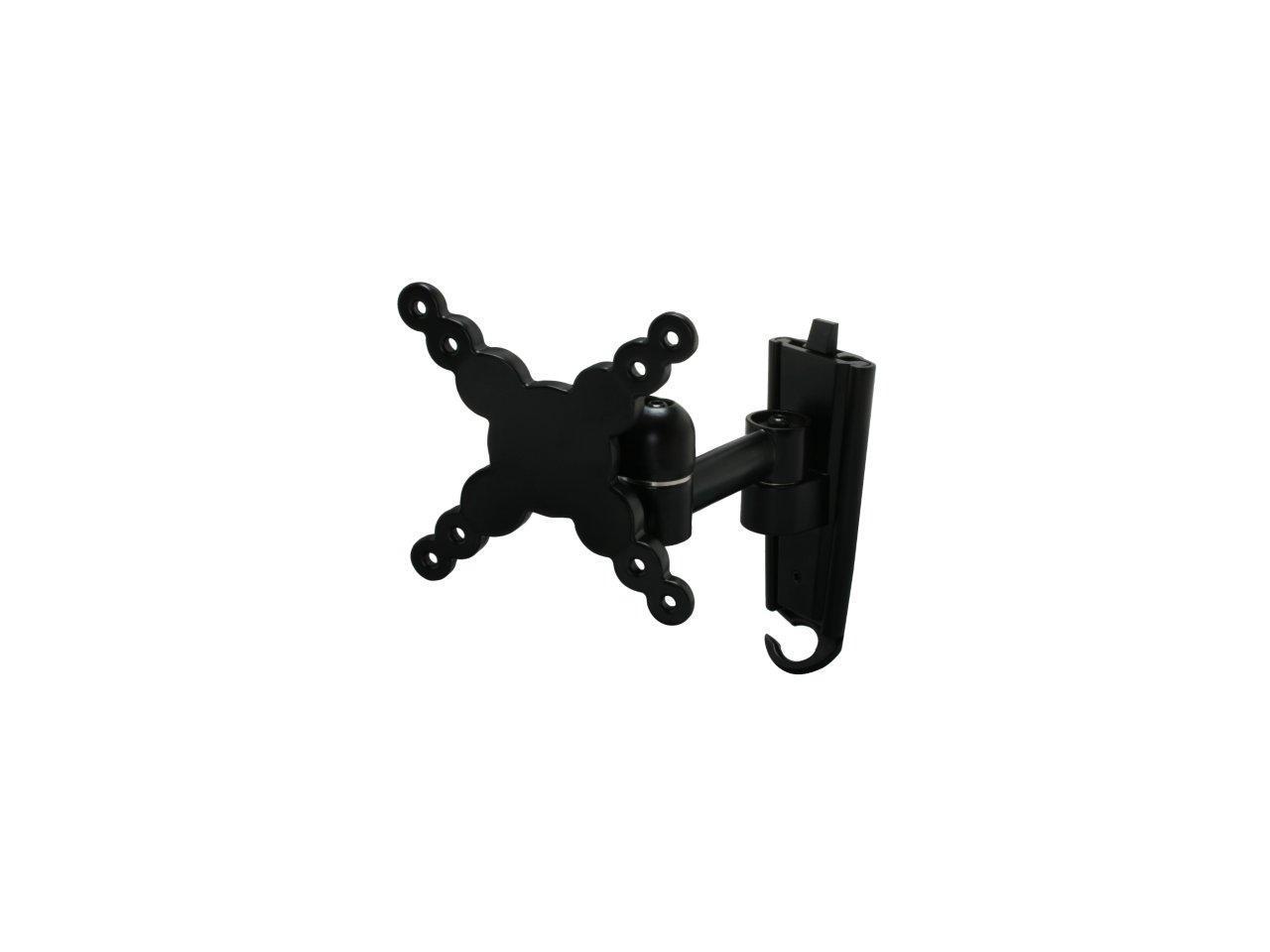 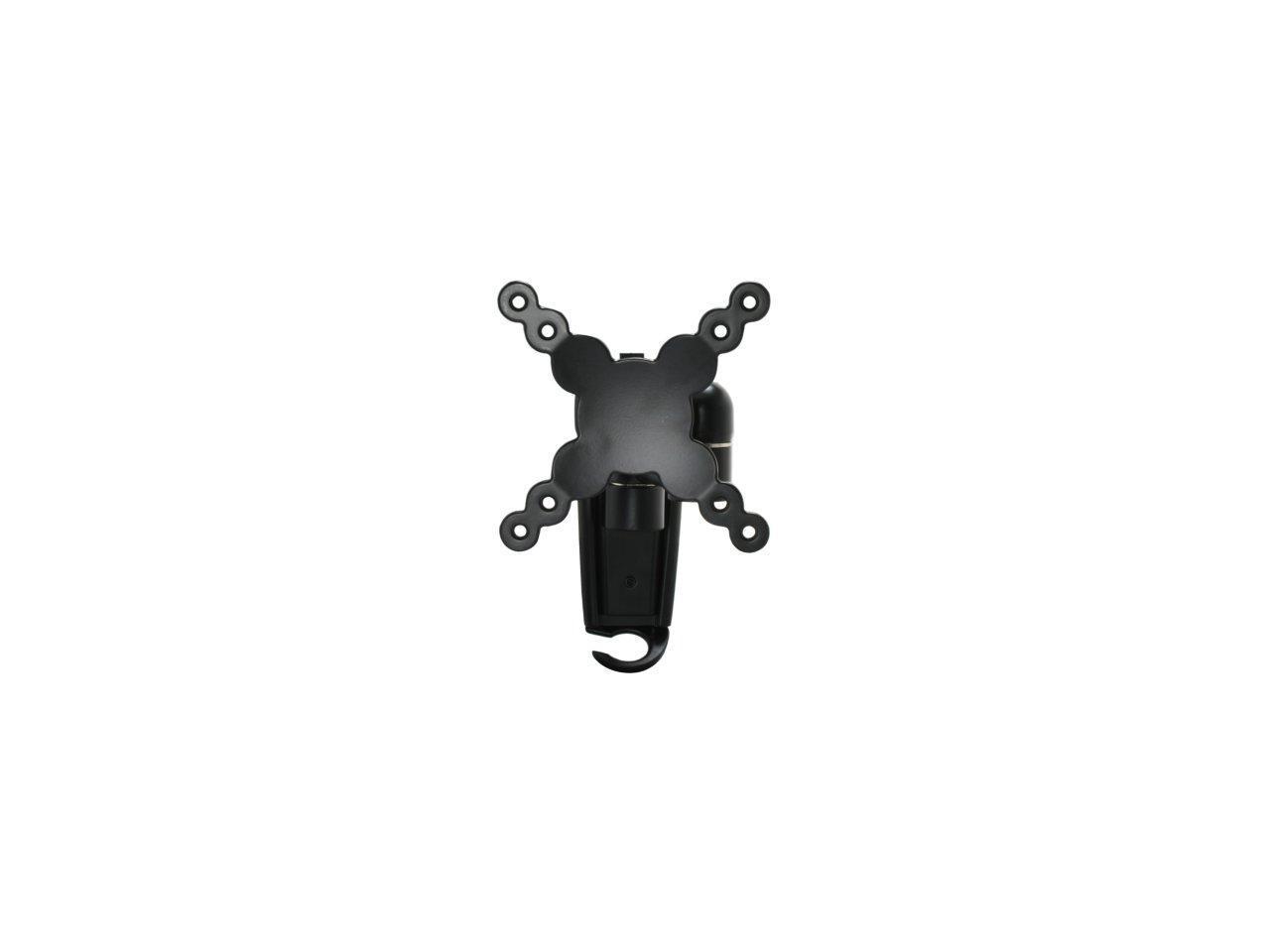 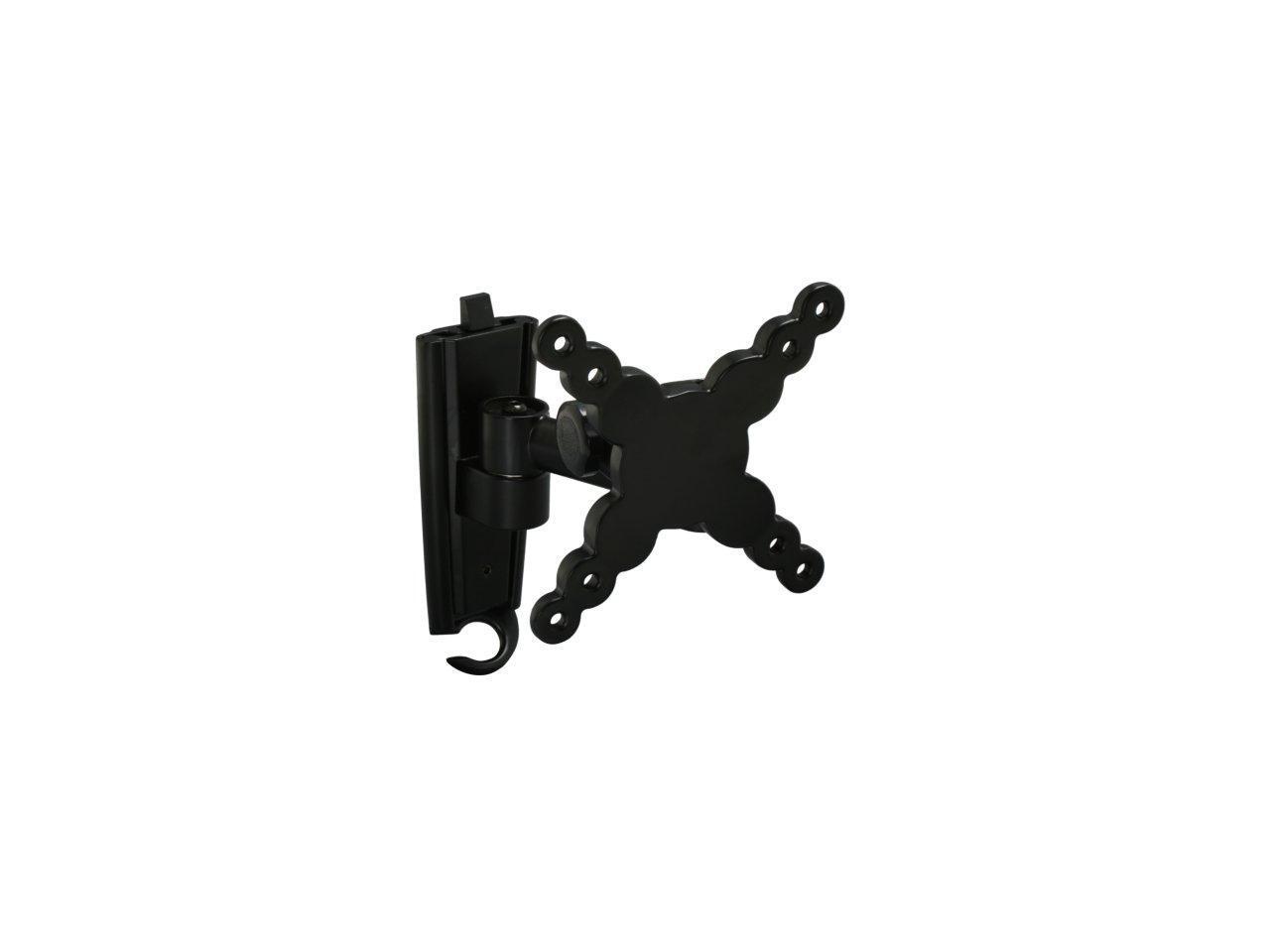 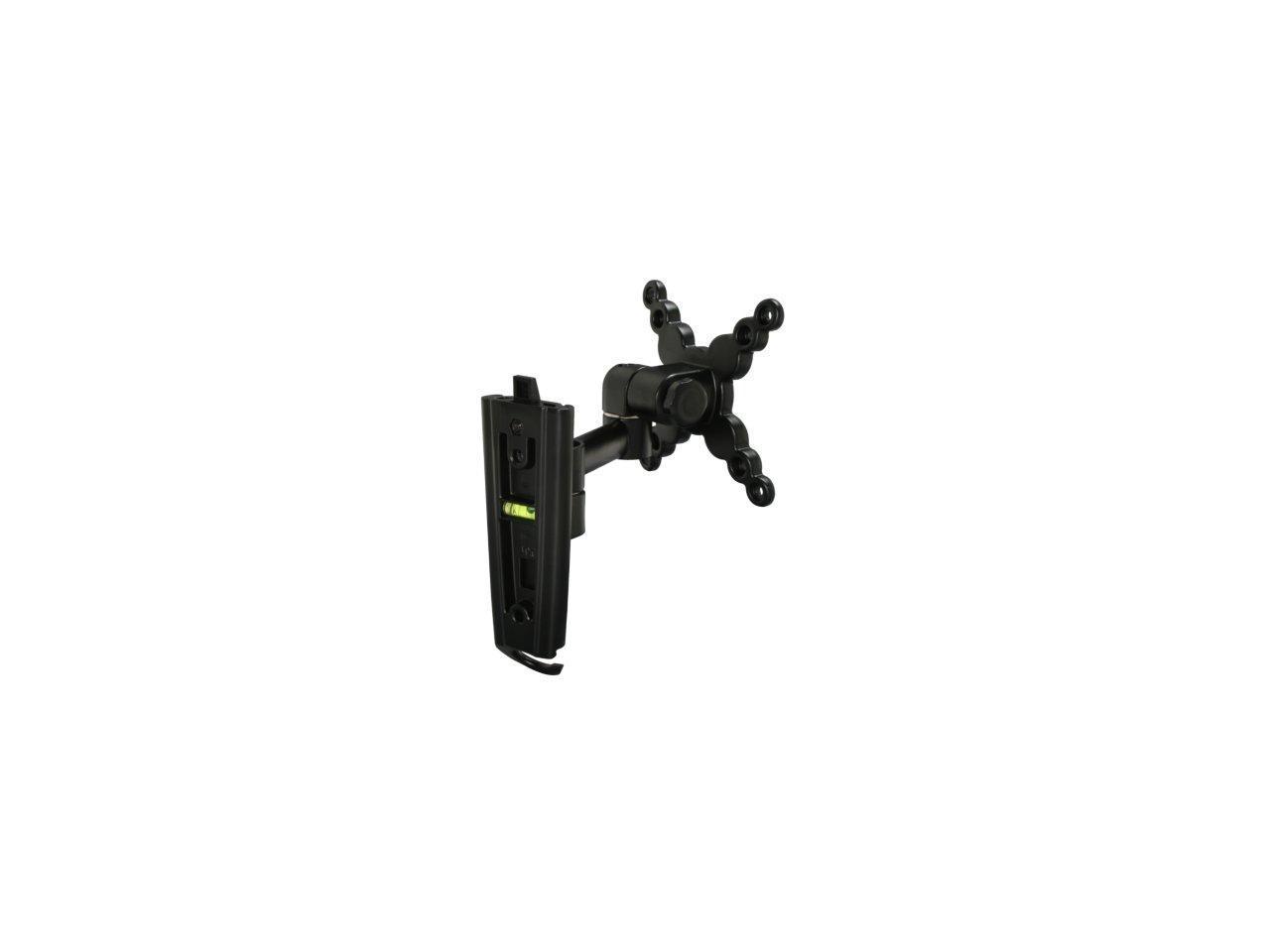 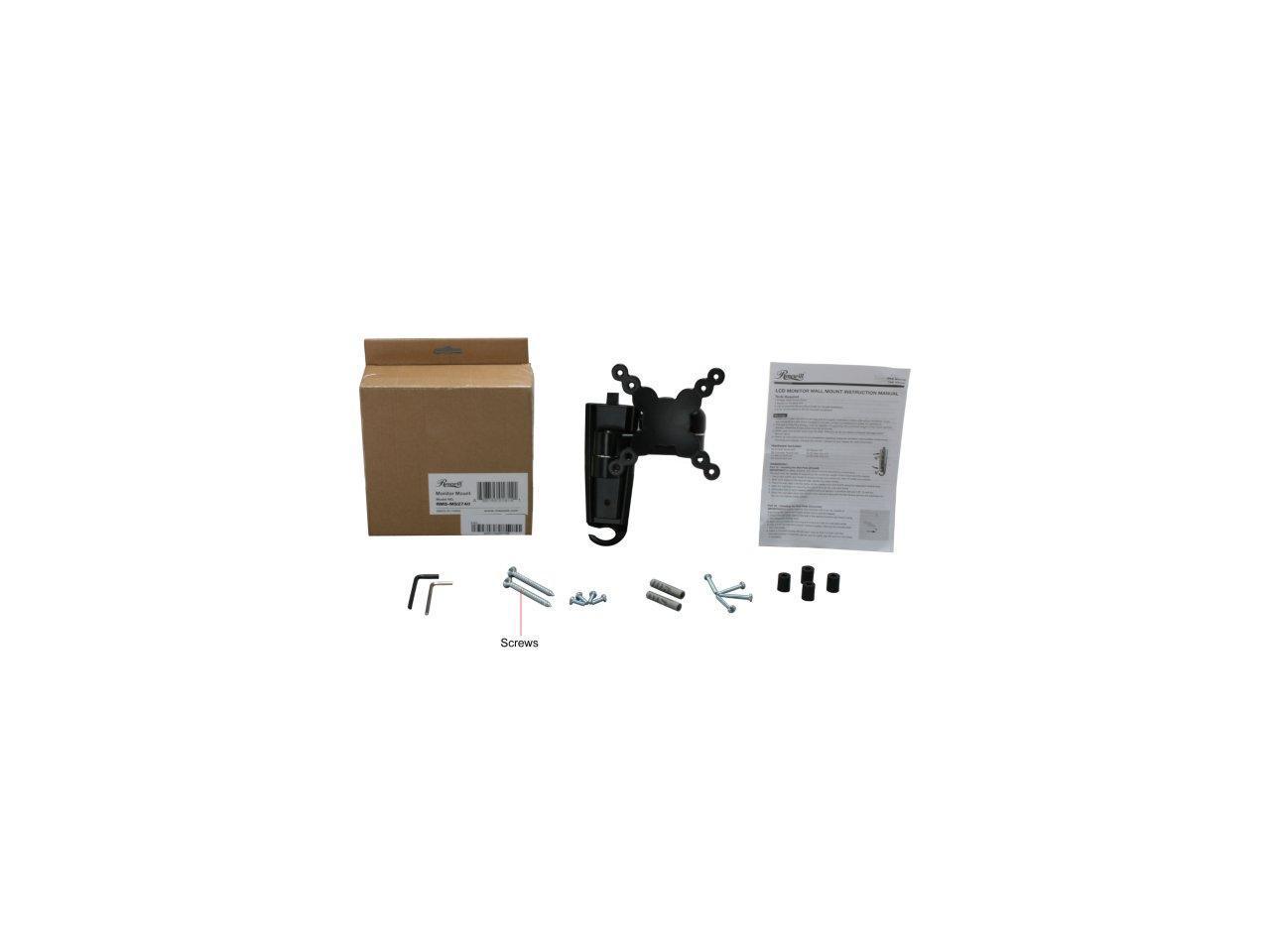 The Rosewill RMS-MS2740 Tilt & Swivel Wall Mount is a perfect match for modern LED backlight LCD TVs. It supports TVs from 13” to 24” in size, weighing up to 40 lbs., and features a 100mm x 100mm maxmum VESA mounting pattern.

This low-profile wall mount extends your TV up to 6.4-inch out away from the wall, and retract back to the wall with a distance of only 2.8-inch. Thanks to its fully adjustable mechanism, this wall mount can be adjusted for a comfortable and optimized viewing experience. Constructed of solid aluminum alloy construction, this wall-mount is extremely durable and tough to withstand heavy duty use.

Installation is quick and easy. An integrated bubble level allows for easy alignment when mounting.

What’s in the Box? Pros: Black, fairly sturdy construction, easy to install. Has a bubble in the wall-mounted part. All of the needed hardware is in a nice, vinyl pouch and it even includes decent instructions. Does wonders for freeing up some desk or counter space.

Cons: Metal could be more dense to prevent it from cracking. The bubble level wasn't accurate. Having a bit more arm extension would have been nice, as this arm is so short that larger monitors aren't able to turn very much.

Overall Review: Here's how this works - it's basically 2 pieces. You take the one piece that mounts vertically to a stud via two large but included screws. The cable holder should be at the bottom. You should pilot those holes with a drill bit first so you don't strip the easily strippable head of the screw. Once that is in place, you take whatever is bolted to the back of your monitor off (should be 4 screws) and screw them through the holes in the arm piece which will then secure the arm to the back of your monitor. Then you just slide the arm onto the wall plate and tighten down the small hex screw to keep it steady. That's all there is to mounting this.

Pros: The monitor is successfully and quite firmly upon the wall and it has the advertised range of motion. The price made it a no-brainer. The picture does little justice to this mount.. it is heavy metal; cold to the touch. You get a solid metal clank if you knock the pieces together, before installation. That's reassuring, to me.

Cons: If you move the arm all the way to the left, the weight of your monitor will cause the arm to sag very slightly at the nearest pivot point. I have adjusted and tightened using the provided allen keys, but it still does it. Also, there is a potential for slight shifting, because of monitor weight. When you install the mount, you first level and fasten a bracket to the wall. The mount then slights in to this bracket. The problem with these two pieces seems to be a slight difference in size. They don't fit snugly together, allowing the mount to shift like a half-centimeter both ways. I would imagine that a thin layer or small dabs of lock-tite (or some other temporary adhesive) would be adequate to stop this shifting. The provided drywall screws are about a half-inch too long, in my case.

Overall Review: If your the screws are too long for you, either take them to the hardware store to find shorter ones, or use a piece of wood to pad the extra space between the wall and mount. If you do opt for screws of a different length, be sure that the HEAD is the same size as the provided screws. You can't use screws with smaller heads, because the mount is sunk for a certain size. (I think they're like #12 size heads) All of the cons in mind, I have no regrets with this purchase. I only want the arm so I have the option to bring the screen closer to me, so I don't encounter the problems which I've described, unless I'm trying to demonstrate them. If you need something better than what I've described, go for a Peerless - they're peerless. ;)

Pros: This thing took less than 10 minutes to install including getting my monitor up and on it. I have a 22" lcd that weighs probably 8-10lbs and this thing does not move. (Not the arm, I mean the anchor in the wall.) The arm is easy to move around and stays where you put it. Another thing I noticed that I haven't seen anyone else talk about. This thing has a level in the anchor! How much easier could they make it! This thing is awesome, I'm definitely buying more for my other monitors.

Pros: I do hardware, software and media consulting onsite and in my shop. I normally do not have the luxury of marking up hardware and make my living on labor charges. I love these mounts! They are slicker looking than the competition sold at local retail for five times the price. That means I can mark them up 3-4 times and still appear to be giving the customer a great bargain! The build quality and little perks like the built in level are a joy to install. Overall this gets an 11 on a 10 scale!

Pros: Mechanically speaking, the mount works well for the price. The swivel hinge adds about 5" of forward/backward movement against the wall. For an HP2408 lcd, this allows a range getting close to +/-40 degrees left-to-right adjustment. The heavy duty screws work well if you find a wall stud. I would suggest not using the sheet rock anchors if you plan to constantly move the monitor/tv around (thus the hinged arm).

Cons: The up/down tilt is a little cumbersome with the tension screw. Fine adjustment is not possible due to how the large the tension teeth are. I was lucky enough to set the height just right and have the screen tilting up just enough for ergonomic use.

Overall Review: Good price for the product. Am happy so far with it.

Cons: took off an egg because the weight of the monitor makes it difficult to have precision angles. it will end up "resting" at pre-made notches.

Overall Review: for the price these are great, picked up 2 of them and will probably get a 3rd. Recommended them to all my friends.

Pros: Got it during a weekend deal for 14.99 and free ship. Very pleased with the quality. The handy install packet(screws etc) is a plus! The anchor screws are overkill (large) for my 23" 10lb monitor. But I know it will be secure.

Overall Review: Someone said it doesn't swing right. I thought that at first, till I played w/ it before the install. So I guess it needs a little play first.

Pros: Works amazingly. The extended arm is a very nice touch and that it can tilt

Cons: When mounting use a bigger bit then what they ask, because they ask for a 1/8" drill bit and the screw is bigger than that so you could strip it out. Too bad it doesn't have a way adjustment it to level it when you don't mount it exactly well (doesn't take away an egg).

Overall Review: Very inexpensive but quality built item. I would strongly recommend this to someone that is looking into mounting their TV/Monitor.