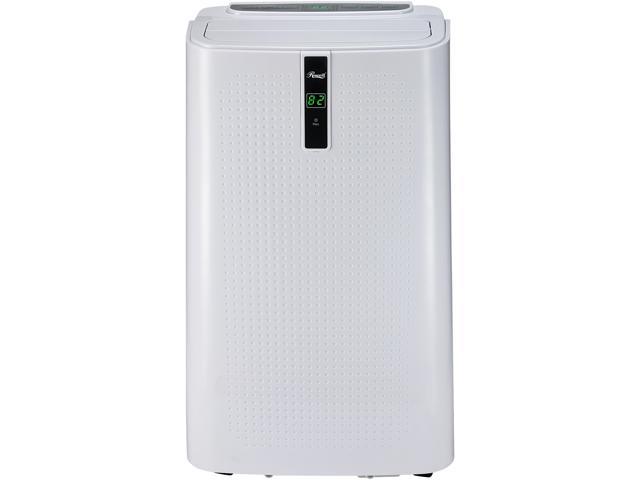 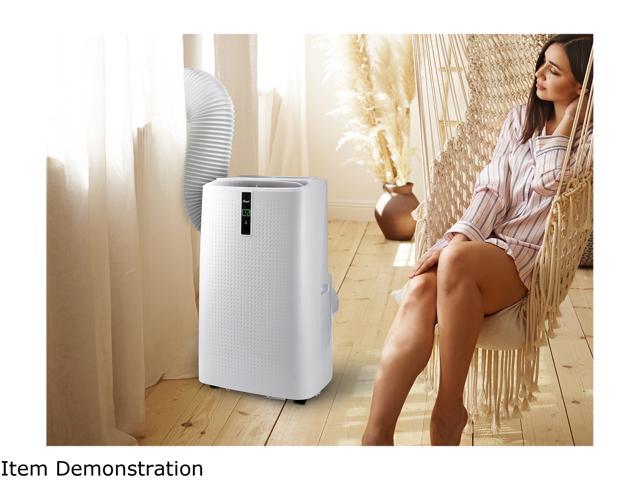 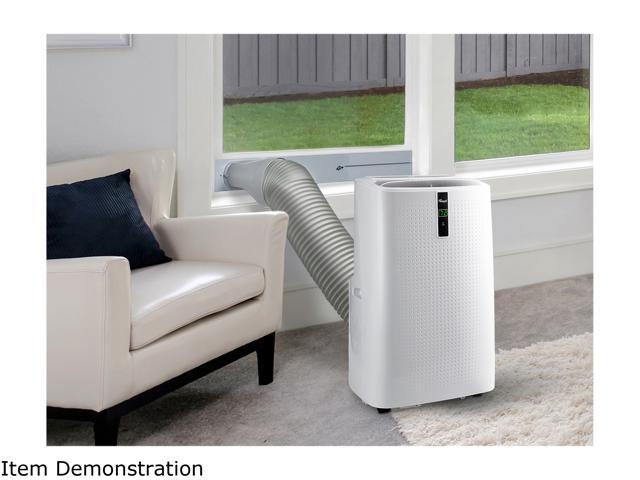 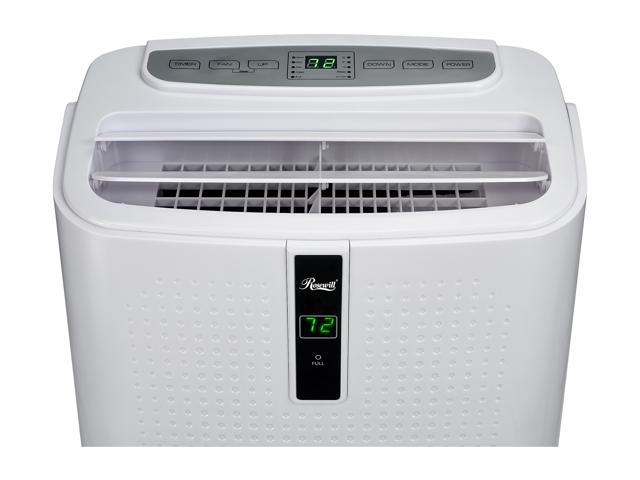 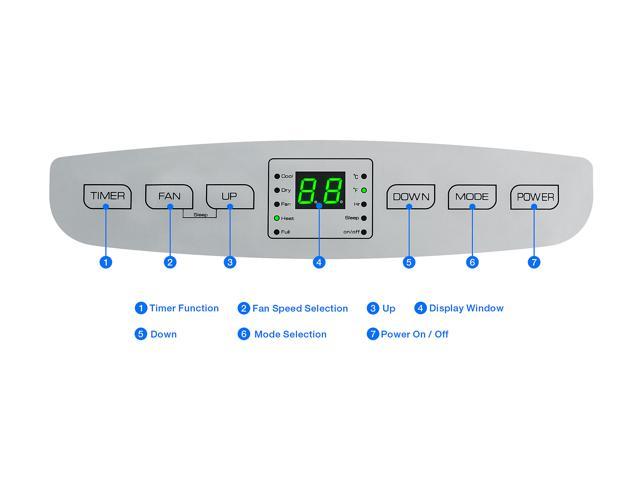 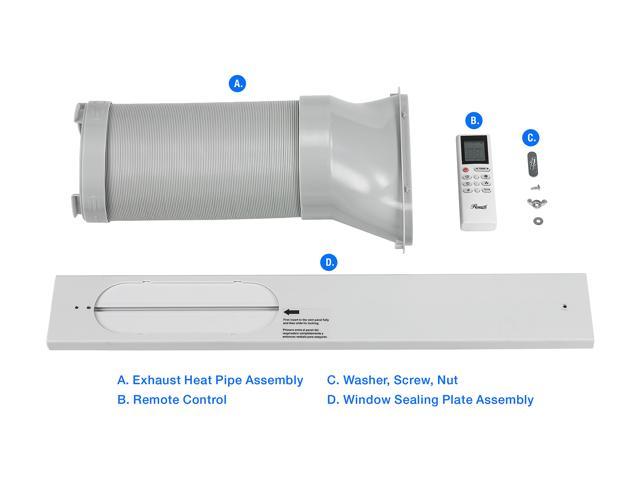 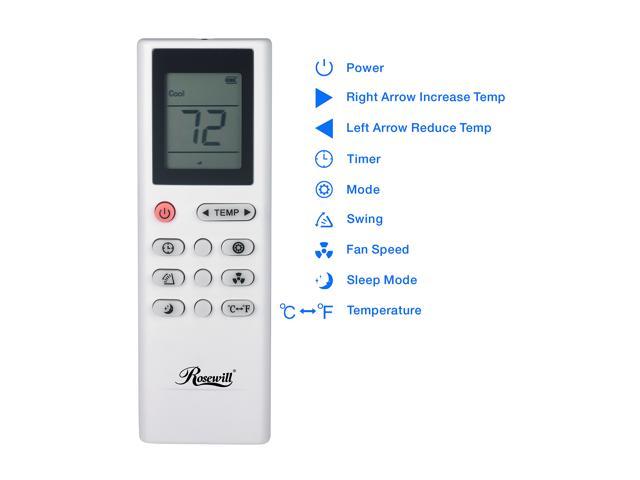 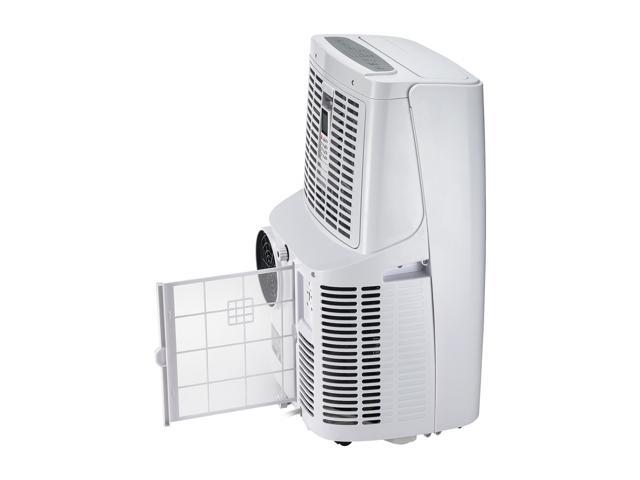 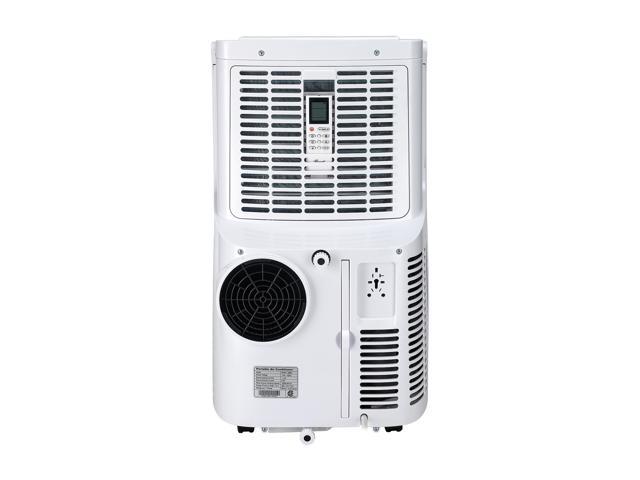 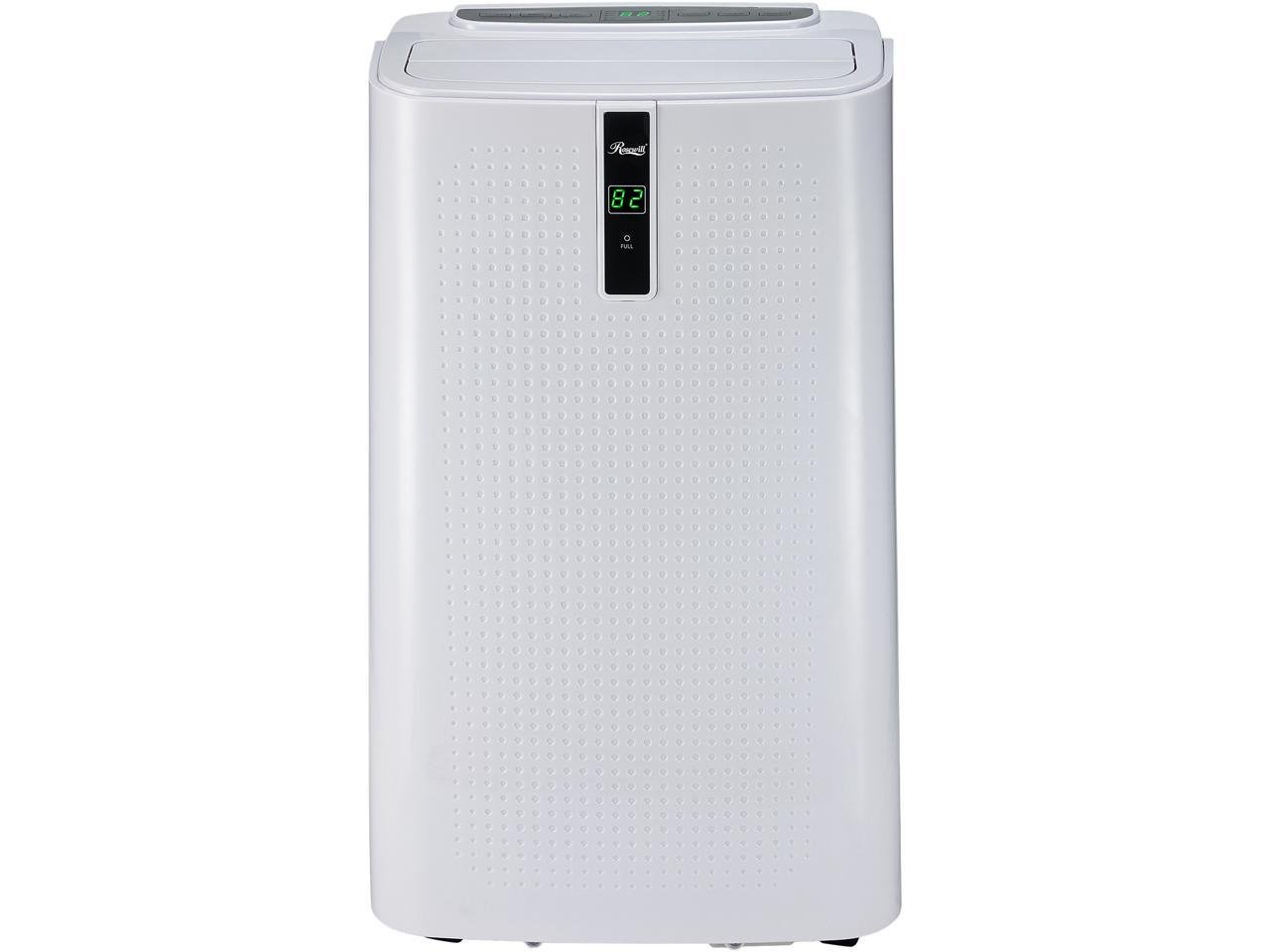 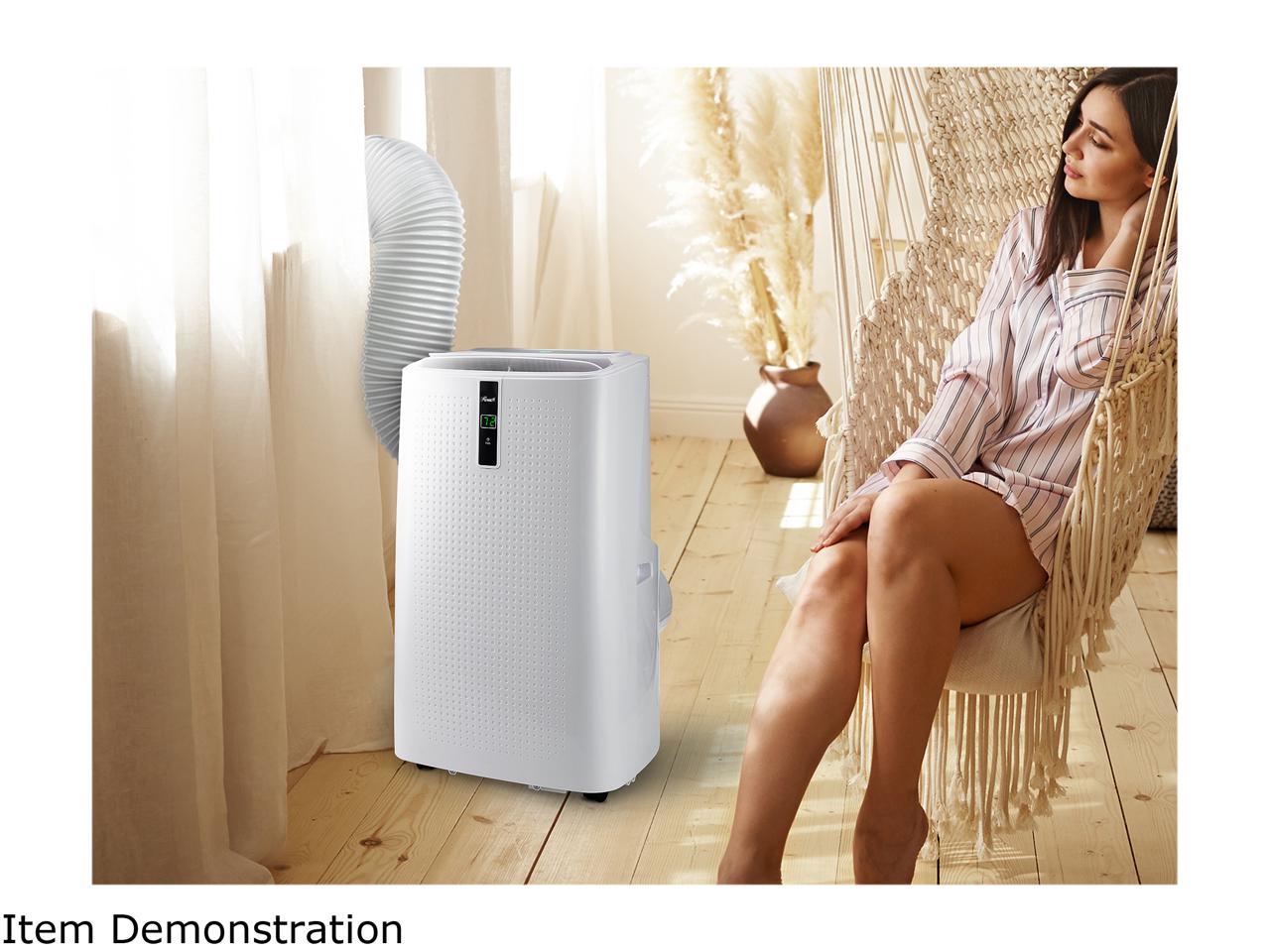 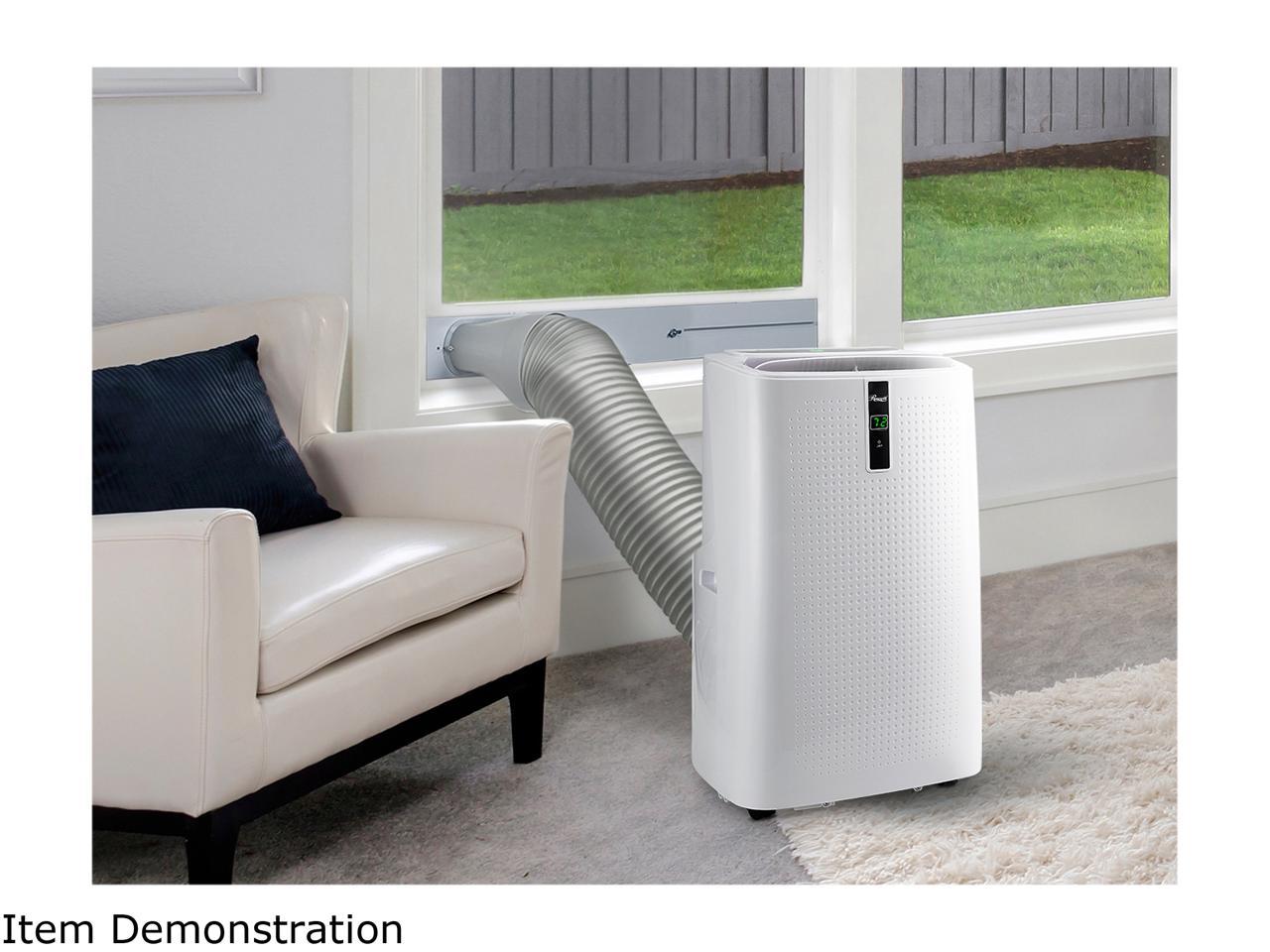 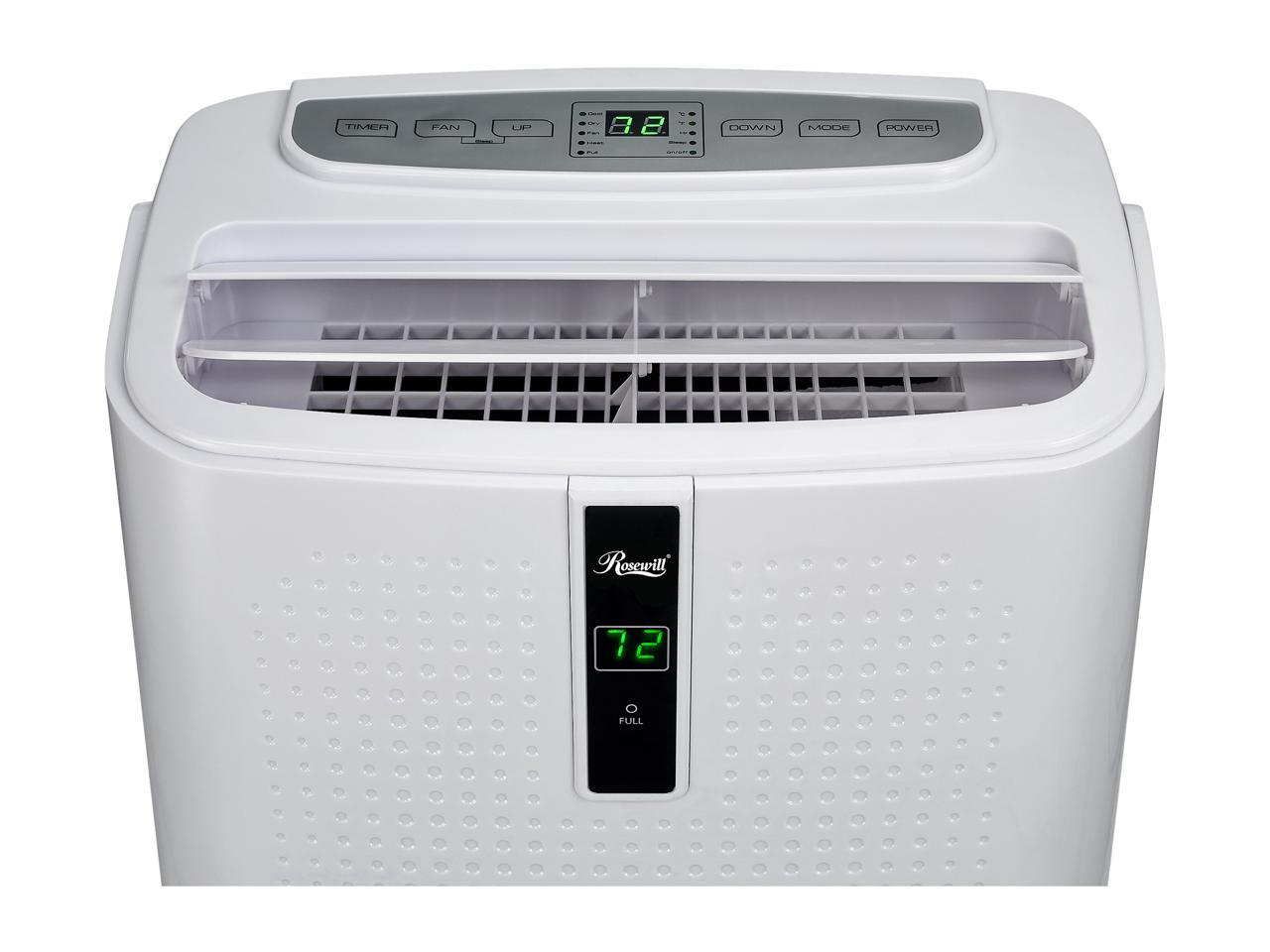 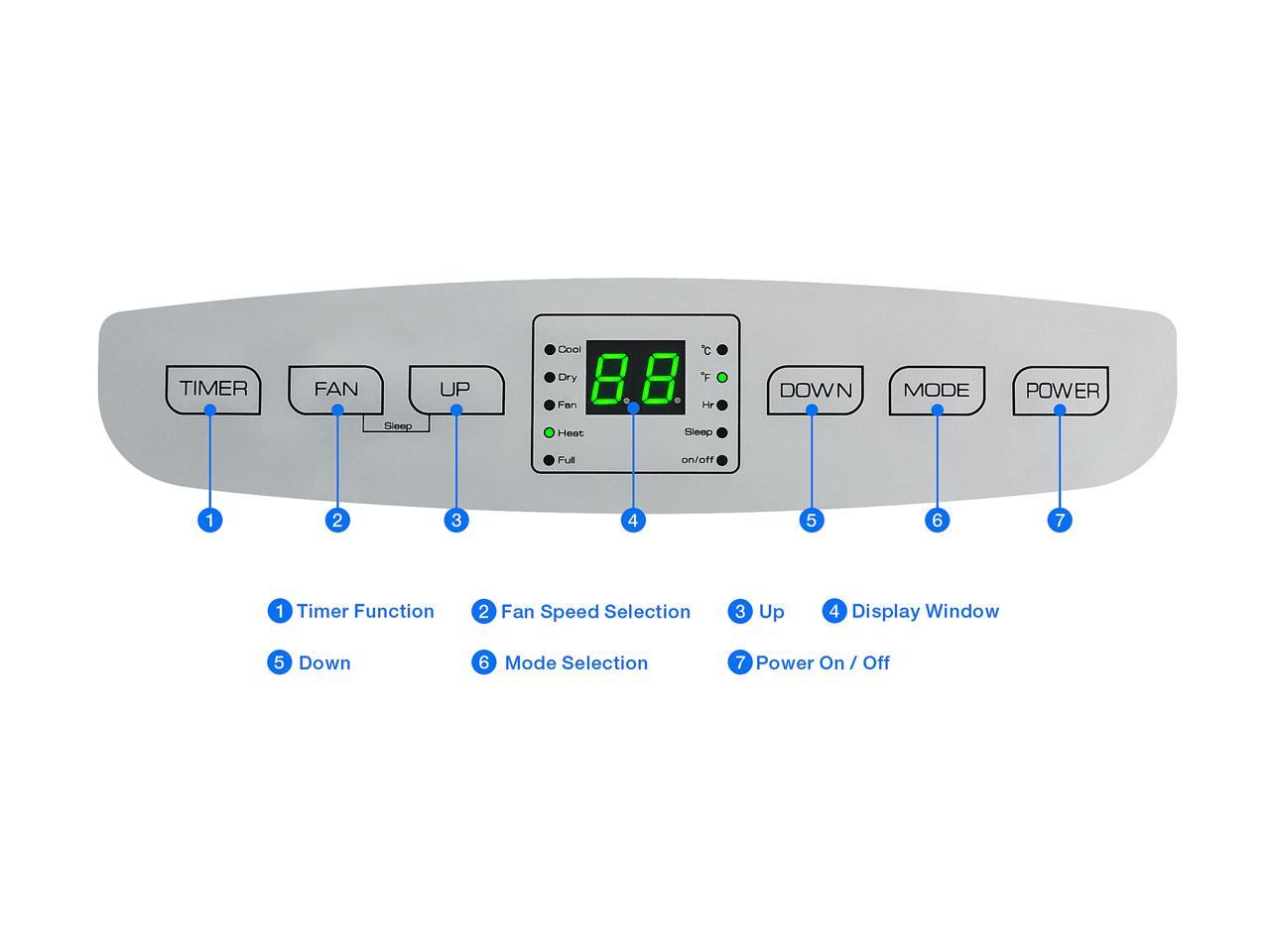 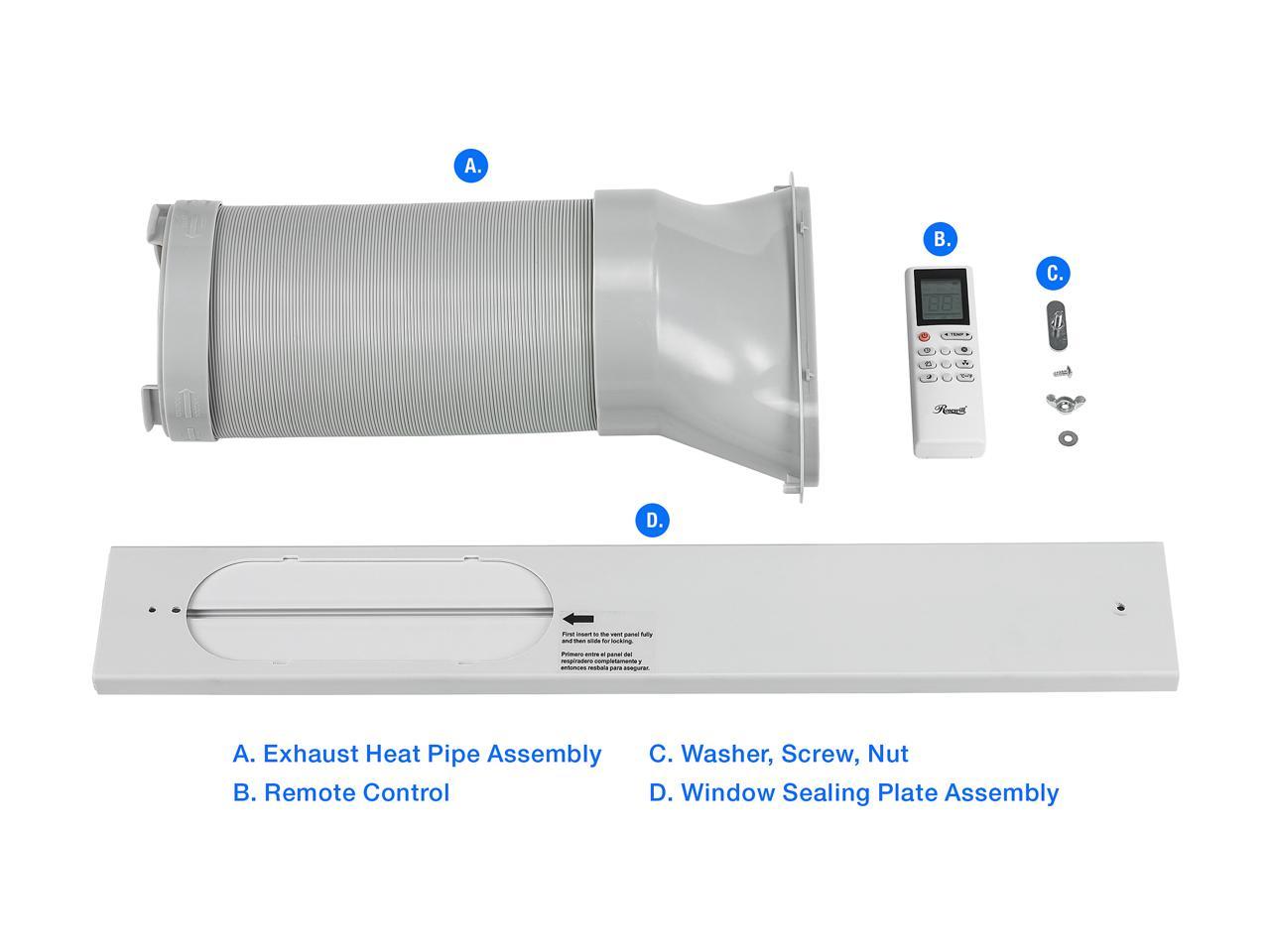 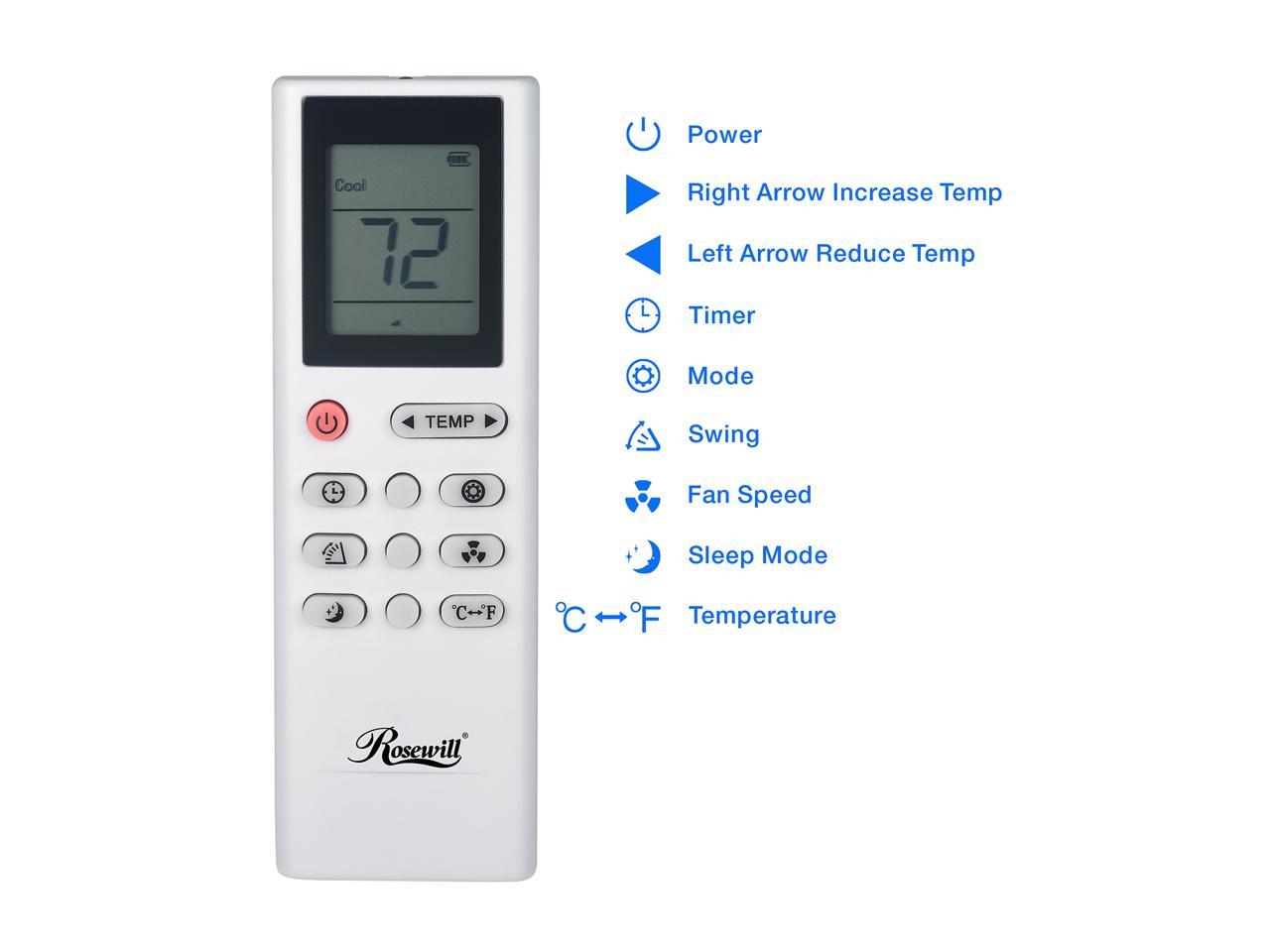 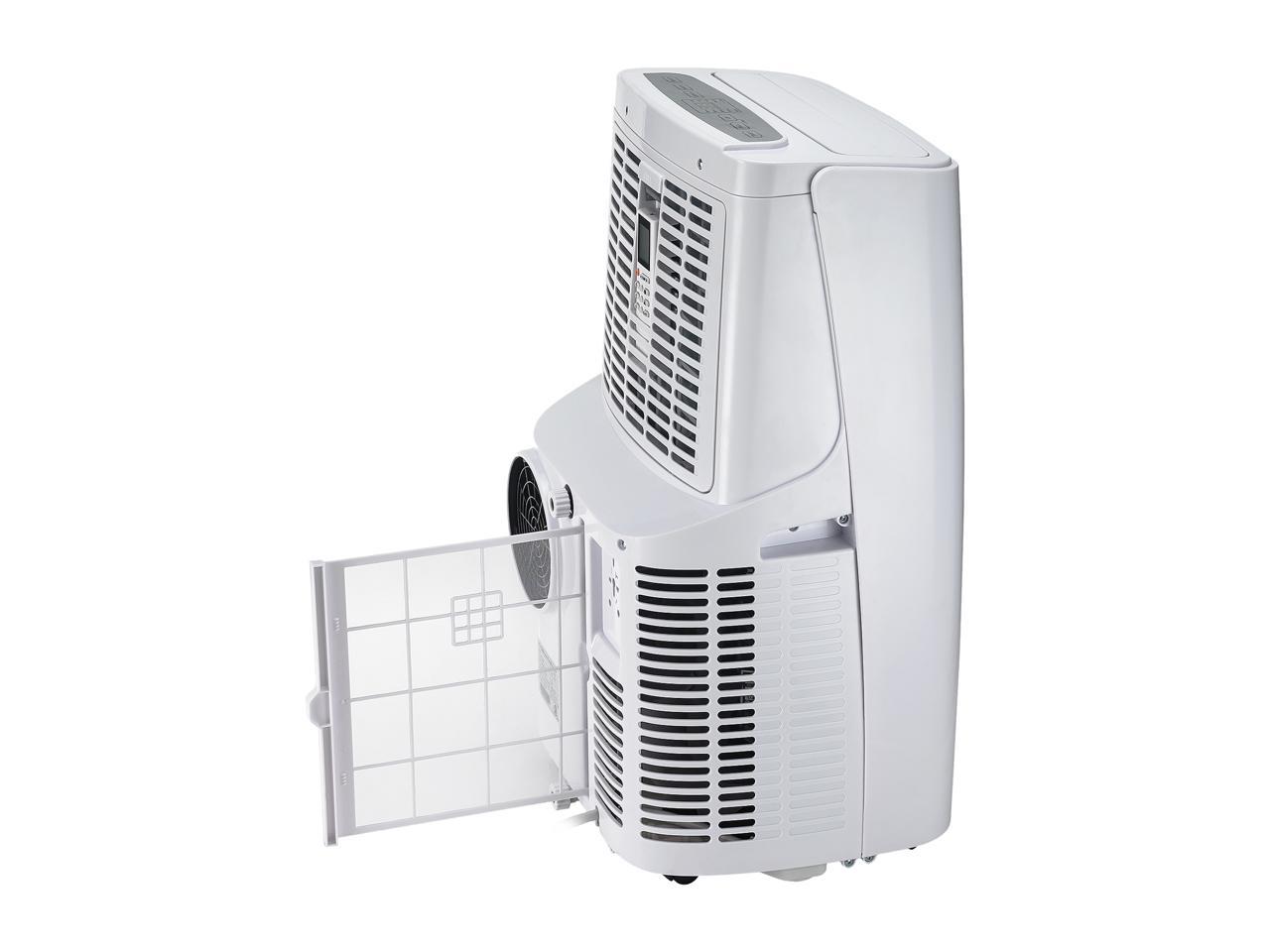 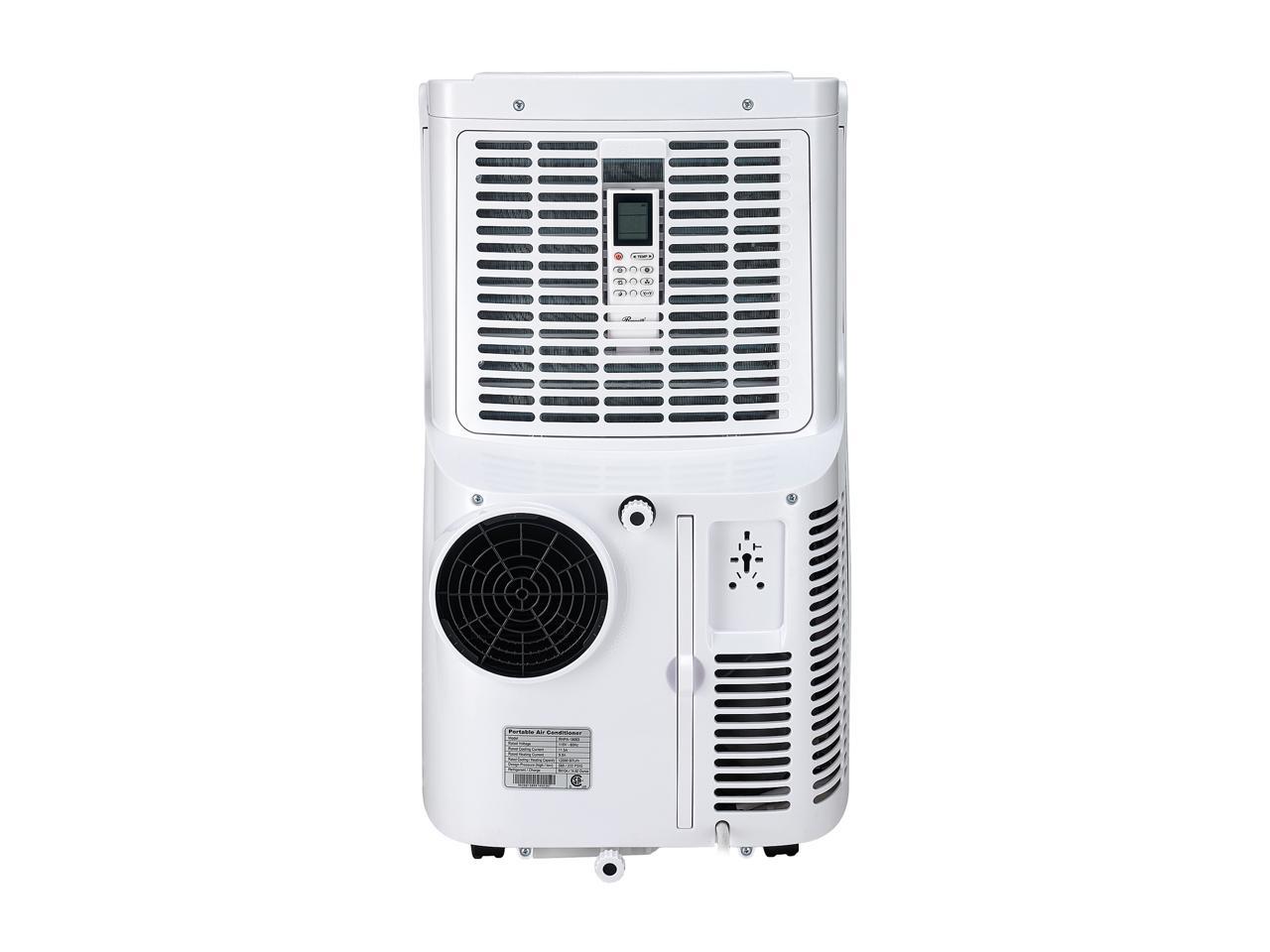 MULTI-PURPOSE USE, ALL YEAR ROUND
Air Conditioner Mode

Removes moisture from the air to cool down and prevent mold and dust mites in your room.

Easy-roll caster makes moving unit from room to room seamless.
Swing function spreads cool air where it is needed most.

Learn more about the Rosewill RHPA-18003

Pros: I had an 8000BTU that worked hard all day to cool my room. 260sq.ft. Changing out the old one to this one the room warmed up. Once I turned it on it cooled the room down in about 30 minutes. It's actually a heat pump for the heat function. ( Reverses the compressor output) No heat element. Hopefully it will last like my old smaller one has. It's a Rosewill and I trust them a lot. It also has a washable micron filter for the hot-side coil. Not too noisy. It's makes no more noise than a window unit. Operation is straight forward. It cools the room very well (Chilly) but read my cons.

Cons: The air blows out the top instead of the top front. It did not come with any stick on foam strips to seal the window adapter. After a month of use. The read out stays on the temp you set. Only time it shows what the room temp is if unit's off. The thermostat has no differential. So the unit cycles on and off on the set temp. I think it uses the 3-minute safety delay when cycling. The louvers close when off and open fully when on. You have to get up each time to hand adjust them to where you want the air to go. Then if you turn it off you'll have to do it all over again when started. Unless you want it always to blow the air straight up. The screen on the remote should be back-lit. It's not. Will need a light on in the room to operate at night.

Overall Review: The first one I got was damaged in shipment by UPS. Newegg replaced it and had the bad one picked up within 3 days. The makers of this unit should be happy about it but it needs some more design and function work.

Pros: Lots of airflow Timer both for auto on or auto off Air direction can be controlled from straight up to almost straight out

Cons: I don't believe the fan turns off after preset temp is reached, likely because it allows for the water container to dry, but I would like a power saving mode that would switch it off. Instructions are very brief and not clear on what to expect from each mode. The window adapter is not well suited for horizontal windows. I needed to cut a part of the window adapter to adjust it to fit my window, a fact that is not mentioned in the extremely sketchy instructions.

Overall Review: Although the specs mention a room size of 200 to 300 cubic feet, I'm using this in an extremely well insulted garage that's 720 square feet with a 9 foot ceiling, as needed. In other words, I don't run this unless I plan on working in it for several hours. At 95° outside, I won't say it'll brain freeze you, but it does make it comfortable, bringing the temp down to my preset 82°. The fact that it has a heat setting is intriguing, but since I haven't owned this during the winter, I have no idea how that's going to work. My main goal during the winter will be to keep the garage temp above 42, but time will tell if this will be the most cost effective method. It'll probably work for now.

Cons: It's more of a fan than air conditioner. the condenser kicks in for roughly 1 minute every 10-15 minutes then shuts off again. Once the AC function has kicked in, the unit shakes very vigorously and makes very loud noises (kind of like the sound of a classic muscle car from 1970s). In the course of 3 hours on the coldest temp setting and highest fan setting, it reduced the temperature of a 300sqft room by roughly 0.3 degrees celsius. (which honestly could've also been the result of the sunset) The other thing I found disappointing is the fact that the air only comes out of 45% of the opening, the rest of it is blocked. Most ACs have a cover on a portion of the air vent opening but this one has majority of it covered. My AC unit came with a broken continuous drainage valve. NO FREE RETURNS - if you think maybe you'd still want to try this unit, remember that Newegg charges nearly half the price of the AC to provide a return label. No cheap/free return options.

Overall Review: will not recommend. 2 stars as it's got a decent fan and dehumidifier.

Manufacturer Response:
Dear Valued Customer, We are very sorry to hear that the air conditioner is not working properly and we do understand your feeling. We have forwarded your valuable feedback of the air conditioner issue to our product management for review and please rest assured that your feedback will receive the attention it deserves. We will continue improving our products in future. Thank you. For any return within 30 days seller's return period due to non-personal reason, they should be able to provide with the free return label. For any return outside 30 days but still within 1-year warranty period, please feel free to contact us, we would be glad to help with a replacement. Rosewill Customer Care
Joanna G.
Ownership: 1 month to 1 year
Verified Owner
Its ok9/27/2020 9:51:37 AM

Overall Review: -I wouldnt buy this one again

Manufacturer Response:
Dear Joanna, Thank you for your feedback about the operating room size of RHPA-18001. We apreciate that. Rest assured that your feedback will receive the attention it deserves. We will continue improving our products in future. In case you need any other assistance or have any other questions, please contact us and the contact information is below: Technical Support: techsupport@rosewill.com RMA & Warranty service: rma@rosewill.com Phone: 1- 800-575-9885 8AM - 5PM (PST) Monday – Friday Thanks, Rosewill Customer Care
Anonymous
Ownership: 1 month to 1 year
Verified Owner
just never use the dry/dehumidify option8/21/2020 7:18:19 AM

Pros: living in a appt I don't have the option of installing a wall ac and our windows can't fit a standard ac so portable was all I could do AC works fine I generally leave it around 75 as I have a smaller room so this cools it and the hallway outside my room

Cons: I used it for about a month just using fan/ac just fine first time I use dry/dehumidify the unit is full of water after a couple hours included drain stuff doesn't fit properly so water just leaks around it and there was already a puddle under the unit (on top of carpeting so fun) I tried just tipping it to drain onto a pile of towels drained maybe 5 drops then stopped even picking it up and tipping it upside downish onlt got a bit out it's currently laying in my bathtub to slowly drain supposed to be 90 today... no included insulation for the window mount so I am using a extra blanket I had lying around and had to tape the exhaust hose bracket to the window mount to stop it from popping out

Overall Review: goes on sale every now and then if you spot it go for it because you can spend the savings on decent hardware

Cons: It's pretty loud when the AC is running

Overall Review: I would recommend this to anyone who needs a really effective AC/heater combo that can be programmed and placed in a static location. It keeps the entire top level of my townhome really comfortable without running all day and night. The remote works fine, the controls are easy. This is a great deal for the price. The only drawback is that the sound can be prohibitive if you're using this near a workspace where a mic is in use. I had to move it to the other side of the room so it wouldn't drown out my normal speaking voice on conference calls.

Pros: It is easily moved where you want it. I works very well and cools where I need it too. It has an LCD remote that lets you control the unit without having to be right at it. It was easy to unbox and get installed. It's not any louder than the window unit I replaced with it.

Cons: While it's running it only displays the temperature you set; when it's off it displays the room temperature. The window sealing plate assembly was slightly too big for my window so i had to cut off about 1/3 to 1/2 an inch to get it to fit in my window. I looked after I had the problem and couldn't find any mention of the size window it would fit but it will definitely fit a wide or tall one easily. It did not come with the foam window seal you need for a double hung window.

Overall Review: I had a window AC die on me and was hesitant to buy another since I'm not sure how I'll get it out and disposed of. I'm not that old yet but the one that died had lasted over 15 years and hopefully I'll get at least 10 out of this one. I'll be even more in a quandary about what to do then. This one will roll out to where you need to get rid of it from. So far I'm very happy I bought this unit. If I decide i want to move it to another spot in mt house all I have to is pick another window and it's very to move it and put it there. There were some negative comments about the heater mode but hopefully it will perform as well as the cooling. So far it hasn't been necessary to use the drain tube supplied but the instructions make it seem quite easy to accomplish. I'm looking forward to many years of use from the AC unit I purchased.

Pros: It cools my room to a point and has a remote.

Cons: The main panel doesn't work so I permanently have to use the remote to control it. It BARELY cools my tiny room. I'm paying almost 300 for a piece of garbage I can't afford to return because it's too hot and took so long to deliver.

Overall Review: Would NOT recommend.

Manufacturer Response:
Dear Valued Customer, We are really sorry to hear that the AIR CONDITIONER does not work properly and we do understand your frustration. We are glad to replace it for you. Please contact us with your purchase invoice to claim your product warranty. Here is our contact information: Technical Support: techsupport@rosewill.com RMA & Warranty service: rma@rosewill.com Phone: 1- 800-575-9885 8AM - 5PM (PST) Monday – Friday Rosewill Customer Care