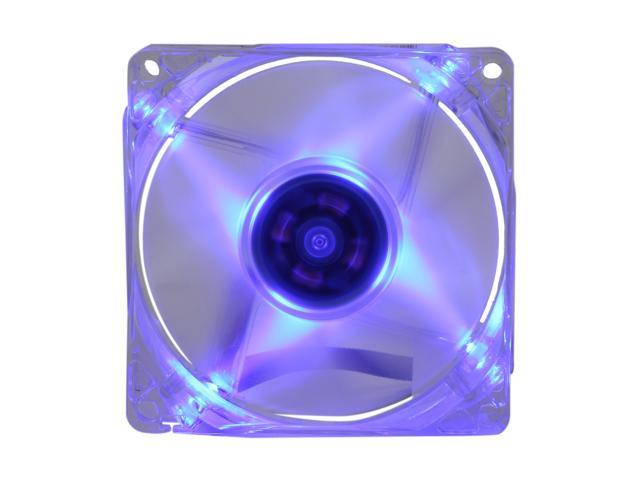 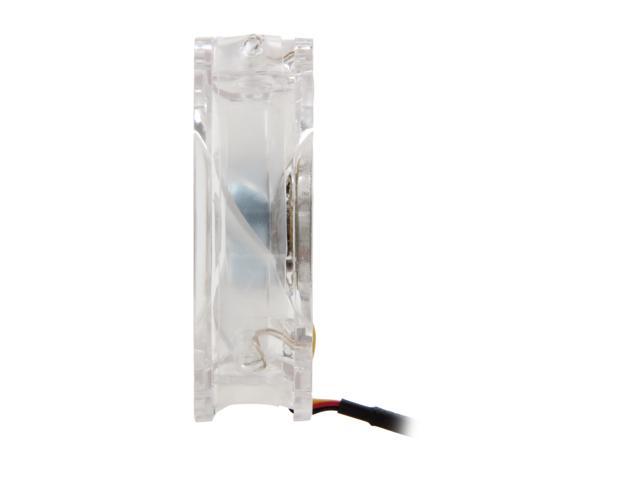 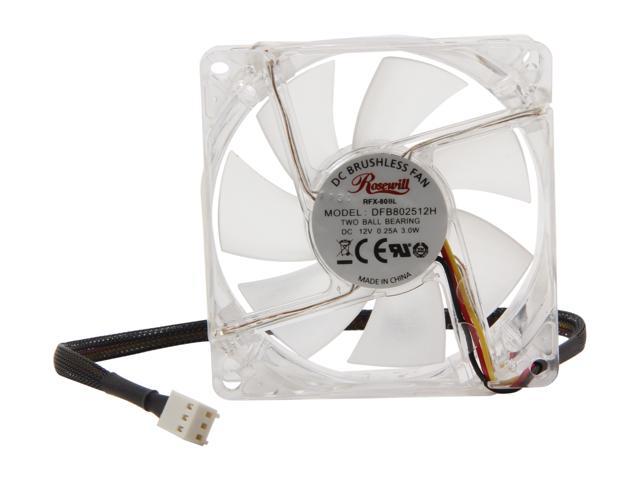 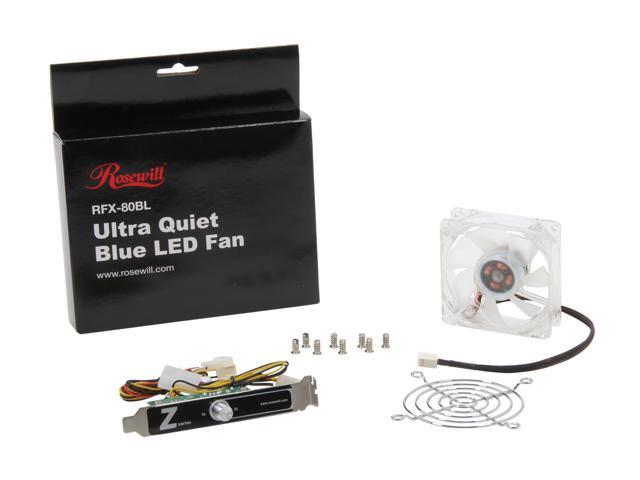 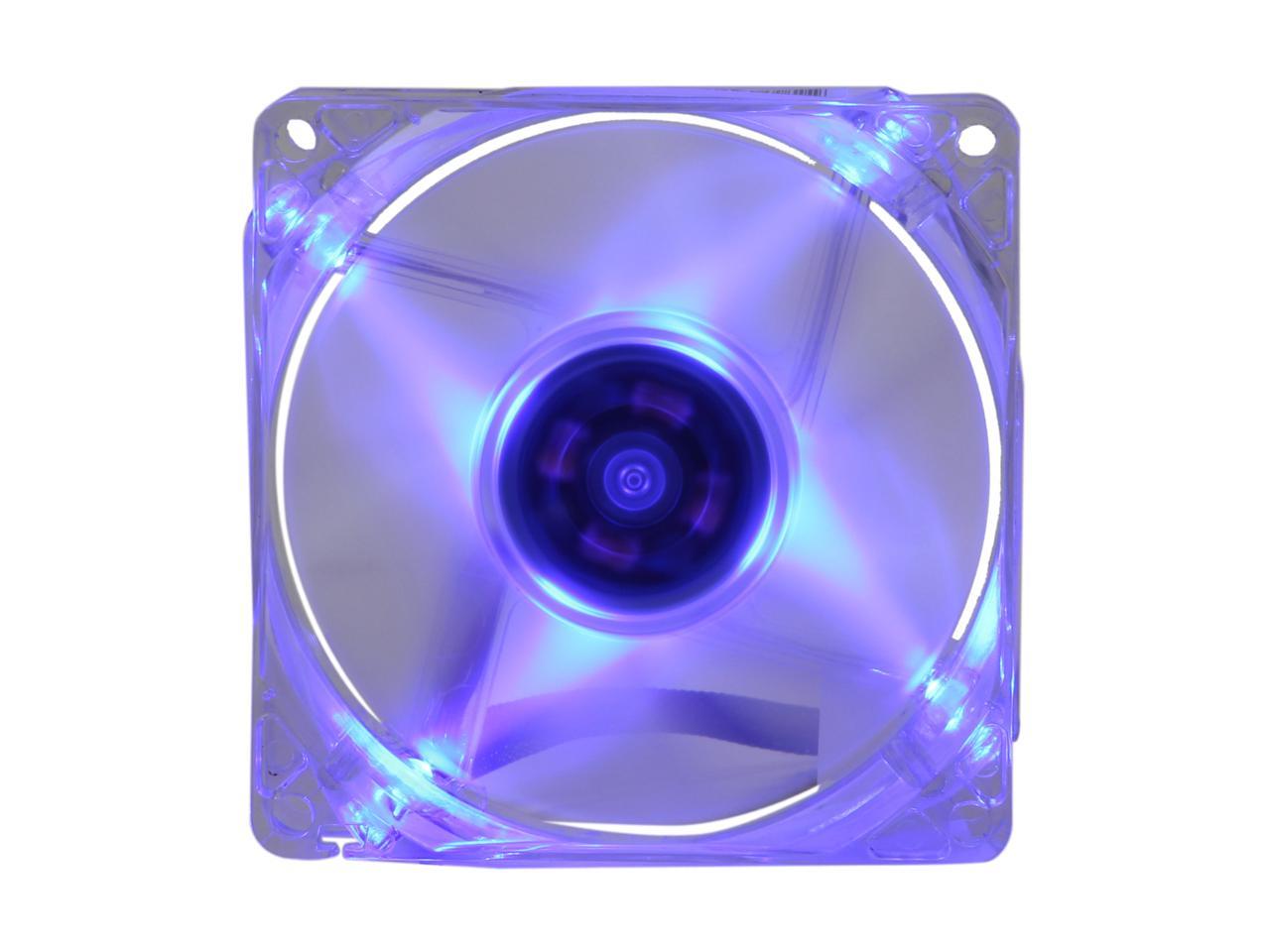 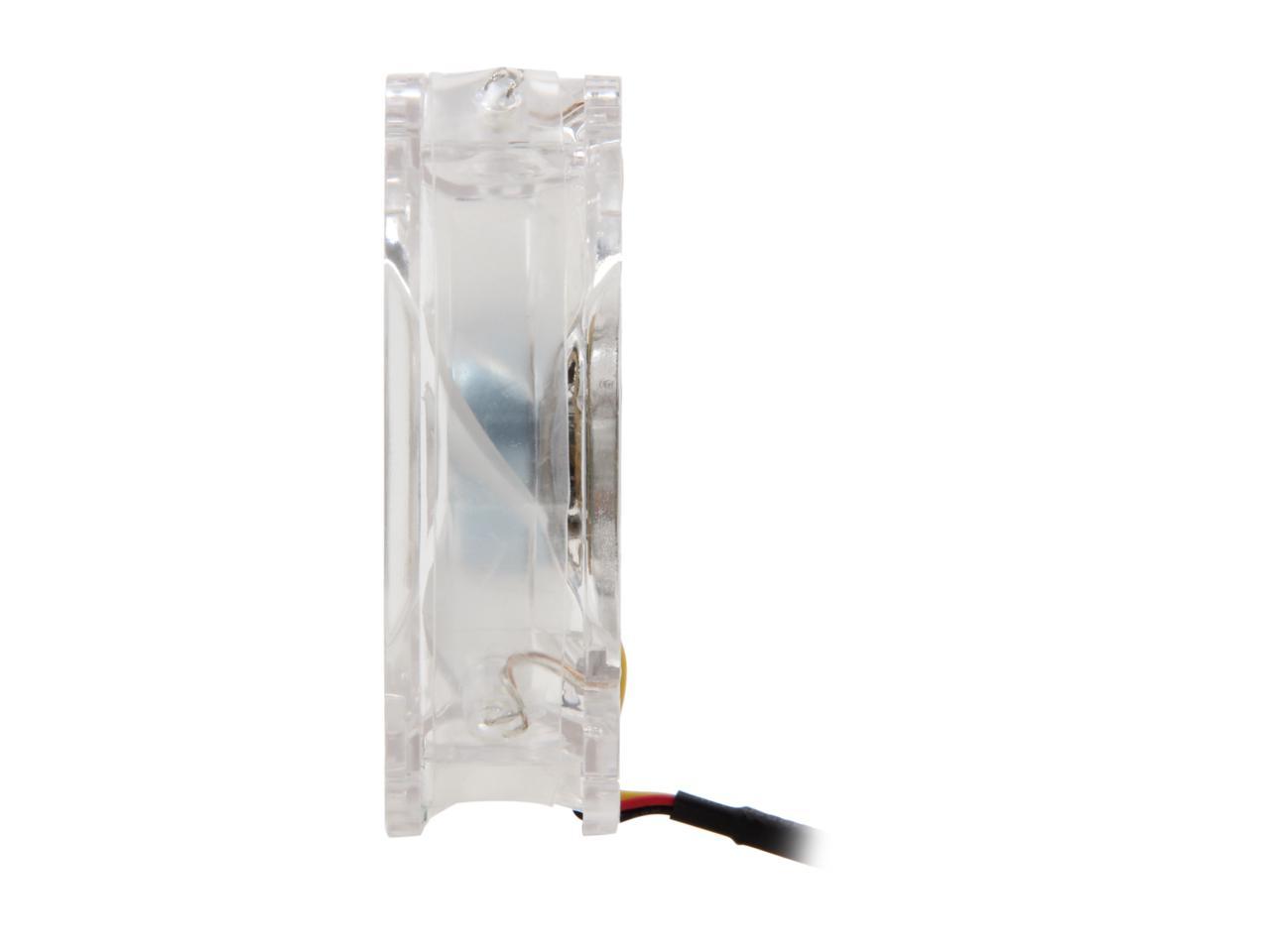 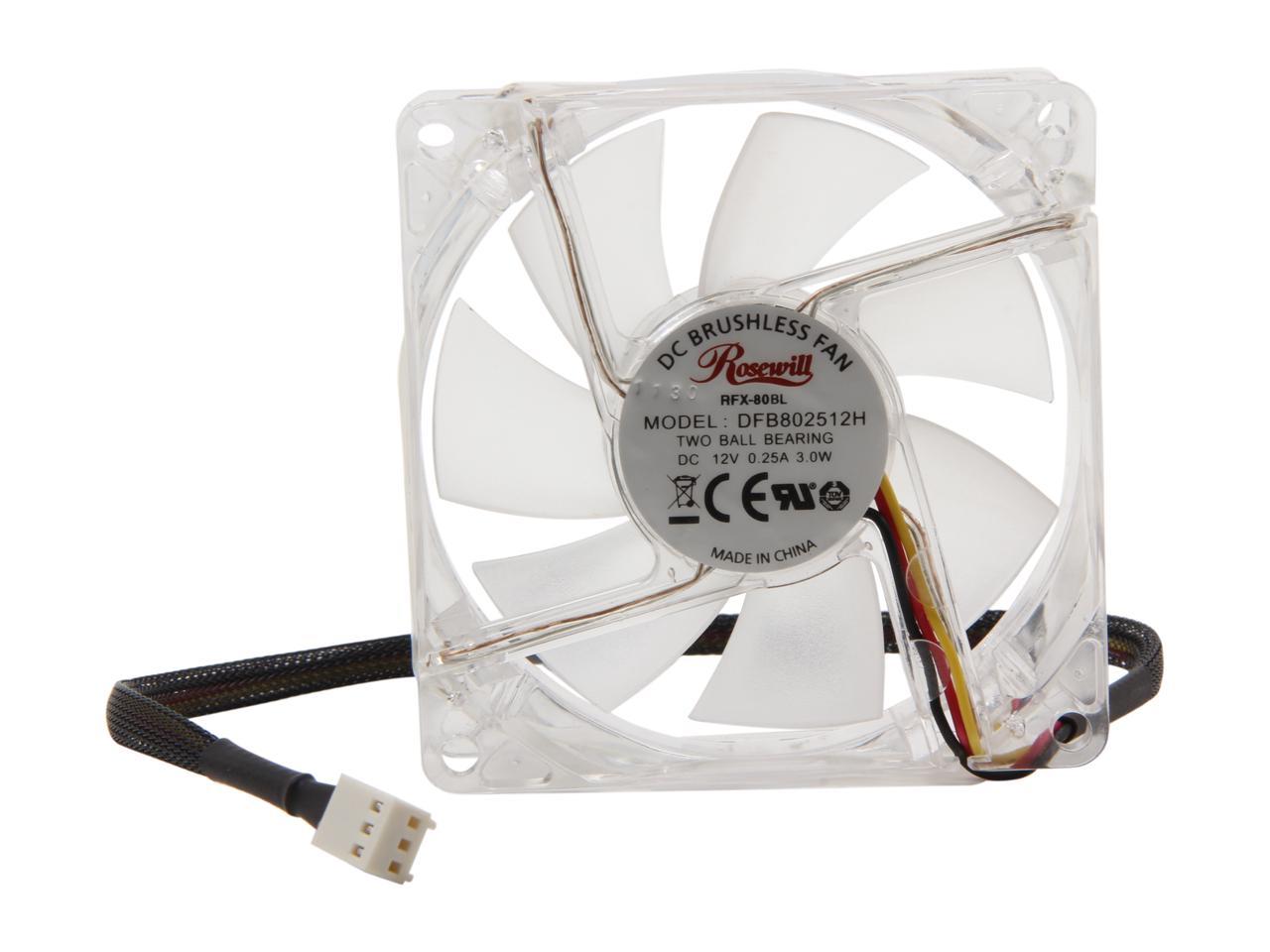 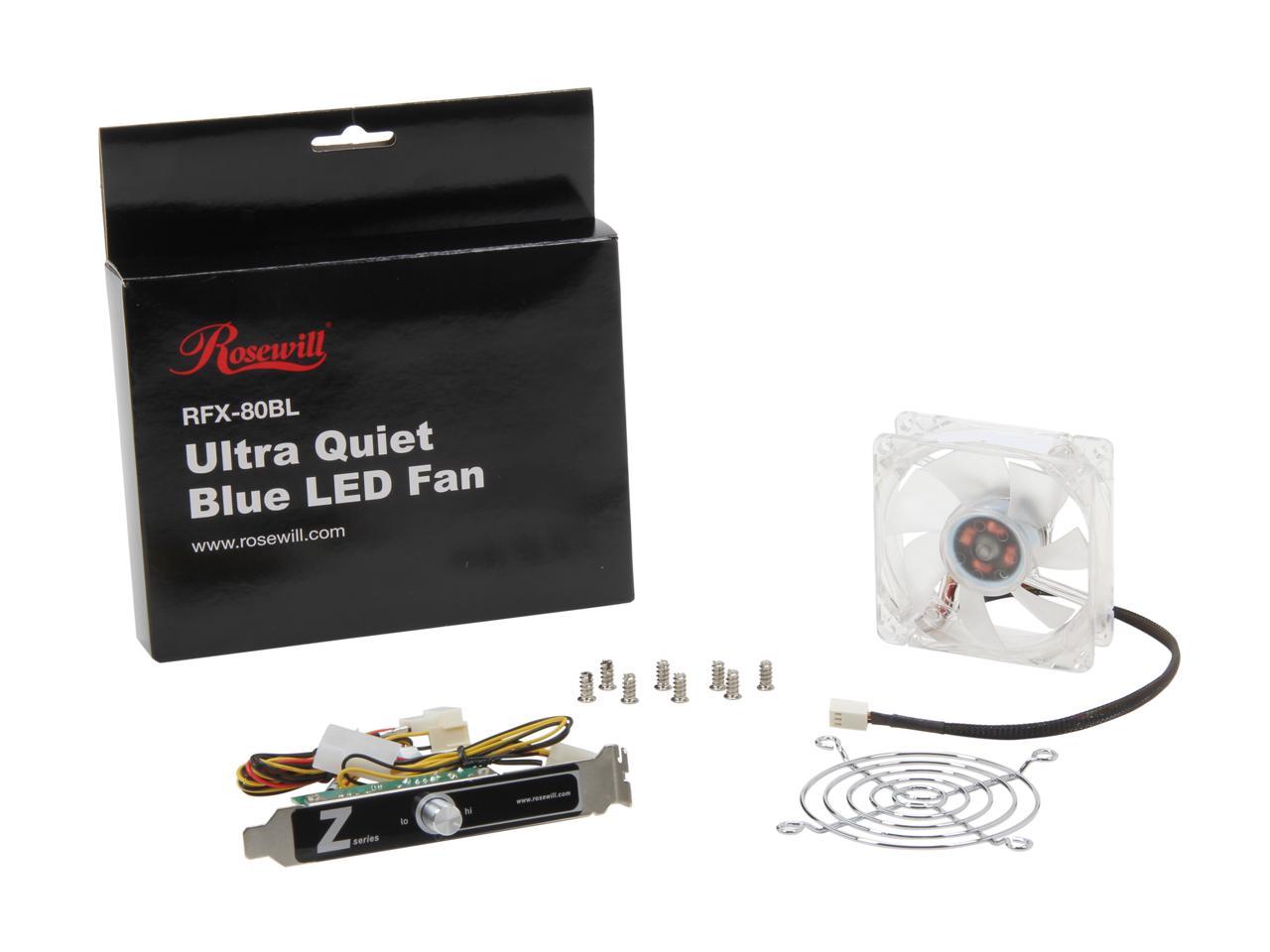 (264) Write a Review
OUT OF STOCK.
Fees for brokerage and duty included in price.
Specs
Reviews

Learn more about the Rosewill RFX-80BL

Pros: I have purchased a good handful of these fans and they are decent. I have a few that have been running almost 24 / 7 for over a year or 2 now. They have not failed or done anything out of the ordinary. The airflow on these fans is decent and they seem to have a decent amount of air pressure as well The blue lights are nice, very few LED fans are also fitted with Ball-Bearings which makes these awesome in their class. They come with a grill, a controller and screws. Old reviews might say the screws were useless but they started packing them with the right screws.

Cons: Some may say they are noisy. There was a LED color inconsistency in a few of them.

Overall Review: I notice alot of people complain about the controller. Maybe I will do a short video review on it and show anyone curious the dos and don'ts of hooking it up. The screws are self-tapping. They may be initially hard to drive in because they have to cut a path into the fan's plastic for the thread to grab onto. Almost all new fans are like this. It's nothing to complain about, just take your time installing them, plain and simple.

1 out of 1 people found this review helpful. Did you?
chris r.
Ownership: 1 month to 1 year

Overall Review: FYI- you dont have to use all the extra wire it comes with can just unplug it from controller and plug fan right into controller for less clutter.

Pros: Very cool color from the LED lights. Good air volumn and the controller is excellent. I used Newegg's item #N82E16812189063 to use one controller for two fans and it worked great.

Cons: Helpful hint. Fan case will break if you over torque screws. See other thoughts.

Overall Review: Be careful when using the enclosed screws to mount. Fan case will flex and if you torque too much will crack fan case. Just hold fan in palm of hand to support fan case and screw the screws in a little at a time and back out and then back in. This will allow the screws to cut the threads into the case holes.

Pros: This fan definitely delivers the rated airflow without an excess amount of noise. Add a set of rubber/silicon fan isolators to reduce the drone to acceptable levels even at full blast. the fan controller gives more than adequate control of RPM's and noise which is nice given the price point.

Cons: The fan controller takes up a PCI slot, so keep that in mind if you are short on expansion slots.

Overall Review: The LED's are a pure blue and vary with the speed set by the controller. i have installed several of these fans in multiple cases and all have continued to perform beautifully. excellent buy with the included fan controller, they also work just as well plugged into the motherboard fan connections since they have standard 3-pin plugs this is an option if you elect to not use the fan controller for whatever reason. i'll be buying more of these to use as case fans and just keeping the controllers around for other fan installations since at this price (including shipping) the fan controllers alone are worth the cost!

Cons: Silent only on the very lowest setting Inexpensive

Overall Review: Use mine to get the air from under the closed kitchen cabinet (built in desk) where the PC is stored. The fan is not inside the PC case, I snaked the cable out and the fan pushed the air out and it keep the inside of the cabinet at room temperature even with the PC running almost 24/7.

Cons: Not quiet at all. At high speed, it is the dominant noise from the computer.

Cons: Blue LEDs noticeably blink at certain fan speeds. Would not use in PC that was visible.

Pros: -This fan can really pump a lot of air -The control set is great, no connection to mother board needed! -Bright Light-Blue LED lights put my standard blue case fan to shame!

Cons: I've only come across ONE con for the fans. Rosewill at some point stopped giving out the screws showcased in the pictures above. Instead, you get 8 small screws that barely screw into the holes the right way. (These screws are 1/10th the size of the ones in the pic.s) Why? The fan holes are NOT 'threaded' for screws. After speaking with their support center, they told me: "The fan mounting points come unthreaded but once the screws are installed into the mount points, it will then become threaded." Be aware that these screws will barely hold the fan and cage in the correct position until All screws are in. The screws will also Not go in straight! (-1 egg for this)

Overall Review: Despite the screws not being good to accommodate the fans, they are REALLY nice fans. It's definitely worth it to buy the controller set too!