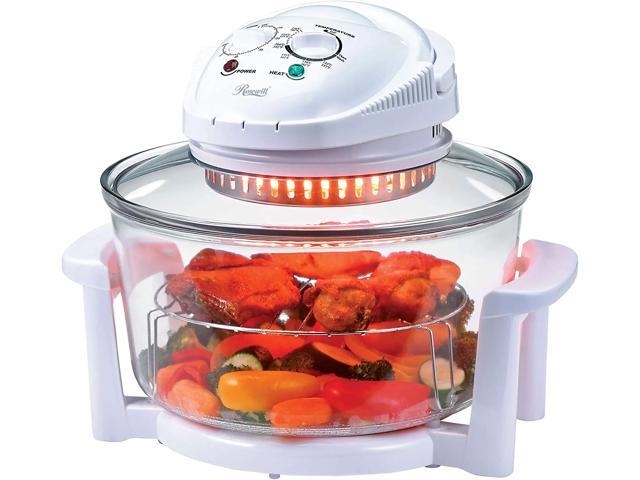 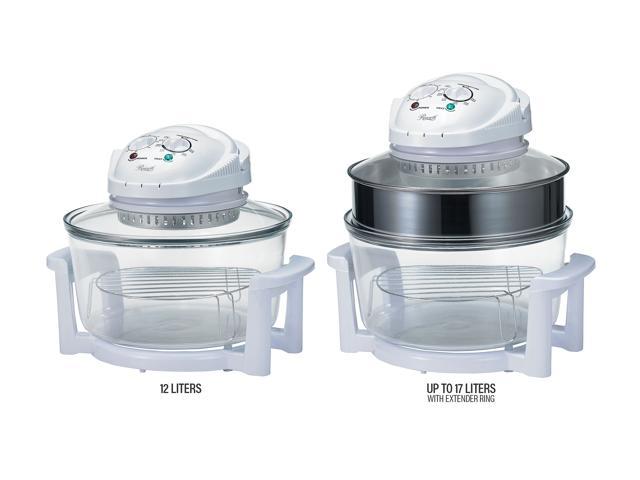 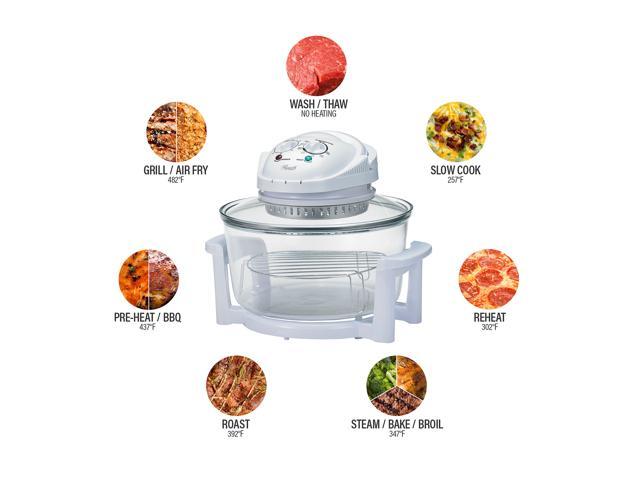 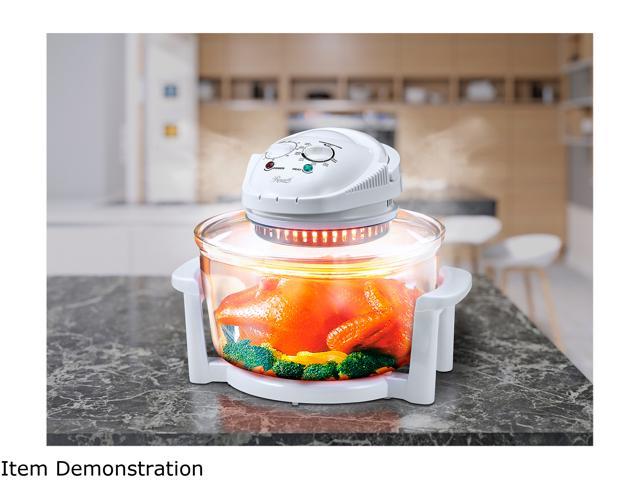 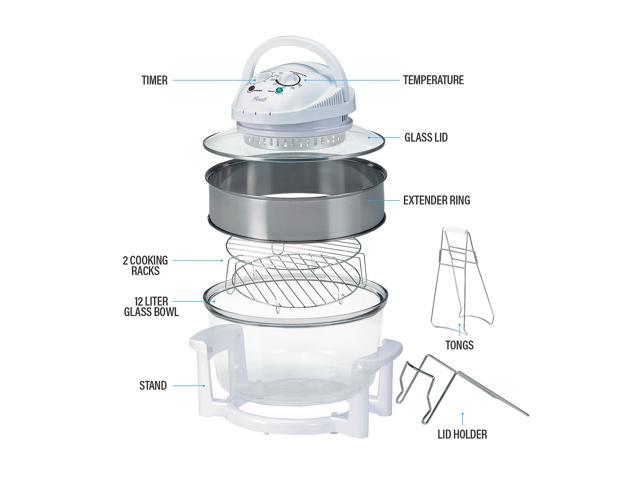 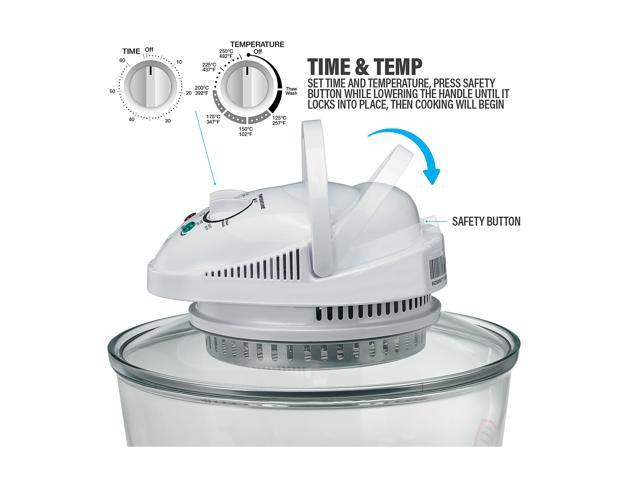 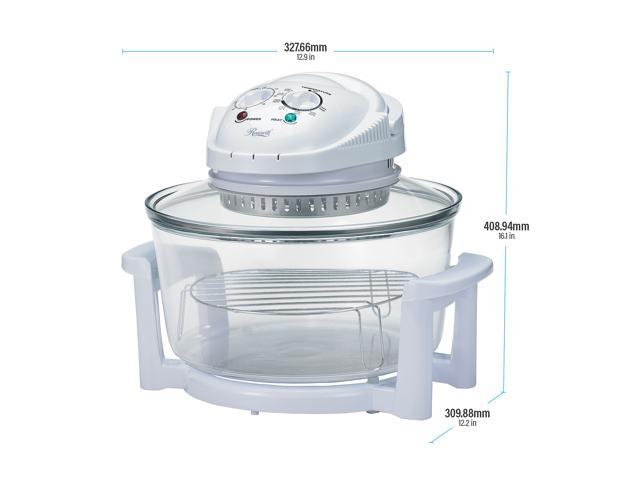 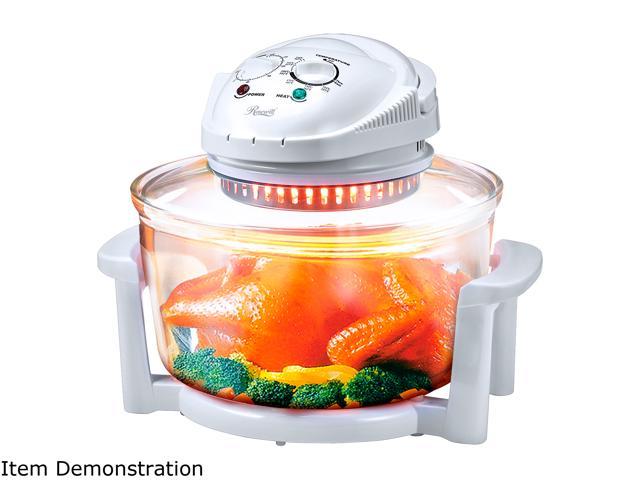 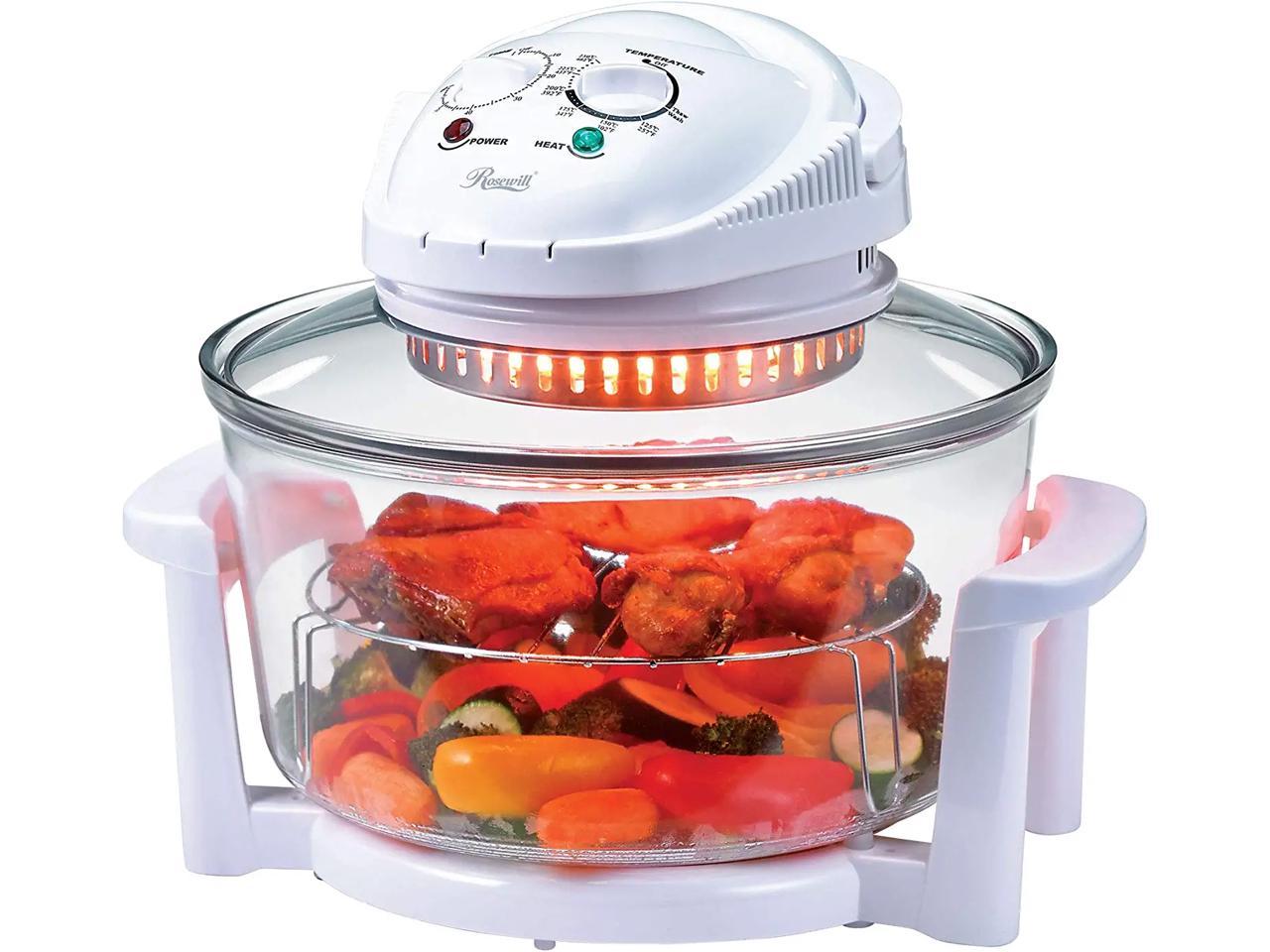 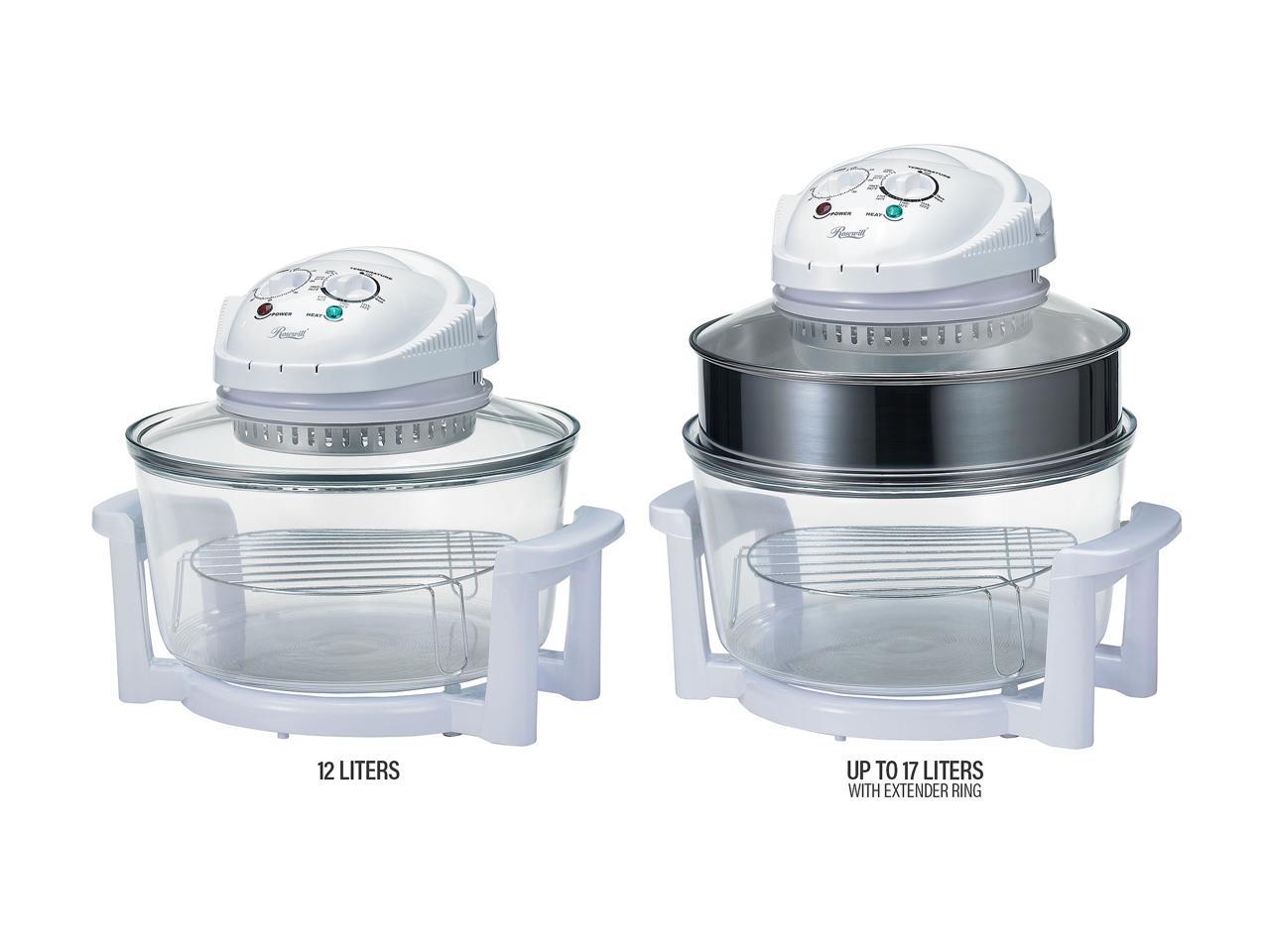 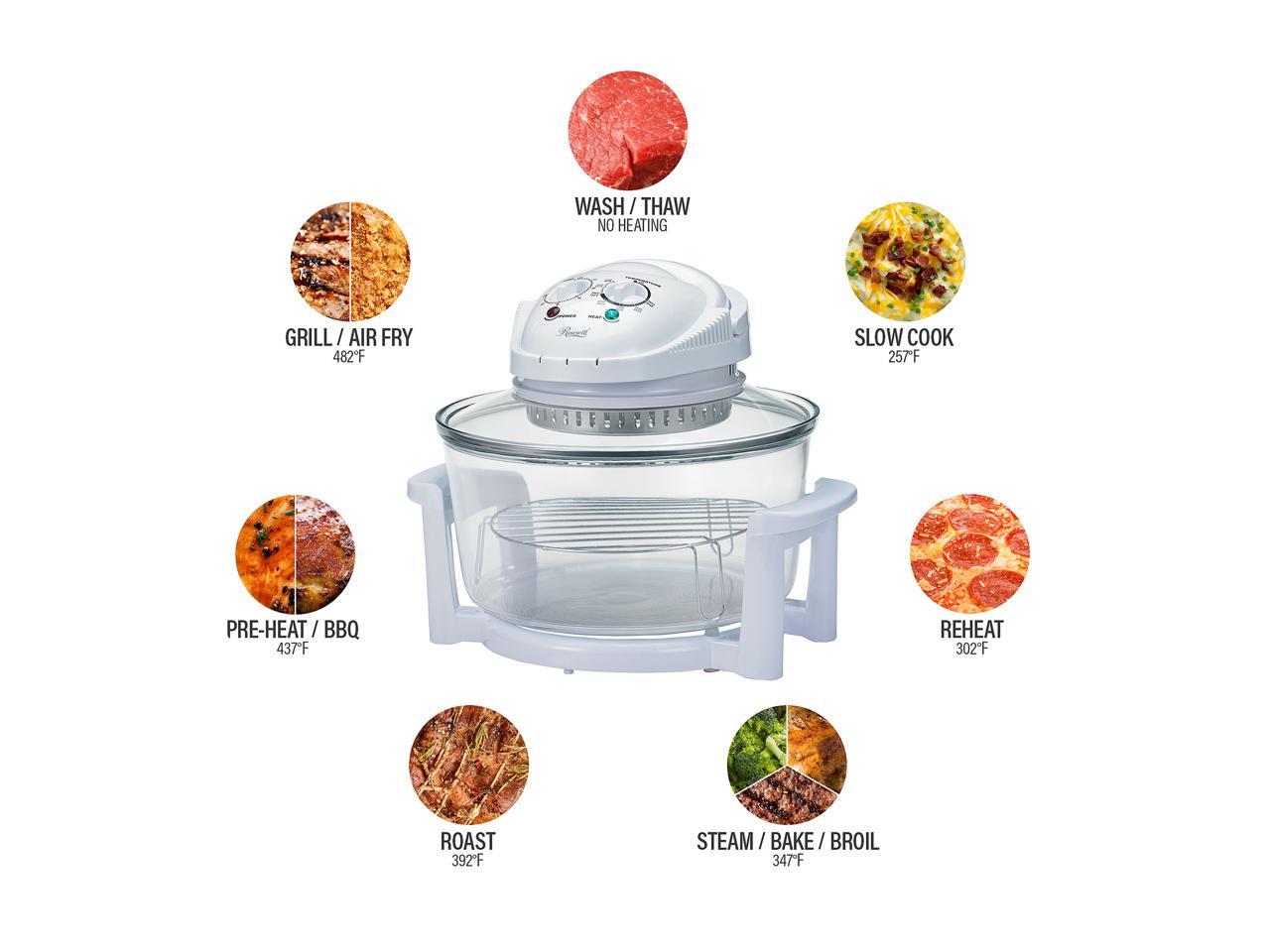 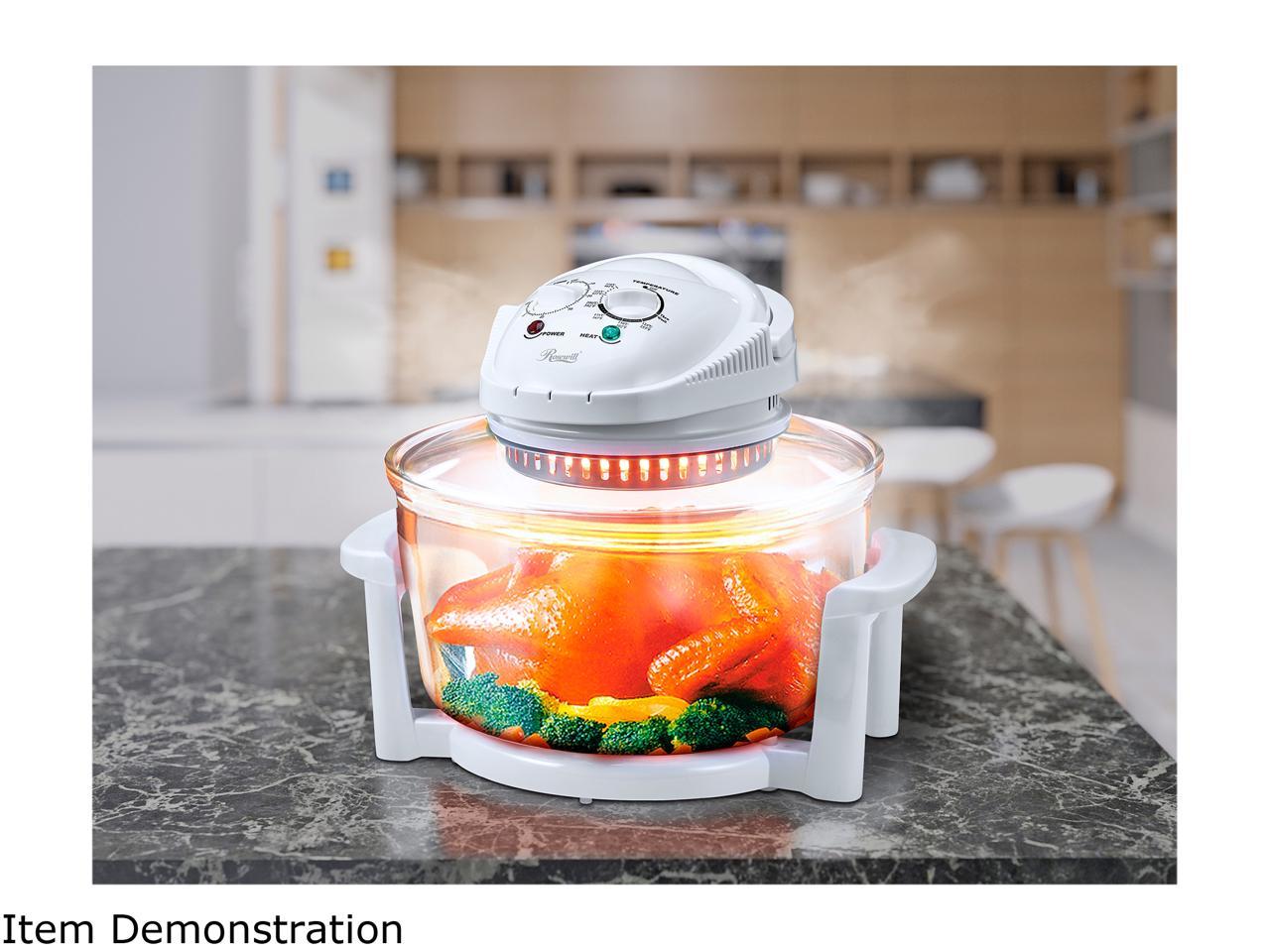 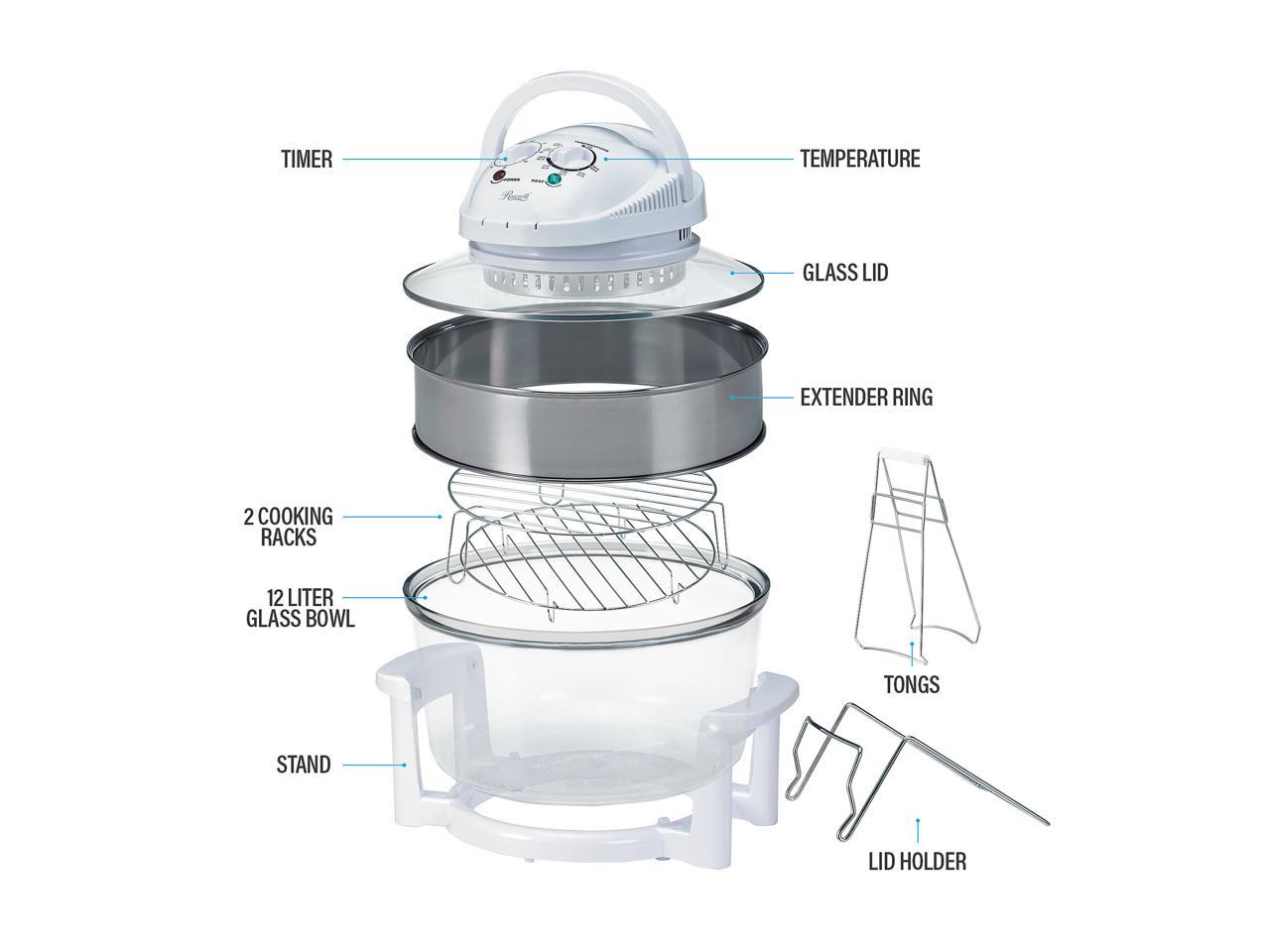 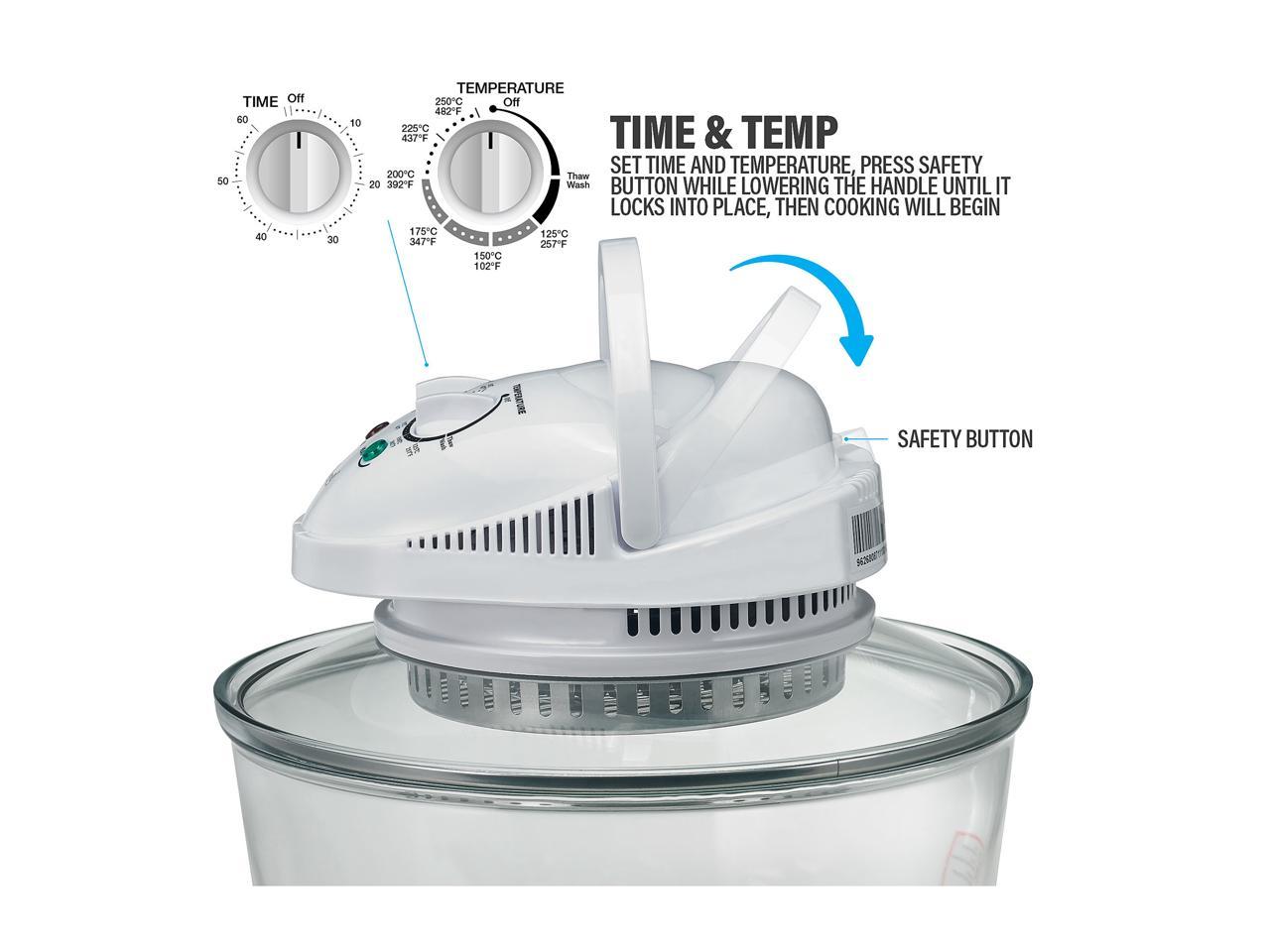 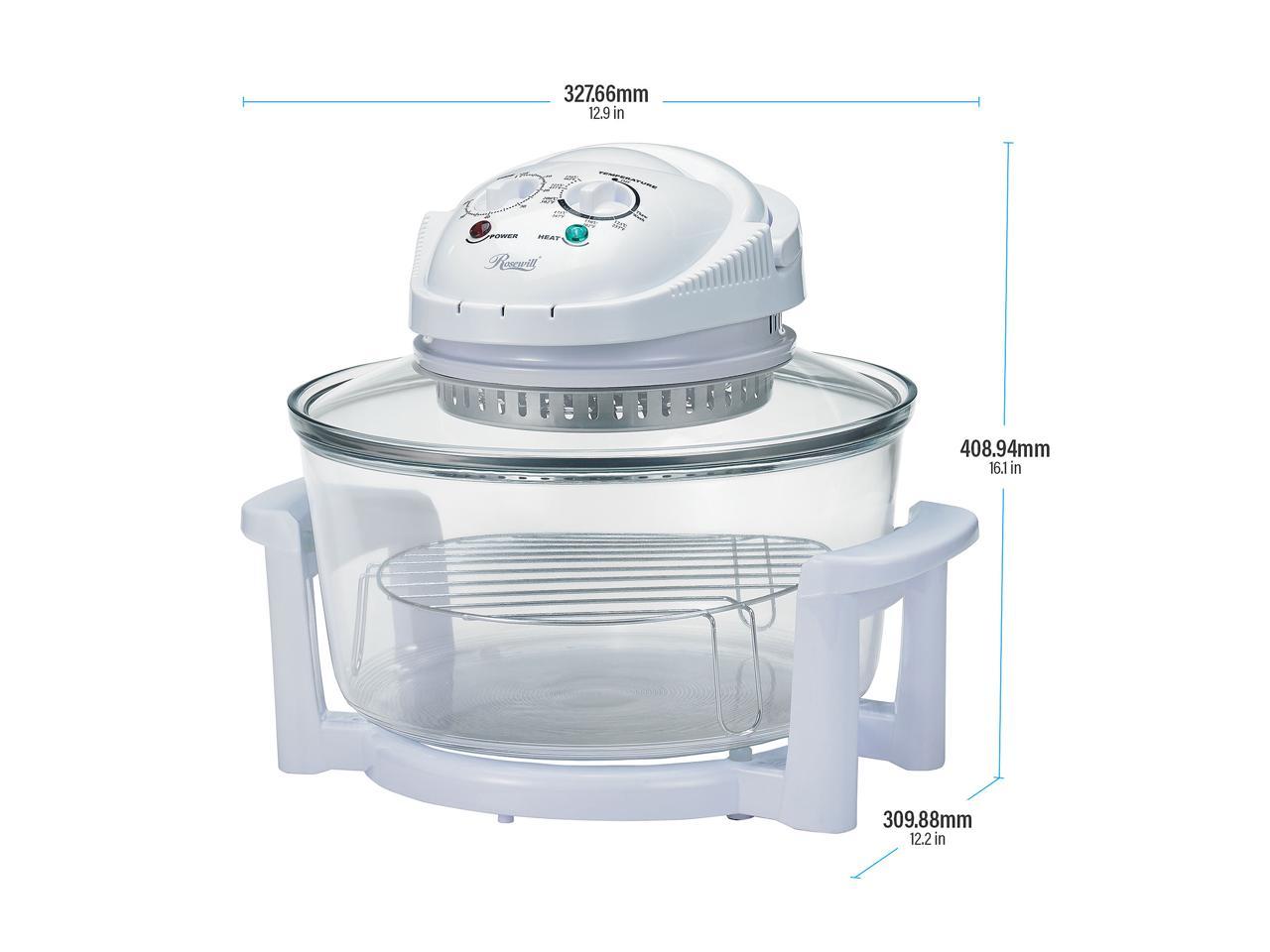 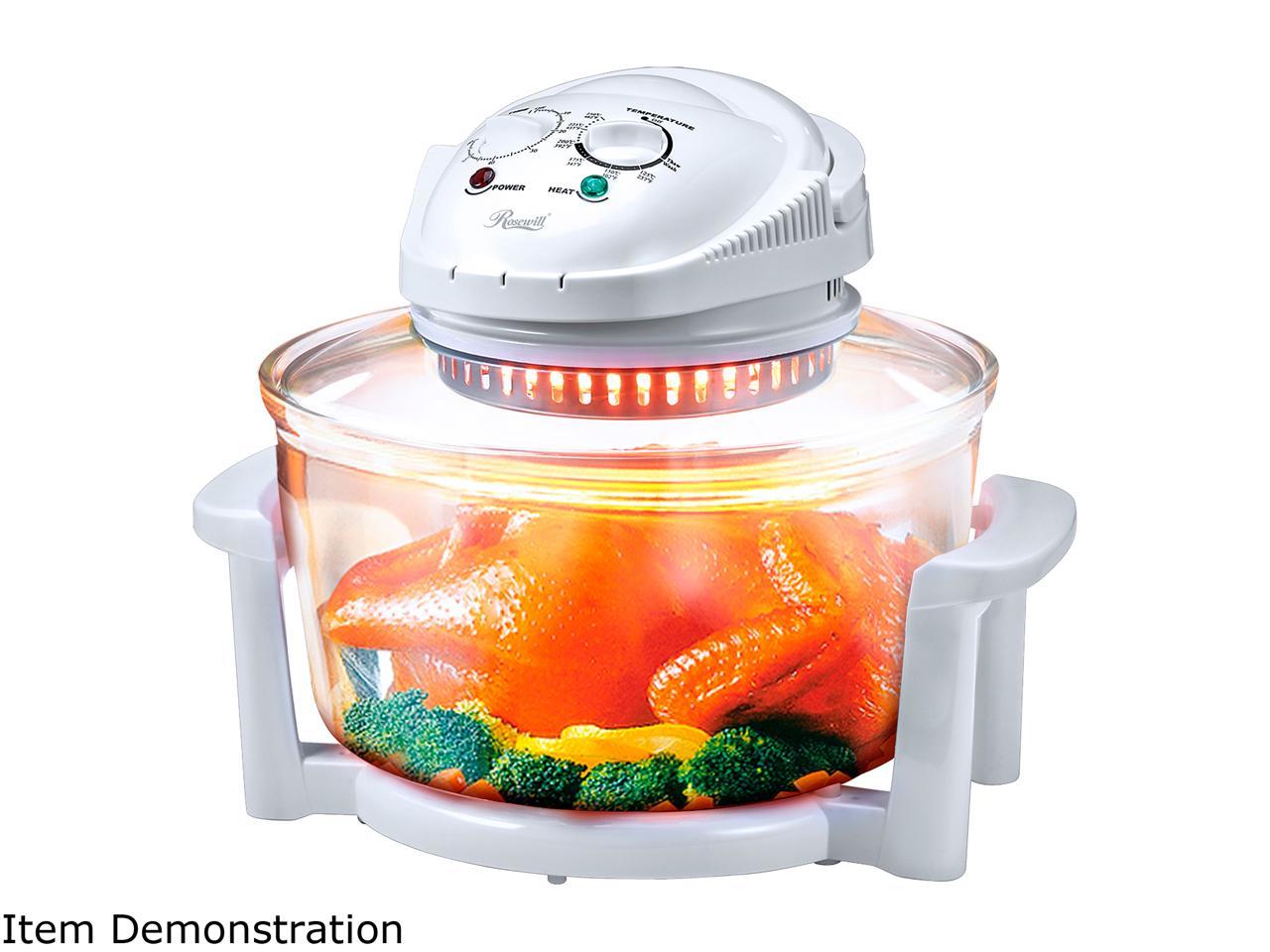 This innovative cooking appliance does everything a conventional oven can do, but faster with substantially less power consumption and better with a variety of functions, including: roast, bake, grill, deep fry and more. Halogen convection technology sears food to a crisp brown on the outside while maintaining juicy tenderness on the inside. Hot air circulates evenly, resulting in quick and thoroughly cooked gourmet meals. STACK UP FOR MORE

Includes tongs, 2 stainless steel cooking racks for up to 3 layers of cooking and an extender ring to increase total capacity to 18 quarts for larger-portion meals. Grill on the high rack or roast/bake on the low rack. With two dial controls, simply set the cooking time and temperature, or reference the cooking chart on the lid. Cook foods to perfection while monitoring progress at all times through the transparent glass bowl.

Cons: Life expectancy of the halogen bulb, and it is not replaceable.

Overall Review: I purchased this oven about 9 months ago. The halogen bulb recently burned out and I contacted Rosewill for warranty replacement. Both Rosewill and NewEgg's customer service assistance was outstanding on this oven, immediately issuing an RMA for replacement. However, after packaging it up and taking it to my local Postal Center, I found out that the least expensive shipment from where I live in New Hampshire to NewEgg's return facility in California would be about the same as what it is now on sale for (it weighs a lot). So I told Rosewill I would not be shipping it back. The problem with this oven and other manufactures that make similar is that it only uses a halogen bulb for the heat. The bulb is not designed to be replaced (hard wired in). And after some internet searching, I found that for all of them, the bulb does not last that long. Which means these type ovens will be tossed in to a landfill once they stop working (you might be able to use the glass bowl as a planter though). I did recommend to Rosewill that they update the design to have a replaceable halogen bulb, much like that are in torch air lamps. Rosewill told me they took my suggestion seriously and it will be looked in to. While the oven worked, chicken especially came out outstanding. All of the fat would drip out of it, and the skin would become nice and crispy. A big negative though was standard sized frozen pizza would not fit in to it. The glass bowl is tapered with the top being the widest. I could squeeze a frozen pizza in to the top cooking tray, but the sides would completely seal off any of the hot air from getting underneath. So trying to cook a frozen pizza in it is worthless. After seeing the Nuwave infomercials on TV, this is something I wanted to do and was disappointed when I found the Rosewill could not. The Nuwave cooks on a wide tray at the bottom of it, so can accommodate a frozen pizza. For the price, if you want to cook chicken or any other kind of meat where the circulated hot air can surround it, the oven works great. Just be prepared for the day not that far in the distant future where when the bulb burns out, and you have to throw out the entire oven. And I gave the oven a 2 star review because of that. However, I give both Rosewill and NewEgg customer service a 5 star rating.

Manufacturer Response:
Dear Stephen, We apologize for the inconvenience you are experiencing with our product. The life expectancy for the halogen light bulb is 6000 hours and shouldn’t burn out so soon with normal use. We will gladly assist you with a resolution to your issue based on our RMA policy. Please contact us so we may assist you as soon as possible. If you have any further questions or concerns, please let us know. Thank you for choosing Rosewill. Sincerely, Rosewill Support Email: rma@rosewill.com Email2:techsupport@rosewill.com Call Center 1-800-575-9885 Monday - Friday 8AM - 5PM PST
Victor C.
Ownership: more than 1 year
Verified Owner
truly YMMV12/13/2016 7:54:52 AM

Pros: Works great for the price.

Cons: Limited life expectancy. 2nd unit does not get as hot as first one purchased. Cheaply made.

Overall Review: My 2nd unit in 3 years. Replaced bulb once on first unit then no longer lights up but fan runs. Each time about a year between failures. 2nd one purchased for a year now, still going! Maybe i got lucky on the 2nd one lol.

Pros: Works great cooks my bacon in about 10 minutes which used to be a 30 minute task in the oven, I love to crisp up leftovers as well. Cooks fast efficient easy to clean.

Pros: Easy to use

Overall Review: Bought this oven in Sep 2016 and the bulb crapped out on 2/1/17. The product looks nice, wish its quality was as nice as its look.

Manufacturer Response:
Dear Valued Customer, We are really sorry to hear that the bulb is dead and do understand your frustration; If the item is still within its 1-year manufacturer warranty, you could contact us to claim the warranty with your order invoice; We do care about your feedback and will continue improving our products in future. Phone: 1- 800-575-9885 Email: rma@rosewill.com Email2: techsupport@rosewill.com Thanks, Rosewill Customer Care
Anonymous
Ownership: 1 month to 1 year
Verified Owner
So so quality, good attitude10/2/2016 8:08:19 AM

Cons: My first one doesn't work well, replacement just comes and works normal so far, 2 weeks passed. Although delivery is fast, discussion in between took long.

Cons: they last about a year or maybe two, so have to buy a replacement every so often the inner metal to hold the food up is a bit badly design and doesn't have good balance

Overall Review: outside is hot. becareful

Cons: carrying handles are not sturdy. literally uses a halogen bulb. Some of the energy leaks out as visible light so there's some efficiency loss. It's very bright so we use the extender ring as a reflector. I question the lifetime of the bulb vs a more standard resistive heating element.

Overall Review: I had a previous version of this model that worked great and hoped this would perform the same. However, it is not the same and not quite as good. The new metal shield that is added to the heat source is preventing the force of air and the heat of the element to transfer to the cooking area. This results in longer cooking times, heat leakage around the unit is very noticeable versus the old unit having to use full power where before it took only half of that amount.

Manufacturer Response:
Dear Valued Customer, We appreciate your feedback on this product. Rest assured that your feedback about the design of the convection oven will receive the attention it deserves. If you need further assistance on Rosewill products; please feel free to contact us. Here is our contact information: Technical Support: techsupport@rosewill.com RMA & Warranty service: rma@rosewill.com Phone: 1- 800-575-9885 8AM - 5PM (PST) Monday – Friday Rosewill Customer Care