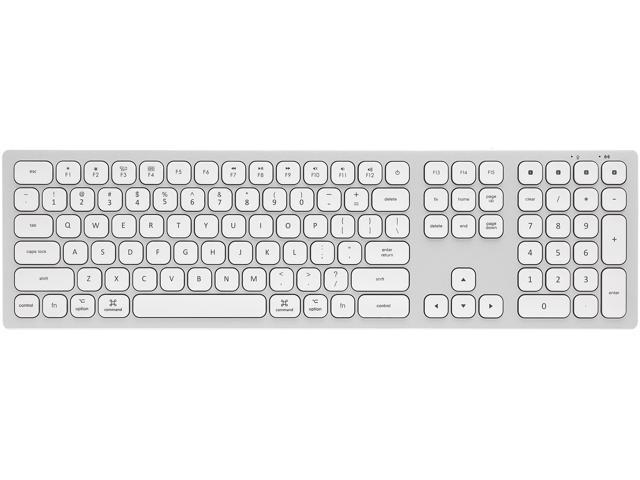 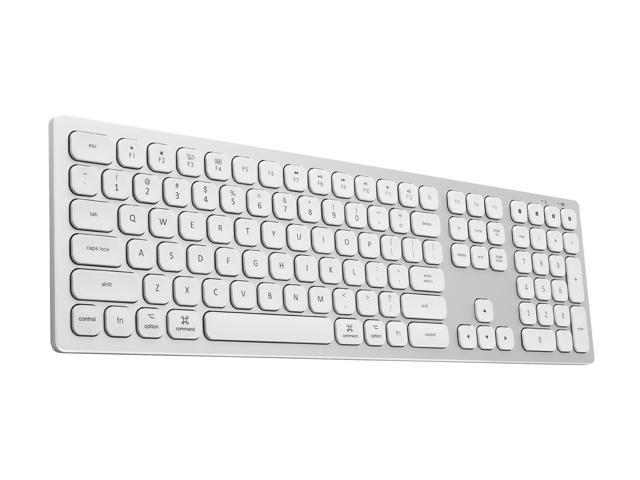 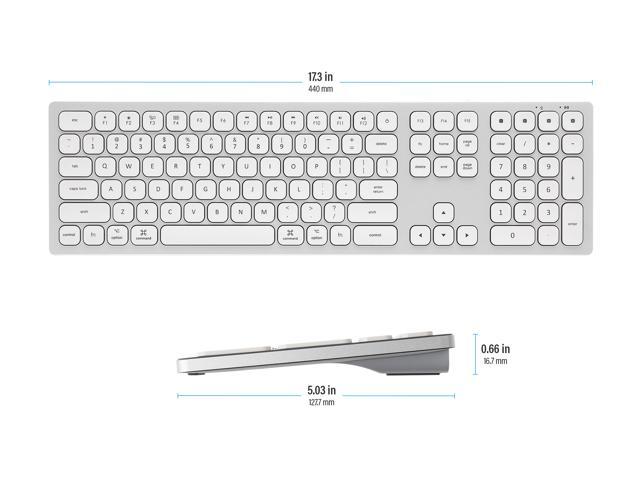 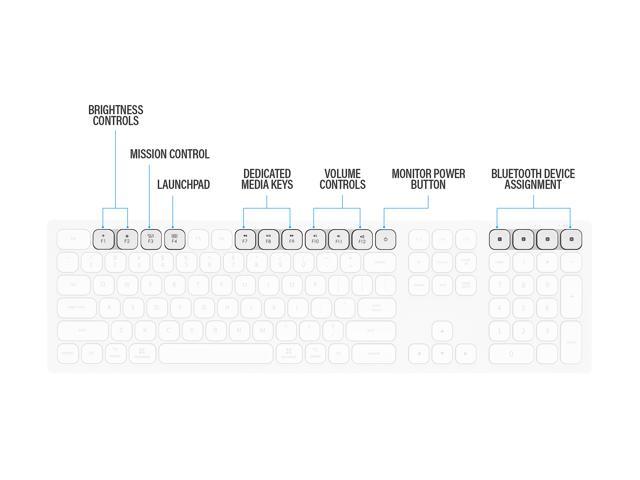 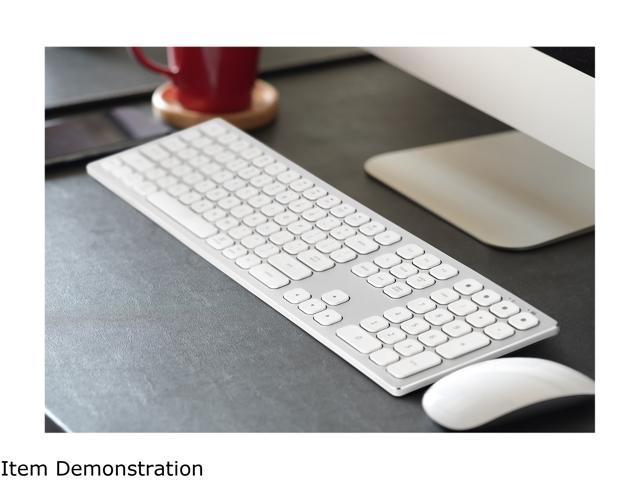 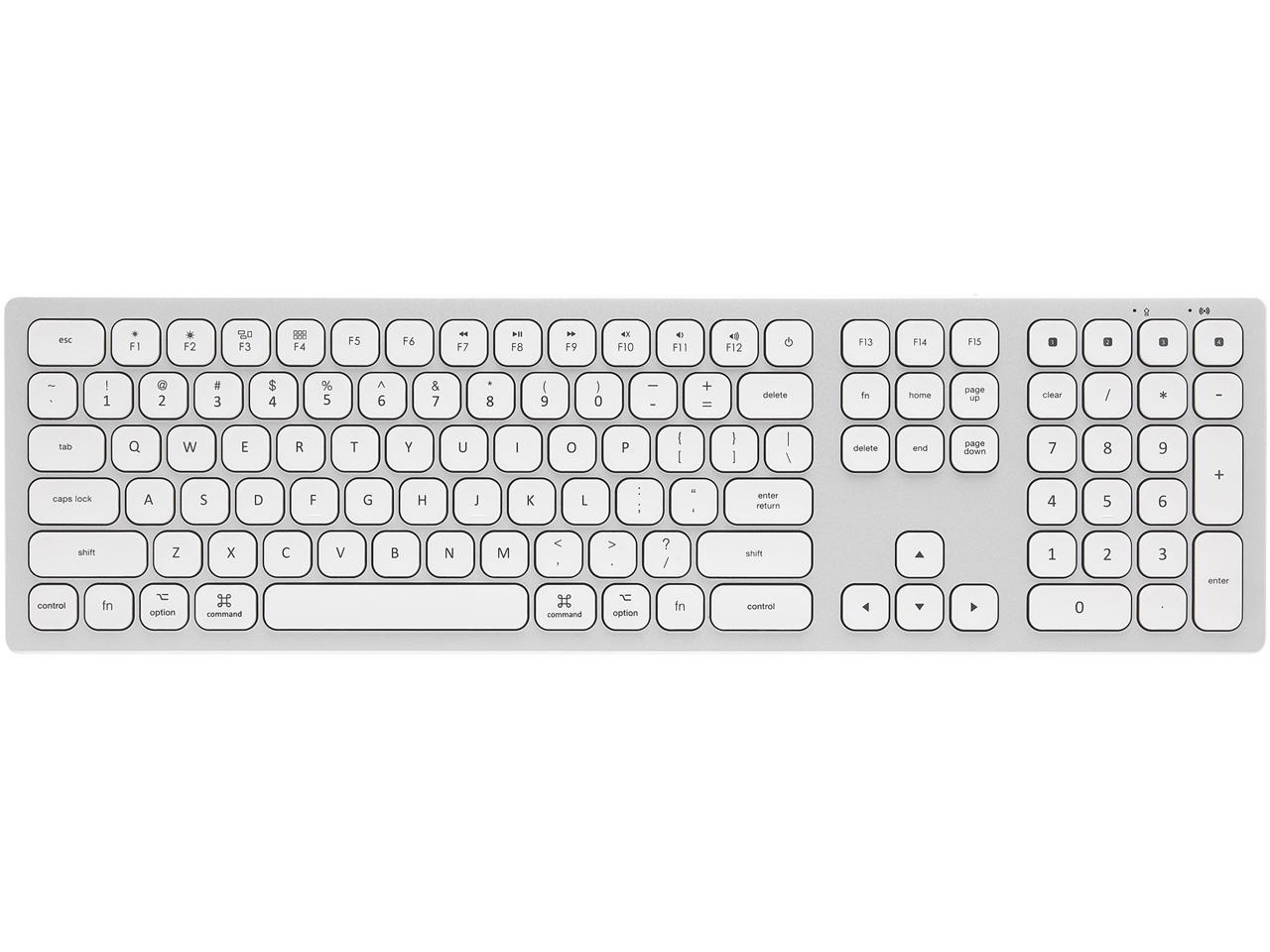 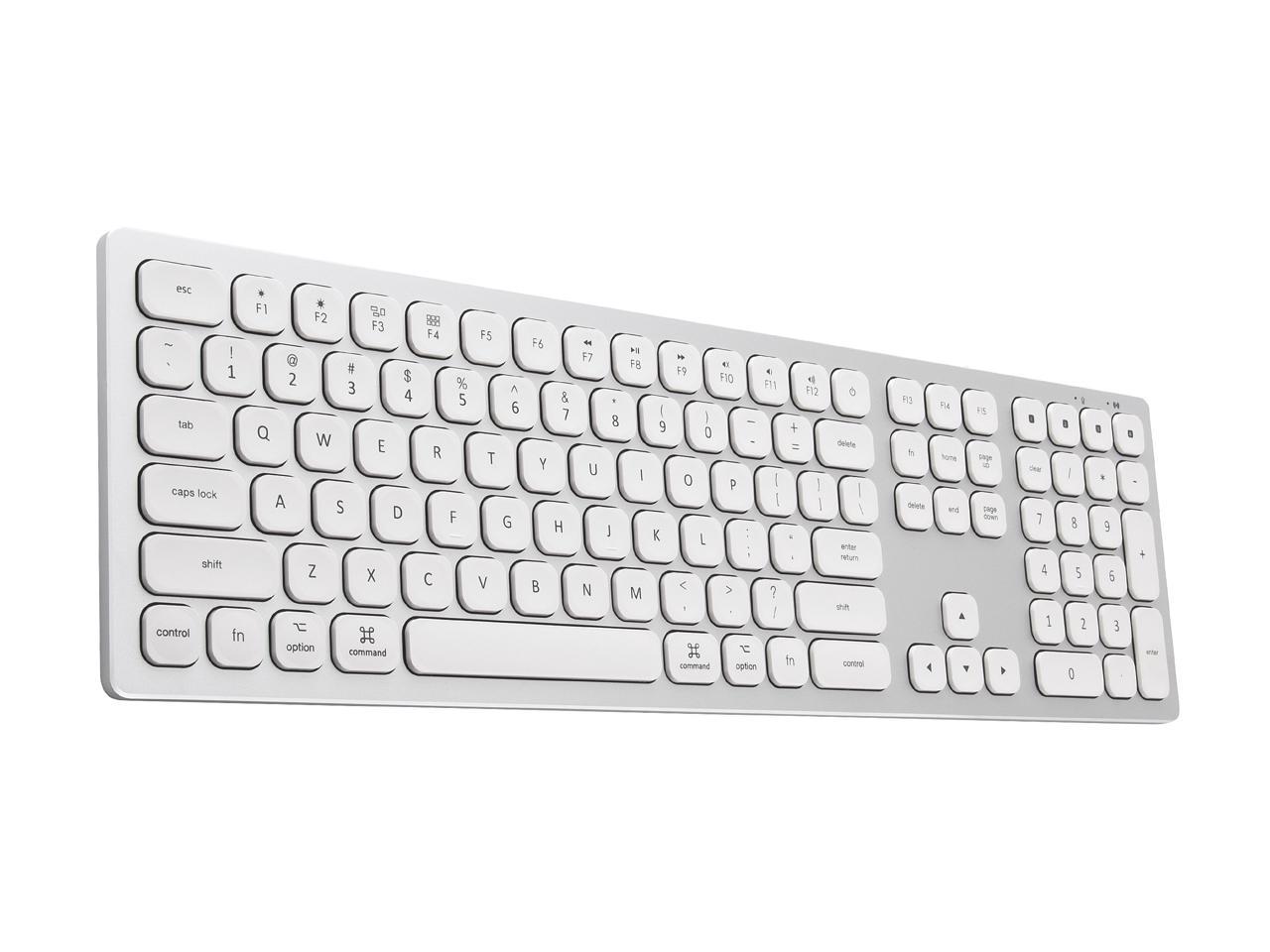 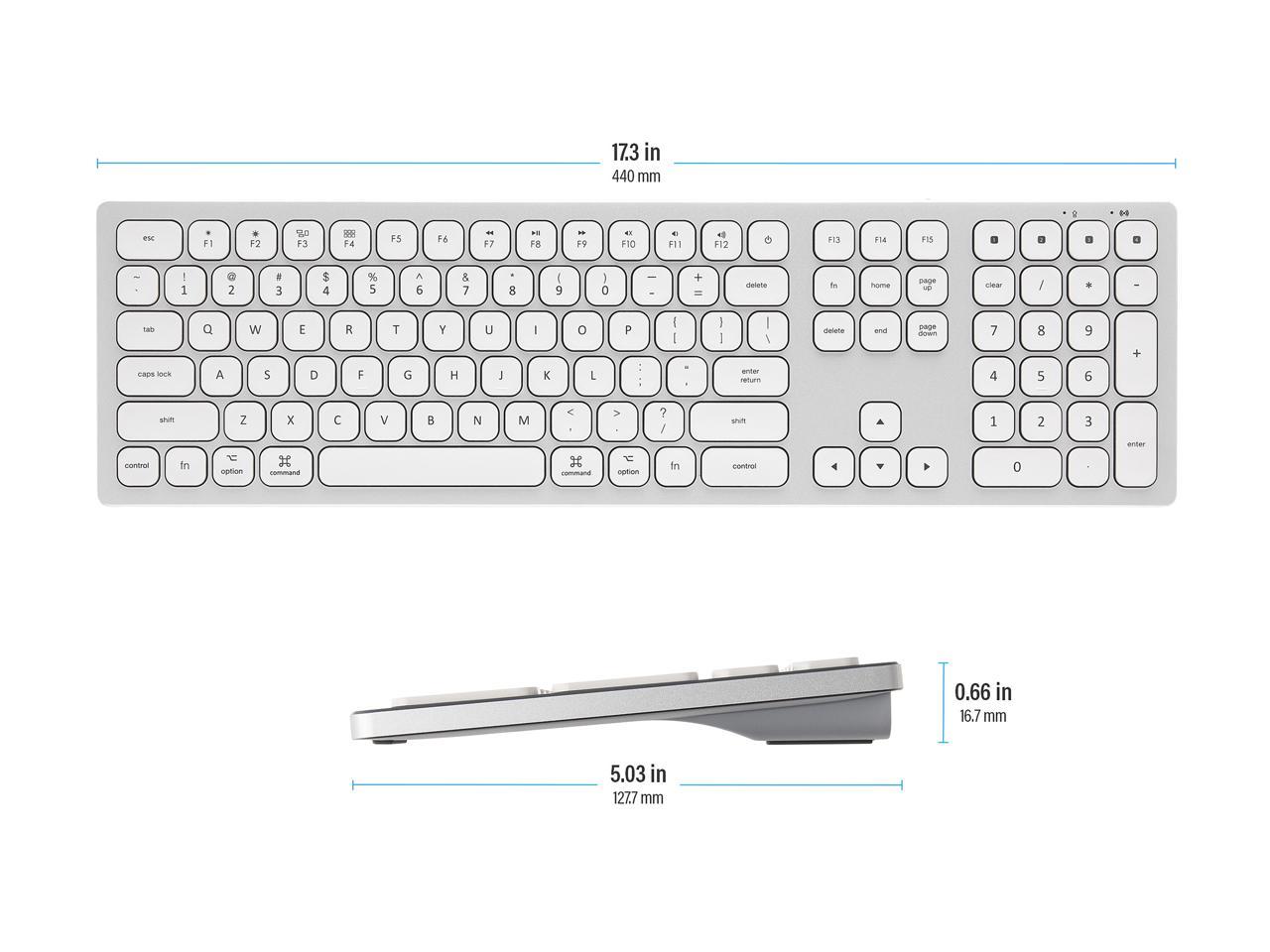 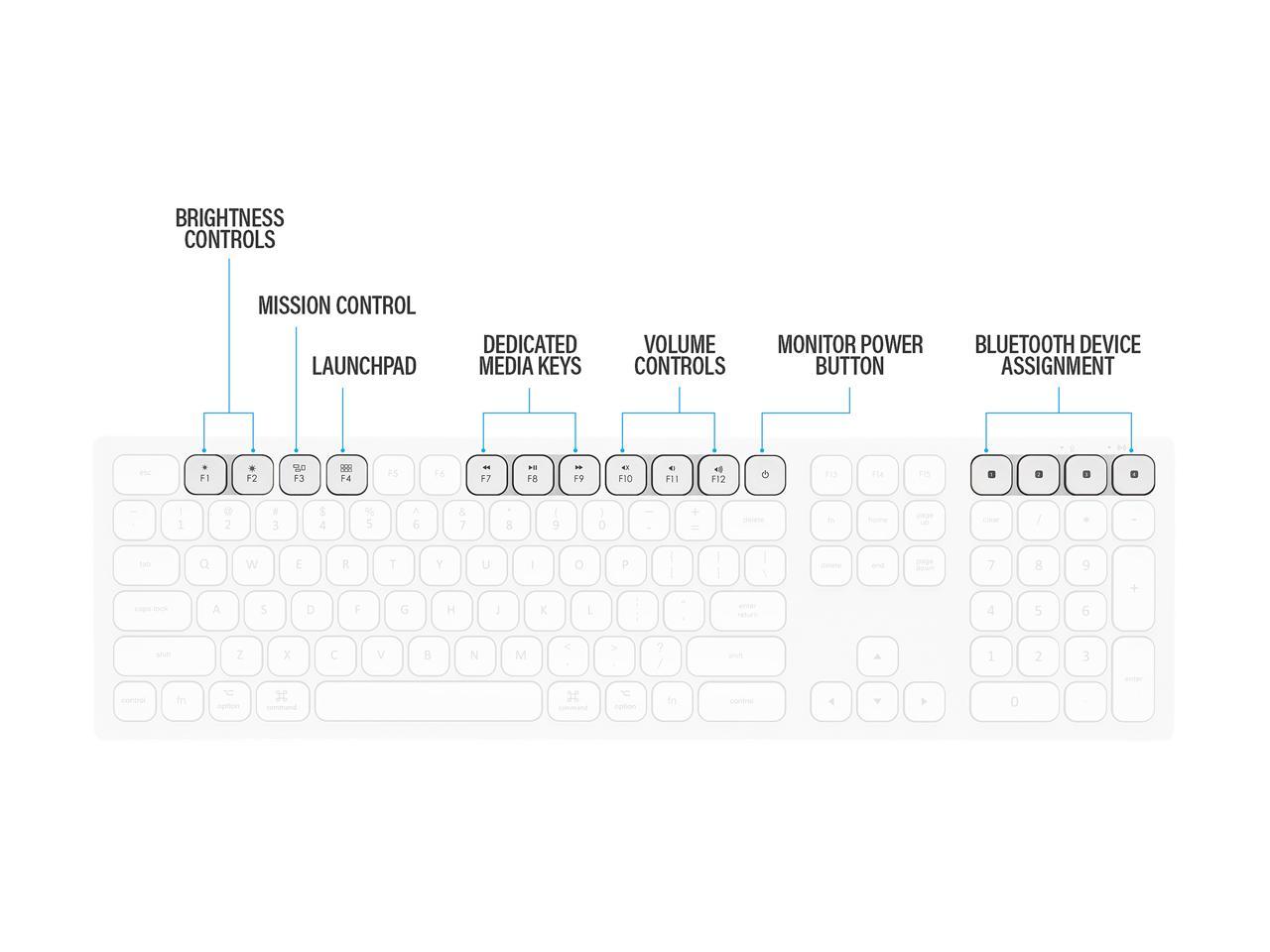 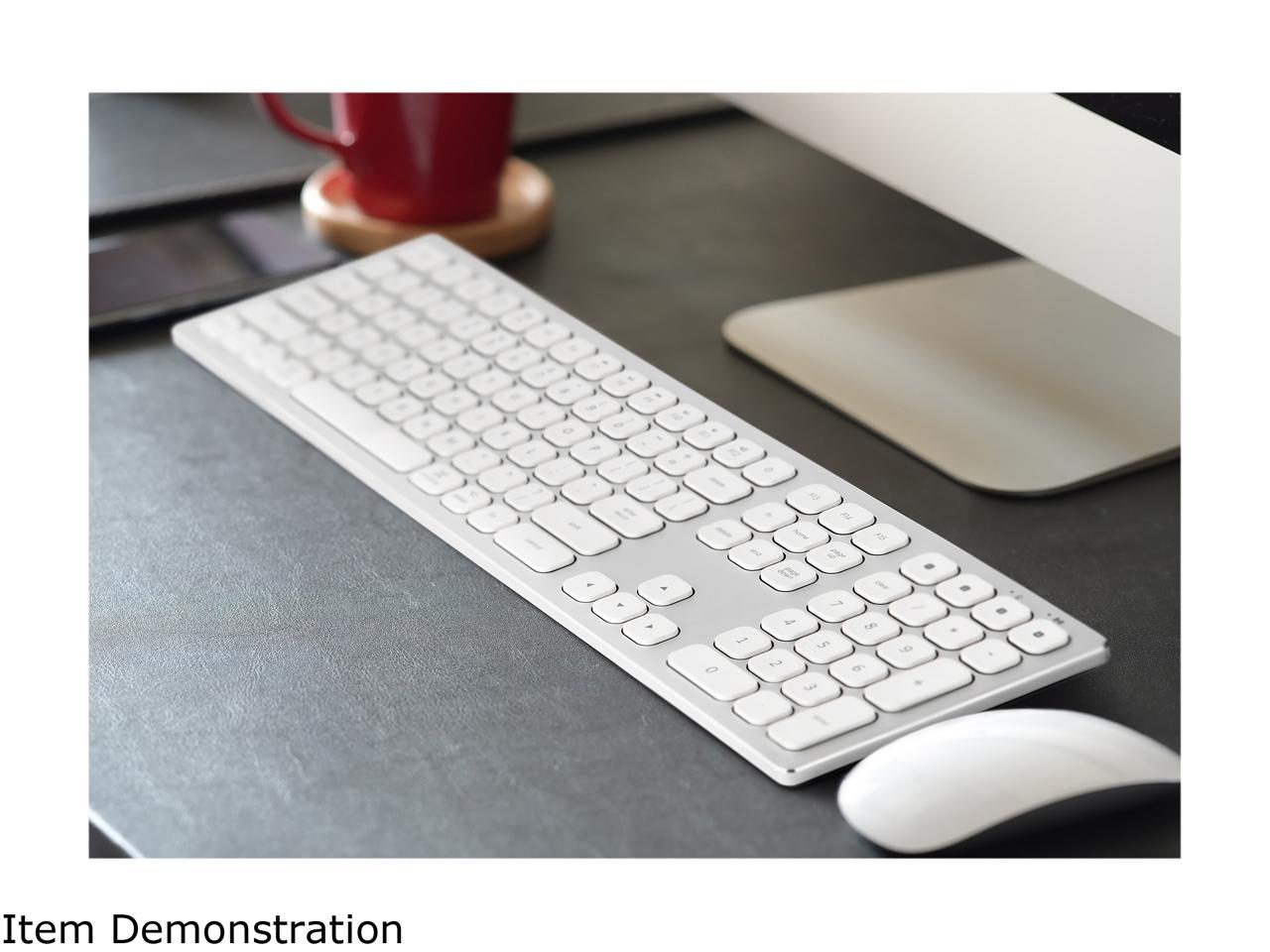 Up to four devices can share a single keyboard, such as PC, smartphone, and tablet. Pair via Bluetooth, and switch between your devices with a press of a button. Take advantage of the benefits of a full-size, energy efficient wireless keyboard with numeric keypad and myriad multimedia shortcuts at your will. Scissor switch makes typing feel natural and comfortable.

Conveniently use your keyboard with computers, smartphones, tablets and other Bluetooth capable devices up to 33 feet with reliable and stable wireless connection

Pair Up to Four Bluetooth Devices Every watt will be used to the maximum. In case of inactivity for up to 10 minutes, power-saving standby mode will be automatically activated. Battery can last longer (Two AAA batteries are required but not included.). Anonymous
Ownership: 1 month to 1 year
Verified Owner
Cleans up desktop clutter! Potential to be a very good keyboard even you do not use the multi-host feature6/18/2020 6:54:54 AM

Pros: - 4 Bluetooth pairing profiles enable putting away 3-4 other keyboards from desktop - Good keystroke feel and performance for rapid touch-typing - Nice appearance for a mostly Mac destkop - Special keys are as one would expect for MacOS - Pairs very easily with up to 4 computers

Cons: * Battery life not great. Under heavy use, batteries last about 10 days. That’s too short. I thought it might be due to using Eneloop rechargeable batteries, but I have found the time is about the same for brand new alkalines. * 3 keys (‘C’, ‘M’, and ‘N’) are already losing or have lost the writing on their respective key caps. Before assuming it’s based on my typing, NONE of my other keyboards have had that issue and certainly not after just a few weeks of use. * The keyboard is a bit too quick to go to sleep (presumably to conserve battery life which is already too, too short. This causes at best a multi-second delay when resuming typing — often much longer (see next comment). * Sometimes the keyboard does not wake up automatically. This is a bigger deal given how quickly it goes to sleep and sometimes requires turning the keyboard off and back on to get it to reconnect. This can waste 30 seconds or more. * Some letters, especially ‘U’, tend to be skipped more easily in my typing style. No other keyboard I use does this. My Newegg return period has ended so I have written Rosewill, a company from whom I have purchased good items in the past, about these issues. I think they may be sending me a replacement and will update the review afterward. After another 2 weeks, I have not received the replacement and being asked to send the original one back. Perhaps they want that first which is not great customer service. Inclined to remove another star as the existing issues remain and now the 3 keycaps have lost even more of their labels with two almost completely gone.

Overall Review: Updated after 5 weeks of use: [Reduced an Egg — that may still be a bit generous right now.] Still like the feel of the keyboard and its features / specs but definitely not as happy based on the Cons I added above during this update. Original post after about a week of use: Very pleased with the purchase. Being able to have multiple Bluetooth pairing profiles allowed me to put away 3 other Mac wireless keyboards cleaning up my desktop and avoiding constant confusion which keyboard was which (I did put labels on them eventually). Now I just press a button to switch which Mac is paired to the keyboard. The switching is almost instantaneous. All the keyboard functions are were I would expect and the typing / keystroke performance is good.

Pros: - Like the metallic feel of it, nice and sturdy

Cons: - using on a mac it will lag out a lot

Overall Review: wouldn't buy it for a mac since the bluetooth seems to lag out if typing too fast. also seems to miss keys here and there. tried to put new batteries but seems like the same deal. not sure if its just mac related or also for windows

Pros: - Nice material on the keys. - connects to multiple bluetooth hosts without a problem - heavy (might not be a pro to some, but i like the solidness of it)

Cons: - 10 minute shutoff timer. this wouldn't be a real issue, but the fact that the first few keys you type don't actually get to the machine is infuriating. how about queing up keys for when the bt stack is ready? :( - not really a windows keyboard, even though it's advertised as such. None of the media keys work at all. This is probably a deal breaker for me and will warrant a return unless I hear back with a solution from tech support. in short, the 'fn' keys do nothing on a windows machine. - some keys get 'stuck'. I type pretty fast, and sometimes if you go from one key to the next in quick succession, it'll completely skip the 2nd key.

Overall Review: probably going to be a return based on the shutoff issue and the media keys not working in windows issue.

Overall Review: The Rosewill K10 has the "feel" I've been looking for in a replacement keyboard. It has your standard allotment of function buttons that will be more than enough for an office worker. And, the ability to pair to several devices (up to four at a time) terrific for quick switching. Just as an example use case, I was using it to type on my iPad when I decided I wanted to look up a different movie on my home computer (it's hooked up to the living room). So I just pressed one button, switched to the computer, and typed my search, all without getting up. Convenient. But the bluetooth connection is a weak point, at least in the model I purchased. And it's why, ultimately, I decided to return it. The connection seems to be OK about 90% of the time, but the remainder of the time I fought against an interrupted signal that seems to cut in and out. My other bluetooth devices (including my previous keyboard) don't have this issue. • I'd have missing letters or words in what I'm typing (makes writing work emails precarious) • A button gets "stuck" (not the button itself, but I guess the signal from the button) and I'd end up with a long string of the same letter (imagine what happens when backspace gets "stuck" and erases about a sentence worth of content when you just wanted to delete a letter) I wanted to like this keyboard, but the signal issues just finally made me have enough.

1 out of 1 people found this review helpful. Did you?
Manufacturer Response:
Dear Customer, We are sorry for the problem. Please contact our support team at the number below for replacement. At the same time, we will pass this problem to our QC teams for improvement. We believe customer satisfaction and word of mouth are crucial in sustaining business. Phone: 1- 800-575-9885 Email: rma@rosewill.com Email2: techsupport@rosewill.com We look forward to hearing from you. Thanks Rosewill Customer Care
Laszlo B.
Ownership: 1 week to 1 month
Verified Owner
Positively surprised!5/15/2020 8:16:25 PM

Pros: - full keyboard - decent size, comfortable - has a small foldable leg to lift the farther edge of the keyboard - metal housing, solid construction, gives some weight to the keyboard. It won't move easily while typing. - so far holds up well, using it for 3 or 4 work weeks, still the first set of the 2 AAA batteries

Cons: I haven't found anything to complain about.

Overall Review: I bought another brand first somewhere else (same price range) which went back after 3 days because after even a 20-second pause using it, it went to sleep and when it woke up it repeated the first letter 3-5 times. So I had to go back and delete the duplicates. Common issue with some BT keyboards as I was reading the feedbacks. This keyboard is intelligent, even after it goes to stand-by, it wakes up intelligently and it is accurately transfers my keystrokes from the very first character. Also it doesn't go to stand-by that quickly. If it will be a stationary application - I use it for my work computer at my desk now that I work from home - would definitely recommend it. If you have to carry it, I think you might want a little bit lighter weight keyboard but that depends on how it will be used.

Pros: Sleek design, heavy (might also be a con) Connects well to my phone & Surface Go. Num pad nice addition, as I needed it for work.

Cons: Delay is switching devices, will not connect to my Win 10 desktop for whatever reason. Clearly designed for a MAC, but works with Windows and Android.

Overall Review: Got it on sale, not a bad deal. Would be nice if it connect to my home PC, but this might be my fault.

Cons: spacebar key does not always pick up. More and more frequently after less than two months, I have to push the spacebar harder or push it twice. Very frustrating.

Overall Review: I got this keyboard less than 2 months ago. It works great except for the space bar. It continually does not pick up when pressed. As this is one of the most used keys, you can understand how this is frustrating... I just went to look to return it, but newegg has it listed as past return period. Maybe my experience is localized to this keyboard, but I would be careful to fully use it during the return period before keeping the keyboard. Buyer beware...

Did you find this review helpful?
Manufacturer Response:
Dear Customer, We are sorry for the problem. Please contact our support team at the number below for a replacement. At the same time, we will pass this problem to our QC teams for improvement. We believe customer satisfaction and word of mouth are crucial in sustaining business. Phone: 1- 800-575-9885 Email: rma@rosewill.com Email2: techsupport@rosewill.com We look forward to hearing from you. Thanks Rosewill Customer Care
Anonymous
Ownership: 1 month to 1 year
Verified Owner
Works well for a few months9/19/2020 7:03:59 AM

Overall Review: This keyboard is -very- sensitive to interference. You need to keep all other Bluetooth devices away from it otherwise it disconnects over and over and over and will switch between languages.

Did you find this review helpful?
Manufacturer Response:
Dear Customer, We are sorry for the problem. Please contact our support team at the number below for replacement. At the same time, we will pass this problem to our QC teams for improvement. We believe customer satisfaction and word of mouth are crucial in sustaining business. Phone: 1- 800-575-9885 Email: rma@rosewill.com Email2: techsupport@rosewill.com We look forward to hearing from you. Thanks Rosewill Customer Care