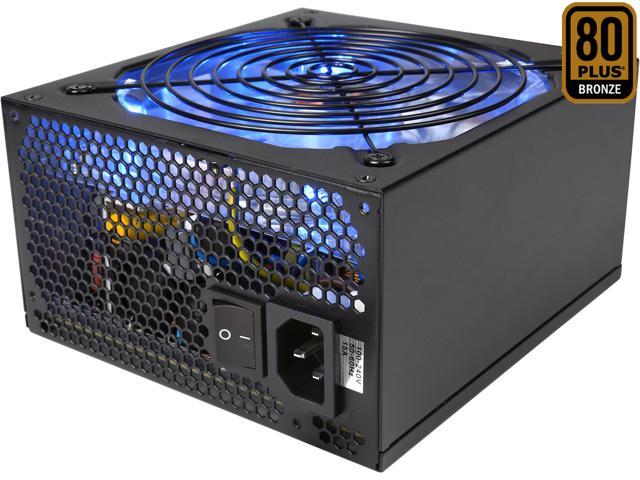 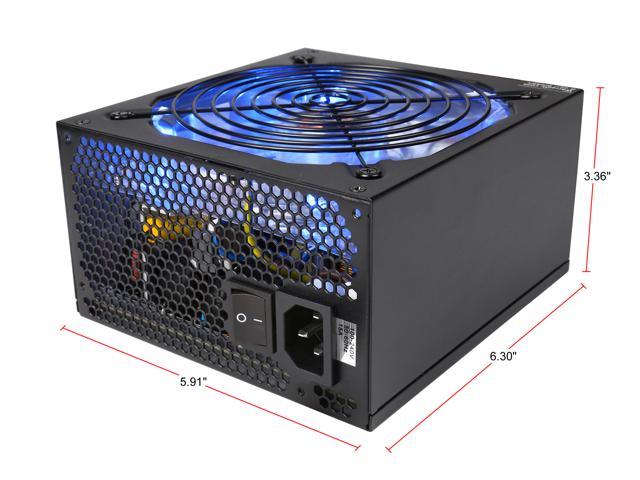 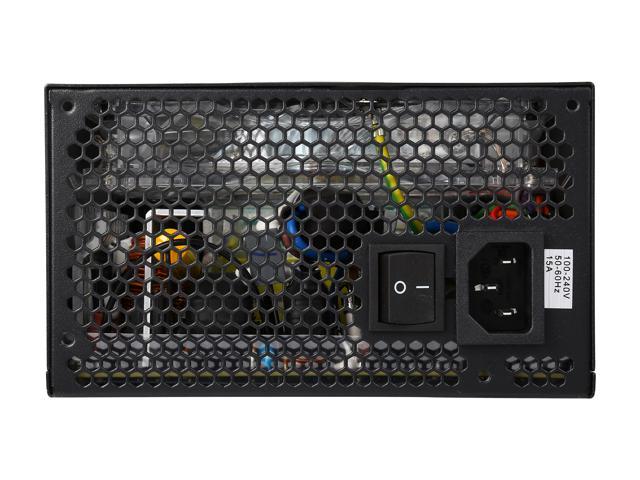 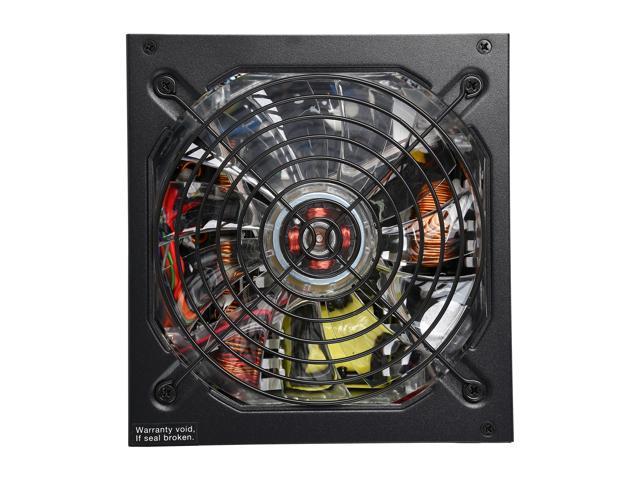 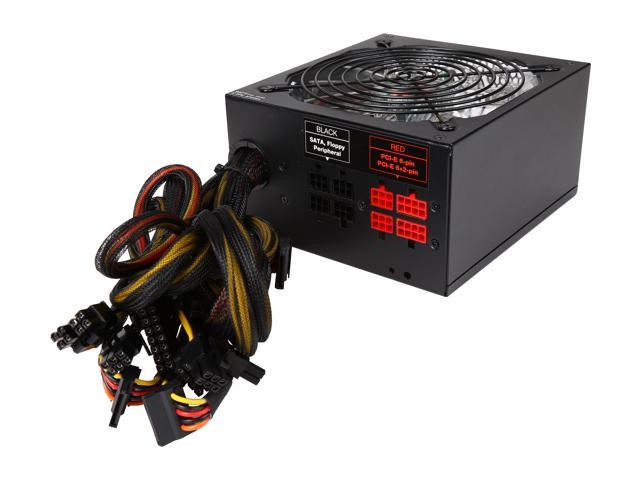 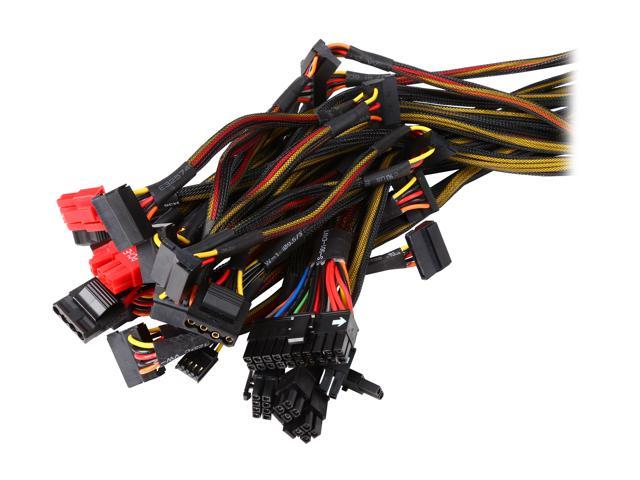 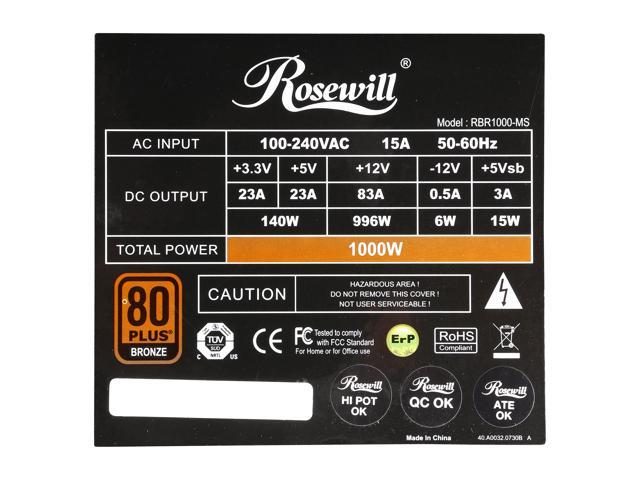 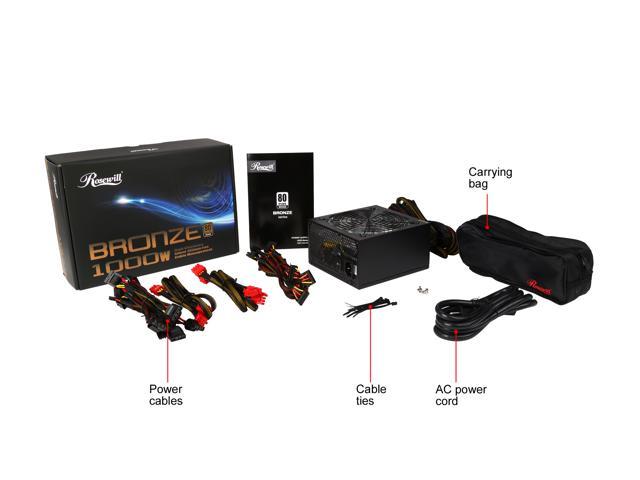 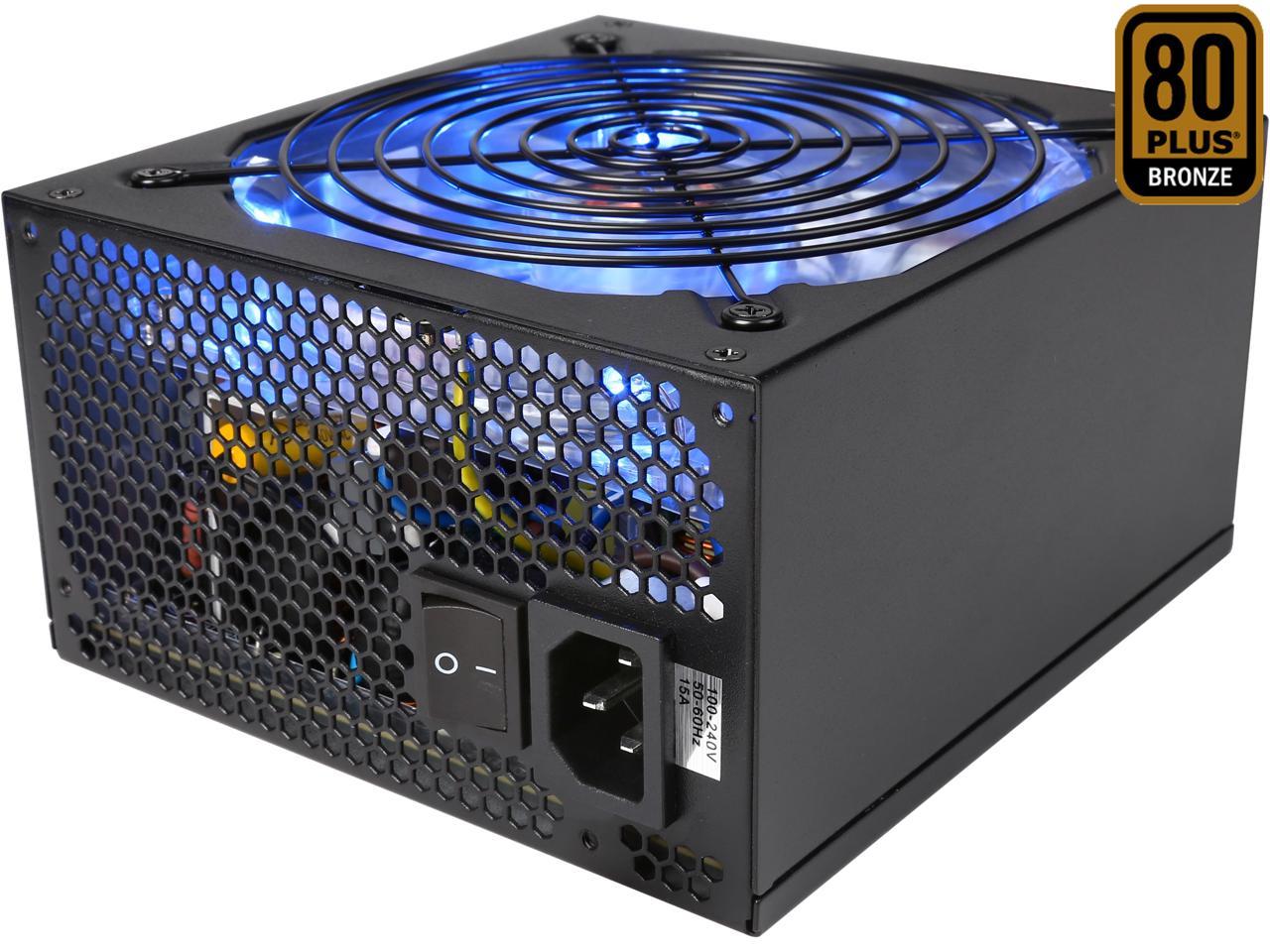 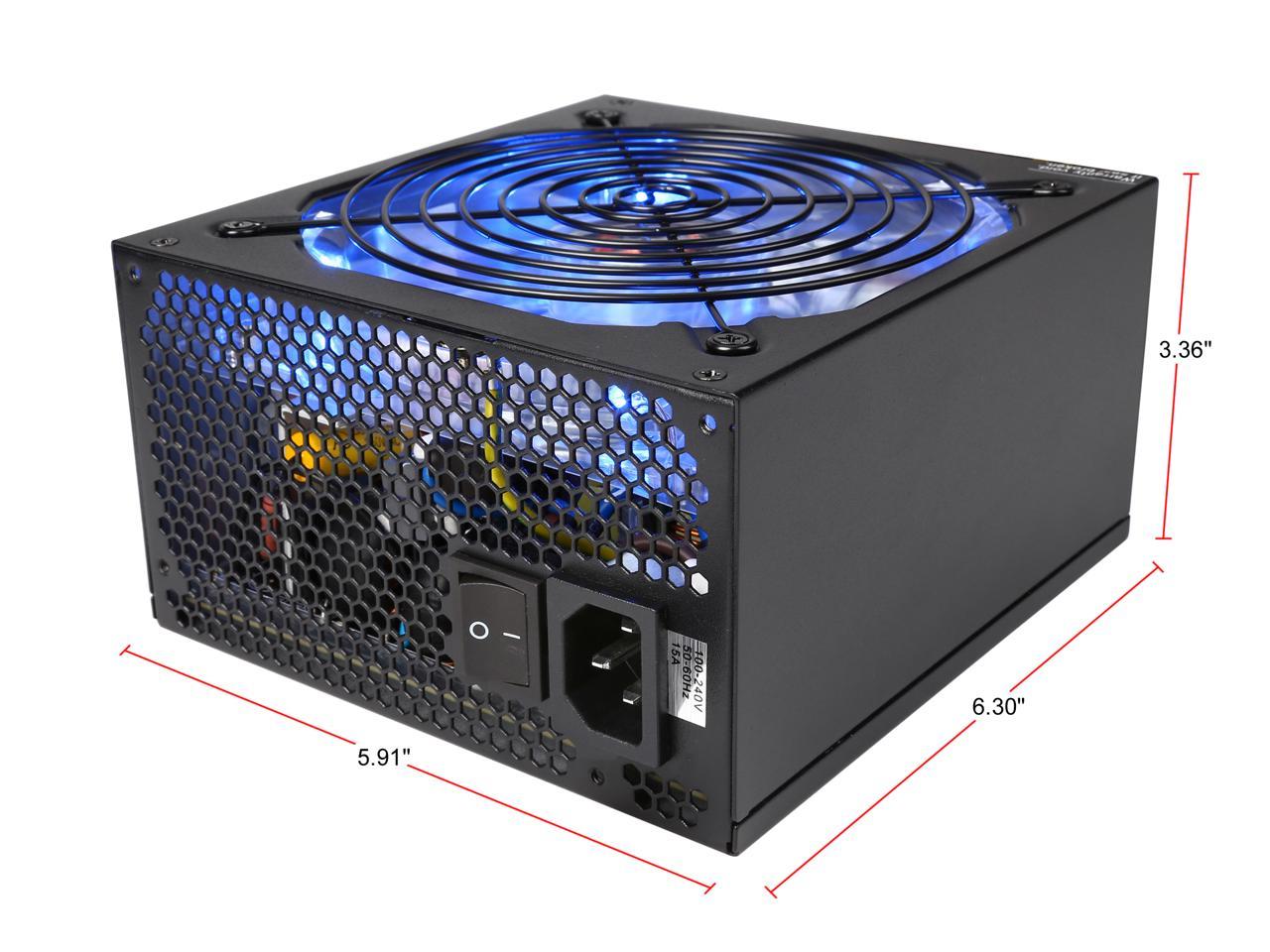 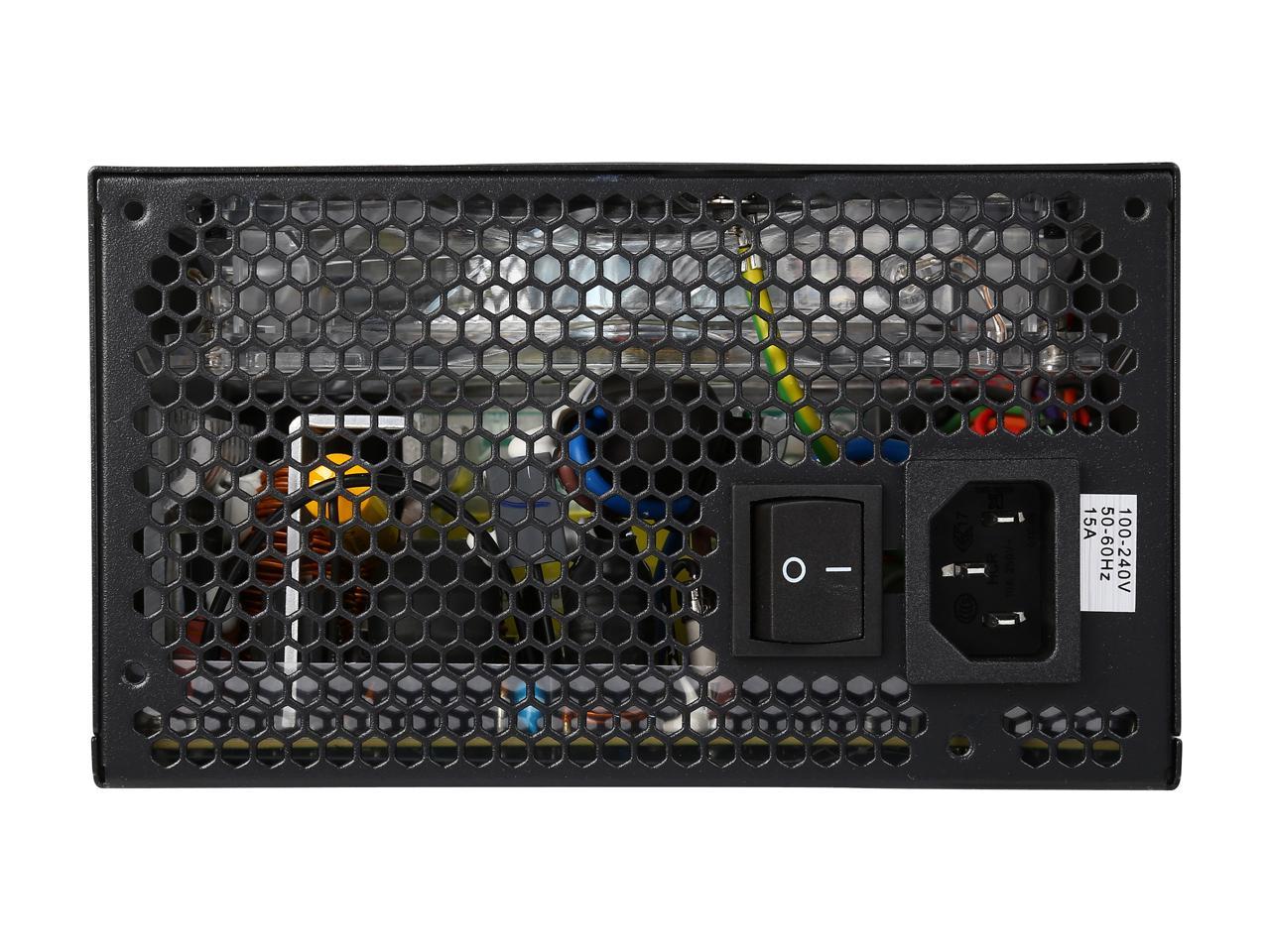 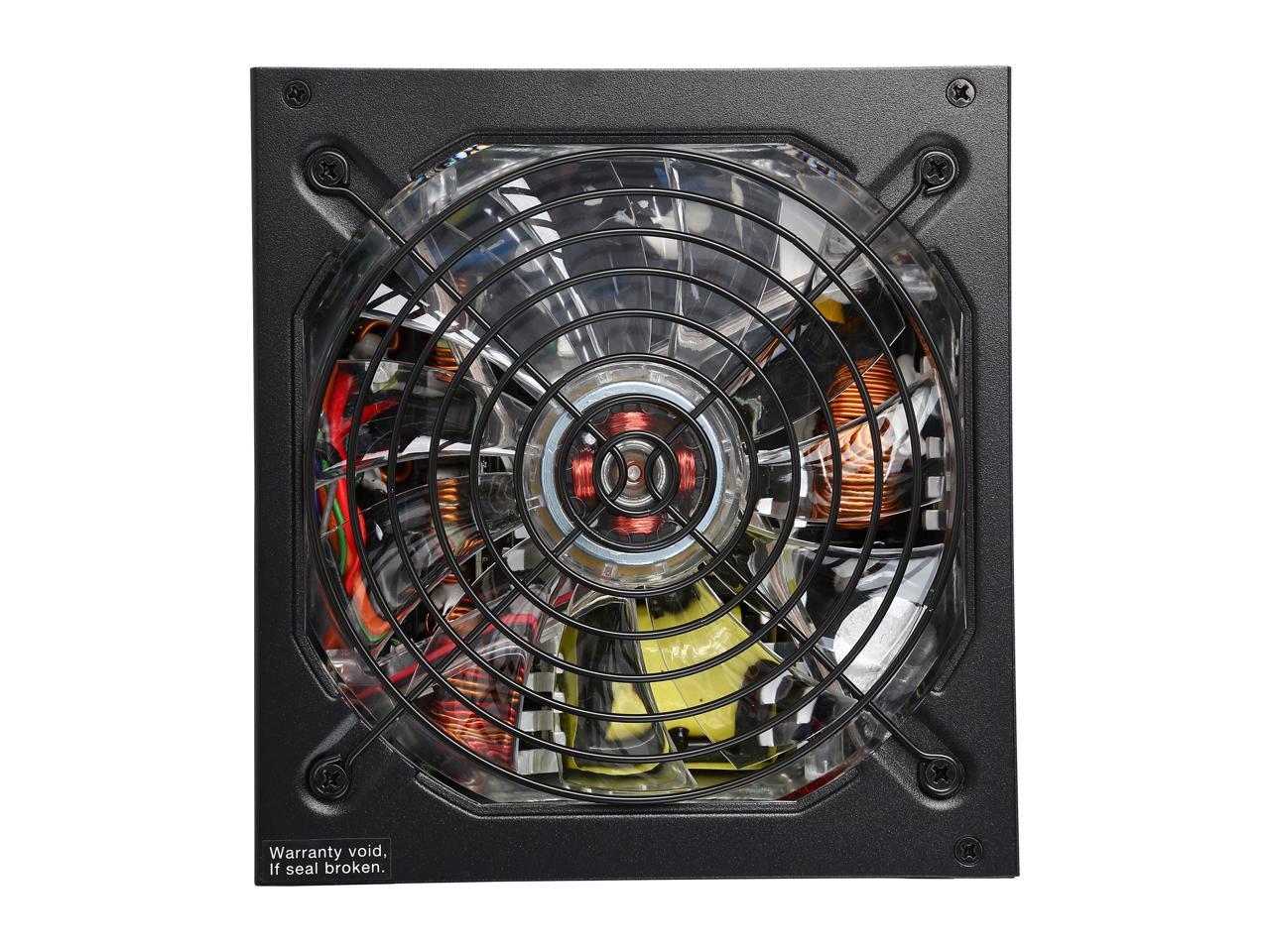 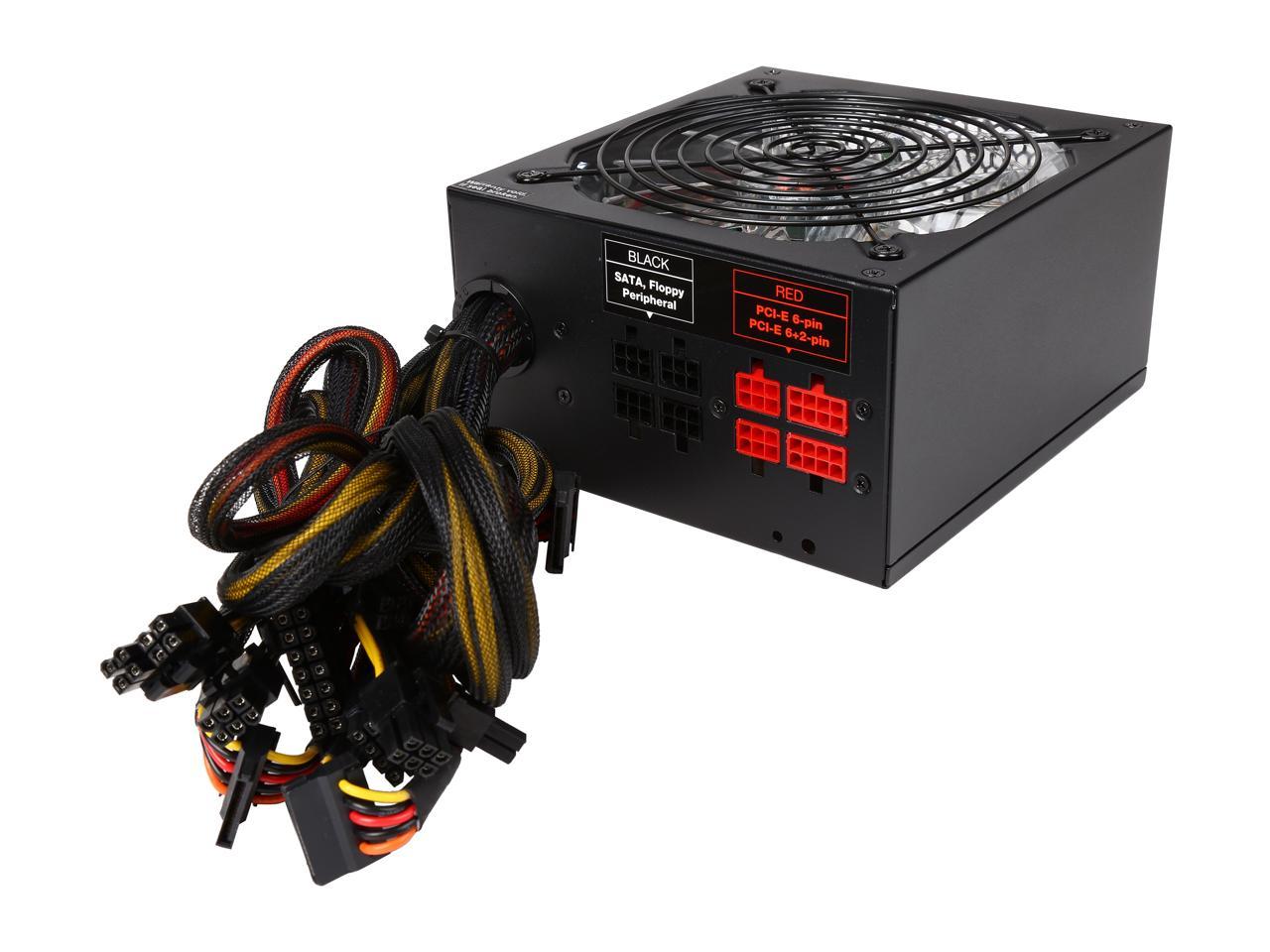 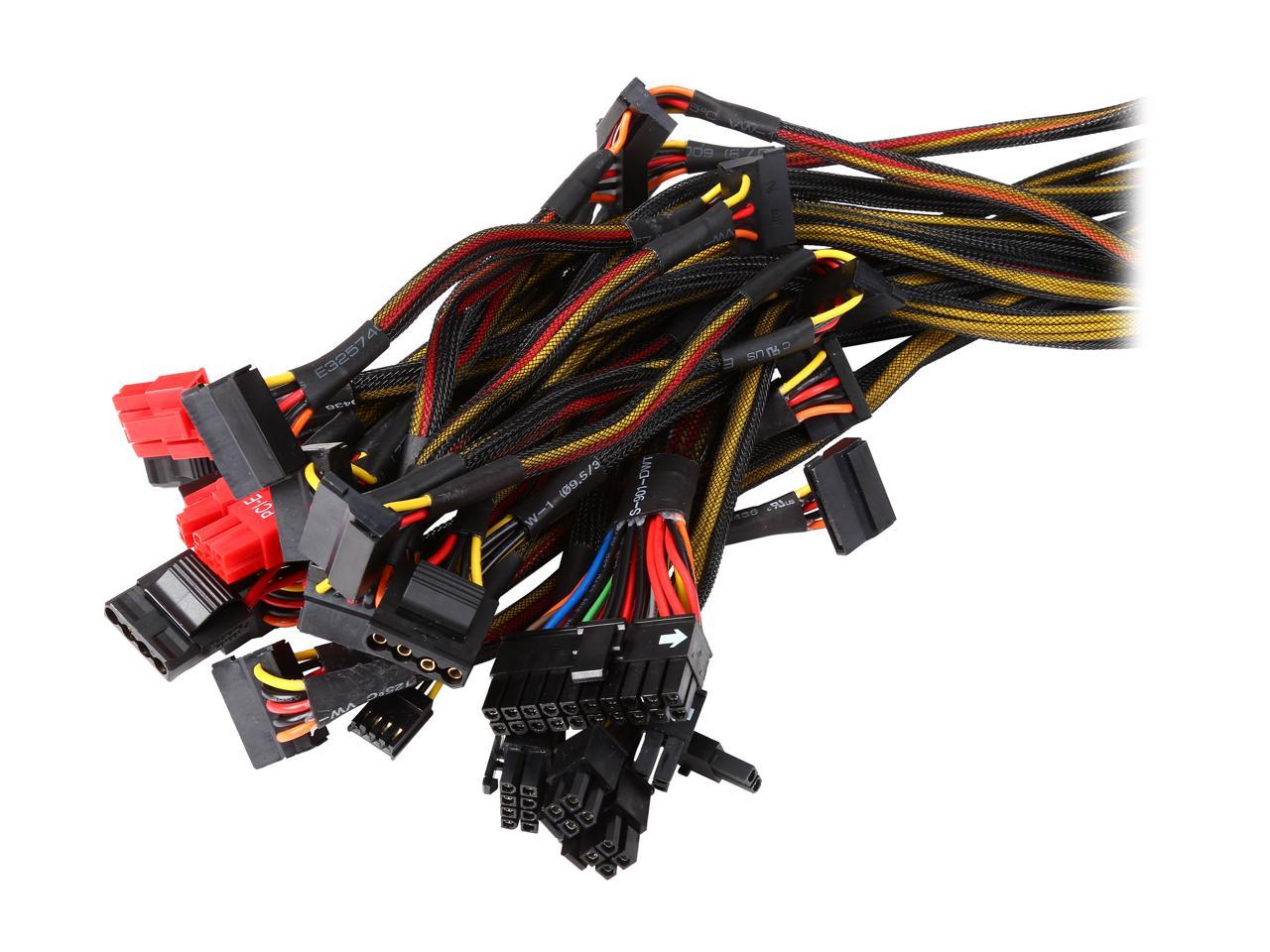 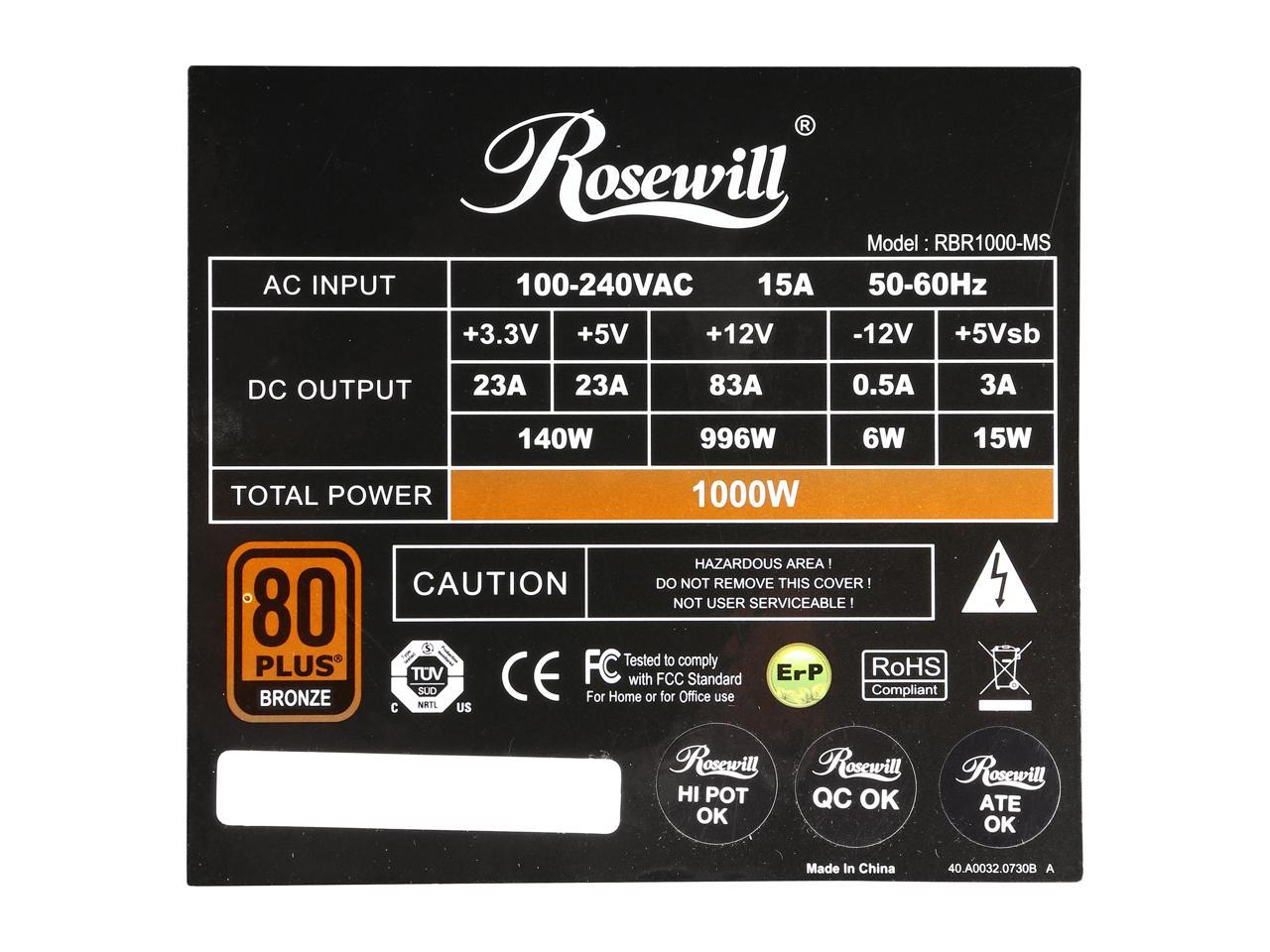 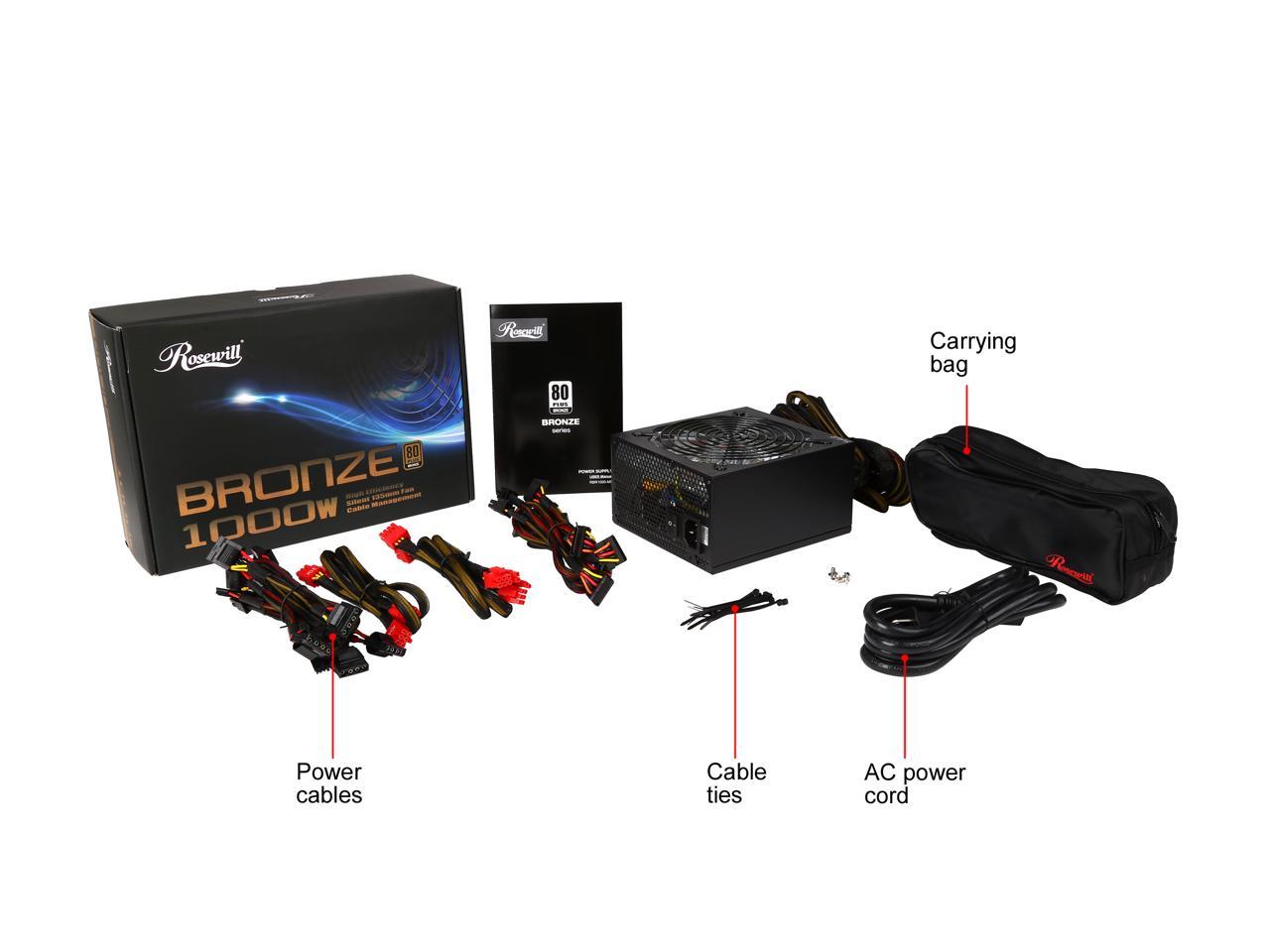 The RBR 1000 Watt power supply is 80 PLUS Bronze certified and delivers up to 85% efficient performance under typical loads. This high form of efficiency saves energy, reduces heat in your computer system, decreases fan noise and prolongs the PSU’s life span so you can maximize your gaming activity.

A semi-modular PSU design comes with only the essential cables pre-attached. This allows for some customization of additional cables, plus reduced clutter and better airflow compared to non-modular PSUs. Learn more about the Rosewill RBR1000-MS

Pros: Ok where to start; so far I love this PSU. Was a little nervous about going with this Brand but I figured I would give it a shot based on all the great reviews here. I have a Full CM Stacker Case and the Cables reach everything fine; not only do you have the modular setup you also have 8 additional wire attachment choices. So not only is this PSU good for your present Rig, but it should get you thru all your upgrades as well.

Cons: The only thing I wish it had and I knew it didnt when I bought it is one of those small Led's that let you know if your PSU is working or faulty. Sometimes you can't tell if a PSU is a problem so that little Green/Orange/Red light helps you figure it out. So this is not a con but a suggestion for them to add this to their Higher End PSU Line.

Overall Review: Now if your concerned about the Brand and I know I was here are my thoughts as to why I chose to try Rosewill:-- last year alone I went thru 3 Brand Name PSU's SilverSt Decathalon & 2 OCZ 1000w and they all were really expensive and not one of them lasted over 6months, hell the 1st OCZ lasted 2months and the 2nd one last almost 5 months. So sometimes buying the best Brand Names isnt always the best choice as I learned with many of my HW choices 18months ago, maybe it was just a bad year for all major companies and the new technology. It was the first time I actually had money to build the Rig of my Dreams and I got the best #1 of everything from a Case right down to a Surger Protector. The only working parts I still have from that 4500+ Rig are my HD's & CPU. So now I dont put alot of faith in Name Brands and with this new Rig Build I am really happy with all my choices which were all bought here from Newegg.

Pros: It works great. Very quiet. Picked this up for $99.00! I keep getting advice in forums to ditch this thing and go with Corsair (understandably) but so far this thing works fantastic.

Cons: Power cables too short to run the back of my Antec 1200.

Pros: Modular design allows for a nice clean case. However, two PCIe power cables and one SATA chain cable are fixed (ie not modular). So for a simple system like mine with one hard drive and one optical drive, and one graphics card, I dont actually need any of the modular cables, but allows for expansion later. Comes with a nice carrying case to keep extra cables together. Comes with a few zip-style cable ties too. Overall great value for the money.

Cons: First one was a bit flaky and didn't want to start the system from power off when warm, RMA'd through Newegg and new one works great. I would still recommend this PSU. Does not have a fan RPM sensor cable to hook to the motherboard. CPU and ATX power cables are a bit of a stretch in my case (Cooler Master Cosmos 1000), but in my case the PSU is on the bottom and the connectors are on top of the motherboard, so I can't complain too much, but bottom mounted PSU cases are becoming more popular.

Overall Review: Why does this thing have a CPU 8-pin power as well as a CPU 4+4 pin? The extra 4+4 pin is fixed so its just coiled up in the case in my way. Also note that the fan's LED stays on all the time (at least in my system) and its a bit bright so you may want to not put it in your bedroom.

Overall Review: cable management is tough, thick cables, but not really anything bad. ive had it for 7 years and through tons of upgrades and its still powering everything like a boss

Pros: This PSU has never failed me ONCE in the past 4 years. With all the crazy weather in Alabama, with power outages and what not, this PSU has withstood many a trial through me. I've toted my case throughout college, taking home to LAN parties. It's got mileage, but I feel I could keep using it for years to come. Rosewill may not be your first option for certain things, but their power supplies have great performance and a re reliable. Also loved the Blue LED. Went with my Black and Blue theme perfectly.

Cons: 4 12V rails and hard to tell what rail goes to what to connection to make sure you spread power out over the rails.

Overall Review: Even with 4 rails, I never had a problem with the PSU not supplying sufficient power. I was running 3x7950's without issue.

Pros: After a few years now, this thing is still running strong. Purchased on a black friday, I decided to "risk" it and purchased my first of many rosewill products. To this day I think this is one of the best purchases I have yet made from newegg. Rock solid performance, and it has survived 3 builds now with no problems whatsoever, taken every upgrade with no issues and continues to meet my power needs even with all the accessories Ive got running off of it. Normally I would say the price is rather high for a "generic" brand, but at this point I would say its worth it. Every time i rebuild I test it, and everything is exactly within optimal ranges.

Cons: At first the fact that a few of the cables were not modular, but quickly found uses for the static lines, ive only got a few extra molex and sata connectors at this point, which I think will mostly be remedied soon. I really do wish they would get rid of floppy power connectors and just offer some molex-to-floppy adapters or some such thing instead. Price can be considered high, but keep your eye out, this things on sale constantly, and Ive witnessed several power supply related %'s off to go with it, lowering the price considerably. My only REAL gripe is.. why always blue!? why cant companies make several colors available?! Red! Green! Anything! I realize at this point, blue is the dominant color, and its hard to match anything but blue, but cmon!

Overall Review: First off id like to say this is the only follow up review ive done on newegg, because the item is just that awesome! This was the first time I actually spent money on a rosewill item, fearing the generic substandard, and it laid the groundwork for several awesome rosewill purchases thereafter. I have high faith in the brand now despite the horror stories scattered amongst the internet. I know most people are not going to get it as cheap as I did, but despite that this is still a solid purchase. Its stood up to several abusive situations, like shorts, and this one time lightning struck outisde my office and sparks showered out of the back of the PSU despite several means of grounding, and took it like rocky balboa takes a beating. Gushing like this can only come from me if the item is exceptional, which this is, which is why I feel the need to fanboy this a little. It deserves it. Its a worthy item I would reccomend to anyone. p.s. Booo blue.

Pros: Reliable, dependable, worth it!

Cons: Had a little trouble setting it up, but that may have just been because I am/was a newbie builder.

Overall Review: I have had this thing for more than two years, and it has perfectly powered different parts and survived a few power surges and outages without damaging my other parts. Edit: I have now had this same PSU for a little over FIVE years. It has been through quite a bit, and it's still running strong!