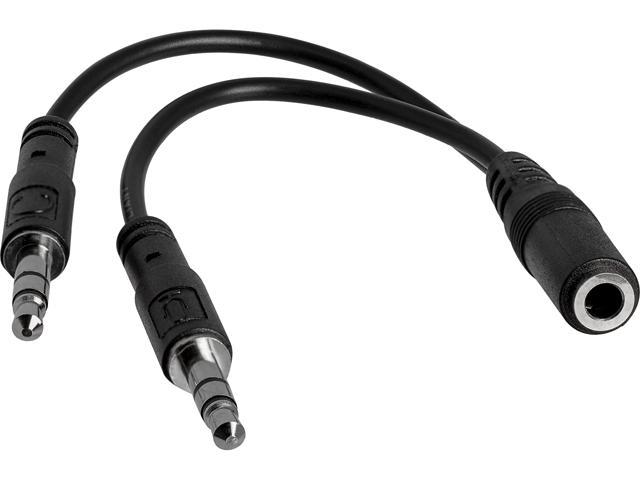 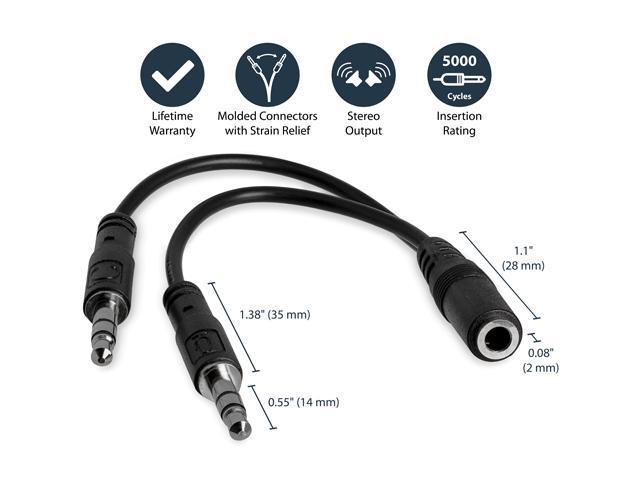 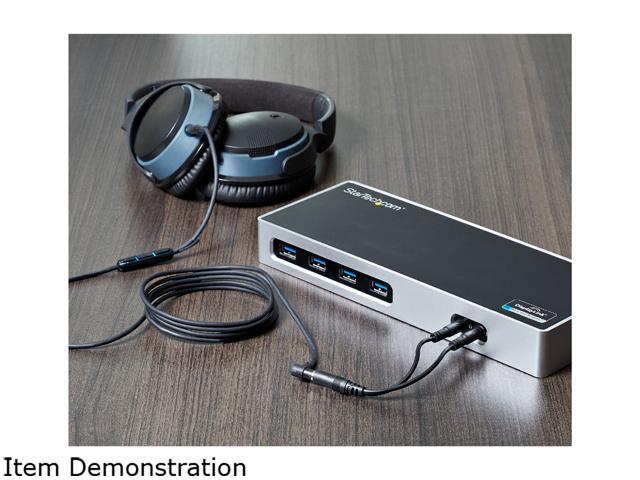 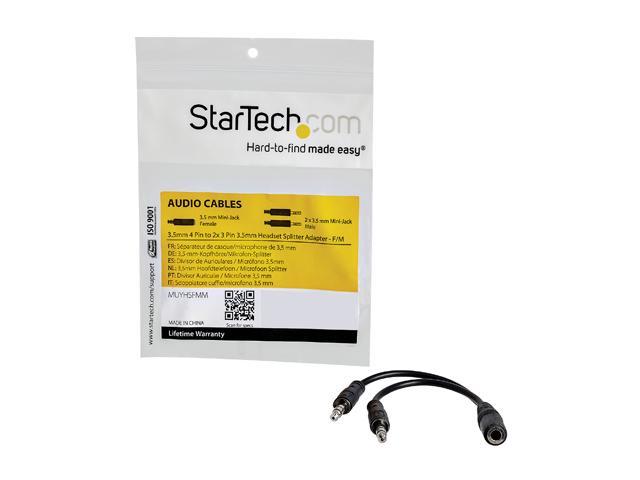 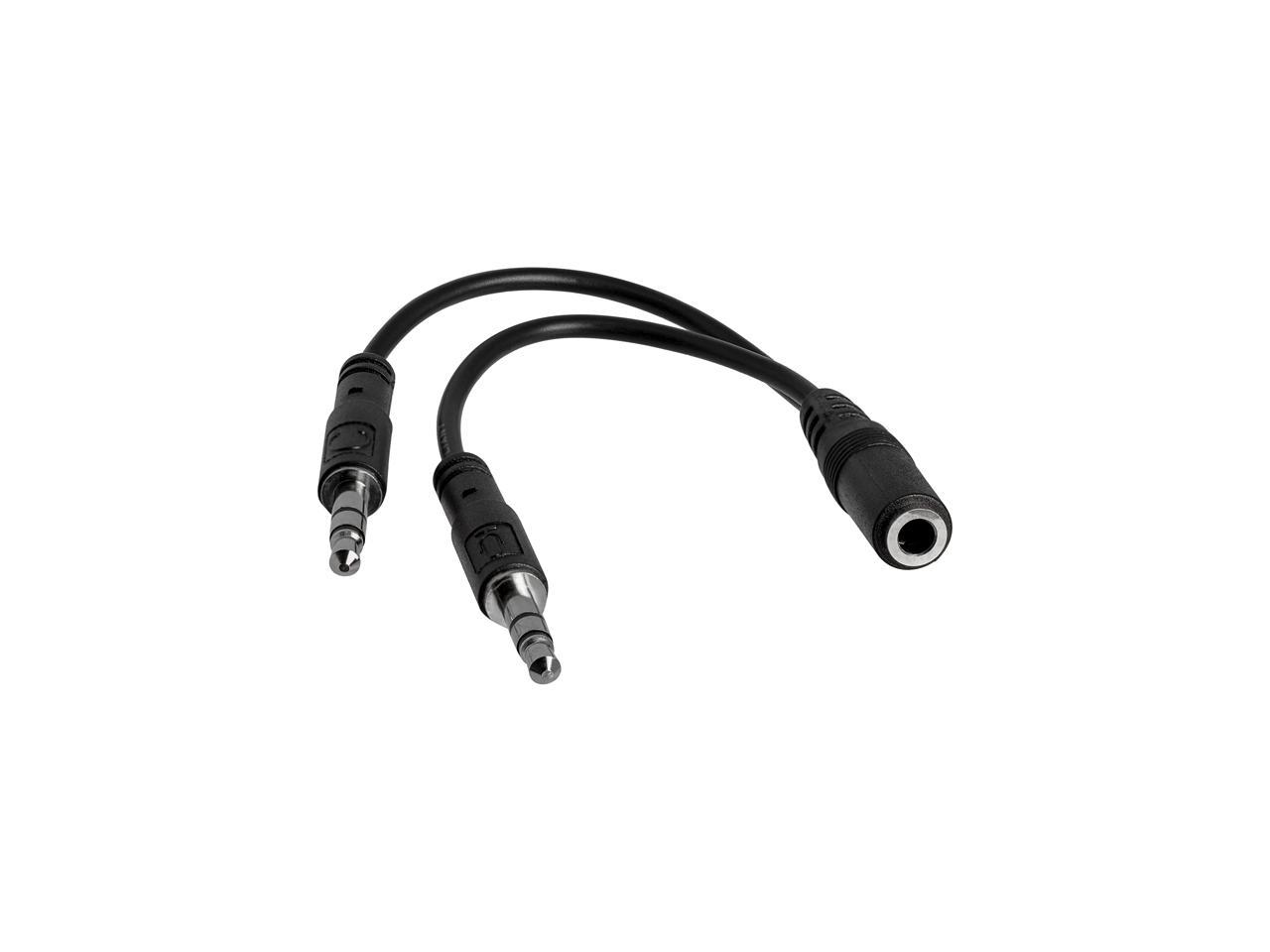 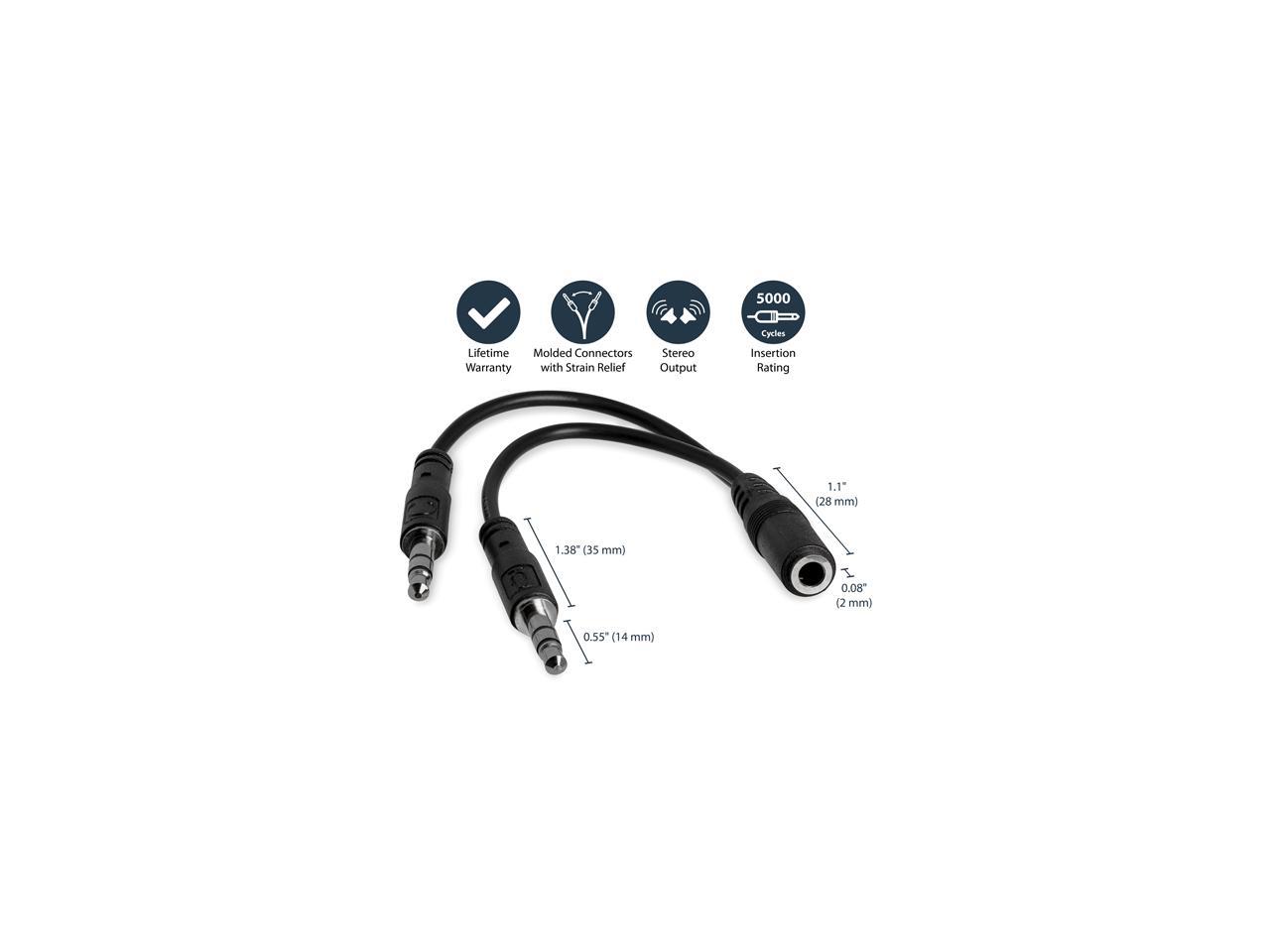 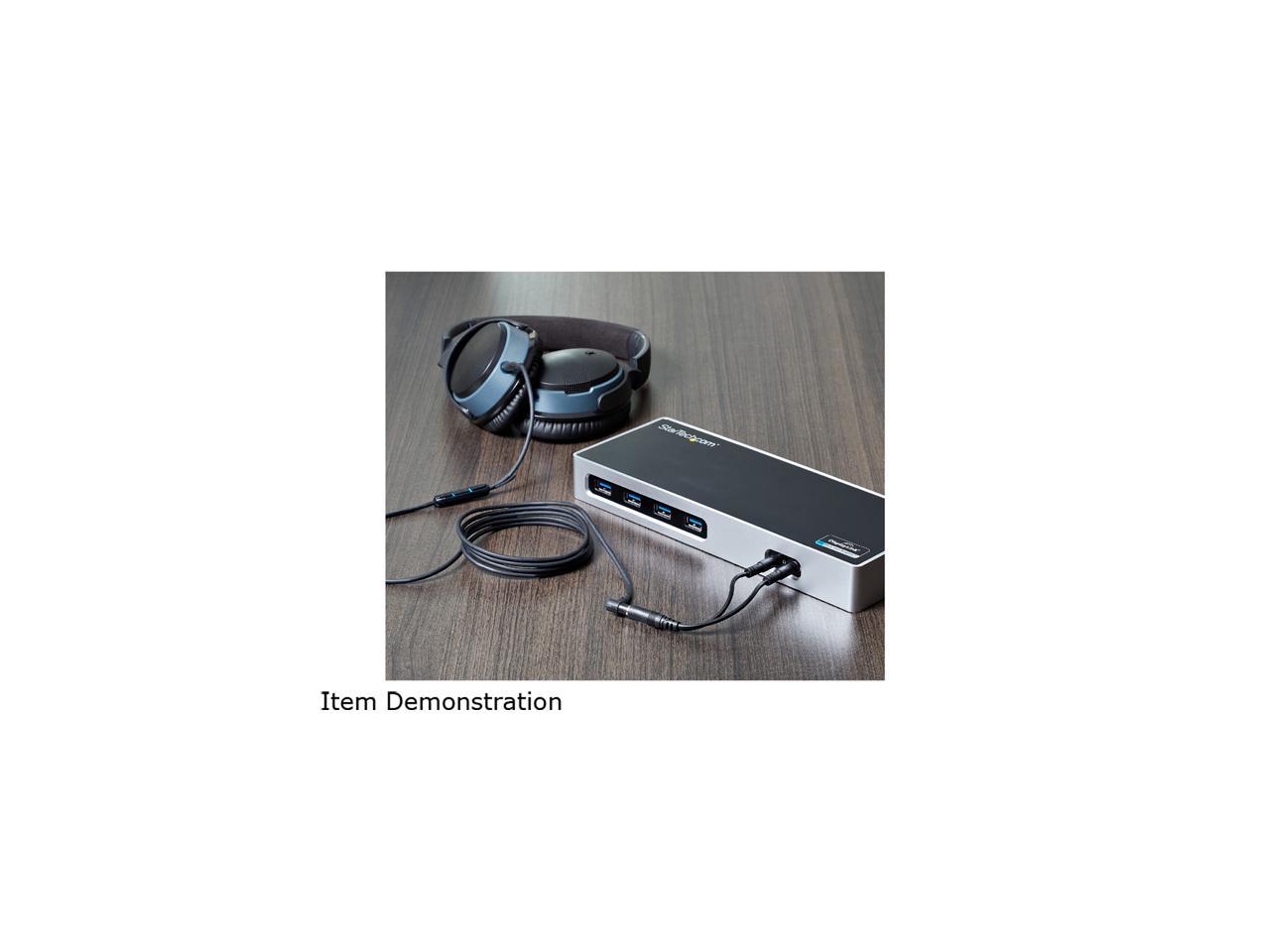 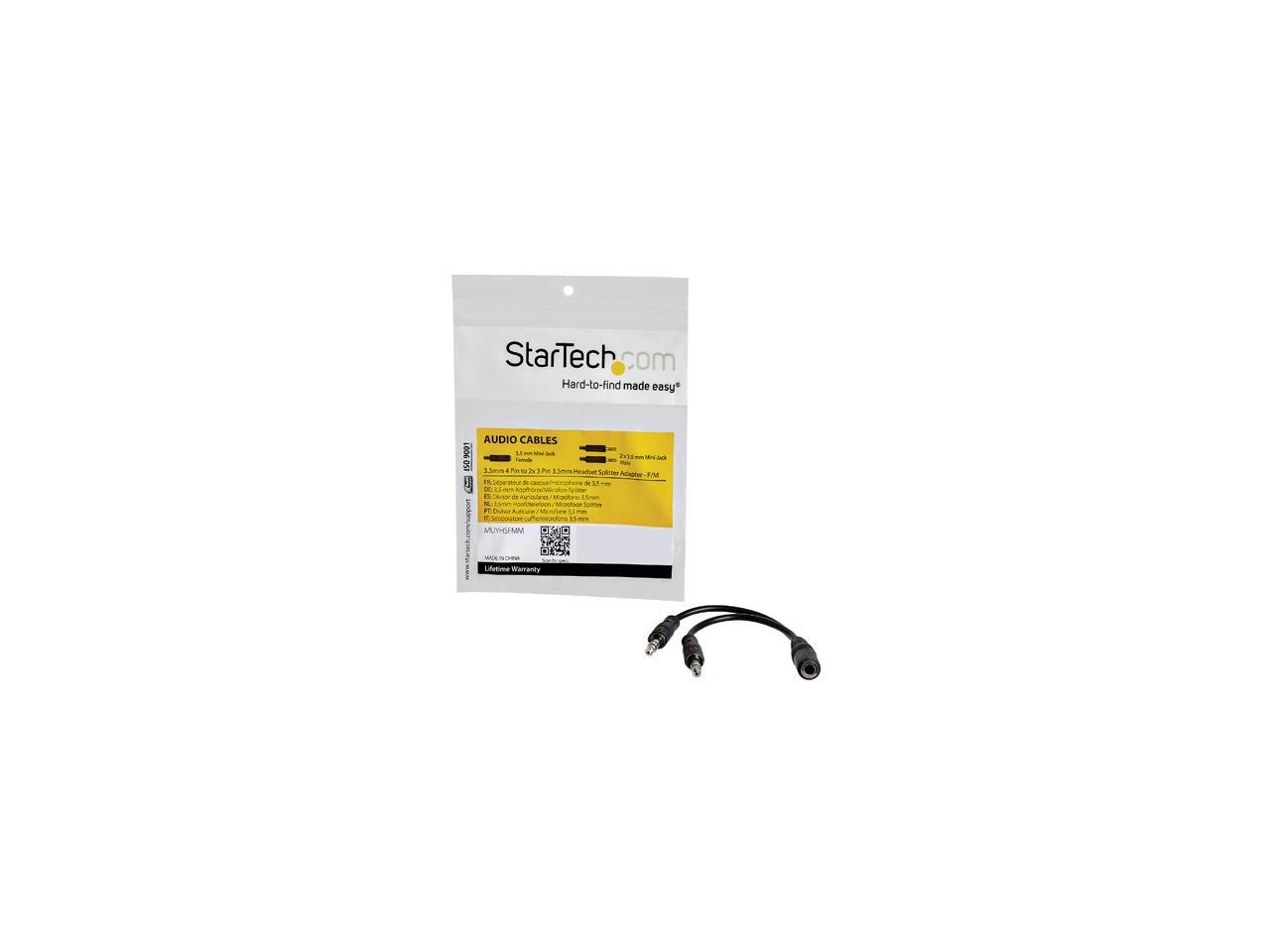 Learn more about the STARTECH MUYHSFMM

Pros: Splits the mic and audio signal to two ouputs

Cons: all black, hard to see the markings for headphone and mic you may need to plug in the Headset first, before plugging in the microphone.

Overall Review: I have a headset for my Android phone which is pretty high quality. It has a great inline mic and makes it seamlessly easy to from music to phone calls in a matter of one press, and since the microphone was so good, I wanted to use the headset on my computer for gaming. That's where this device comes in handy. When using this, I can use my nice stereo headset on my pc to online game. it splits the signal, however, I took a point because it seems there is something a tad off. I can only get the sound to be clear if I plug the headphone jack in first... then plug in the headset to the adapter... and THEN plug in the microphone. It could be something with the hardware on my rig, but I've used straight headset-mics in the past with no problem. There is static in the headset if I don't do it just right. Since I'm not sure if it is the adapter or my settings, I can only take one point. But when it works, it works beautifully.

Overall Review: I bought this because i have a headset, Astro A40, with a microphone, but only one 3.5mm plug comes off the headset.Rather than buy a $150 adapter from them, i plug this into my computer, plug the headset jack into it, and boom. my headset now has both sound and microphone output. Like i mentioned the cables feel cheap. But if you take care of your stuff, they should last you.

Pros: - They just work - Solid connections for all male and female jacks - Work great with my Samsung headphones - Mic and Audio work perfect

Overall Review: Solid connections into the female jacks on my SilverStone ITX chassis and solid connection to earphones. Mic and speaker quality are great. Don't hesitate to buy if you need a jack splitter.

Pros: It did what it said and just worked...

Overall Review: Used it to plug my apple headphones into my work laptop and use Skype.

Pros: Does exactly what it says. I have a headset with an in-line microphone that I wanted to use for PC gaming, which this adapter made possible.

Cons: It's an adapter.. so not really any cons unless you bought it for the wrong reason.

Overall Review: Worth the $8 to use my inline headphones for a gaming headset.

Pros: -Works as advertised. -Is exactly as long as it needs to be, so there isn't any added noise or input impedance. -All connectors have kink proof covers (very important in audio adapters). -Looks nice.

Cons: -There could be a little more contrast or some color coding on the headphone/mic indicators on the connectors. -The connectors aren't gold plated, which isn't a big deal regarding audio fidelity, but may affect longevity.

Overall Review: The mic adapter works fine on mine (with Audio-Technica ATH-CKS55i). I would definitely recommend this product. I didn't give it 5 eggs because there is still some room for improvement.

Pros: Great product for splitting the audio and microphone from headsets with an inline mic. This is necessary on PCs that do not recognize inline mics.

Cons: On the end of each output of the Y splitter, there is a small imprint of a mic and a headset to separate the two outputs. But because the wire is black, it's hard to tell which is which at a quick glance. It would have been easier if the product used colors, like the standard green/pink labels.

Pros: Does exactly what I need it to.

Cons: I have to use a flashlight when connecting to the PC at night. But that's not because of the product, that's because my bedroom doesn't have lights.

Overall Review: I have a nice headset I use with my iPhone, and bought this so I could use the same headset with my PC on Skype. Works beautifully.