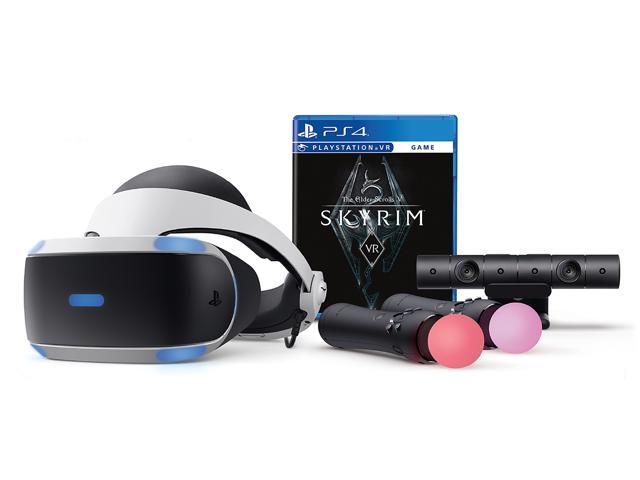 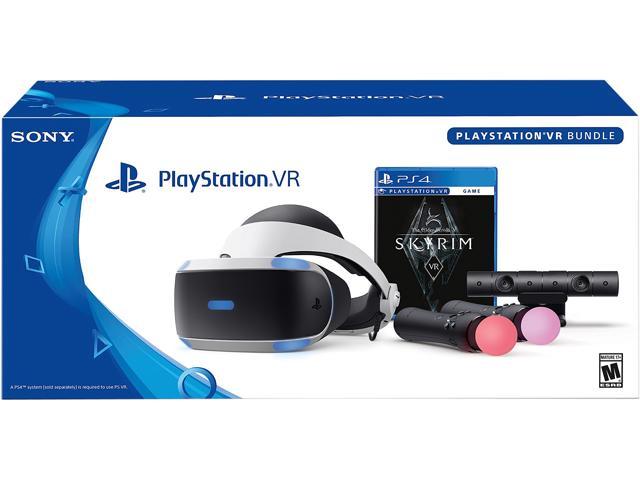 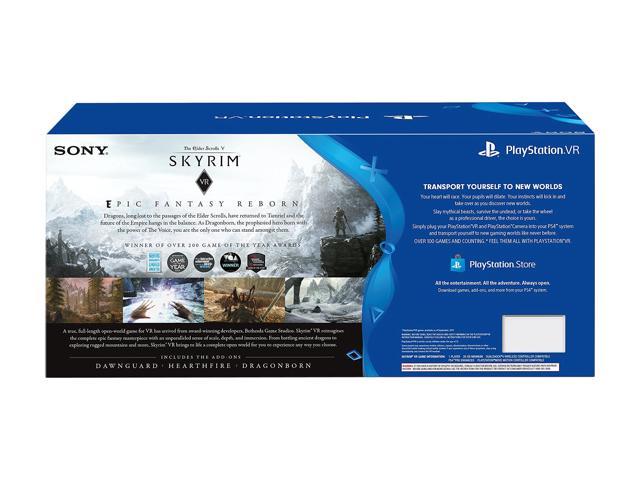 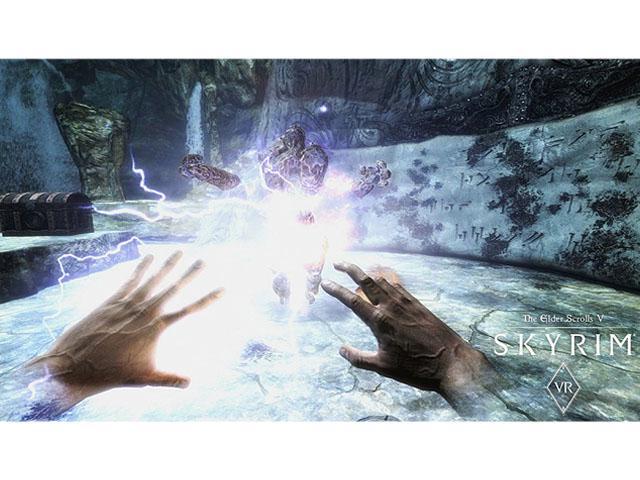 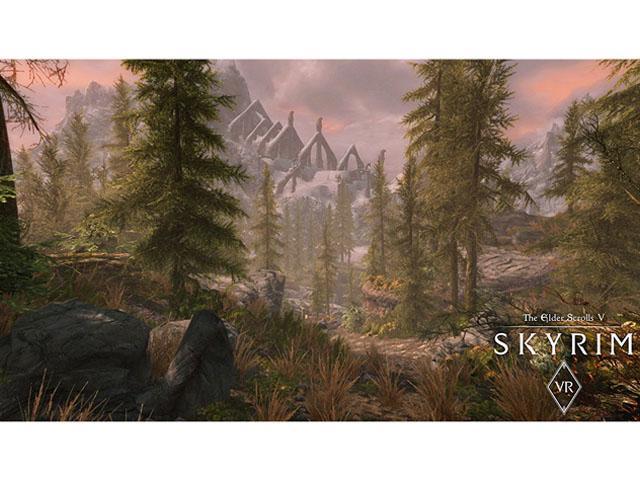 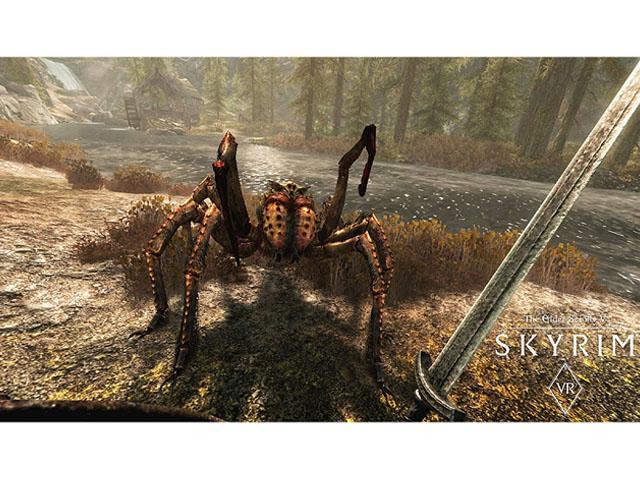 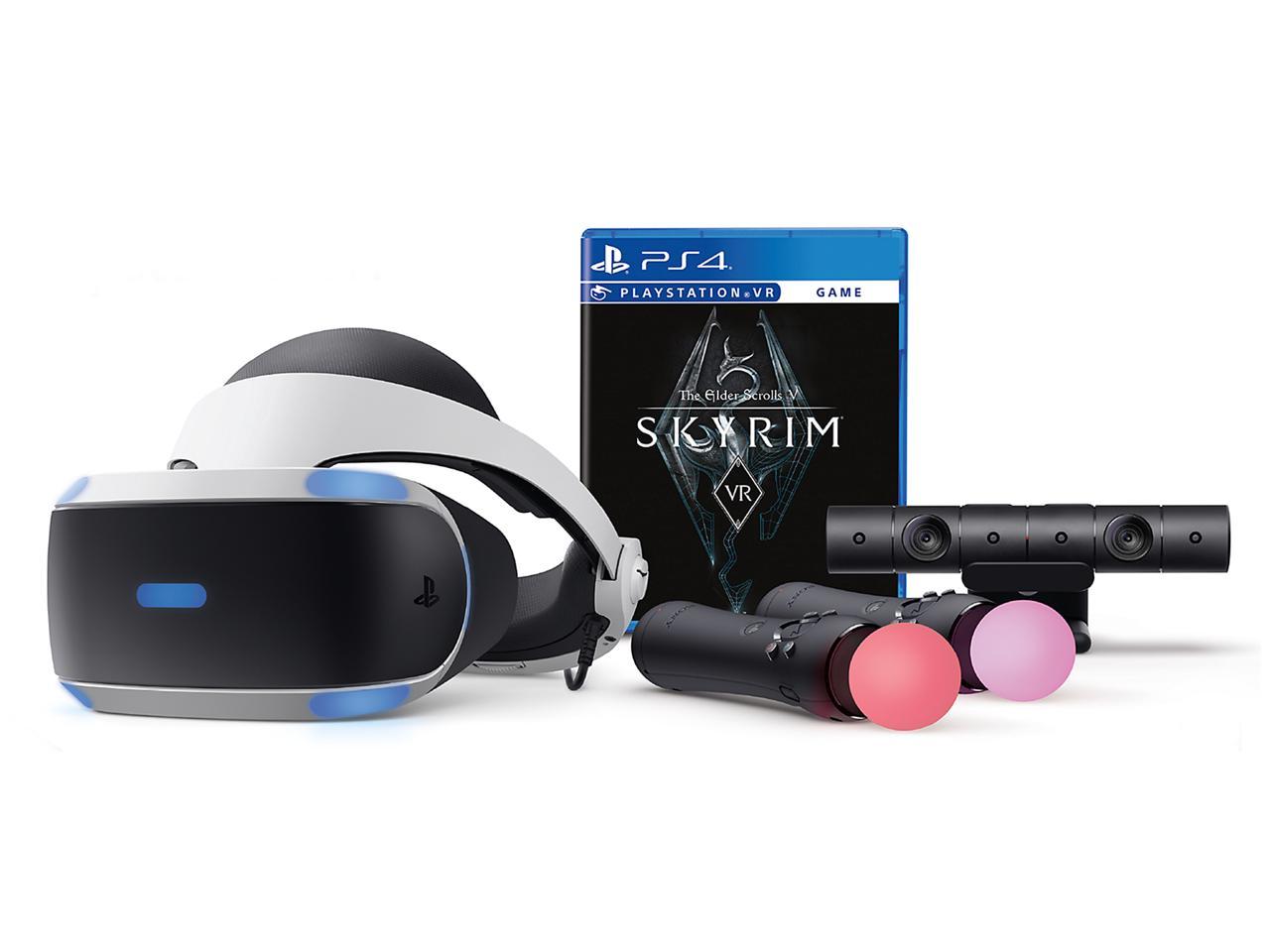 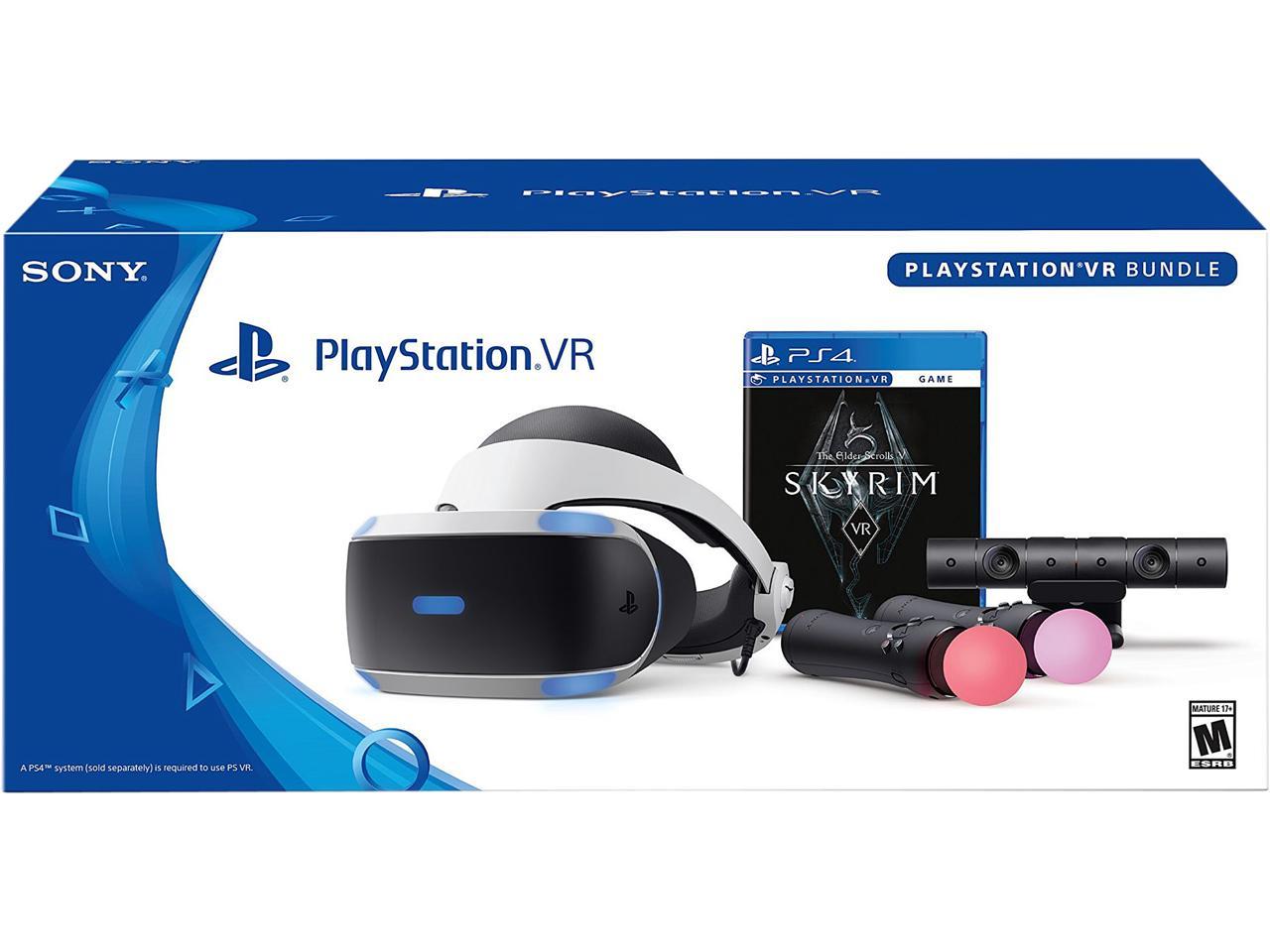 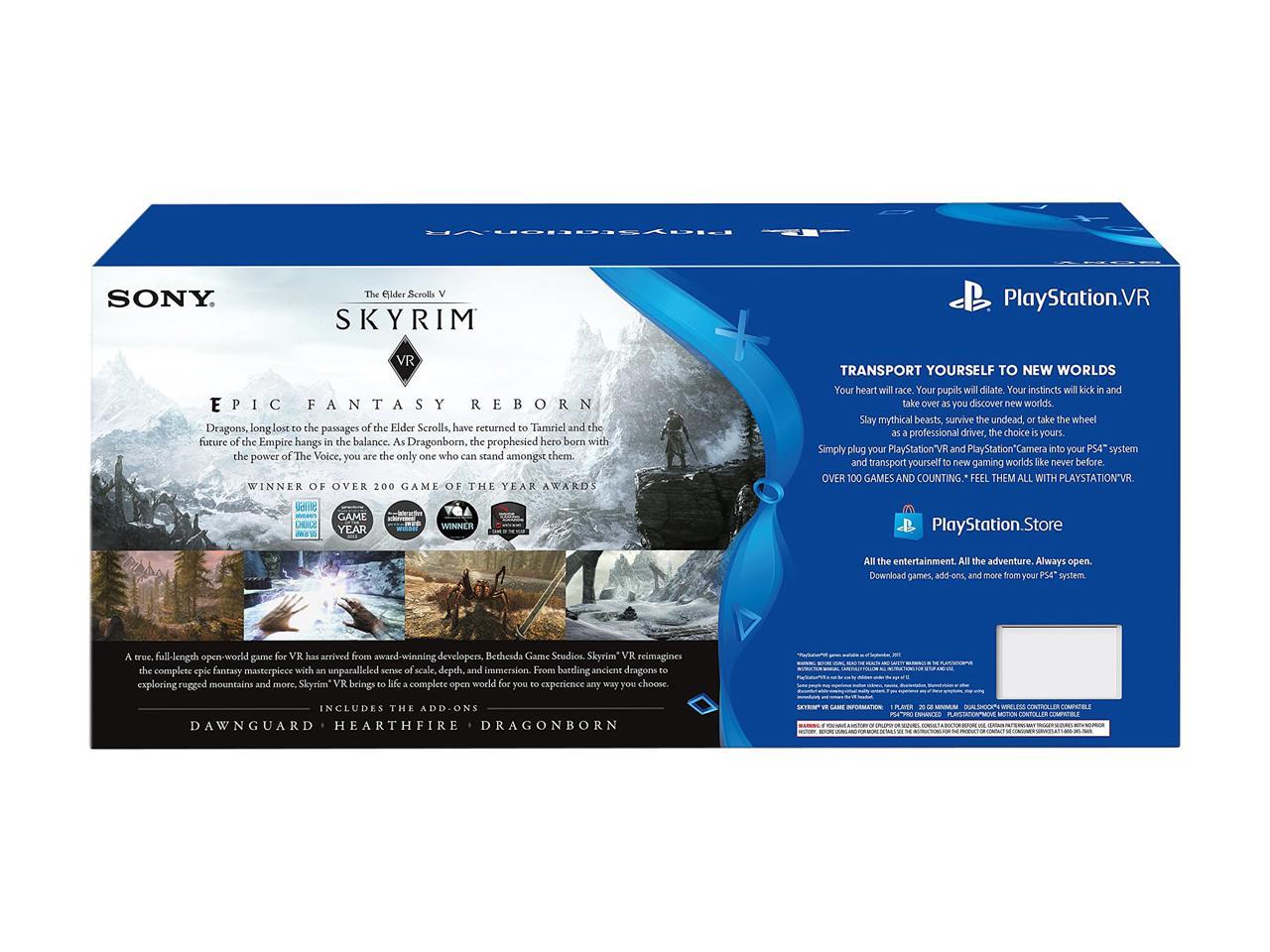 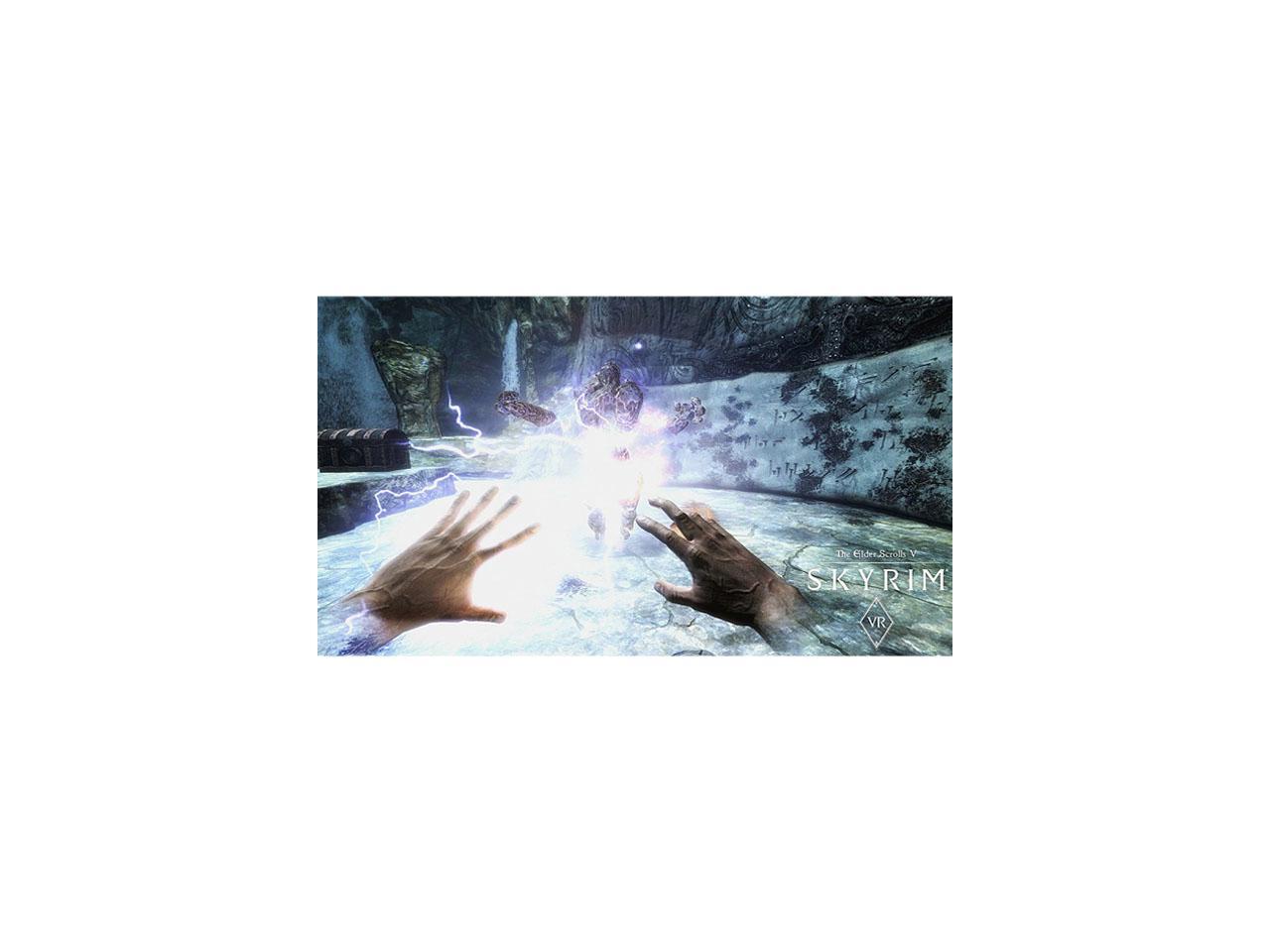 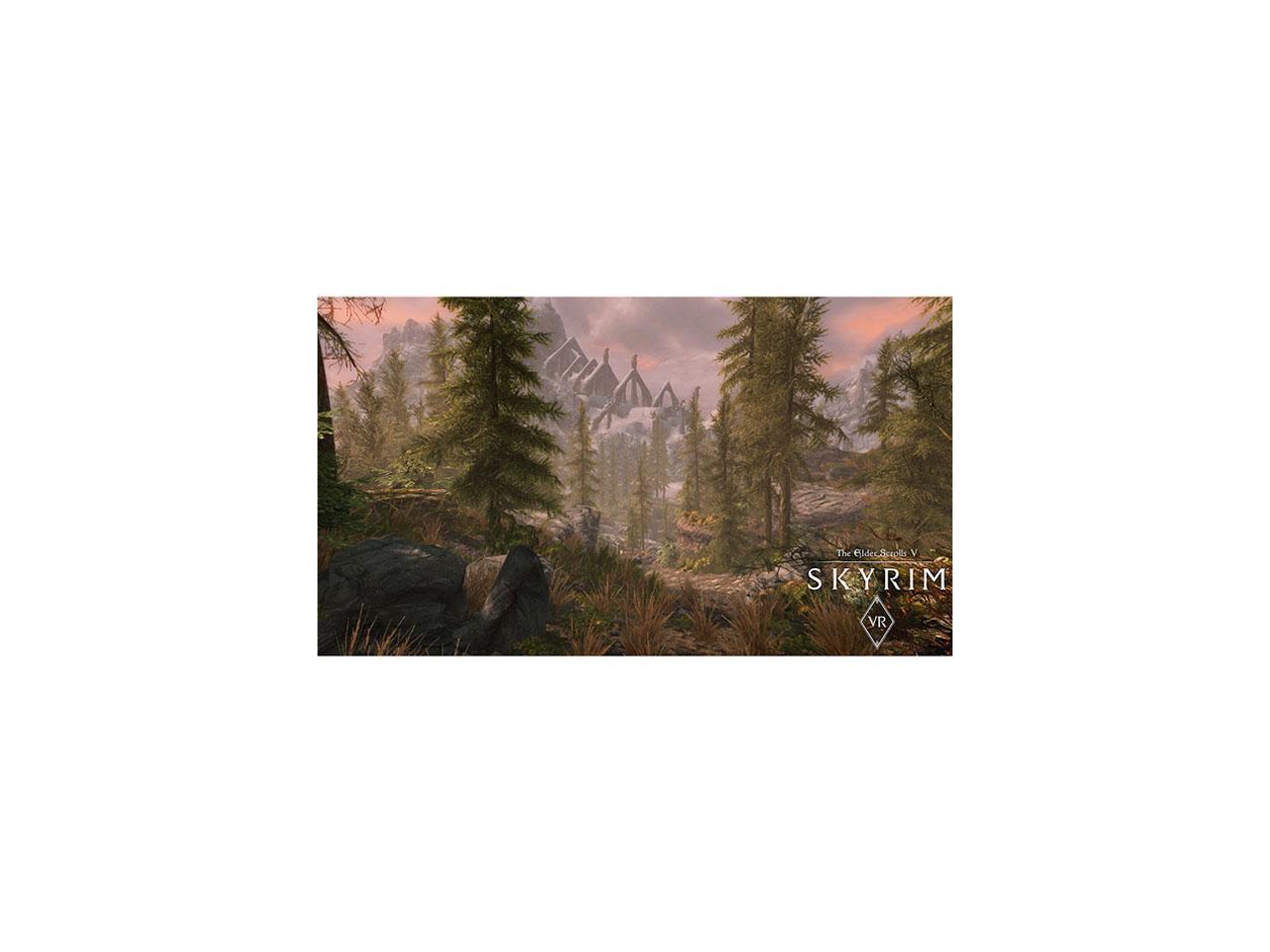 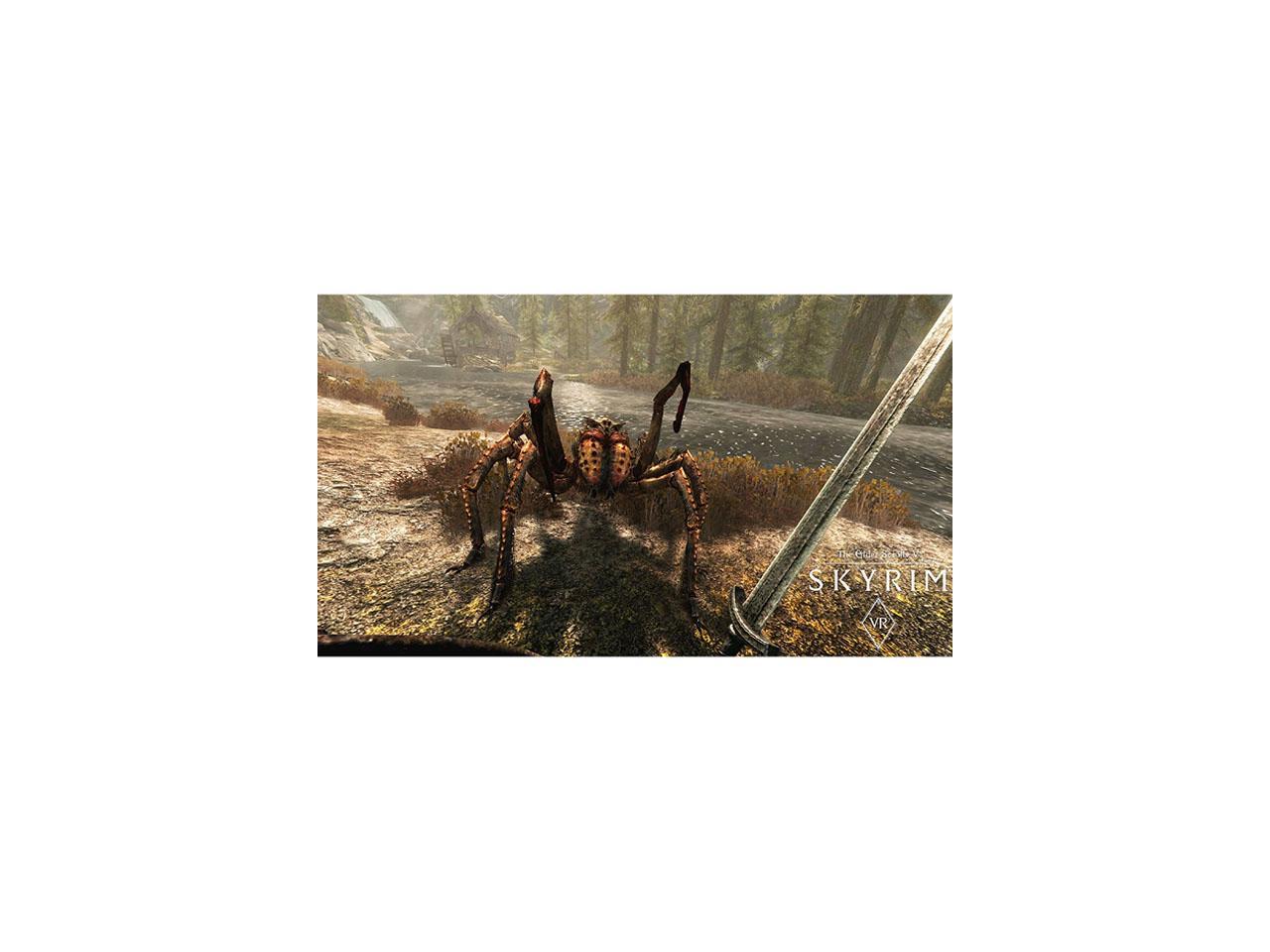 The PlayStationVR The Elder Scrolls V: Skyrim VR Bundle will vault you into the world of Skyrim in virtual reality, bring you to an incredibly immersive gaming world like never before. The complete bundle includes a PlayStation VR headset, a PlayStation Camera, two PlayStation Move motion controllers, and the Skyrim VR game.

Discover a new world of unexpected gaming experiences with PlayStation VR. Redefine your expectations of immersion in gaming with moments so intense your intuition takes over. Step into incredible virtual worlds and overcome new challenges in extraordinary ways. 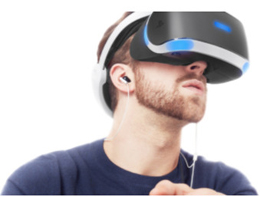 The PlayStation VR headset was engineered to be balanced, comfortable, and adjustable. It’s designed to feel like it's not there – keeping you free from distraction as you explore new gaming worlds. 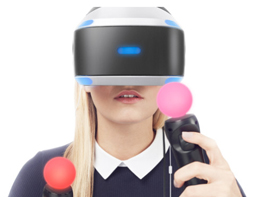 The feeling of ‘being there’ starts with what you see. Seamless visuals keep you connected to the virtual world through an expansive 5.7” OLED 1080p display running at up to 120 frames per second.

3D Audio with PlayStation VR means that you’ll be able to pinpoint sounds above, below, and all around you. Instinctively turn your head to the source of a single footstep and be able to judge its distance, just as you would in real life.

The Elder Scrolls V: Skyrim, winner of over 200 Game of the Year Awards, is reborn as Skyrim VR. A true, full-length open-world game for PSVR, Skyrim VR reimagines the complete epic fantasy masterpiece with an unparalleled sense of scale, depth, and immersion.

From battling ancient dragons to exploring rugged mountains and more, Skyrim VR brings to life a complete open world for you to experience any way you choose. Skyrim VR includes the critically-acclaimed core game and all official add-ons – Dawnguard, Hearthfire, and Dragonborn.

Dragons, long lost to the passages of the Elder Scrolls, have returned to Tamriel and the future of the Empire hangs in the balance. As Dragonborn, the prophesied hero born with the power of The Voice, you are the only one who can stand amongst them. 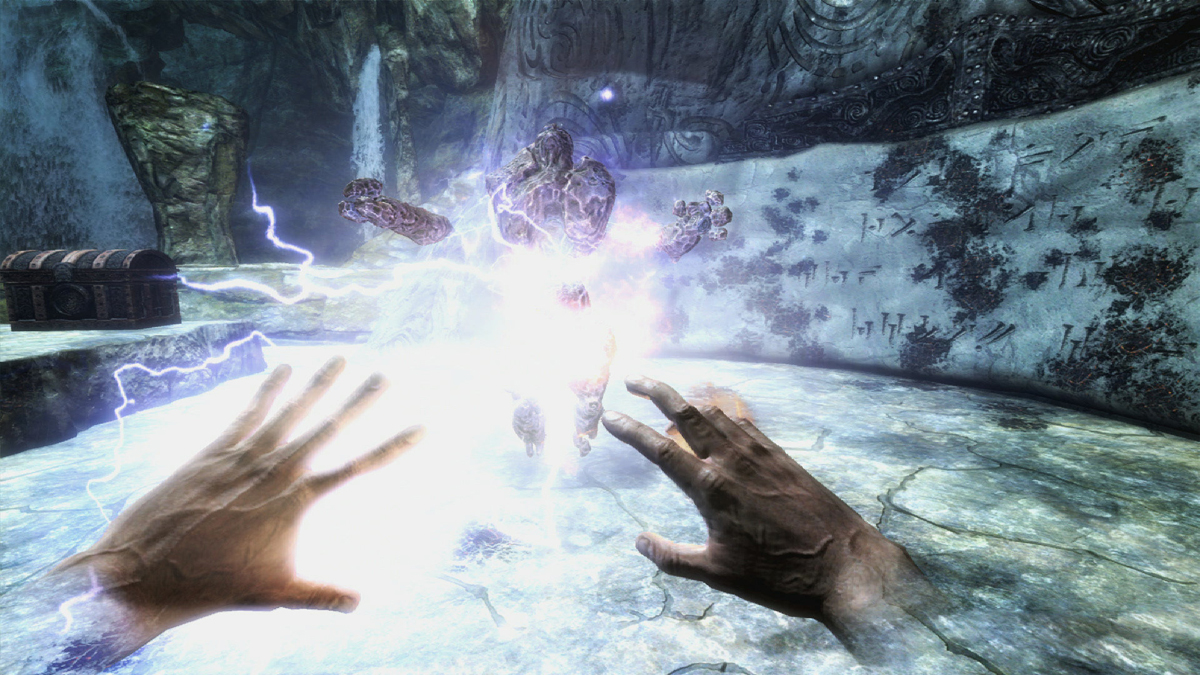 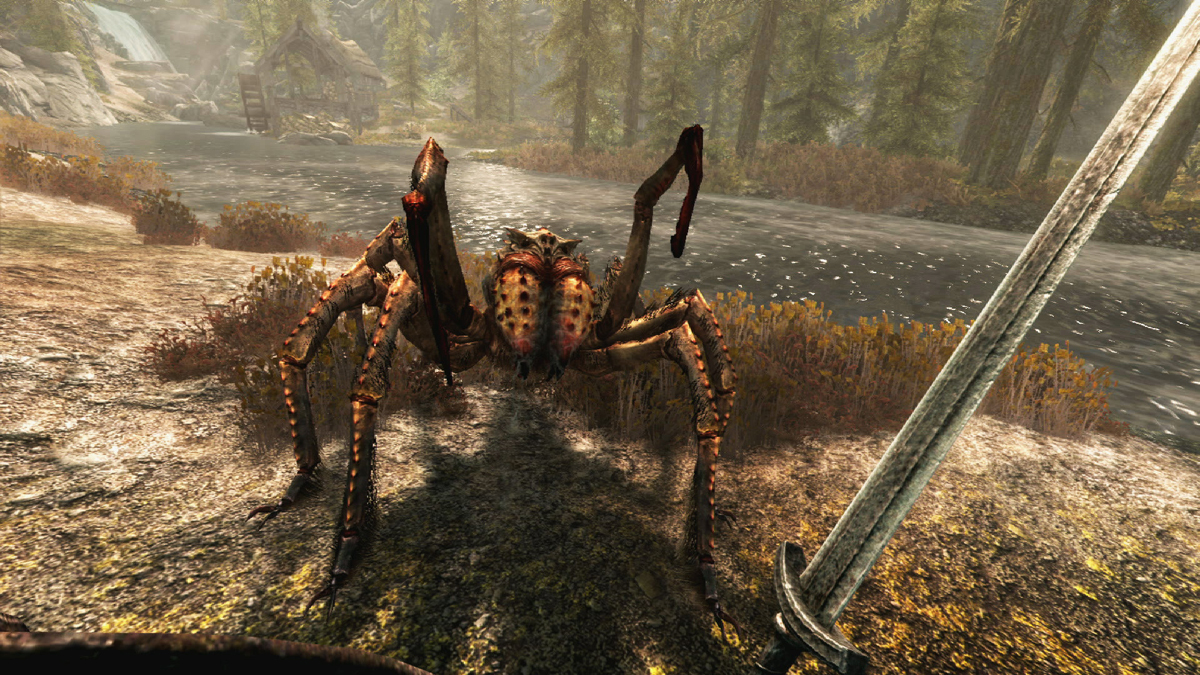 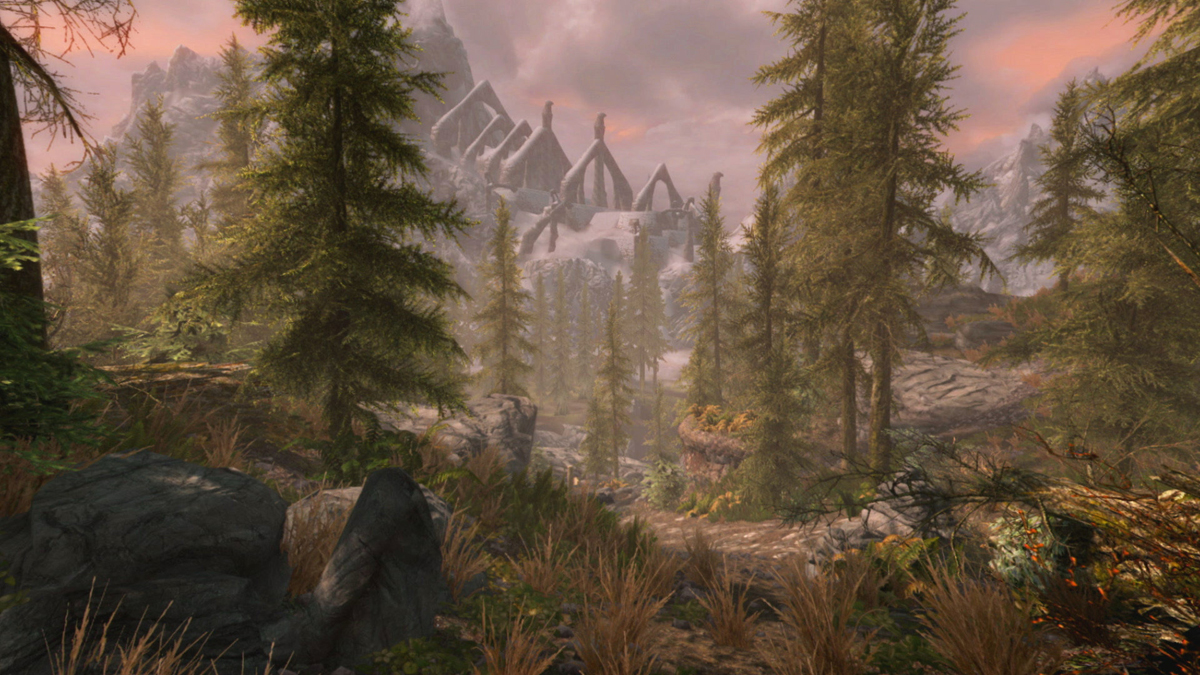 Learn more about the PlayStation 3002425

Cons: Price, lack of content at time of writing, cords galore to a hub box to get it working.

Overall Review: No move controllers yet, but I am using a PS4 pro with it. I have not seen any issues with the frames dipping or aliasing. I can't five star it yet. That can't happen until the price drops and more vr material comes along. Beyond that, initial setup is tedious. All hdmi activity, vr or not, now gets routed through a hub box. The PS4 has a USB line and its hdmi cable to this box, then an hdmi to your tv. Power to the hub box (this covers power for the headset too luckily). Then it's a short cable to the headset, though they did throw in a generous length extension cable for that (eyeballing 12ft with extension. Then about a further 4-5ft from the hub box to the ps4)

Pros: Love the immersion and sense of scale. The Playroom VR is amazing and my daughter loves it. I love Thumper and Driveclub VR games. My wife really liked Allumette short story. Rigs multiplayer looks fun too. Can't wait for my games to come out.

Cons: Need to limit play time to about 30 to 45 minutes because I can get a headache if I play too long. In Driveclub the graphics are blurry in the distance but great up close.

Overall Review: I am interested to see what the Playstation Pro can do for the anti-aliasing in the games and for texture quality. Frames per second is great in all the demos I tried.

Pros: VR in PS4 is just incredible. xbox doesnt have this

Cons: i wish i could own every PSVR game after trying just a few games

Overall Review: I was Skeptical on VR for the longest time and was never really sold on it . I got this as a gift for Christmas and was incredibly amazed at how far we come with gaming . if your even on the fence about it just do it . i almost wish i would have joined in on the PSVR scene at launch . This bundle does include the updated V2 PSVR headset for those interested. This is Groundbreaking stuff and i am still amazed at how crazy fun VR is. SKYRIM IS INCREDIBLE ! its breathtaking just being inside the SKYRIM environment and fighting dragons with my actual hands. the Fov Filter ( Narrowing view when turning ) can be removed in the options. There will always be naysayers (not even Verified Owners) but if you dont believe try it for yourself. Certain big electronic retailers do PSVR demos on the weekends you can go and try for yourself. you really have to see it to believe it. honestly after playing Skyrim VR is kinda hard going back to 2D gaming.

Pros: - This works well with my PS4 Gold - Comes with camera and Move controllers which are a must for the PSVR especially the camera. - Comes with VR Worlds which is a great intro in the world of VR. - When I bought this I got Resident Evil for free.

Cons: - Cables from the Processor are a little to short for me. - The lens seems to fog up really easily. - Every now and then I have to re-center the game, for some reason It seems to get confused. - Going out of bounds or out of the cameras view.

Overall Review: - Make sure you have plenty of room, even though you don't move around to much, you still need plenty of arm room. - Buy a stand and charger, that can charge the move controllers and Dualshock 4 controllers and hold you VR headset.

Pros: The PsVr is really good! And it is just so cheep probably the best price one out there!

Cons: The game is sort of ok but not really.

Overall Review: But it is still cheeper than getting just the PsVr alone so this is great if you want the bundle!

Overall Review: I would recommend this product if you already have the camera and move controllers for some reason but don't have the headset. Otherwise I'd look into buying a bundle that has everything needed to use actually use it.

Cons: -Well the 1st the HDMI went bad in the headset.(new eggs Sent me new one) -Just too many wires -Need a webcam to work. -Everything has to be Plug in to power for your PS4 to work even if not using the vr headset.

Overall Review: -If you don't have gaming Pc Then I would get this. -If you have a pc get a Quest and get Virtual Desktop and won't have any wires

Pros: Item arrived earlier than I expected and was easy to set up. Works great!!!

Overall Review: I would recommend this product to anyone that likes gaming