Feel 100% satisfied with your purchase -- with no restocking fees & no return shipping costs* within 30 days of delivery. Learn More
Price Alert
Add To ListFound on 4 wish lists 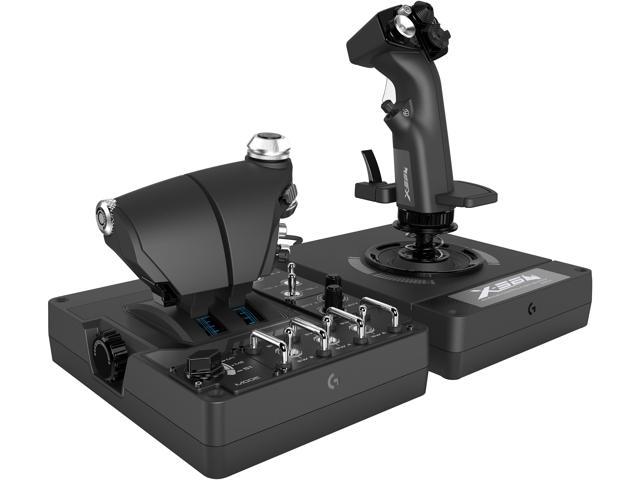 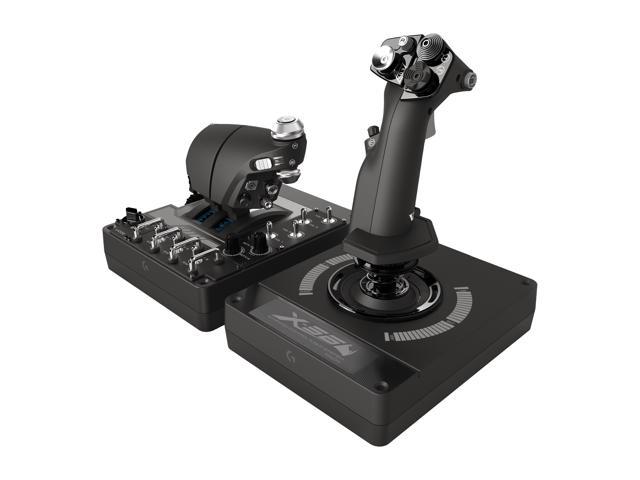 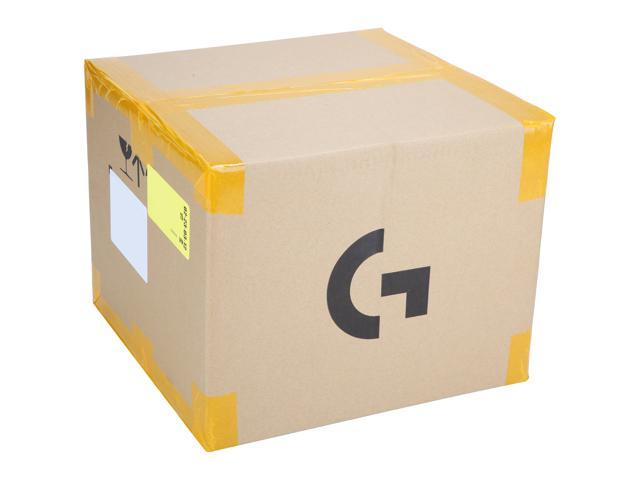 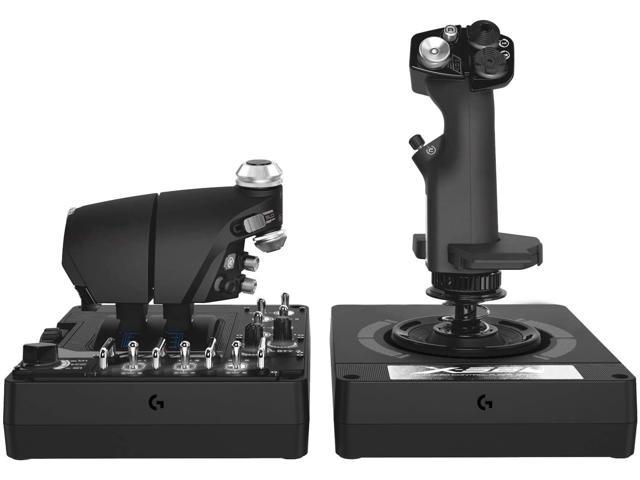 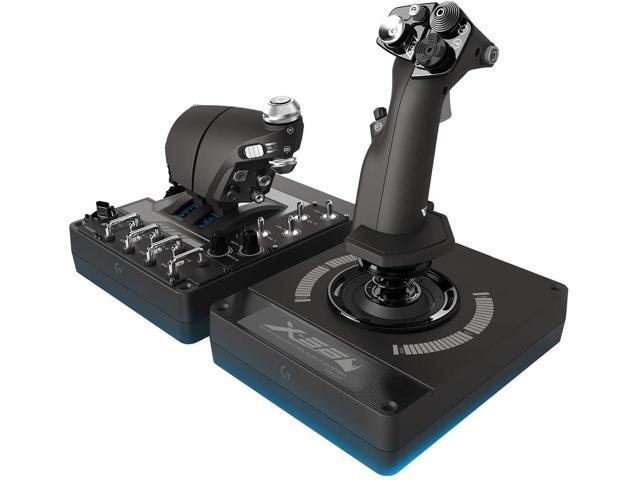 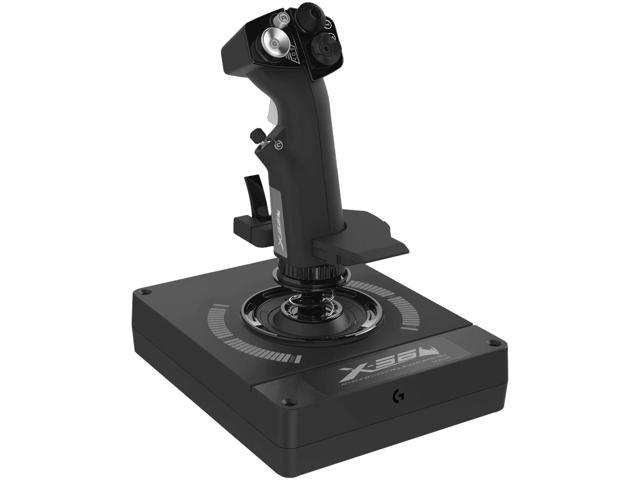 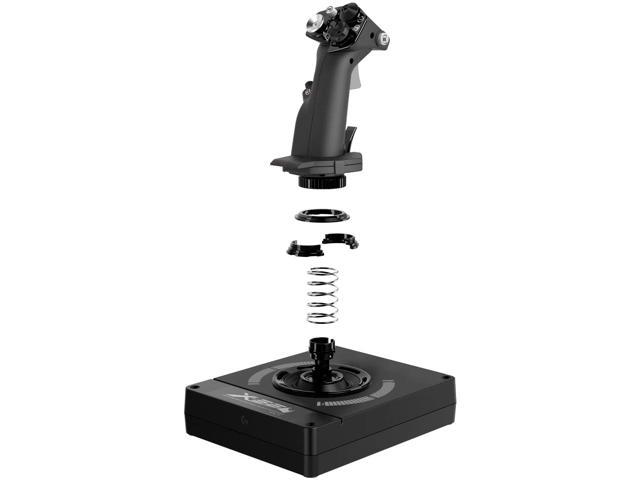 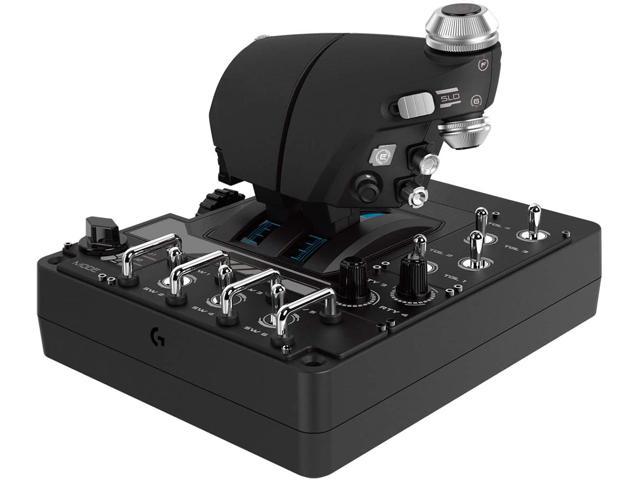 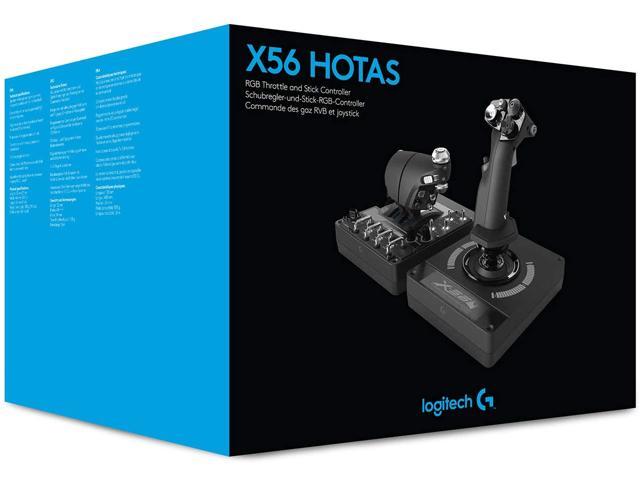 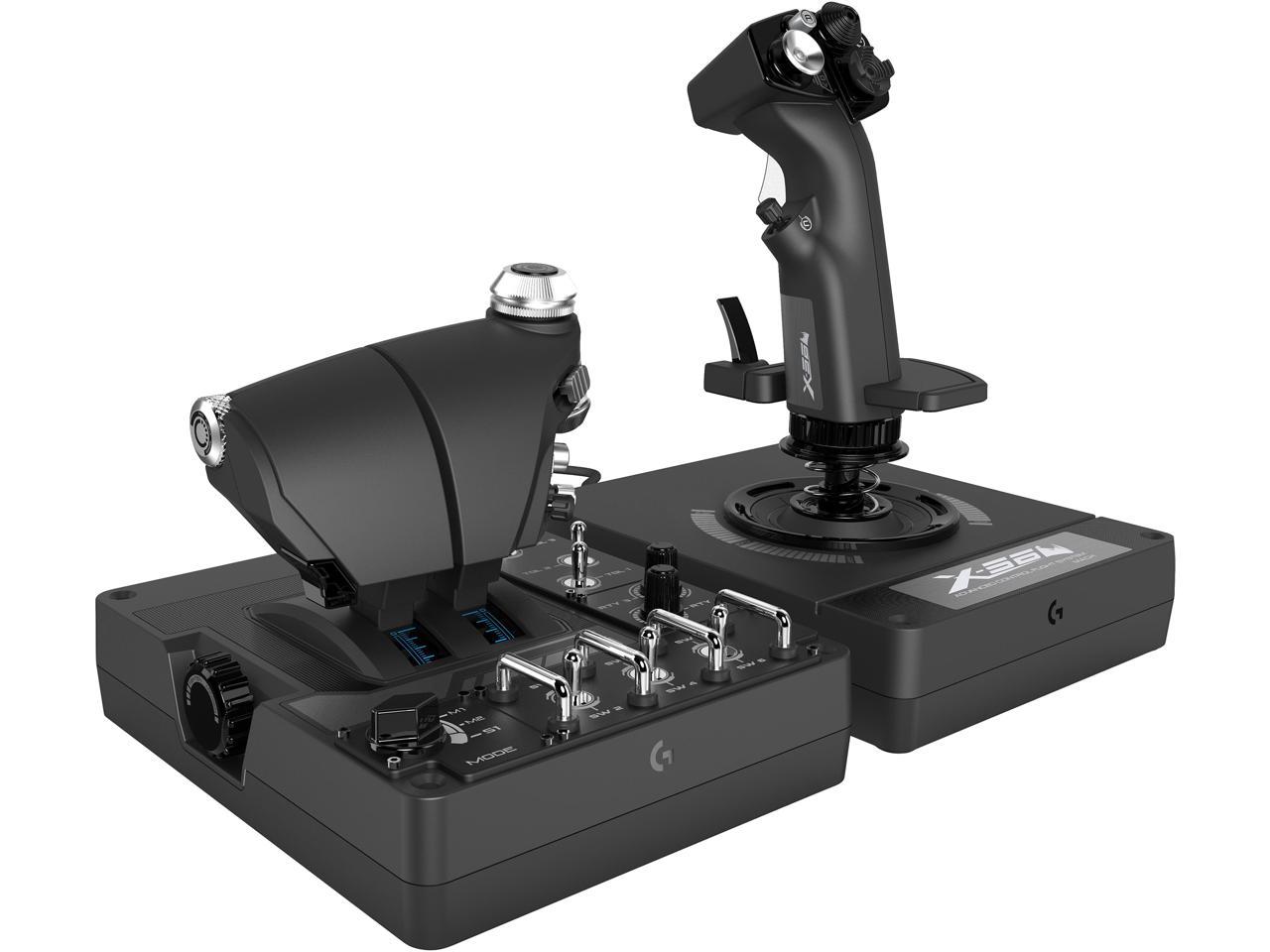 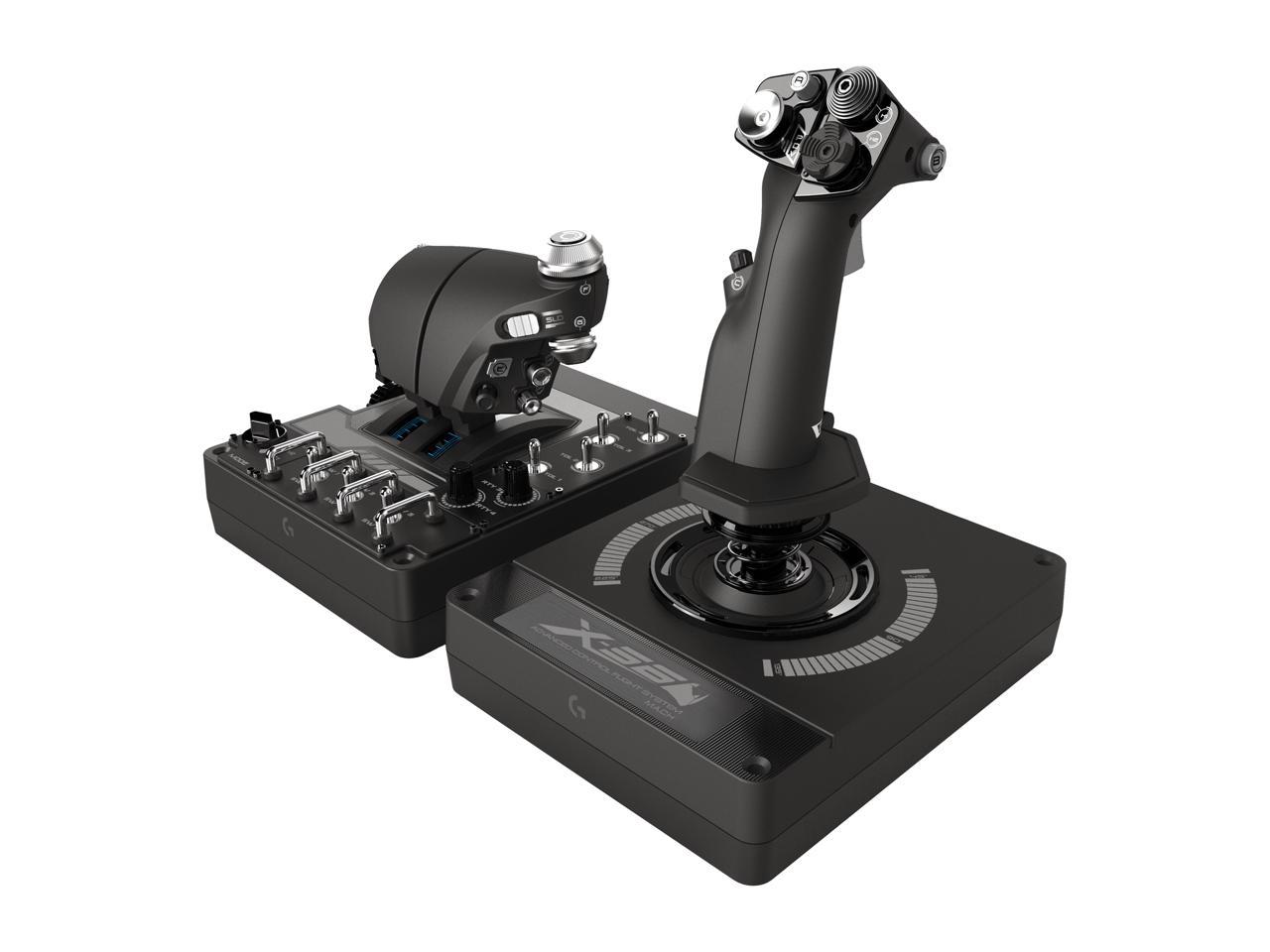 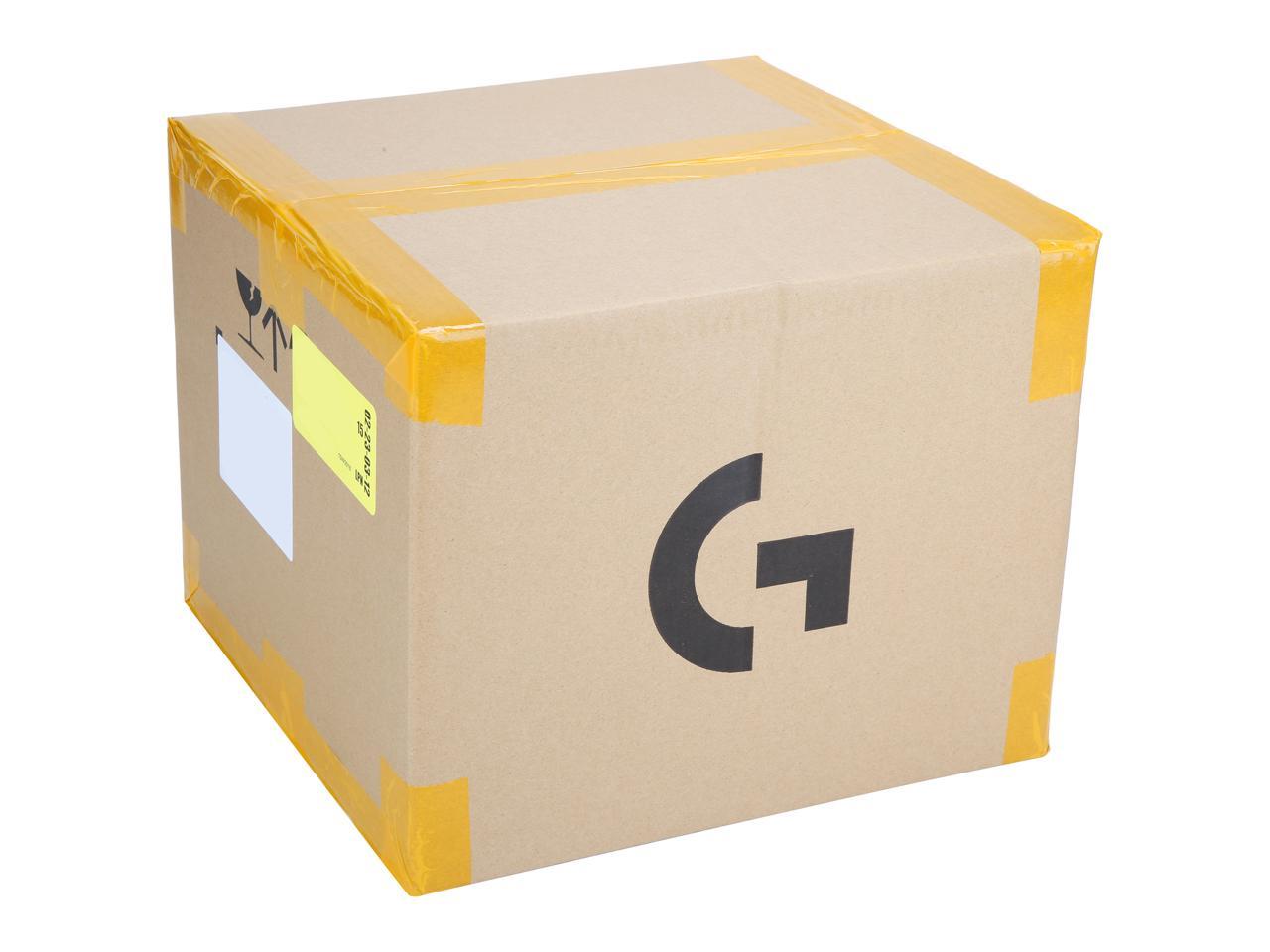 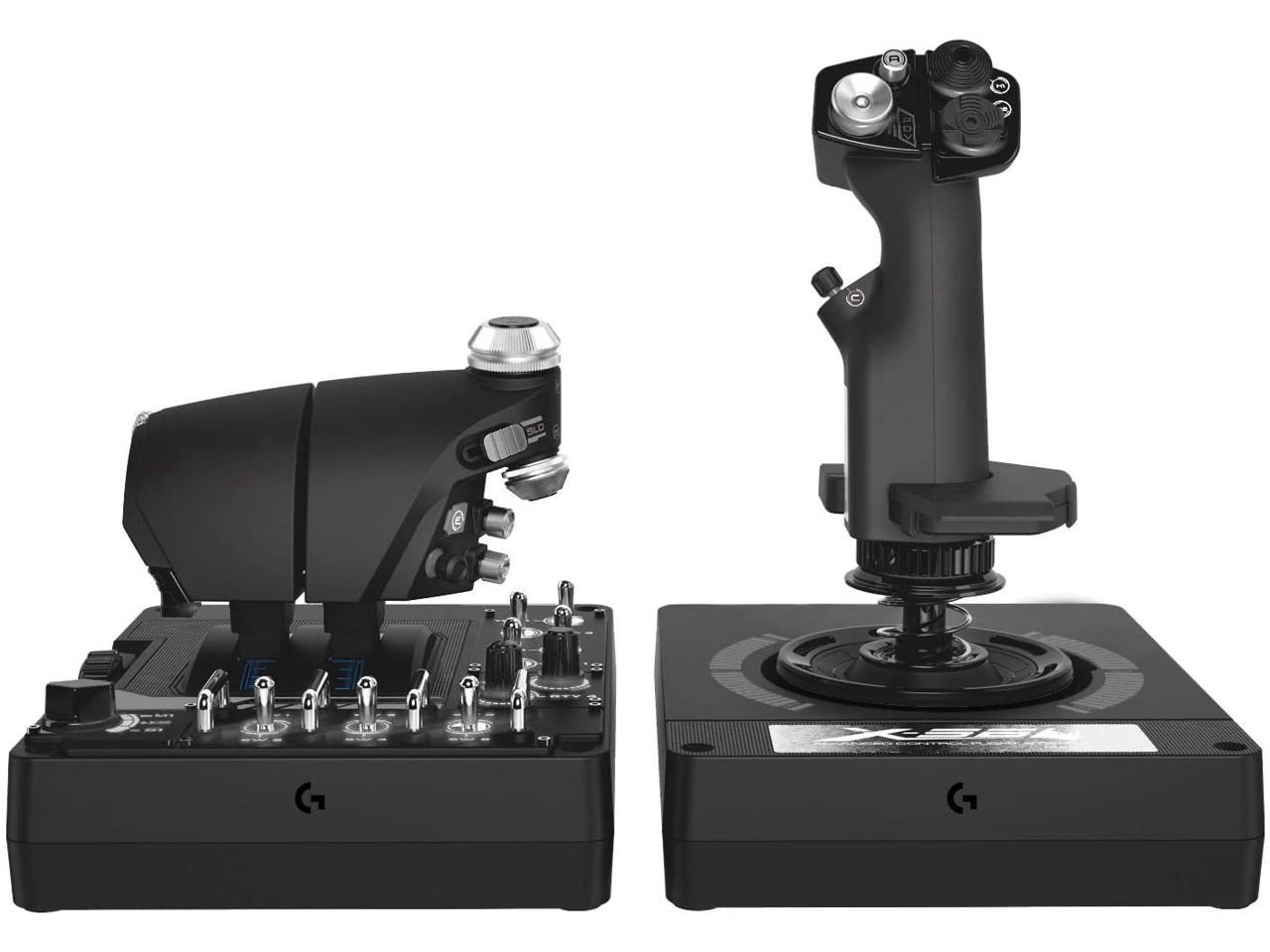 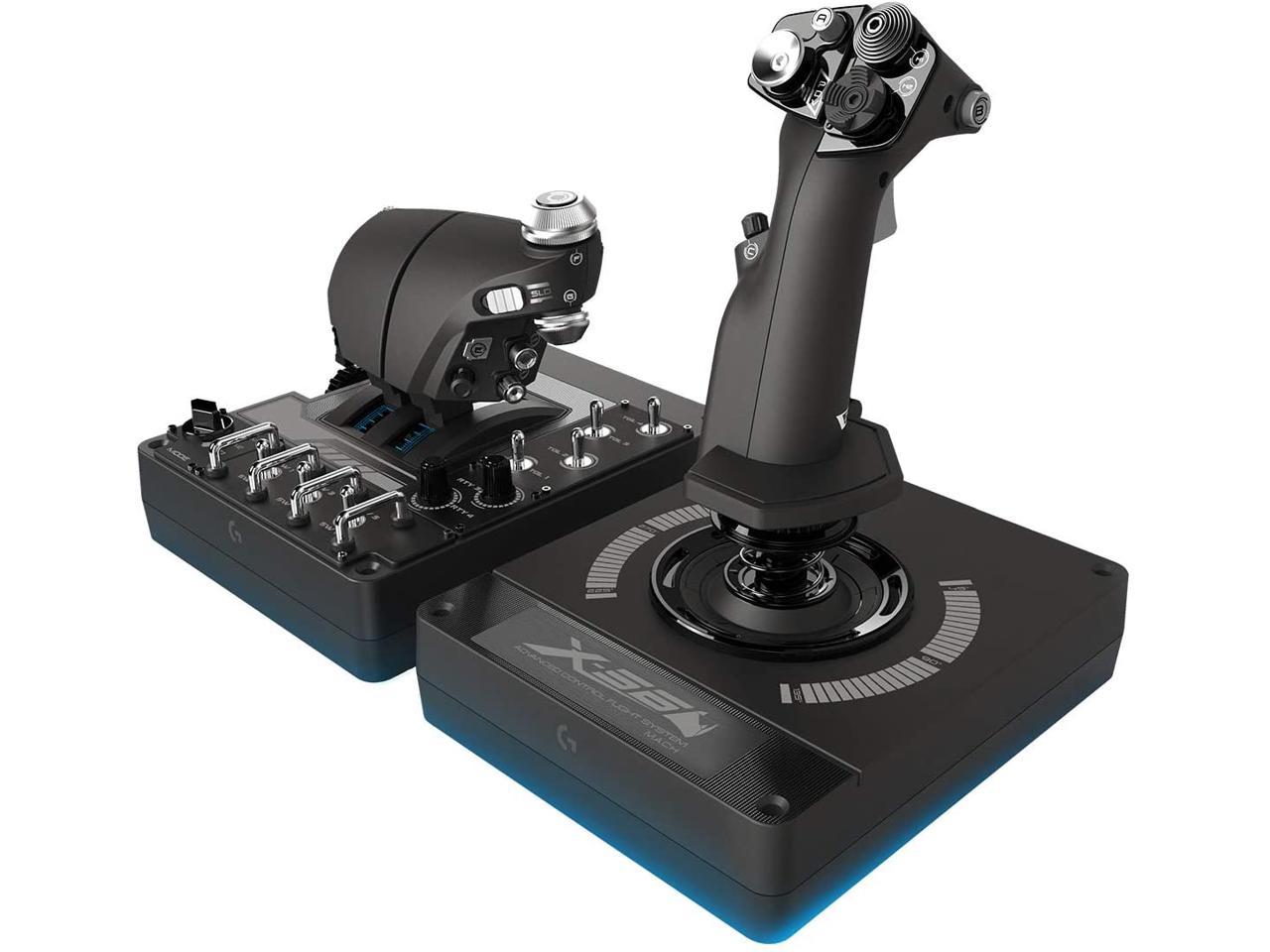 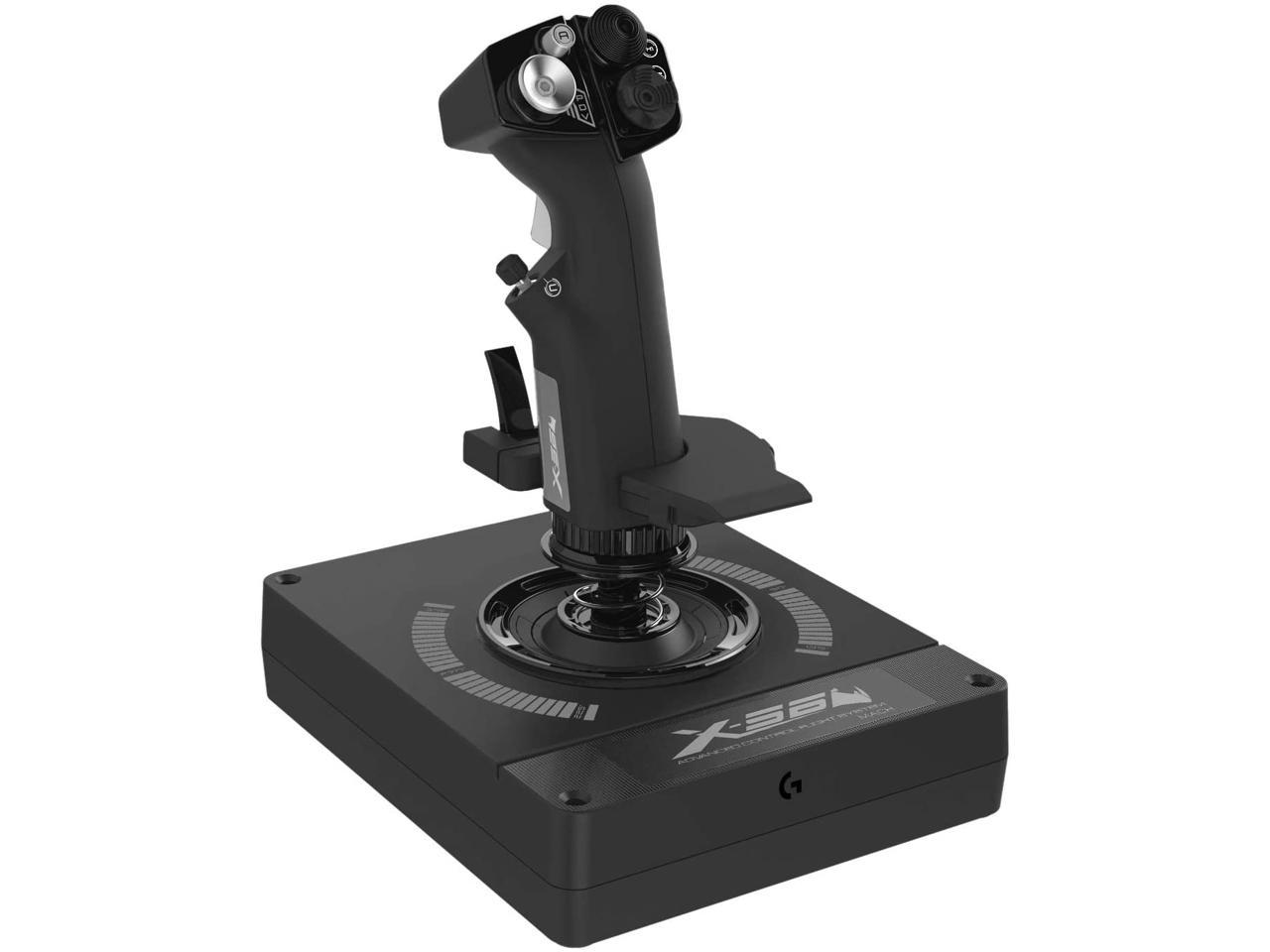 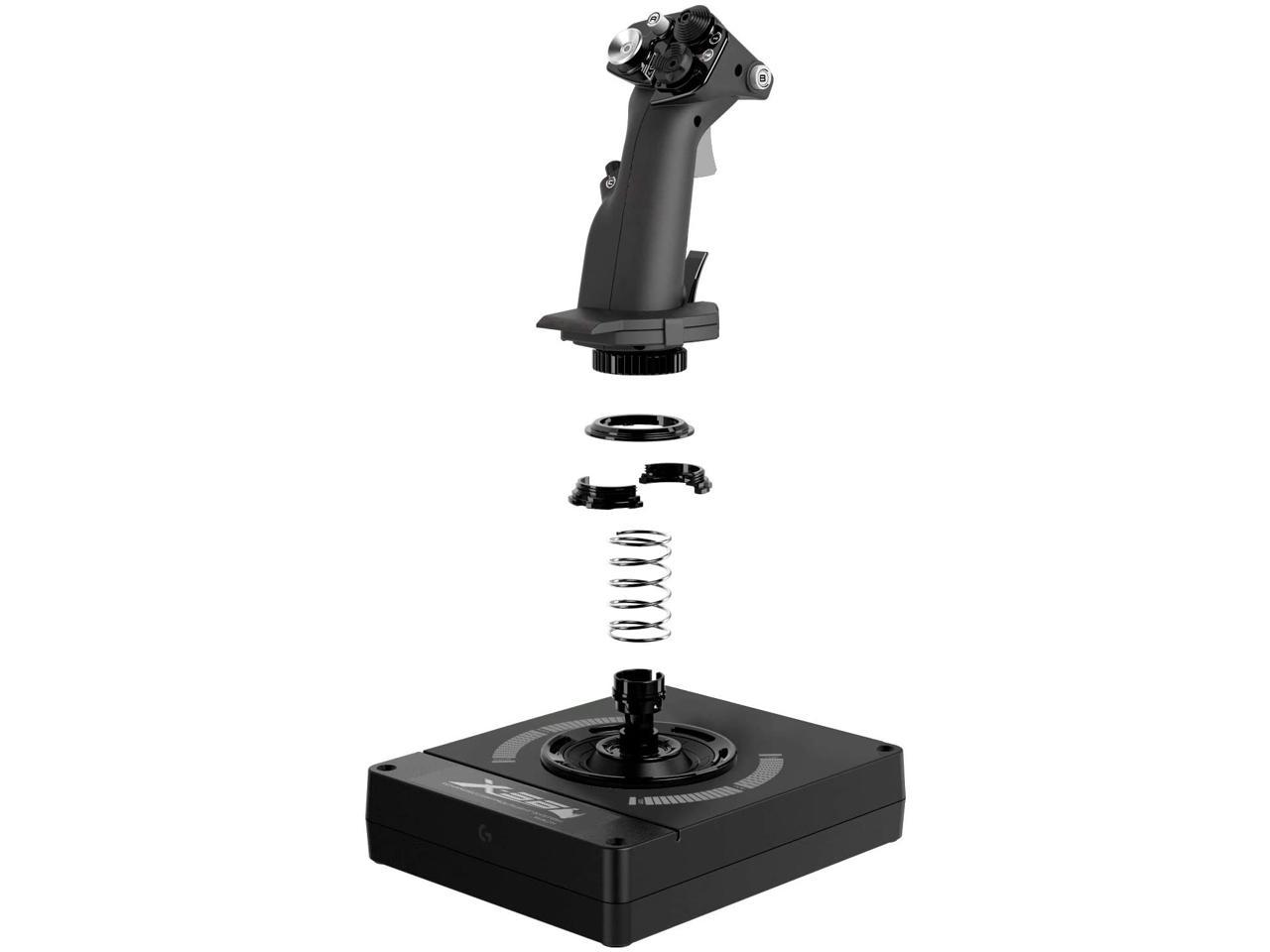 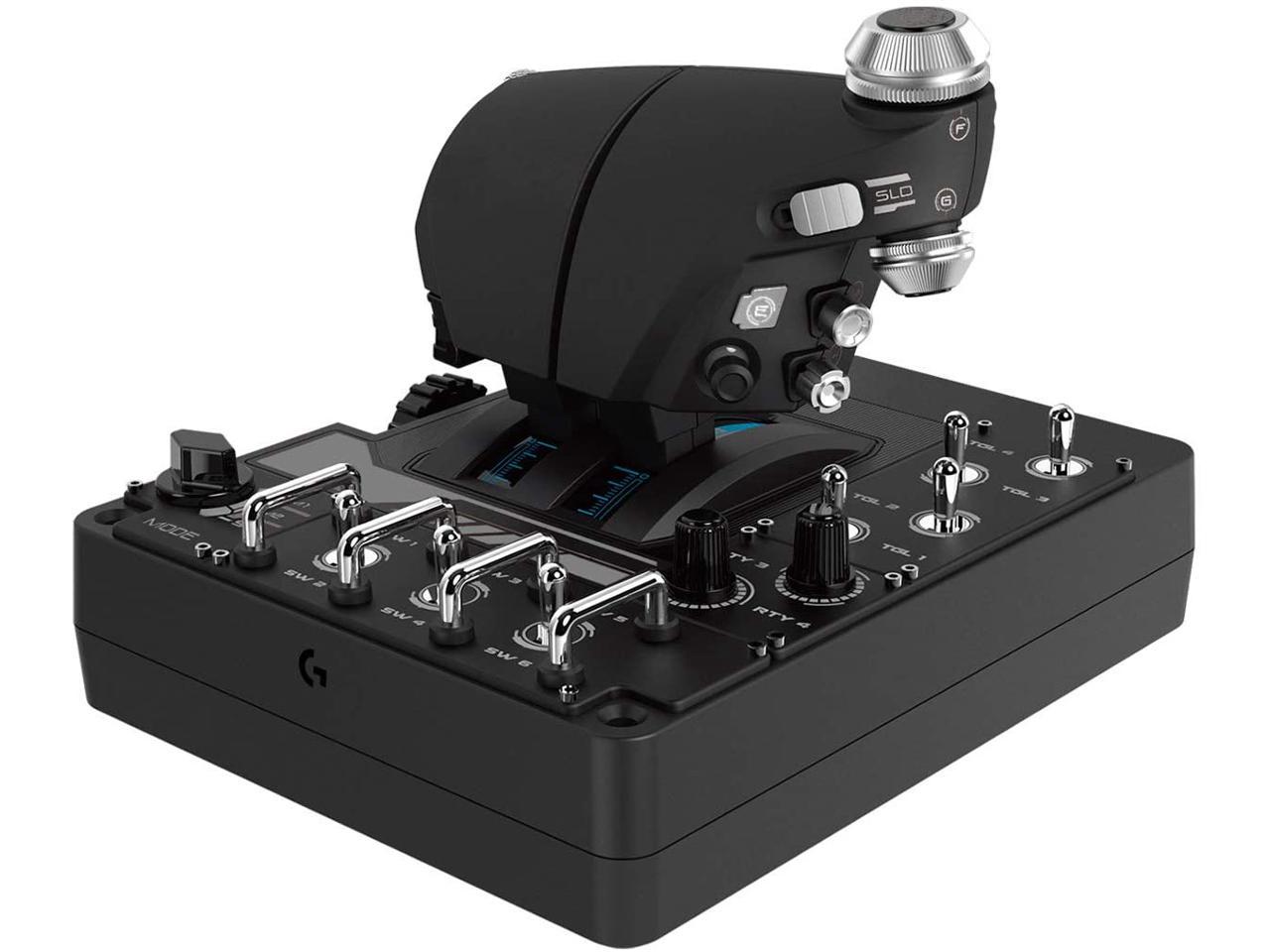 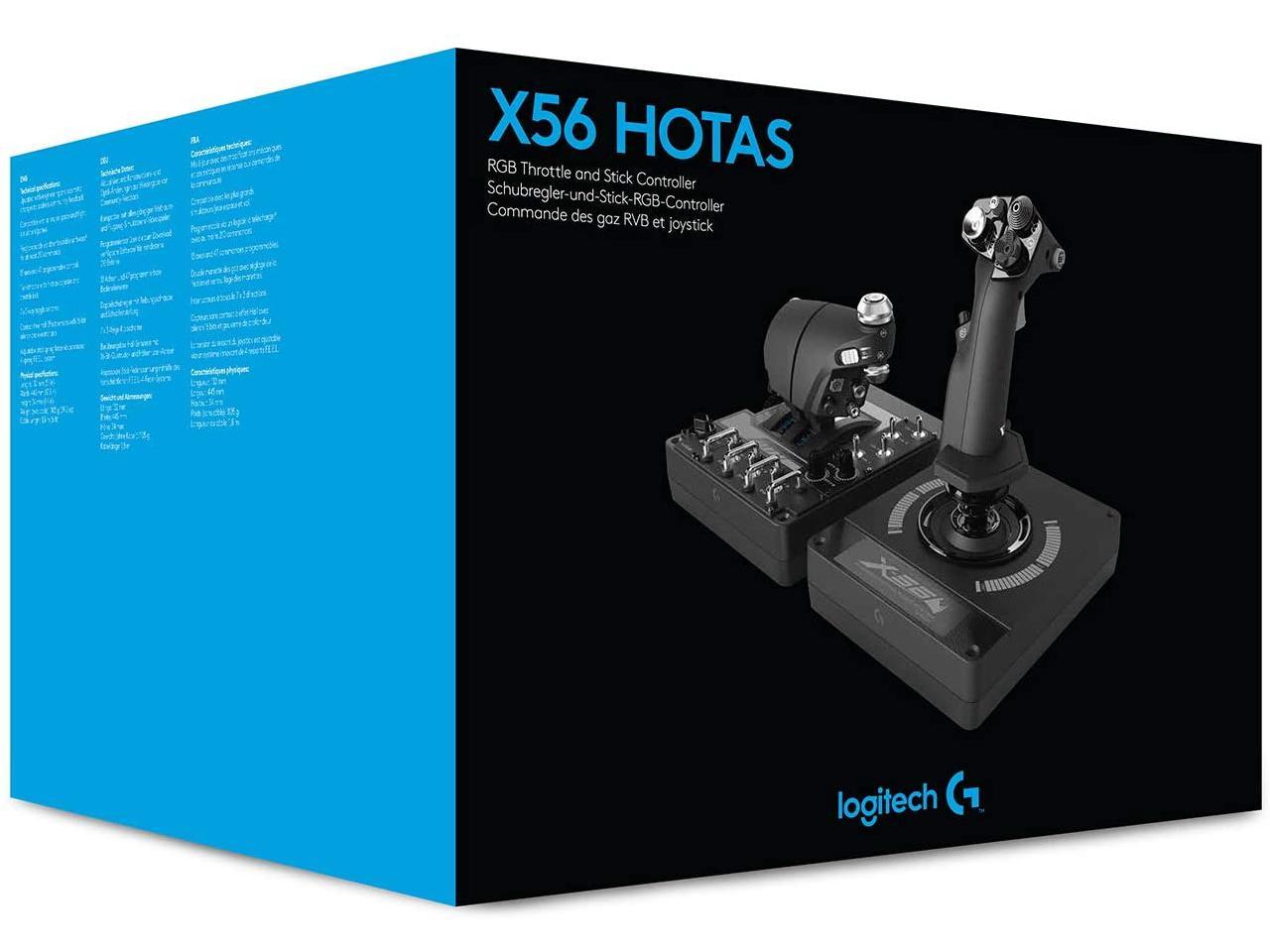 Easy Setup and Customization With the Logitech Flight Stick

The Logitech X56 Rhino has USB connections on both the stick and throttle feature an easy plug-and-play setup. In addition, the flight stick has 189 programmable controls that let you set single-key input for in-simulation commands like target lock, afterburner and more. There are also options for assigning timed and macro commands.

Use the Logitech flight stick with a variety of virtual reality hardware for intensely realistic gaming. The Logitech Pro Flight X56 Rhino pairs well with VR headsets, due to its touch-responsive controls and similarities to VR software controls.

The mini analog sticks located on the thumbs provide enhanced control and act as additional buttons for more options and better freedom of movement. Several contact-free sensors increase the system's sensitivity and create an unbeatable flight experience. The multidirectional platform on the stick and throttle of the X56 Rhino offers additional control from any direction. The Logitech G Saitek Pro Flight X56 Rhino stick also has an adjustable or removable spring tension system as an added customization options.

Pros: - All the buttons work. - The toggles feel good and work well. - The shipped version was the newer black/grey not the blue - New Egg has the best price that I could find $202 - No jitter in any of the axis inputs. - Logitech honored their warrantee. - The extra analog thumb sticks work well for elite and also for cursor slew for DCS. - The RGB settings work on the throttle - Lots of configurability with the software

Cons: - Antenna knobs on the throttle wobble. The plastic knob doesn't mate well with the pot shaft. - Stick has some slop near center because of how the vertical spring design is. You have to increase the stick dead zone to deal with the sloppiness. - To much goo in the throttle making it very stiff (easy fix) - Z axis is stiff could use about 1/2 spring tension. - The two range knobs on the throttle base could use a center detent. - The Saitek app will crash or get really slow closing the app doesn't help (you have to kill off the process). - The Saitek driver (SaiKa221.sys) caused my PC to blue screen (once so far). - The joystick RGB color doesn't match the set color in the app nor does it match the throttle. You have to unplug the throttle and set the stick color by trial and error to get it to match the throttle. - Once in a while a random button on either the throttle or stick will register as being pressed when it wasn't. - RMA process is email only and can take 2 days for them to respond (or longer)

Overall Review: Update: The mini analog stick on the joystick has stopped working correctly. The Y axis seems to have some sort of short in it and prevents it form moving some times. :( update 2: After 1 month I was able to get a replacement from Logitech that function as expected. Instead of sending in the malfunctioning x56 they had me destroy both stick and throttle, then send them proof of the destruction. Before destruction I pulled the stick apart to find the issue. The mini stick stopped working due to a bad strip of a wire that caused it to snap. The X56 support is email only, if you call them they just say to use email. The tech person responding was helpful and worked through the issue. However, email responses can take 2 days each time you send a response. This means it took me over a month to get a replacement. I received a black/grey version not the pictured blue one. The box had a QC pass date of 11/17 which is probably Logitech going back through all of the old Saitek parts trying to find ones that they could sell. Ok so for around $200 there isn't much of a choice for a HOTAS system that have enough buttons to be used with VR. I play Elite, DCS and other sims. I wanted a setup that would work well with space and plane sims. I also didn't have to go searching for keys on the KB with my VR gear on. My choice was the X56 or a TM Warthog (which sets you back $560+ (no Z axis on stick so you need to also get rudders). I read all of the reviews out there and all the issues with QC with the x56 and still decided to roll the dice. At $202 the x56 here on new egg was $47 cheaper than anywhere else. This allowed me to feel good about also buying the Square Trade warrantee with it (I have a feeling I might need it). The added analog sticks work well for me and are great for thrusting in Elite or using the cursor slew in DCS. The ergonomics on this controller and stick are fine with my hands. The stick rest plate could have been better/adjustable. If you use the optional pad it makes it hard to use the pinky button. This could have been a 5 star hotas if they just would have spent a little more attention to detail and quality. Yes it works and does what I need it to. Logitech either needs to fix the issues or just scrap the line and build a better HOTAS. I'll continue to use the X56 until something better comes a long but that might be a while.

Pros: Plenty of buttons to configure Good smooth motion on all axis Good customer support and replacement when I had a problem.

Cons: First one's LEDs on the stick went haywire within a couple weeks. This was replaced promptly by the company though. Occasionally the throttle led's will flash once and trigger a couple of the switches at random when it happens. Not sure what the cause of this is. It happened on both the original and the replacement. Some people suggested using an external powered USB hub, which I purchased. This did lessen their frequency but it still happens occasionally.

Pros: The stick is great for playing Elite Dangerous. I'm able to bind almost every function and still have a few buttons left over. The high-precision on the stick axes is also nice.

Cons: There were a few quality control issues with this stick. I'm currently moving through a warranty claim with Logitech. 1. The pinky rocker sometimes gets stuck in the up position 2. the thumbstick on the throttle sometimes gets stuck after being pushed downwards, and has to be brought back to center manually. 3. There's a considerable misalignment where the two halves of the throttle clamshell meet at the top, which is very noticable 4. The slider switch seems to be non-functional. 5. The thumbstick on the stick seems to have a 'crunch' when spinning in a circle or hitting one of the extents. 6. The z-axis was very squeaky. This was solved by applying some light grease to the top surface and threads of the locking ring.

Pros: -I like the design and feeling. The numerous buttons and joysticks have a smart placement, it is not for small hands, fingers with long reach allow not moving the hand position.

Cons: -I don't like that it is very light and that means you have to smooth the resistance on the thruster or else you move the entire thruster pad.

Overall Review: From the choice of the market I would say you get for what you pay for. If you're an occasional, maybe a cheaper model would suffy.

Pros: Responsive, plenty of controls to bind. It feels nice using it, Smooth motion. Almost as good as the TM warthog.

Overall Review: Not a bad buy. Especially if you're using dcs world.

Pros: -Big and beefy -good tension in stick spring and throttle control -many different switches and buttons have made DCS even more enjoyable -multicolor RGB's are a nice touch for larping in an F16 or Tomcat

Cons: -center deadzone is a bit large for my liking (I hope and figure there is a way to tune this, but have yet to find an answer via cursory peeks through the settings) -bottom toggle switches do not lock into up or down positions which is unfortunate, but not terrible -deadzone on some of the axes for the rotational knobs can move around when placed into their notched neutral point (I use for camera zoom and can cause the game to jutter in and out of zooming rapidly) which isn't a huge deal, but would be nice if they didn't. Easy fix is just to adjust it past or behind that point

Overall Review: At the $300 price point, this HOTAS is hard to pass up. Provided I do not have any mechanical issues in the future this is a great piece to upgrade your setup or a great place to start from. There are a few things that could be better with it, but if wishes were fishes we'd all be anglers. Overall an 8/10.

Pros: A lot of buttons and switches.

Cons: It came with play out of the box, the reason I got rid of my old one in the first place was that it had so much play it was unusable, to pay 250$ and have it feel so cheap and have play (Joy stick doesn't stay centered unless I hold it there) out of the box is just ridiculous. I don't recommend you buy this.

Overall Review: It's a design that's been around since the Xbox 360, old and cheap.