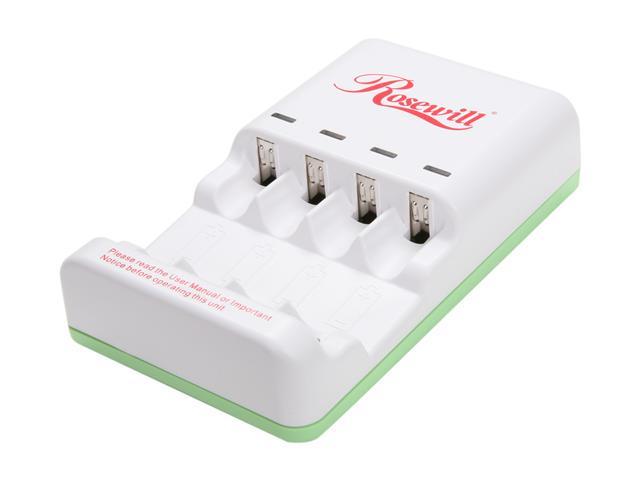 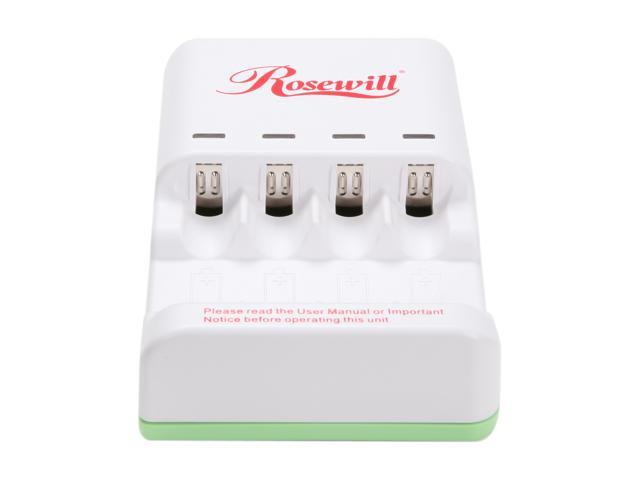 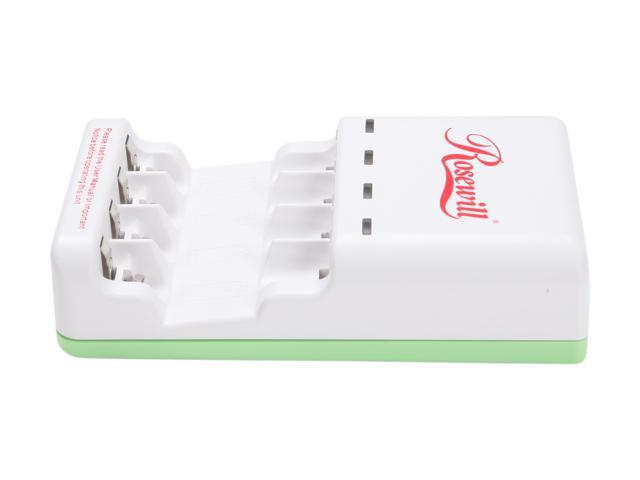 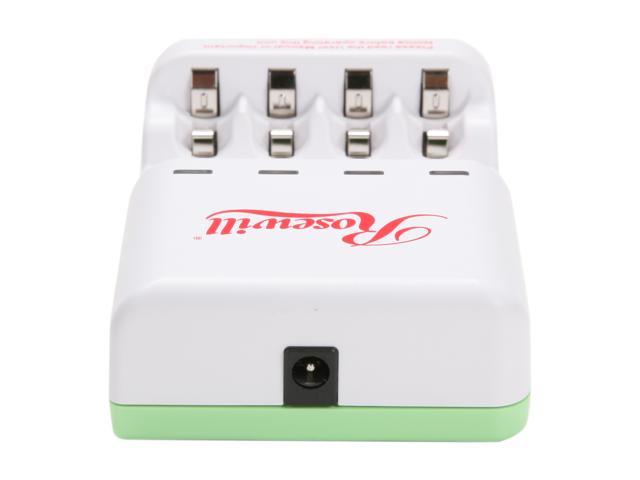 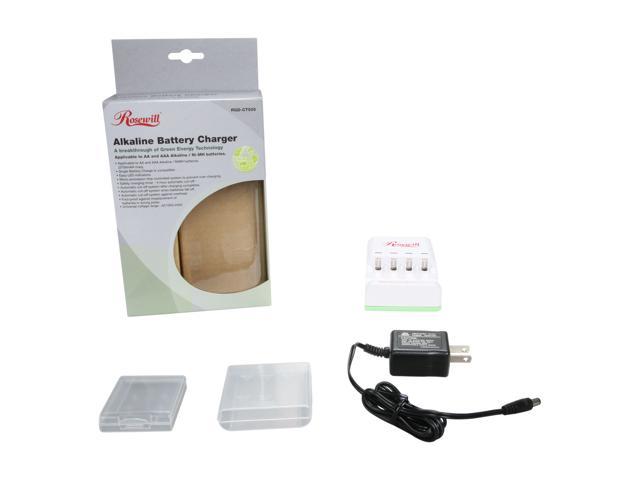 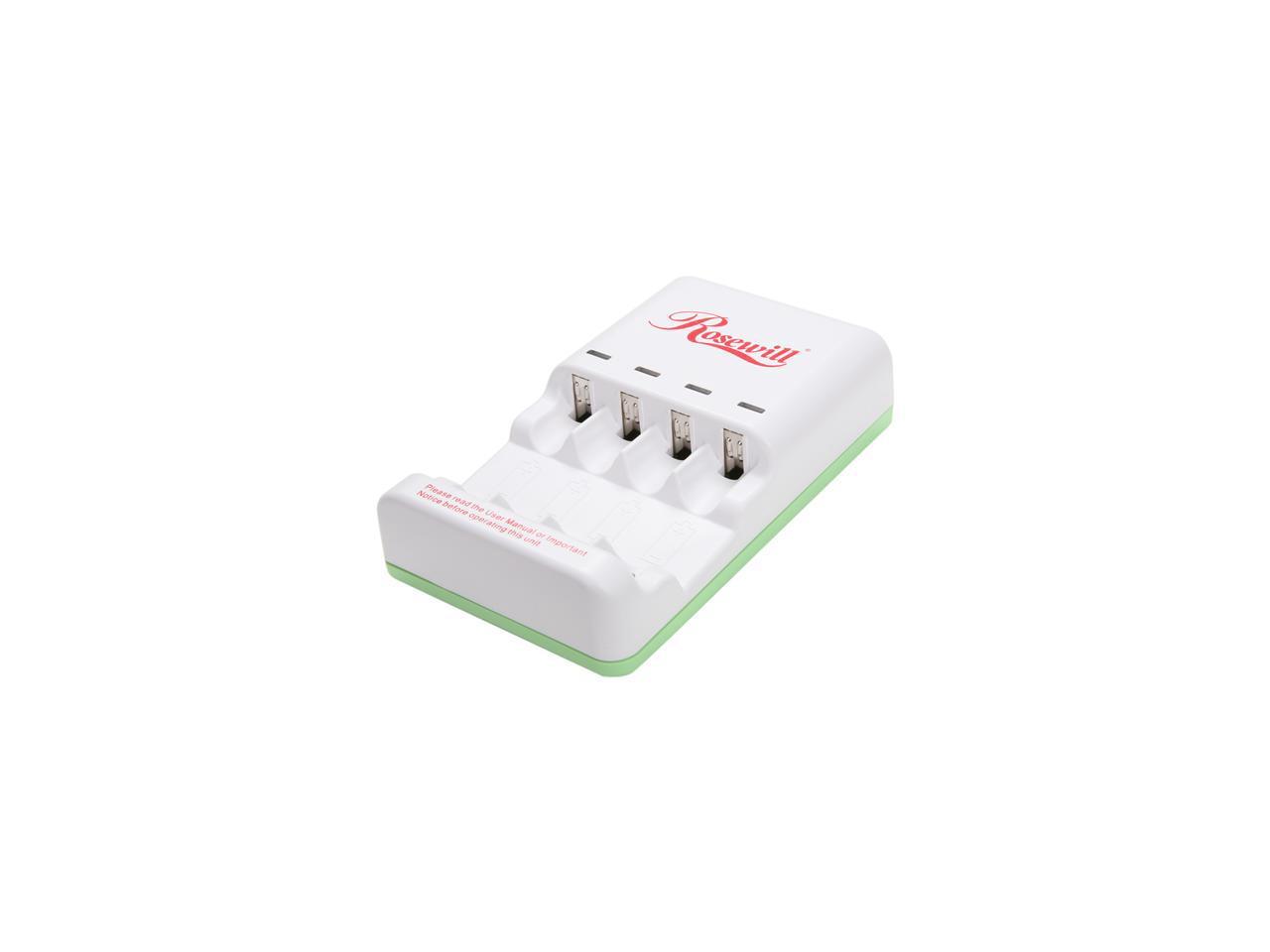 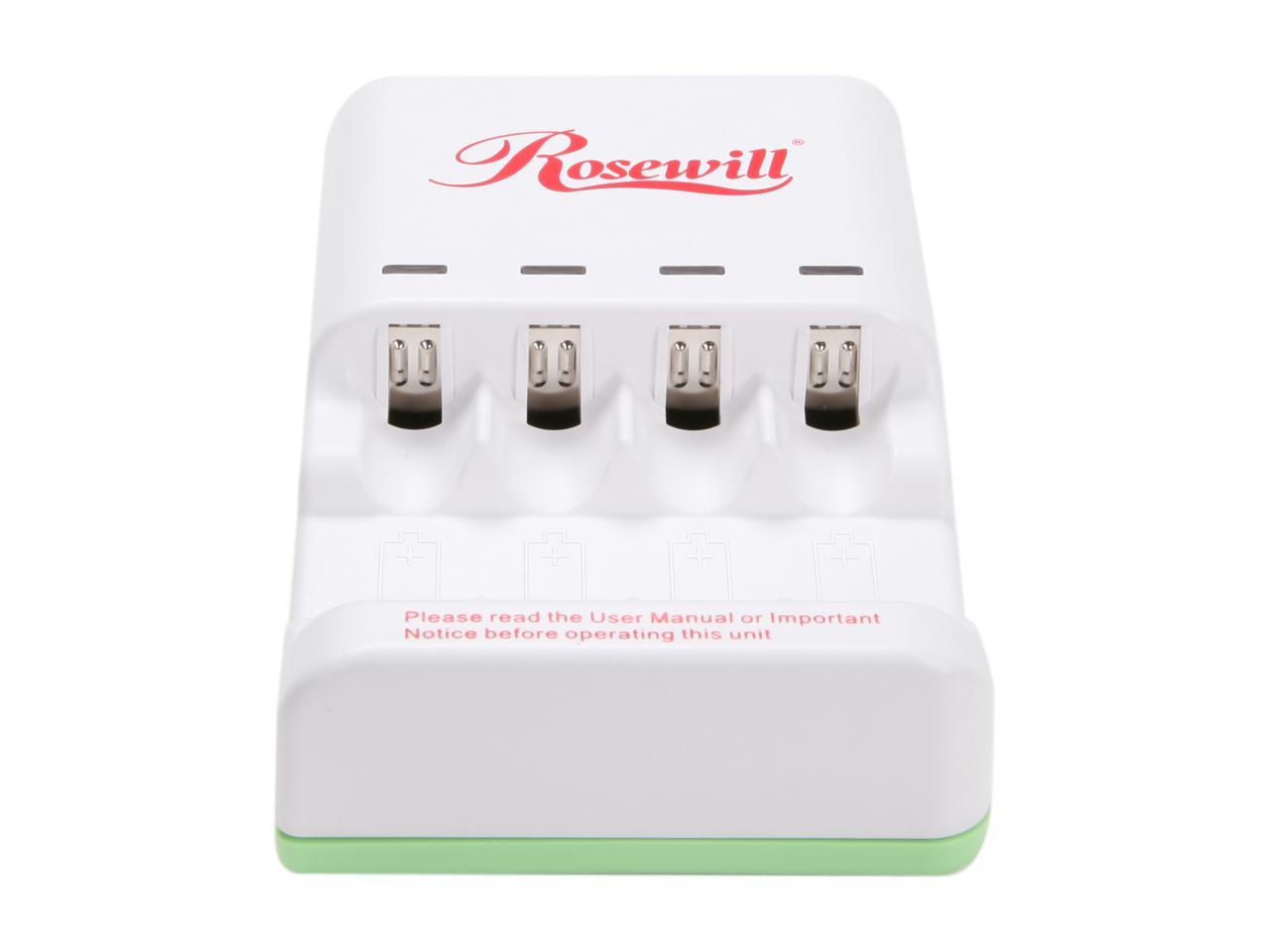 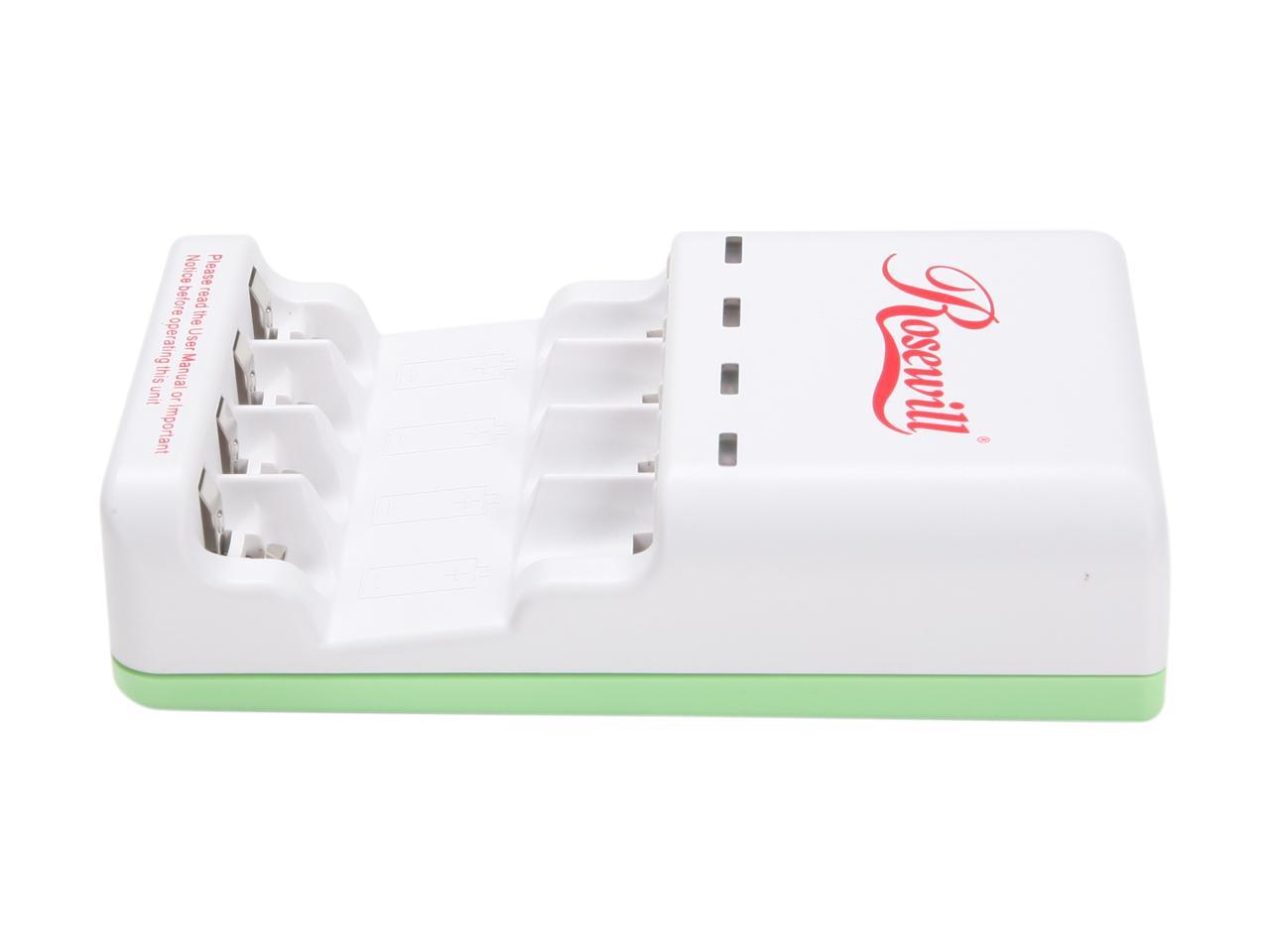 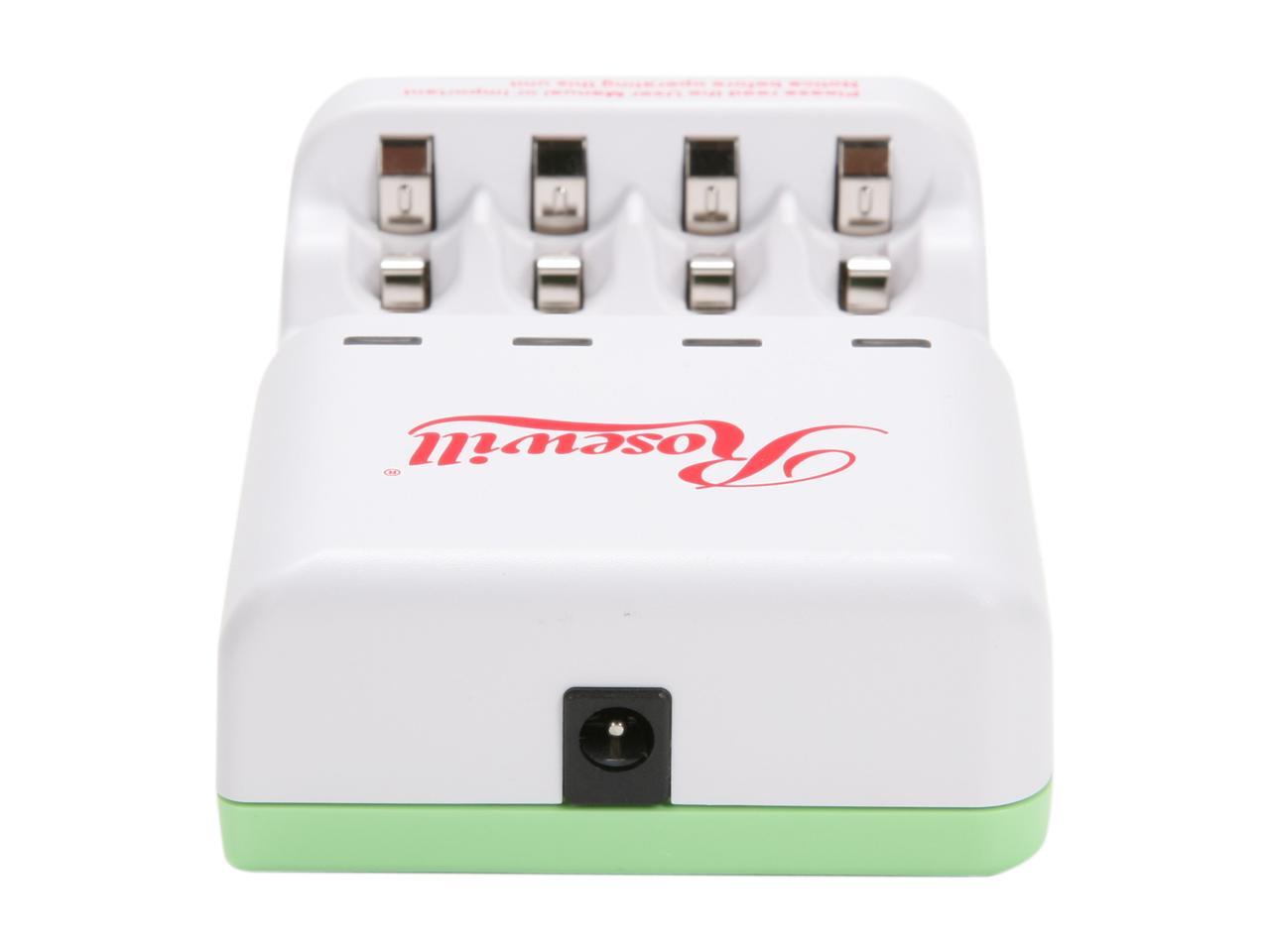 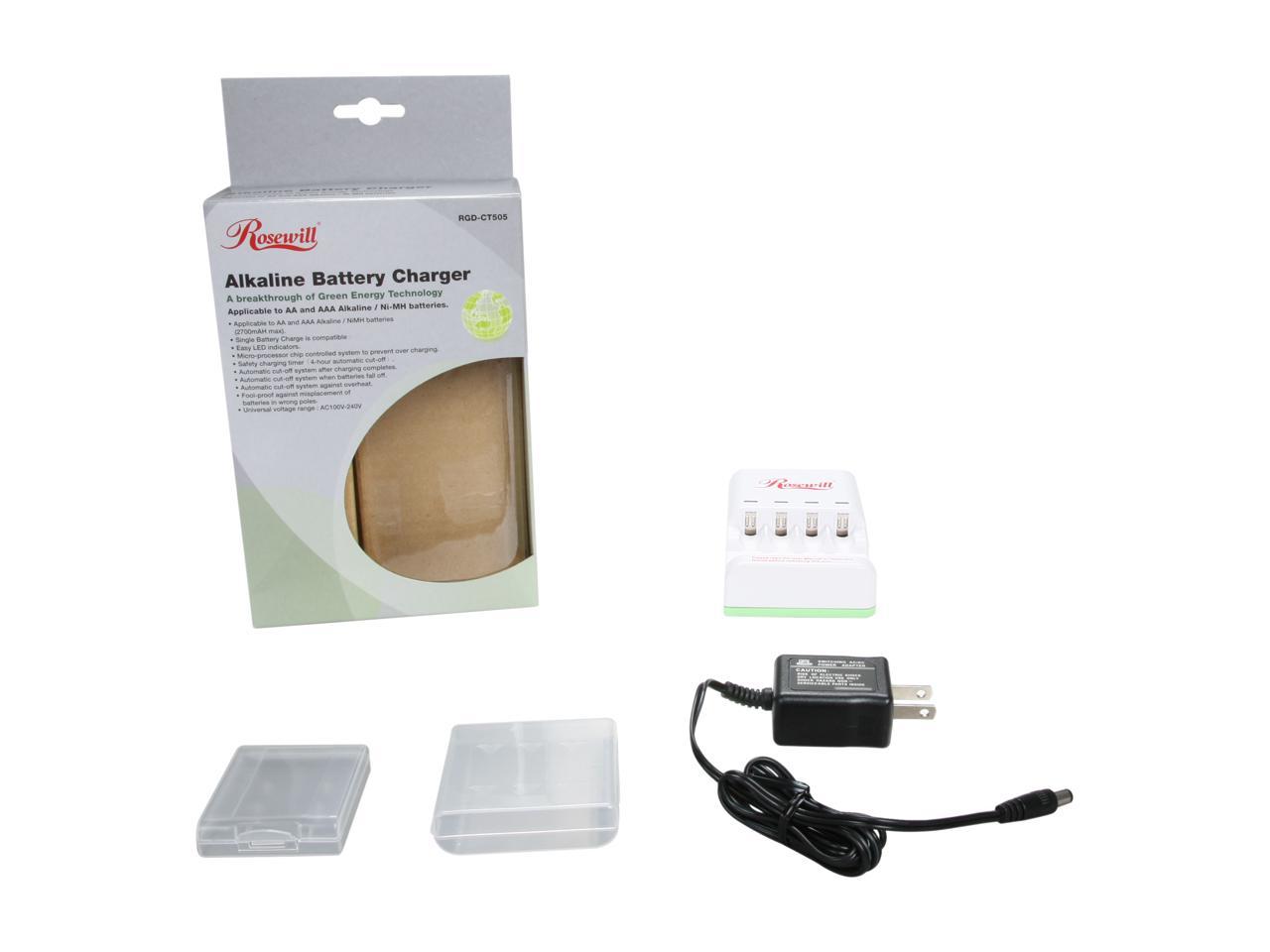 (103) Write a Review
OUT OF STOCK.
Fees for brokerage and duty included in price.
Overview
Specs
Reviews
The Rosewill RGD-CT505 charger is based on a proprietary and technology that enables ordinary disposable alkaline batteries to be recharged. It is applicable to AA and AAA Ni-MH batteries (2700mAH max rated capacity of each battery that can be charged), so that they can be used several times until they are fully depleted. The recharge and discharge cycles that can be performed compensate the initial cost of the charger and help to protect the environment.

Learn more about the Rosewill RGD-CT505

Pros: works with AA & AAA, Works with Alkaline & NiMH. If this keeps the batteries charged and the unit lasts for at least 2 months, it's paid for itself and then some!

Cons: Doesn't have a spot for 9v Alkalines. Sometimes the unit gets "confused" when inserting batteries - best to insert the batteries... then plug it in. That way you know which batteries are really dead. Saved 3 batteries with this method. (only had 2 dead ones out of all I've charged so far.)

Overall Review: I bought this to help with the ever sinking $$ hole that AA's cause in my home - extending a batteries life just 2-fold will make me happy - so far I've rescued 42AA and 12AAA batteries and asked my family to stop throwing those specific batteries away. (all of our computers have AA powered wireless keyboards & mice.) Awesome product so far.

Pros: Recovers piles of depleted Energizer and Duracell batteries I had collecting in the garage to be recycled. Saved me a bunch of cash to replace them, and now I have a store of fully charged batteries, ready to swap into anything I have that goes dead.

Cons: Wish it did 9-volts too - but I knew that when I bought it!

Pros: This has charged every alkaline or Ni-MH I have thrown at it and it has done better than advertised! I got 6-7 charges out of several sets of alkalines and at least 5 out of most others.

Cons: None! If I'd known how great this product was, I'd have gotten 10 of them for family and friends when I bought it on sale!!!

Overall Review: People need to use their brains when they by a product that has warnings about possible leakages in batteries. I insert the alkaline batteries I want to charge into the charger, then I turn it over, propped up over a folded paper towel in case of possible leakage during charging. I have yet to have any leakage in almost a year of heavy usage. Heavy Duty batteries ARE NOT alkalines and should not be charged in this charger. The fact that some reviewers mention it not working on Heavy Duty batteries, just shows how little people actually pay attention to what they are doing. ROSEWILL ROCKS!!! I have loved every one of the products I have gotten from them!

Pros: Charges alkaline batteries well. Seems to work better if you recharge them when they first start to get low. Not good if you let them completely discharge. Starts with red lights and ends with green when recharged. Good fresh alkaline batteries will recharge several times. Older ones more likely to leak. Good luck with Rayovac and Generic Rayovac.I recharge automatic night light thatuses one LED and have used same batteries for several months with several recharges. Should be good for toys etc. that get frequent use. Real money saver.

Cons: I have seen some leakage and it was from Duracell but it was an older AA battery.

Overall Review: Best used on newer batteries. My best luck with Rayovac. Only leak was from Duracell.

Cons: Would be nice if plug was built in and didn't require a separate chord (very minor item). It has one "flaw" that, if it weren't for the separate circuits for charging, I wouldn't even use it. The charger requires the batteries to already contain some charge in them, or it will not recognize them. While that doesn't sound too bad, it can be quite irritating as most batteries I have tried in it do not charge unless I "prime" them with another charger first. If I take the batteries out of my device immediately after it dies and put them in this charger, more times than not it doesn't recognize them. I then have to put them in another charger for a while then transfer them to this charger. To be able to use this charger only, I would basically have to guess when the batteries are nearing death (not everything comes with a charge indicator) and charge them before they die.

Overall Review: Basically I use two chargers to be able to use this one effectively. I get the same results with Eneloop and a couple of other brands of both new and old NiMH batteries. I have not used the alkaline charging feature enough to provide educated feedback.

Pros: I was very skeptical sbout this device like as I bet many of you are. I was willing to take a shot with this thing anyways because I'm spending my life away on batteries for kids toys! This device does exactly what it claims and it does it well, the recharged batteries last almost as long as when new.

Cons: None really. It doesn't do C & D cells? Not really a big deal since they are far less frequently used in modern devices.

Overall Review: If you're doubting that alkaline batteries can be recharged like I was and are looking for reviews from converted skeptics then here is one more to add. Just get it.

Cons: sometimes have to reinsert them, as they dont charge all the way sometimes.

Manufacturer Response:
Dear Customer, We apologize for the inconvenience, and will be more than happy to handle this for you. There are several things need to be aware while charging alkaline batteries 1. Low quality alkaline batteries or batteries come with the appliances. 2. The name brand batteries but dead for a while. 3. The name brand batteries that was stocked for long time. If the date code on the batteries was 2 years ago. The chemical activity might change and causing the leak. Please follow the user menu. Customer satisfaction is the first priority to us. If you like to return this item, we will offer replacement or full refund at our cost. Please contact rma@rosewill.com. We look forward to hear from you. Best Regards, Rosewill