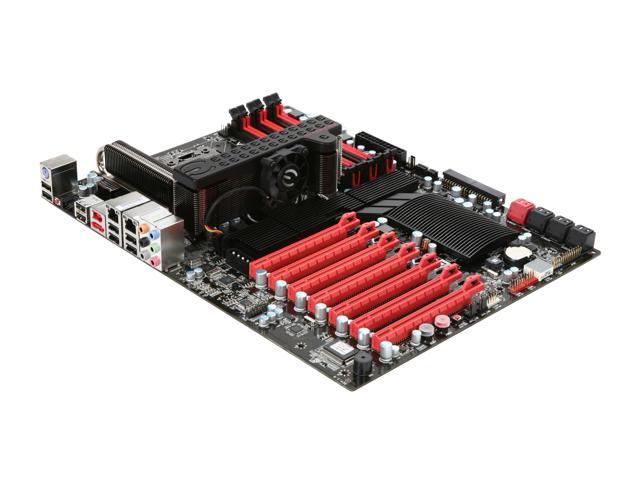 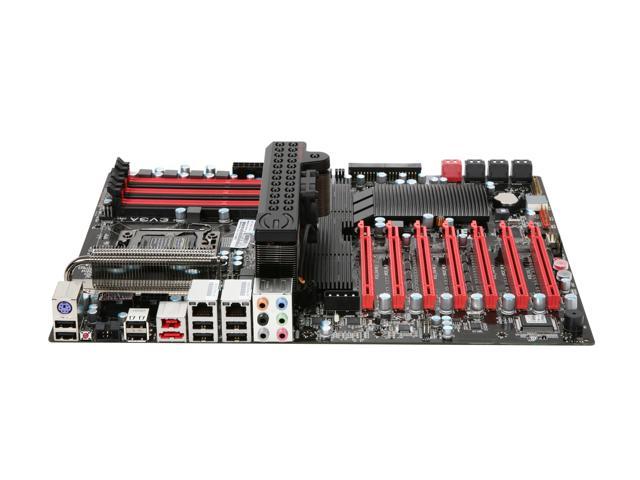 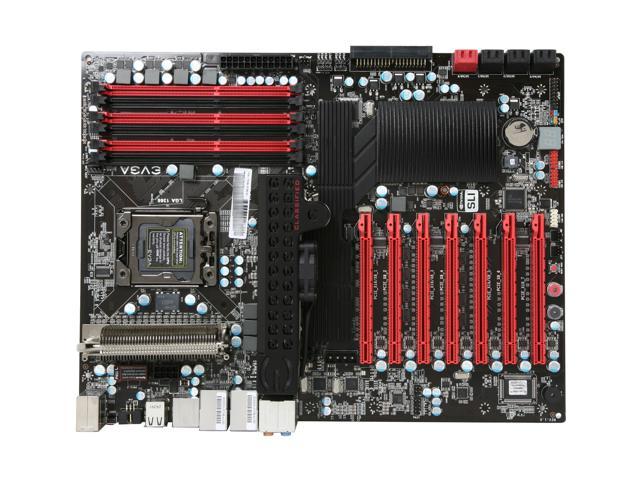 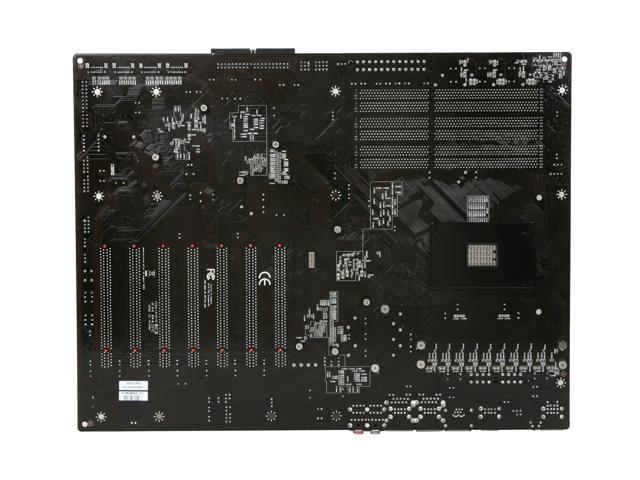 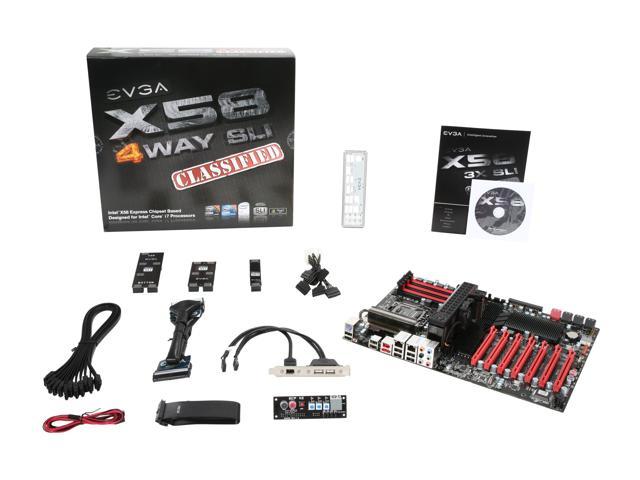 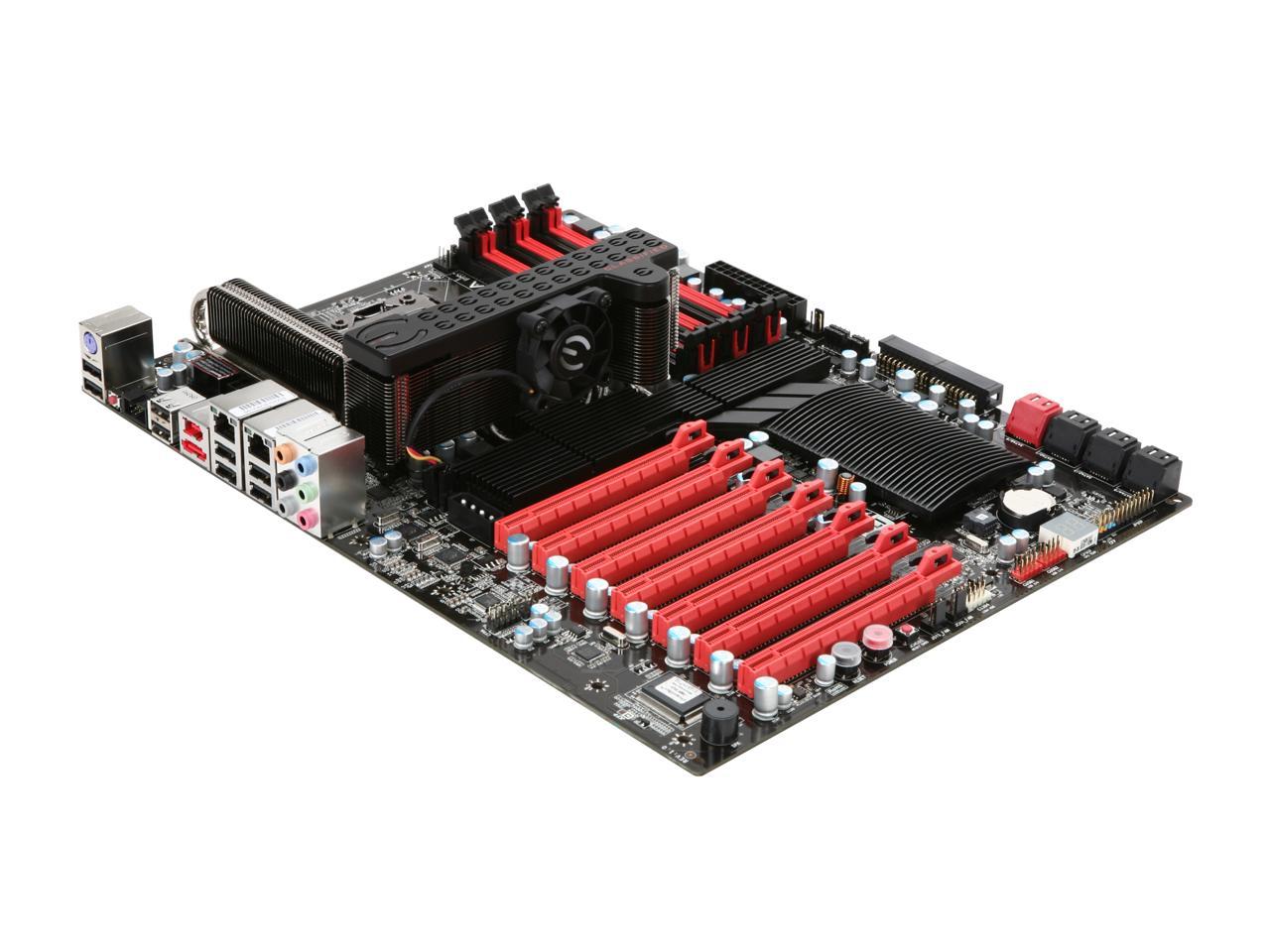 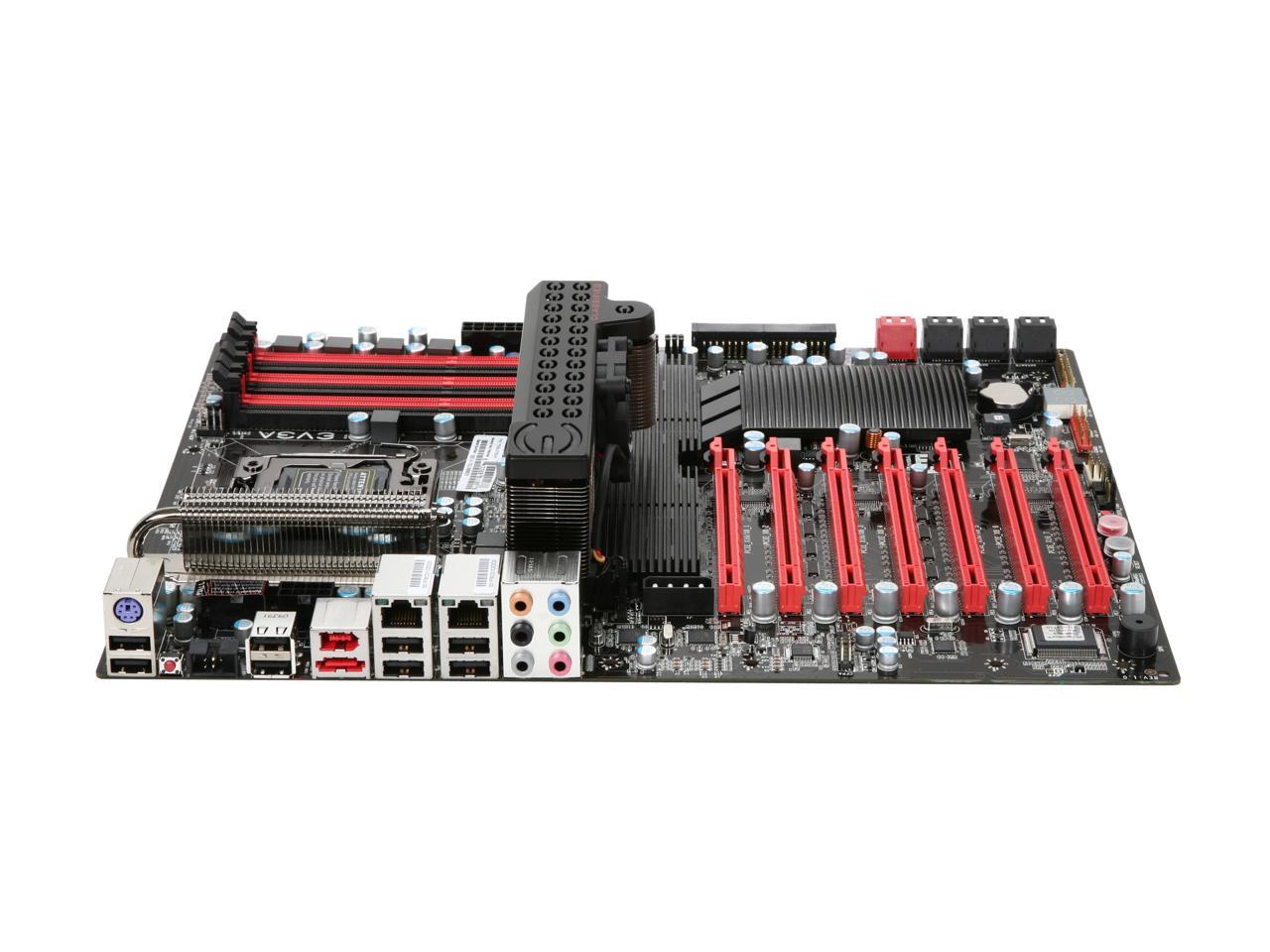 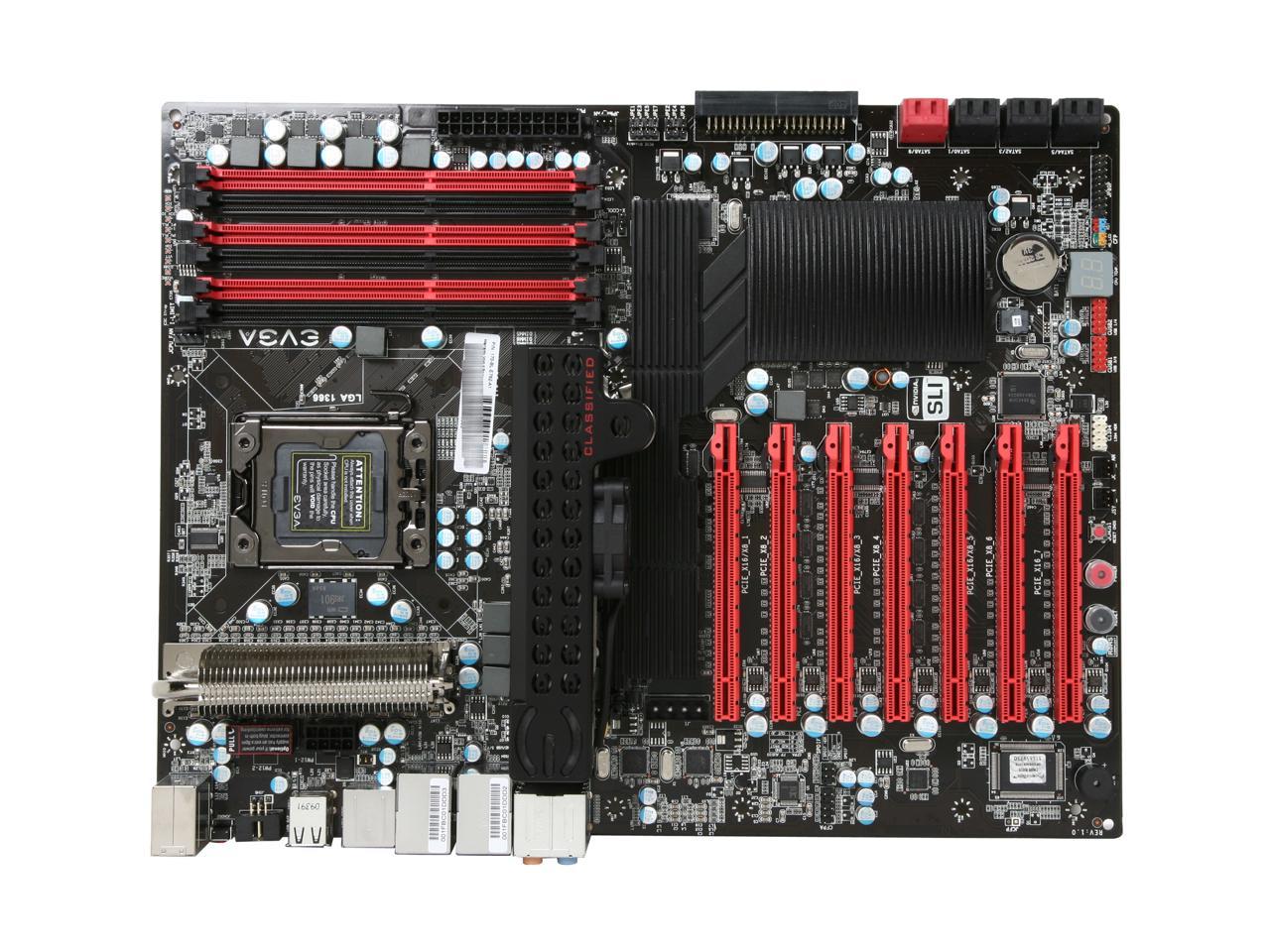 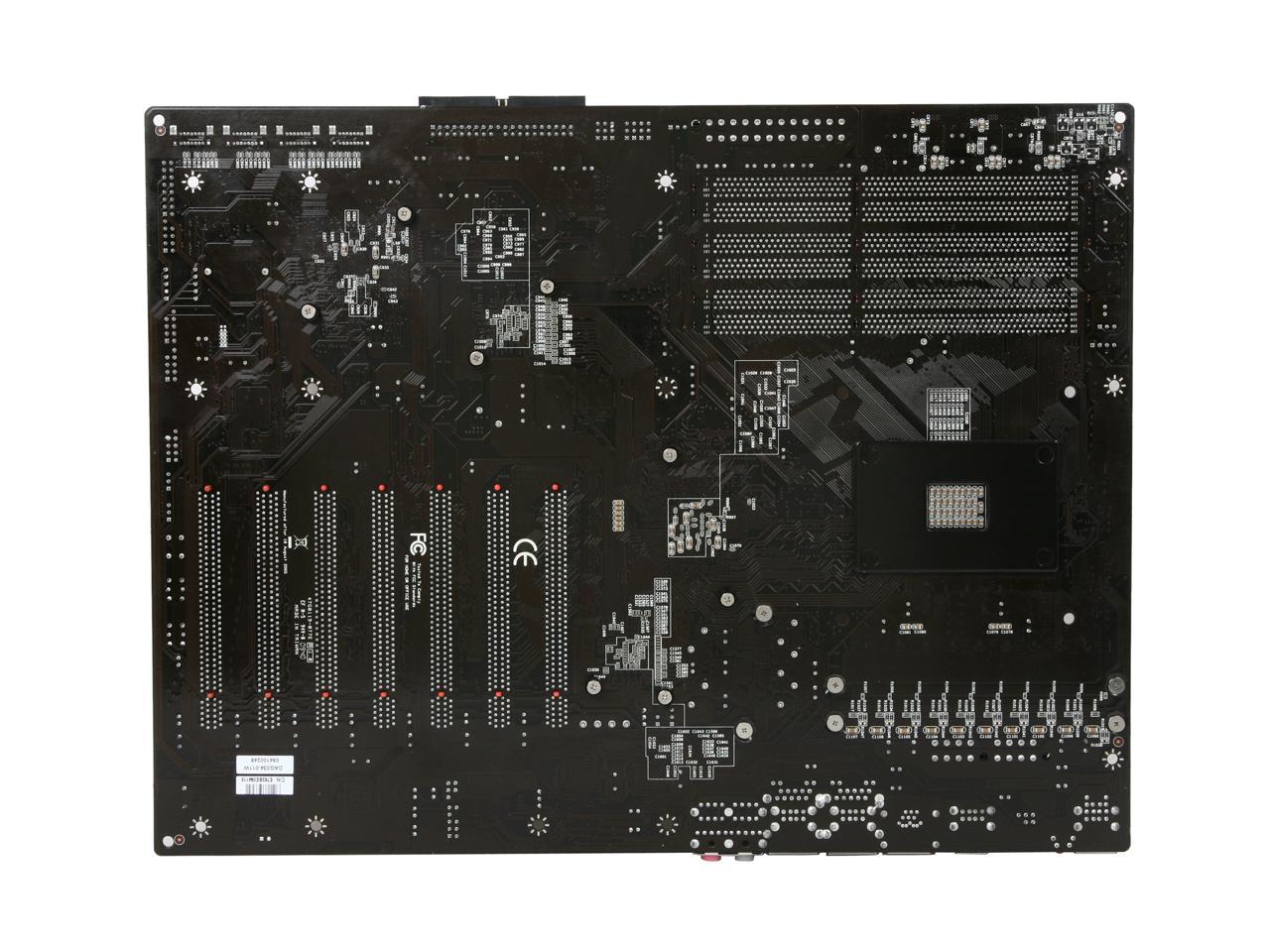 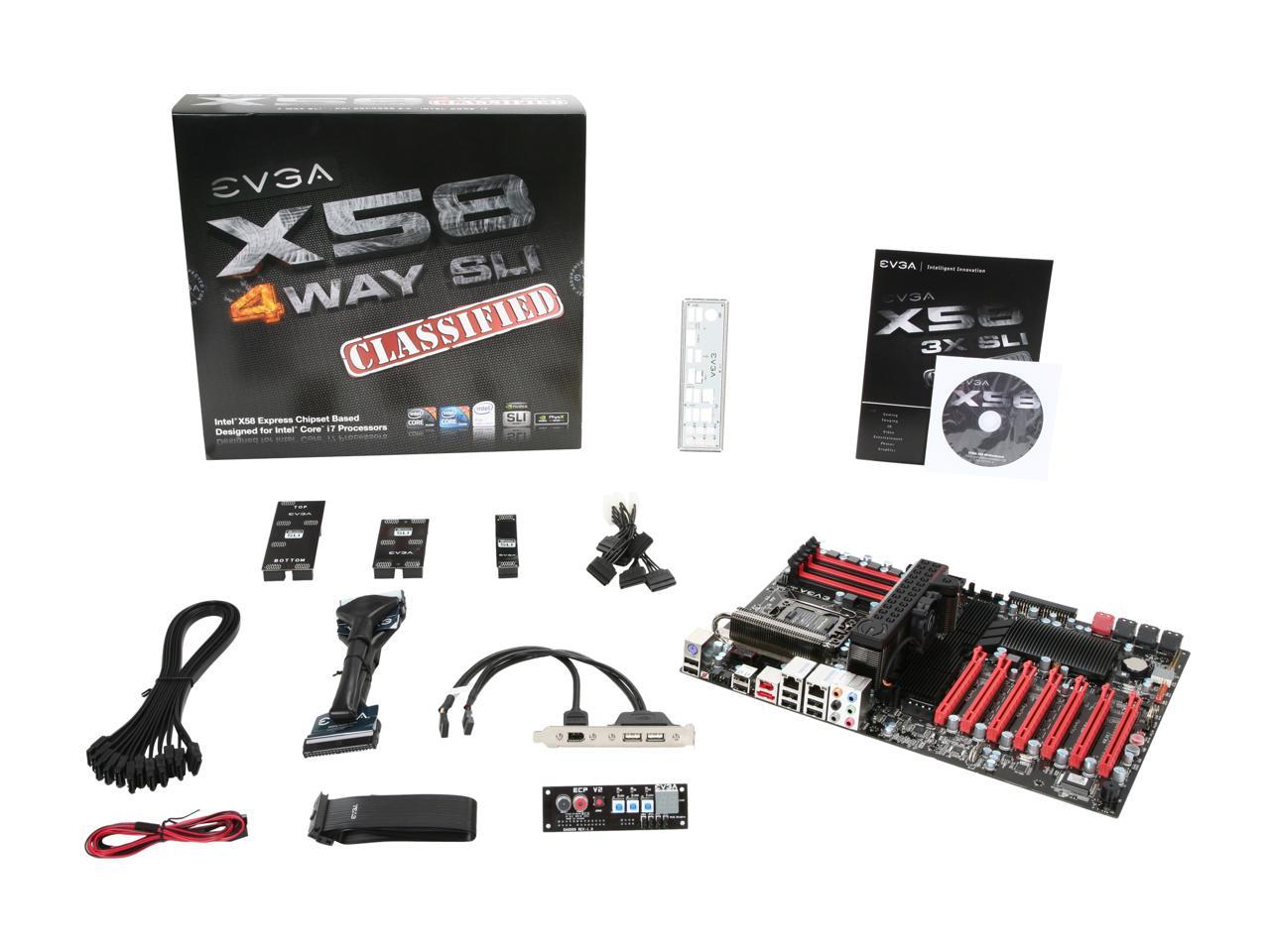 (53) Write a Review
OUT OF STOCK.
Fees for brokerage and duty included in price.
Overview
Specs
Reviews
You've used EVGA's video cards for running down your in-game enemies; now add their motherboard to your arsenal. The board is based on the Intel X58 platform and supports the Intel Core i7 processor. You can install up to 24GB of triple channel DDR3 1600 memory to run the front side bus at full speed.
EVGA X58 4-Way SLI Classified is in a league of its own. Featuring an incredible seven PCI Express Graphics Expansion slots, the powerful motherboard enables support for the World’s First 4-Way SLI Graphics card, the EVGA GTX 285 Classified.
An enthusiast layout allows for multiple configurations, including 2-Way SLI + PhysX, 3-Way SLI +PhysX or 4-Way SLI, and the incredible 10 Phase Digital PWM allows for switching frequencies of up to 1333KHz. It is no surprise that this motherboard is capable of breaking no less than four 3DMark Vantage World Records!

Pros: Has everything you could as for except USB3 and SATA 6Gb. I have a SATA 6gb eSATA card so NBD.

Cons: BE SURE YOU READ THE LIST OF COMPATIBLE CASES ON THE WEBSITE. THIS WILL NOT FIT IN MOST CASES. I purchased a Corsair 800 cases thinking it was plenty big enough. Turns out they put a plate at the bottom of the last set of screws on a normal motherboard. Not a problem for a well tuned hand and a dremmel. Also after everything else being so well laid out on the MB i hate to complain but could they have put the HD Audio and SPDIF ports in a worse place???

Pros: It's so big I had to buy a case I probably would've never considered, but that I now love dearly. Lian Li PG-P80, you complete me. POSTed fine first try and every time since.

Cons: Price, of course, and the Northbridge gets pretty hot. Also, my case's HD audio connector didn't look like it would fit, so I put it all together without connecting it. I figured, heck, I'll plug it in later. Now they're stuck behind three video cards. More of a criticism of my planning than the board itself, but there you go. The user manual and all the docs on EVGA's site are for the 3x SLI version. That's very very annoying when you're trying to put the thing together and wondering if you can trust your docs. You can, it turns out, but it would be nice if they'd toss a card or a leaflet into the box telling you that they gave you the wrong manual on purpose. I mean, almost $500 for a motherboard and they can't print new manuals?

Overall Review: It's an impressive board.

Pros: Solid board, Amazing! Still trying to get my hand on more 580 GTX's to complete my SLi on this sucker. PCI-E slots are extreamly useful since anything lower then the motherboards x16 can be fitted onto the board.

Cons: Came with an bent heat-sink but I was able to bend it back lucky everything still works fine without damaging anything next to it nor bent the entire heat-sink off all together. The packaging could have been better because the heat-sink was bent due to the way of the packaging not because it was previously opened if most of you are thinking that. The QA sticker means it passed QA at the time of the inspection. Hence why you have more then one QA sticker. Because of the way the box is packaged with the motherboard on the bottom of the box and all the extras on top with only a thin piece of cardboard protecting the motherboard wit a slight bump in the middle. The head-sink is off centered and the cardboard's bump is centered part of the board is pushing down the on mother board causing it to bend slightly just enough to relieve the pressure pressing down upon it. A single PSU isn't enough to support this monster if you plan on truly taking advantage of this mobo.

Overall Review: Don't buy this board if you don't plan on at lest SLi 3-4 way. Other wise just get an 3 way SLi mobo you would just be wasting you money on this power hungry monster. Also don't forget this is an XL ATX motherboard be sure to have an case that will fit this beast into. I made the mistake not checking the size of this mobo and was stuck waiting for a new case. The HAF X is one of the few cases this will enshrine this thing. No USB 3.0 Bummer... Had to get an PCI-E usb 3.0 card from EVGA but regardless not going to stop me from giving it 5 eggs though.

Pros: This board has everything. I don't even have to list all of its pros.

Cons: Major Major Major Con. I ordered this motherboard "brand new" from Newegg. Not once, not twice, but three times. Each and every time the motherboard came with all quality assurance seals ripped open and the motherboard was repackaged. After the third time I gave up talking to Newegg because it just doesn't even matter. They don't listen to what you have to say.

Overall Review: I really have lost alot of confidence in Newegg after this whole fiasco. I was "assured" on the third time that I would receive a brand new motherboard and this was simply untrue. I only docked 1 egg because it is really not the manufacturers fault, it is Newegg's.

Pros: everything is well made ,high quality and works like a champ,i got mine 2 months ago and is running 24/7 since ,never had any problems with.

Cons: does not have usb 3 and sata 3 but i knew that when i bought.

Overall Review: evga rebates really do work,sent my rebate forms and 4 weeks later got my rebate,for the first time in years i have received a rebate without any headache,thanks evga you guys are the best out there

Overall Review: avoid this board if you can, the design looks awesome but the way it is being shipped just cant ins't cutting it.

Manufacturer Response:
Hello, Please contact me at srobb@evga.com so that i can personally look into the issues you have experienced. Thank you Shannon
capital o.
Ownership: 1 week to 1 month
Verified Owner
8/28/2010 9:44:45 PM

Pros: EVGA rocks, they have got their act together, this is one bad --- mobo, bios easy, set up is easy, this mother is sweet,

Cons: none, does what it is supposed to do

Overall Review: add sata none, add sataIII, for the future and this is all the board u need, trust me u cant go wrong with , EVGA

Pros: Big board with more PCI-E slots than you can shake a stick at. Awesome upgrade and compatability. Almost everything you could ask for and cool box.

Cons: A bit dated, no 6gb sata and the such, but can be cured by a pci-e card if needed. Found what seemed to be a piece of dust wedged in between my processor socket pins, luckily enough it stuck out enough i could just grab it with my tweezers

Overall Review: Fast and clean shipping, and might as well get the CD/DVD drive combo since most of the time they offer it the discount makes the drive free anyways. I have to wait till my other parts arrive before I can rave about anything being defective. Packaging is top notch so far.