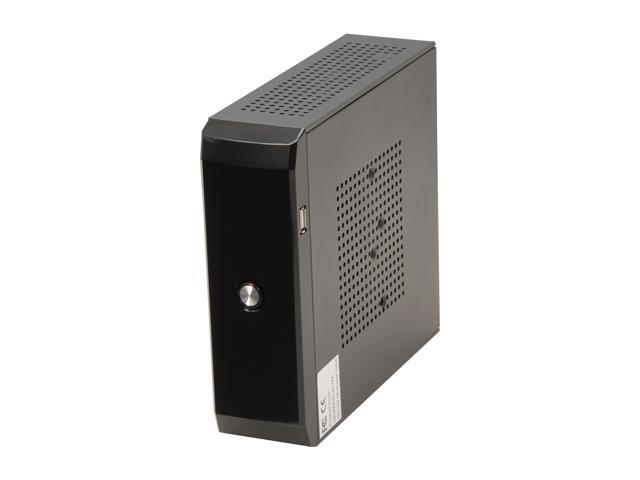 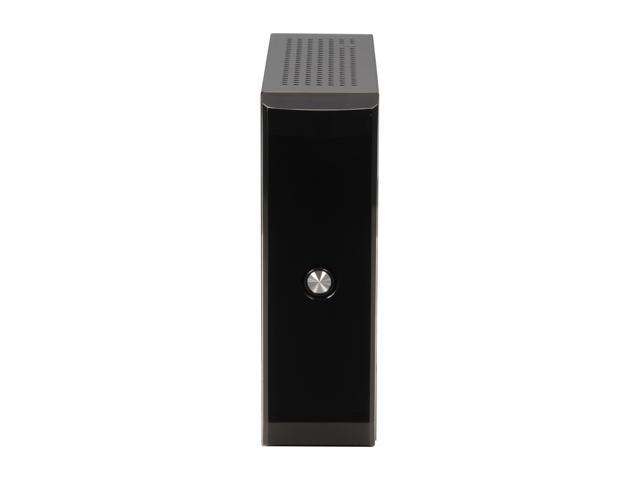 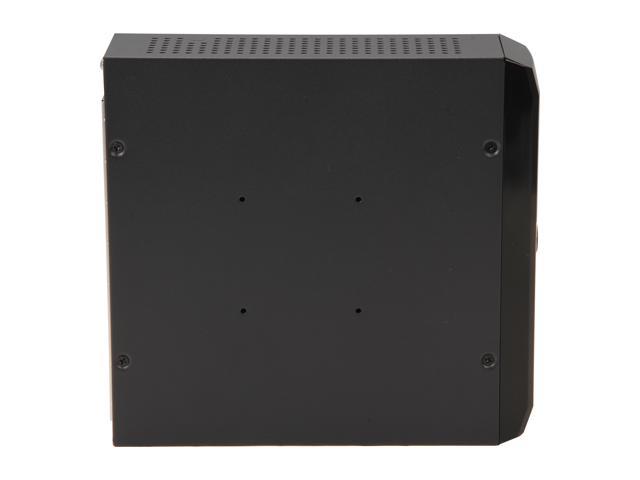 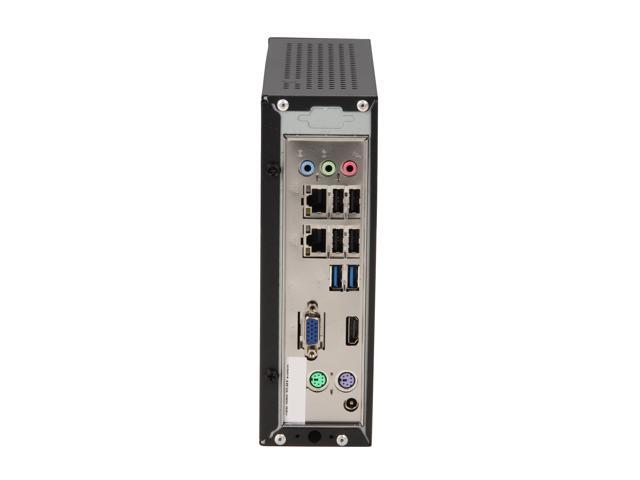 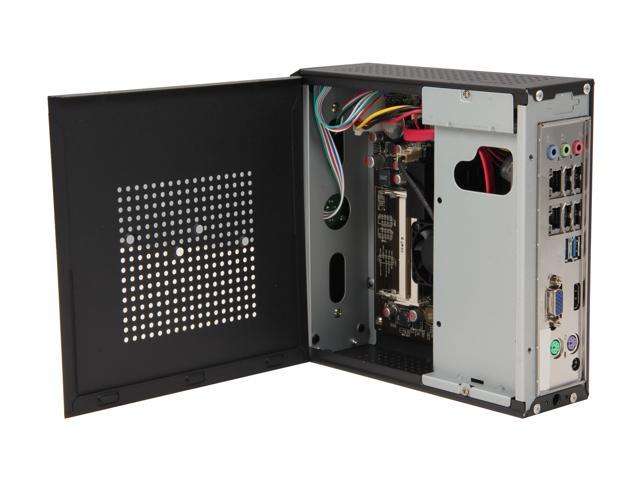 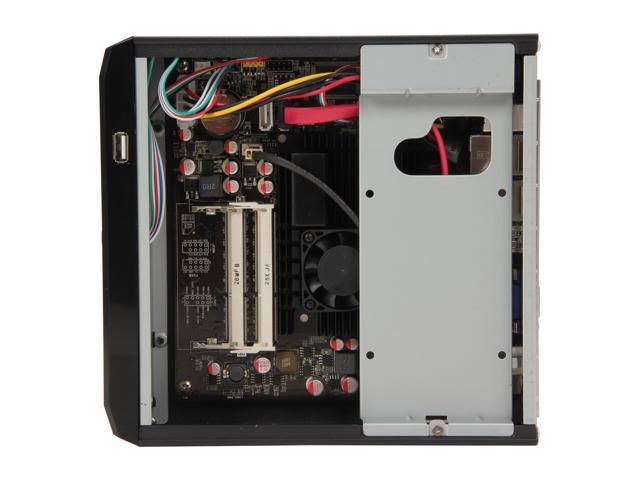 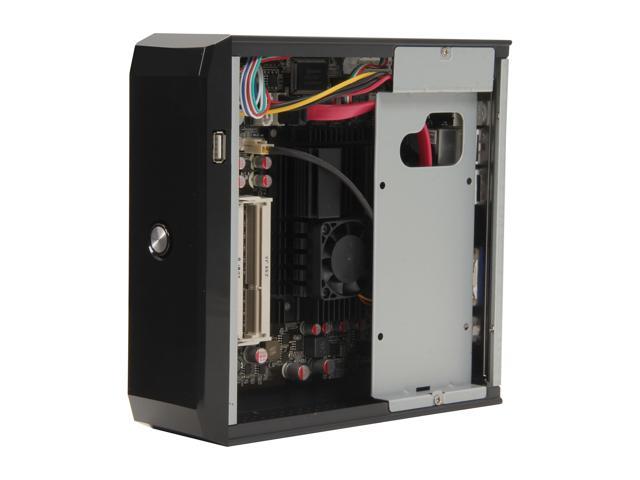 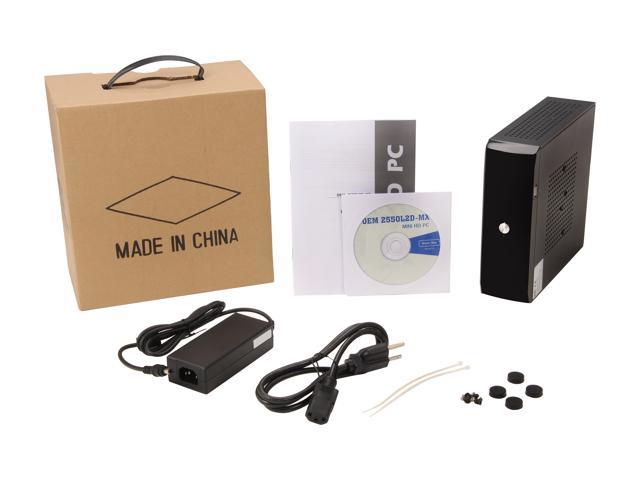 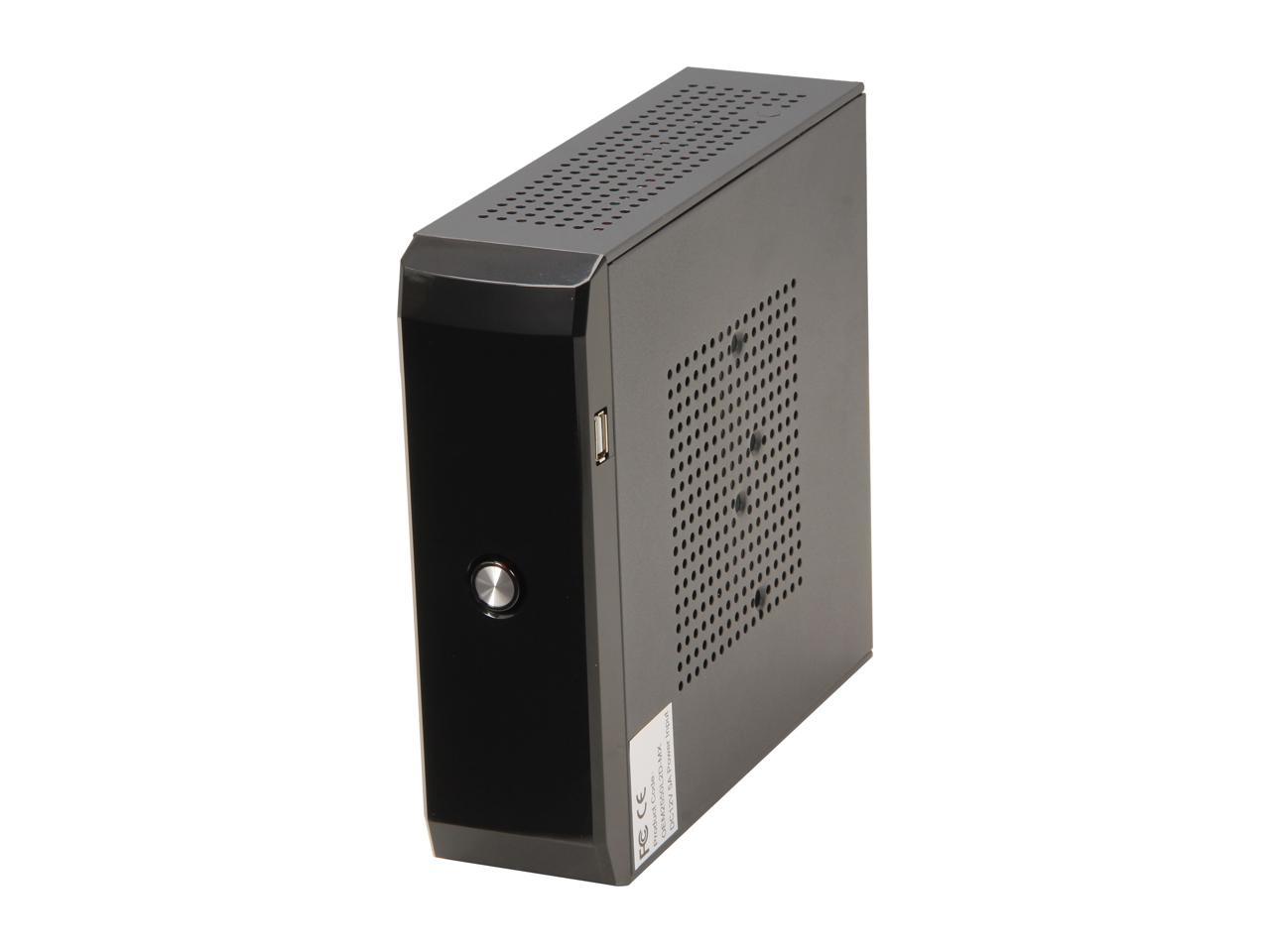 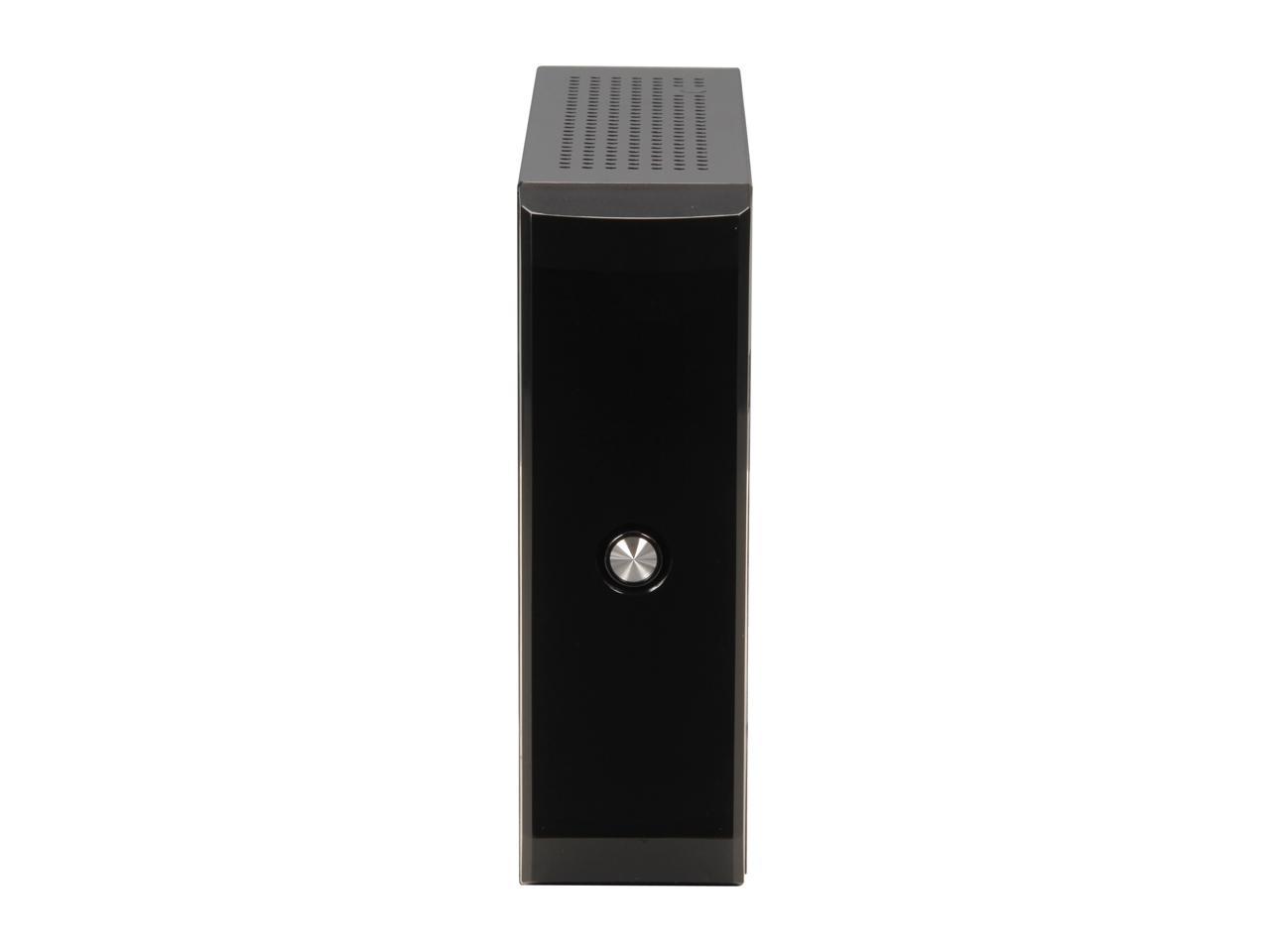 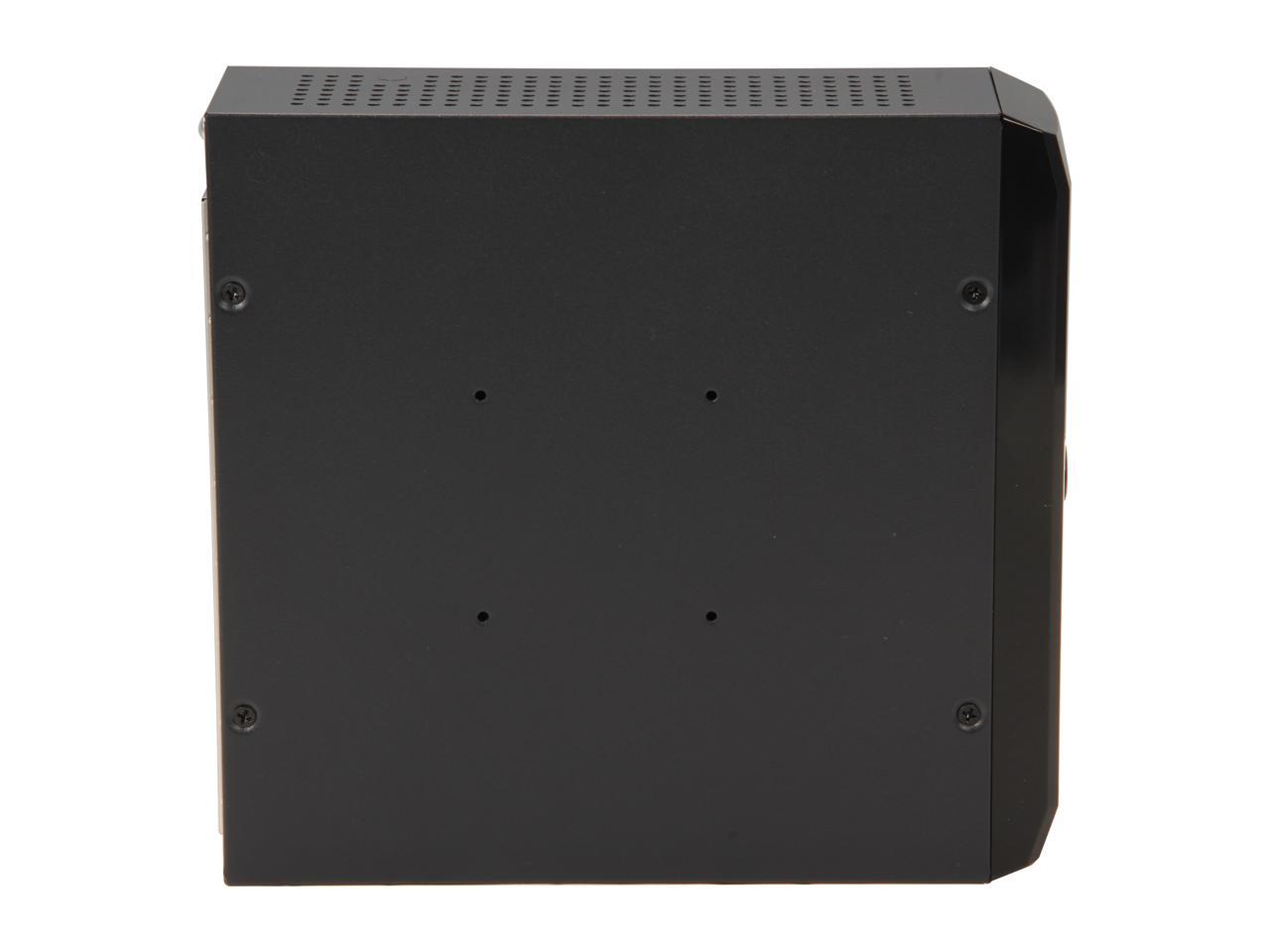 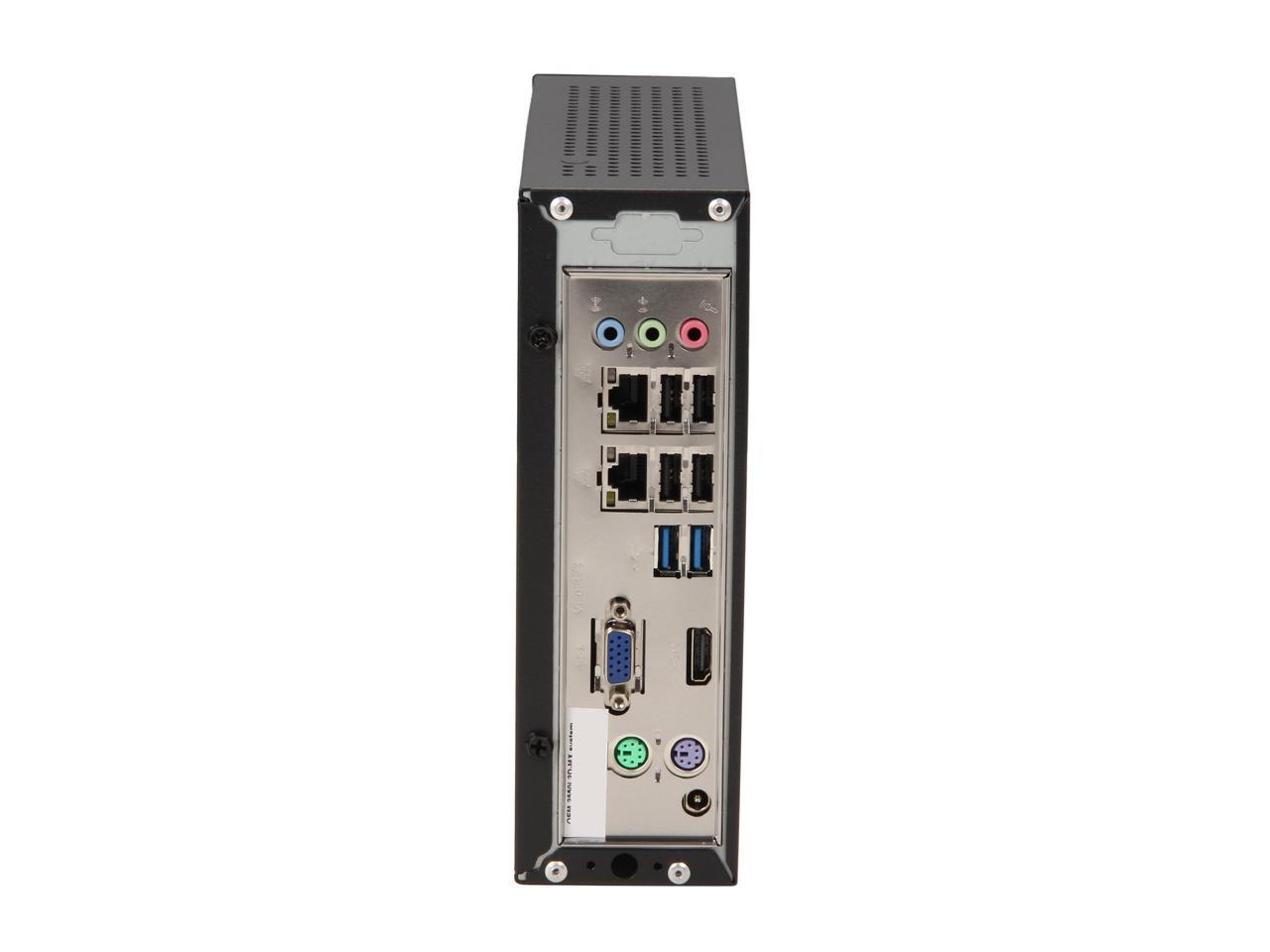 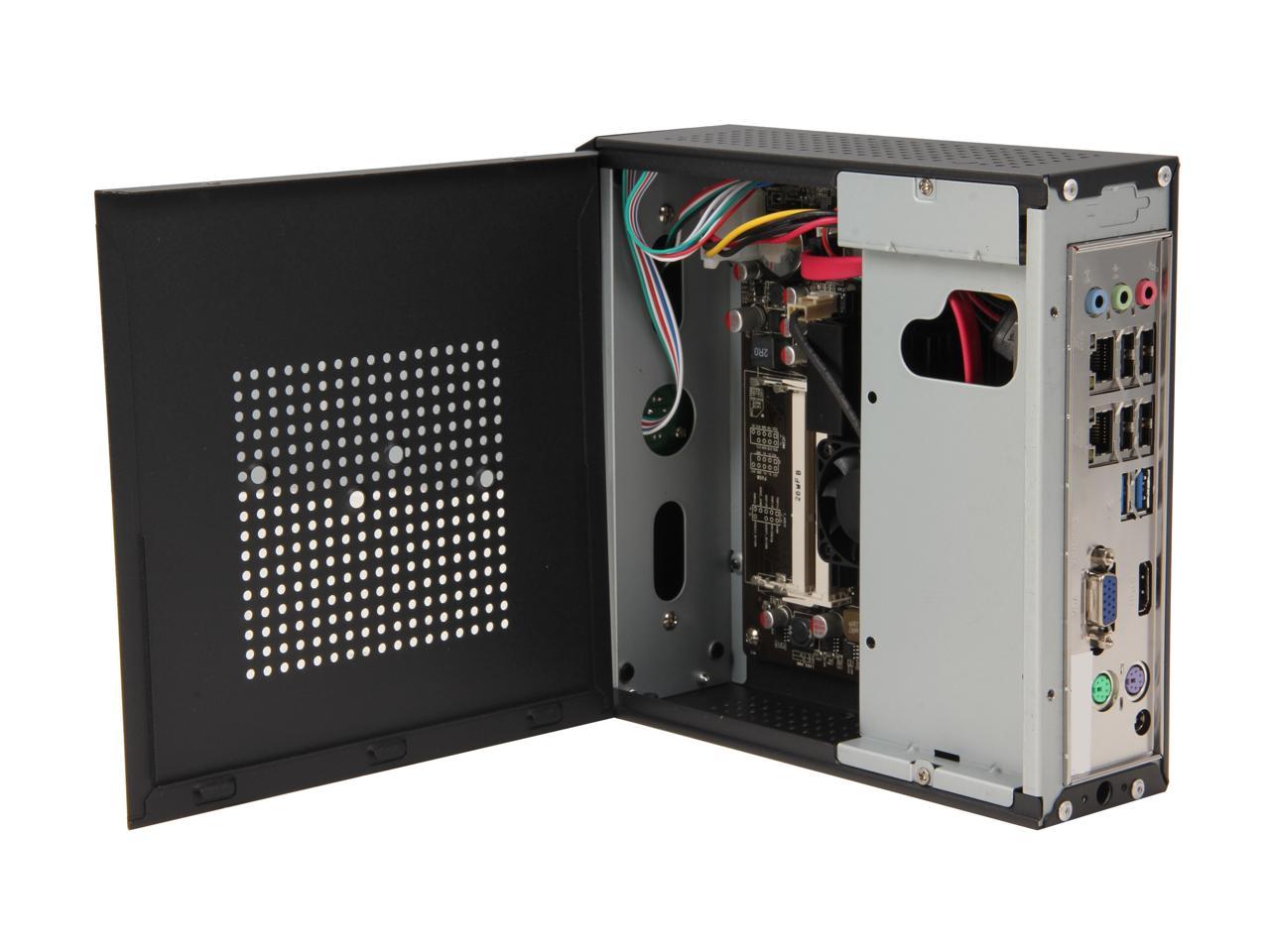 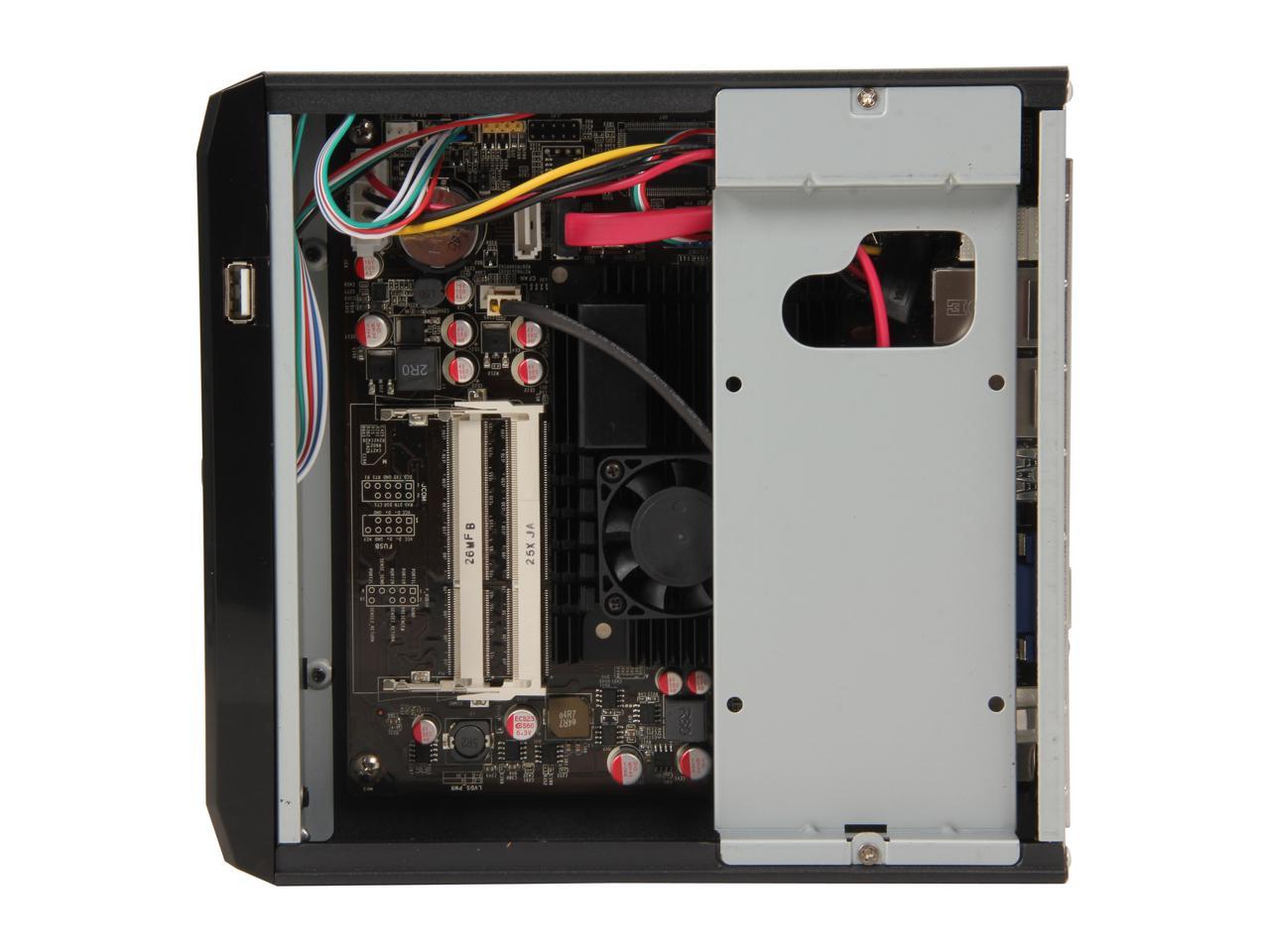 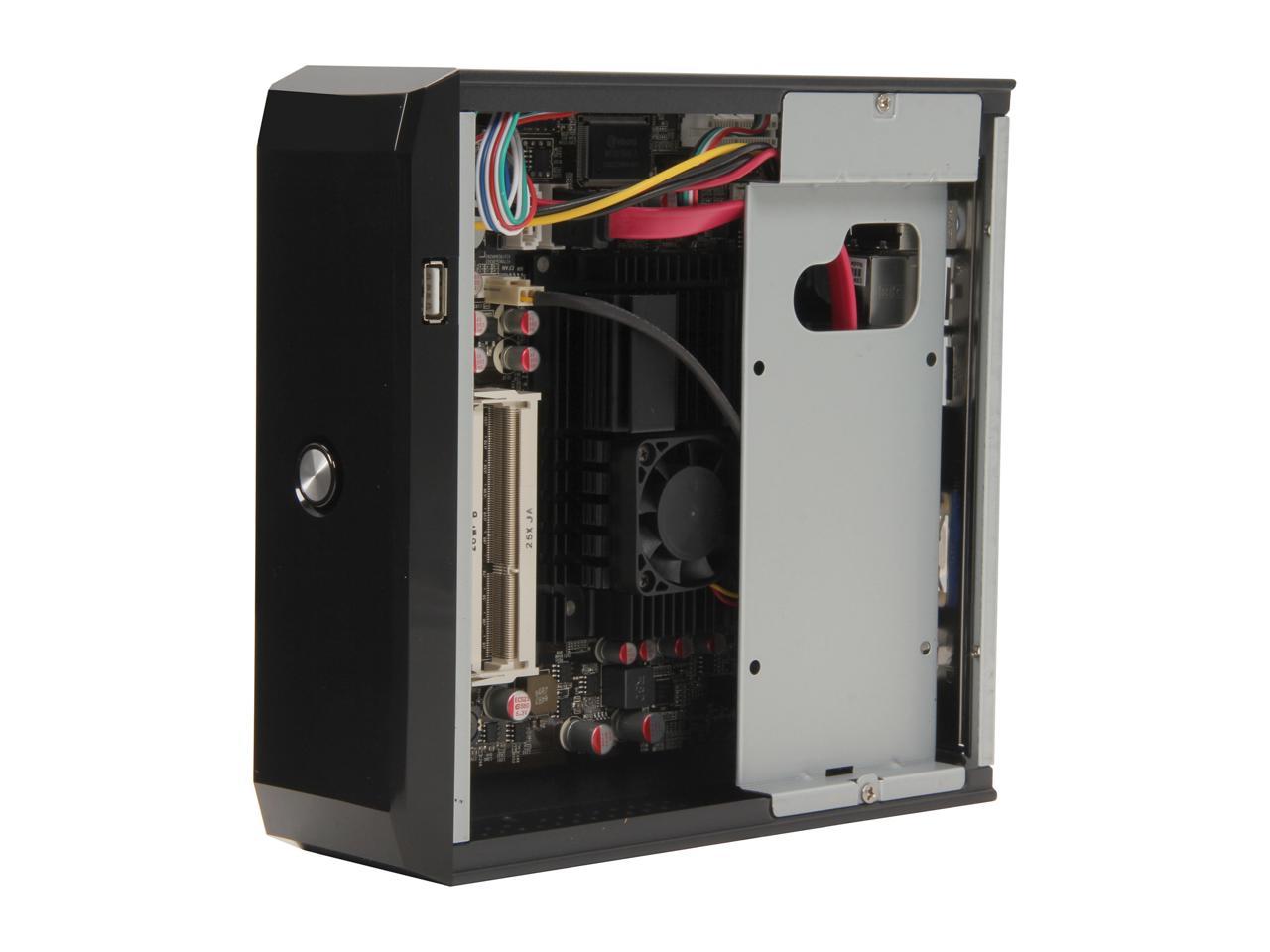 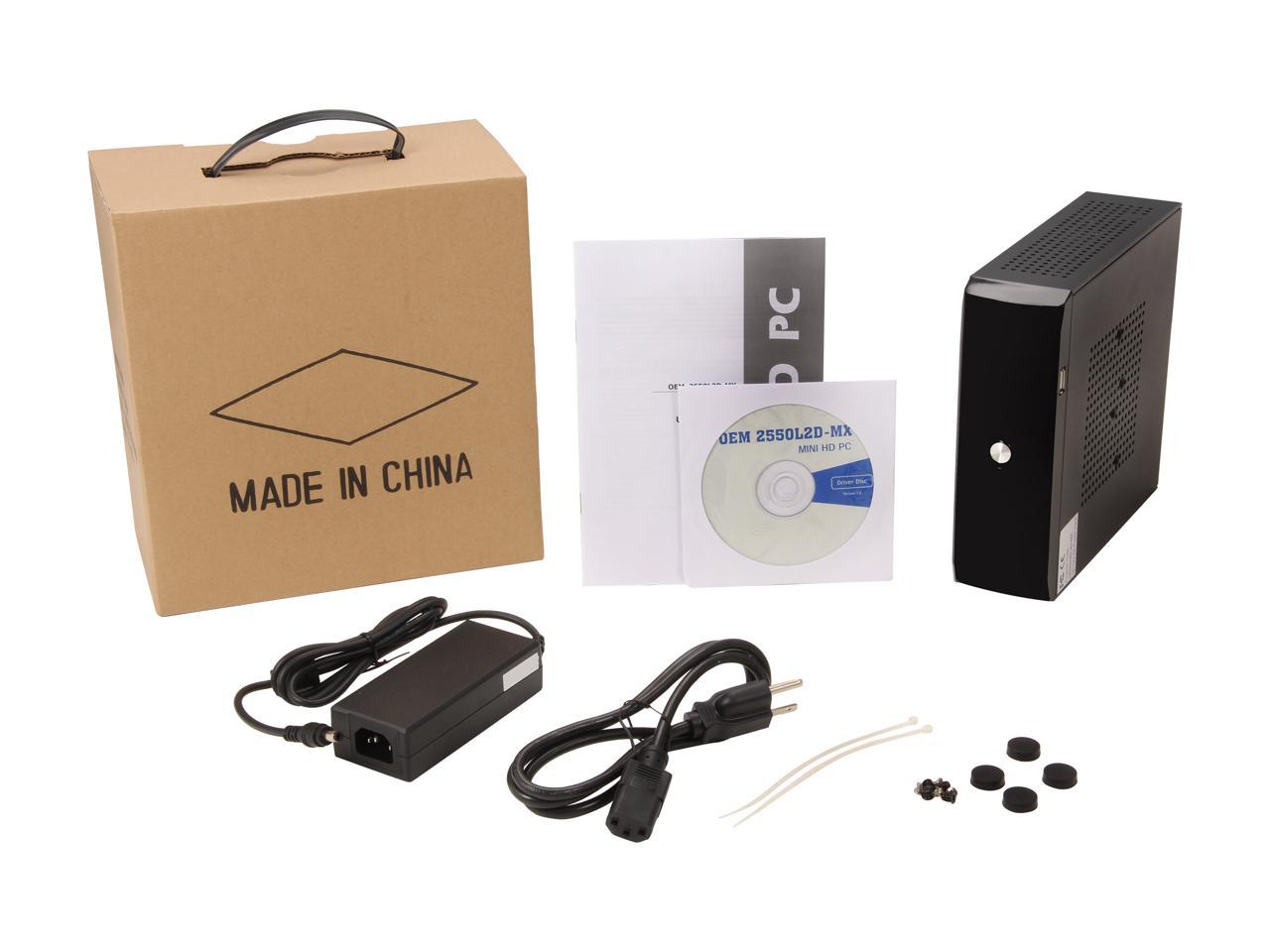 (131) Write a Review
OUT OF STOCK.
Fees for brokerage and duty included in price.
LOADING...
Specs
Reviews

Pros: Good little pfSense 2.x box. Has been running 24/7 for 6 months or more without issue. Has 6 or 7 networks VLAN'd across the 2 NICs, no issues. Runs a 35mbps IPsec tunnel to another site at about 15% CPU load with no problems. Works good for small site, 15 to 20 users, firewall rules, DHCP, small VMware lab, etc. Even tried ESXi with an SSD installed when I first got it... Not the fastest machine, but would run 2 or 3 VMs that dont require a lot of CPU without problems.

Cons: The FAN is terrible! I know others have complained also, and its justified. Most loud fans generate noise from moving air, this one seems to make noise from shotty bearings or something. BIOS = meh

Overall Review: Cant use the pci-e slot... not so bad considering the price and size of this machine. If really needed, you could swap to another mini itx case for $40ish. pfSense 2.0.x must run 32bit due to the lack of video drivers (if you want console via VGA) pfSense 2.1 is fine with 64bit

Cons: Taking away 1 egg (although I really shouldn't) for over-all flexibility just because the PCI-e x1 slot is almost useless unless you keep the lid on the case off because i don't even think a low-pro PCI-E x1 card would fit in there.

Overall Review: Having spec'd this as a cheap replacement for my homebrew firewall/router, I have zero need for the PCI-E x1 expansion, HDMI output (video performance), local disk throughput. It would have been a bit more useful to just have a mini-pci-e slot instead.

Cons: Not that many. It is what it is. Small form factor "appliance".

Overall Review: I'd buy with confidence. I'd get more of these little guys but they keep running out of stock. Have 10 so far with no issues, anticipate buying more.

Pros: Installed pfsense 2.1 with no issues via USB img file. Is running good so far. The interface is relatively fast, and internet download speed is up to 56 Mbps (my Lynksys e2500 was only getting 30) with my Comcast cable modem (Motorola sb6120). I have the LAN port going to an 8 port GB switch and the wireless router has been relegated to an access point on the switch.

Cons: BIOS. As other people have mentioned there is not much to it... I would at least like to have control of the boot order.

Overall Review: For the price this thing is perfect. I put in 4GB of RAM from a Dell laptop I upgraded and an old 60 GB Mushkin SSD that I upgraded on my desktop. I configured the gateway and firewall with relative ease. I want to configure it as my DNS server and VPN next. I didn't realize, but there are also antivirus packages to play with for pfsense... I may implement those as well.

Pros: Great form factor, solid platform for Linux desktops (Linux Mint, Peppermint both work fine.) Using a single 4GB SO-DIMM as recommended, Works completely fine as a desktop/study computer for Middle and High-School students. Not a gaming system, but that would be silly. Quiet but not silent. Good that it has dual NICs, even though I am using a Rosewill WiFi dongle that worked out of the box. Video output using stock Linux drivers works fine.

Cons: Would be silent with a passive CPU cooler as some other Atom mobos use. Or even with a slim 120mm mounted on the faceplate. No reset button. No front audio ports. Wall mountable, but no brackets included. No GPU expansion. SATA II (3Gbps) only.

Pros: Priced right and comes with dual 1gb NICs, HDMI, lots of internal USB headers, PCI-E 1x slot, and even a SATA cable the right length to hook up a hard drive. The build quality is 10/10 for the metal case and simple design. The computer, the BIOS, and the cardboard box that it comes in are all unbranded and are ready to accept your specific company branding. The cardboard box that it comes in also has a nice plastic handle that makes it look smart when carrying.

Cons: Although the CPU supports 64bit, and technically the motherboard does as well, the drivers are a significant issue. We couldn't even see enough to install a 64bit version of Linux due to some odd issue that caused output to get lost on the screen. Using 32bit versions get rid of most of the issues, however there were some smaller graphical issues we experienced which, although might have been fixed with compiling a different video driver into the kernel, wasn't enough for us to deal with. Frankly, we don't ever use the console once they are built, so no reason why that would ever bother us.

Overall Review: Don't know how you would ever actually use the PCI-E 1x slot, but perhaps some sort of small card? Would have been better to include a micro-pci-e slot so you could attach a laptop wireless card or SSD. Also, not sure what you would ever do with that many internal USB headers, but maybe someone will find a use for them. If you plan on deploying this in a hot environment (90+ Degrees F), plan on installing a second small fan on the case to push air from one side out the other. The case comes with several additional mounting points just for a scenario like this. If the drivers for this box were 64bit, this would have gotten the 5th egg. Either way, it's the right price for what you get. We purchased 4 of these and we plan to buy 10 more before the end of next year if they are still for sale.

Cons: loud CPU fan - I easily replaced it with a quiet 40mm fan video resolution - it took some fiddling with 'xrandr' in Linux to get it to display at my monitor's native 1600 x 1200 resolution flimsy backpanel - there is a ton of flex when connecting cables - the rest of the enclosure is rock-solid

Overall Review: Operating Systems Tested (all worked): Linux (Ubuntu & Trisquel), OpenBSD, FreeBSD Included items: - enclosure - motherboard - CPU + fan - cables Stuff you need to buy: - hdd (2.5" only) - memory Not tested: - HDMI output - dual monitor configuration - audio - USB3 ports Closing thoughts: This computer is not meant to replace your workstation. Instead, it is a valuable machine that can be used for OS testing, router, firewall, server, SpinRite, etc. * * * * * UPDATE (November 7, 2017) * * * * * This computer has been running without a hiccup for me. I have loaded it up with OpenBSD and it has been serving as my home router since August, 2013 ...over four years!!! Amazing!

3 out of 3 people found this review helpful. Did you?
Anonymous
Ownership: more than 1 year
Verified Owner
I've been using this for almost 2 years. Good enough to do the job. Works great with OpenBSD, FreeBSD, Linux as a firewall/router9/10/2016 1:52:15 PM

Pros: No driver compatibility issues with 64 bit OpenBSD, FreeBSD or Linux. That previous review claiming otherwise is very much wrong, unless they're referring to specific issues with the GMA3650 closed source Linux driver which I never tested. I haven't run into issues yet with the Broadcom gigabit ports. It's been performing quite well there, though I should point out that I use OpenBSD as my OS of choice here. I did test runs of FreeBSD and Linux when I first bought the device. If you're having driver issues in your Linux distribution of choice then either switch distros or compile the kernel drivers yourself, as there's no issues with them. No drive failures from overheating as of yet. When I stress-test the CPU the temperature never seems to go over 60C, and I have the noisy heatsink fan removed.

Cons: The CPU heatsink fan it comes with is quite loud. Feel free to find a replacement, but Atom CPUs with the included heatsink does the job fine, at least for a router device with additional services running. Using it for something more CPU intensive is probably where replacing the existing fan with a quieter one will come into play, like a Scythe 40mm one. The manual isn't good and I think I remember having to swap USB ports for the USB install media in order to get it booting, in addition to strugging to get into the BIOS settings initially. Though I didn't personally test this, the video on the Atom is GMA3650 which isn't actually Intel tech, but PowerVR which means there's a lack of decent open source drivers for it. Don't plan on using this and expect decent performance in a GUI environment.

Overall Review: If you're looking for a cheap homemade router or something that can provide a dumber of services that doesn't need a fast CPU, this will do fine. I've yet to see how long this will last, but I'm satisfied so far. Don't buy this if you want to use this as a complete desktop, as there are far better Atom booksize barebone setups you can get with an Atom CPU that has well-supported graphics through the open source Intel video drivers.