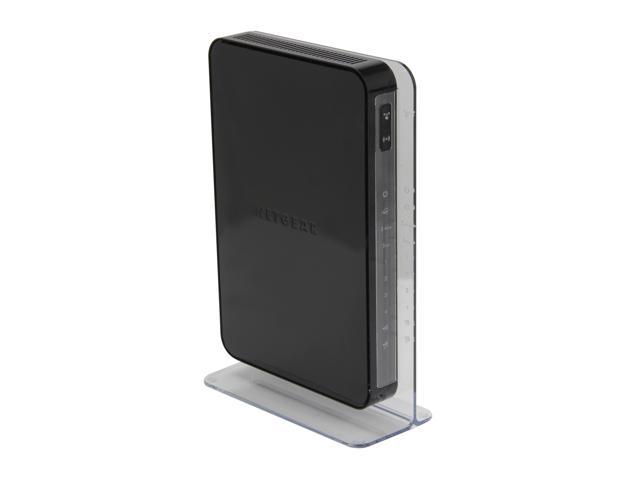 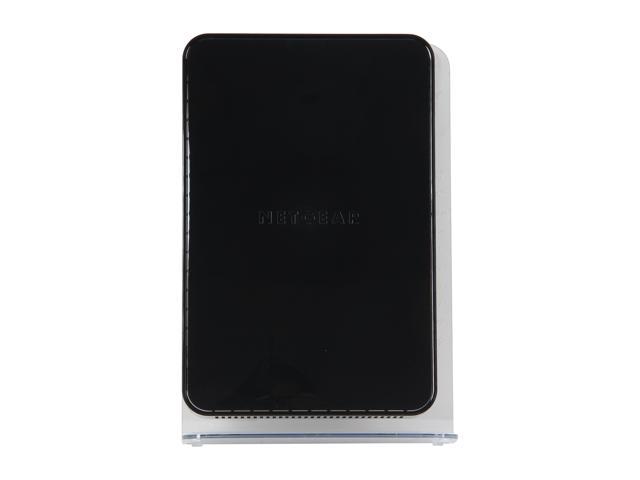 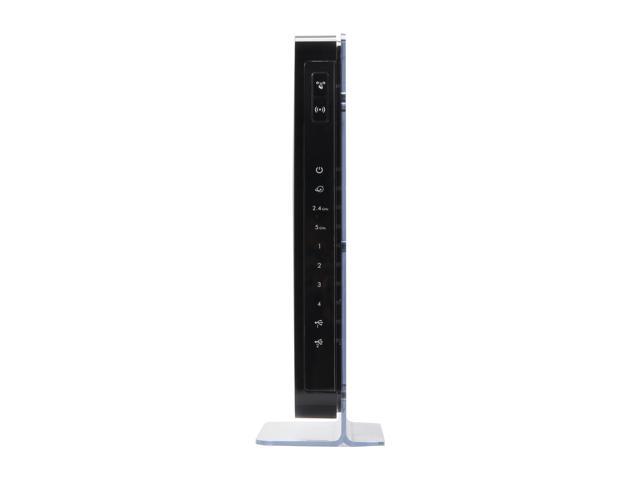 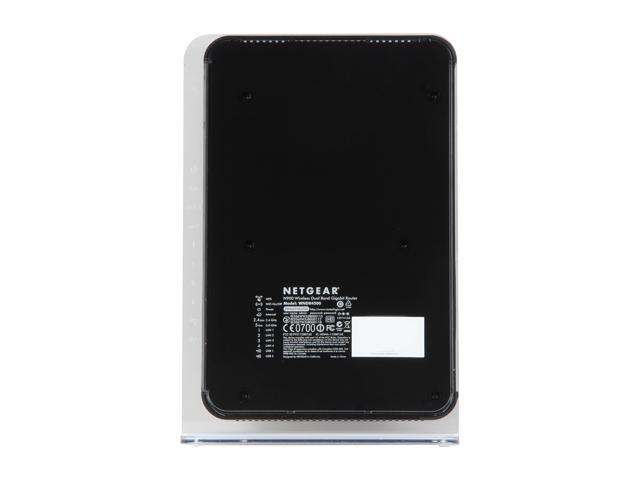 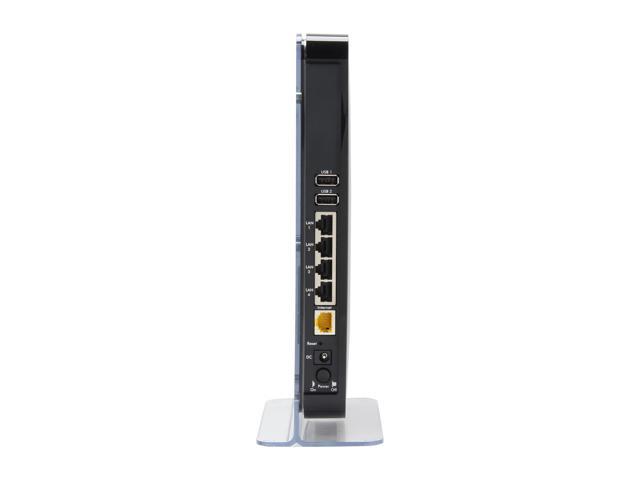 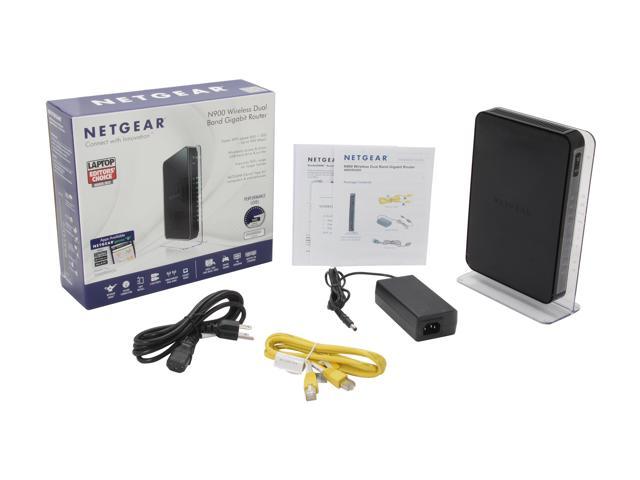 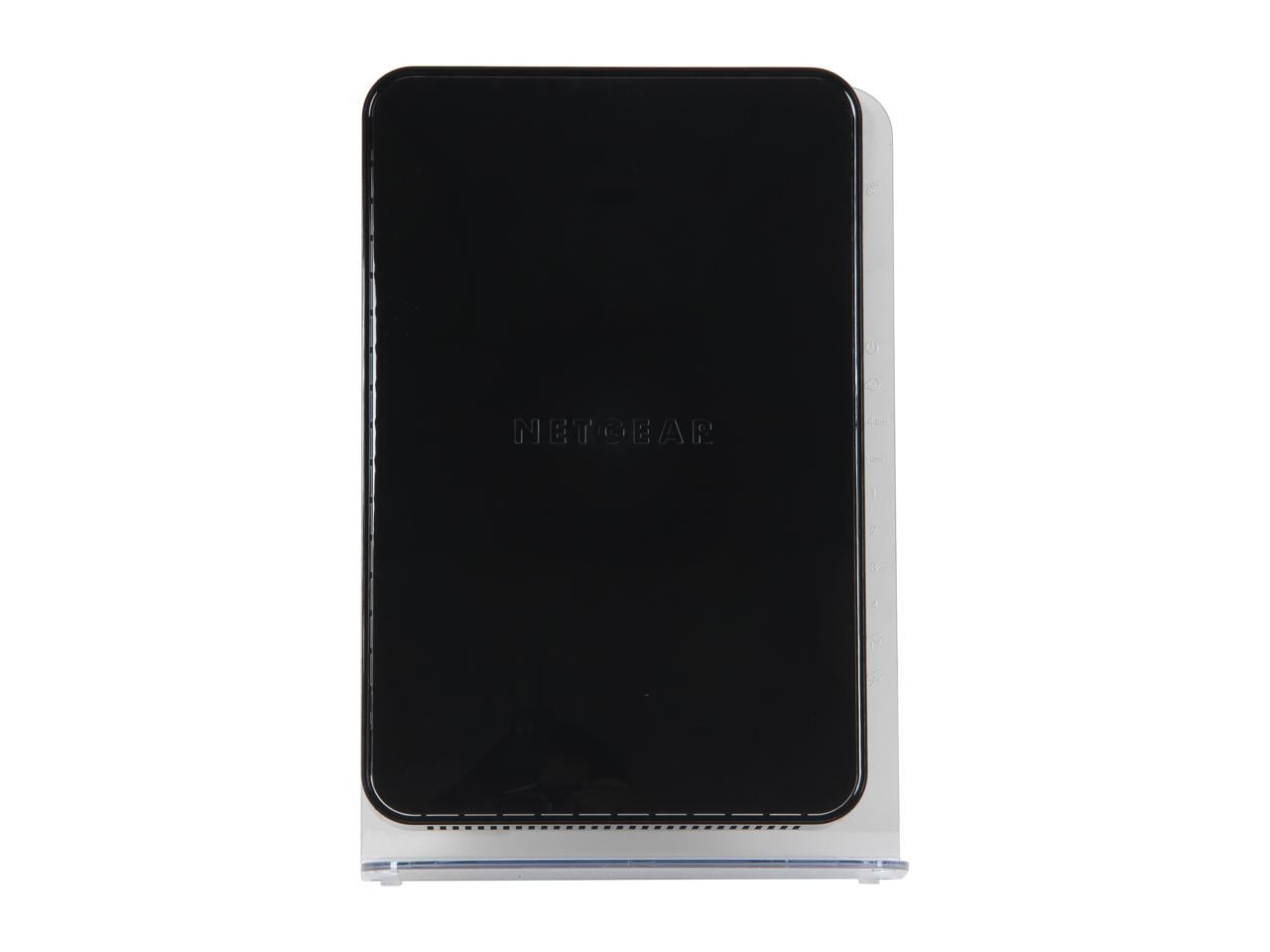 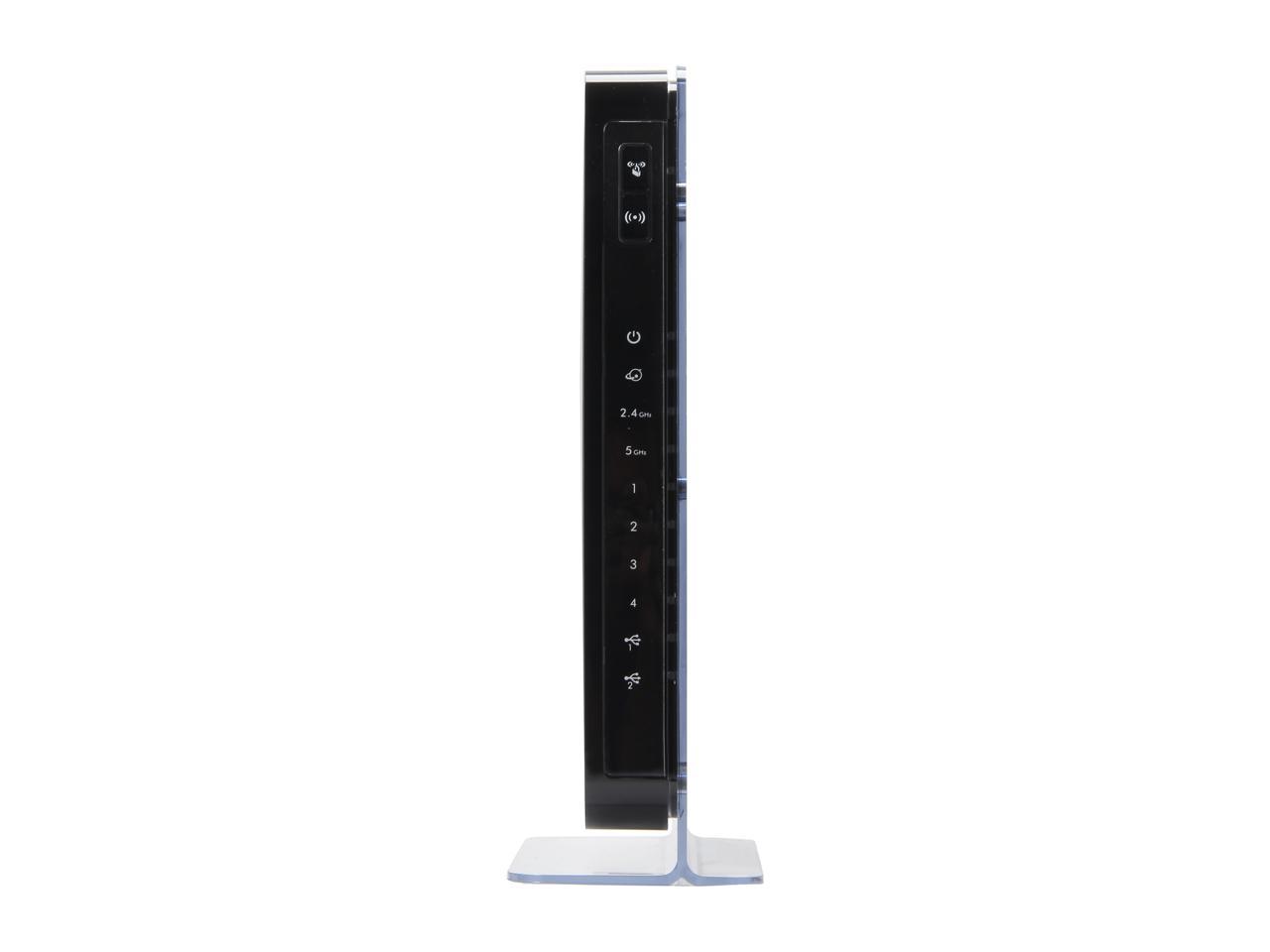 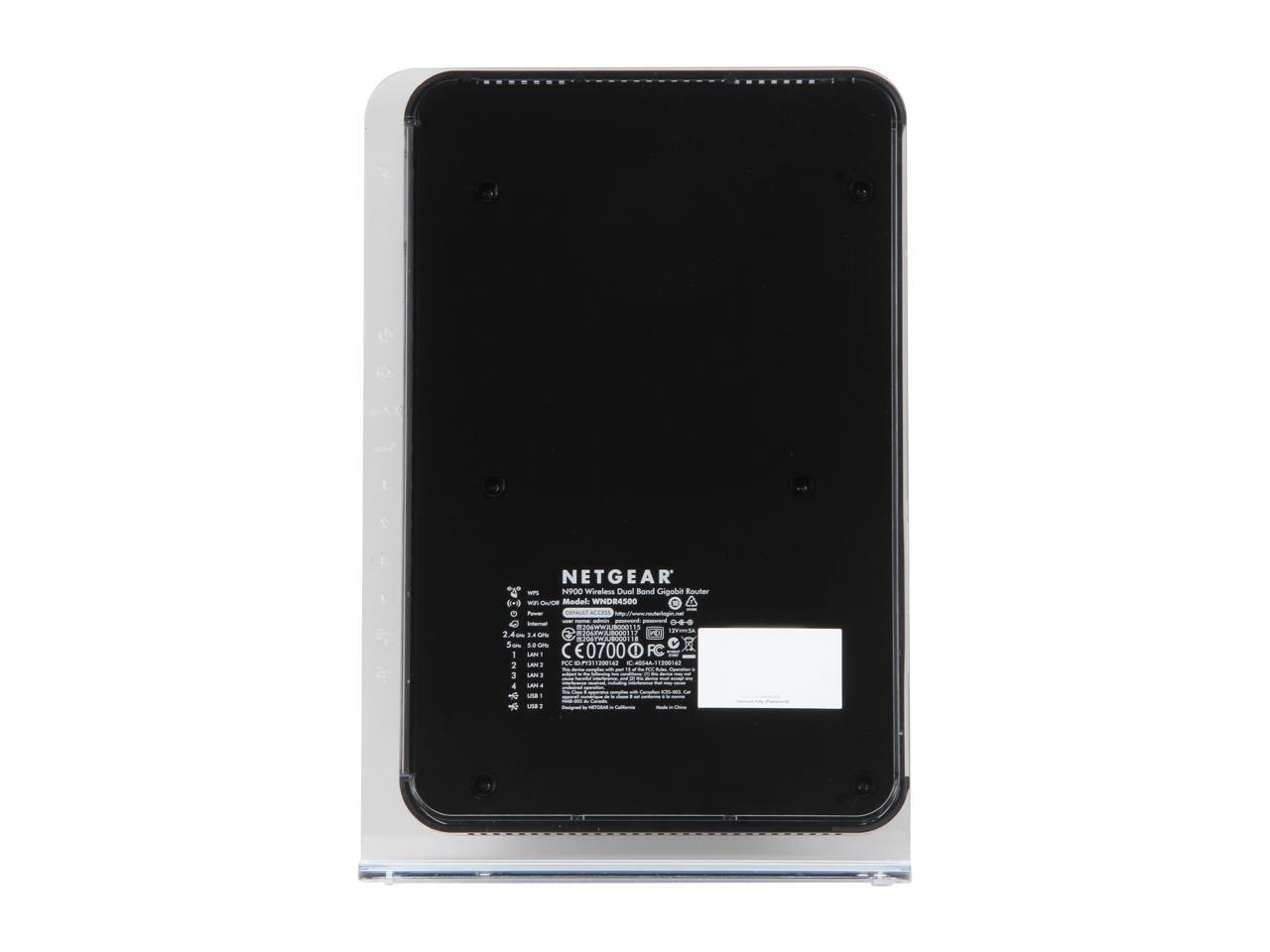 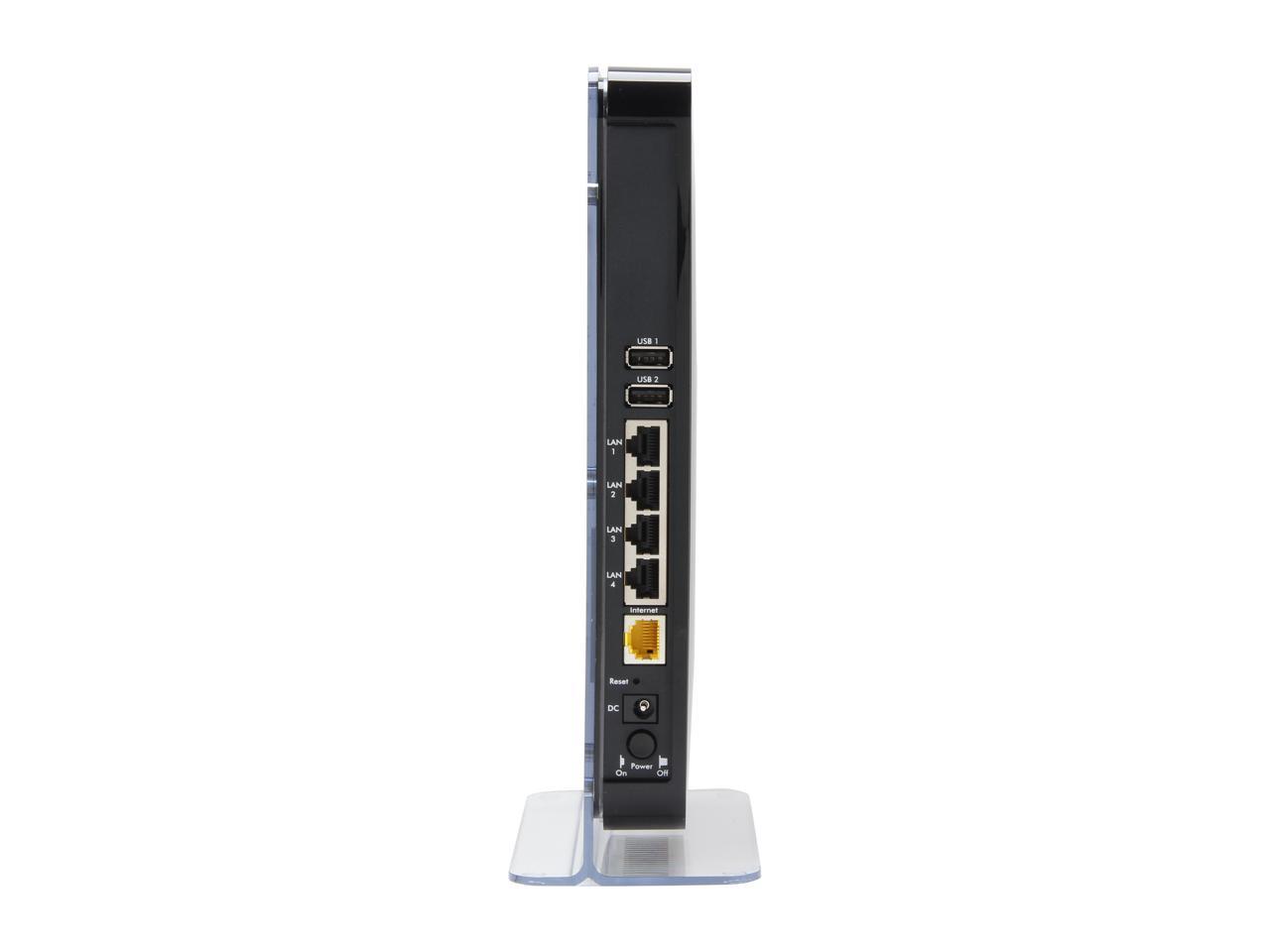 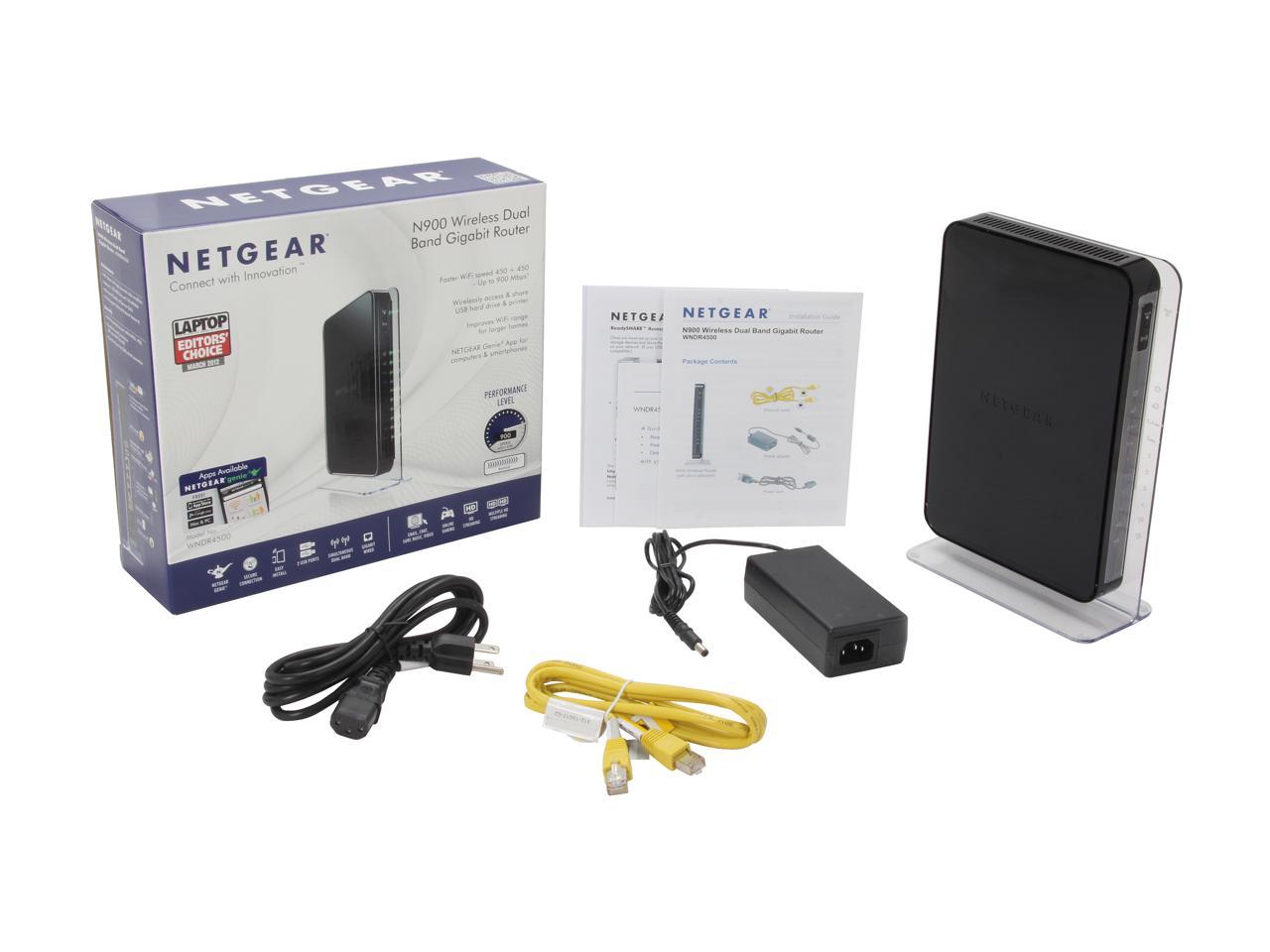 (243) Write a Review
OUT OF STOCK.
Fees for brokerage and duty included in price.
Overview
Specs
Reviews

Pros: -Consistently high performance. Streaming HD video content from a media center to multiple consoles and PC's on the network without any hiccups. -Excellent wireless signal strength. -Multitude of operating modes allows for using this in many different network configurations. Can function in Access Point mode to be used as a wireless switch or in Repeater mode to extend the range of an existing wireless network. -Currently using both 5Ghz and 2.4Ghz bands and both function as intended. -Beautiful design, I'm a big fan of the aesthetics of the entire Netgear WNDR series. -Seemless interface allows essentially any setting to be changed easily.

Cons: -My WNDR3700 had a removable stand which allowed for more flexibility in placing the device. The stand on this model does not appear to be removable. -I have a Netgear gigabit switch which has LED indicators on the RJ45 ports showing whether the cable is connected at 10/100 or 1000 Mbps. This has no such indicators.

Overall Review: -I've owned the WNDR3700 for a couple years and it's been wonderful. Honestly I had no need to upgrade but a friend was looking to buy a 3700 so I sold him mine for cheap as an excuse to upgrade to this. No complaints whatsoever, it's the same only better. -Currently my main computer is directly connected to my modem and so I'm running this router in AP mode and sharing internet with it via a Netgear N900 dual band adapter which is connected to the main computer. The computer is in a bedroom on the top floor corner of the house, the router is the in the living room downstairs in the middle of the house. 3 walls and about 40feet sit between them. The computer is sharing internet with it (and hosting a media server) via the 5Ghz band and the connection sits reliably at 450Mbps, only occasionally falling into the 300's. -The dual band signal broadcasting from the middle of the house results in full bars on every device in every room. -LOVE this router.

Cons: same range as the wr54gl for a lot more. Had to buy it locally but it was same price so I got lucky

Overall Review: Bought this to replace the wr54 and after trying a $25 router that wouldn't go 35 feet and it is doing great and was easy to set up like most routers and for fun I even tried using their software and it was easy also...that's a refreshing change.

Cons: Hate the attached base - makes it hard to wall mount. LED labels hard to read.

Overall Review: Wish I could attach external antennas. Would be nice to be able to assign names to attached devices that don't show a name in the web interface.

Cons: isn't a sexy girl willing to do anything :)

Overall Review: when i first purchased this router it was unusable and i had to use my old router witch was horrible but at least worked. thankfully a newer firmware fix its issues. ( 3 months latter ) since then its been in use working with no issues steaming 7 wireless HD cameras. 2 servers. 2 ipads. 2 iphones. 4 laptops. 3 computers.no issues and very fast. since then i upgraded to the new wireless standard AC router. i install this routers in my friends home and what a home it is 7 thousand square feet. she also has wireless ip cameras and a few tablets and computers. she having no issues and is very happy. it does not cover every where but close and best router she had to date. note; the router i updated to was also unusable at first the asus AC router but with newer firmware has also shined to glory. Always be prepared when buying the newest and greatest technology

CAROL B.
Ownership: 1 week to 1 month

Pros: - Wireless coverage is outstanding... You wouldn't think so with the internal antennas, but it has WAY better coverage in the 2.4ghz and 5 ghz ranges than the older Netgear WNDR3400 wireless router I had. - SPEED! 4 gigabit LAN ports, 1 gigabit WAN port for awesome wired networking. 2.4ghz and 5ghz get awesome speeds as well. - Setup is super easy if you've owned a Netgear wireless router before and if not, it's still super easy to get up and running. - Packed with features... even though I haven't used the DLNA, ReadySHARE USB ACCESS, ReadySHARE Printer, or ReadySHARE CLOUD features; it's nice to know that those features are there, if I decide to utilize them one day down the road.

Cons: - Size... I know it's not a big deal in some cases, but if you are limited on space, I'd check the measurements on this router first. It's WAY bigger than I expected and WAY bigger than the WNDR3400 I had. - Vertical configuriation... Seems like it's only configured to stand vertically, mounted to some sort of clear plastic. Not sure it comes off of the clear plastic OR if it's wall mountable. Not a huge deal if it's going to live on a desk, but it would be nice to have those other options (horizontal and wall mountable) available for a users choosing.

Overall Review: - Even though it's way bigger than I expected and seems to only stand vertically, I does not disappoint at all. The speed (wired and wireless) and coverage of the wireless network are just awesome. I tried to locate the router as close to the center of our house as possible and on the first floor. With this implementation, I can still get great wireless coverage all over the house, even in our garage which is to one side of our property and through a bunch of walls! - I don't see the draw to go to IEEE 802.11ac JUST yet... it's still in draft and isn't projected to be a common wireless standard until 2015 or later. This will hopefully be the router to hold us over until IEEE 802.11ac, whenever that is.

Overall Review: Bought it to replace a Netgear WNDR3700 (GREAT router -- until the 2.4GHz radio died -- a common problem). Nothing like the WNDR3700. I replaced it with an ASUS RT-N66U -- much better. The signal is much stronger, and it connects to my Droid RAZR, Motorola Zoom, and my wife's iPhone 4 with no problem. I've been a computer professional for over 25 years and I can't believe Netgear released this piece of garbage. Stay away!

Manufacturer Response:
Hi Anonymous, Thanks for your honest review. We're sorry about the disconnection problems you had with the WNDR4500, and we'd like to help if you still have the router. (You mentioned you have replaced it.) If you wish to contact us, please get in touch at newegg@netgear.com. Let us know the firmware version that the WNDR4500 is on, and also include any case numbers you received from support (if you contacted them at any time.) We look forward to getting things up and running for you. Regards, NETGEAR Team
carl h.
Ownership: 1 day to 1 week
Verified Owner
Give it a try.9/21/2011 9:31:27 PM

Cons: For some reason the lights on my unit don't blink. Other thoughts: Been running a 3700, 3700v2 and a 4000. The 3700 was solid - only needed to be restarted occasionally, good coverage with solid connections and solid performance at 2.4ghz, 5ghz radio was soft on signal, throughput and connection stability waivered. Replaced with a V2 when the 3700 failed and it was even more solid (don’t think it ever needed a restart while in service) but actual wireless performance was virtually identical to the 3700. Wanting a little more love at 5ghz tried the 4000 (N750) and was disappointed. Unit required frequent restarts, performance on 2.4ghz band was noticeably worse than the 3700 and 5ghz performance only modestly better.

Overall Review: So up steps the 4500. Been running for a week now and no restarts required, a good sign. Haven’t tested actual 2.4ghz throughput yet but users report 5 bars and stable connections. 5Ghz really rocks. Actual throughput on a Trendnet TEW-684UB is 12MBs (yes that is a capital B) compared to about 8MBs using the N750 and maybe 6MBs on a good day with the 3700. If my unit is a representative of shipping units this product is a real winner.

Pros: Stable connection to Internet. Support for IPv6. Great handling of VoIP while transferring files from one PC to another. Genie software (GUI).

Overall Review: So far, the router has been pretty stable. They will probably have tweaked it more with future firmware updates.