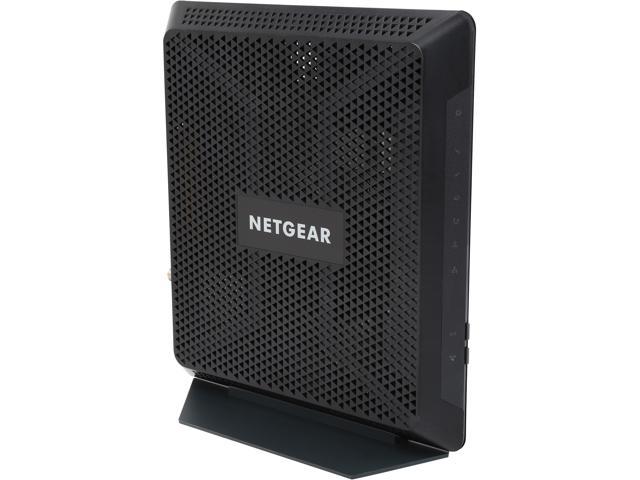 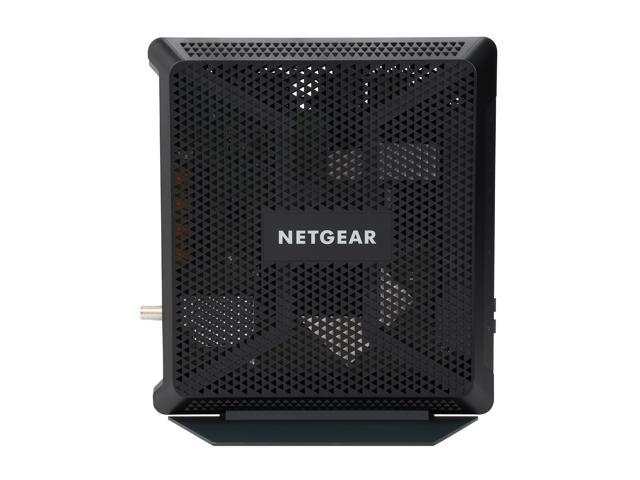 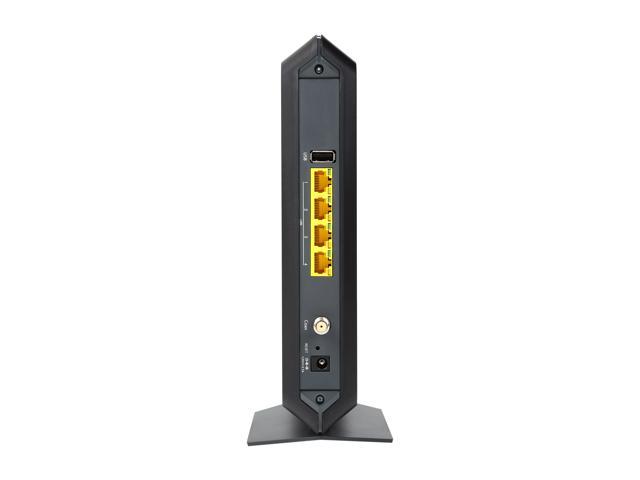 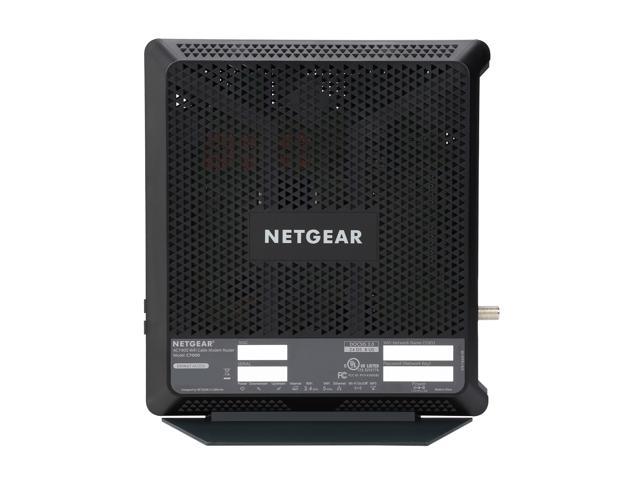 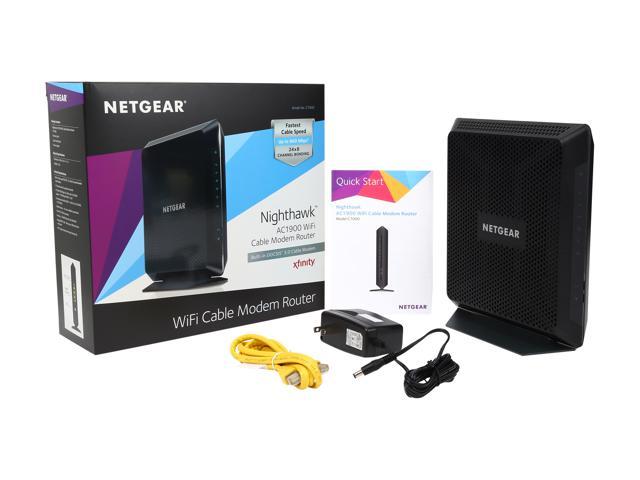 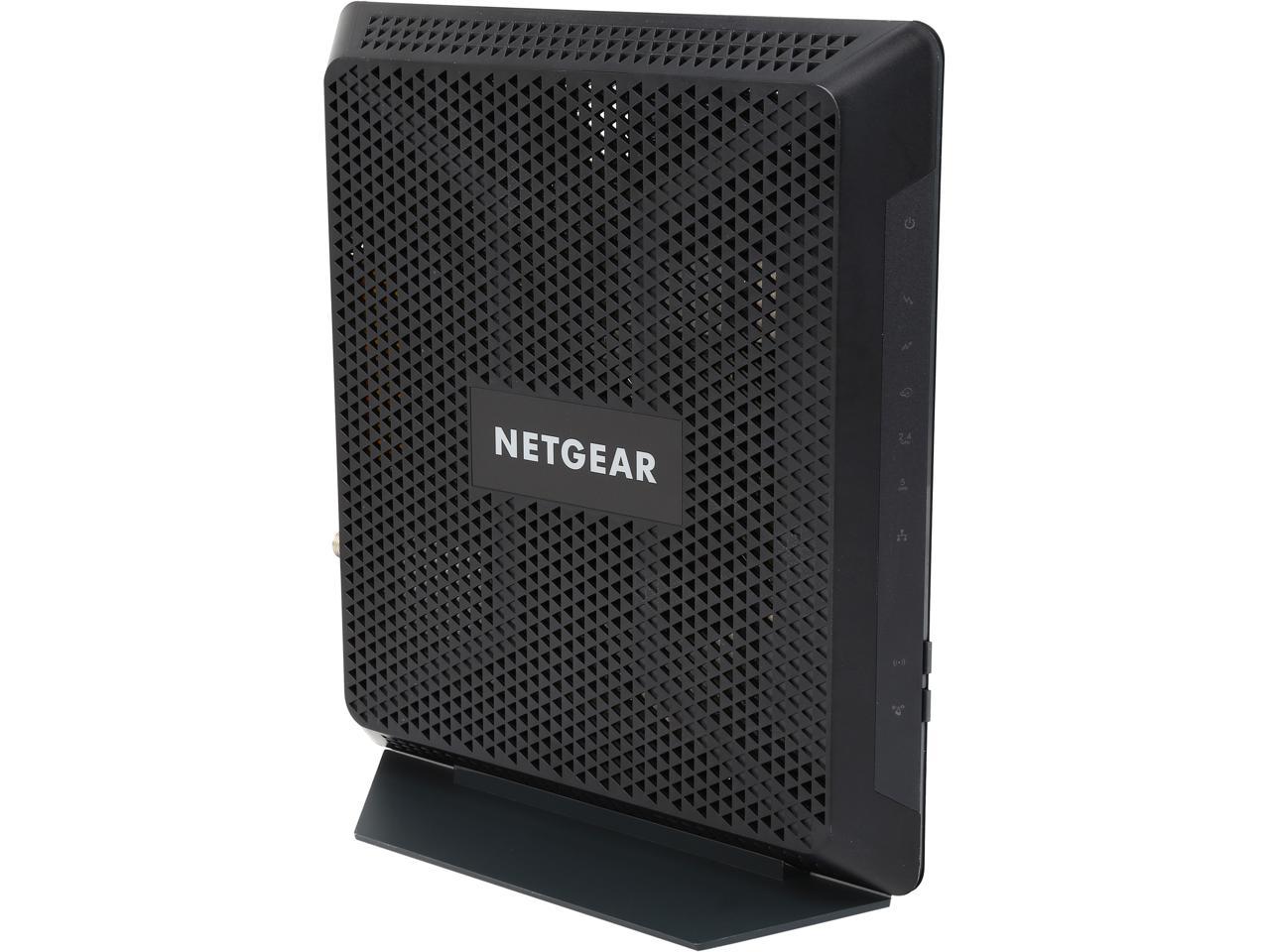 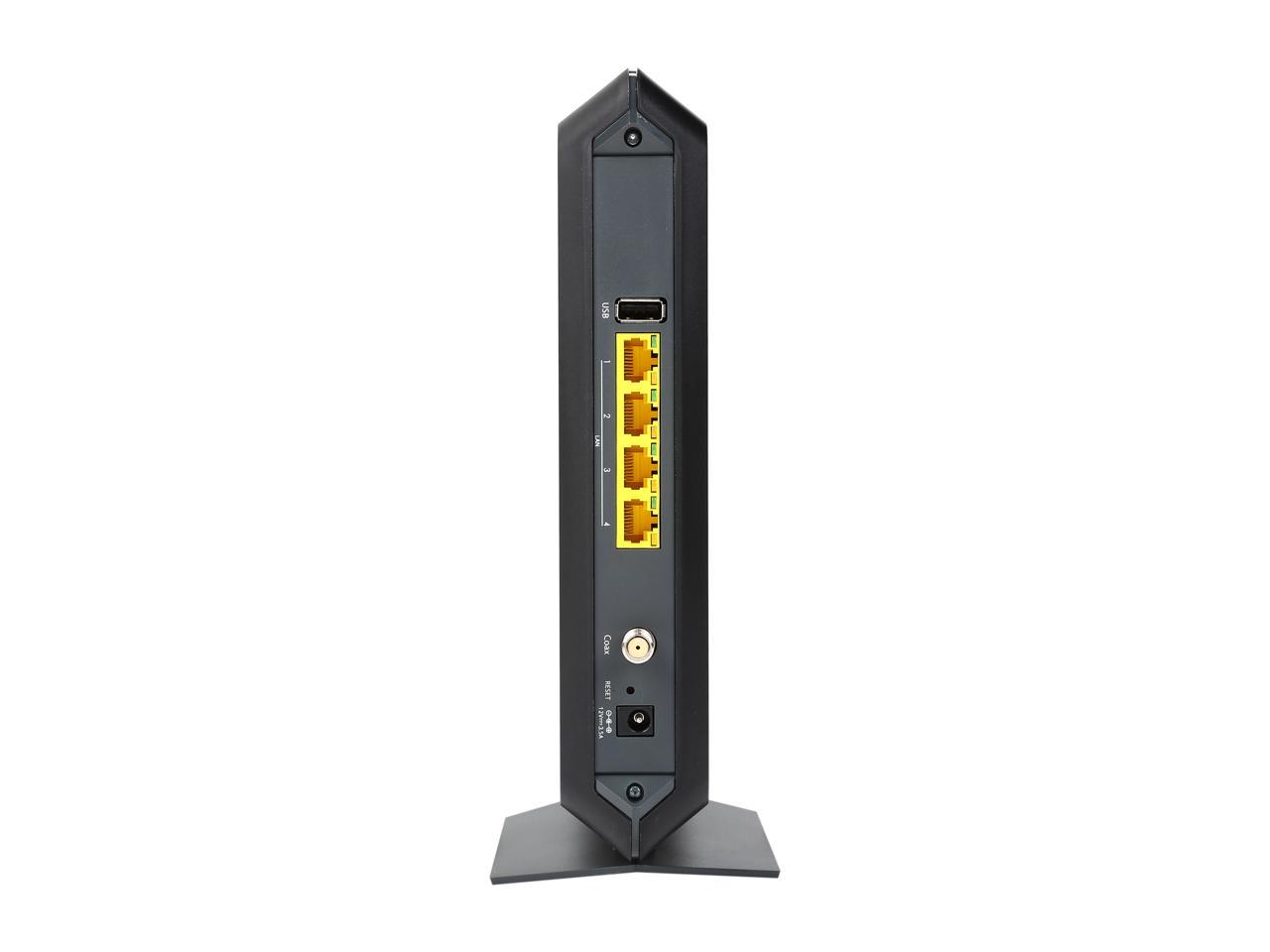 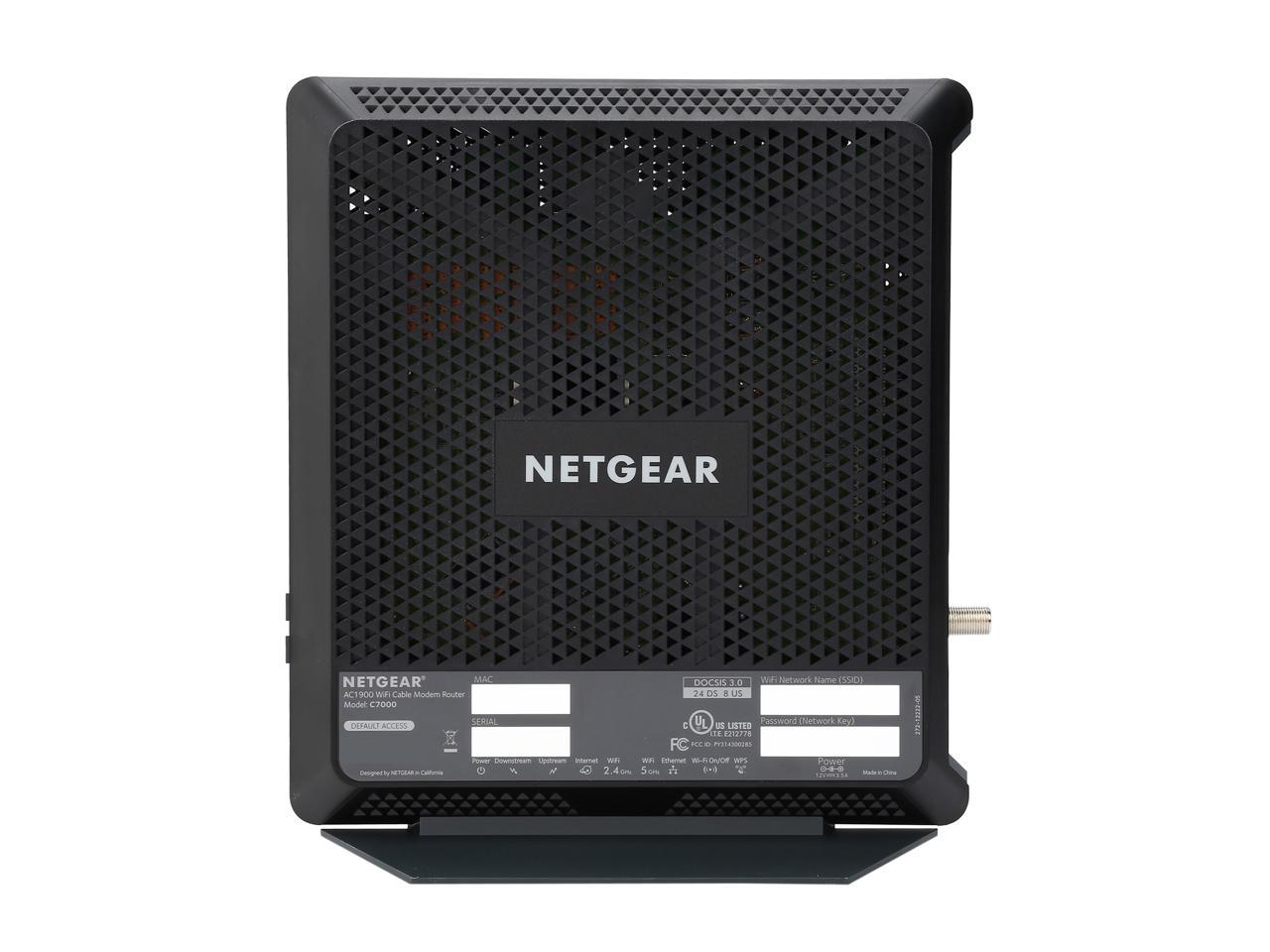 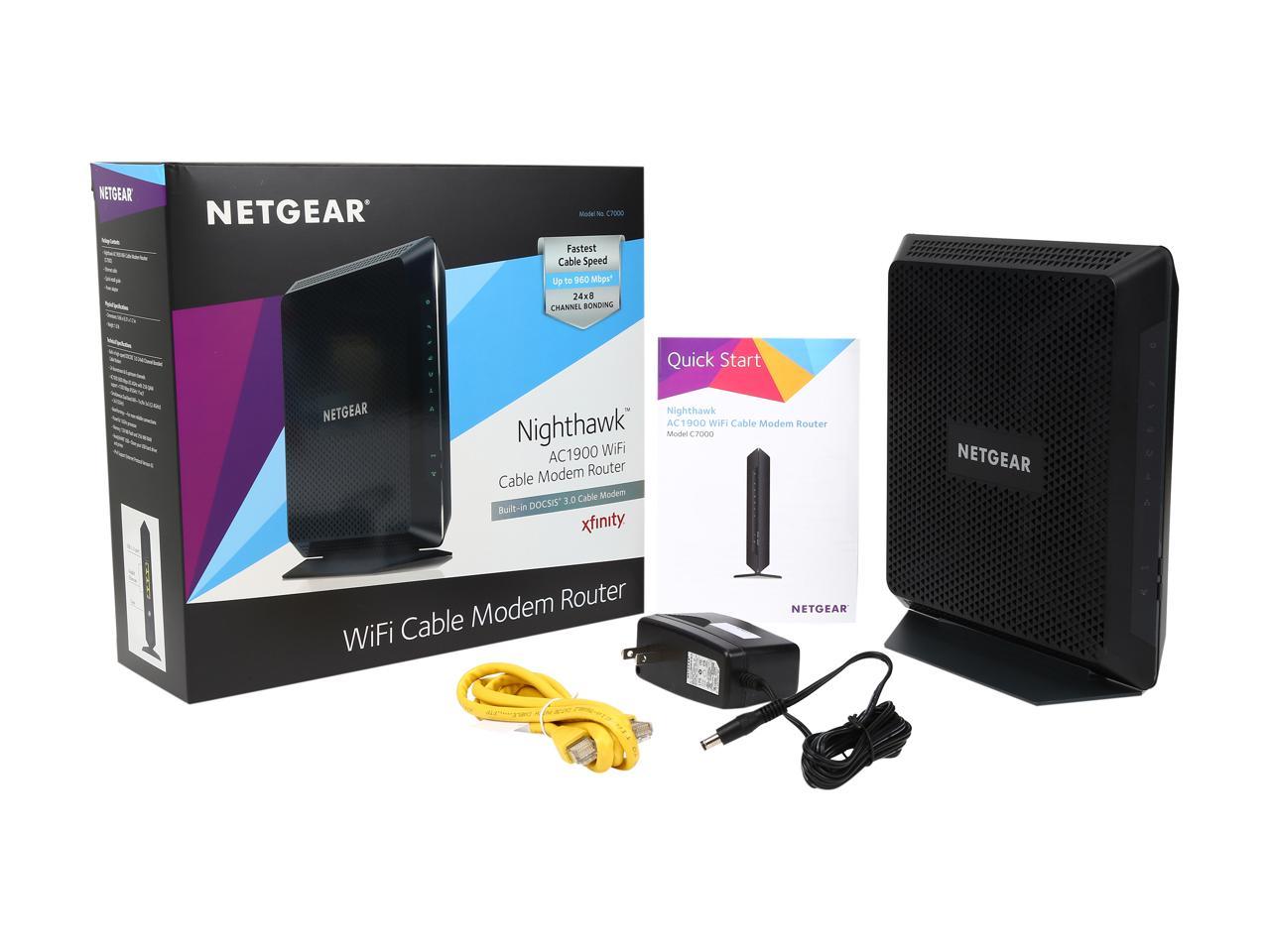 Pros: Set up was easy<br>Easy WiFi connection<br>Wired and WiFi speeds are fast<br>24/8 lanes handles 2 heavy gamers with movie streaming and internet access on up to 7 different devices at same time with no issues<br>Good control panel interface

Overall Review: I got this a week ago and have put it thru Hell with down loading movies, streaming movies and online gaming from the same PC with two other people using there devices at the same time and it is doing great, fast and smooth.<br>Well worth the money

Pros: -Had no issues setting this up and giving my mac address to my ISP. -This product has lived up to my expectations. -My ISP is noticeably faster. -Configuring the router part of the product isn't far or different from configuring the a normal Netgear Router. -This product with Time Warner Cable aka Charter providers.

Cons: -IF you disable the router section, the login into the UI part gets disabled, and you'd have to push the factory reset button to enable it back on. I couldn't get back to the Netgear UI portion after I disabled the router part. Doing this, I think it makes the C7000 a standalone Modem.

Pros: Simultaneous Dual Band (Broadcasts 2.4G and 5G at the same time) Has a guest network, which also has simultaneous dual band 4 gigabit Ethernet ports Great range. I would say maybe 100ft or more. I can FaceTime outside about 100ft away with no issues on 5G Not paying Time Warner 10$ a month anymore! Very easy set up Lots of easy to use options on the Netgear Genie thing Beamfoaming+ technology!

Cons: None. Worth every penny.

Overall Review: It says Comcast only in the title, because it was first approved by them and it has not been updated here. It is 100% confirmed with me that I use it with Time Warner Cable. The box I got even has the Comcast AND Time Warner Cable symbols on them. It is also on the approved page for TWC website. I called TWC and got this set up in about 5 minutes, eezy peezy. I know it is well beyond what I need, but it will pay for itself in 21 months! I enjoy the newer technology in it as well, such as the beamfoaming+ and simultaneous dual band. Highly Recommend!!

Pros: I wish I would have switched from the Comcast provided modem router months ago! We had a lot of trouble with the Comcast product not allowing use of our phones for surfing or even simple searches on our wired PC. I even purchased an extender that didn't really help. I was about to pick up our 4th (yes fourth) router from them when a friend suggested buying our own. I'll admit, it's only been one weekend, but so far, we're able to use multiple phones and surfing is lightening fast on the PC and also extremely quick on the phone.

Cons: Nothing so far. Easy set up. Took a while on the phone for Comcast to get us converted, but I don't see that as Netgear's fault.

Overall Review: Definitely recommend. Could have likely bought a slightly less expensive model, but my hope is I won't need to upgrade for a few years with this model.

Pros: - Easy to activate with Xfinity.. - The dual core processor handles my speeds and networking demands with ease. - No latency spikes - Not vulnerable to Cable Haunt (to the best of my knowledge)

Cons: - Upstream light flashes continuously because Comcast/Xfinity only provides 5 upstream channels where I live. - Drops upstream channels. - Downstream channels might not be enough depending on your plan. - Slower than the Comcast XB6 - Requires physical reboot during activation

Overall Review: The Netgear C7000v2 is a device I purchased out of need, rather than want. However, it handles my connection speed without problems, and is not vulnerable to the Cable Haunt vulnerability. However, it has it's share of firmware bugs... including one that has the upstream light flashing continuously because my ISP (Comcast) only provides 5 upstream channels in my area. This makes it impossible to use the lights for troubleshooting. Another firmware bug requires a physical reboot (physical reboot meaning unplugging it) during activation. UPDATE 6/19/2020: The modem has dropped two upstream channels (status went from locked to not locked). My line and node has been verified to be within spec by an xFinity technician. If I had a choice, I would choose a different modem+router combo, but I am looking towards Gig speeds in the near future. For most people, this is more than enough and will serve and protect them well. Hence, four stars.(Three stars now that it's started to drop channels)

Cons: Constantly drops my internet connection at least once a day. Since the last update, it no longer recognizes my attached external hard drive Instable

Overall Review: I will never purchase another Netgear product again. This was a $200 mistake I will never make again with Netgear.

2 out of 2 people found this review helpful. Did you?
Manufacturer Response:
Hey, We want to get your C7000 working perfectly and are so sorry that you've started having the trouble. Keep in mind that the your unit comes with a 1 year hardware warranty and that we are always here to help. Please email us at netgearteam@netgear.com with a link to this review, the serial number on your unit, and any other details that you think may help. We are sorry for any inconvenience. Regards, NETGEAR Team
Troy C.
Ownership: 1 month to 1 year
Verified Owner
Drop's Once or Twice a day - Forget the Warranty8/7/2016 1:32:12 PM

Pros: I loved this modem the first 8 months. Great speed and reliable.

Cons: Price. I didn't buy this before when I should have but the price was so high. I'm sorry I bought it now. Keeps dropping connection once or twice a day, have to reboot to reconnect.

Overall Review: Contacted Netgear they wanted $90.00 to try and help me fix the C7000. I have two months before the warranty expires. They would not help me until I paid $90 for 6 month support contract. I'm never buying Netgear again. Going to look for a new product.

6 out of 7 people found this review helpful. Did you?
Manufacturer Response:
Hey Troy, We want to get you a replacement and are sincerely sorry that you've ran into trouble after eight months. You are still under the hardware warranty - please email us at netgearteam@netgear.com and include a link to this review with any other details, the firmware that is running, and the serial number on your C7000. Also, make sure to include the case numbers support gave you so we can investigate. Regards, NETGEAR Team
wendy r.
Ownership: 1 week to 1 month
Verified Owner
This thing is awesome!10/16/2015 4:55:29 PM

Overall Review: I am using this with cox. On a 300mbit connection I was getting over 270 over WiFi on the 5ghz. Not bad. Cox didn't want to activate it sobi told them it was a netgear c 6300. Enjoy!