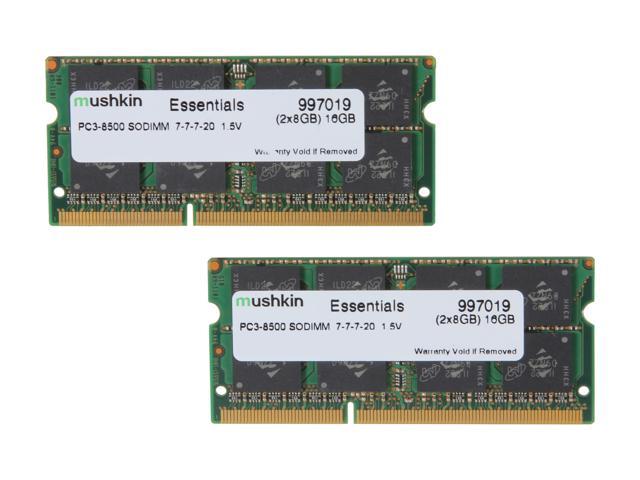 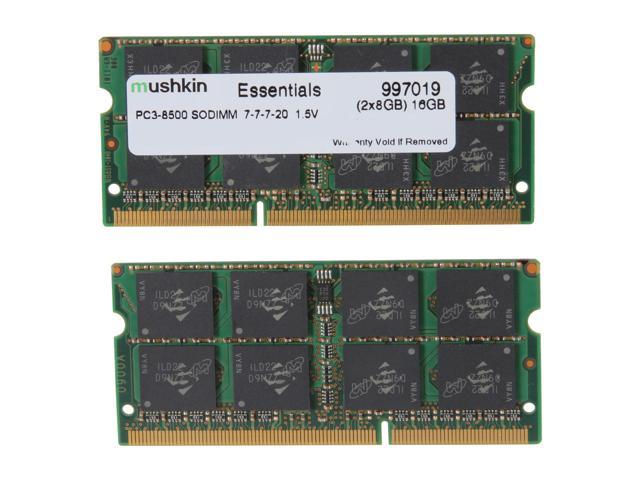 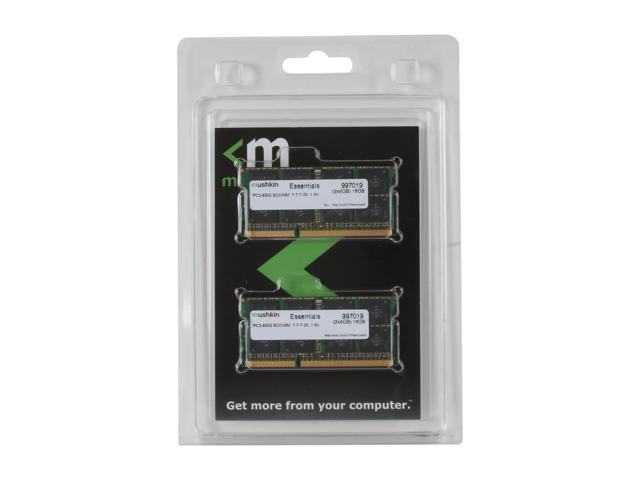 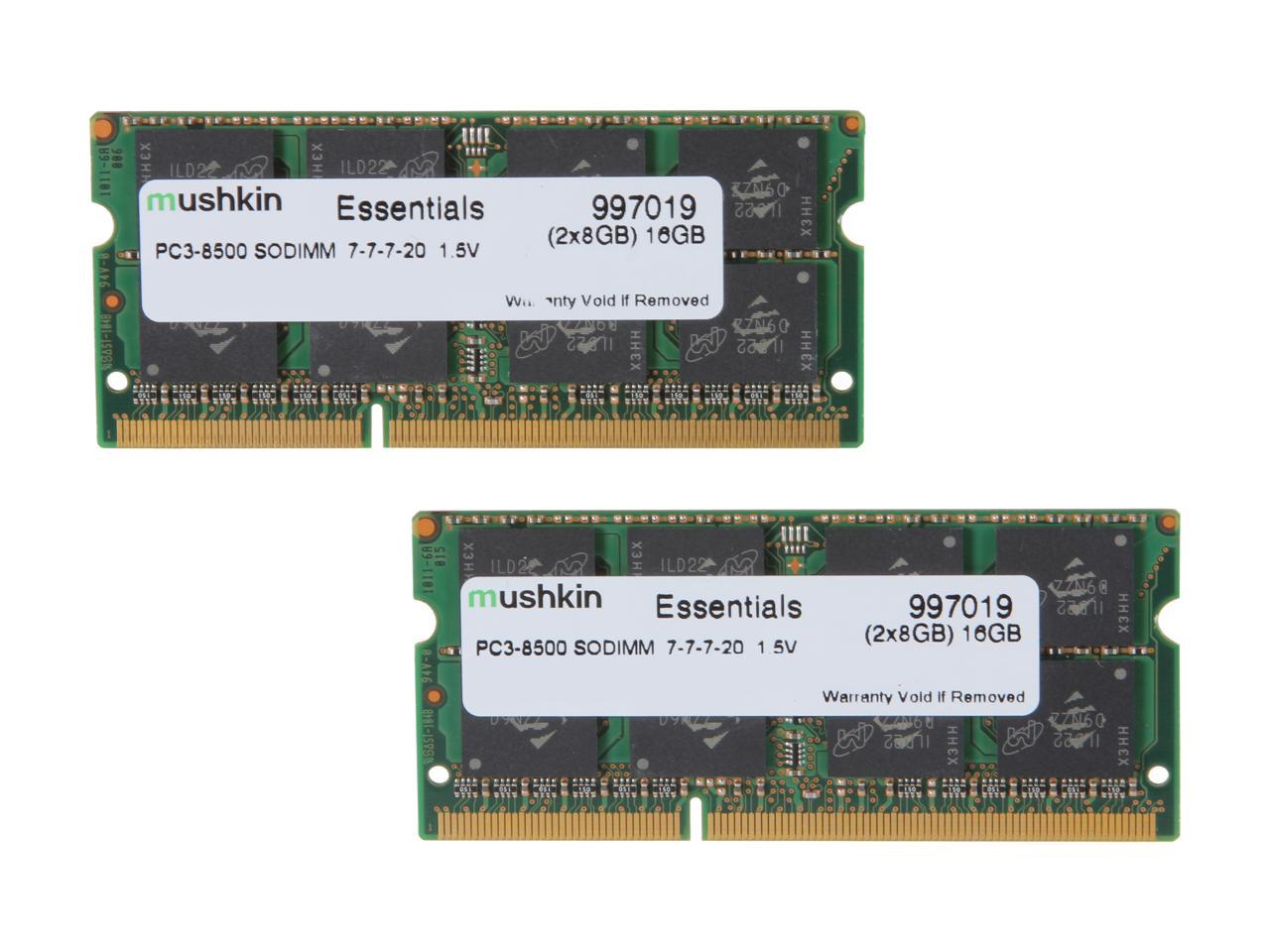 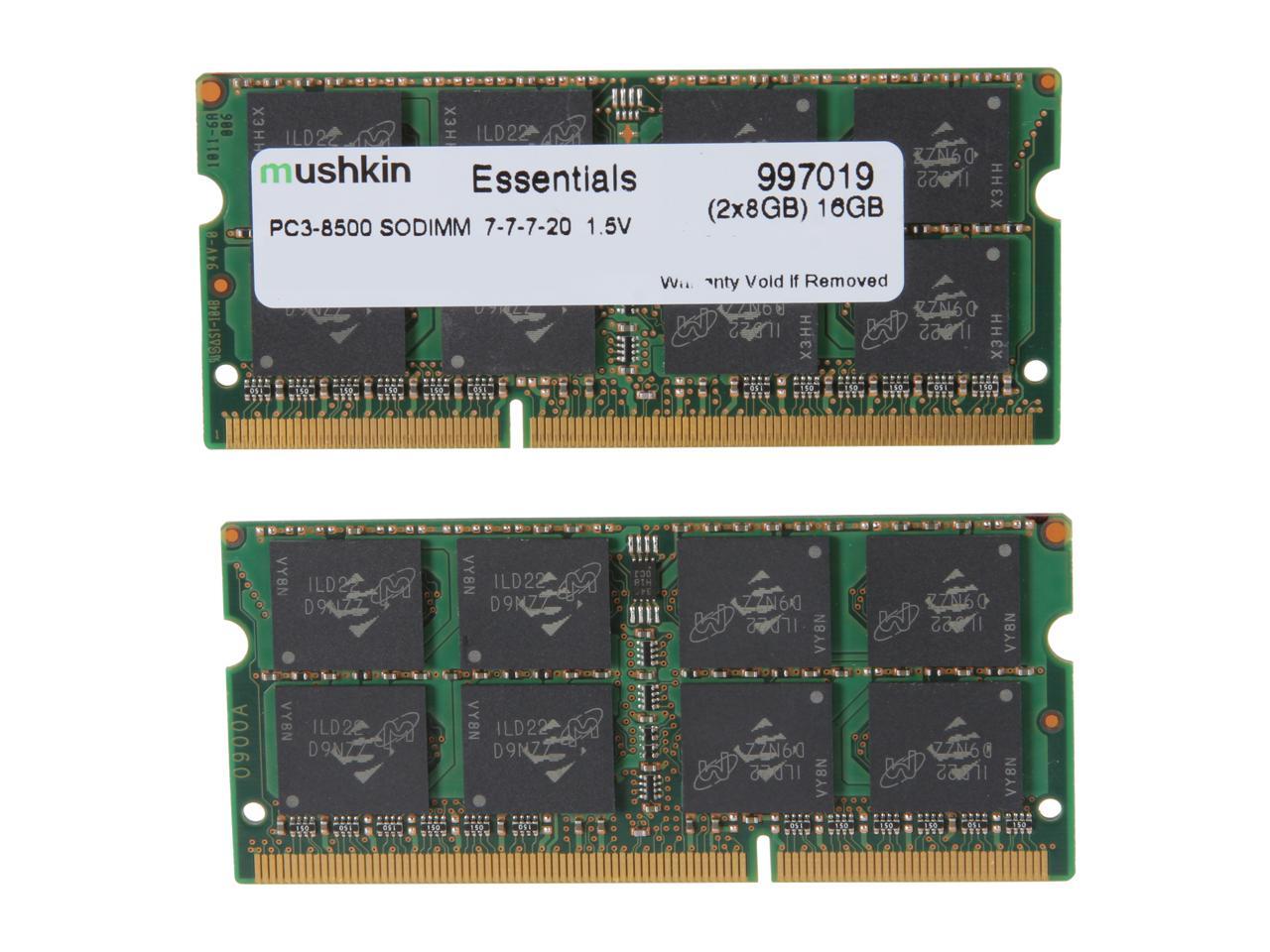 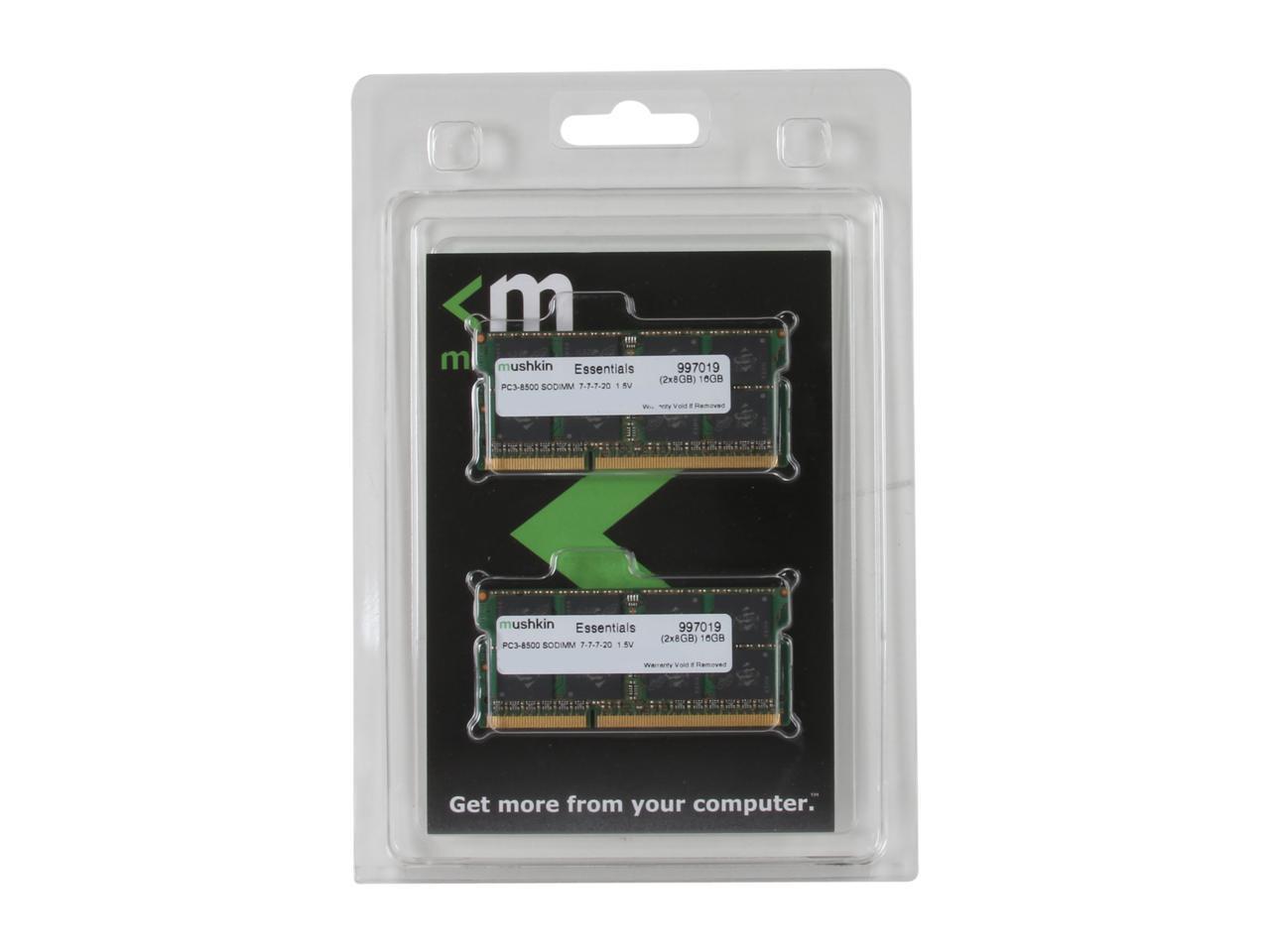 (17) Write a Review
In stock.
Ships from United States.
Fees for brokerage and duty included in price. Most customers receive within 5-32 days.
LOADING...
Overview
Specs
Reviews

Memory upgrades for every occasion

Want a faster, smoother-running computer? You'll need quality memory. Whose memory modules can you count on? Easy answer: Mushkin is the only option when you're looking for the best results. Whether you're looking for an advantage in online gaming, want to rock the world with your music or multimedia productions, or need rock solid performance for your business, we've got you covered.

Learn more about the Mushkin Enhanced 997019

Pros: Within 15 minutes I had this and a mushkin 480gb SSD installed into my daughter's mid 2010 2.4ghz white MacBook and now the machine screams! Boot time's seconds instead of minutes. Snappy, snappy! Highly recommend AND highly recommend mushkin throw some comps my way with this awesome post! No really, mushkin, I really do have a few more laptops that can use more of your goodies!

Cons: No long term reviews but a week in, so far so good.

4 out of 4 people found this review helpful. Did you?
Manufacturer Response:
Thank you for choosing Mushkin. We appreciate your feedback and support!
Rahul K.
Ownership: 1 day to 1 week
Verified Owner
Super fast and compatible with my Macbook Pro Mid 2010 7,1 version1/26/2016 2:39:07 PM

Cons: Slight slow performance in benchmarking test as compared to original memory cards, but it's less that 1%.

Overall Review: Cons shouldn't be considered if you are thinking of buying this. This is available at excellent price in Newegg

4 out of 4 people found this review helpful. Did you?
Manufacturer Response:
Thank you for choosing Mushkin. We appreciate your feedback and support.
Taylor B.
Ownership: 1 day to 1 week
Verified Owner
Works in my MacBook Pro despite official Apple recommendations1/16/2016 2:01:20 PM

4 out of 4 people found this review helpful. Did you?
Manufacturer Response:
Thank you for choosing Mushkin. We appreciate your feedback and support.
Lilly L.
Ownership: 1 day to 1 week
Verified Owner
Upgrade for a MacBookPro7/23/2016 4:36:04 AM

Pros: Upgraded a MacBookPro 13" mid 2010 from factory 4GB to 16GB. No problems. Note that this model can support 16GB, although Apple says max is 8GB, provided you have latest EFI firmware and SMBIOS. Several Mac models can actually support more memory than Apple specs, but check first at either OWC or everymac dot com, for every model you can find out the actual max it can handle, if it is different from what Apple says it can support. At first Mac didn't recognize memory but that was my fault when I installed first time, I thought the chips were seated, but the two chips stack on top of each other and share the same release clip. when I pushed in the last (top) chips, i had loosened the one underneath. Reopened, and made sure both chips were pushed flat and down, then it was fine. Upgraded the HDD to a SSD at the same time, and you would never know it was 6 year old laptop, it FLYS! Upgraded OS X to El Capitan, and laptop feels as fast as new laptop, which tells you that you don't need the latest, fastest CPU for most things, just plenty of RAM and a good SSD. The price on this Mushkin was $52.99 for 16GB, only about $12 more than what other brands were charging for 8GB. SSD was about $50 on sale, so for about $100 have a laptop that is like new. Chips came packaged well, in firm plastic case in bubble wrap mailer. Wife is very happy, this is her laptop, she feels like she has a brand new machine!! For this laptop, if you upgrade to SSD, you don't need the top of the line, the laptop is SATA II, 3Gbs, not SATA III, 6Gbps, so one of the entry level TLC based SSD models is fine, what ever is on sale

Cons: None, was hesitate at first about buying memory that wasn't specifically for 'Apple' computers. You often hear that Apple computers are finicky about memory, and they are, the timing specs have to be spot on. As long as the memory is trusted brand and not 'grey' market chips, that meet the specs, it should work. By specs I mean not just the speed, but CAS and latency specs.

3 out of 3 people found this review helpful. Did you?
Manufacturer Response:
Thank you for choosing Mushkin. We appreciate your feedback and support!
Anonymous
Ownership: 1 day to 1 week
Verified Owner
My MacBook is happy and so am I4/30/2016 8:56:24 PM

Pros: This works perfectly in my 2010 MacBook Pro 13" 2.4ghz. The speed of my laptop has quadrupled!!! Don't even hesitate to buy this RAM and especially for the price. I'd give it 10 stars if I could.

Pros: Excellent price for RAM, sort of unbelievable Comes packaged nicely, doesn't look like rebranded RAM First of 3 sets of 16GB (2x8GB) RAM to work in my Mid 2010 Macbook Pro (right speed and no defective sticks were the critical obstacles I overcame) No crashes so far

Cons: So far no cons.

3 out of 3 people found this review helpful. Did you?
Manufacturer Response:
Thank you for choosing Mushkin. We appreciate your feedback and support.
Tyree S.
Ownership: less than 1 day
Verified Owner
Working for me2/27/2012 12:35:50 PM

Pros: It's ram with 7 Cas It was the cheapest Worked with my MacBook Pro 2011 1st gen

Overall Review: I bought an old Macbook Pro from mid-2010 that came with 4GB RAM. It was already slow but the upgrade to El Capitan made it worse. I put this RAM in it and it moves along much faster now (I got an SSD as well though) and I don't have to worry about leaving lots of stuff open or multiple users logged in. Been running for almost a month now and no issues. Definitely worth the money. BTW if you are looking to upgrade your old MBP to 16 GB RAM check and make sure your firmware has been updated. El Capitan updated my device FW as well so I had no issues, but some MBP's can't support 16GB RAM, luckily mine could (even though Apple's site says it only supports 8 GB). Just do some research to get a good idea first.

2 out of 2 people found this review helpful. Did you?
Manufacturer Response:
Thank you for choosing Mushkin. We appreciate your feedback and support!