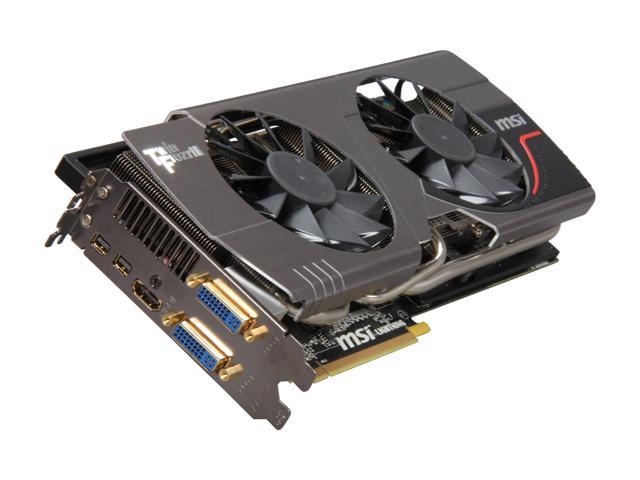 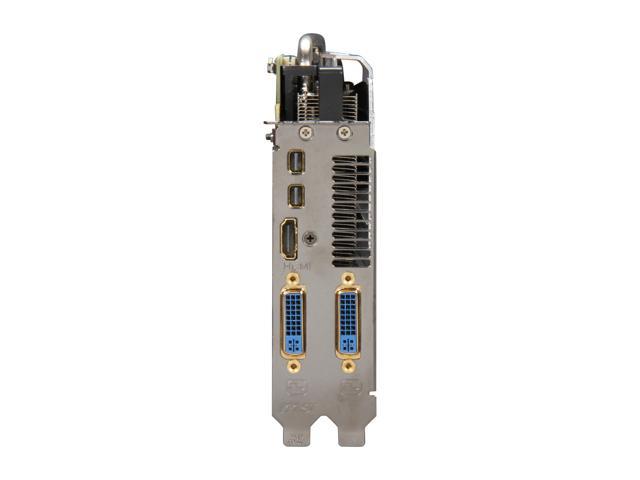 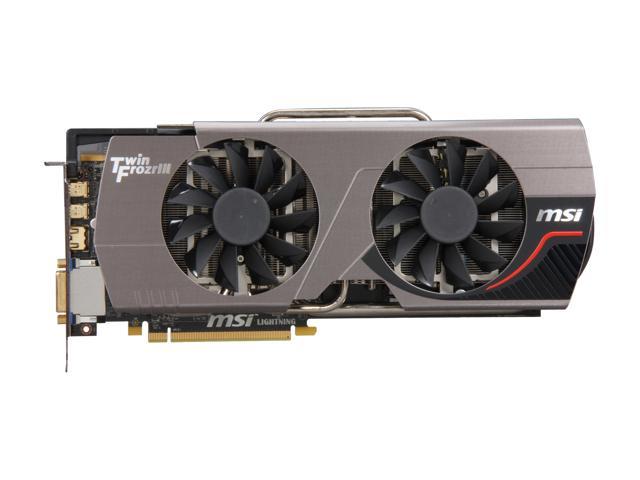 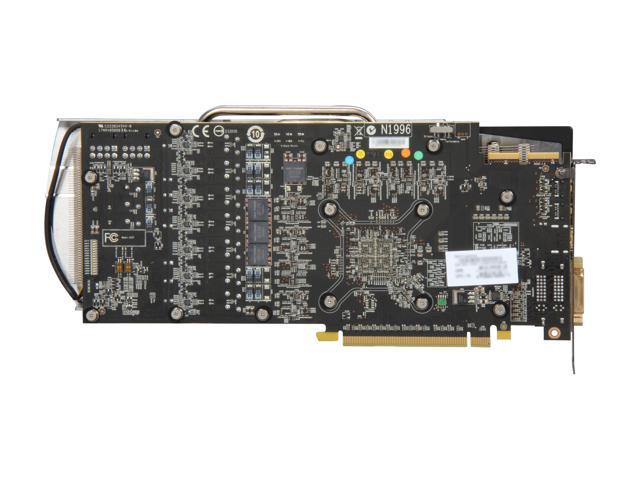 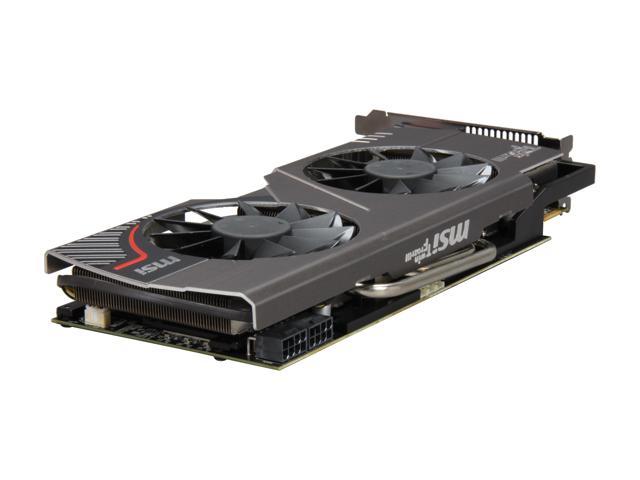 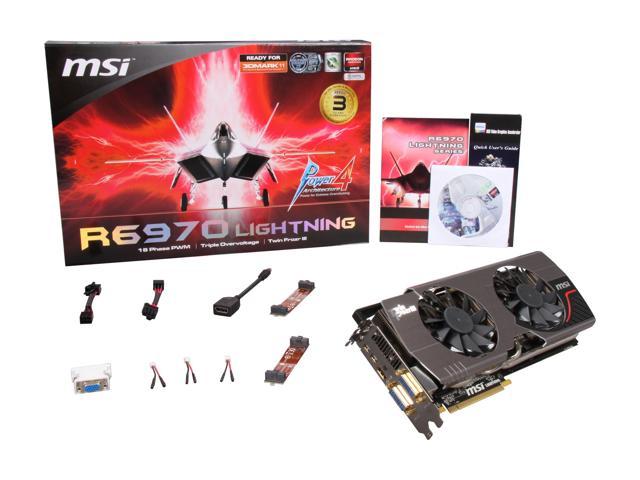 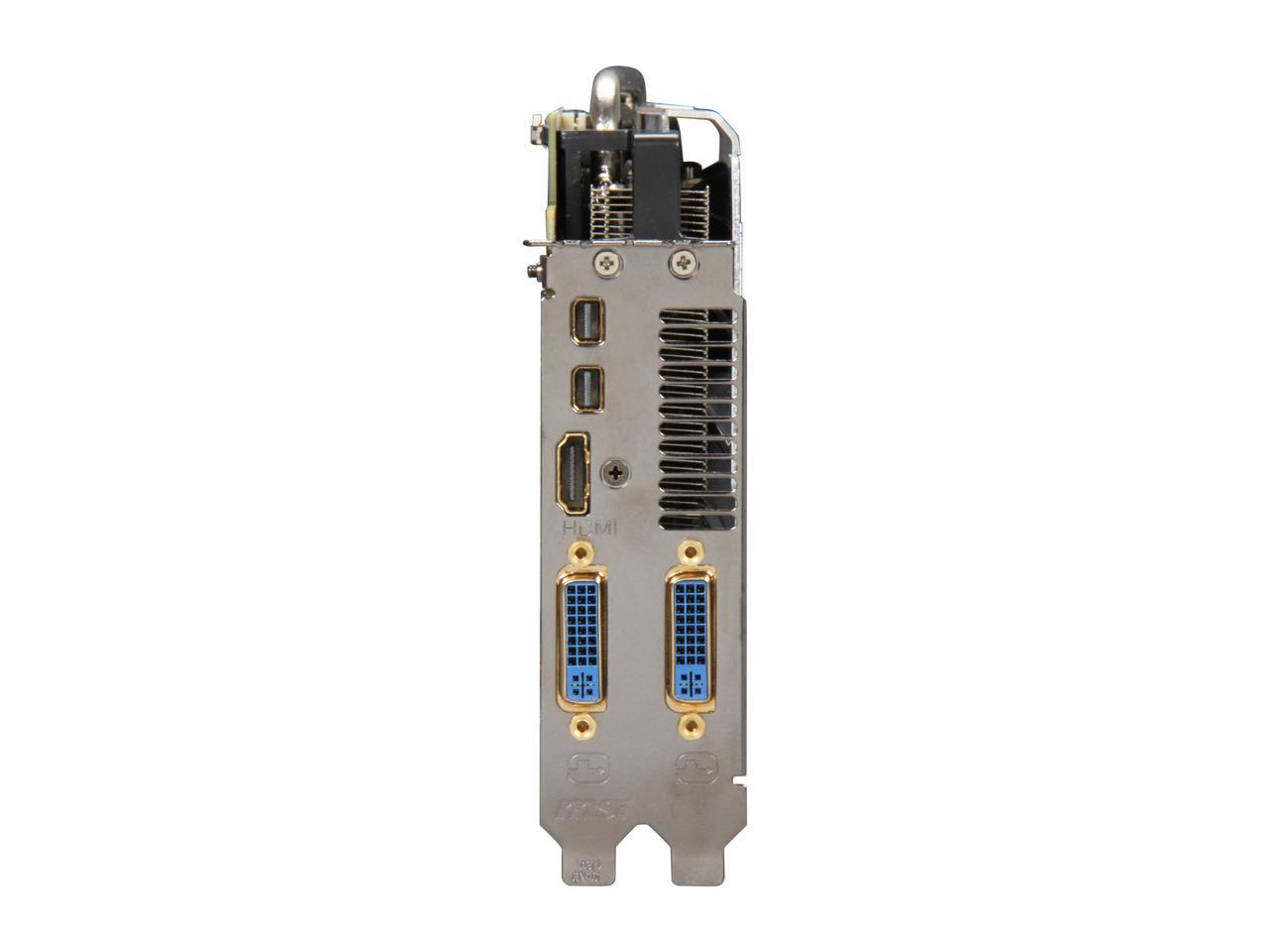 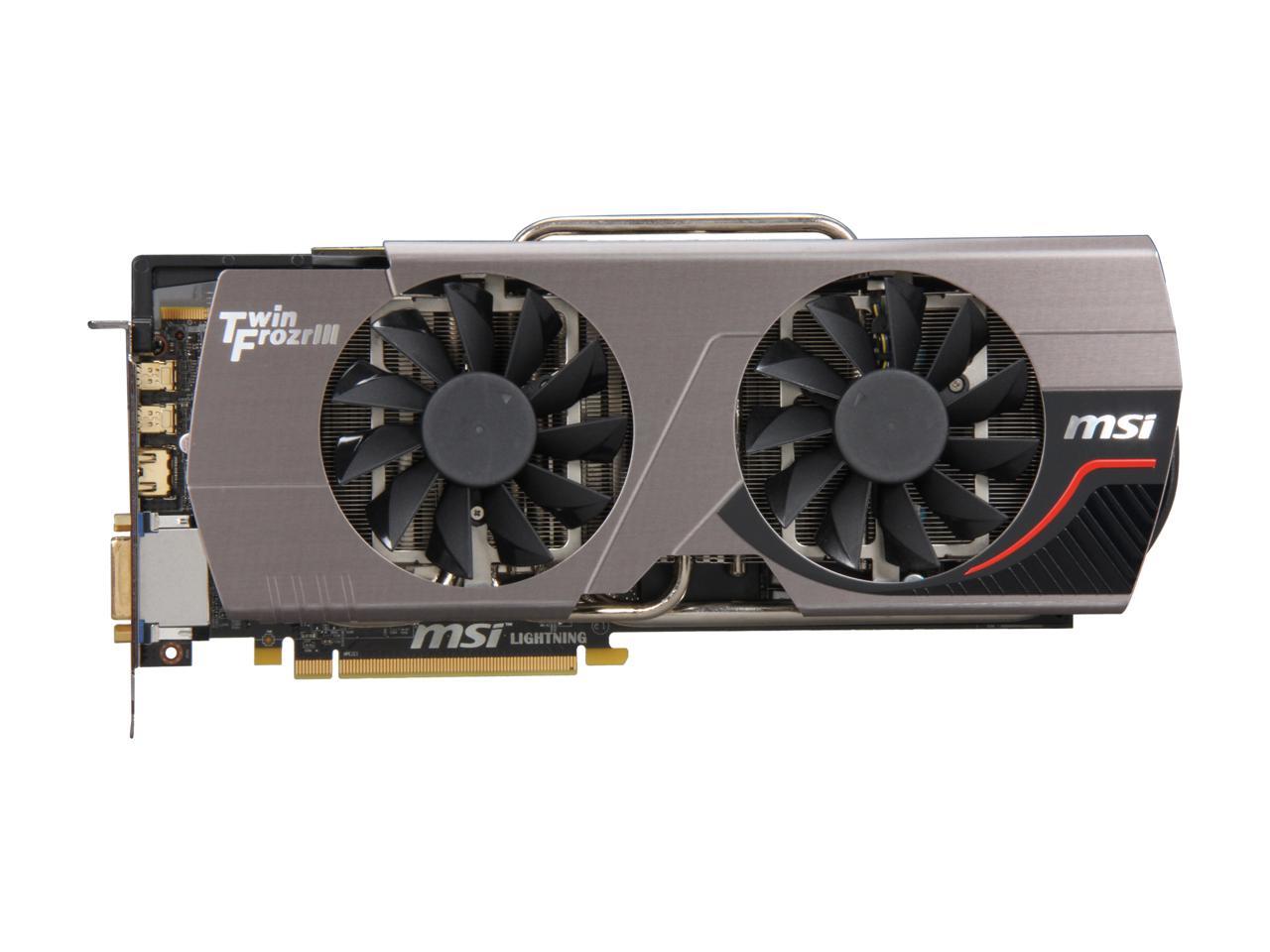 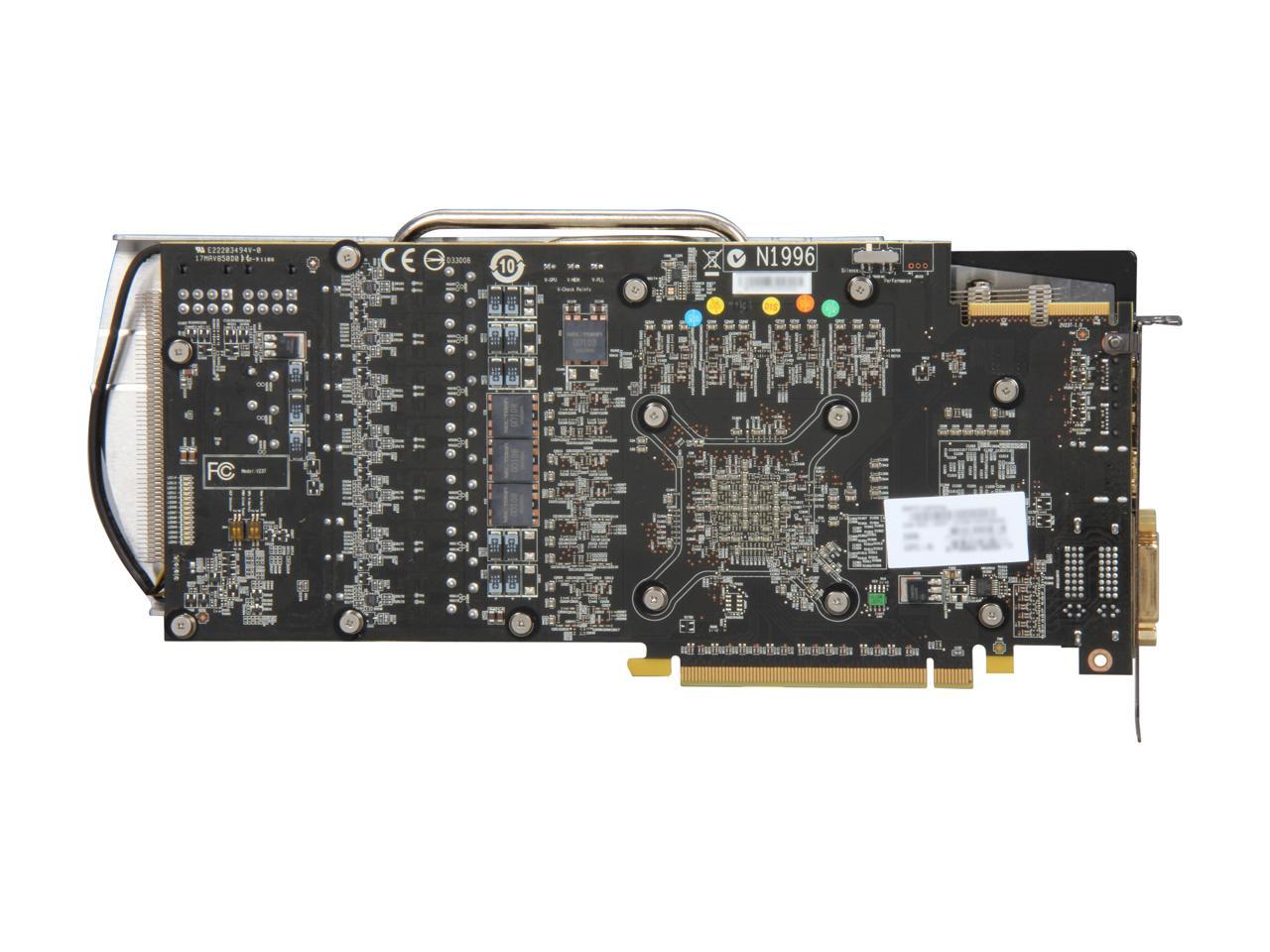 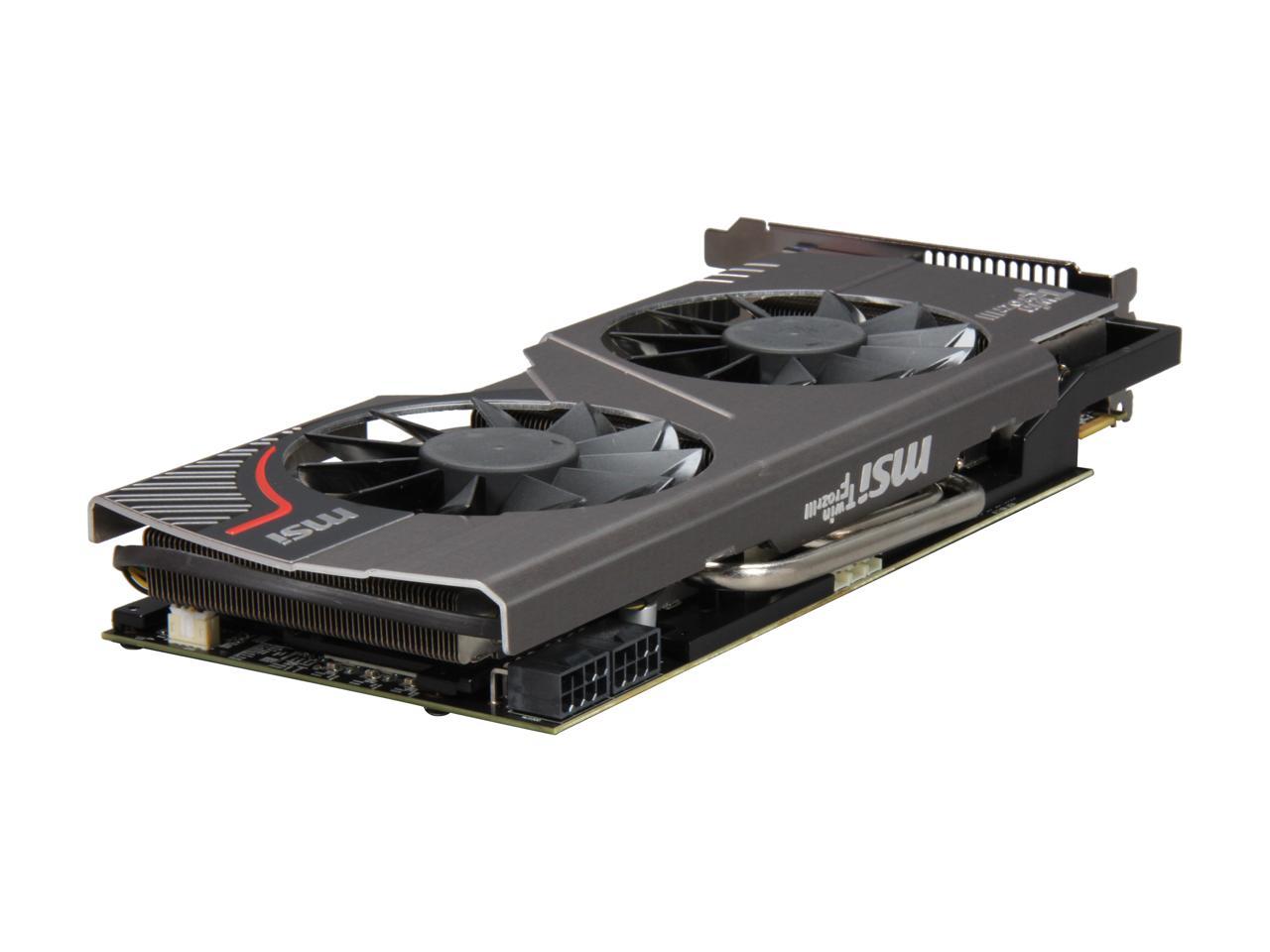 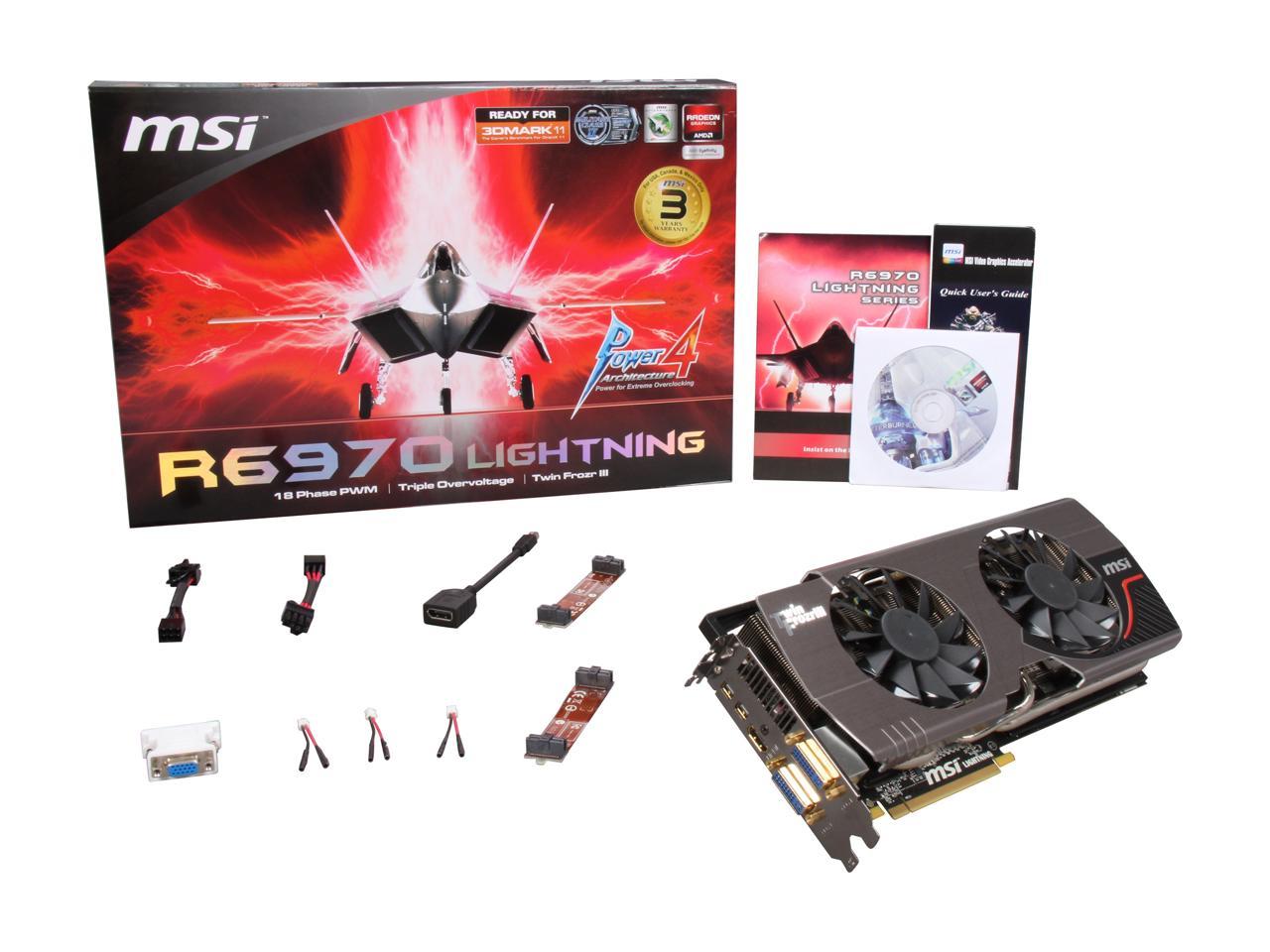 (101) Write a Review
OUT OF STOCK.
Fees for brokerage and duty included in price.
Overview
Specs
Reviews
The new member of MSI Lightning Series family, the R6970 Lightning is tailor-made for extreme overclocking. MSI introduces the unique Power4 Architecture to provide the most powerful and stable power for the R6970 Lightning, thus leading to significantly increased overclocking potential. The R6970 Lightning is also rich in exclusive features, including the new Twin Frozr III dual-fan cooling with innovative Propeller Blade technology, Triple Overvoltage through MSI’s Afterburner software and top-quality Military Class II components. MSI R6970 Lightning is designed to offer the ultimate in overclocking capabilities and is the superior choice for overclocking enthusiasts seeking to set new world records!

Pros: The more I use this card the more I like it. Before I write anything else, I want to clear up two typos from my last post. My OC settings were 1.284V and the memory was 1400, not 1.184V and 1500. Now, on to the wonderful technology that accopanies this card. First off, Catalyst Control Center allows you to enable Edge-Detect in the Anti-Aliasing section of the control panel. What's so wonderful about this? Typically, any AA setting above 8x incurs a HUGE performance decrease with minimal improvements to image quality. With Edge-Detect enabled, 4x and 8x AA modes turn into 12x and 24x AA without consuming memory. I've tested these settings on The Witcher 2 on max settings with ubersamping enabled. When using Edge-Detect, the options to use application settings or enhance application settings offer extra quality without a drop in FPS. In some games, forcing AA settings will leave your screen looking like you're staring into the sun. Maybe a future driver update will fix this?

Cons: None, so... Pros (continued): Morphological filtering is another amazing piece of technology that comes with this card and can be enabled in the same place as Edge-Detect. What does it do? Remember playing games like GTA4 without AA settings? Morphological filtering is a post-processing filter that adds AA to the image after the rendering process. What does that mean? Basically, no performance penalty for adding AA to games without AA! The option does not enhance other AA settings and seems to be nonfunctional in games with AA enabled, although it CAN be enabled without interferring with AA settings. So what should you do? Turn it on and leave it on! Games without AA have AA and does not affect games with AA turned on. This option can also be used on games too demanding to run in decent FPS; turn off AA in game and watch your FPS increase! As for image quality, Morphological filtering is not as "pretty" when compared to AA settings or AA with Edge-Detect.

Overall Review: Basically, I would recommend setting your AA mode to "use application settings" and turn both Edge-Detect and Morphological filtering on. This way you won't have to play around in CCC and tweak your settings for every game you play. If you want 8x + AA in game, turn application settings to whatever AA you want (Edge-Detect does NOT work with 2x AA, but 4x AA = 12x with Edge-Detect and 8x AA = 24x AA with Edge-Detect). If you want more performance from your game due to low FPS without sacrificing AA quality, turn AA off and let Morphological filtering take over! Amazing card. Another update for the overclockers out there, you should be able to hit 1010 core and 1445 memory with voltage set around 1.3V. All graphics cards are different, but it's a good limit to shoot for and let's you know just how far this card can be pushed.

Cons: Flipping huge. Won't fit in my full-sized Rosewill ATX box. Too thick and too long. If it was 3/4 of an inch shorter everything would be fine. I'm actually really bummed. I was looking forward to using this. Maybe this is a good thing though, between the time I bought it and writing this review it has been discontinued.

Overall Review: I never even got it in the PCIe slot so it shouldn't have any eggs at all. I don't actually know how great or terrible it is, but I had to give it something. I suppose I should have been more careful about dimensions. I def. underestimated.

Cons: - LEDs are very bright and can not be turned off, if you have side panel window in your case prepare for blinding green light. - Few times mentioned performance/quiet switch is not documented - If you use 2 cards in cross fire, two cards produce incredible amounts of heat on each other that will easily push both of them to 100C forcing fans to speeds that will make your system sound like a jet fighter - Card is so heavy that it will bend the board, according to forums that might be reason behind some of the heat issues by breaking the contact in some spots of the heat sink

Overall Review: MSI has terrible customer support I had to RMA one of the cards and have been trying for 3 weeks now to talk to any of their reps with no luck. Its nice that they show presence here but the phone number provider is just totally ignored. "all agents busy" the second their department is open than sends you to voice mail that never gets responded to (left 5 of them) If customer support is important to you, just call them to see if your call will be ever answered.

Pros: - Plays what ever game you throw at it well - It fit in my Mid-tower amazingly - Extremely tweakable

Cons: -The Cooler I think I received a bad card, when playing games the temperature of the GPU sky rockets to over 90C. It's not a case ventilation issue, I have tried adding a fan, taking my whole side panel off and then placing a room fan to blow right into the case and it still heats up into the 80C range. The fans run at a constant 100% at that point too, so it sounds like an airplane is taking off in my room.

Overall Review: I'm not even stressing the card, playing games on Medium Graphical settings causes this, so far I don't see how all these reviewers have 100% load stress tested this card and had it stay under 70C. It does this in any game I play, GTA IV, Arma II, Shift 2, L4D2, Killing Floor, Boarderlands, ect.

Manufacturer Response:
Dear Valued MSI Customer, We would like to apologize for the issue you have experienced with this particular VGA. Please email me directly via usersupport2@msicomputer.com your VGA's serial number and your complete contact information, subject heading "EAHR6970". I would like to help you get this resolved. Best Regards, User Support MSI Product Support
Hugo S.
Ownership: 1 week to 1 month
Verified Owner
Great upgrade4/24/2011 2:03:47 PM

Cons: - Huge PCB - Needs lots of power (two 6-to-8 pin adapters included) - Price, but worth the investment - Box and anti-static bag seemed to have been opened before (fingerprints, carton ripped, bag crumpled), but protective plastic film on cooler was still in place and card itself seemed untouched

Overall Review: Upgraded a Q6600 (@3.01 Ghz) system with Asus ATI EAH4870 to this R6970. Initially bought an Asus 560 GTX Ti but while it was very fast in 3D, I RMA'ed to Newegg because 2D and 3D image and video quality was significantly decreased compared to EAH4870. This may have been due to my NEC P221W S-PVA screen which uses a 10 bit look-up table (LUT) which is apparently not supported by GeForce cards. The Asus EAH6970 had been out of stock for a while so decided to give MSI a try, which has a lower profile than the EAH6970 and is also clocked higher. 2D image and video quality of this R6970 is excellent and similar to the EAH4870, 3D image quality and speed is noticeably better even in older games like Crysis, Farcry2 and UT99GOTY at 1680x1050. Overall this is a mature quality product and worthy upgrade even for an older PGA775 based system. The next upgrade will be Q6600 to Q9550 or Q9650 CPU and I will consider MSI products in the future again.

Pros: Fairly quiet fans. Although they don't exhaust out of the case...

Cons: Extremely poor customer support! I have sent this card in four times now! Each time previous they sent me a non-working card. This one finally worked (for about two weeks) now the temperature sensor is on the fritz. It rapidly moves from over 100 C to around 80 C even as the GPU load is pegged at 99%.

Overall Review: MSI has not offered to ship a card in advance in order to save downtime. And they will not send me a brand new card after all this frustration. They did finally start paying shipping both ways at least, but that is about all I can say for them. I have not had a working card for about six months now. I would be satisfied if they would give me a refund or a new card (since their quality control is obviously extremely poor). I wish I could go back in time and buy a different brand, you think support would be better when you spend ~$700 with a company. Lame!

Cons: Exhaust hot air inside your case! I run this 24/7 at full bore and it heats up my motherboard from 37C to 50C.

Overall Review: The card is very long at around 13inches. I removed the hard drive bay in my mid-tower case to make it work. I believe most of the 6970's are pretty long as I have a eight 6970 Sapphires that are 12 inches. The card came with quite a few extra connectors and other stuff, but not really useful to most people. I would only recommend the card to people who need the power for an hour or two -- outside of that it just isn't worth the increased system heat.

Cons: This video card, under diagnostic, after 6 months, reported hardware failure. Could no longer play games on it. Still ran my three monitors and allowed me to do work though.

Overall Review: Card by now, after 9 months, is completely dead. Gave it to my father for his new build (he doesn't game), and it came to life (fans spinning), but no video displayed. I'm buying 2 sapphire cards this week for Crossfire to replace my nVidia card (I prefer the Eyefinity display setup).

Manufacturer Response:
Dear Valued Customer, We apologize for the issues that you are having with this product. Please kindly visit the URL below to set up a RMA with the following information. http://service.msicomputer.com/msi_user/rma_form_new.aspx 1. Full name (first, and last) 2. Telephone # 3. Physical address 4. Email address 5. Serial number (located on the box, or the back of VGA card, eg 602-xxxx-xxxBxxxxxxxxxx) 6. Symptoms you are having onto the Special Remark section (as detailed as possible) Once your information and warranty coverage are verified then we can proceed with this RMA for you. Our turn-around time is typically about 2 weeks and our system will notify you automatically at every stage of your RMA process. If you have any questions or concerns regarding the product, please do not hesitate to contact us directly at usreview@msi.com and we will be more than happy to assist you. Best Regards, MSI Review Team | usreview@msi.com