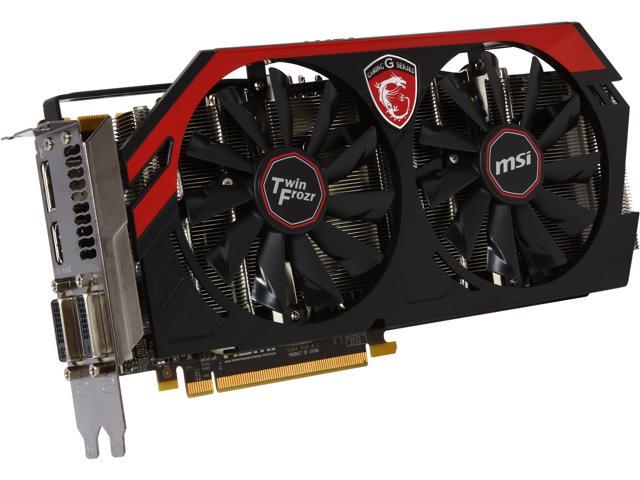 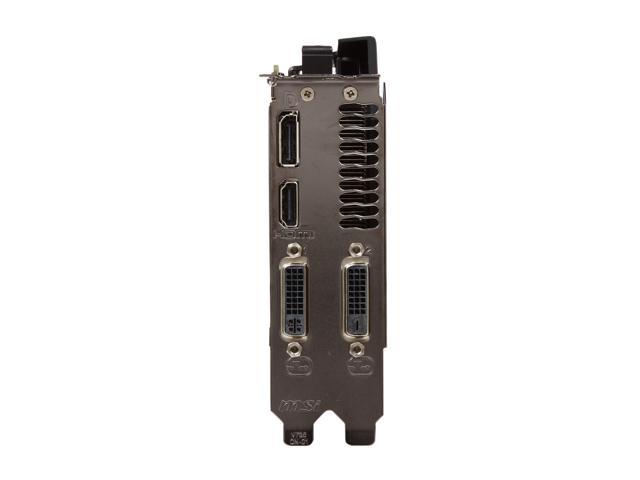 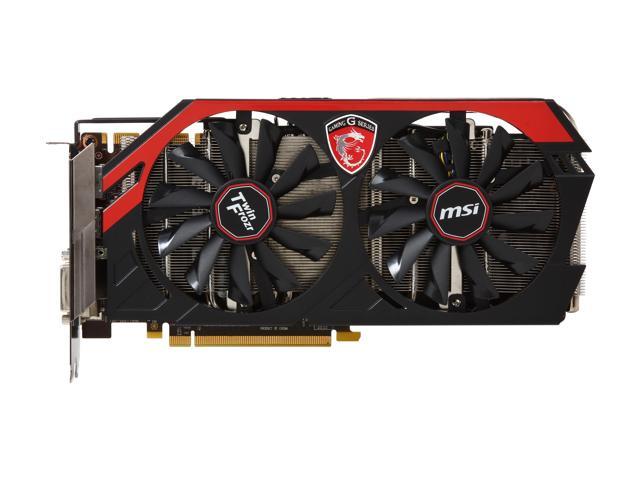 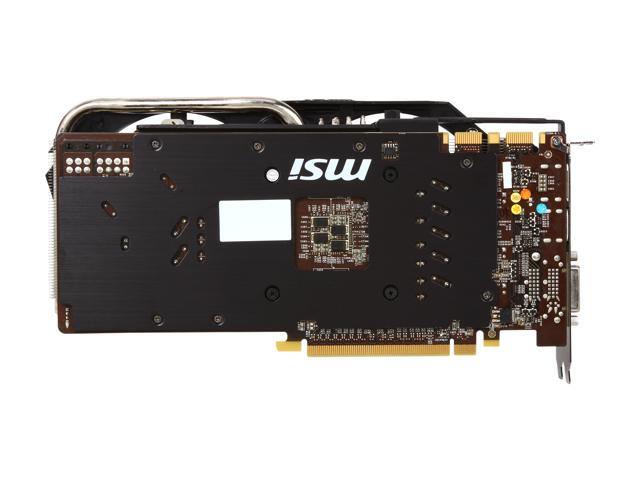 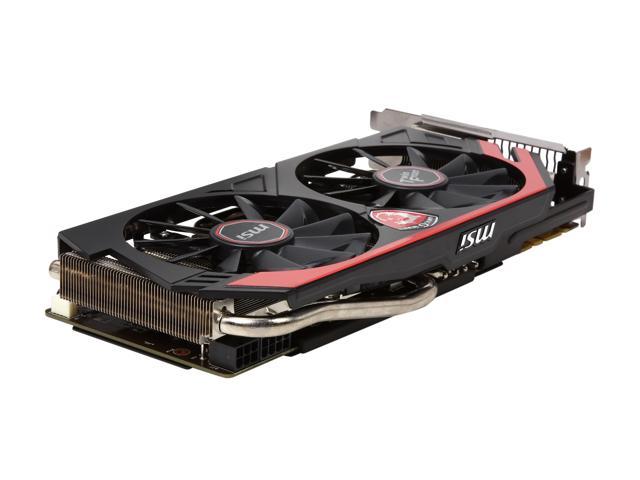 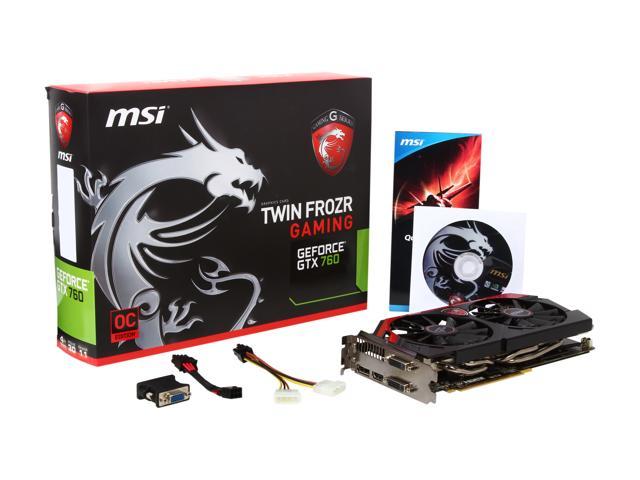 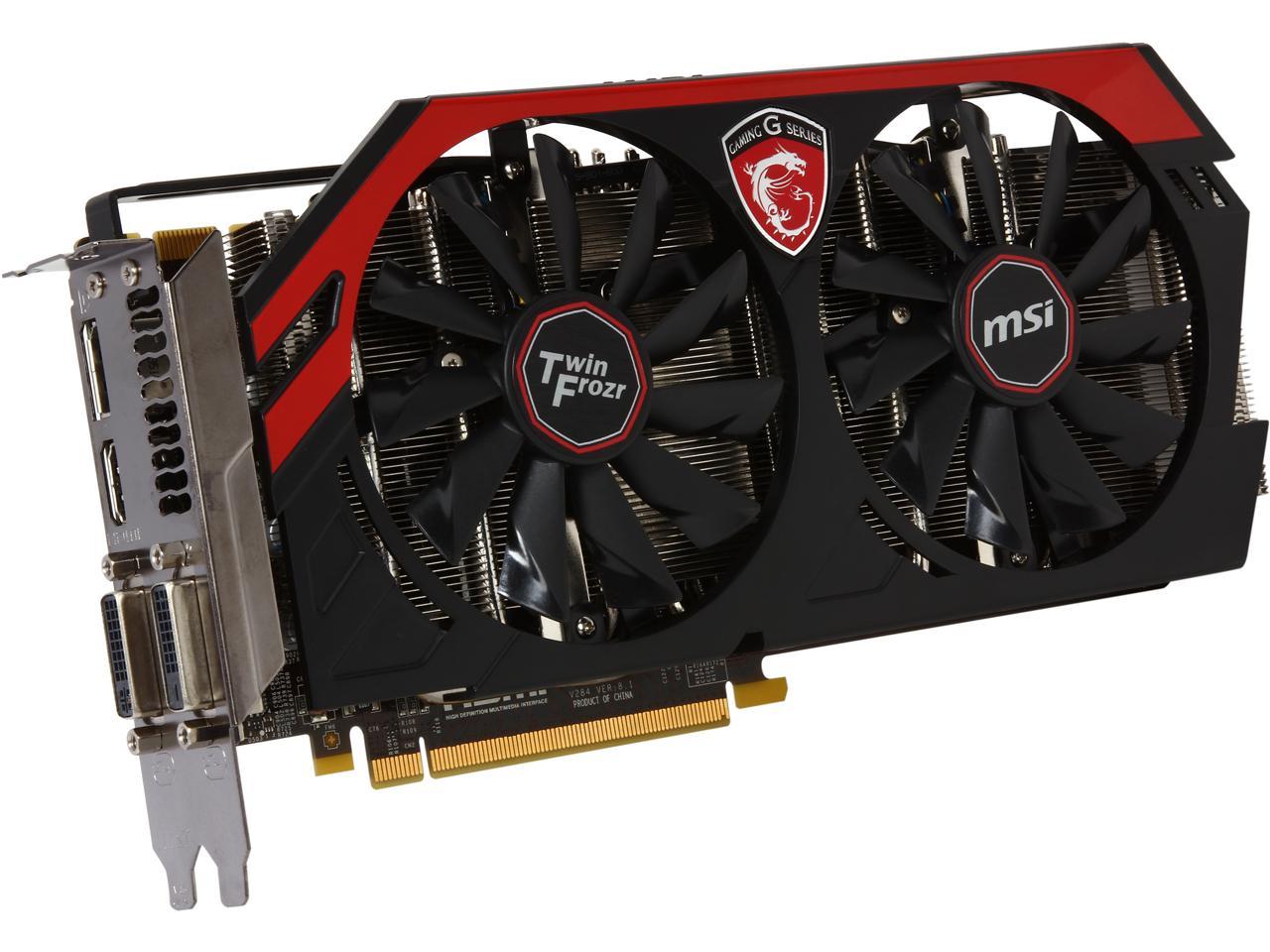 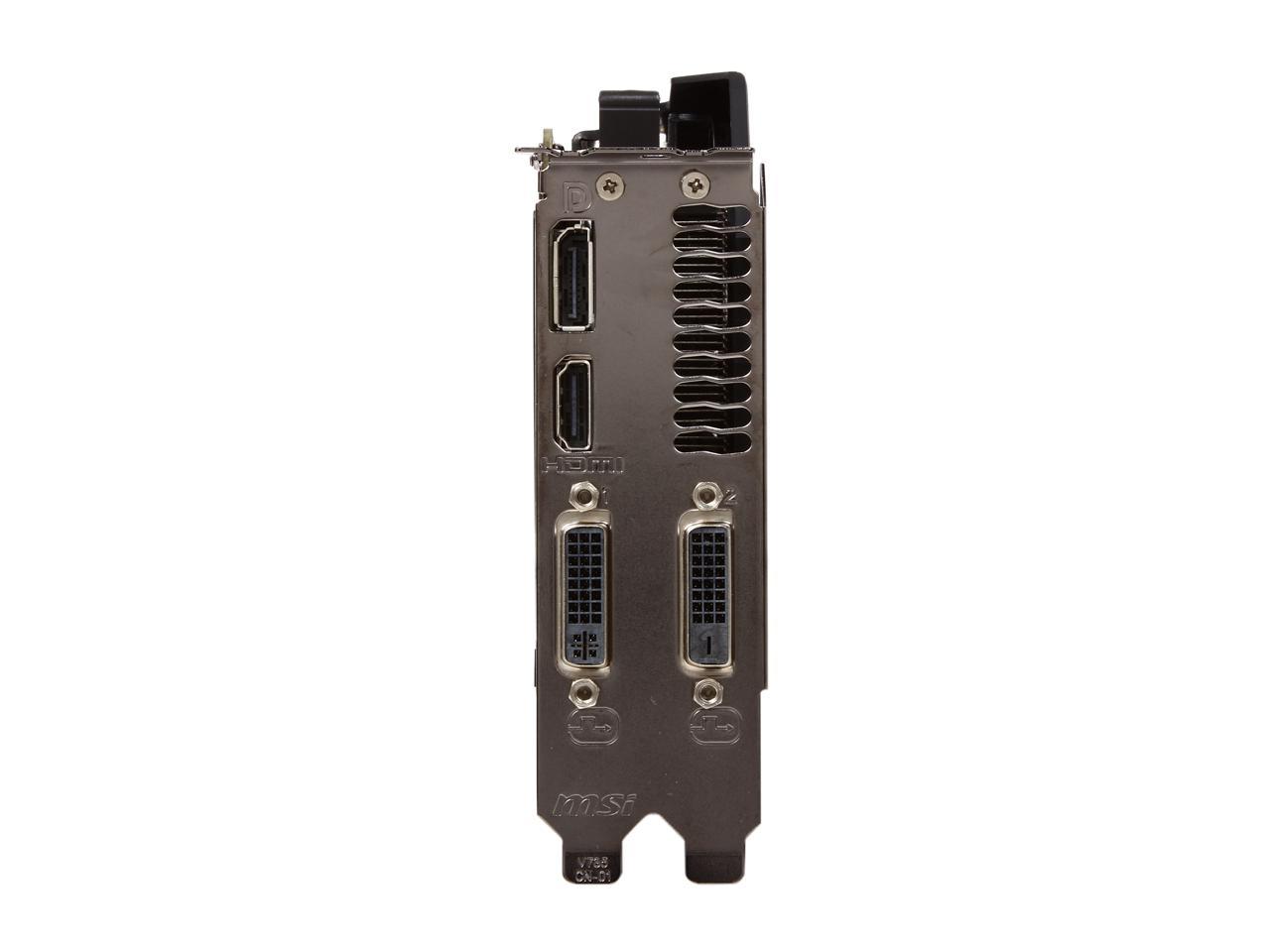 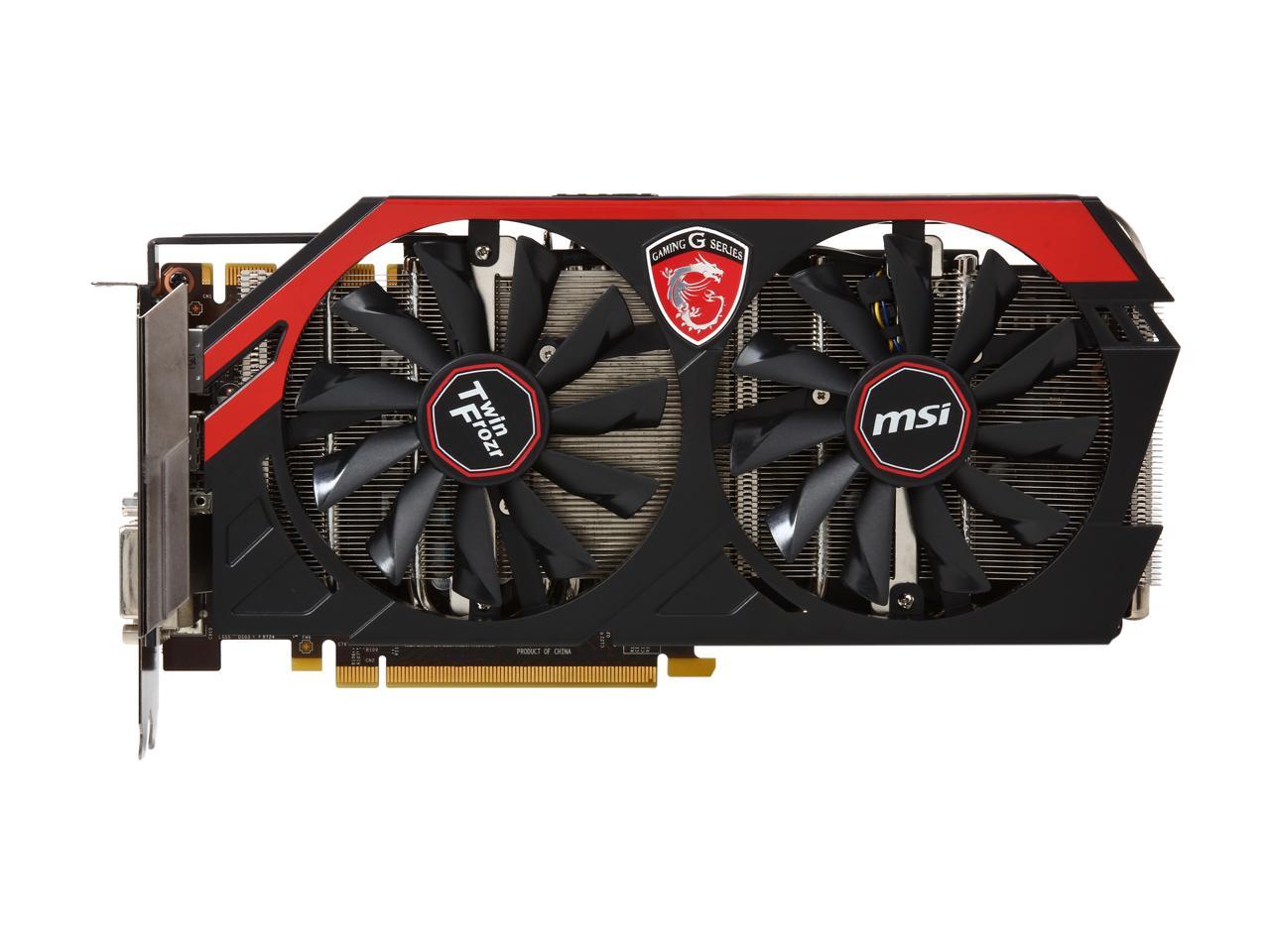 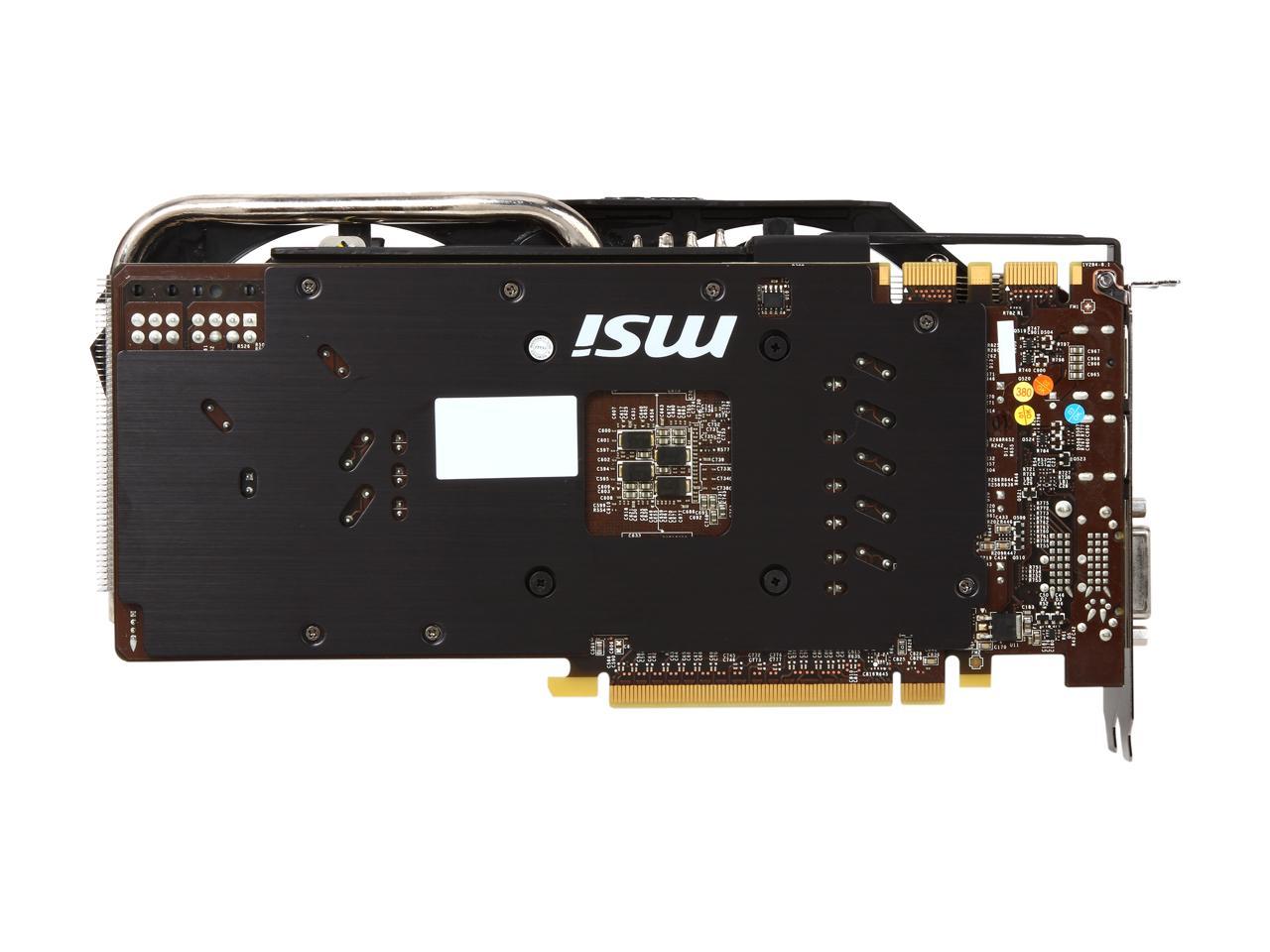 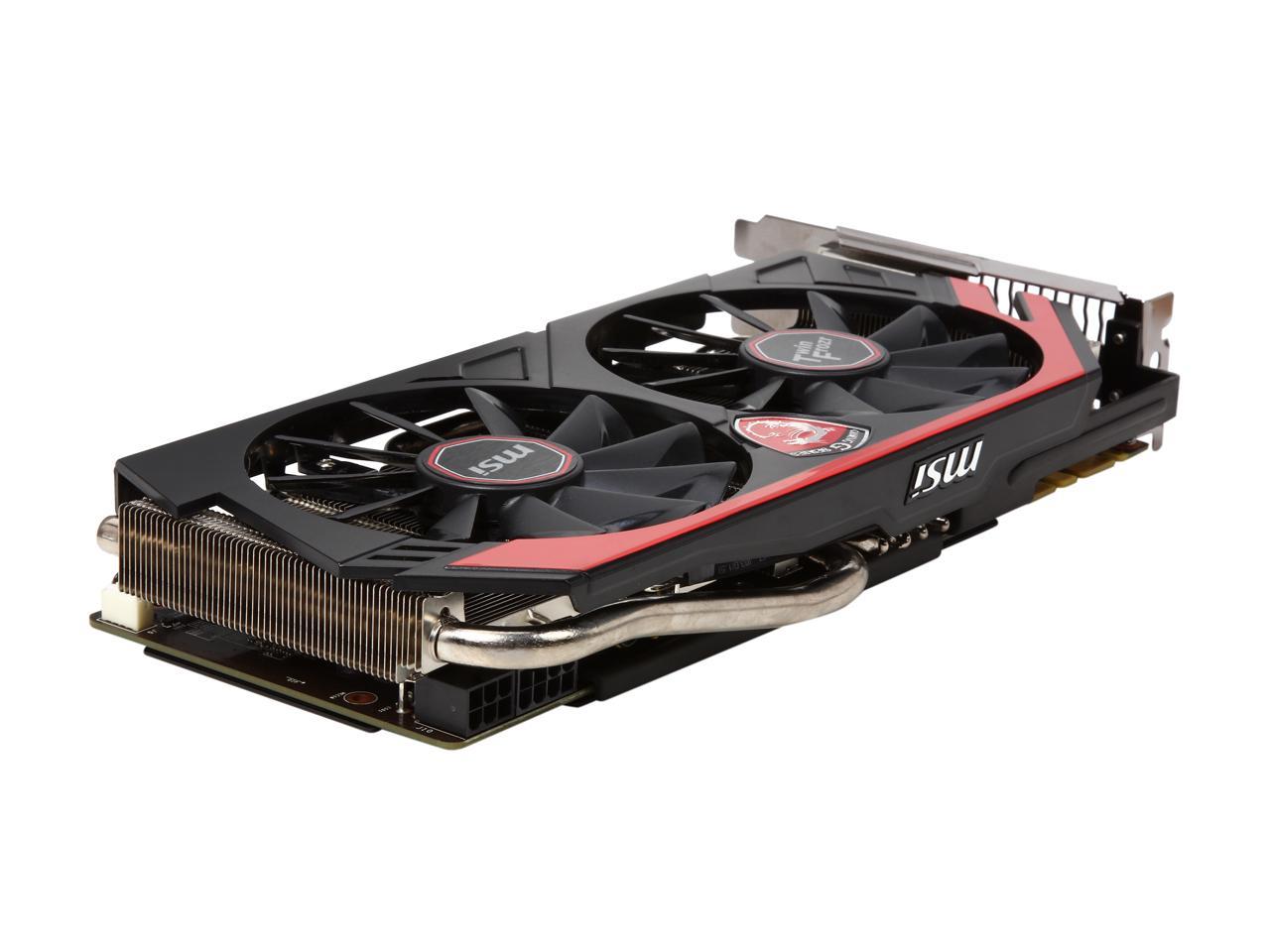 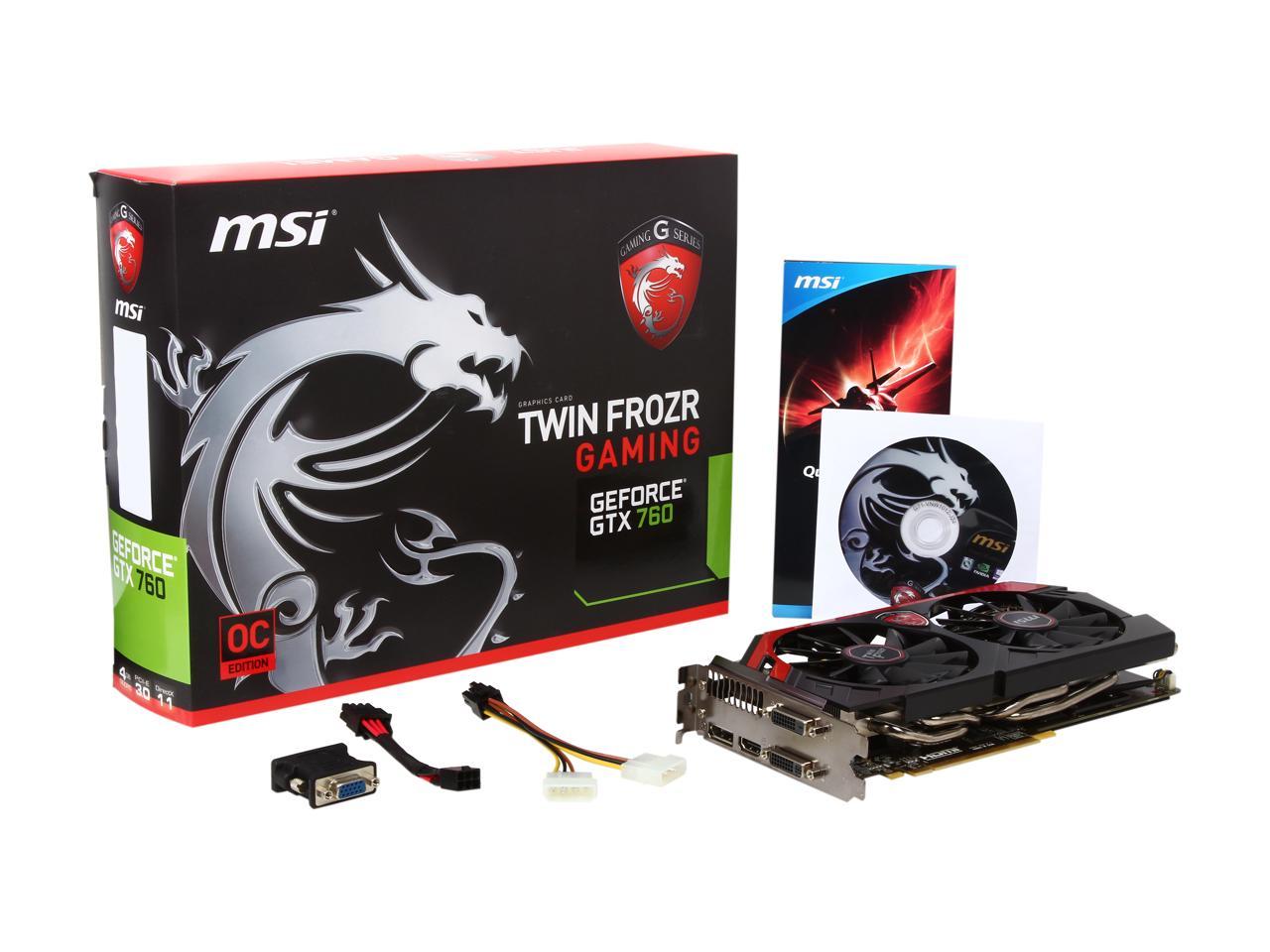 (79) Write a Review
OUT OF STOCK.
Fees for brokerage and duty included in price.
Overview
Specs
Reviews Serious gaming requires serious graphics cards. A graphics card is the single most important element for more FPS. As gamers, you understand that not just any graphics card "will do." The MSI Gaming N760 graphics card comes with performance but not the heat or noise, making it your weapon of choice for domination. It's based on the proven 28nm Kepler architecture and built with 1152 CUDA Cores with gigantic 4GB GDDR5 memory, giving the capability you need to game at Full HD.

You can switch this card OC Mode with the Gaming APP to tune up the frequency to Base Clock 1085MHz and Boost Clock 1150MHz for smoother gameplay. An array of latest GTX gaming technology, such as GPU BOOST 2.0, NVIDIA Adaptive V-Sync, NVIDIA 3D Vision Surround, and NVIDIA PhysX, offers you more than one way to elevate your gaming experience. Now You're Gaming With MSI
A graphics card is the single most important element for more FPS. As gamers, we understand that not just any graphics card "will do." That's why we bring you the best of the best. We don't want to bug you with noise and heat, but we do want to give you more performance. With MSI GAMING series graphics cards you get just that. Experience - Predator Share for Fun
A built-in screen and video capturing tool named Predator which captures your screen as still images or videos with the push of a button and allows you to capture and record your coolest, goofiest and most awesome gaming moments on your PC! MSI's Twin Frozr has been the industry defining graphics card cooler. The first Twin Frozr kicked off the dual-fan trend and today MSI stays true to its dual-fan, dual-slot design where others have to resort to less effective means.

The other part that the Twin Frozr cooler uses is a large Aluminum fin grid array that provides a huge amount of surface area for cooling. Heat from the GPU is transferred to the fin grid array by virtue of heat pipes with MSI's special SuperPipe technology. SuperPipes transfer heat twice as fast as regular heat pipes enabling an MSI Gaming graphics card to stay cooler than the competition. 
One of the deciding factors in performance is the quality of the components used. That is why MSI only uses MIL-STD-810G certified components for its Gaming cards - only these components have proven to be able to withstand the torturous circumstances of extreme gaming and overclocking.


A Hi-c Cap is a very small, but super-efficient capacitor. Besides ensuring enough spacing around a CPU socket to install large coolers, it also allows for 93% energy efficiency. Thanks to Hi-c Cap's MSI mainboards are the most energy efficient in the market.


One With their aluminum core design, Solid CAP's have been a staple in high-end mainboard designs and provides lower Equivalent Series Resistance (ESR) as well as its over-10-year lifespan. MSI Afterburner has quickly become the favorite overclocking software for media, overclockers and end-users. Because of its simple interface, it's easy to learn, but it packs a lot of powerful features like an integrated benchmark utility called Kombustor that can check your system performance in benchmarking mode, or run as a stability test.


Don't speak English? No problem: MSI Afterburner is translated in many languages including Russian, Spanish, Chinese and Korean! Not satisfied with the looks? Just change to one of the many different skins or create one yourself with ease!


Now this utility is also available on portable platform. Download the MSI Afterburner App from Google Play or the Apple store and start overclocking wit on your smartphone or tablet.

What's in the Box Pros: Nice cards. Well built. Bought 2 for sli. went with the 4gb versions because i was concerned with vram over 3 hd monitors. Plus a lil more future proof. For those who care. 7.9 on both W.E.I. aero and gaming graphics. Performs better then Titan for Cheaper. Much quieter and cooler then my other setup see other.

Cons: One con is that it is making me leave a con.

Overall Review: Was not sure this would be a big enough leap from 2x5870's and a gtx460 for some hybrid physics action. But it is! Fire Strike Extreme. actually looked like a hole new test before and after. unigine heaven is now smooth as silk. Bioshock Infinite, Metro last light, Tombraider, Borderlands 2 cranked up across 3 monitors is very impressive! and pretty much impossible before. Will review again once i have had them longer. and more time time to play with other software and not just games. grand theft auto IV only uses 1500mb maxed out i think crisis 3 might use just over 2 gb maxed have not tried it yet. Will see how much vram i can populate with video editing and some design.

Pros: Ludicrous bang per buck. Under 60C while stress testing at 2560x1440. The MSI TwinFrozr has a neat self-clean system: its fans spin backwards during start up to get rid of dust! Great performance on all games and 4GB is definitely worth the extra $50! The cooling system feels extremely solid!

Overall Review: I've yet to push this baby. Waiting a few months to nab myself a 1440p monitor and really make use of its 4GB of VRAM. The 4GB really isn't worth it if you're running 1080p, I've yet to see a game use over 1.5GB at 1080p. But who knows? as the next gen of consoles come around, perhaps games might become more memory intense.

Pros: This card is a powerhouse. The 760 is a great card no matter what manufacturer you buy from, and since the 770s and 780s are out these 760s have dropped in price. While the 770s will give you "better" performance, the 760s pack more power per dollar and ultimately you wont see much difference between the two. While 4GB is a huge amount of VRAM and many people claim it will "go unused", I can tell you for a fact that modded Skyrim loves to dip into extra VRAM. This card will last you for a long time and will be able to tackle next-gen games that will undoubtedly require more and more VRAM.

Cons: None, this card is fantastic.

Overall Review: As many reviews here have mentioned, this card is HUGE. I have a CoolerMaster HAF 12 Mid size case, my prior GPU was a MSI GTX560. I knew the 760 would fit, but only just. There really is hardly any room. Not that this is an issue, as long as you have your wires organized it wont be a problem at all. Additionally, the power supply inputs are on the side of the card facing toward you, so its easy to install. The only other thing is that this card can get loud. Not ridiculous levels, but when you are playing a game or doing something that is making the card get warmed up it can get noticeably noisy. But again, its nothing that I would consider "too much" or something that would become a distraction.

Pros: i am not much for overclocking, but i paired this with a newer MSI mobo and everything so far has performed extremely well. no driver headaches or any of the other issues i've run into with video cards in the past. in the new build outlined in 'other thoughts' and without any OC-ing, i'm getting 40-60+ fps in Skyrim on 100% Ultra settings with a ton of mods. i've yet to try a game that won't run very comfortably with the graphics completely maxed out, including Far Cry 3, Crysis 1-2, Skyrim, Minecraft (modded), Just Cause 2, and a couple others i'm forgetting. this card paired with a decent CPU/PSU/MOBO will handle pretty much whatever you throw at it for now, and if you double up via SLI down the road or know your way around OC-ing properly, you should be good through most of the upcoming generation of PC games too.

Cons: none; the easiest video card i've worked with to date. no issues at all.

Pros: Fan noise is low. Cooling is awesome. (idle is at 39C and load is usually between 45C and 60C tops) Huge overhead for video ram being a 4gb card. I know most games don't yet need that much but they soon will want more. Applications and utilities that came with card. Free Batman game!

Overall Review: I upgraded from a gtx 470 sc card with 1280 gb ram. This card has if not produced 1.5 the framerate and performance but almost doubled in some instances. Nothing bad to say about it. My main quest for this card was low noise and low heat and it has satisfied both.

Pros: Very quiet. I can run Hitman 2 and Saints Row 3 on ultra settings with out hearing the fans on this card. Huge upgrade to my old Nvidia 460 card. Two of these in SLI can compete with a TITAN card at almost half the price. I have this paired with a Core i7 Haswell CPU. It has handled any game I can throw at it. It fits great in my SilverStone Fortress Series FT03 case.

Cons: I have to save up and buy another one to do SLI (Newegg made me type something here).

Overall Review: Wonderful card at an affordable price. You can't beat the 4GB of VRAM either for future proofing. If you need more performance, but another and do SLI for TITAN performance at almost half the price.

Pros: Awesome cards. Just added a 3rd for 3way SLI, and I seen a noticeable improvement in BF4. The ninja revision change (see cons) still seems to play nice with the old revision in SLI. Although I haven't tried it 2way sli, I'm sure 2way is also fine.

Overall Review: Tisk Tisk MSI.. Should have left it two 8 pin IMO. Gigabyte did a revision change w/ theirs and added a second 8 pin while you took it away. :(

Pros: -Extremely quiet even under load -Incredibly powerful (huge upgrade over 660s) -Insane efficiency in SLI -Anti-Dust tech on the Twin Frozr actually works -4GB gives you tons of headroom for mods -Included backplate makes card impressively rigid even with a heavy cooling solution. -MSI tuning and overclocking software is easy to use and very effective. It's safe to even let it auto-adjust.

Cons: -Red and Black clashes with my case motif...

Overall Review: I spent a lot of time figuring out what the best price/performance bang for my buck was going to be when updating my video cards. It's the 760. In SLI 760 demolishes even the Titan. Dropping between 500 and 600 dollars for two cards equaling this kind of power is jaw dropping. If you are on the fence, and don't think it can be as good as advertised, think again. It is that awesome. And after quite a bit of reading and watching, MSI wins at the cooling solution contest and software.