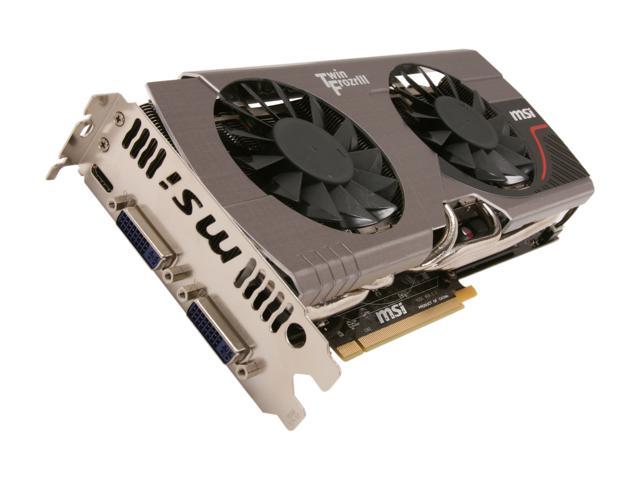 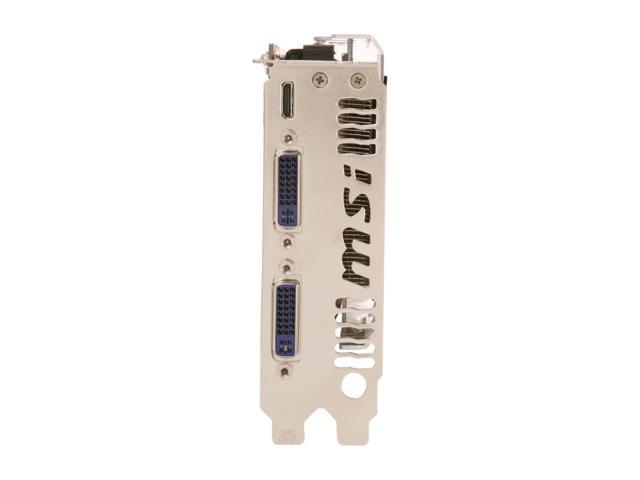 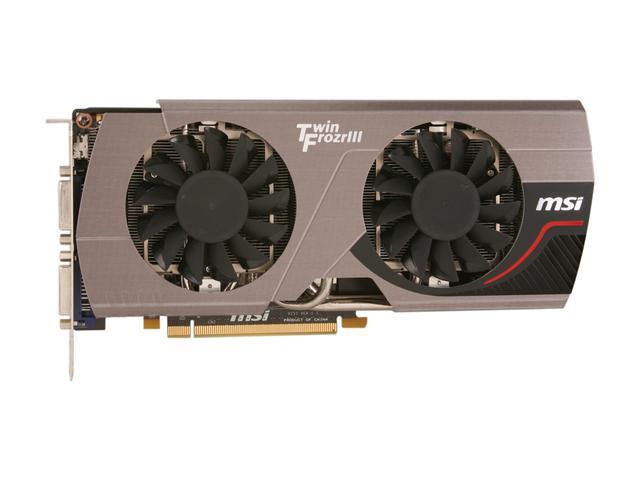 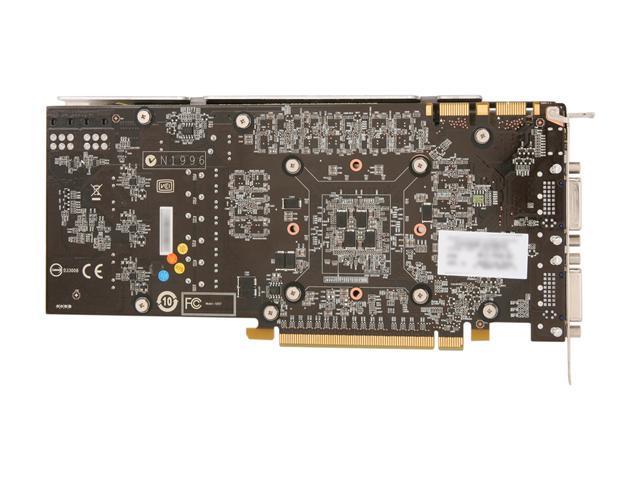 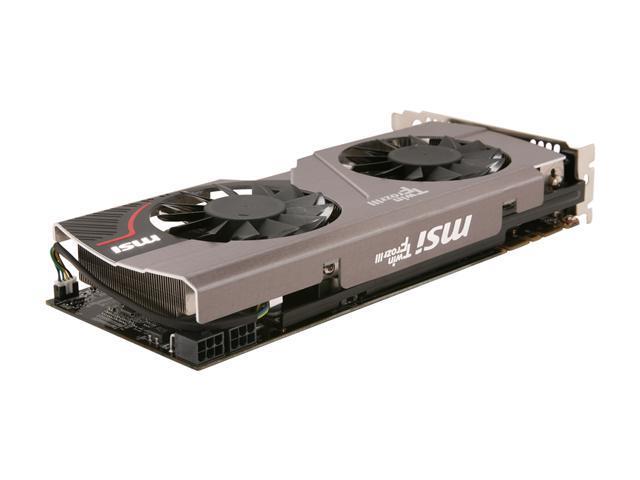 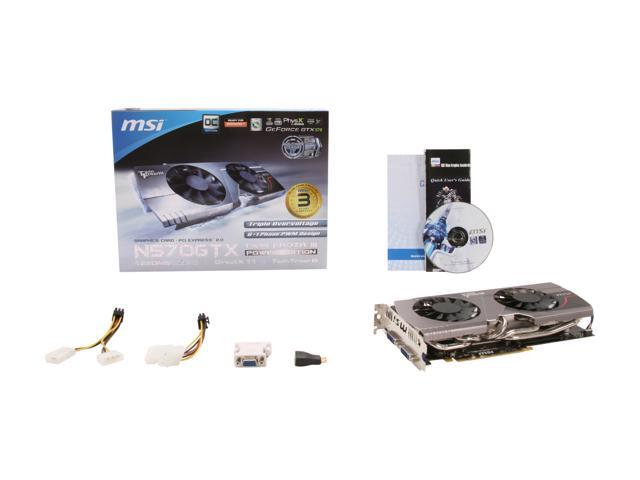 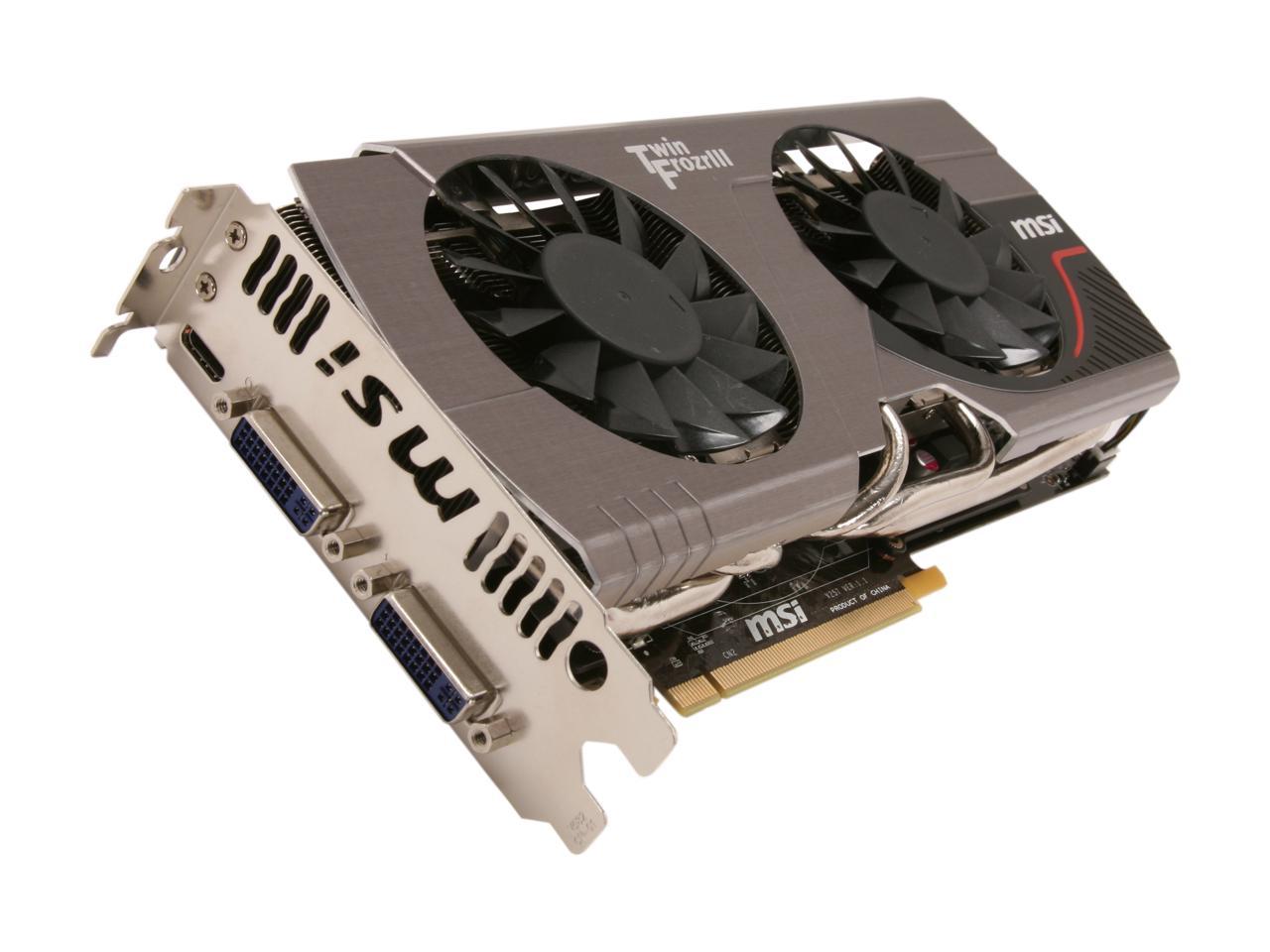 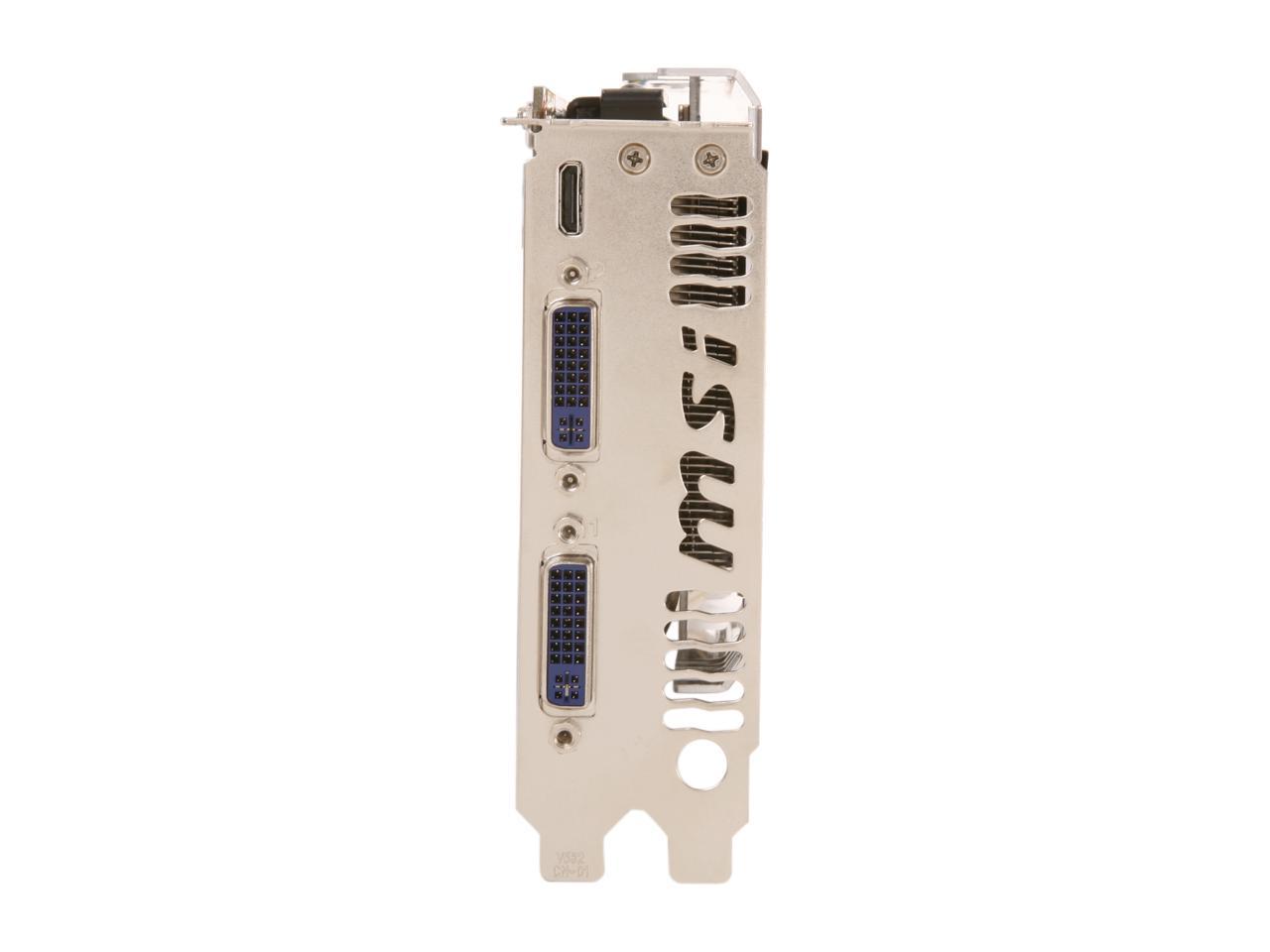 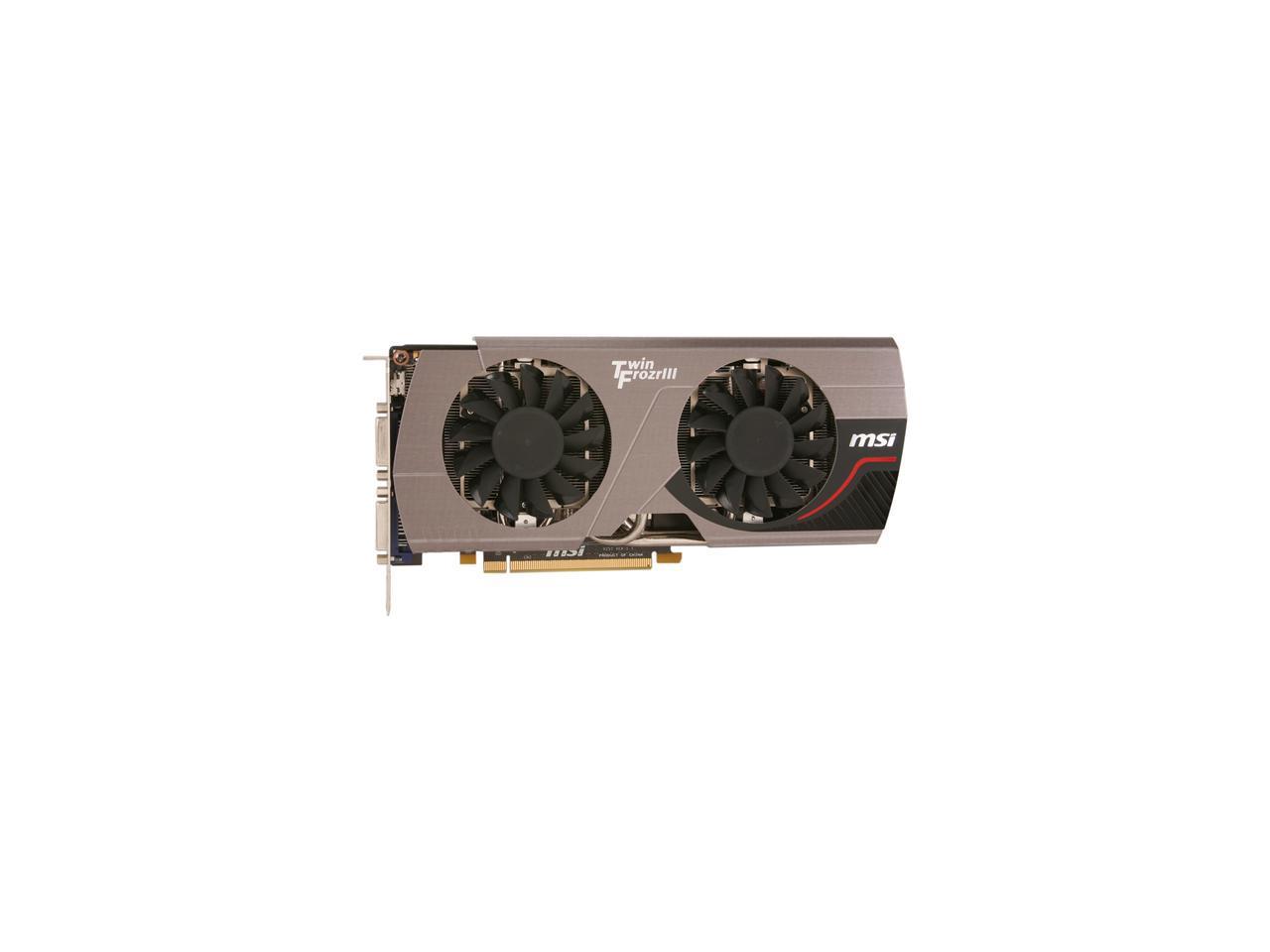 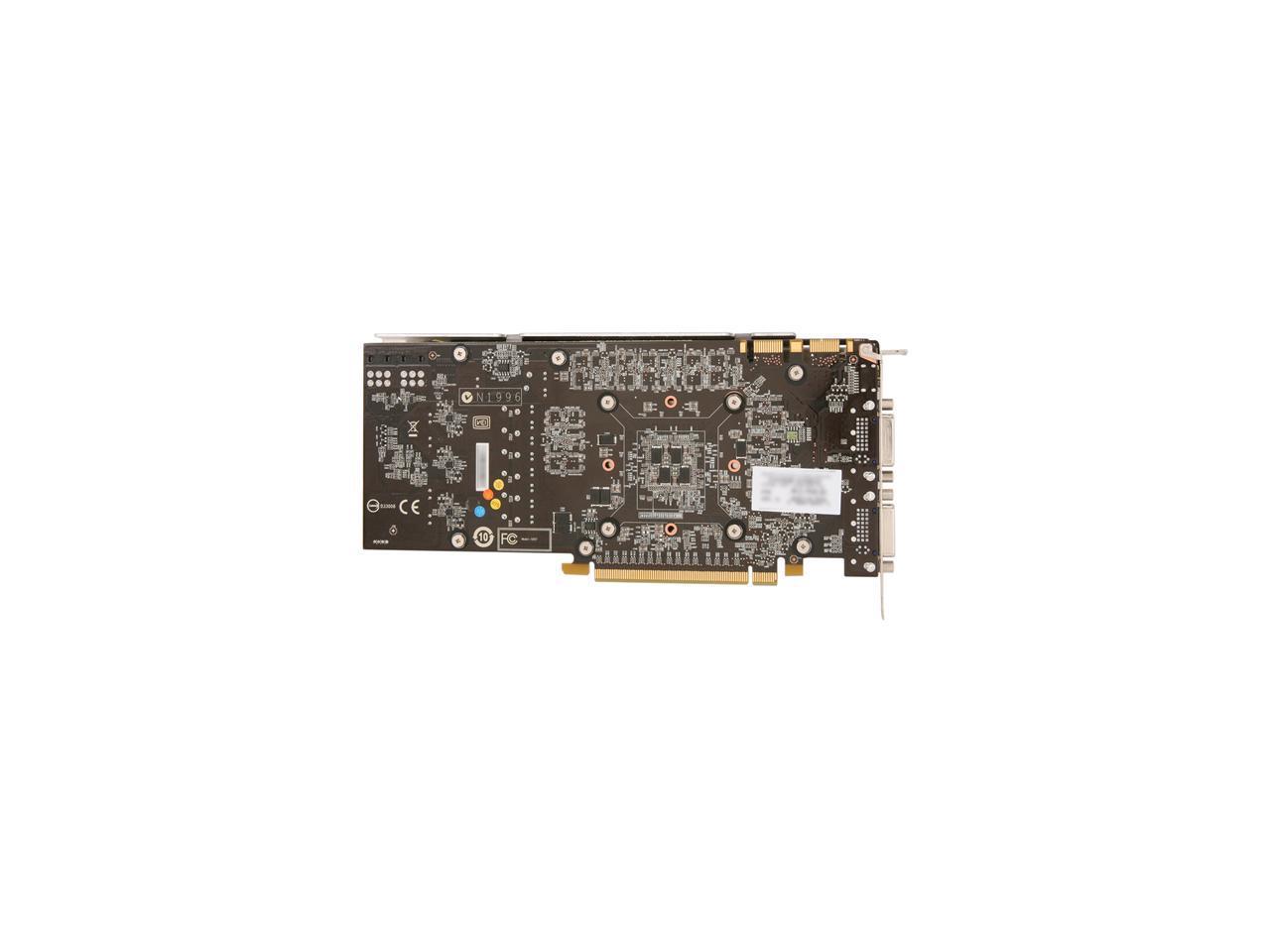 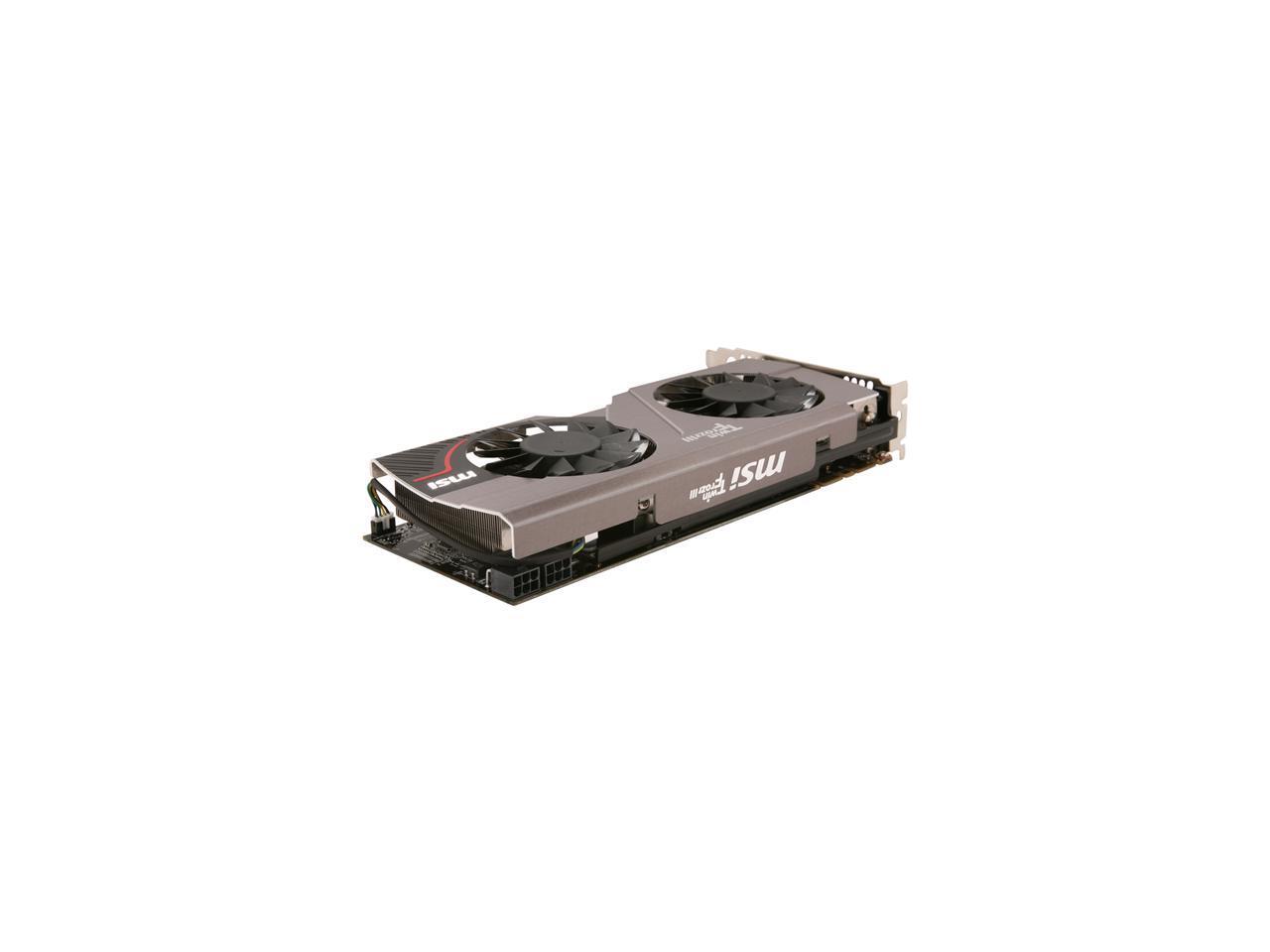 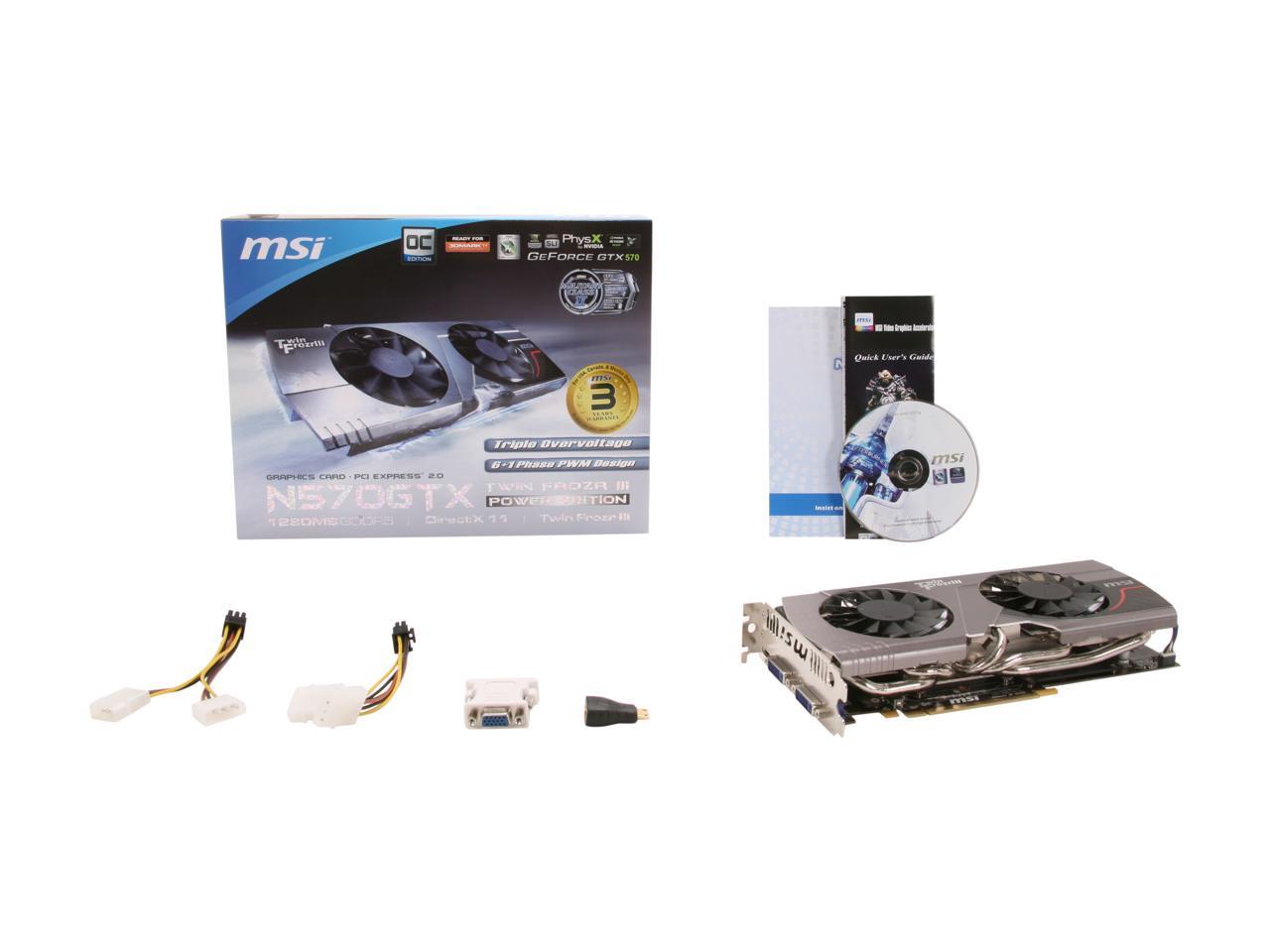 (118) Write a Review
OUT OF STOCK.
Fees for brokerage and duty included in price.
Overview
Specs
Reviews
MSI’s N570GTX Twin Frozr III Power Edition/OC graphics card is not only equipped with the latest Twin Frozr III dual fan cooler, it also incorporates MSI's exclusive Propeller Blade technology for 20% more airflow than conventional fan blade designs. The result is up to 18°C cooler and 7.7dB quieter than the reference thermal solution under full load. The popular PCB architecture from the R6950 Twin Frozr III Power Edition has been retained as well, with Triple Over-Voltage support and a 6+1 phase power delivery system that ensures overclocking potential and stability, increasing the overclocking potential by 22% compared with the reference card! By meeting PC gamers’ needs for increased cooling efficiency, improved overclocking potential, and constant stability, the N570GTX Twin Frozr III Power Edition/OC is undoubtedly the one of the best GTX 570 graphics cards available on the market today.

Cons: - When this fan is over 70%, there is a cyclical whirring noise that is much louder than the fan noise in general. It does not always happen, leading me to think the cooler is loose or faulty, but I never need the fan over 70% so I won't bother with RMA. - No Triple overvoltage support with the Official Afterburner yet, but if you can click a link you can have full support before the next final AB update.

Overall Review: Excellent Card. I bought it before it was officially announced and I am happy I took the plunge on this card! This might not be as quiet as the ASUS DCII, but it seems to overclock much better and only requires 2 slots. Plus it's quiet enough for me because it only requires 50% fan to stay under 70C. I was able to Overclock this card stable in everything at 930 mhz @ 1.1v and still only ever need 50% fan to stay under 70C. Highly recommend this card to anyone and the updated 6+1 power phase design is more resilient than the 4+2 of the reference 570's. Specifically I recommend this to overclockers, the excellent cooler, seemingly binned GPU's and official support to overvolt to 1.137v make this a no brainer.

Pros: Non-reference card is somewhat (0.5 to 1 inch) shorter than others, so it may work easier for those with older or smaller cases. In games played to date, temperatures were lower than advertised (peaking at 56 C.). This handily beat my old BFG 260 192sp OC, which often rose to 80 C. in games. Subjectively, during idle/gaming, airflow feels slightly greater than previous card with reference cooler. Cursory attempts to overclock were a success, although no true stress tests were run.

Overall Review: The character of the fan noise is the disturbing issue. The drone of a normal fan is fine, but the slight keening/whine can definitely annoy some. If you're the sort who is bothered by these, stay away from this card. (I find the noise somewhat annoying but acceptable, even though I'm the sort who can't sleep if an old CRT TV is on - the 15.7kHz flyback hum they generated grated on me. So, your mileage may vary.) No true stress tests (FurMark, OCCT, etc.) have been run. I'm somewhat uninterested in these tests, and the 570GTX drivers are said to "throttle down" the GPU when undergoing FurMark anyway. The redesign of the VRMs as well as the reduced temperatures should cause this card to last longer than early 570GTX cards, and if you do not overclock, you should also avoid solder flow issues. However, the card is relatively new and all designs may show issues later in life.

Pros: -fast out of the box -easy oc capabilities -quiet unless u jack the fans up -sexy looking card -easy install -drivers avail on disc or through website (online recommended)

Cons: -large (i have a big case but its a BIG card) -expensive but definitely worth it

Overall Review: upgraded from a gtx460 oc (put it into an old comp) and decided to get this. Im pushing 2 1080p monitors. play all games on max (sc2, wow, etc.) and this thing barely breaks a sweat. will probably be my gfx card for the next several years.

Pros: This card tears up everything i throw at it,it looks awesome,can overclock to 830/2000 without touching voltage.never goes above 62c

Cons: fan can get loud above 70% but havnt needed anything even close im 50% all the time

Overall Review: crysis 2 100+ fps max settings metro max directx 11 45fps very playable dead space 2 100+fps max settings im running all games max settings @ 1920x1200 with no issues ohhh and battlefield 2 100+fps no problem.u will like vsync it stays 60fps max which is better than xbox 360 and also helps your cpu from working to hard. this card is just awesome i got it for $319

Pros: This card was a compromise purchase thanks to the continuing shortage of the 600 series cards. My build was ill timed and I had to make a decision. Extensive reading convinced me that this card was the way to go, and I have no regrets. It's a slick card that keeps its cool and provides a fantastic graphic experience. It does a great job with Diablo III, and that's all I play on the computer. For regular surfing and day to day use, it screams.

Cons: I paid slightly over $300 during that horrible period when the nVidia 670 series (which was only $75 more) was sold out everywhere, so I think everyone was gouging during that period. Other than that, I've got no complaints.

Overall Review: If you can wait, hold out for the 670s. But if you can't or you don't have the extra money, this card will do the trick.

Pros: The card is fast. Some say it's loud, but that's only when you're gaming, not when it's idling. Also, you can control the fan curve with included software anyway (Afterburner). Using Afterburner you can also overclock this card, which was really the intent--and it overclocks very, very nicely. I'm able to hit 925/1850/2100 stable at +143mV core and +40 memory. Of course, OCing will be different for everyone, but if you do a Google search it seems that these numbers aren't uncommon. The card is rock-solid stable and hasn't given me any problems so far using the latest beta drivers from NVIDIA. CUDA/Compute performance is also impressive, with decode framerates for telecined material (should theoretically slow down GPU) nearly double software decoding (i7 2600K@4.4GHz). So, if you're the type of person that does video encoding and needs fast bilinear resizes and GPU-based denoise (fft3dgpu), this is great too.

Cons: Uh. Without using Afterburner, card gets loud when you're playing games? Also, at those speeds, it spews hot air everywhere and might mess up your air flow a little bit.

Overall Review: It's a really big card. Make sure you have room in your mobo for it. The stock fan speeds are really too crazy, my GPU hits 58C maximum on LOAD with the fan at minimum speed the entire time. I tested this for an 8 hour period and it never went past 58C. This may be because I have 7 case fans, but still it shows the strength of the card.

Cons: This is a heavy card, and it will droop a little. The fans also extend slightly past the chassis, and combined with the drooping will make contact with nearby cards in a tight spot. I had to drop an PCI card with extra USB ports because the fan was grinding against it very loudly (couldn't have been good for the card). I've got plenty of USB ports, though, so ditching the card below isn't a big loss, though if it was my wireless adapter i would probably have cried.

Overall Review: Your CPU may bottleneck this card. When I first installed the card, I was getting exactly the same FPS and bench scores as with my previous card, a GTX 460 Cyclone (also a great card). I discovered while replacing the stock CPU fan with a Zalman sink that the stock one wasn't making full contact, and CPU temps were bottlenecking the 560. I've been pushing some heavy clocks and icy temps on the CPU since, and stopped noticing GPU performance gain around 2 cores at 3.8 gHz

Pros: Instant gratification, ran dual 250's into the ground. This card is a night and day difference.

Cons: Little pricey. Got one less star because I couldn't OC the card very much with the MSI Afterburner software. Card wasn't stable much past the stock speed.

Overall Review: Love the card. Cant wait for the price to drop and buy it a brother.