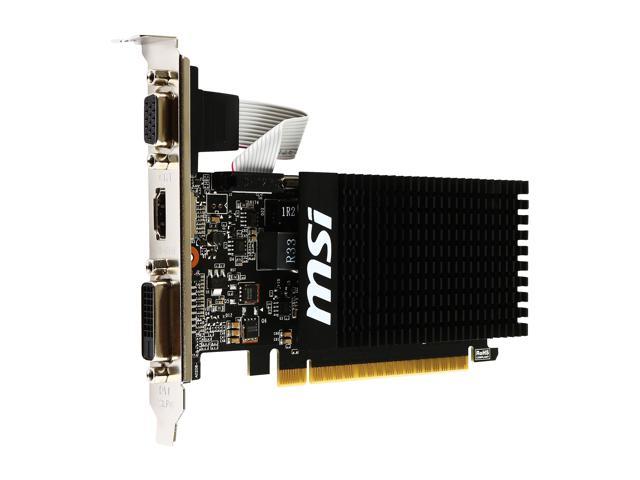 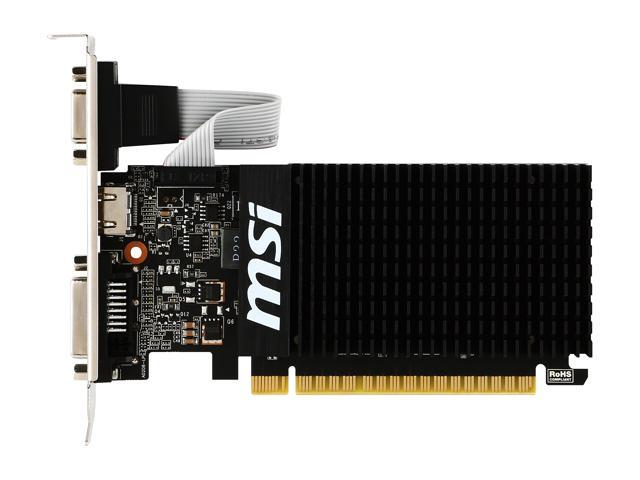 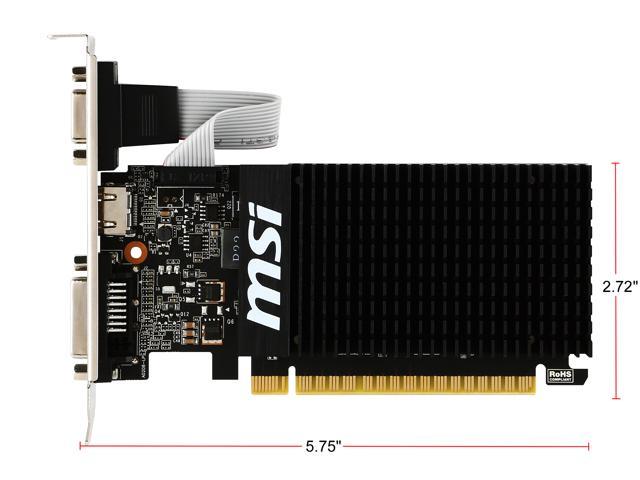 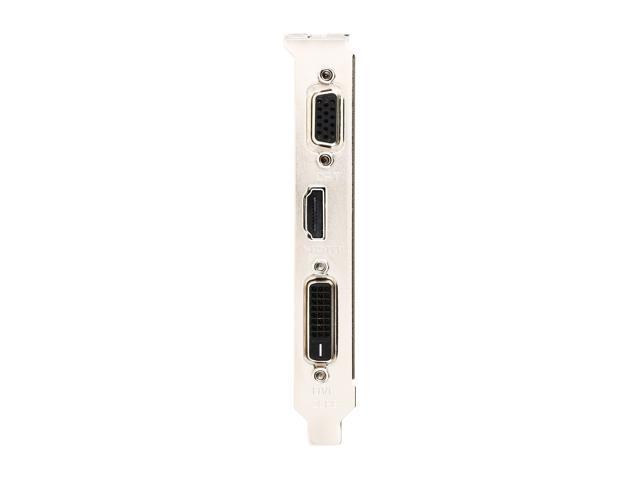 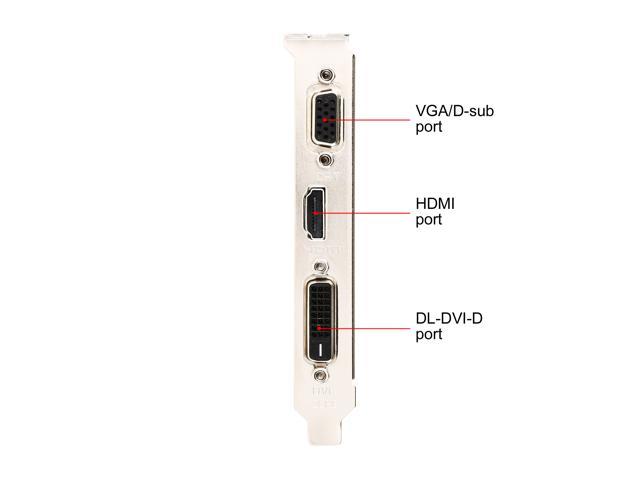 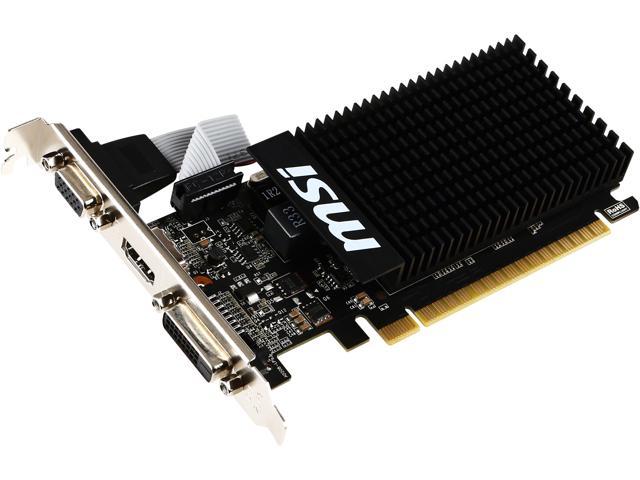 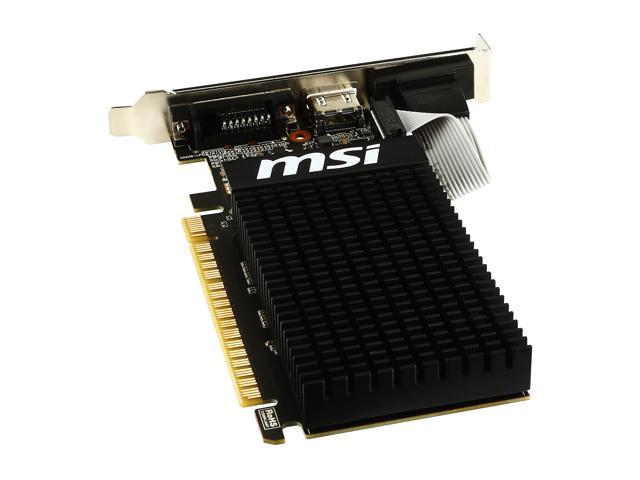 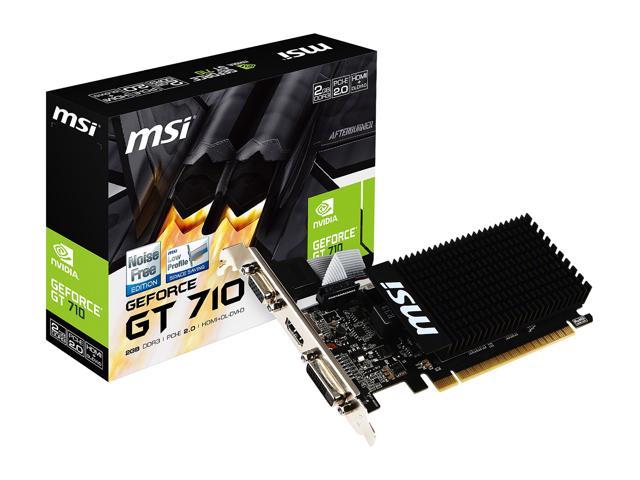 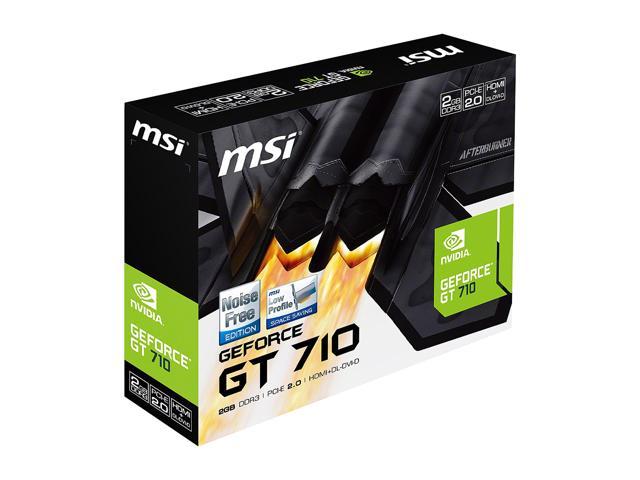 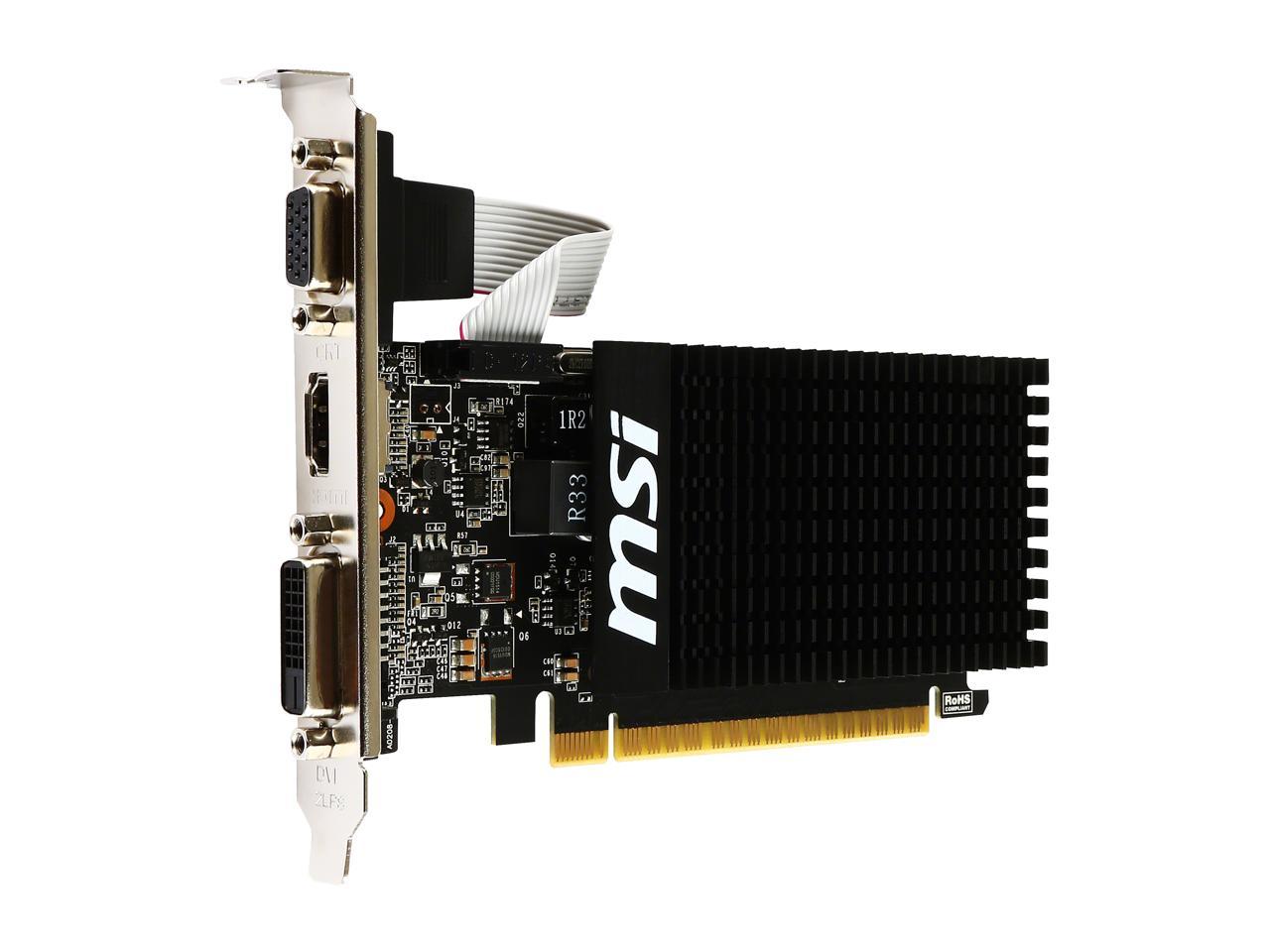 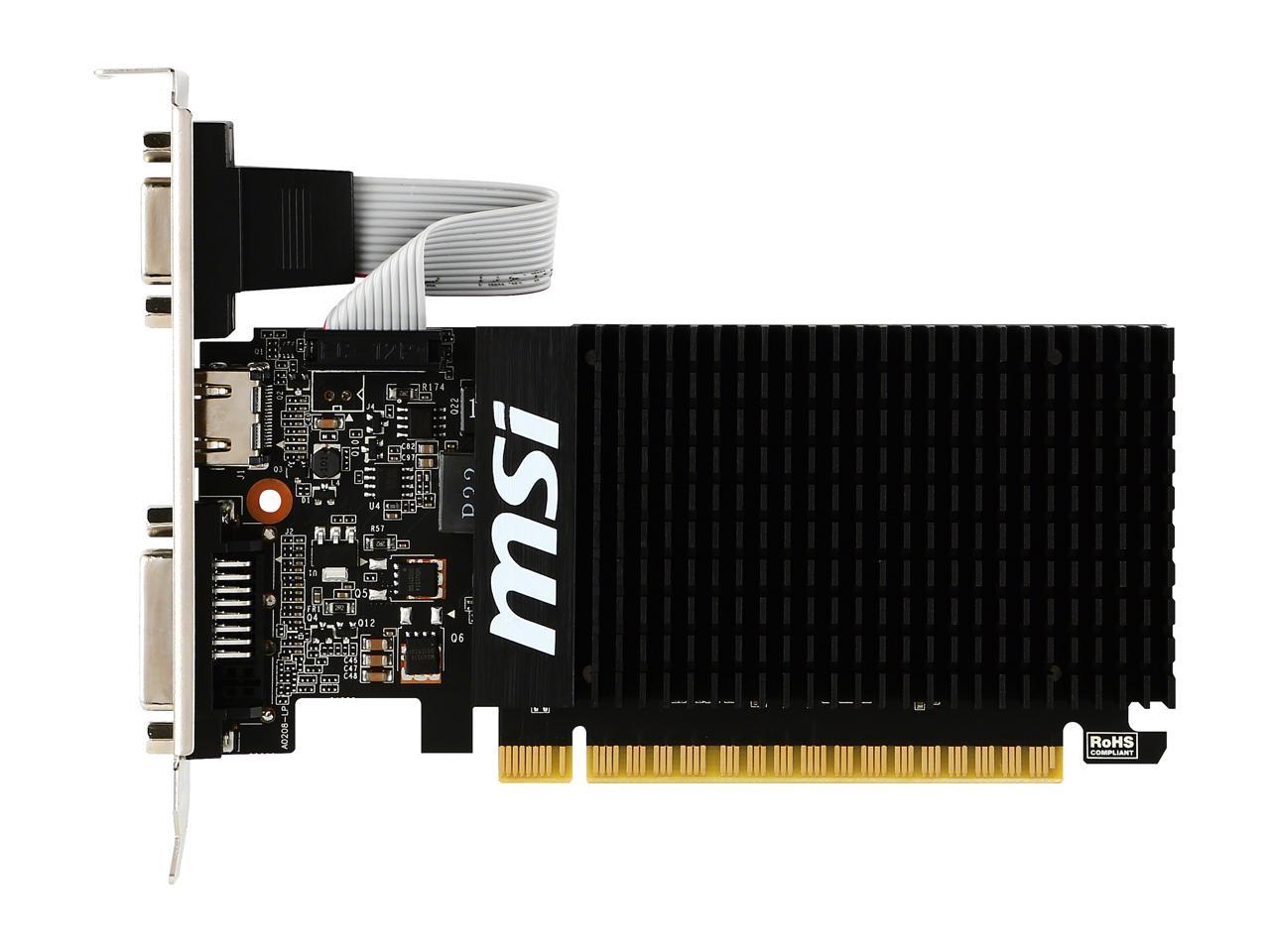 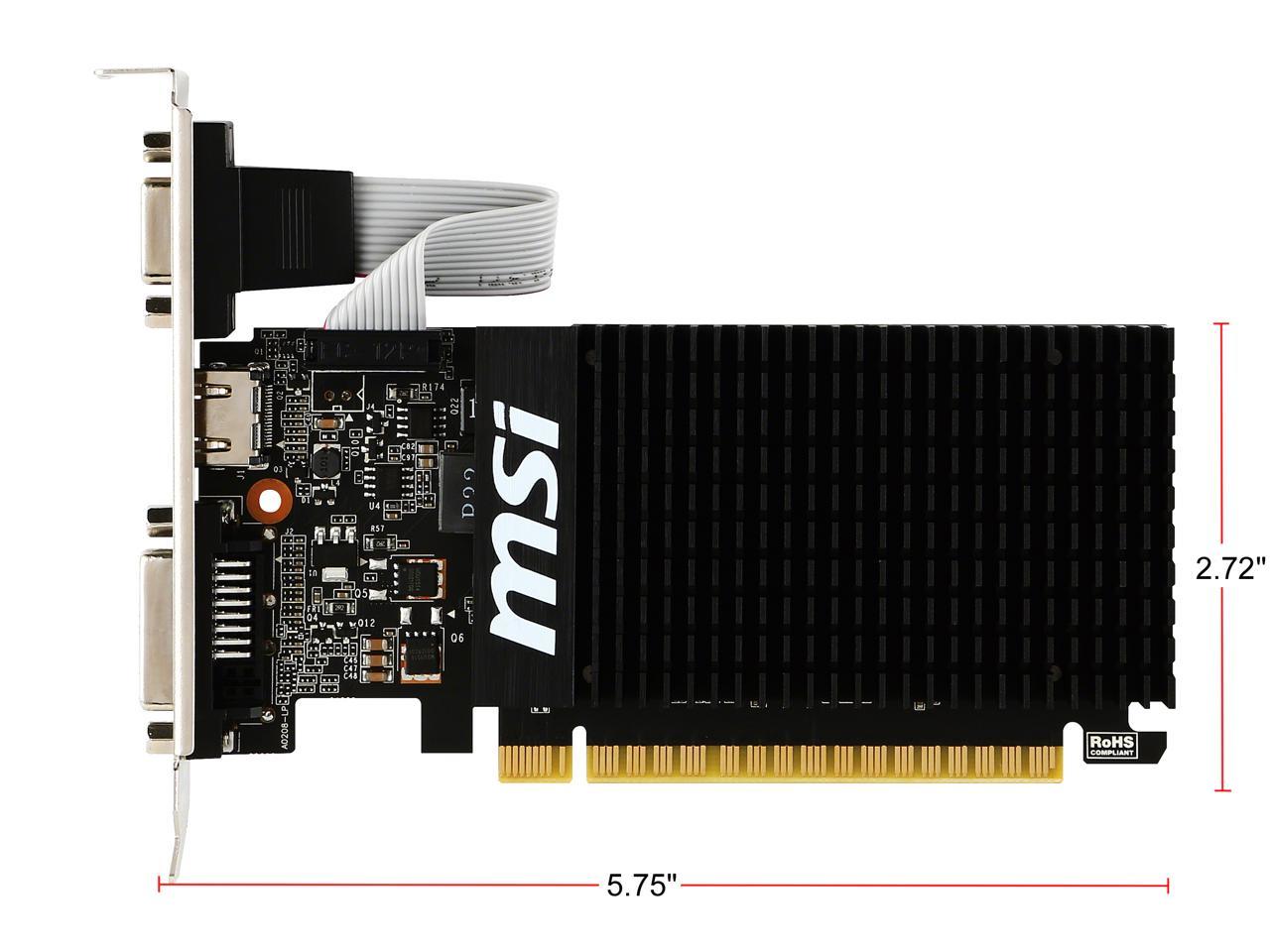 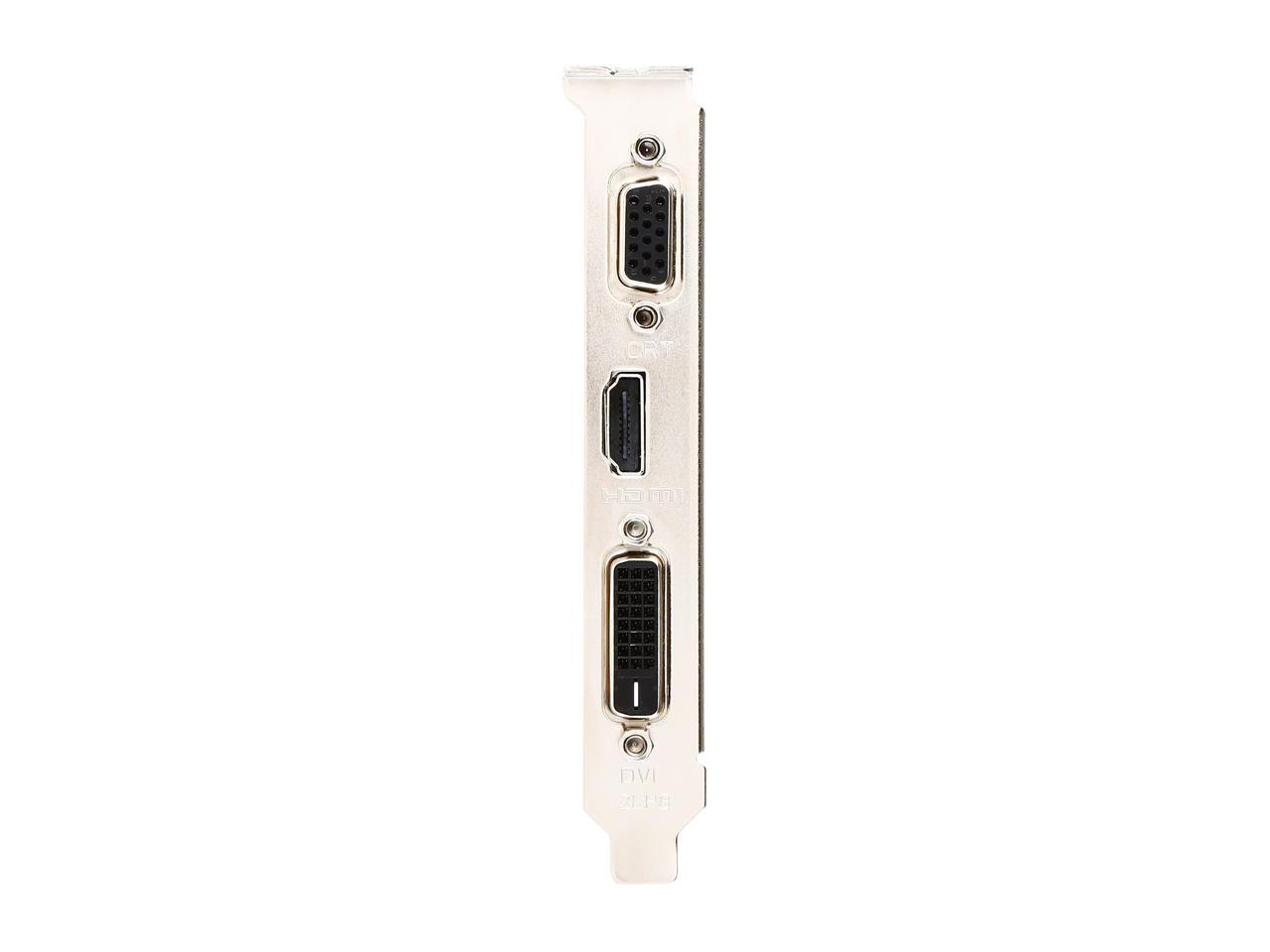 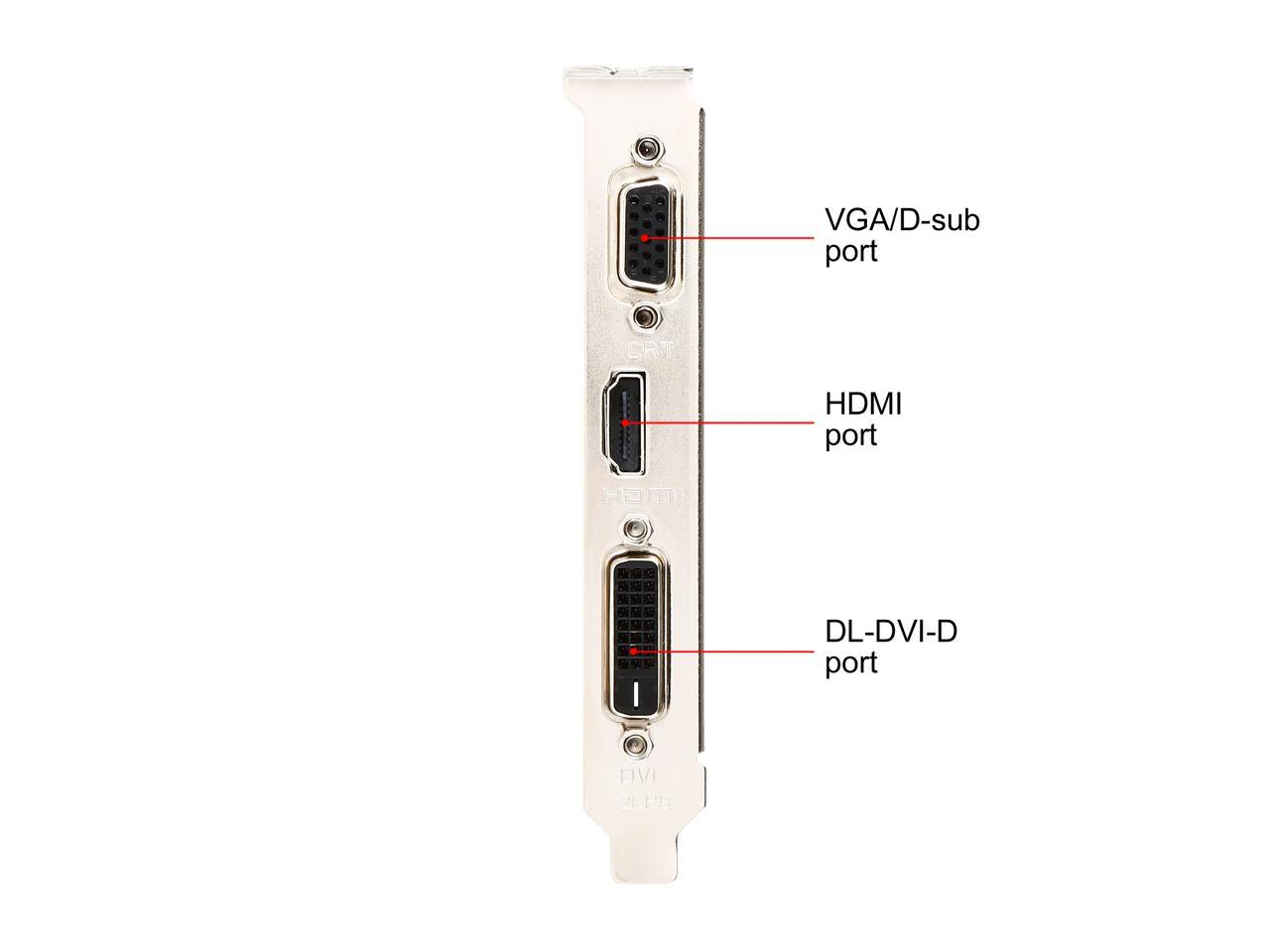 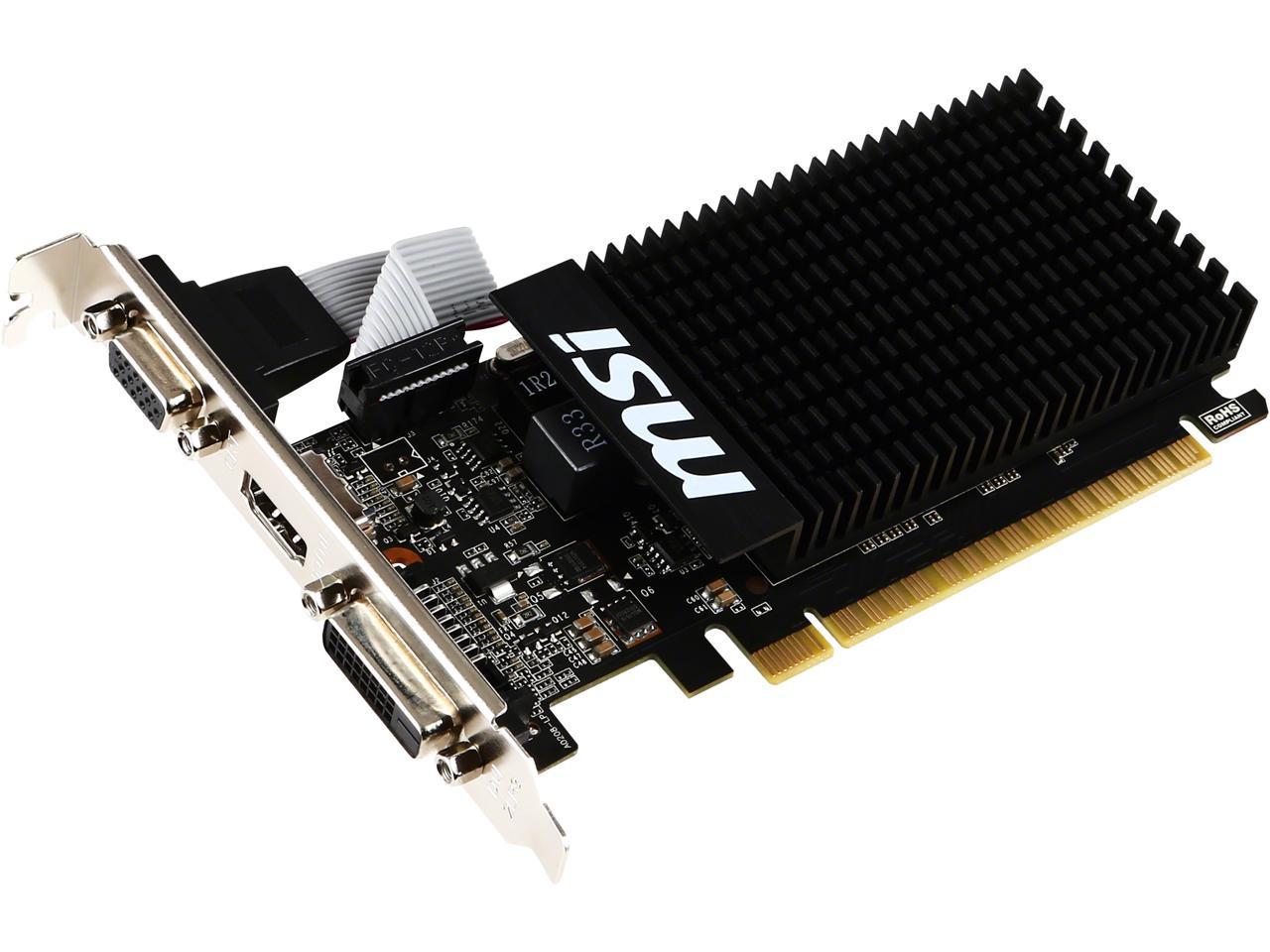 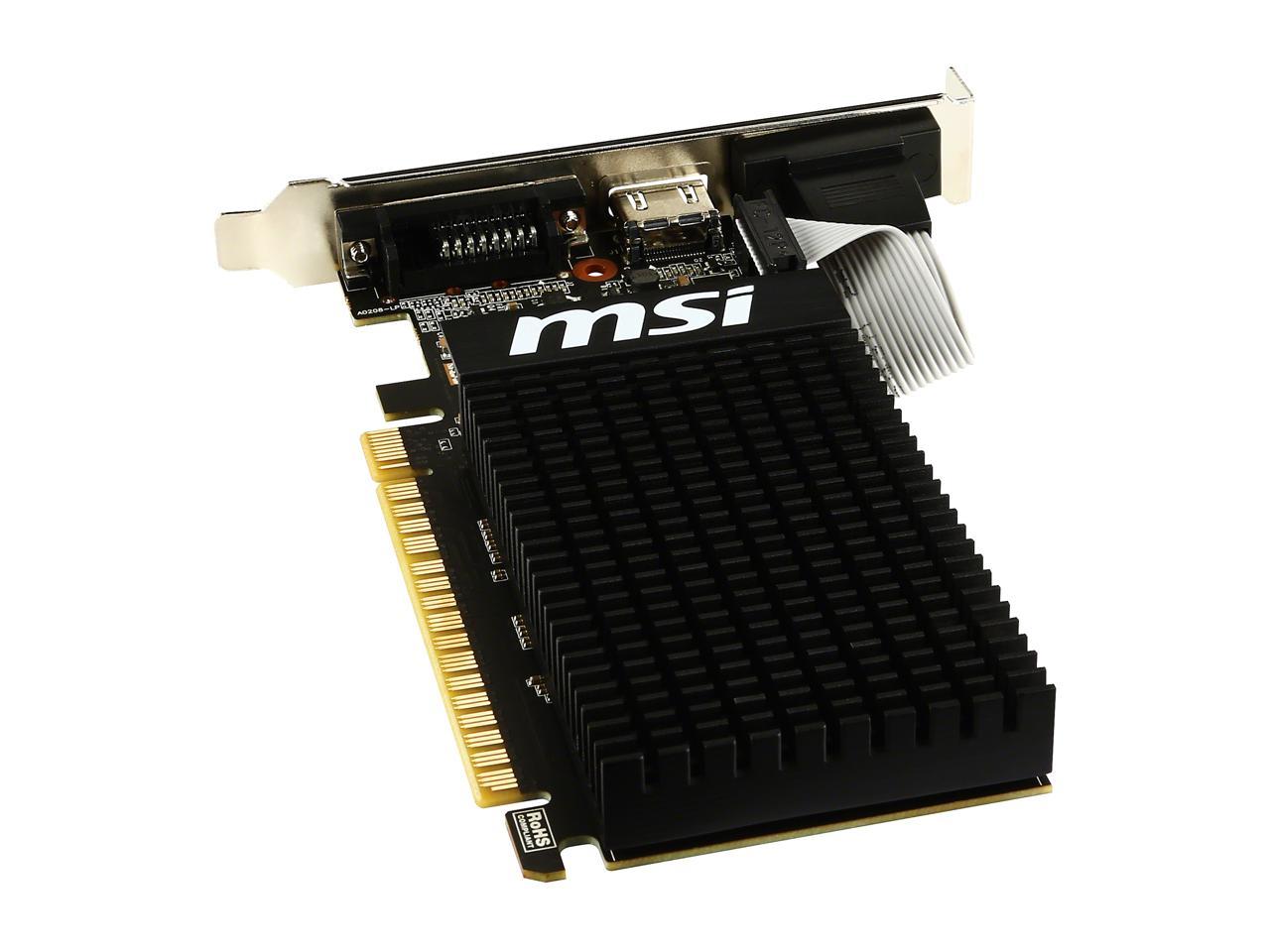 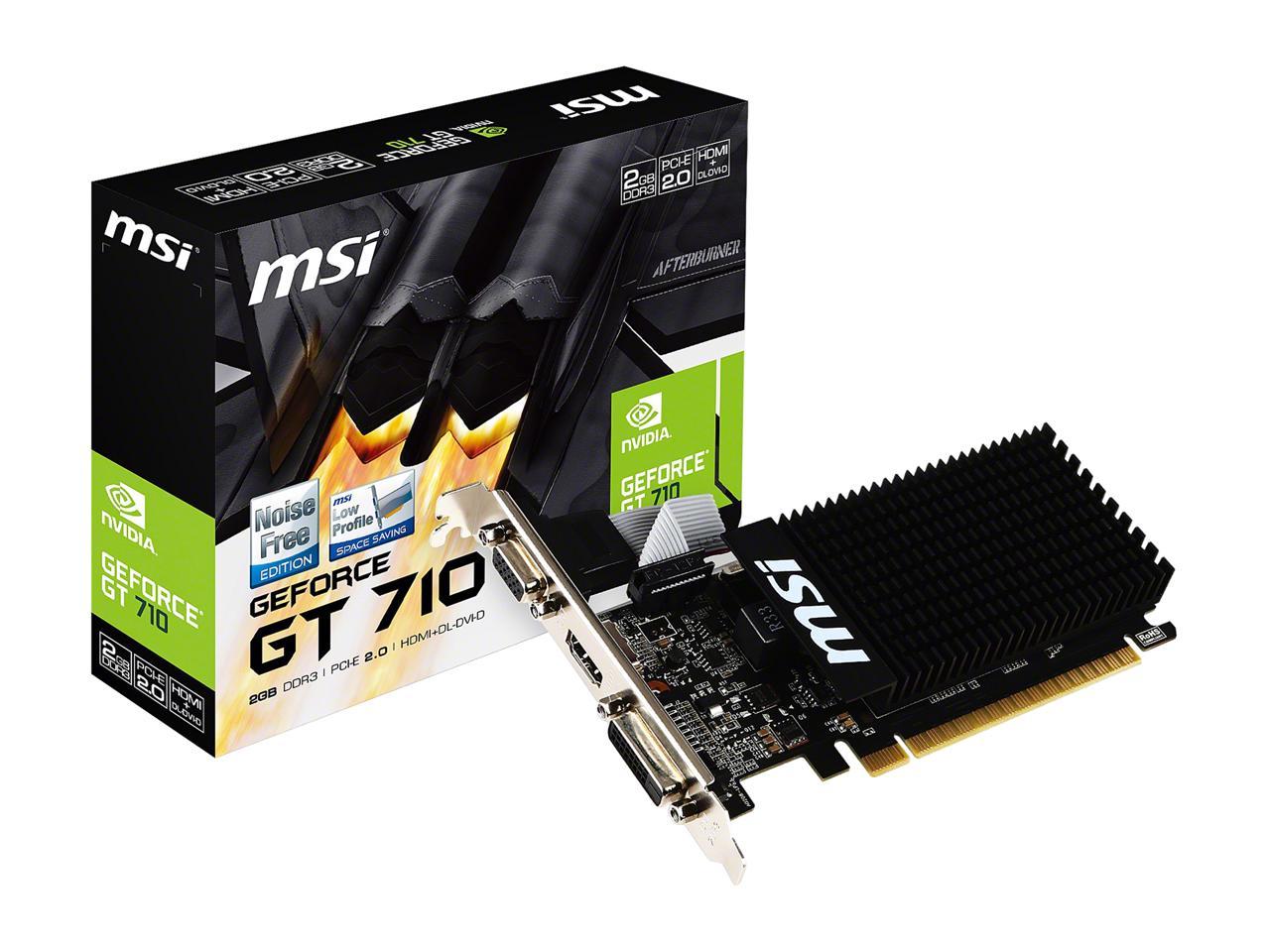 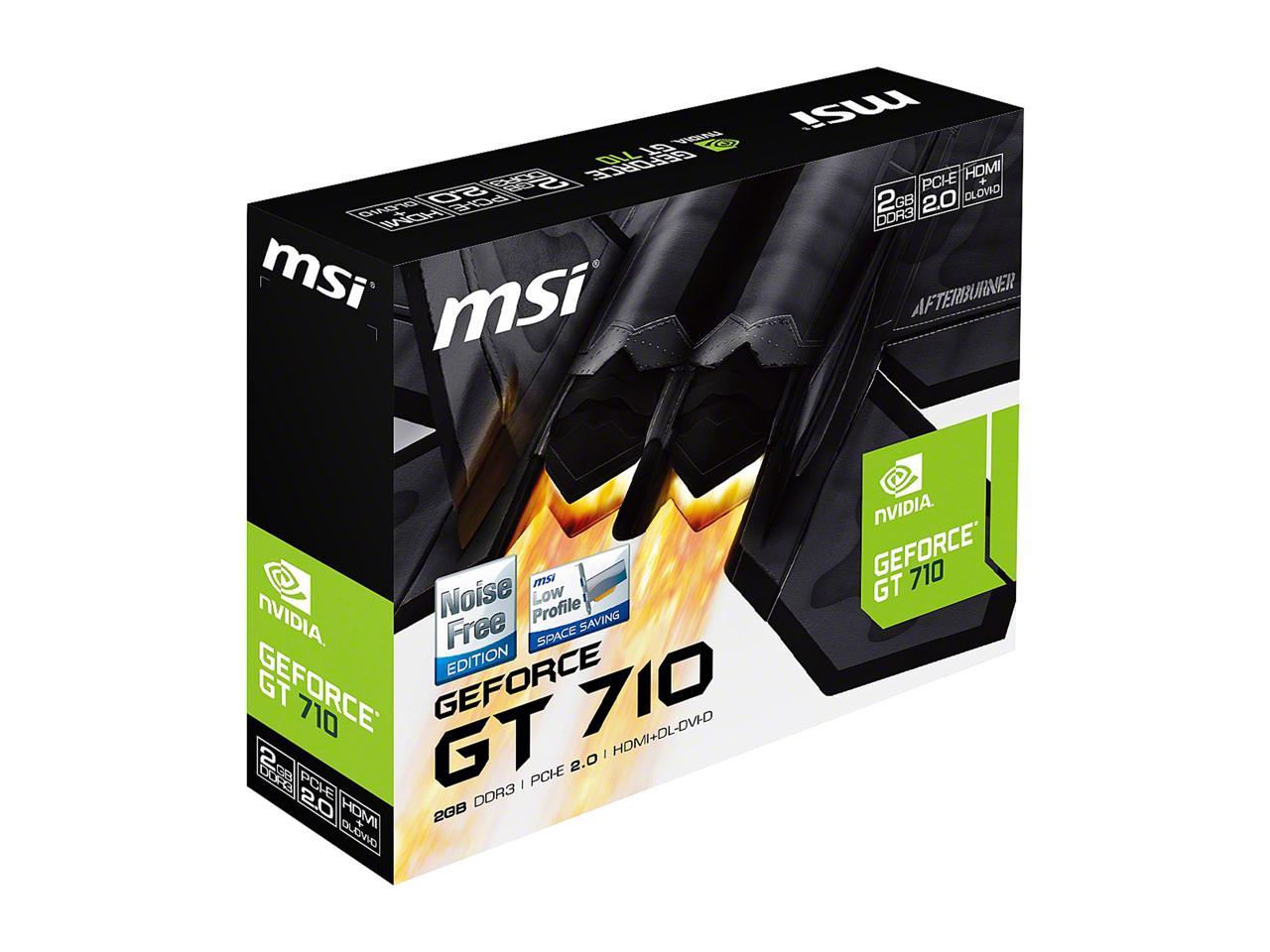 Automatically online download & update Graphics Card BIOS & Drivers, reduce the risk of getting the wrong files, and never have the trouble on web site searching.

Pros: I was glad this GT 710 was plenty small enough to fit in my small computer. Graphics test score is much higher than my previous card.

Cons: During a few brief tests of simple games and 1080p videos, I think I only see a small graphics improvement. It's hard to determine visual differences when I have no way of running old and new graphics cards side-by-side.

Overall Review: I like to sit in silence while I use my small form factor Dell Inspiron 3647 desktop computer, for non-hardcore gaming and general use. I decided to look on Newegg to find a fanless (no noise) low profile PCI-E graphics card with the highest specifications, to replace my three and a half year old AMD Radeon HD 5450 graphics card, whose technology was years old when I bought it. Years ago, I had to drill away some of that card's aluminum heat sink to get the 5450 to barely squeeze into my computer. So the dimensions of any new card could not be any wider or taller than my 5450. Hopefully smaller. The fanless GeForce GT 710 I found here has a core clock of 954 MHz, compared to 650 MHz in my old HD 5450. The GT 710 has 2 GB of memory, compared to 512 MB in my HD 5450, so four times the memory. I also wanted a card that would support a 4K monitor, in case I want to buy one later. The GT 710 does do that, but only via HDMI, which is fine. As I said, the dimensions of the GT 710 were important. The length and height are stated here as 5.75” by 2.72”. That's smaller than my 5450, which is good. But no width measurement is stated on this website. On my 5450, the heat sink was split between both sides of the card. The 710 shows the heat sink on only one side, the side that would be up against the wall of my computer. I hoped it would fit, and I ordered it. Before I received the 710, I wanted to test the graphics performance of my 5450, to later compare to the 710. I downloaded the free ChrisPC Win Experience Index program, and ran it. That tests five parameters. The desktop graphics performance subscore was 2.4 on a scale of 1.0 to 9.9. I received the 710. As expected, the card already had the three-slot (DVI, HDMI, VGA) high profile bracket attached. There was a low profile bracket with one slot–VGA–in the box. But using a 3/16” socket, I removed the three slot bracket, and installed the other low profile bracket from the box–the one with DVI and HDMI slots. The entire height of the 710–including the electrical pins (or whatever the bottom part is called)–was 2 and 11/16 inches; .03 of an inch lower than the specs stated in Newegg. Which is good; smaller is better for me. When seated in the computer slot, the card's height above the top outside of the slot was 62 mm. That was significantly lower than my old card. The width of the entire assembly (card body, space, and heat sink) was 16.5 mm. Since I had 23 mm of width from the computer case to the far side of the slot, I had 6.5 mm of space to spare. So the whole card fit easily. I removed my old card and installed the 710. I could have used the temporary resolution of 1024 by 768, and gone straight to the GeForce website, where I knew the most recent graphics driver was. But I wanted to first install the oldest driver; on the disc that came with the 710 card, test the performance, then try two other sources for the driver, for the purpose of comparison. I installed the driver from the install disc, rebooted, and ran the Chris PC test. The desktop graphics performance subscore was 5.5; much higher than the 2.4 on my old card! That's quite a leap, but what that means in real-world non-hardcore gaming, was still a question. I then downloaded what I thought would be the second oldest driver, from the MSI website. It was three and a half months newer, but the graphics subscore still ended up being 5.5. I then downloaded the newest driver, from the GeForce website–two months newer than the MSI driver, but after another test the graphics subscore remained 5.5. After all of that, I think I only see a small graphics improvement. But my old card, originally designed and produced in 2010, was so ancient, I'm still glad I updated to a newer card. I wasn't expecting some huge graphics improvement in my cheap, old, small computer that was not designed for hard-core gaming. I also downloaded a different graphics card information-finding program, the free GPU-Z program. Here's a link to a photo of two results; from my old card, and from my GeForce GT 710 with 2GB of memory: https://goo.gl/photos/wXHDD71wqiqtWHzq9 —Larry Parker, Fullerton, California

Pros: Low profile like I need. 2 GB. Put it in , loaded the drivirs, works great. I playing games that wouldn't play without it. ( Fallout 4, Call of Duty, ect. ) Great Price!

Cons: At this time at least, Adobe Lightroom users, must use older nVidia drivers, to take advantage of the card. Note, it does work.

Pros: This video card will improve your video speed considerably if you are using integrated video. I would put it at the low end of gamer video.

Cons: Not for gaming on the high end but I knew that before I purchased it.

Overall Review: For gaming you might consider a board costing twice as much.

Pros: Good deal for the cost

Cons: Had to install MSI drivers second time after a Windows 10 upgrade. This was not problem with device.

Overall Review: I would purchase again.

Overall Review: Was a great replacement for a PC manly used for videos, graphics, browsing, and general PC use. I wouldn't say to use it for high video and graphic editing or game play, but no complaints and stays very cool.

1 out of 1 people found this review helpful. Did you?
Manufacturer Response:
Dear Valued Customer, Thank you for sharing your experience with the MSI graphics card! If you would like further technical assistance, please feel free to contact our technical support department directly at 626.271.1004 from M to F, 9am to 6pm Pacific Standard Time. Thanks for choosing MSI! Best Regards, MSI Review Team
Joel B.
Ownership: 1 week to 1 month
Verified Owner
GT 710, a Inexpensive answer for my application.4/7/2020 10:31:32 AM

Pros: This video card was exactly what I needed for my computer build. Motherboard had a video interface , however, it was disabled and incompatible with the bios configuration. For the price of the video card, I saved myself many man-days trying to fix the bio configuration short comings.

Overall Review: Inexpensive, passive cooling is a plus for my application. Totally satisfied.

1 out of 1 people found this review helpful. Did you?
Manufacturer Response:
Dear Valued Customer, Thank you for sharing your experience with the MSI graphics card! If you would like further technical assistance, please feel free to contact our technical support department directly at 626.271.1004 from M to F, 9am to 6pm Pacific Standard Time. Thanks for choosing MSI! Best Regards, MSI Review Team
Scott S.
Ownership: 1 day to 1 week
Verified Owner
Works perfect10/2/2016 1:19:57 PM

Pros: Easy to install, works perfectly in my older 775 board.

Overall Review: Just plug it in, run the install disk and enjoy