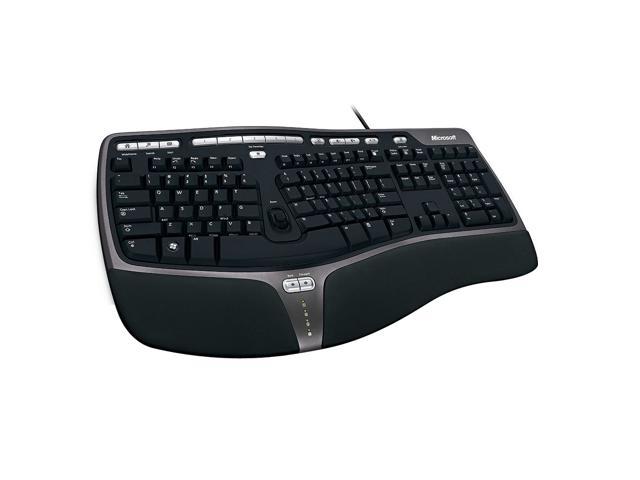 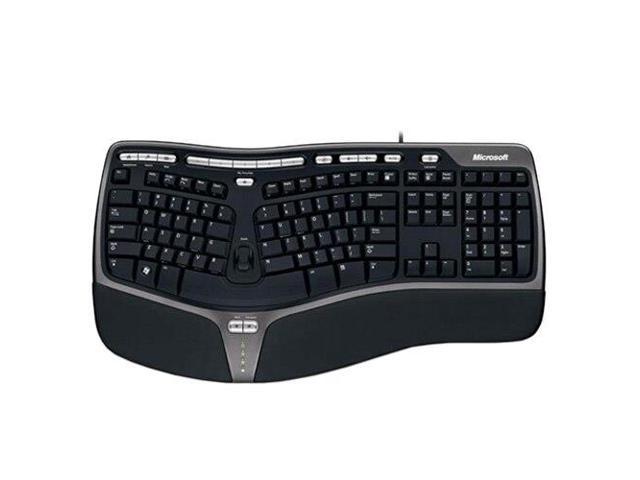 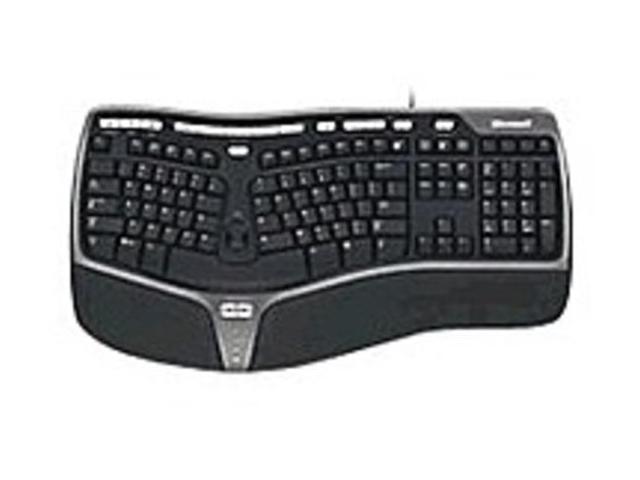 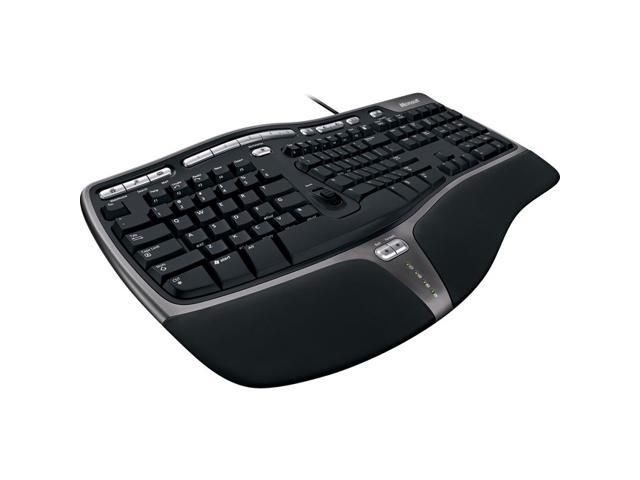 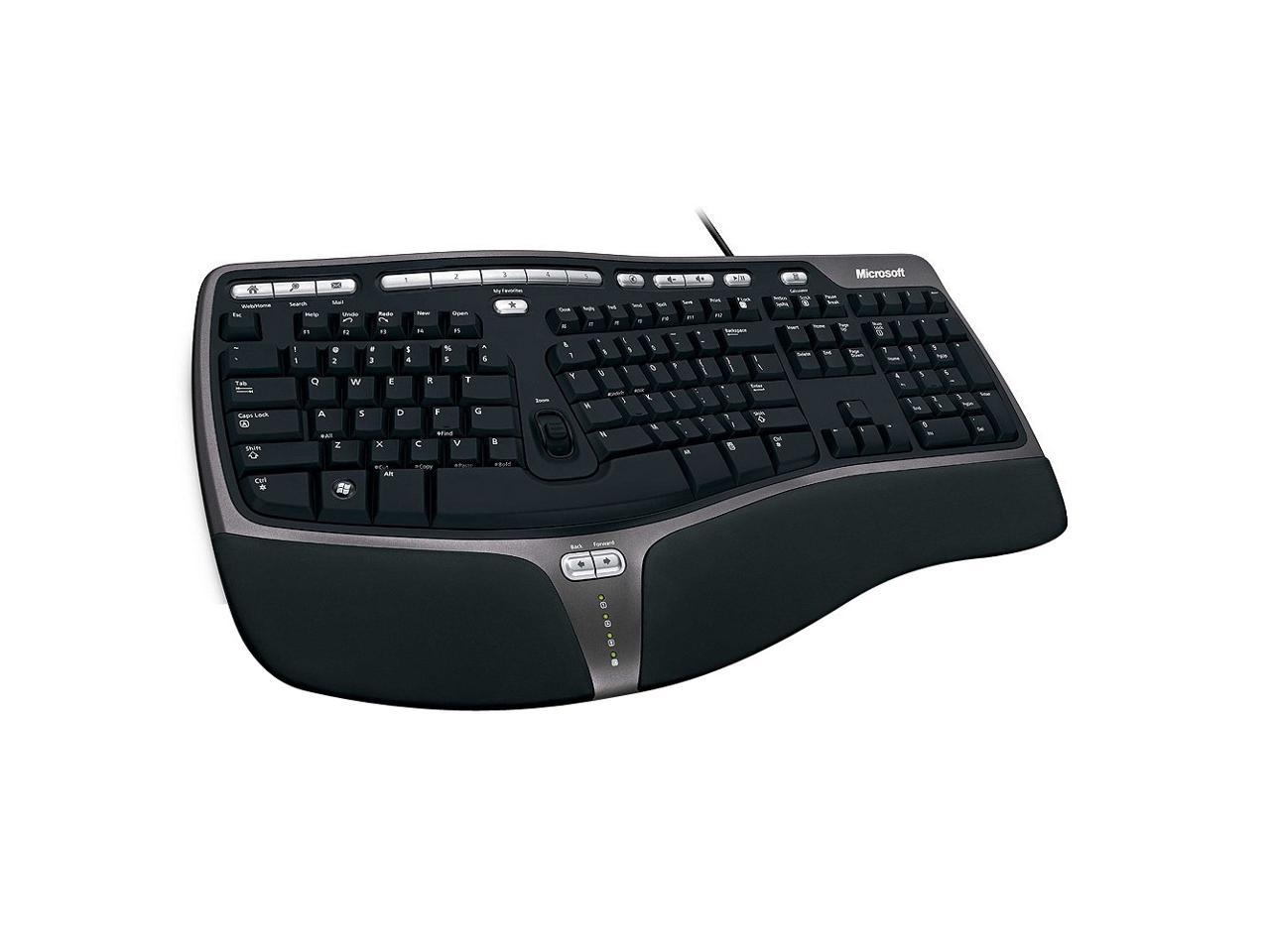 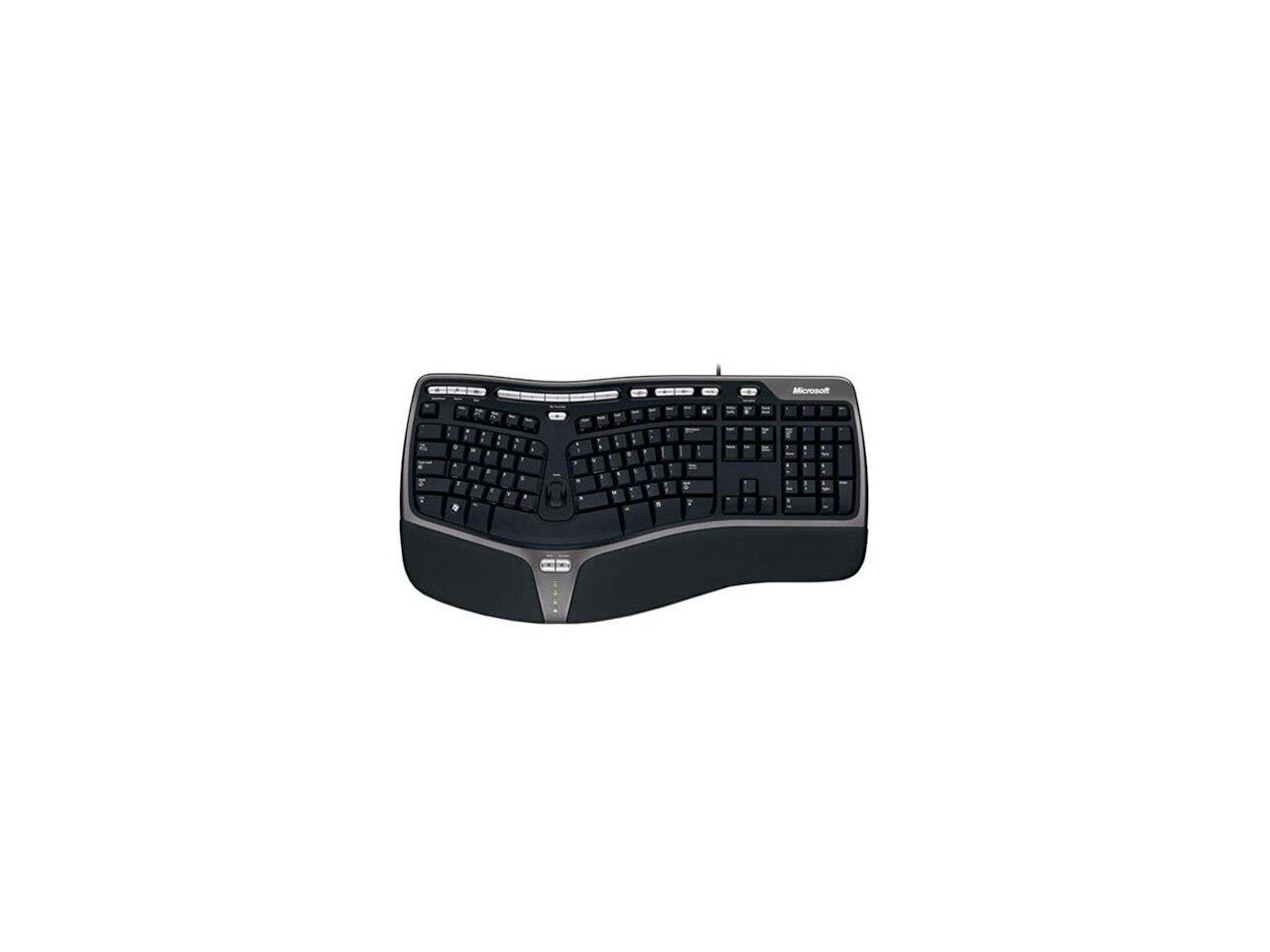 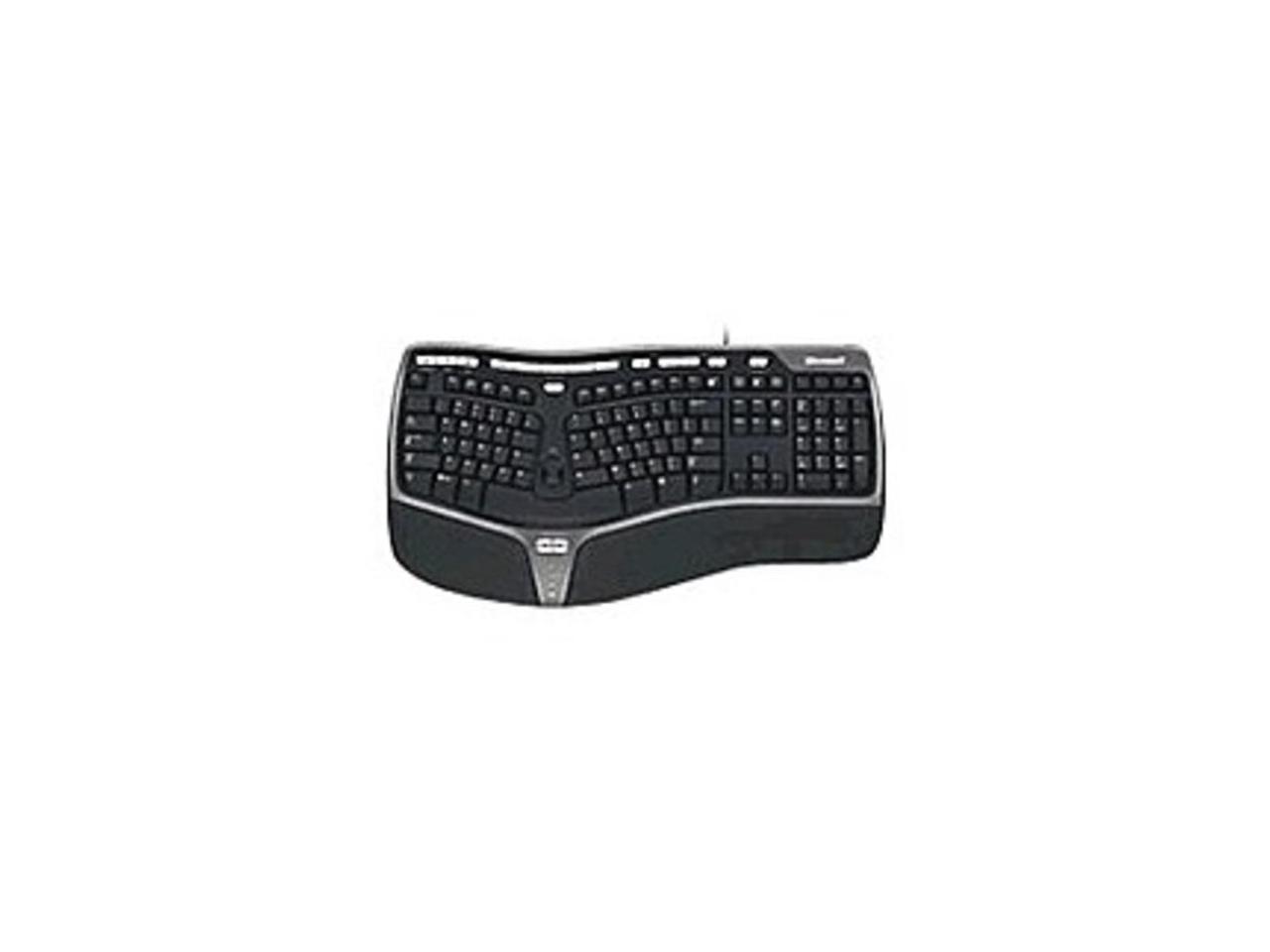 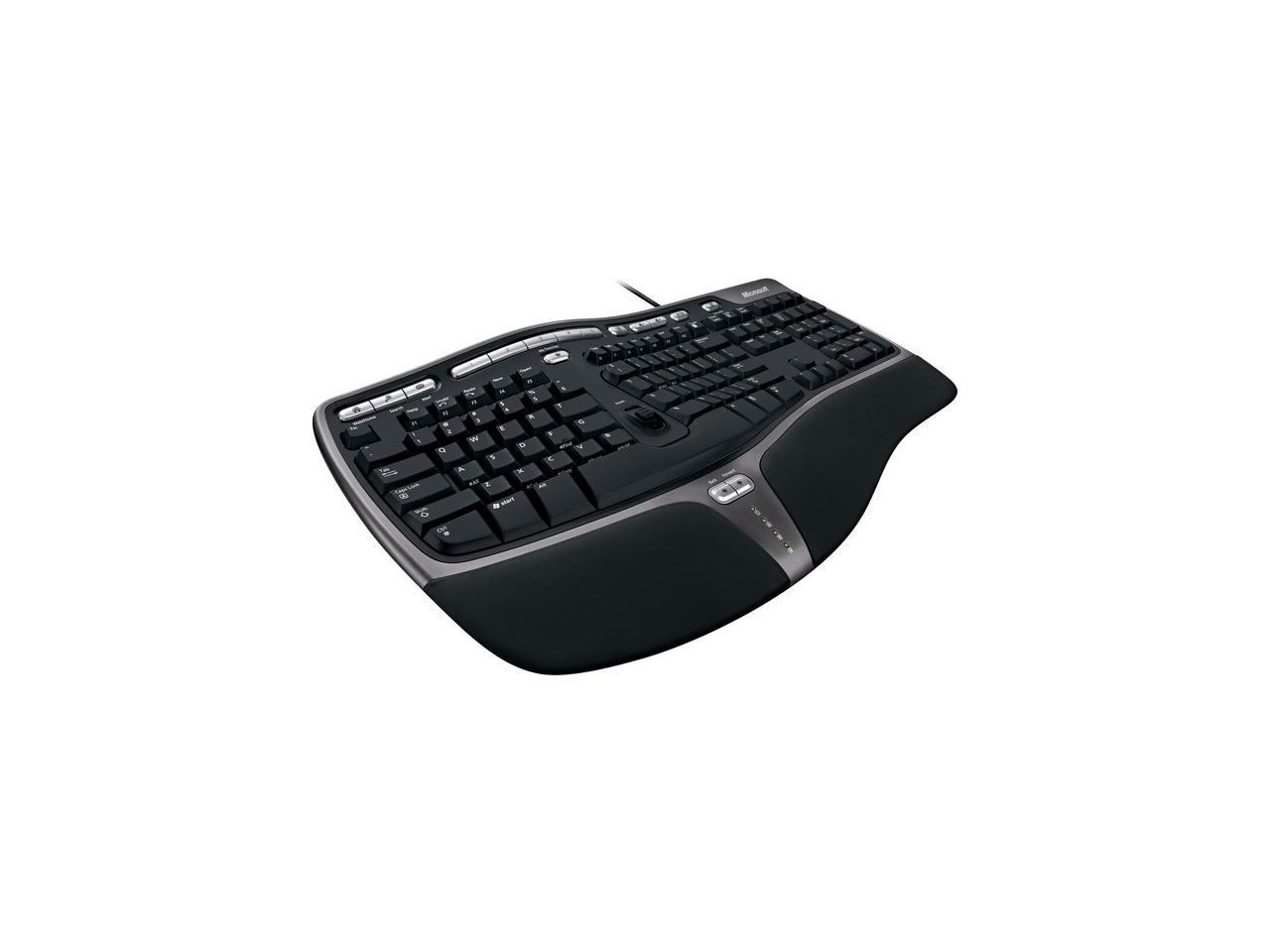 Learn more about the Natural Keyboard 4000 for Business

Pros: Ergo, Price... Features, I guess (I don't use them). I also like the black color. I really like the attachment that ads more tilt back. I can't see some if the keys because of the angle, but I don't need to and for me that option is comfortable. I can't complain about the key pressing. I like the feel or am just used to it. I type between 40-70 words per second, depending on content. I also use a lot of hot keys in excel and PowerPoint, number pad, etc. keys register consistently, no double taps and everything seems very accurate.

Cons: Like other users, keys failed after some time. The letters are worn off the keys. Home row and popular keys are invisible. I have had it go missing on occasion from the device list (not working) on boot up and maybe coming out of sleep (after a new OS load and before I disabled sleep). Unlike others, I always assumed that was my desktop USB network (Asus P6T Delux v1 and like four hubs with scanners, printers, cam, external daddy's, USB drives...) the keyboard is plugged into my dell monitor hub, so I just hit the power switch off/on the monitor and the keybd works again. It is worse with windows 8. At the dual boot screen, My mouse (logitech MX Anywhere (silky org@sm)) or keyboard don't get recognized for like 20 seconds. That is around half the total boot up time. Problem happened on Win7 too.

Overall Review: Ten years ago, I got the "white" version, probably the original. I still have it hooked up to a server that I almostly access remotely, but it still works. It is a bit more clickety than the new model, is dirty and yellowed from age. About four years ago, I got my first one of these new black ones. It died of key failure - first the left shift key (hot keys). I figured maybe I was a little aggressive. I tried to live with it for a month, but it was driving me crazy and then another key failed. So now I am on the second one and somehow I have a brand new spare in the closet. The second one is still working great, but as I said, letters are worn off. I've tried the spare and it is only barely more "fresh". The second one is maybe slightly broken in, but maybe only in perception. So after enough use to wear the letters off, the action is virtually the same. Maybe I should have given it five stars. The worn letters perhaps could be etched or embedded, so the paint doesn't wear off and even if it did, still visible.

Pros: I loved this keyboard. great design. very comfortable. easy to use.

Cons: My first one lasted more than 3 years. Several months ago, I finally replaced it. that one lasted about 6 months and I blamed my kids for its failure but the new one lasted less than 2 months. The forums say the metal that makes the contact is too thin and breaks creating a bridge or shorting out some keys. Very poor quality. Shame on you Microsoft for endorsing this manufacturer.

Overall Review: I wont buy another one. I'm typing this, angrily, with my mouse and on-screen keyboard until I find another ergonomic keyboard worth my money. out of newegg replacement warranty and I threw away the box. never did I ever think "A KEYBOARD" would drop dead in a matter of weeks. unbelievable.

Pros: We have repeatedly purchased this keyboard many times because its key layout is perfect. So, why the three star rating. We gave it only three stars because of the internal design of the spacebar on the keyboard. See: Cons

Cons: Having owned many of these keyboards our only complaint is the internal (mechanical) design of the spacebar—it is 5¾" wide centered on the keyboard over 1 physical key-switch. It has a torsion spring in it that is designed to make the switch functional across the entire wide key; but therein is the design flaw—due to the weakness of the mechanism over time (a month or so of regular use) the key does not work well when it is pressed from either of the sides. the switch binds up so that when you type on the space bar you get no results. The switch still works; but, once the initial lubrication wears off the plastic limiters designed to aid the torsion bar to provide enough pressure to activate the single key switch bind up and the switch is not activated unless you can train yourself to always press the space bar directly in the center (over the key-switch itself.

Overall Review: We have been able to keep these keyboards in service by using "White Lightning brand white bicycle chain lubricant". We would be pleased to see Microsoft split this long spacebar into two distinct keys—one for each thumb. That simple change would make this keyboard perfect!.

Pros: I like the divided and highly curved key layout. I'm a big guy and it is frankly more comfortable to be able to angle my hands this way. Overall touch is good, different than the Logitech boards I've been using, but good, positive key feel.

Cons: The attached wrist padding is somewhat slick, requiring frequent relocation of my hands. Also, the space bar, un-like all the other keys, makes a loud CLACK when pressed. Considering how often the space bar gets used, it should be much quieter.

Overall Review: Quick look review: My first impression was size; this sucker covers a lot of acreage. That isn't a problem for me but it might be for others. Also, the space bar noise could be a problem in an office environment.

Pros: If you have large or long hands and need a real ergonomic keyboard, this is it.

Cons: Don't let this thing get wet or even damp. Moisture of any kind will put this keyboard in the garbage instantly.

Overall Review: I am now on my tenth keyboard in as many years. I really want the old Microsoft Natural Keyboard back, they worked forever!

Cons: Everything else. I'm typing on it right now and am having a heck of a time. The keys get harder and harder to press as time goes on. And this is not due to crud inside. I just removed half the keys to clean the mechanisms. If anything, it is now worse than before. The spacebar is almost completely unusable. It holds the weight of my phone without being pressed. That's 8 oz according to my postal scale.

Overall Review: This keyboard was okay at first. Now it is killing my hands. Save yourself. Buy anything else.

Pros: Looks awesome. VERY comfy. You will have fingers like Remo Williams after a couple weeks of using this mushy thing. Newegg top flight delivery of the world.

Cons: Deduct an egg for substandard mushy keys. Expected a little better. I know its not a mechanical keyboard but I still did not expect Jell-o of this magnitude. If you love Jell-o, or even simply tolerate it, then order away because the overall comfort level is worth it.

Overall Review: You might be tempted to immediately remove the front riser from this keyboard without even trying it out... which is exactly what I did. After being thoroughly unimpressed for a few minutes, I replaced the riser and was pleasantly surprised at the improvement.. plus this creates a large dome like environment in which to store herbal supplements. The two halves of the keyboard are symmetrical and not canted slightly like the old nattys... which kind of sucks because that odd angle was what made it natural...

Cons: If you rest your hands on the hand rest, it pushes the plastic against the space bar causing it to stay down and become erratic

Overall Review: This is my first ergonomic keyboard in years but some joint pain in the hands led me down this path as a way to help. I am getting used to the new hand orientation changes from a "standard" keyboard, but the one thing that may break it for me is the hand rest. When you let your hands rest on it from the home position, as many of us might do, it pushes the plastic in front of the space bar forward to close the gap and make the space bar stick. It's annoying because you'll be typing along and realize that the space bar either isn't working or it's adding many spaces because it's in the stuck down position. My only solution is to lift my hands while I type (making my high school typing teacher proud!) but defeating the benefit of the rest. Otherwise, this is a sturdy keyboard with many features and function that I'll surely explore in the coming weeks.