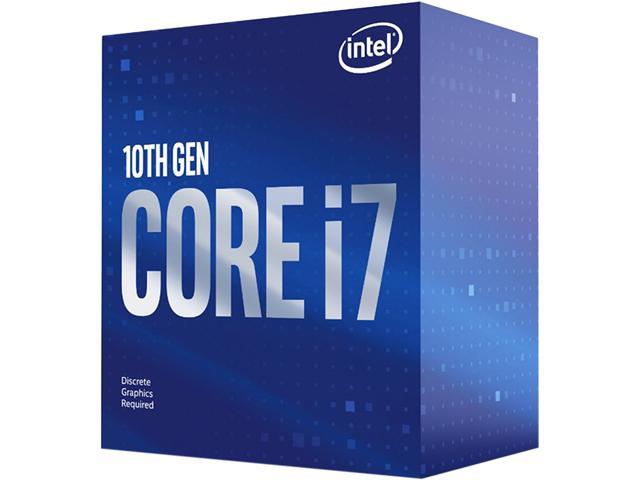 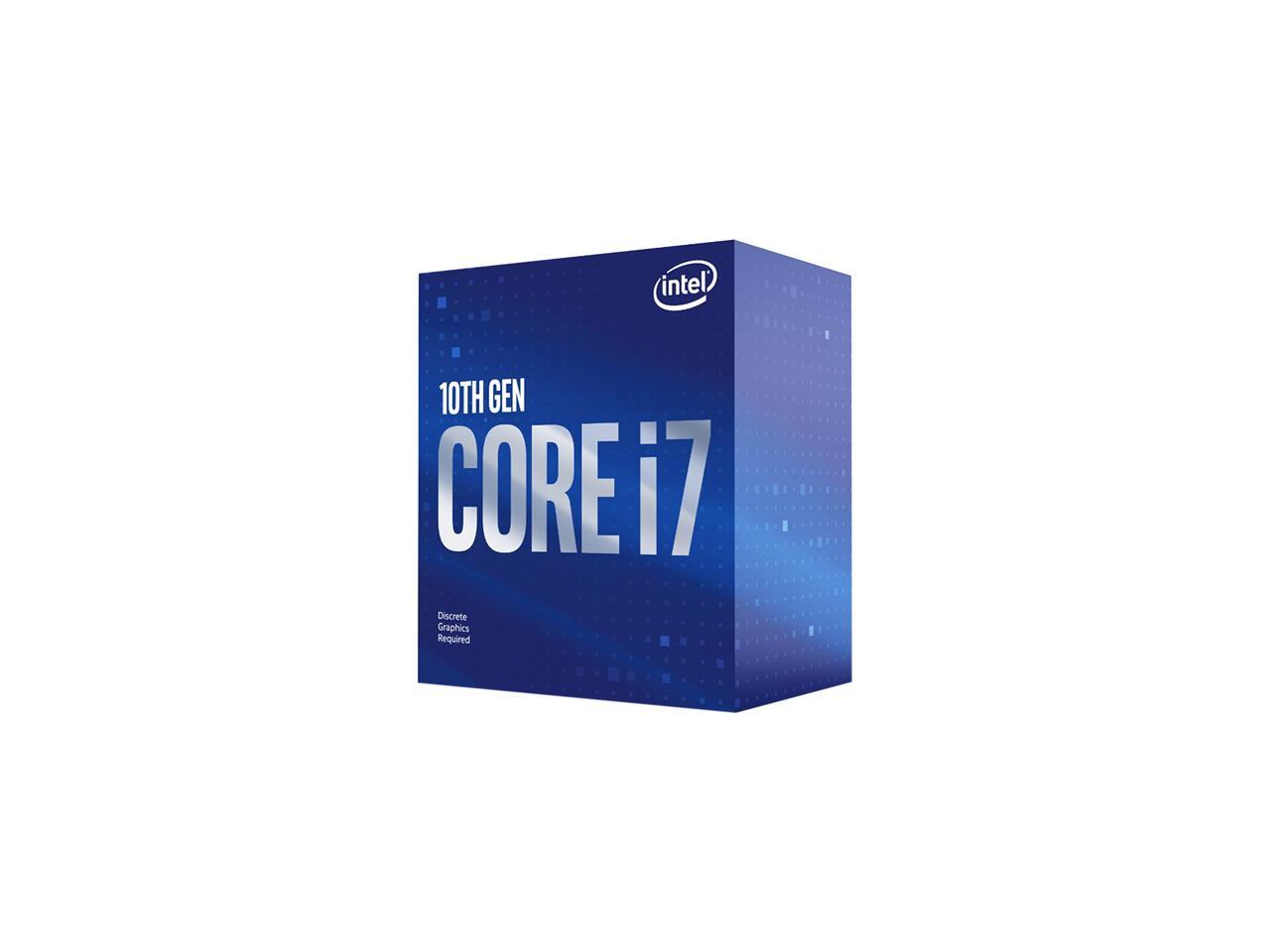 With up to 4.8 GHz clock speed, 8 cores and 16 threads, the Intel Core i7-10700F processor supercharges your new PC build and enables incredible experiences and productivity for gamers, content creators, and mainstream users. Shatter the performance barrier and enter the realm of immersive 4K entertainment experiences and play the latest gaming titles like never before. Or simply get work done in less time by supercharging the latest business productivity applications for a higher level of collaboration and productivity.

The Intel Core i7-10700F DOES NOT have integrated graphics, so a discrete graphics card is required to complete your build.

Built-in intelligent performance features learn and adapt to what you do, dynamically directing power where you need it most.

Pros: - Blazing fast, will tear through anything I throw at it (see the Cinebench scores attached) - I video edit a lot and it's always right there with me - Stays nice and cool at idle and doesn't get too hot with my closed AIO loop (the pics have it when the thermal paste was a little under done) - 8 cores and 16 threads are amazing for gaming - SMT is great! I was looking for a CPU with it. (SMT is simultaneous multi threading and it means that every core has two threads instead of one thread per core)

Overall Review: - I was looking at this CPU (which was a little on the high end of my budget) compared to the i5 10600K, but went with this one, because I do a lot of video editing in 4K and so the extra cores would do me nicely. - If you only need a processor for gaming, a 6-core i5 is still the perfect budget option (of course, if you're team blue :)

Overall Review: I bought this without gpu using it with msi radeon rx 550 4gb oc graphics card and also using liquid cooling on it. Works perfectly.

Pros: - Very high spec for the price - Relatively power efficient in everyday use

Cons: - Installation took a bit of force, almost a concerning amount - That boost clock is definitely quite momentary without power limits removed - Always a little silly to have the iGPU built into the CPU but unusable

Overall Review: It's always really hard to review a CPU if you're not a power user or obsessed with benchmarks. From what I can tell, it runs very well and absolutely is not a bottleneck in any games. The oddly low official RAM speed is a bit annoying, and I'm currently operating with just the official 2933 MHz just to be safe. Trying out some higher speed RAM is definitely on my to-do list. Being an F SKU part, there's an integrated GPU that's disabled, which saves you a few bucks, but always just feels kind of weird to buy something that deliberately doesn't work. Now, relative to this CPU's main competition, I think it's pretty strong, but has some noticeable limitations: unlike AMD or 11th gen Intel, you can't use PCle 4.0 SSDs. Now, those are still very expensive and in their early stages, so you're not missing too much, but if you care about read/write speeds above all else, you'll be a tad disappointed. Most people would tell you AMD has a superior architecture, and most benchmarks bear that out in terms of performance. This chip only really makes sense at a ~$340 price point, where it's essentially beating the Ryzen 7 5800x by $100, though the more expensive Intel motherboards chip into that difference. I suspect gaming performance between the 10900f and a Ryzen 5 5600x or even an i5-11600k would be disappointingly similar for the higher price. The reasoning for this chip definitely is a very specific use-case: very strong gaming, but also with pretty decent video-editing or compiling use, AND you're kind of an Intel fanboy. It's a challenging spot to be: do I kind of just wish I had got a Ryzen 7 5800x? I won't lie, I've thought about it. But on it's own, the i9 is really a very good processor, and hasn't given me a hint of any headaches. The high core count means it will maintain compatibility has software starts to utilize more and more cores as well. There's sort of a "it just works" sensibility about the thing. No weird BIOS updates on certain boards or any of that. It runs every game (if you have the GPU for it), it's pretty low-power when you're just browsing the web, and it's productivity chops are just fine for all but the most serious of power-users. Maybe save up a little more for the version with integrated graphics, but at that point, you're approaching the price of a Ryzen 7 or a 1900K, which may be better buys. Anyway, solid CPU, it won't do you wrong, but you might second-guess yourself a little if you're the anxious sort.

1 out of 1 people found this review helpful. Did you?
Kymberley S.
Ownership: 1 week to 1 month
Verified Owner
A wonderful, wonderful upgrade; but stock heat sinks from Intel need WORK.5/19/2021 1:21:18 AM

Pros: - Big upgrade from an LGA1151 socket! - Fast - Powerful - Turbos even when not overclocked

Cons: - The heat sink was painful to install. - Thermals are still not stable even with premium paste, meaning my installation still isn't great but I'm not gonna bend my board at this point. - Turbo is both a blessing and a curse and leads to massive thermal throttling due to the dinky heat sinks you receive with one of these.

Overall Review: First of all, this processor is good--in fact, more impressive than I would've thought it would be. All those recommendations? Very wise to believe them. My issue lies with Intel sending these tiny fans with slightly large heat pipes and expecting it to still be able to handle Turbo boost without thermal throttling. This is something I've been thinking since the Core i7-7700K dropped: The Turbo boost should either be off or optional in a program, NOT on by default in the BIOS. Because odds are if your old cooler died or you don't have a secondary option, you will thermal throttle your CPU on accident using the new stock cooler like I nearly did. The problem is, Windows gives you a slight patch in the form of selecting in the power options to turn your max CPU power to 98 or 99%. However, this is not ideal as you'll go from nearly 4.50GHz (which is terrifying, by the way since it's only rated for 4.30GHz tops but I digress) to 2.90GHz with nothing in-between. Not that Intel really cares at this point; but I will say, AMD does do a better job at sending a bulky cooler alongside their CPU to help deal with thermals. As I said at the beginning though: The processor itself is great. If only Intel would work more on their cooling solutions out of the box to incentivize people, especially beginners, to use their products...

5 out of 7 people found this review helpful. Did you?