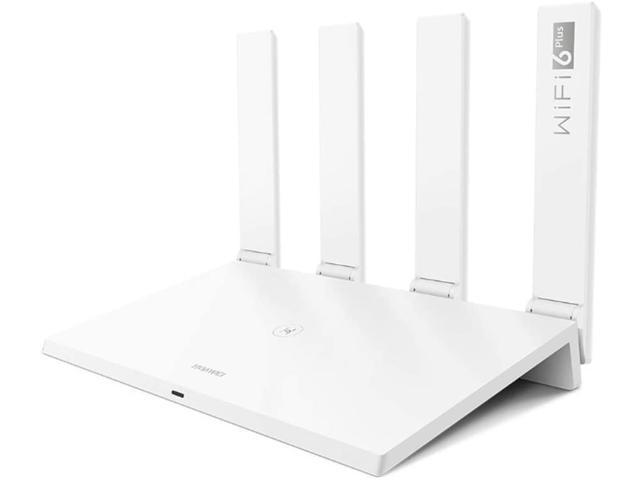 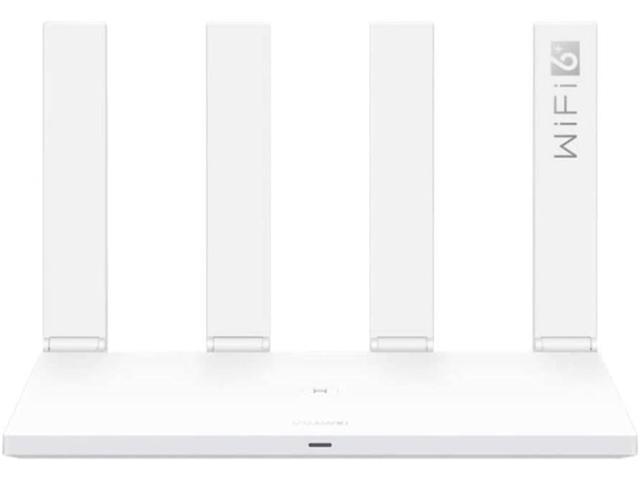 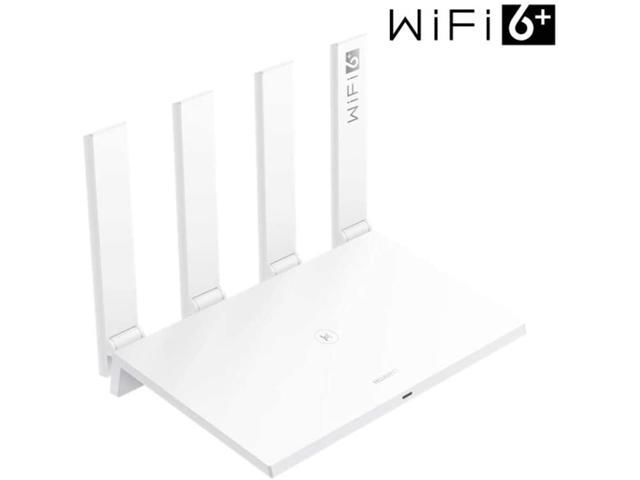 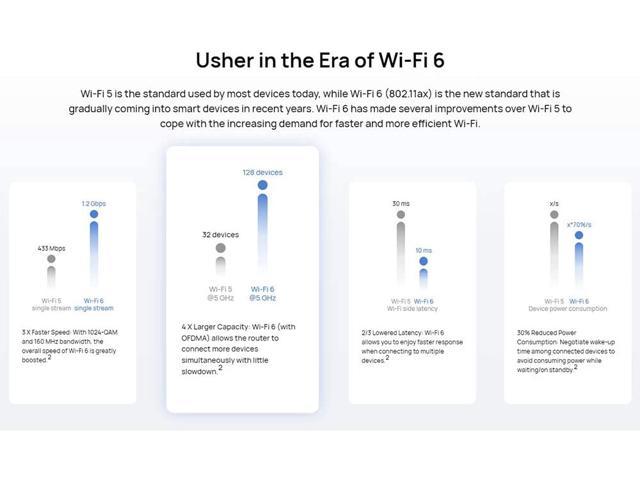 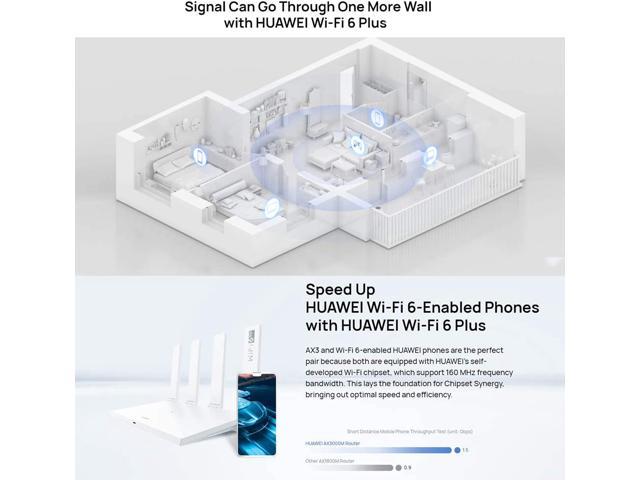 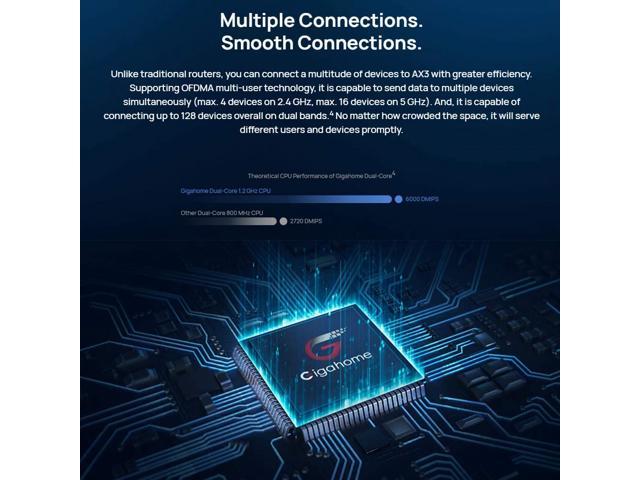 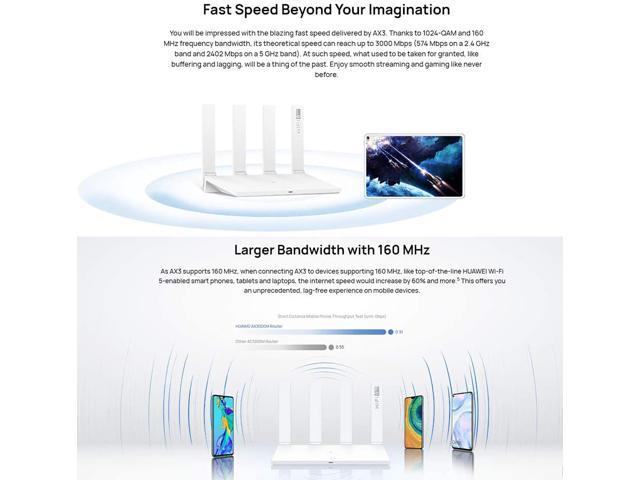 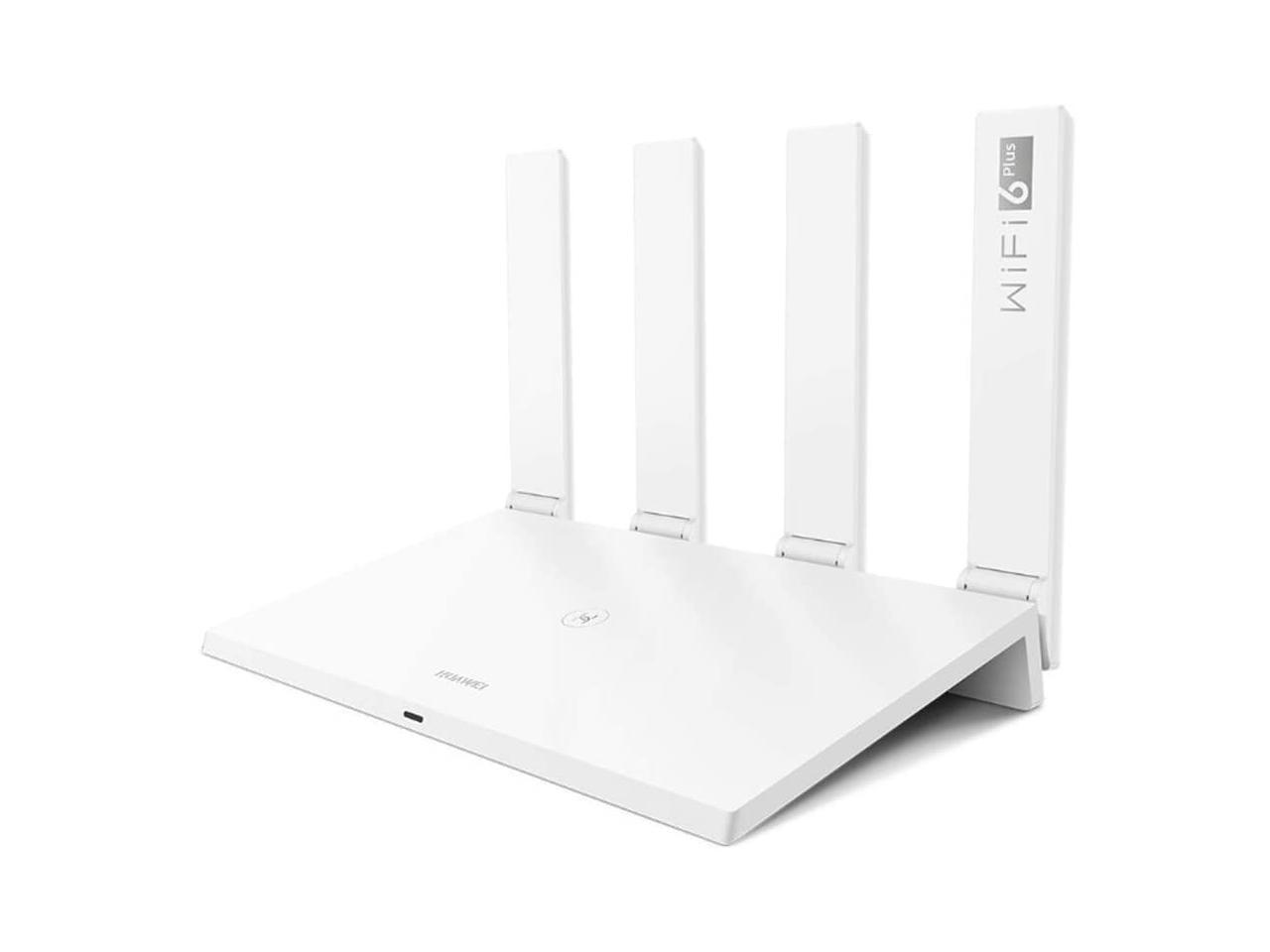 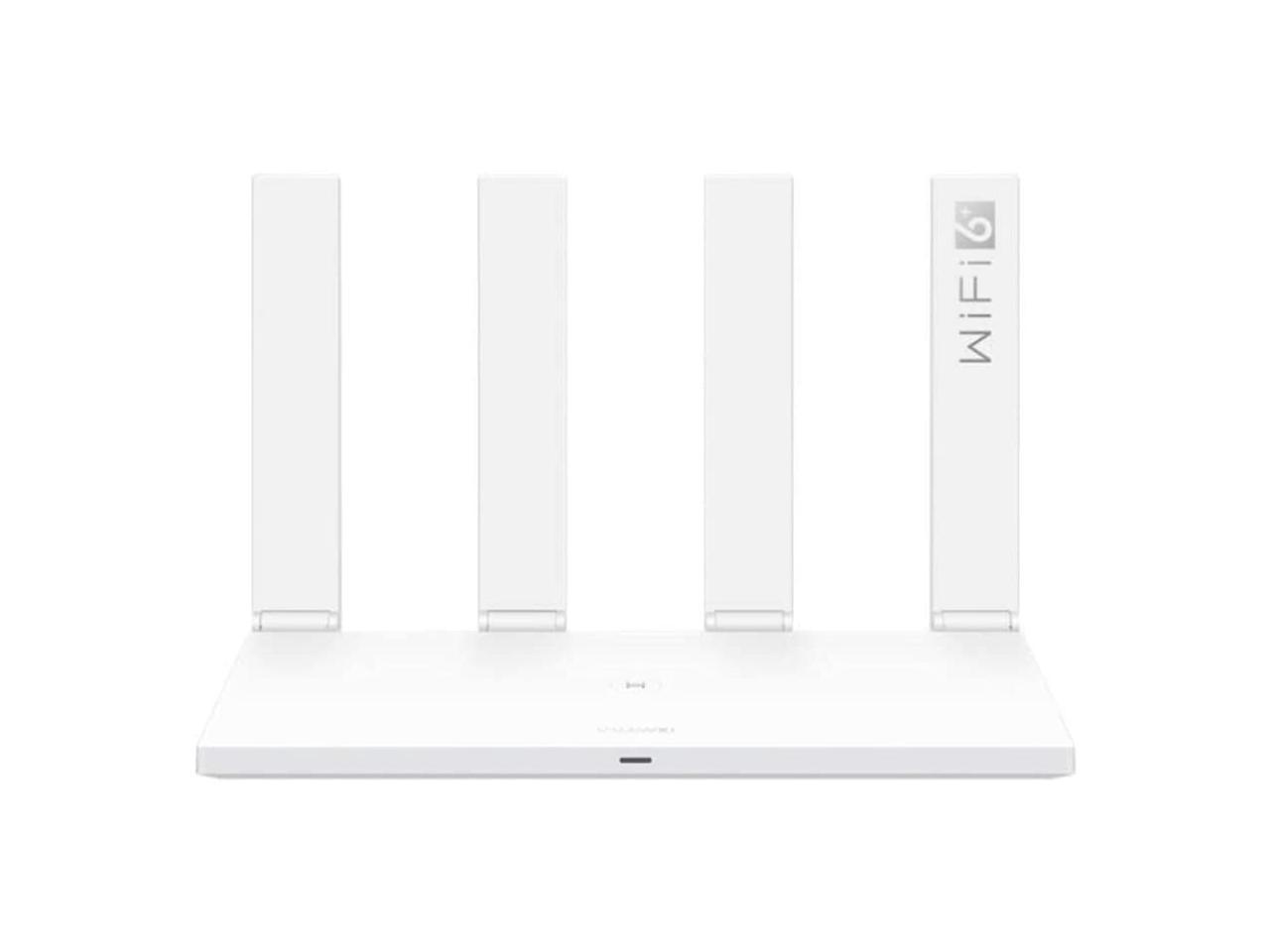 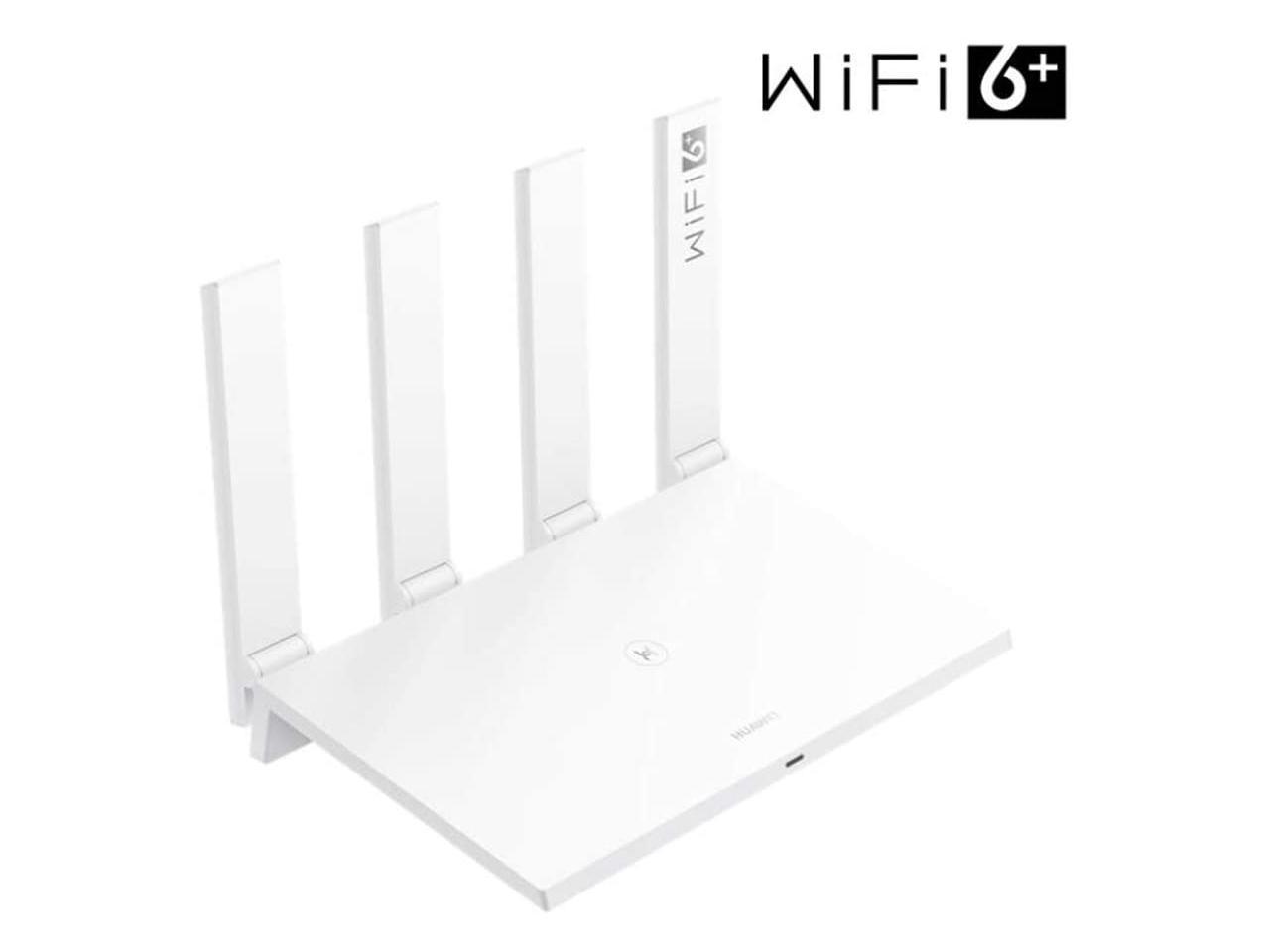 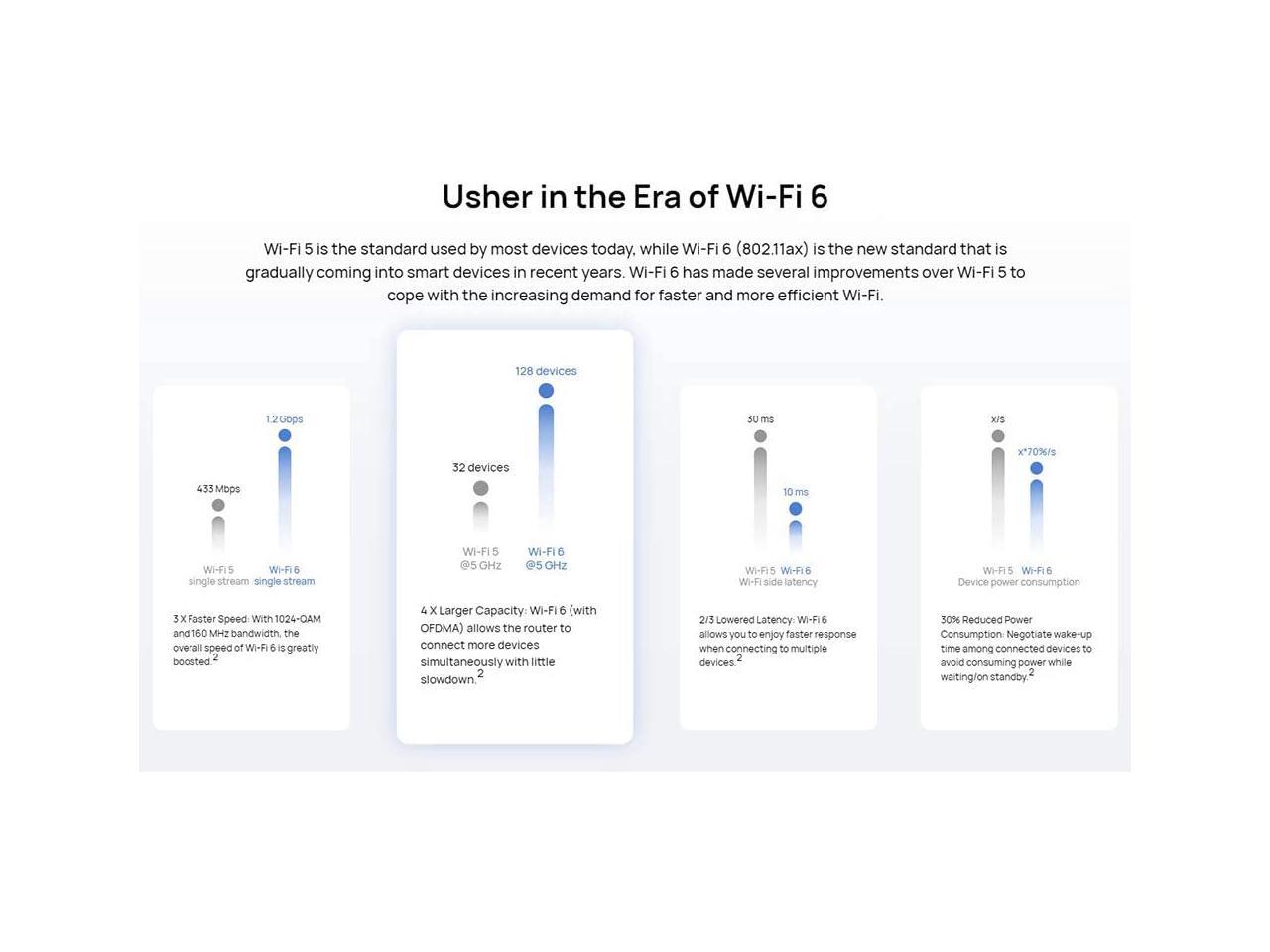 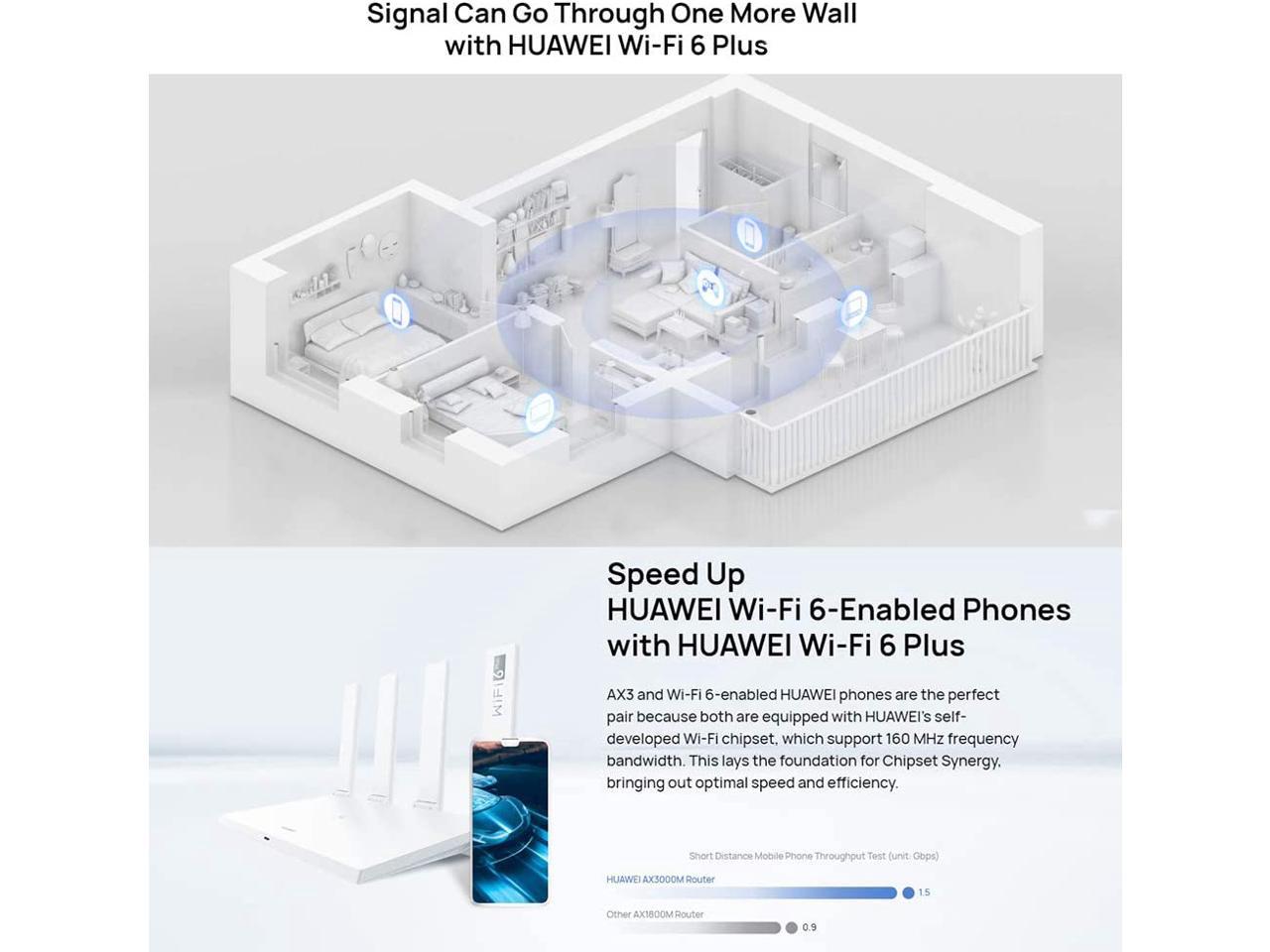 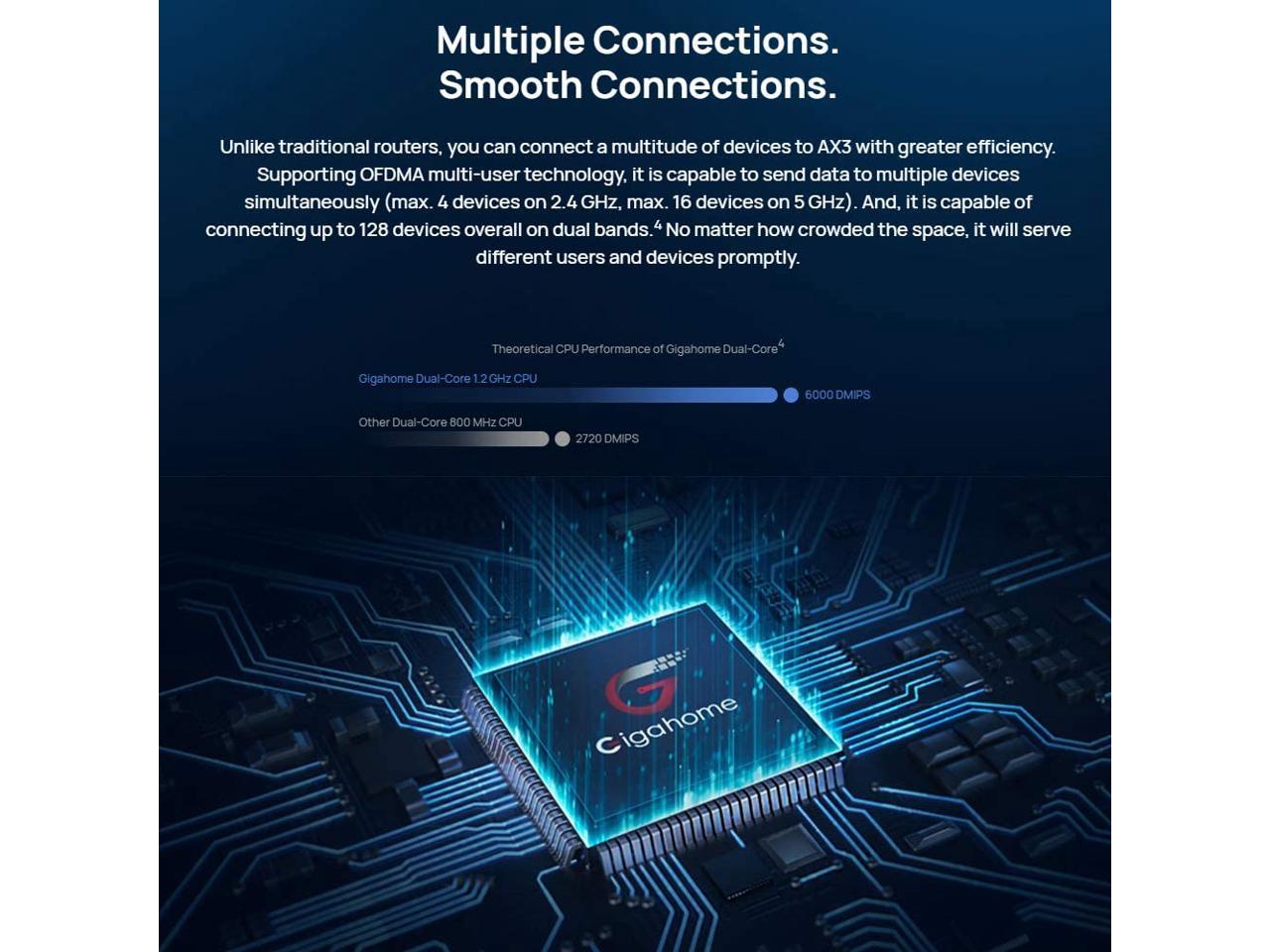 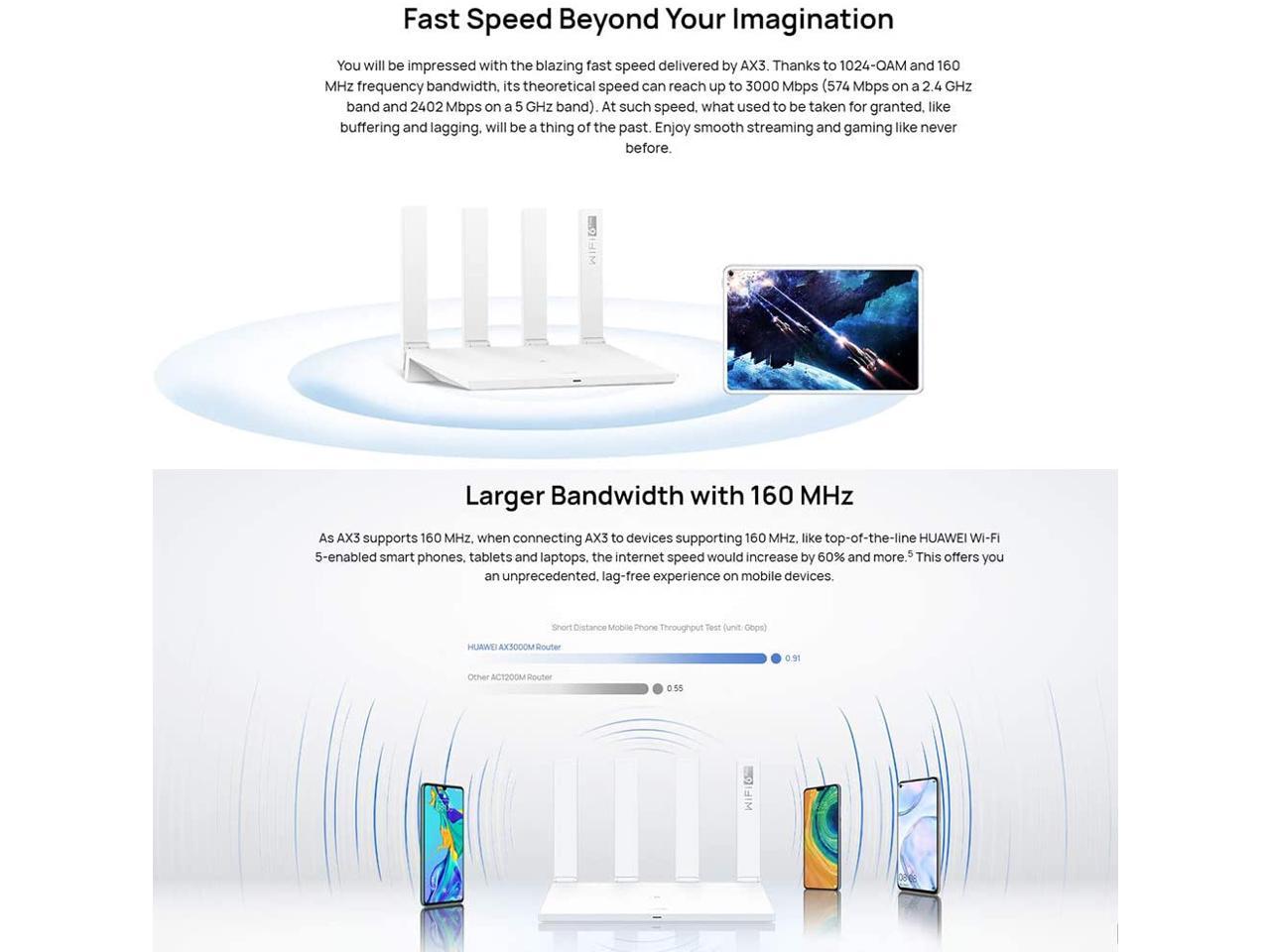 Arm your home network with next-generation Wi-Fi 6 with HUAWEI WiFi AX3 wireless router. It brings all the benefits of Wi-Fi 6 technology, including super-fast speeds, high capacity, low latency, and more. When paired with Wi-Fi 6 enabled HUAWEI phones, it will give you even faster speeds of up to 3000 Mbps,1 stronger signals, and more stable connections.

Usher in the Era of Wi-Fi 6

Wi-Fi 5 is the standard used by most devices today, while Wi-Fi 6 (802.11ax) is the new standard that's gradually coming into smart devices in recent years. Wi-Fi 6 has made several improvements over Wi-Fi 5 to cope with the increasing demand for faster and more efficient Wi-Fi.

Wi-Fi 6 allows you to enjoy faster response when connecting to multiple devices.2

Take a Step Further with HUAWEI Wi-Fi 6 Plus

AX3 and Wi-Fi 6-enabled HUAWEI phones are the perfect pair because both are equipped with HUAWEI's self-developed Wi-Fi chipset, which supports 160 MHz frequency bandwidth. This lays the foundation for Chipset Synergy, bringing out optimal speed and efficiency.

HUAWEI Wi-Fi 6-enabled phones are able to send 6dB stronger signals back to AX3 in stable, 2 MHz narrow bandwidth using Dynamic Narrow Bandwidth technology, which is based on Chipset Synergy. The wireless signals can penetrate solid objects like walls and floors easily. This means that the phone will have good reception of the Wi-Fi signal even when connecting from upstairs or somewhere far from the router.

Fast Speed beyond Your Imagination

You will be impressed with the blazing fast speed delivered by AX3. Thanks to 1024-QAM and 160 MHz frequency bandwidth, its theoretical speed can reach up to 3000 Mbps (574 Mbps on a 2.4 GHz band and 2402 Mbps on a 5 GHz band).1 The quad-core Gigahome CPU allows AX3 to best unleash its speed. At such speed, what used to be taken for granted, like buffering and lagging, will be a thing of the past. Enjoy smooth streaming and gaming like never before.

Unlike traditional routers, you can connect a multitude of devices to AX3 with greater efficiency. Supporting OFDMA multi-user technology, it is capable to send data to multiple devices simultaneously (max. 4 devices on 2.4 GHz, max. 16 devices on 5 GHz). The highly powered quad-core Gigahome CPU also ensures smooth running of the processor. And, it is capable of connecting up to 128 devices overall on dual bands.4 No matter how crowded the space, it will serve different users and devices promptly.

As AX3 supports 160 MHz, when connecting AX3 to devices supporting 160 MHz, like top-of-the-line HUAWEI Wi-Fi 5-enabled smart phones, tablets and laptops, the internet speed would increase 60% and more.5 This offers you an unprecedented, lag-free experience on mobile devices.

Huawei Share6 allows you to connect AX3 to your smart phone with a simple tap. Whether throwing a home party or celebrating festivals with friends and families, this router will remember the password for you and let the guests you trust, connect to it easily.

Protect Your Network with Huawei HomeSec

Enabled by TEE (Trusted Execution Environment) and Microkernel, AX3 offers a secure area inside its main processor, where both software and hardware are used to protect the data. It is also CC EAL5 certified, meaning it could operate safely in a commercial environment, offering great security assurance to your devices.

1.This is the theoretical maximum speed of HUAWEI WiFi AX3. Actual speed may vary depending on the environment and devices.

3.Data from HUAWEI lab, by comparing HUAWEI WiFi AX3 with other Wi-Fi 6 router. The signal sent back to AX3 is 6dB stronger, which allows it to pass through one more wall.

7.Huawei routers should have an H button.