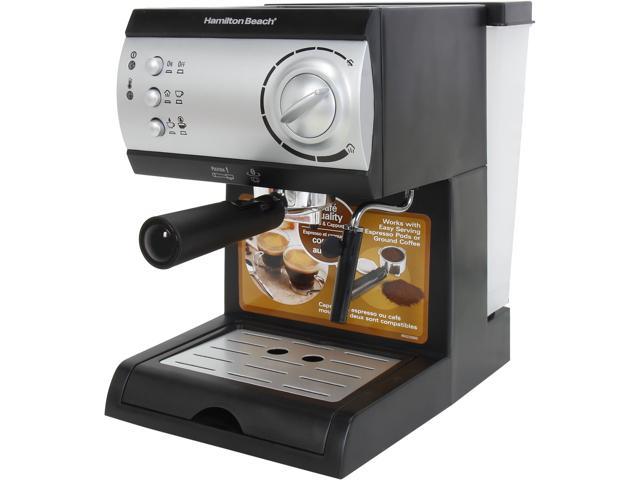 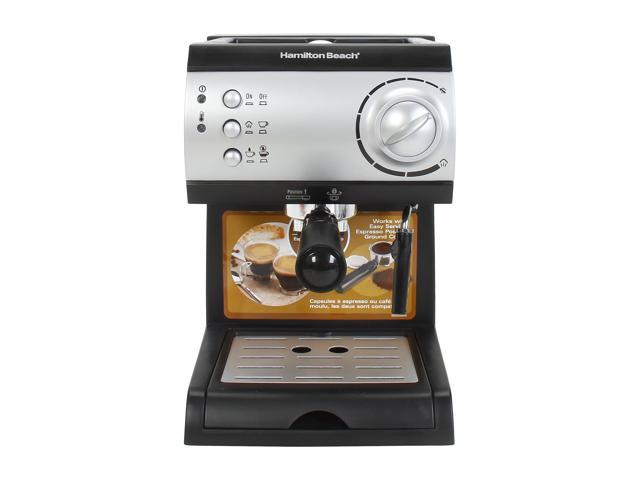 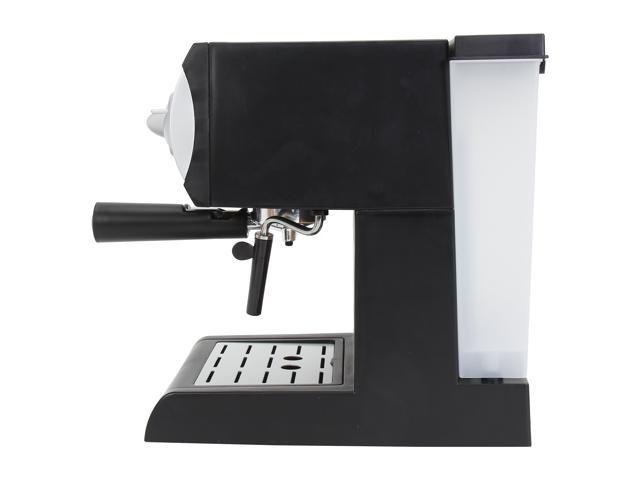 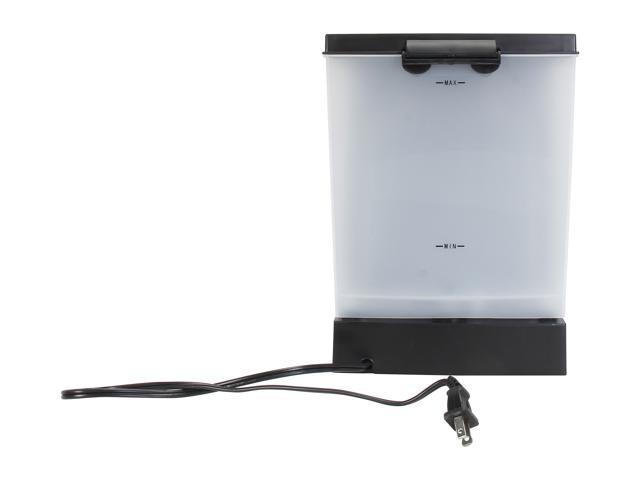 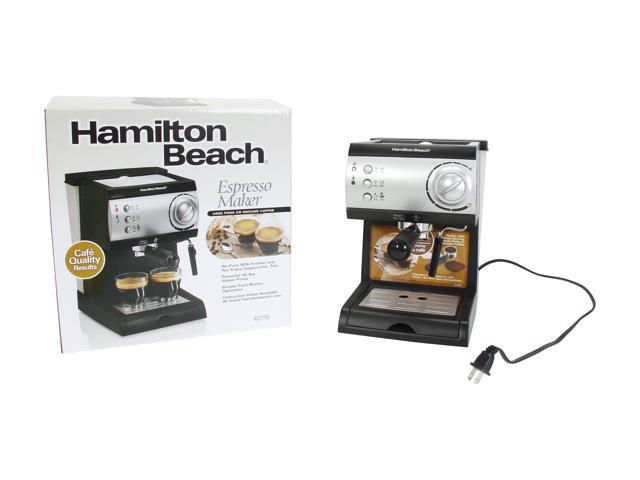 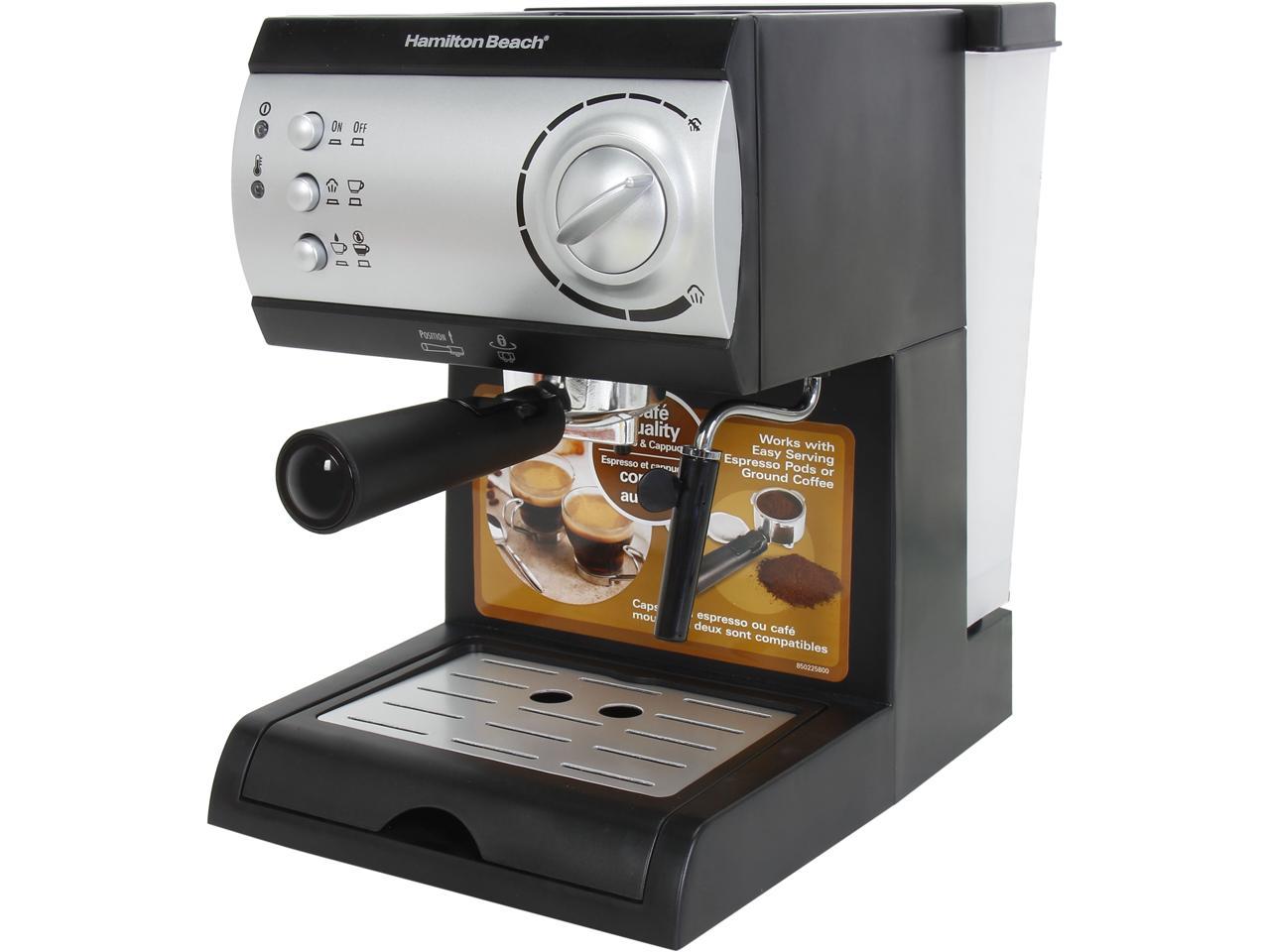 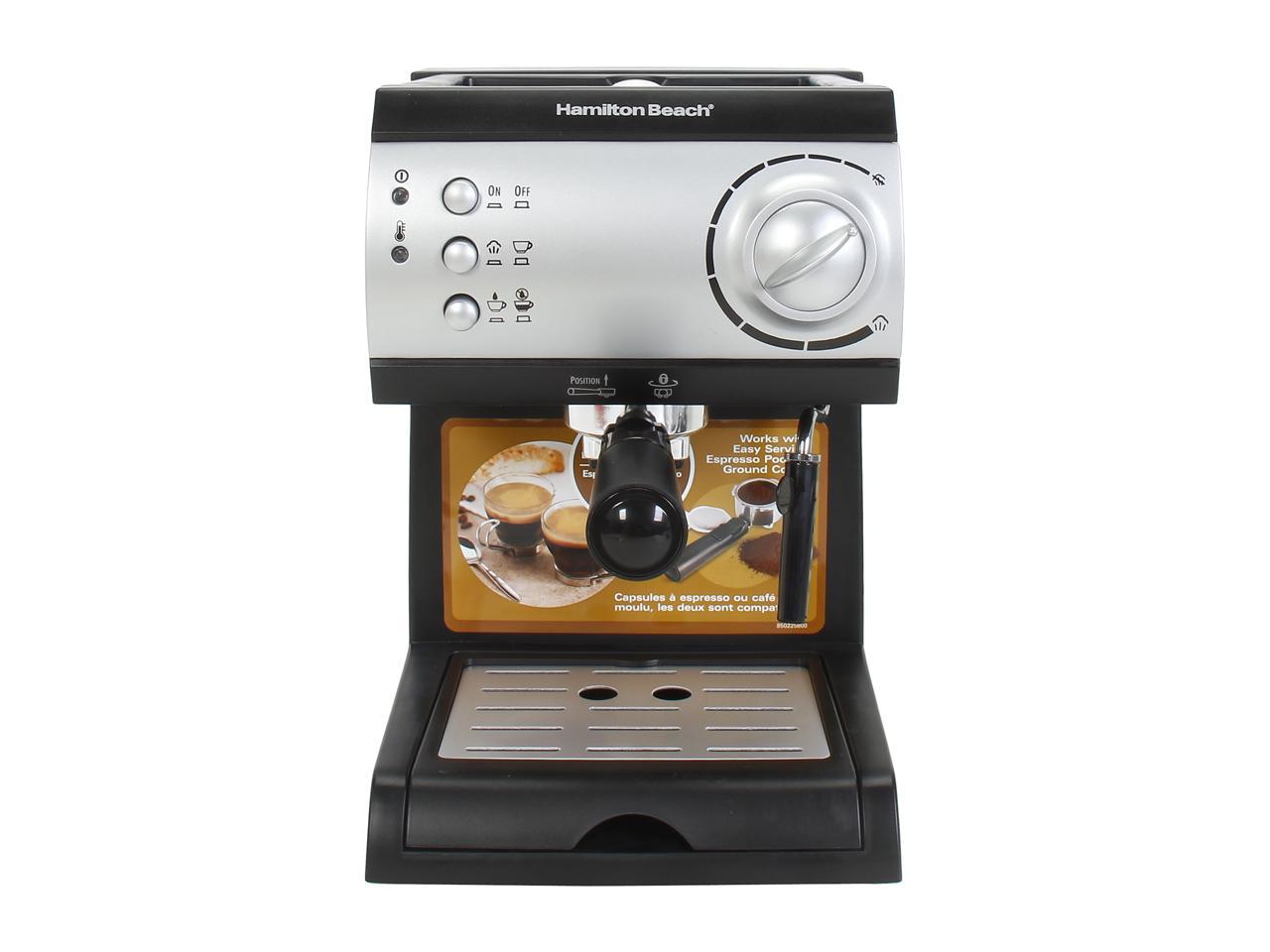 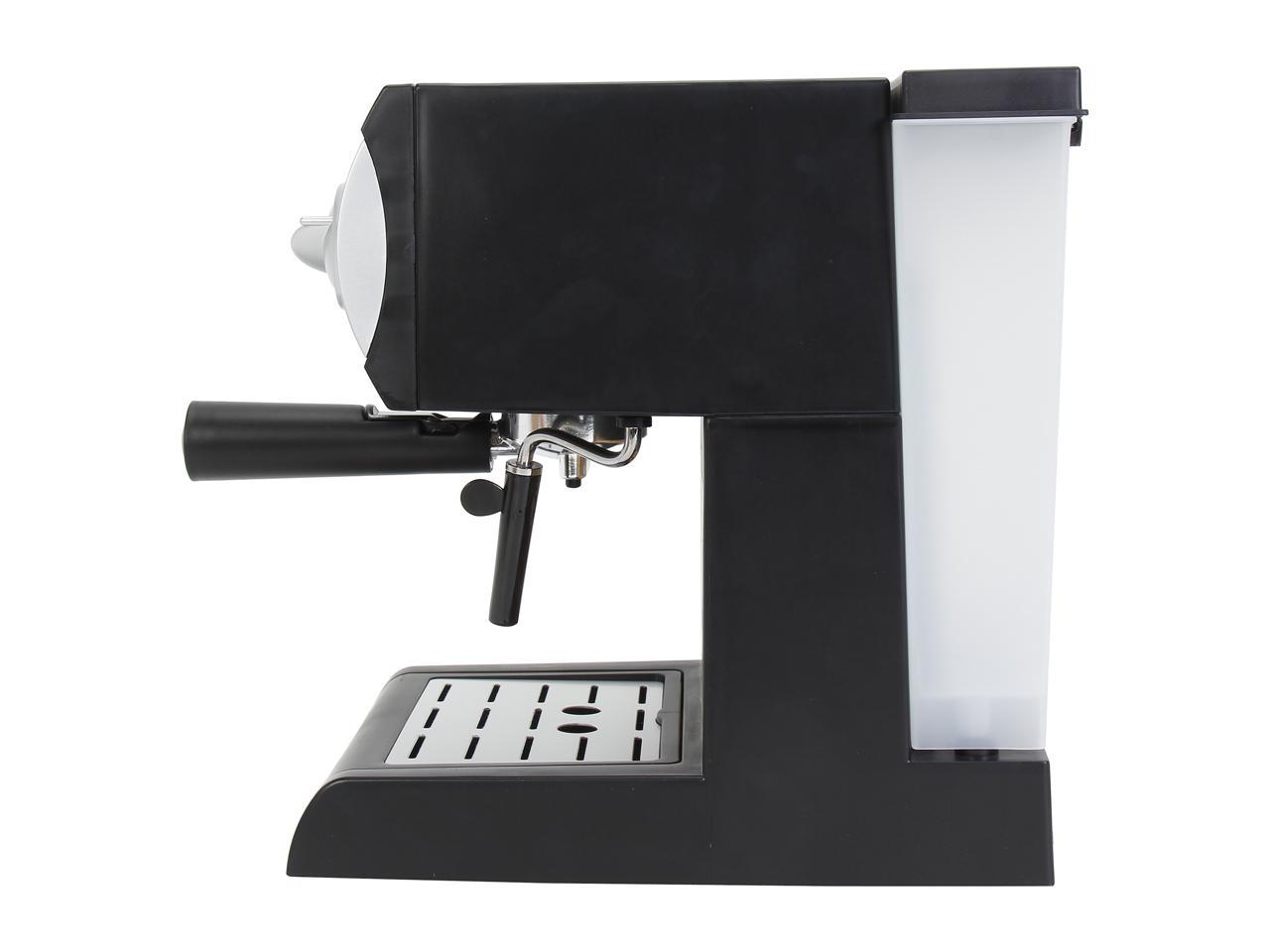 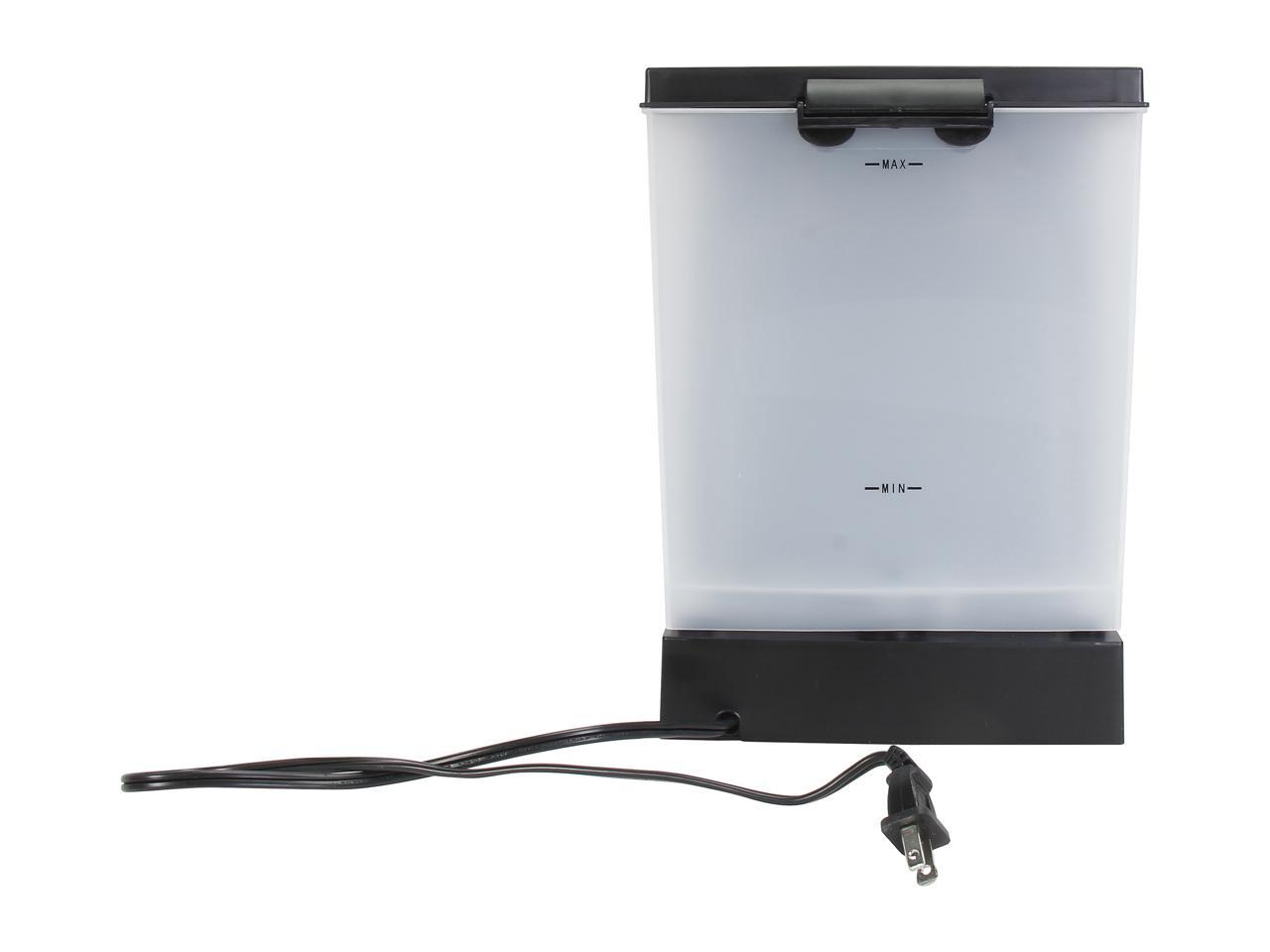 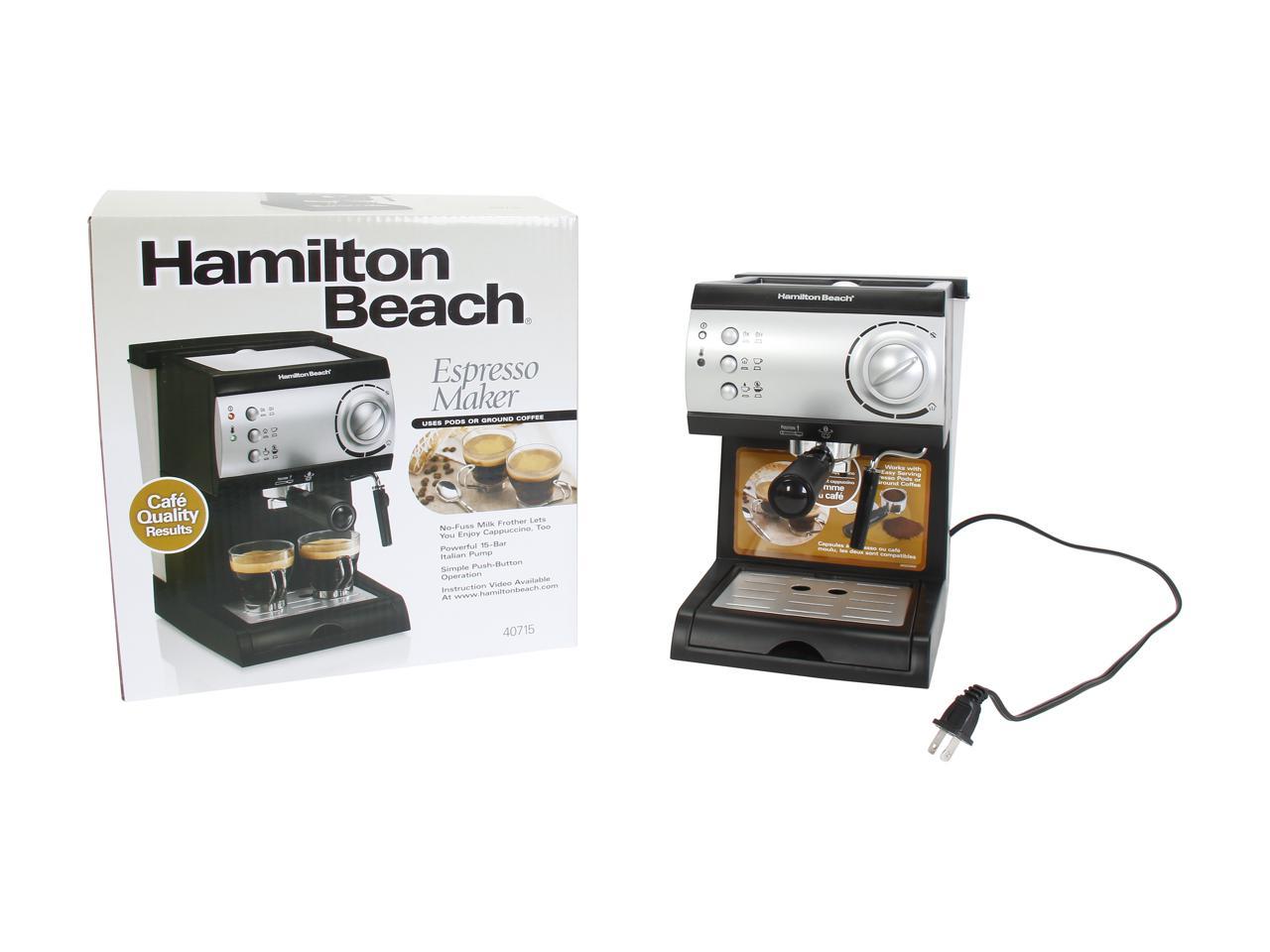 Learn more about the Espresso Maker

Pros: This machine is much quieter than the machine it replaced (a 10 year-old machine from a well-known manufacturer), it makes very nice espresso. It heats up quickly for making espresso -- and it heats up to steaming temperature quickly too, which is nice when you want to add steamed milk to your already-made espresso. Finally it makes GREAT steamed milk. Not only does it bring the milk up to temperature much faster than my older machine, but it does a great job frothing the milk, so you get a really nice head of foam.

Cons: The cup holding the ground espresso is unforgivingly exact. I use the same 1 tbsp scoop that I used with my older machine, but the older machine held a bit more than 2 Tbsp of coffee in the cup -- so I could put in two scoops of coffee and it would not spill over onto the counter. With this machine, the same two Tbsp of coffee into the cup leaves a spillage of grounds on the counter as I'm tamping it down. I've been using the machine for more than a month, now, and I still make a mess unless I put in less than 2 full scoops of espresso grind. That said, though, even if I put in slightly less than 2 Tbsp to keep my counter clean, the espresso still tastes great. So maybe it's user error more than a design flaw. Still, slightly more capacity in the cup would not hurt. The other slight con is this: There's a seal somewhere in the system that's not as tight as it could be, so when I'm steaming milk I'm still getting a residual drip from the espresso spout itself. Not a deal-breaker, but it makes a bit of a mess if there's no cup beneath the spout to catch the water/coffee that drips out. If Hamilton Beach had made the base below the drip-head in black rather than brushed chrome, that drip mess would be far less noticeable. But, because it's brushed chrome I always see the mess and have to clean up that much more after making a latte or something else involving steamed milk.

Overall Review: My other experience is this: A month after I purchased the machine I found it to be running a bit rough and it seemed as though it was not producing enough pressure to press the water through the grounds to produce a full 2 oz of espresso. The machine was just laboring and laboring and no water was coming through. I thought maybe I was packing too much coffee in the cup (trying to get that full 2 Tbsp packed in there), but I was actually using the same amount of coffee and using the same grind I'd always used. It just wasn't pushing the water through as effectively. I was on the verge of sending the machine back, thinking that it was just dying for some unknown reason, but before I did that I decided I'd take apart the head where the grounds-cup connects to the main part of the machine and just see if it needed cleaning. I undid the screw that attaches the round plate, pulled out the spring and the pin, and then ran water through the system for a few cycles. Some gunk came out of the pipes when I did that, but as soon as I put it all back together everything began to work beautifully. Since then, the machine has worked like a champ. I don't know if this was just gunk left in the line from manufacturing or what. I'm glad that it's gone and that this machine now meets all my expectations (and, really, it does), but it was annoying to have to perform that level of cleaning after only a month (and not even a month of heavy use). Bottom line is this: you can spend hundreds of dollars more to get a fancy espresso machine, and you may be put off by this one, thinking you'll get something vastly inferior because you've paid so much less. But, if you take the time to get this one working properly, you will NOT be disappointed. This one is powerful, relatively quiet, a great steamer, and makes a sweet cup of espresso, but you may have to tinker with it to get it to be the machine it can be. If you'd asked me a month into owning this whether I'd buy this again, I'm not sure I would have said yes. Having owned it now for around 3 months and worked out the kinks, I'd say yes, I'd definitely buy it again.

Pros: -Easy to use -Warms up very quickly -Brews a great cup(s) of espresso -Crema is plentiful with this unit -Easy to clean -Looks good on the counter top

Cons: Steaming Milk is quite loud, but I don't think this would be avoidable no matter the make or model.

Pros: LOOKS GREAT, DOES A GREAT JOB, COFFEE AND ANYTHING ELSE TASTE GREAT NOW

Cons: Doesn't come with a carafe or cups, but I had a spare. doesn't give any measurement of how much espresso it can make until the beans need to be replaced.

Cons: The box, manual, web picture etc never points out the fact that it does not come with the glass espresso cups. My girlfriend really enjoyed the machine, but the fact that she has to go out and buy small cups for it really annoyed her, and frankly, made me question why newegg doesn't point that fact out on the product's page. Buyer beware, if you buy this as a gift you will also need to buy the glassware separately.

Overall Review: If I had known that it would not include everything pictured, I would have gone out and purchased some cups.

1 out of 15 people found this review helpful. Did you?