OUT OF STOCK
Sold by: Newegg
Shipped by Newegg
Price Alert
Add To ListFound on 28 wish lists 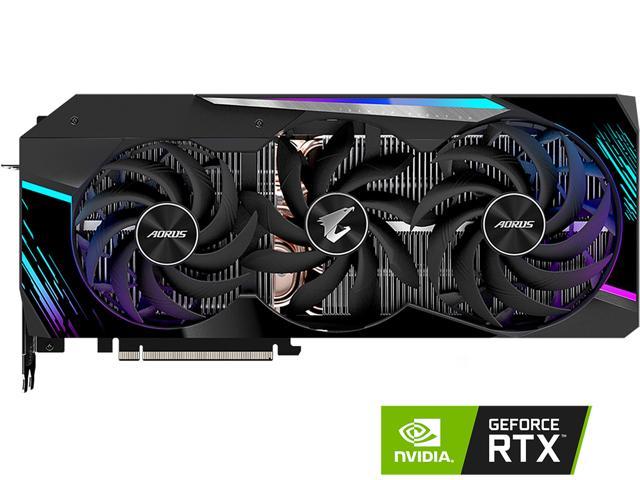 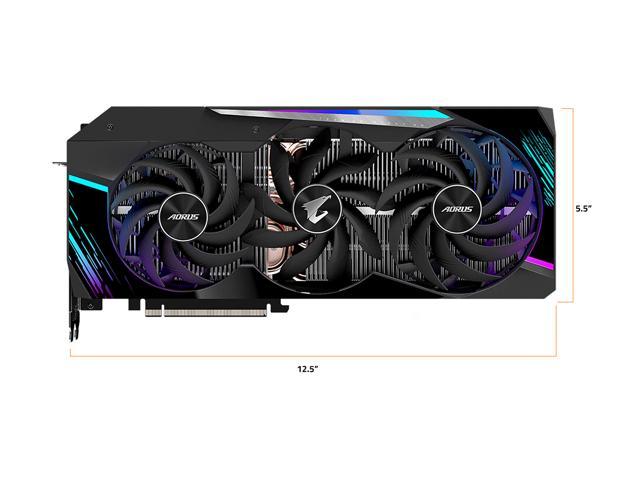 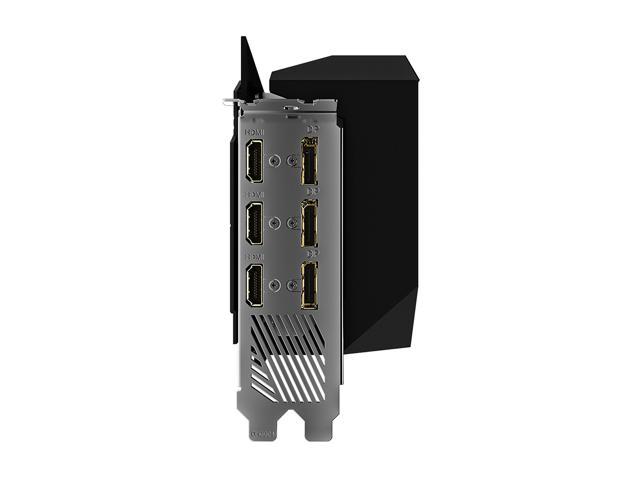 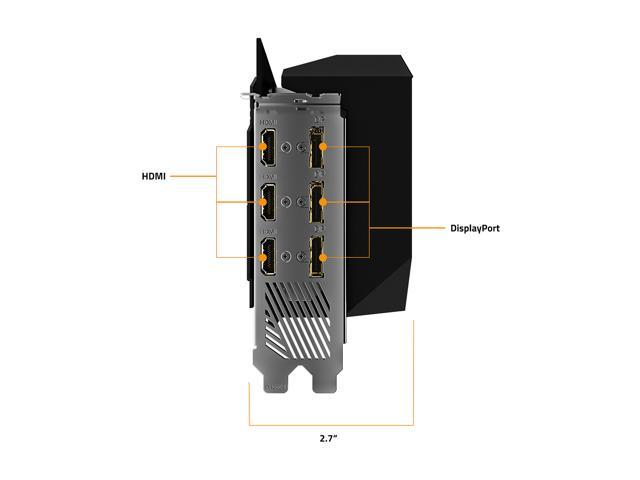 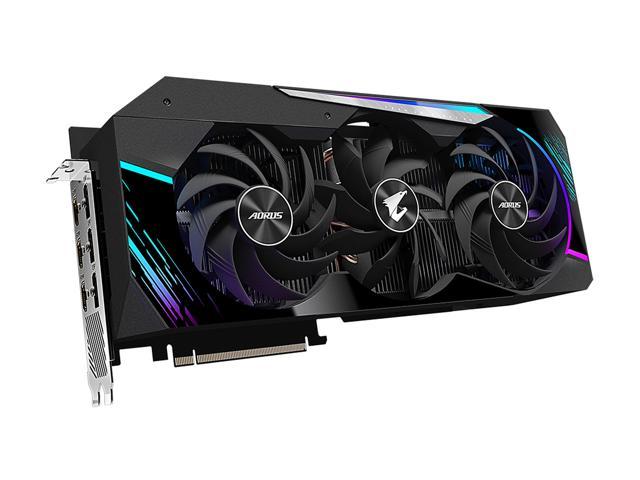 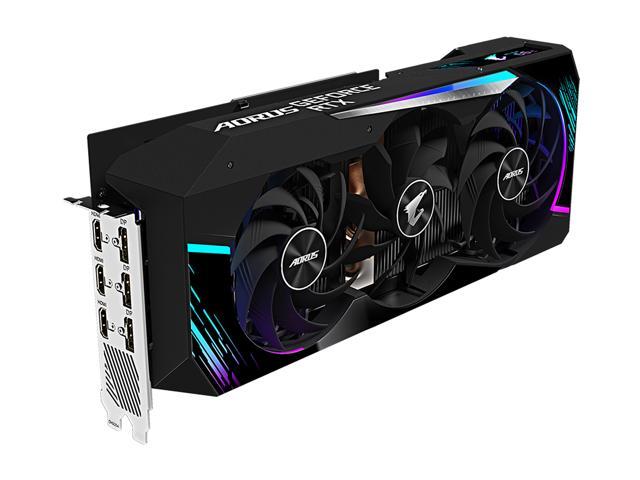 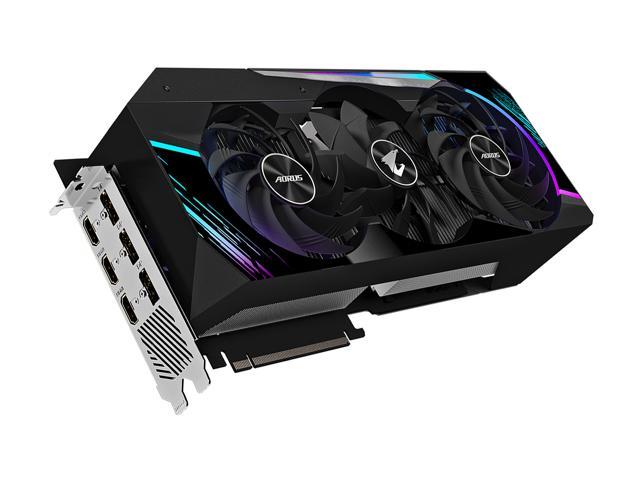 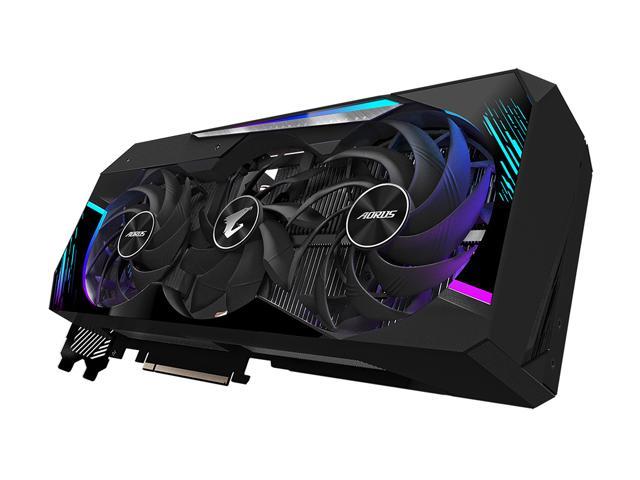 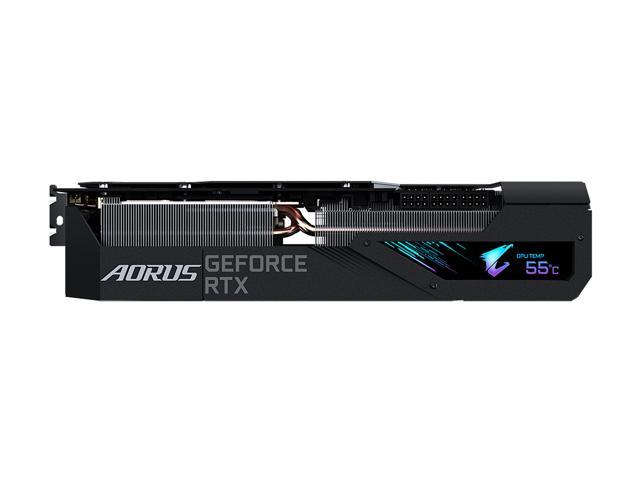 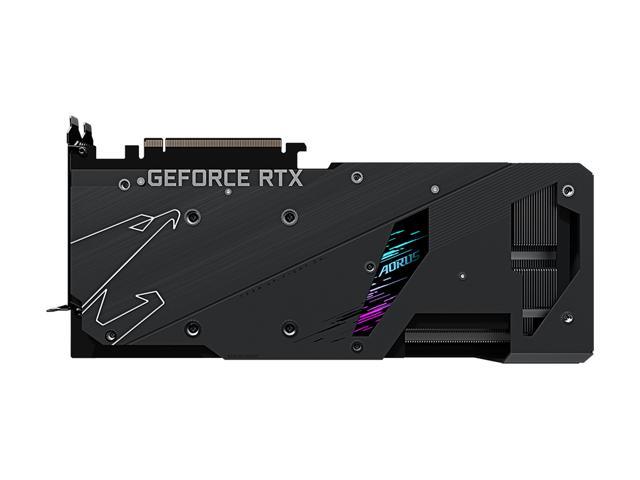 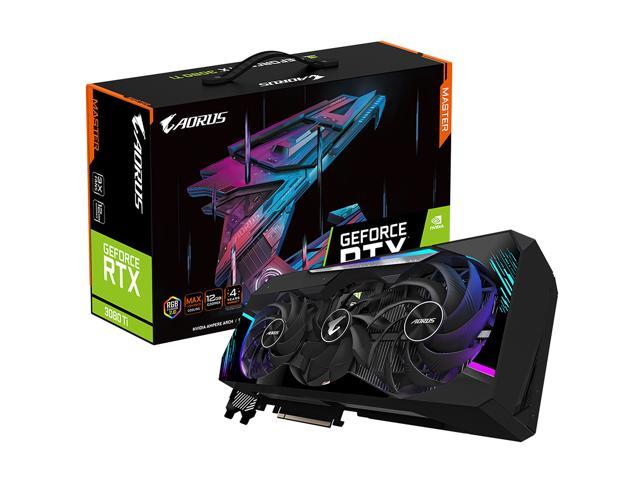 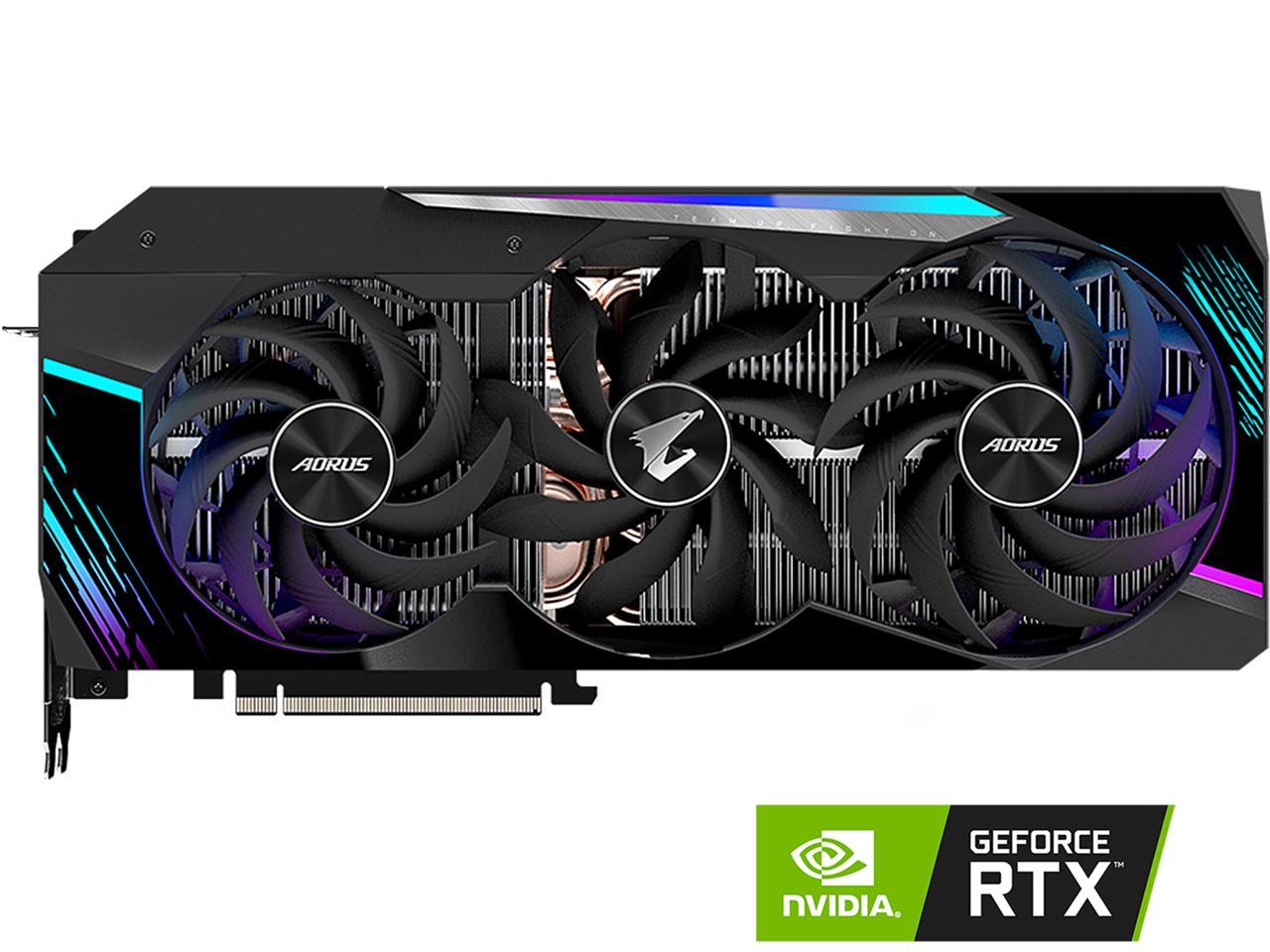 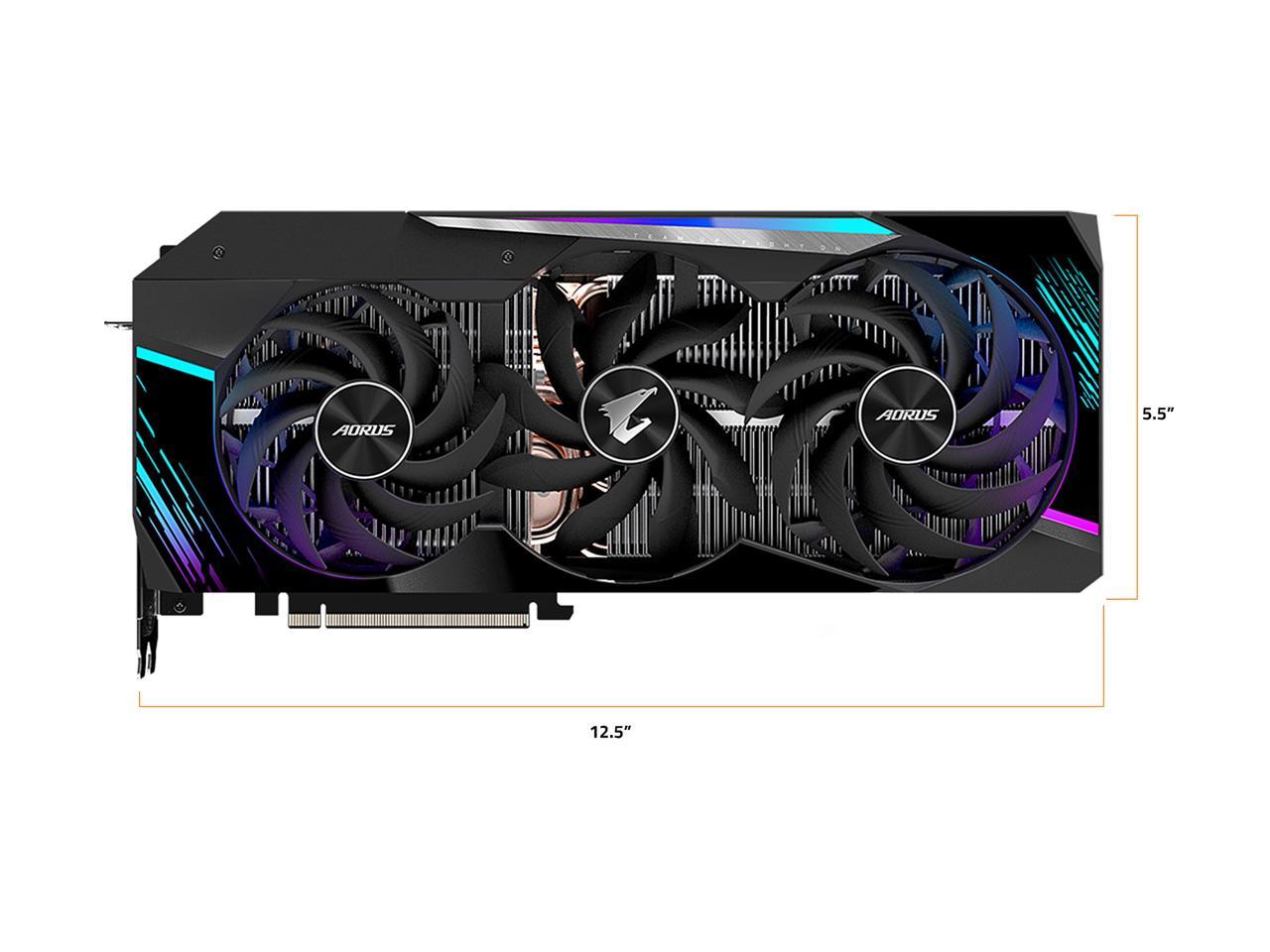 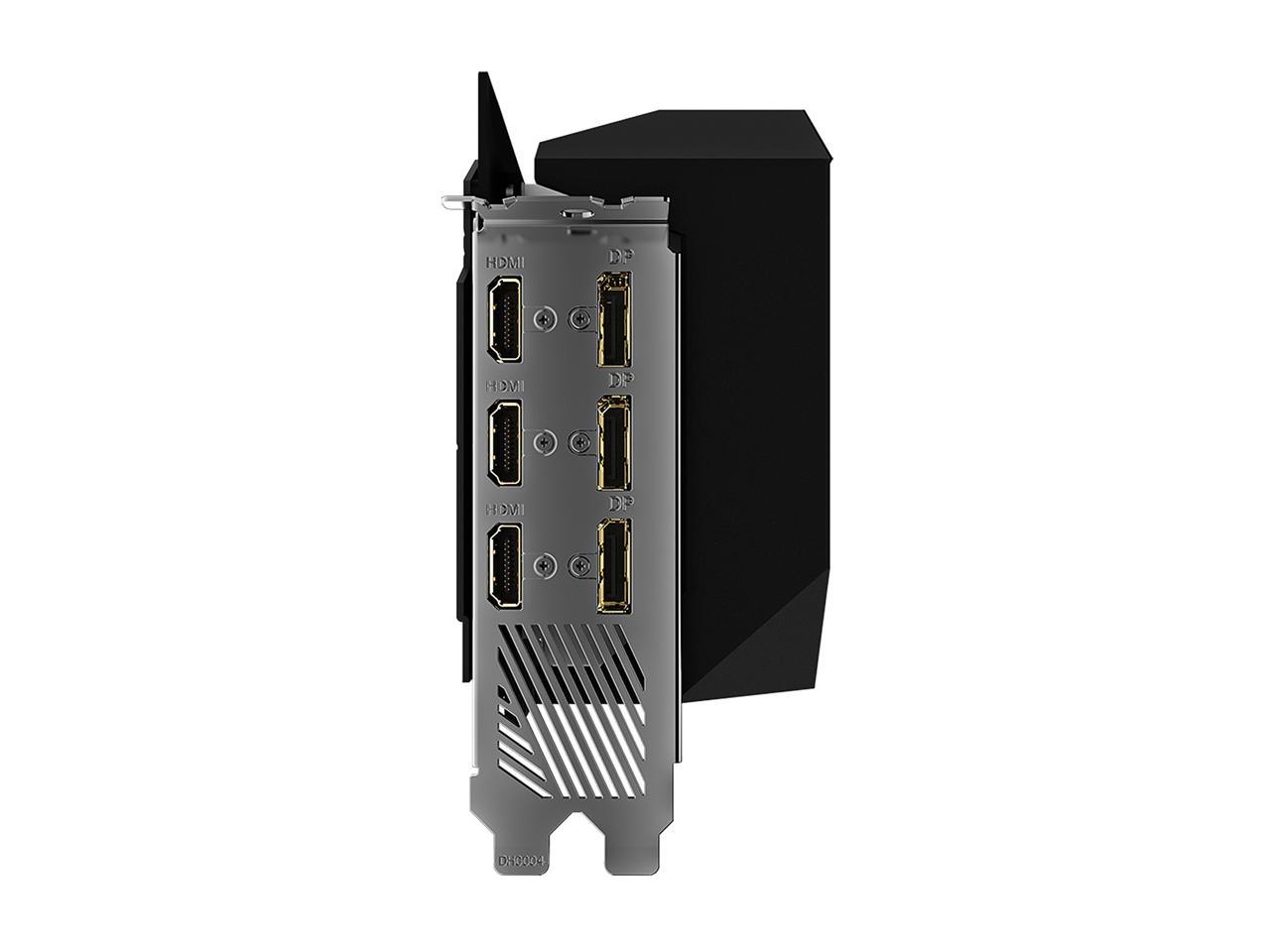 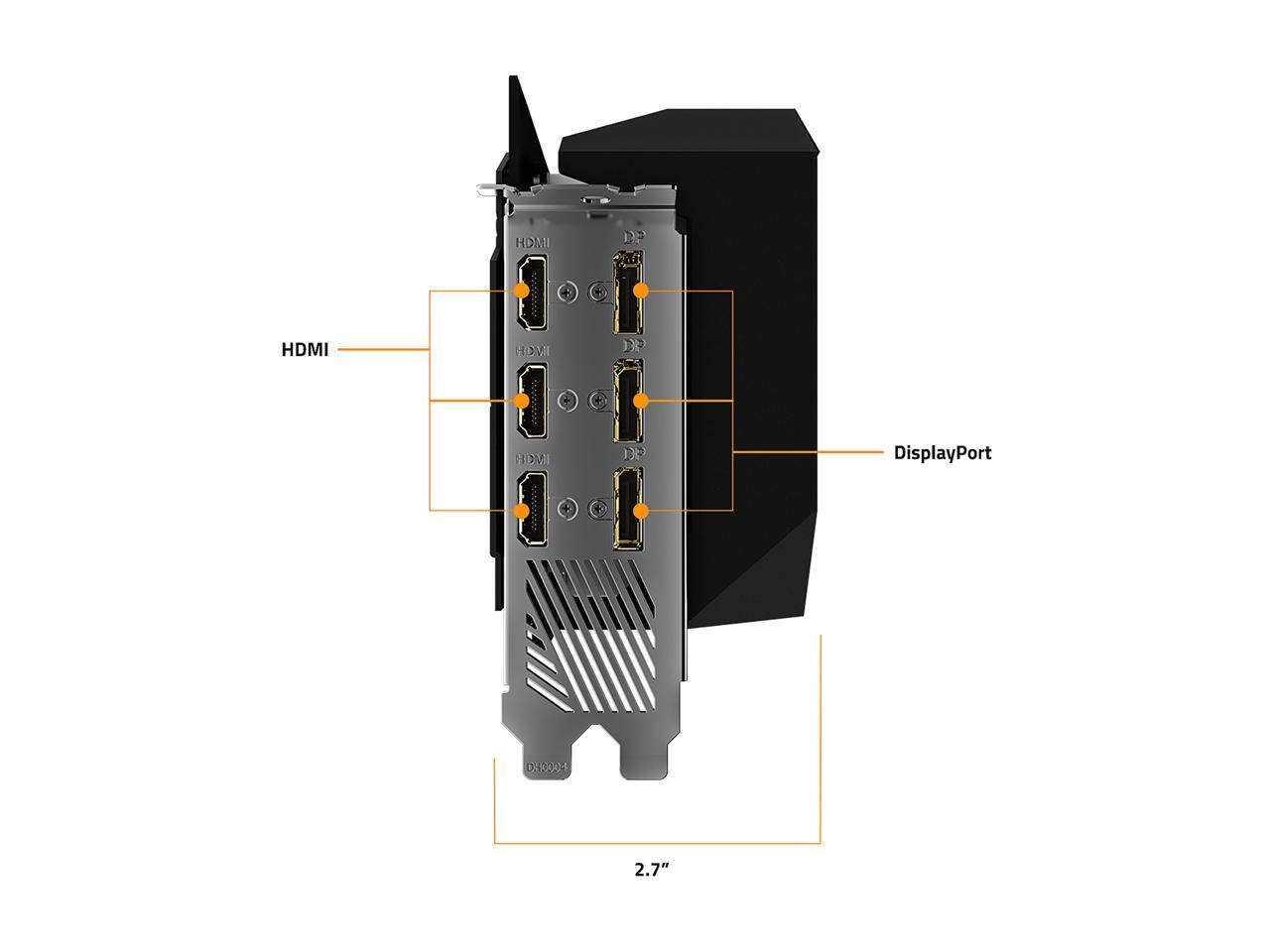 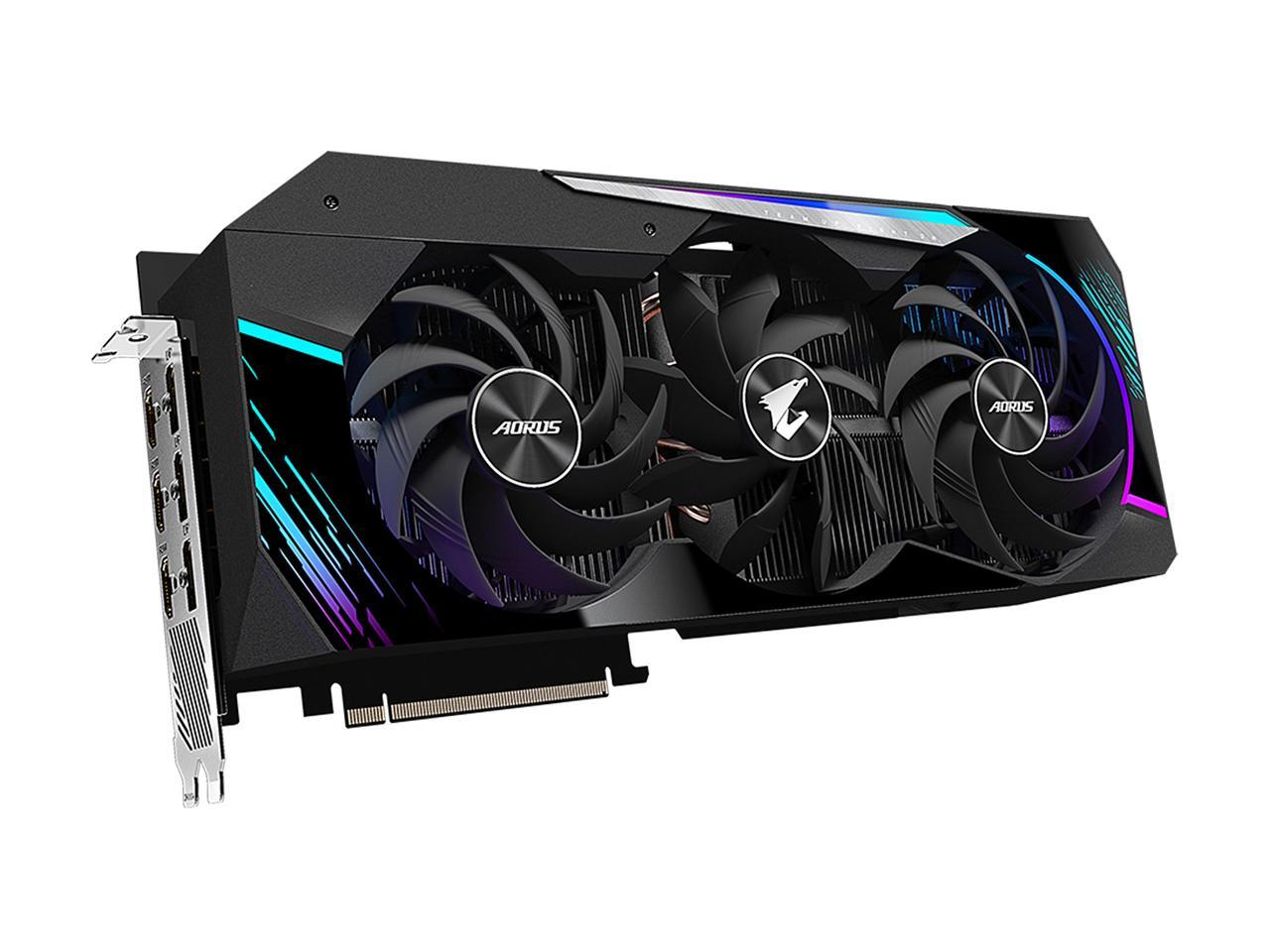 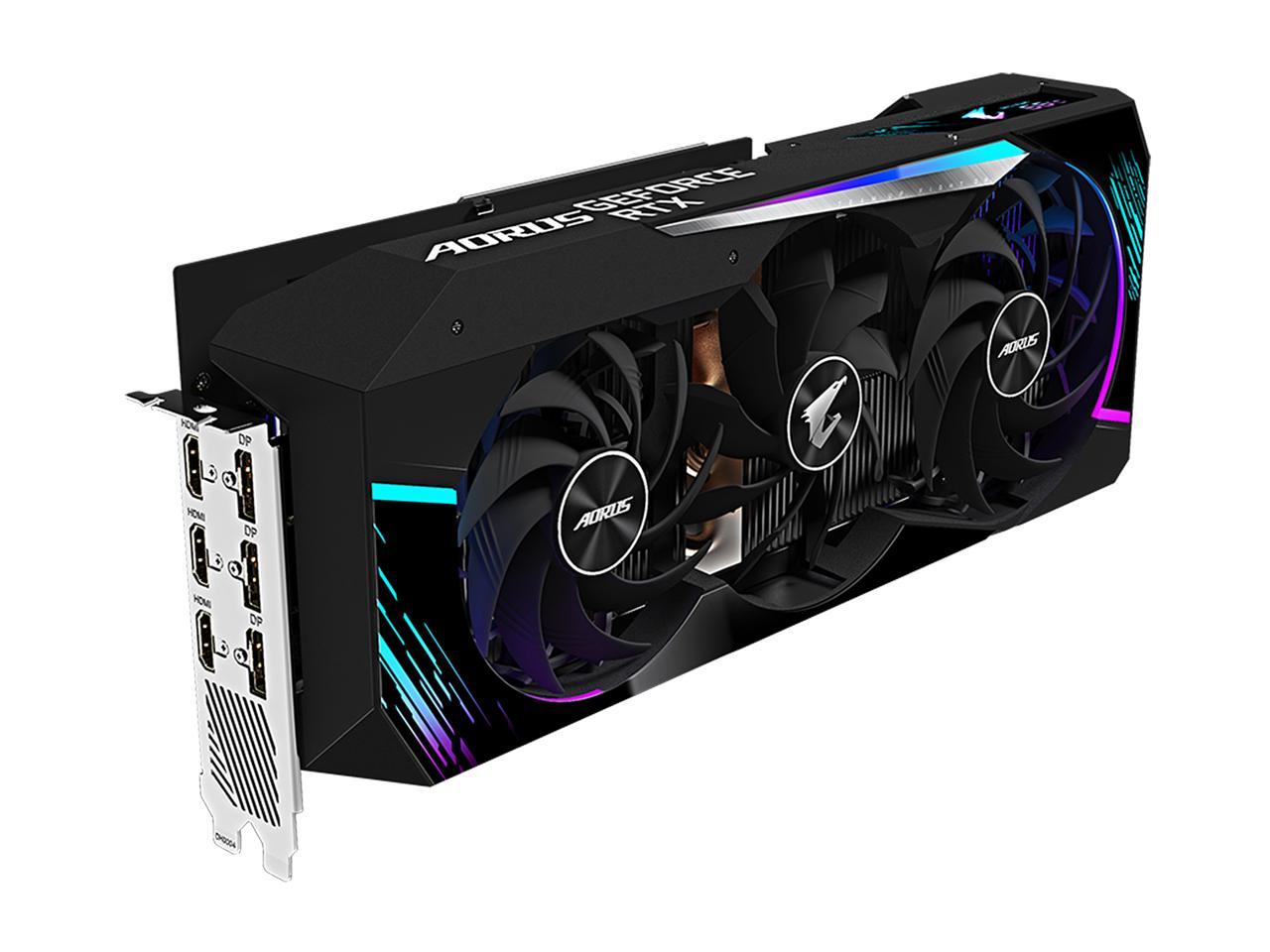 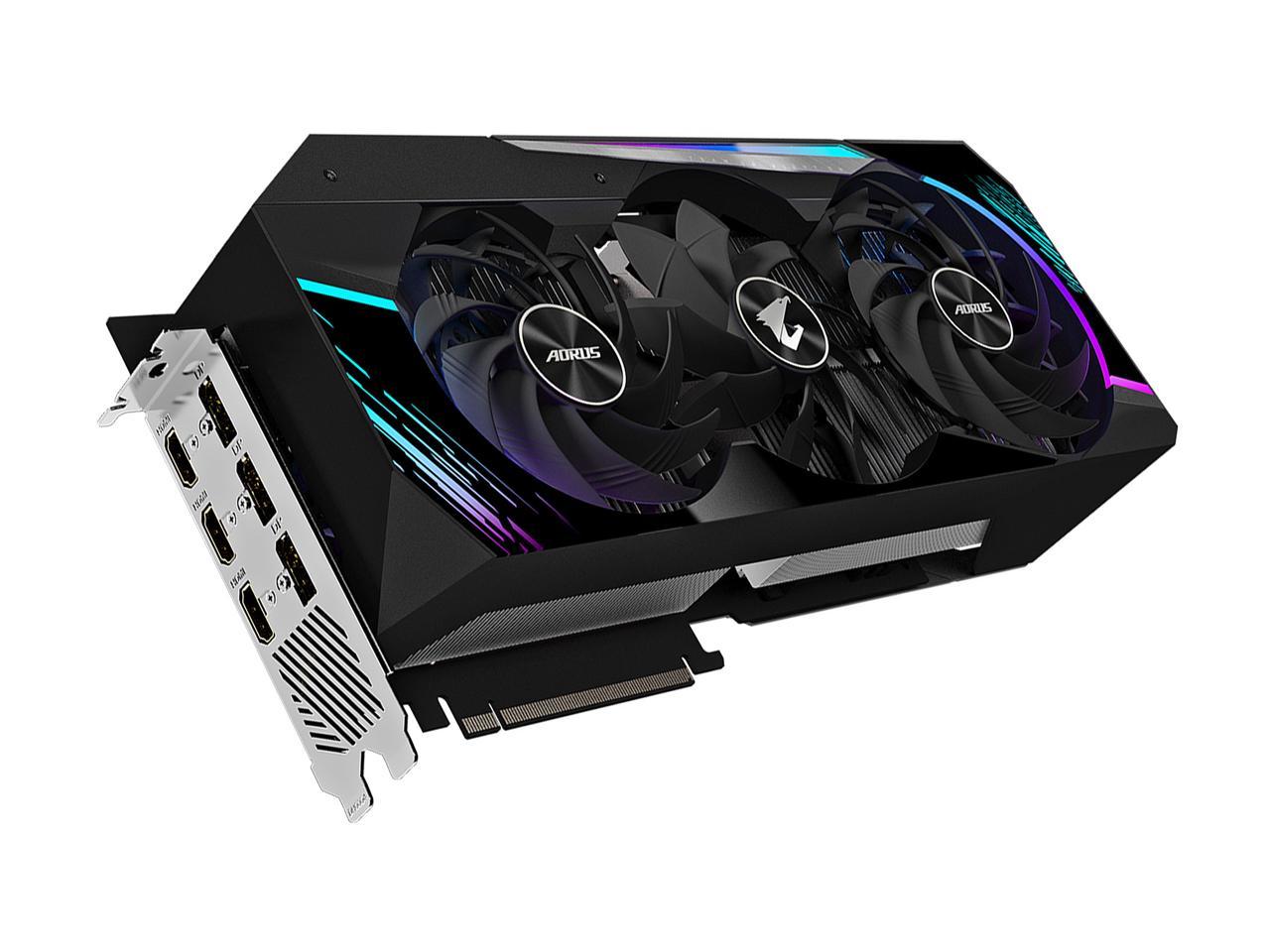 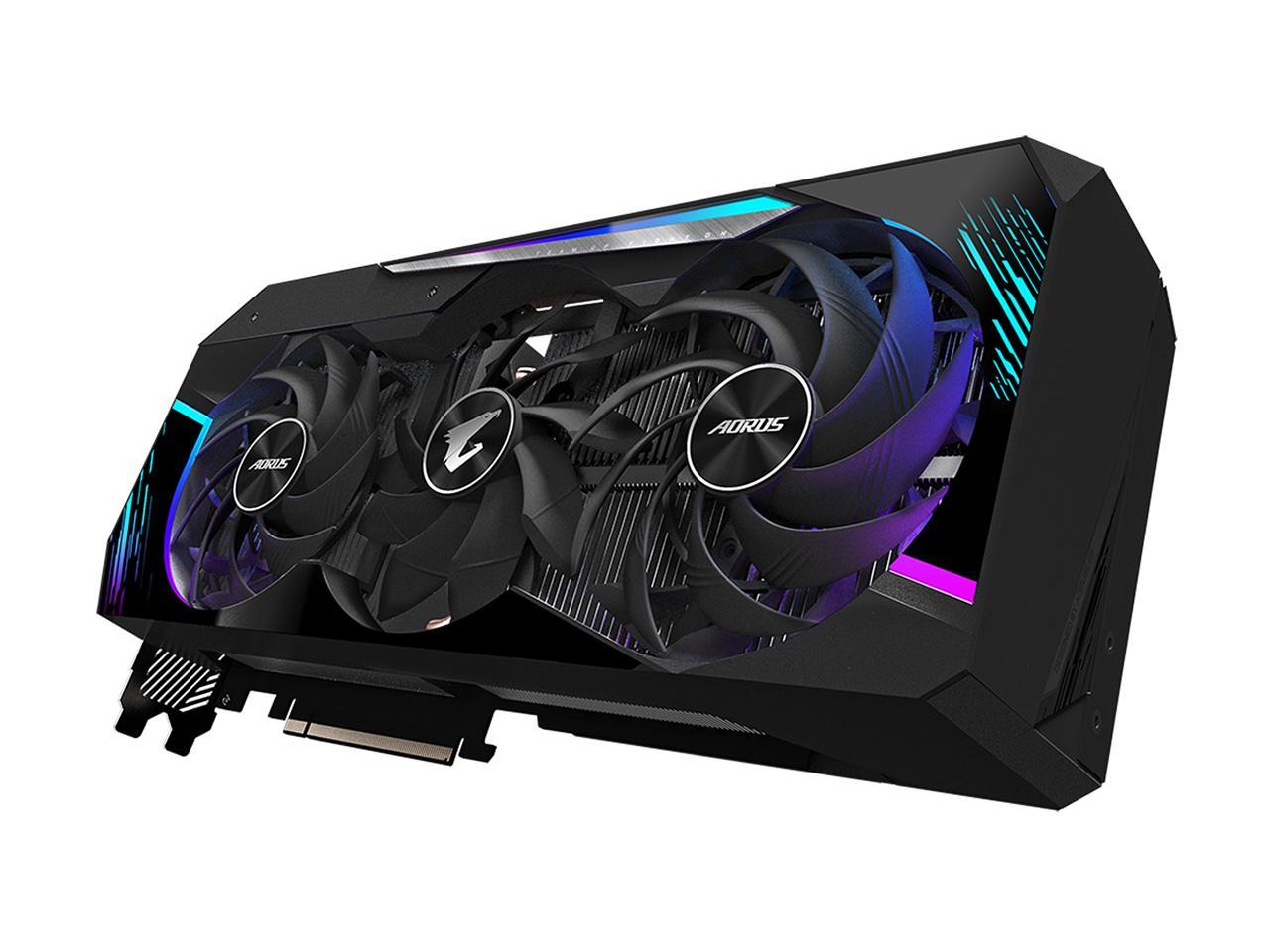 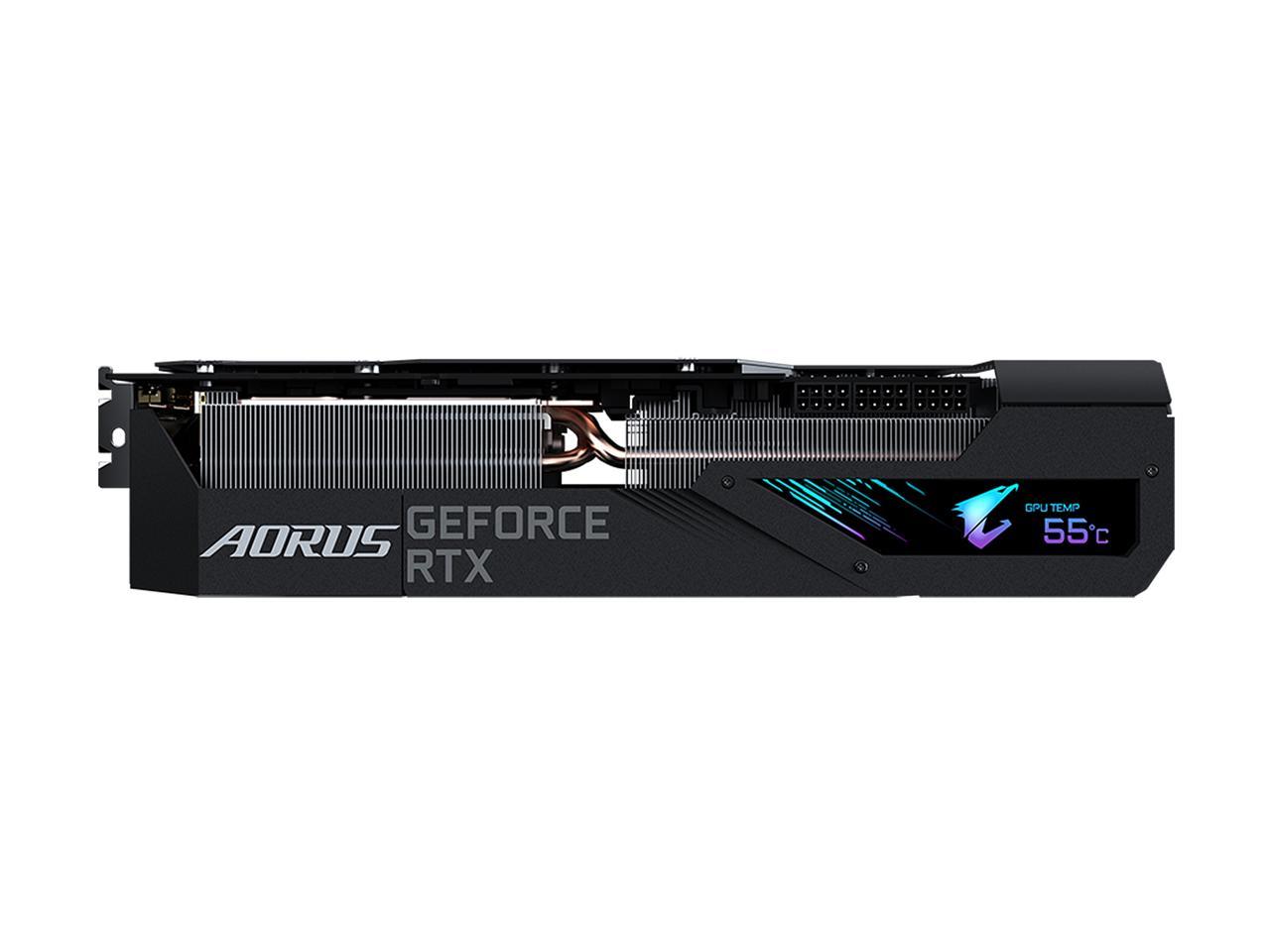 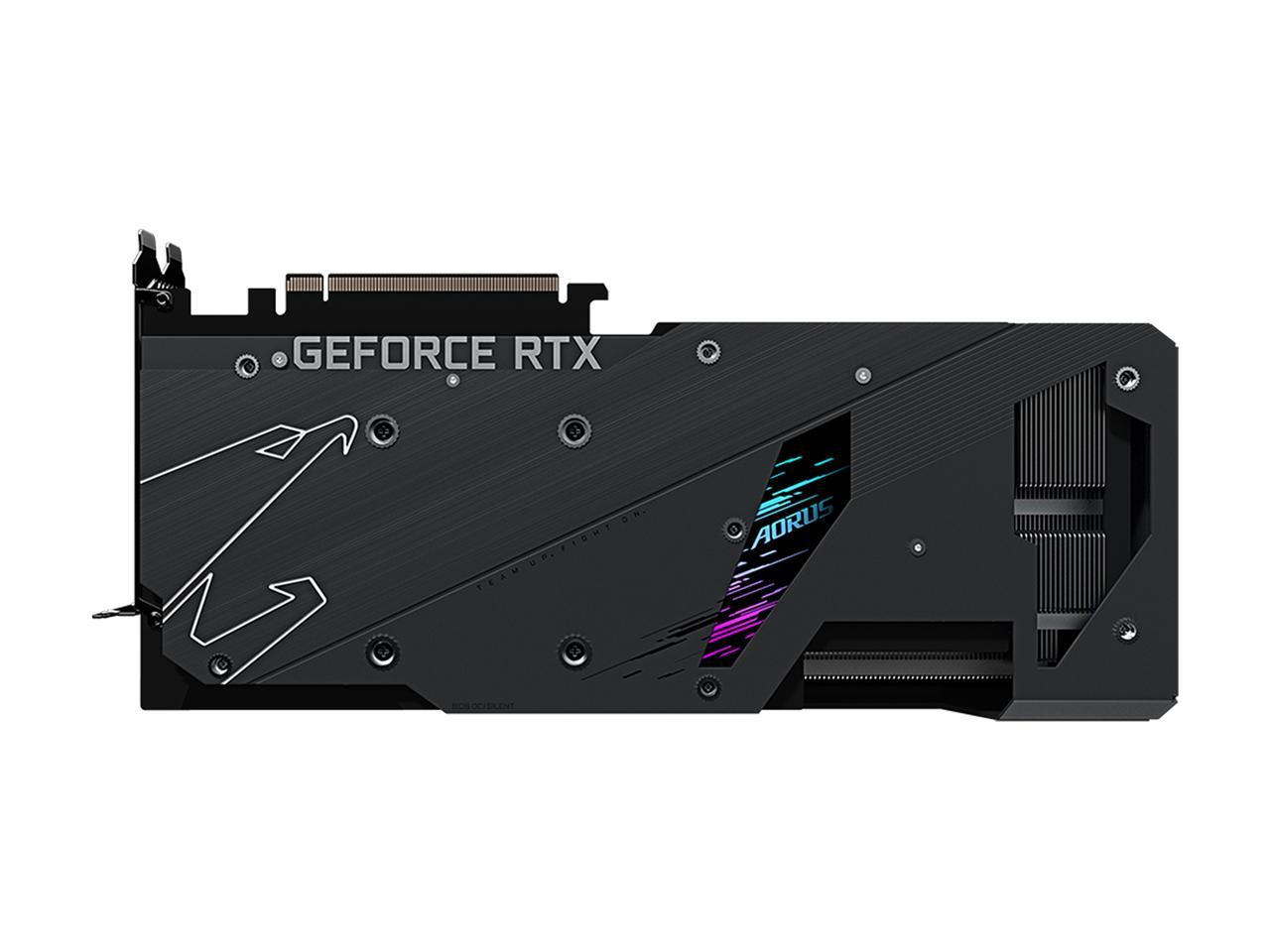 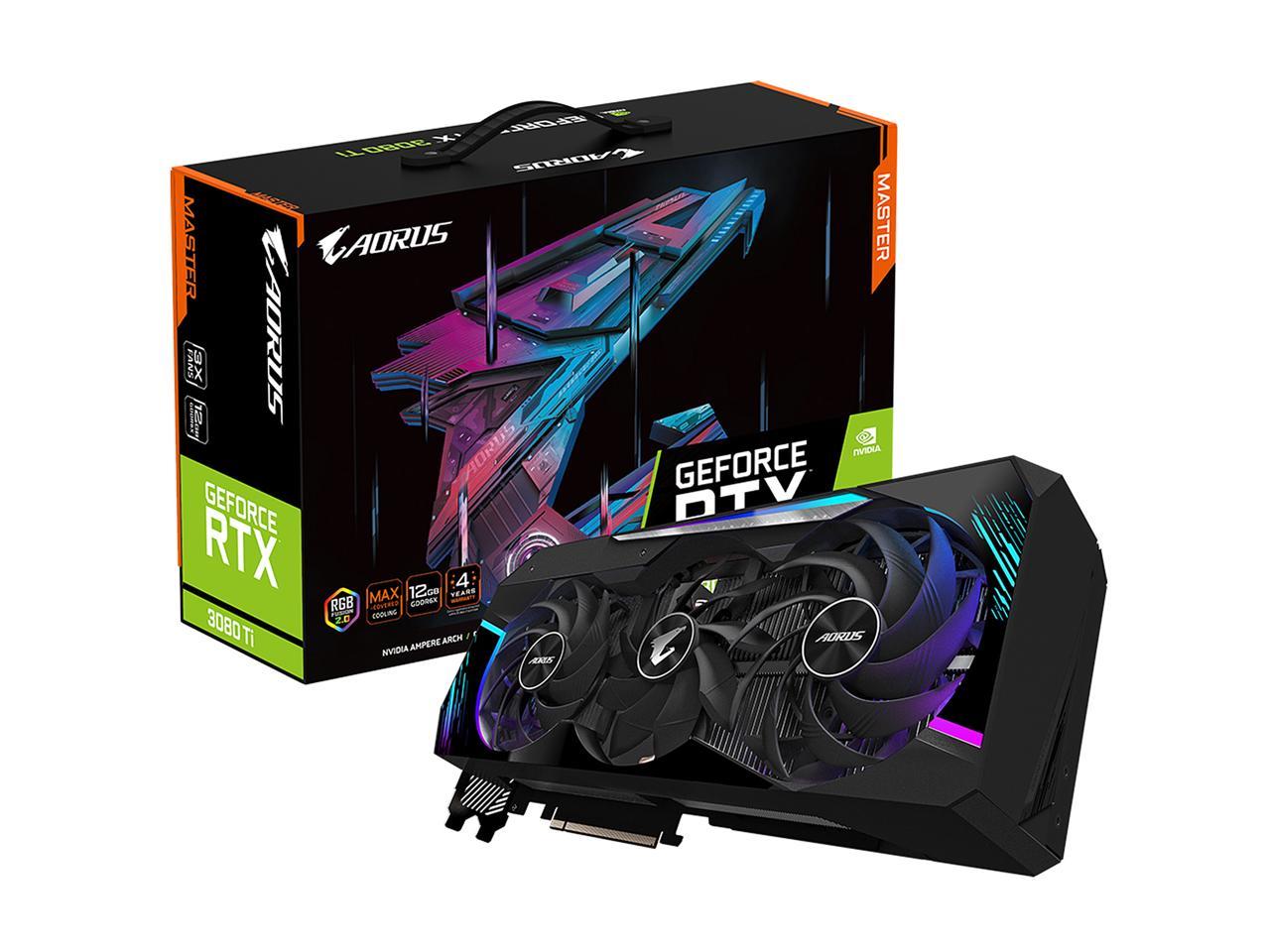 (50)(22) Write a Review
See more "rtx 3080"
OUT OF STOCK.
Fees for brokerage and duty included in price.
Overview
Specs
Reviews

In the AORUS dimension, everything is constructed digitally. The lighting and patterns are mapped onto the products with an efficient, free flowing style.
Welcome to the Digital Code Era.

The MAX-Covered cooling features two 115mm and one 100mm unique blade stack fans with wind claw design and alternate spinning, so the air pressure can completely cover the heatsink.

The airflow is spilt by the triangular fan edge, and guided smoothly through the 3D stripe curve on the fan surface.

Reinforce and channel the airflow to completely cover the heat sink.

Reduce the turbulence of adjacent fans and increase air pressure.

With direct contact to the GPU and VRAM, the large vapor chamber combines the composite heat pipes to efficiently transfer heat generated from the interior cores to the heat sink.

The angular and unequal fins height can channel the airflow through the fins and enlarge the contact surface.

Various GPU and VRAM status such as temperature, clock, usage and fan speed can be selected for real-time monitoring.

Support jpg, bmp and png file types. You can crop the image to fit.

TEAM UP. FIGHT ON.

GeForce RTX 3080 Ti with 12 GB memory and 912 GB/s memory bandwidth has CUDA® Cores, 2nd gen ray tracing cores and 3rd gen tensor cores operating in parallel. It is the most suitable solution for those who are gaming, rendering, and developing A.I. technology.

The metal back plate not only provides an aesthetical shape, but also enhances the structure of the graphics card to provide complete protection.

Silent mode will provide a quieter experience. The mode switch requires a reboot to take effect. The default is OC mode.

You can choose 3xHDMI or 3xDP for your monitors without any adaptors. (Option 4 views)

When experiencing any power supply abnormality, the indicator will alert gamers by flashing light.

Excellent circuit design with the top-grade materials, not only maximizes the excellence of the GPU, but also maintains stable and long-life operation.

EXTREME
OVERCLOCKING
The graphics card uses the better power phase design to allow the MOSFET to operate at lower temperature, and over-temperature protection design and load balancing for each MOSFET.

FRIENDLY
PCB DESIGN
Fully automated production process ensures top quality of the circuit boards and eliminates sharp protrusions of the solder connectors seen on the conventional PCB surface. This friendly design prevents your hands from getting cut or inadvertently damaging components when making your build.

INTUITIVE
AORUS ENGINE
Clock speeds, voltage, fan excellence, power target can be monitored and tuned in real-time according to your own preference through this intuitive interface.

Cons: RGB Fusion 2.0 is useless. Dont buy it just for the RGB or LCD.

Overall Review: I might biased just because I was able to buy the darn thing (got lucky in the shuffle). It rips through games at 1440p (dont have a 4K monitor). 114 average RDR2 ultra with some extras turned up. Im running a 10900K with no OC. My Time Spy score went from 10,693 (2070 Super) to 18,964. Sustain boost clock is over 1.9G. Its huge, and is moderately loud when under full load. RGB Fusion 2.0 is garbage. Cant get it to recognize the card, so Im stuck with the stock rainbow RGB for the moment. Based on the internet, Im in no way alone on that front. I dont care that much about RGB. If GPUs were available and I had any kind of choice, I probably would pay the extra premium for that feature.

Pros: Card looks nice, lighting isn't overdone. LCD panel on side of card is nice, when the RGB fusion software actually works. I have it set to display core frequency, fan RPM, and core temp. Performs as expected, gets 134 fps in the 4k furmark test, 7976 score. Games I've been playing most recently with it (Baldur's Gate 3, New World, and tested it a bit in Cyberpunk 2077) at 4k with mostly max detail settings, no DLSS, no RT, it's usually getting a consistent 100-120 fps. Pairs well with my FV43U display, and can push the frames to take advantage of a 4k 144hz panel.

Cons: Gigabyte's software continues to disappoint. RGB fusion worked for a couple days but now doesn't recognize the card being installed at all. Have read various reddit/forum posts with many people having the same problem. Only workable solution I've seen so far is to uninstall all nvidia drivers, and then install the studio driver. Using the default fan curve with +450 on memory and +50 core, it runs hot under load. Almost 80C on the core and 90C on memory junction, and that's in a pretty good airflow case (O11 dynamic XL with 6 intake fans and 3 exhaust). Making the fan curve a little more aggressive keeps temps in check and still very little noise, dropped about 15C on the core and 10C on memory. Moving from a evga 1080ti FTW3 hybrid, temps are overall much higher than I was expecting for such a BIG card. See pictures for size comparison, this is a very thick card. Value wise, it's not good. This card isn't "worth" $1600 when a FE 3080 is "worth" $700 and a FE 3090 $1500. But with the current GPU market you kinda take what you can get, which is really the only reason I bought this card through the shuffle.

Overall Review: I wouldn't really recommend this card at this price. It's not a bad card by any means, the price is just hard to swallow. But, if like me, you've been trying to upgrade your GPU for almost a year and this was your only opportunity to do so without paying even more ludicrous scalper prices on electronic bays (newegg won't let me say the actual name), it's not a terrible idea. If prices ever come down to normal, I'd say this would be better priced at around $1100.

Pros: Amazing performance while it lasted

Overall Review: Product failed after around 4 hours of usage. While in the middle of playing BFV, screen suddenly went black. Power cycled my PC and it shows a white LED (GPU failure) and a 1 long, 3 short beep code which is the GPU Failure beep code. Put back in my old 1080 Ti and works fine, swapped back in this 3080 Ti again and no post with beep codes. Using Newegg for RMA hoping I don't have to wait months for a replacement. I'm beyond angry.

Pros: It's an RTX 3080 Ti, you're getting the best gaming performance money can buy right now Cool RGB features and LCD screen Fantastic cooling and temperatures Fan noise is great and quiet

Cons: The size of this card can be difficult to work with if you're going for small form factor RGB software is hit or miss judging by the comments, but my experience has been easy

Overall Review: This is quite the hefty GPU. This is the biggest GPU I've seen but yet it can fit some small form factor PCs like the CoolerMaster NR200P (like mine!). With that extra size though comes some great temperatures and noise levels. The card is on the upper tier side of RTX 3080 Tis out there and you surely won't be disappointed by its performance and cooling.

Cons: More expensive than most 3080 tis that are now available

Overall Review: It's a great card and I'm loving the picture quality and great FPS, but I would only recommend this if: - you have a lot of airflow moving through your case. I had two intakes and 3 exhaust fans with my Cougar MX330 Air and I could really feel the heat from the exhaust as well has from the glass. Had to upgrade to the 7000d Airflow to finally get the temps down. (The purple lit case is my old one) -And if your case is big enough. I only had a little room between the card and my front radiator in my old case. (Check purple lit picture) It's fat card so be prepared for a little sag as well. LCD screen is a nice touch and it was relatively easy to setup. One random note is that the adhesive plastic pieces will peel off if it gets hot enough.

Pros: Does what is expected from a 3080 Ti. Has a nice display and decent lighting.

Cons: The card is massive and takes up a lot of real estate. Also the fans run very loud if there is not enough cooling within the case.