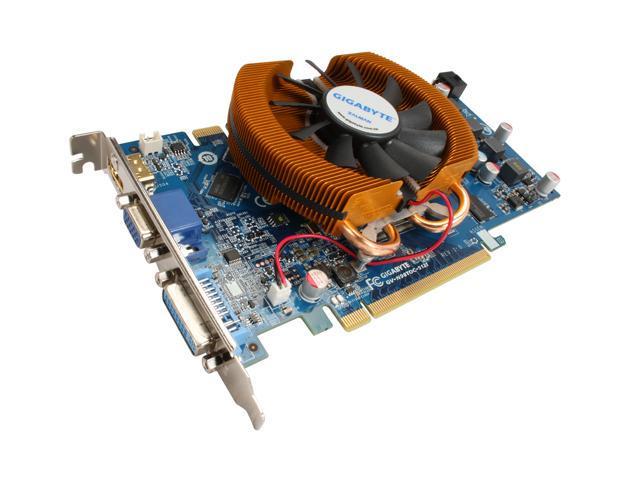 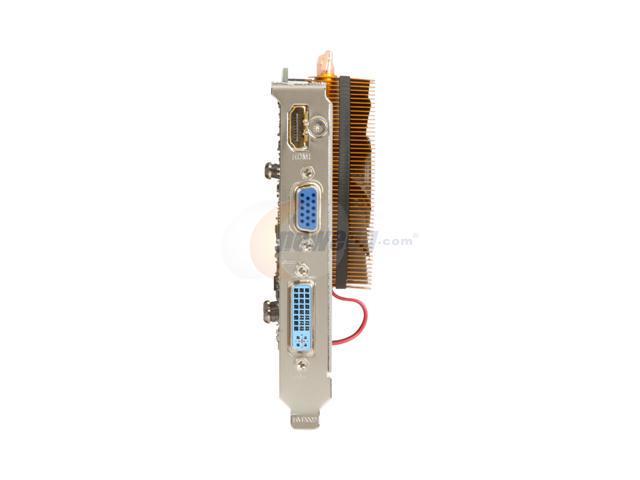 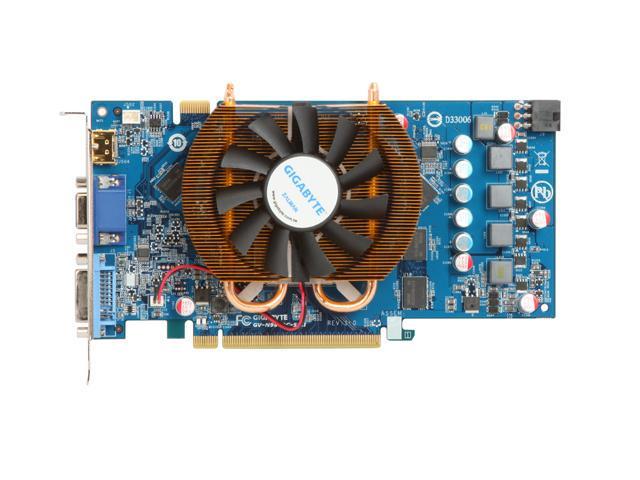 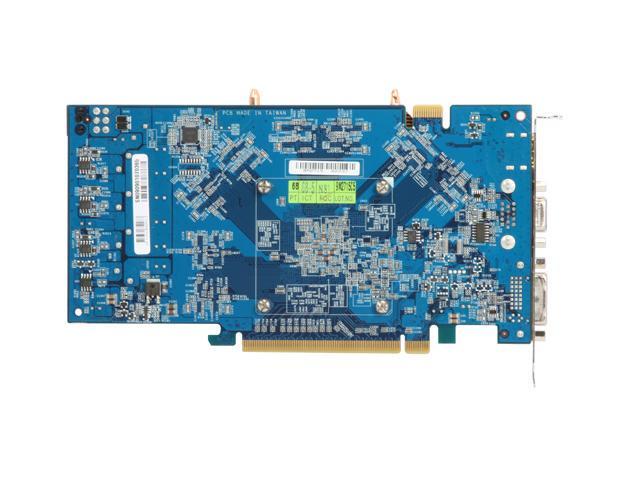 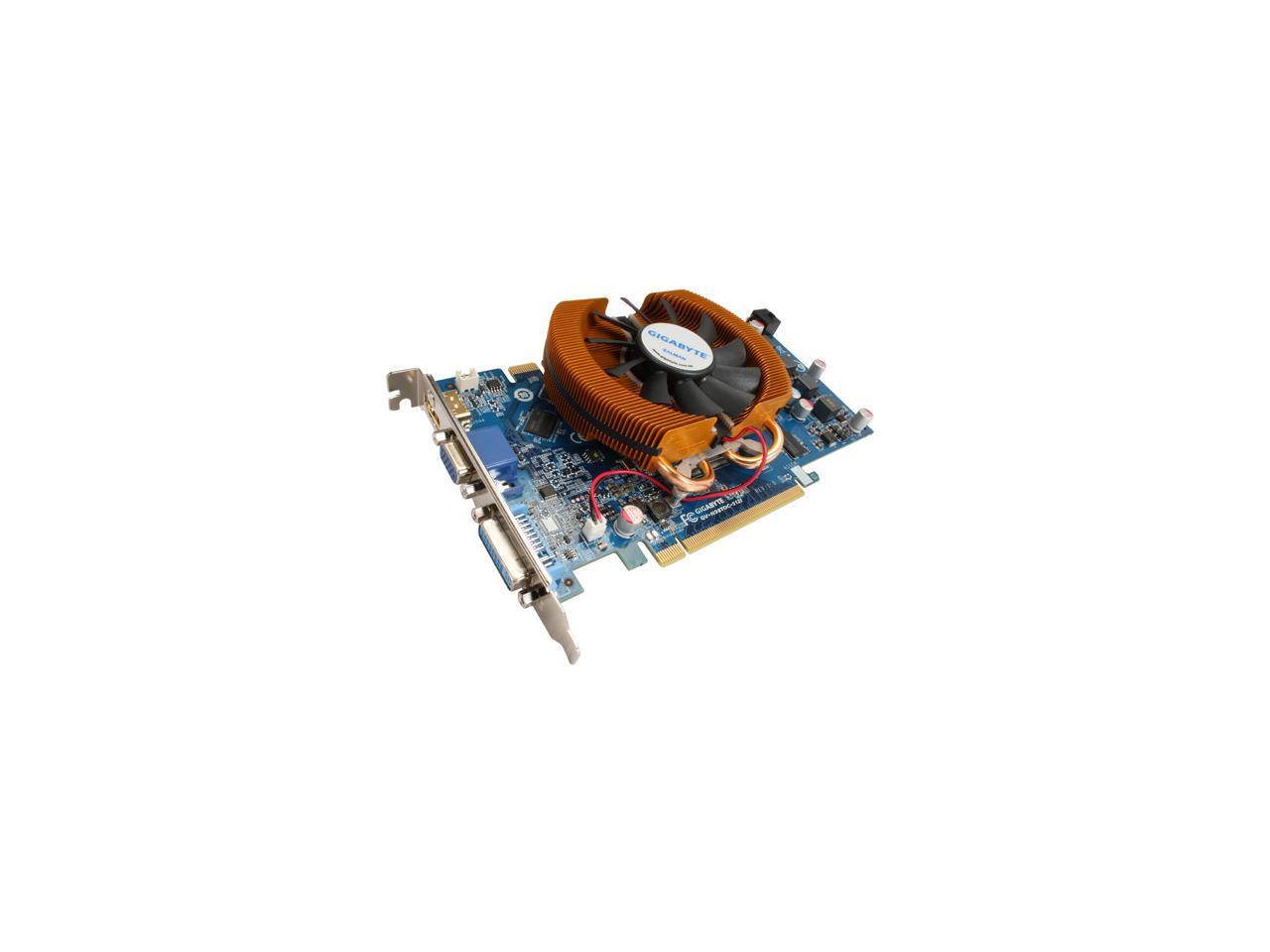 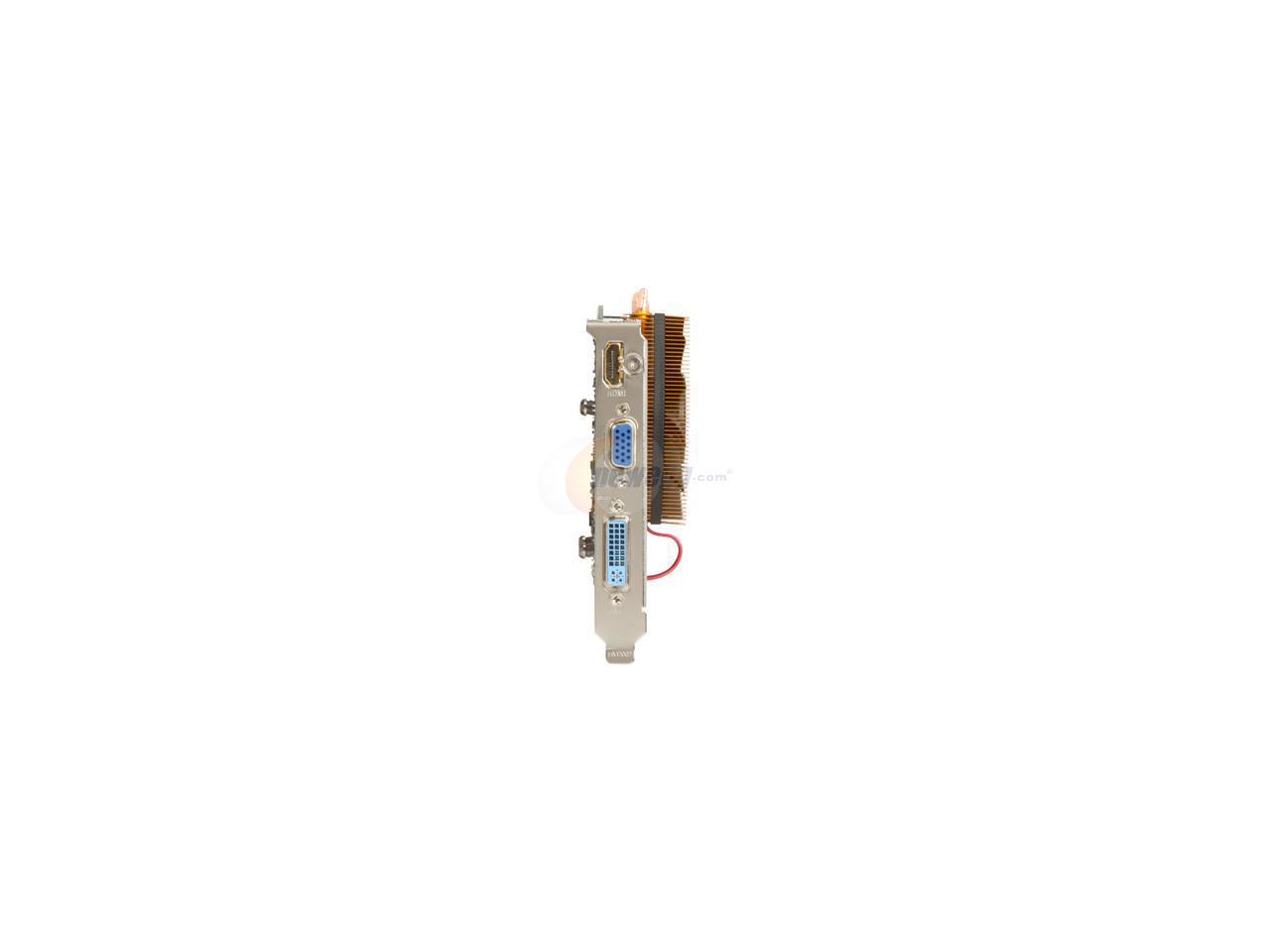 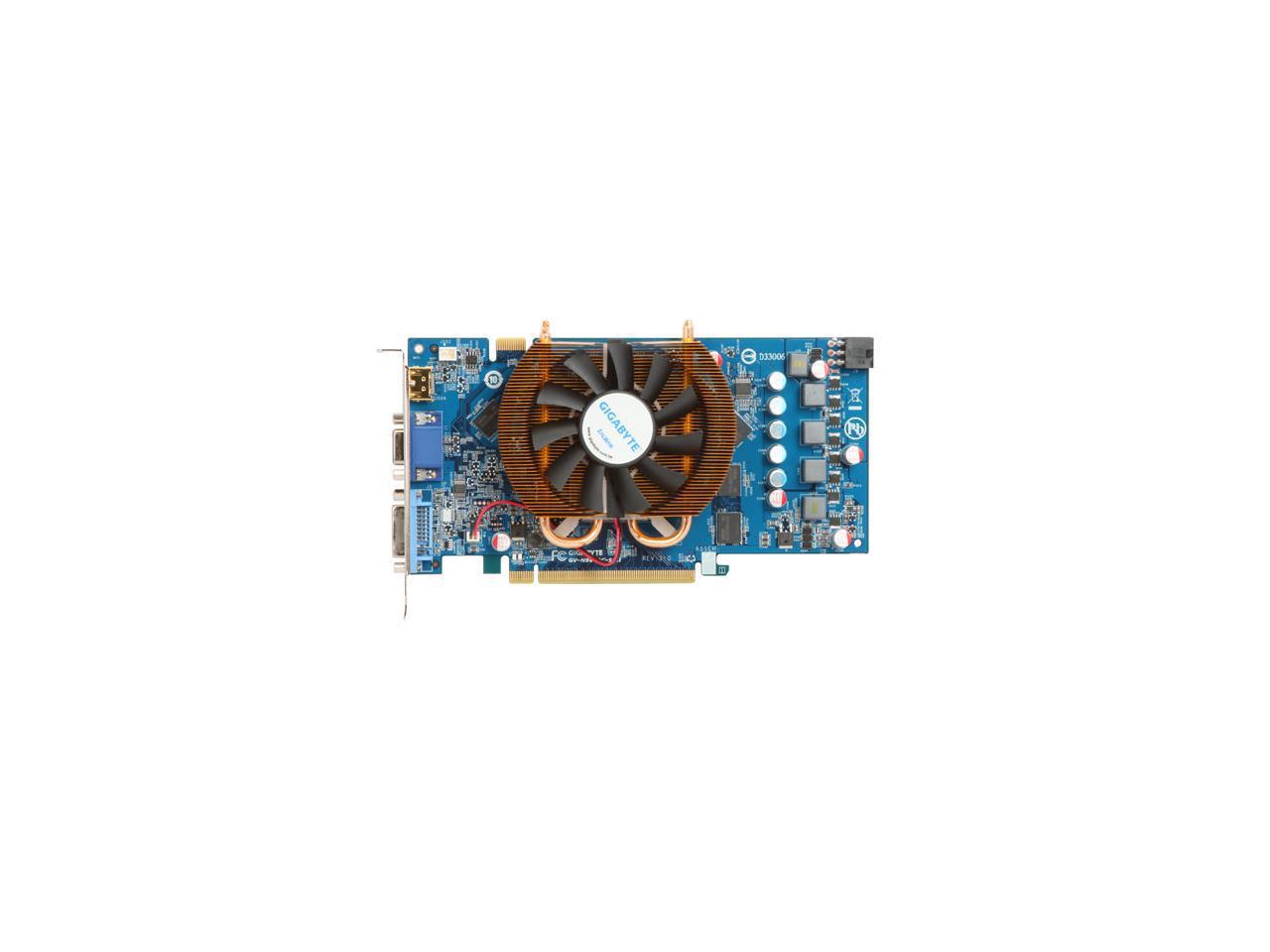 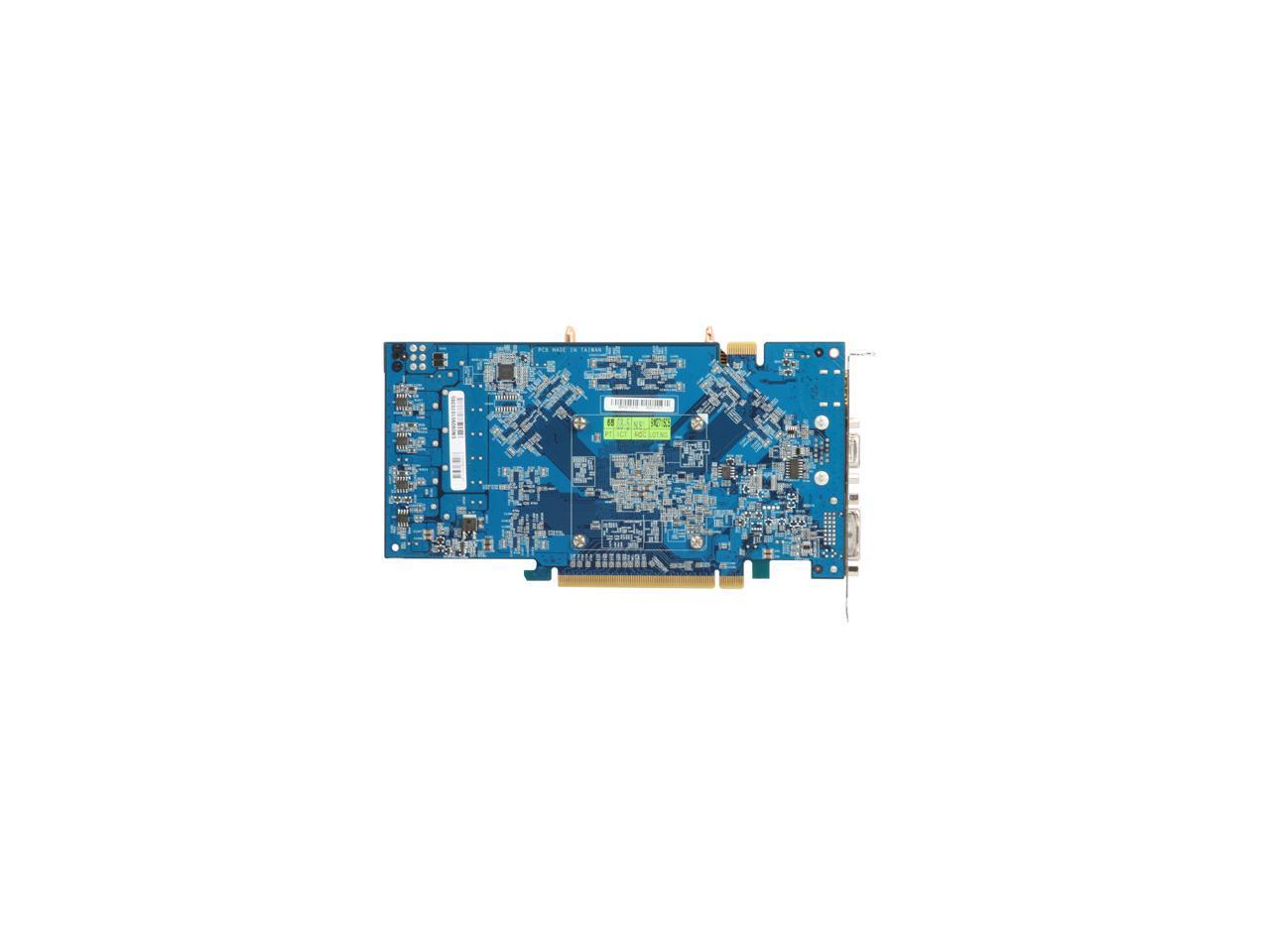 (35) Write a Review
OUT OF STOCK.
Fees for brokerage and duty included in price.
Overview
Specs
Reviews
NVIDIA's ninth generation series of graphics cards brings cutting edge technology and advanced capabilities together for best-in-class performance. The 9800GT is a balanced solution for all your graphic needs. It’s Microsoft Vista ready and equipped with a PCI-Express 2.0 interface for the most up-to-date system. The 9800GT supports Quad SLI which more than doubles your performance by running up to four graphics cards for insane flow rates.
The card's core clock runs at 700MHz, relieving your CPU of pixel crunching duty. Data surges through the 9800GT's 112 stream processors which are fed by 512MB of 256-bit 1800MHz GDDR3 memory. Support for DirectX 10, Shader Model 4.0, OpenGL 2.0 and NVIDIA's PureVideoHD render even the most intense environmental effects, heavy shading, multiple light sources, or HD DVD video with brilliant clarity.
Twin dual-linked DVI and 400 MHz RAMDAC lets you display 2560 x 1600 resolution video and graphics on even the largest monitors, or output to other video displays via the S-Video and HDTV connectors for maximum flexibility. The 9800GT delivers fluid frame rates and HD video with solid performance at a price that'll still leave money in your pocket.

Learn more about the GIGABYTE GV-N98TOC-512I

Pros: I just ordered two of these. A friend has two of them set up sli on a 780i mobo with a Q6600 cpu and 8gb Corsair Dominator ram with Vista Ult 64 bit. He is a Crysis freak and plays it all the time at max frame rates, etc and it looks good. He also paid more for these elsewhere. I don't know why he bought them elsewhere and he won't say but he belongs to the Egg now!

Overall Review: I have bought one other Gigabyte video card and nine mobos and I checked my records. Six of them had rebates and I got paid on all of them. It took the full processing time, maybe a little longer, but I got paid. Unless something has changed since I received my last rebate check, they should be ok. Besides, the Egg would not tolerate things like rebates not getting paid by companies if the rebate was sent in correctly.

Pros: I admit I'm not much of a gamer, so my review might not be relevant to most reading this. This card improved my Windows Experience score from a 4.2 (with onboard) to a 6.0. Video playback is flawless on my 42" plasma. I'm using this as a HTPC, so I was concerned about fan noise, but it's not too bad. It's not silent, but I can't hear it over my case fans. It's not a high pitched sound like some other cards have, just the "whoosing" sound of a large fan.

Cons: The fan isn't the quietest, but unless you're trying to build a completely silent PC it's not bad at all.

Overall Review: I admit I only bought this because of the "shell shocker" deal price, I really didn't need it. It just seemed silly to be running a Phenom II 940 with 8 gigs of RAM and onboard video :)

Pros: I bought this card for a budget, low/mid-rage build and I am surprised on how well this card performs. It runs all my games on 50+ FPS very smoothly and also stable. I play with vsync on at 1900X1200 res, so all I need is 60 fps max. It runs relatively cool and it is a small card so it probably will have no problems fitting in small case, though it obviously takes up to slots b/c of the cooler. Furthermore, has a great quality Zalman-made cooler installed! It also overclocks very well. I was able to achieve 750/1890/1000 (core/shader/mem) stable! It may be possible to go further but there really is no need for me to. Overall, this is a great card for the price.

Cons: The fan noise is noticeable, and it cannot be adjusted by any fan-controlling software, but I was able to work around that. First, the cooler uses a mini 2pin fan connector attached to the card. I bought a mini 2pin to 3 pin fan cord/adapter (female/male). Using this, I was able to attach its fan to any 3pin connectible fan power source. I connected it to my front panel fan controller, sadly it was not able to control the speeds for some reason. Luckily I had a Zalman fan controller lying around and I plugged it in and it worked! Fan noise problem solved! Also a slight con for the overclocking on this card as I was not able to take the mem frequencies above 1000. Every time I would do so, colored specs would appear on screen. A bit disappointed as I read articles online that states that they were able to overclock the mem of the 9800gt well over 1000mhz.

Overall Review: I am a huge fan of Gigabyte products, especially their motherboards, but this is the first video card of theirs I bought. Overall I am having a great experience with this card. It is very reliable, stable and meets my fps needs. I highly recommend this for people looking for a card in this price range.

Pros: I like that this card has HDMI, DVI, and VGA connectors all on the card (don't like using dongles althout it comes with one or two), the heat sink/fan situation seems plenty adequate to keep this GPU temp down, I've tested it stock using benchmark tools and gotten good results, also no problems with any games or Vista Ult 64

Cons: That being said, the fan seems to run full speed at all times and is the loudest thing in my system (if I stop it noise level drops in half). My other beef is maybe not with Gigabyte but with Nvidia, what happened to the temp monitoring utility in the Nv control panel? How can the card be expected to use reduced fan speed if the no temp monitor on chipset?

Overall Review: I have had no support problems with Gigabyte, in fact I bought this adapter in a combo with a Giga mobo and felt that the quality of both was decent for the price.

Pros: This is the faster Factory overclocked version. It has 700mhz instead of the reference 600mhz. This brings it closer to a GTX in performance. The GT has only 16 less shader processors and 8 les texture units. This card also has a quality Zallman HSF installed and it is quiet and cool. The PCB is shorter than most giant PCIE16 card out there today, so it is a plus when your like me and your case is jam packed with hardware.

Cons: None so far. Installed flawlessly in Linux Opensuse 11 with Nvidia proprietary drivers.

Overall Review: I have read 3 separate in depth reviews$ comparisons on thsi specific model and this is a great card and IMHO ,at this price it is great bang for the buck.

Pros: Nice looking card. Huge heatsink and fan, which I think are Zalman. Fairly quiet. Mine stays around 39 degrees Celsius with a Thermaltake PCI slot cooler below it. Performance from this card is exceptional. I haven't pushed it yet, but I am pleased with what I have seen so far.

Cons: none that I know of.

Overall Review: It is a farily short card which is nice since my case, NZXT Alpha, is not built for some of the new/big cards. Overall, Gigabyte came through on this card. Also got it cheap as a Newegg Shell Shocker, which helped me justify the cost.