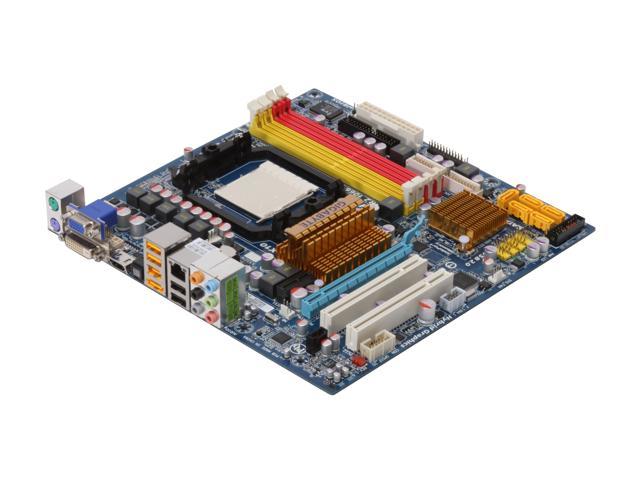 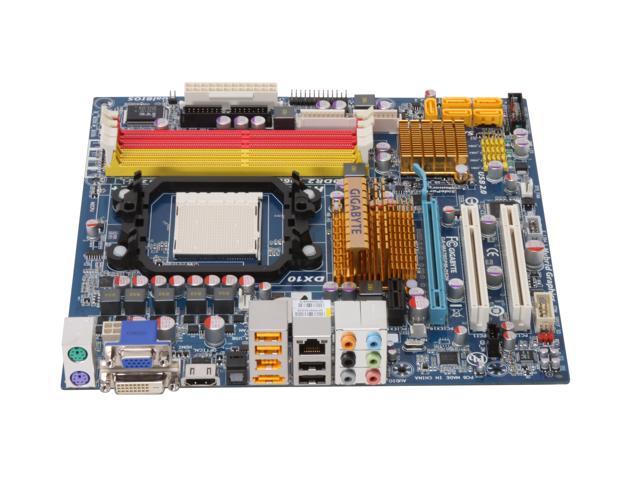 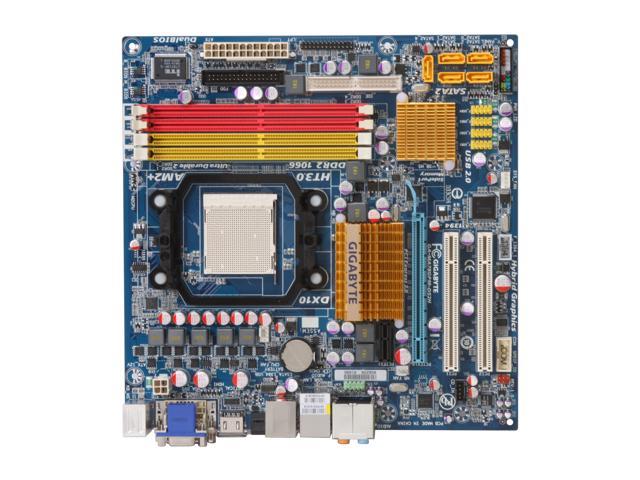 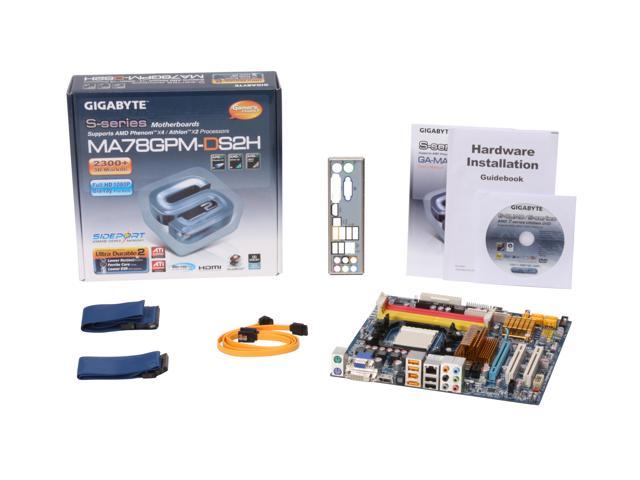 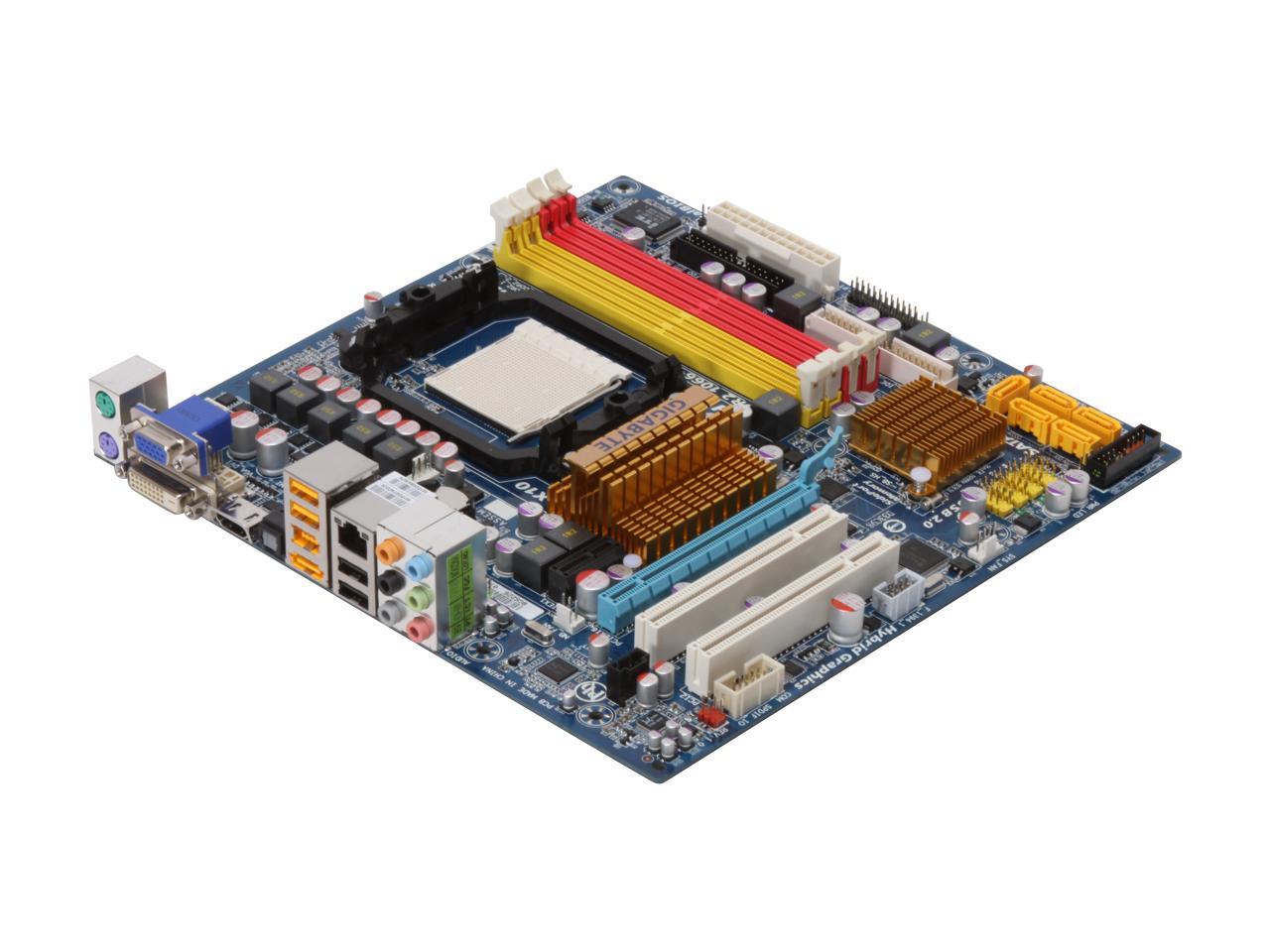 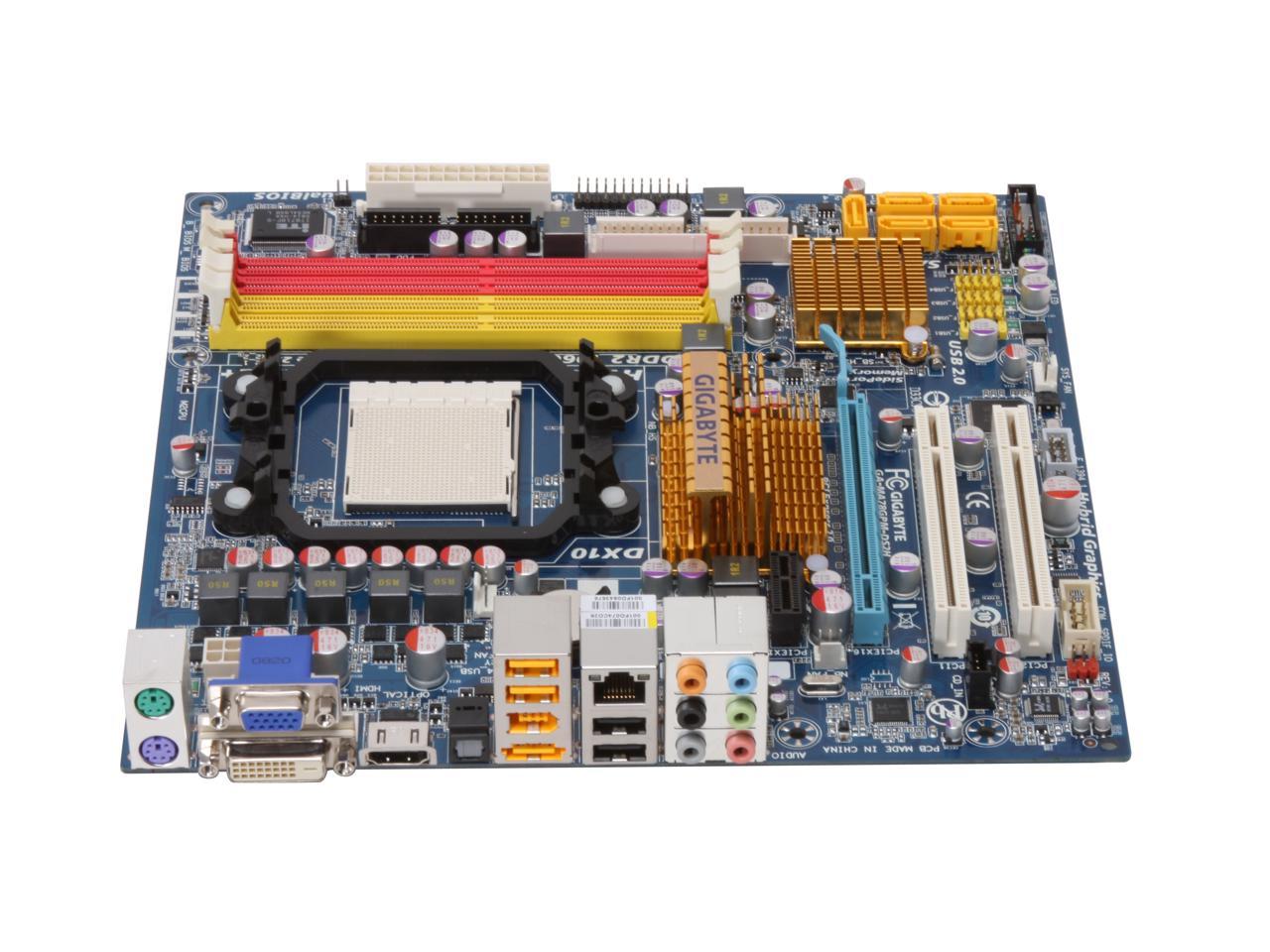 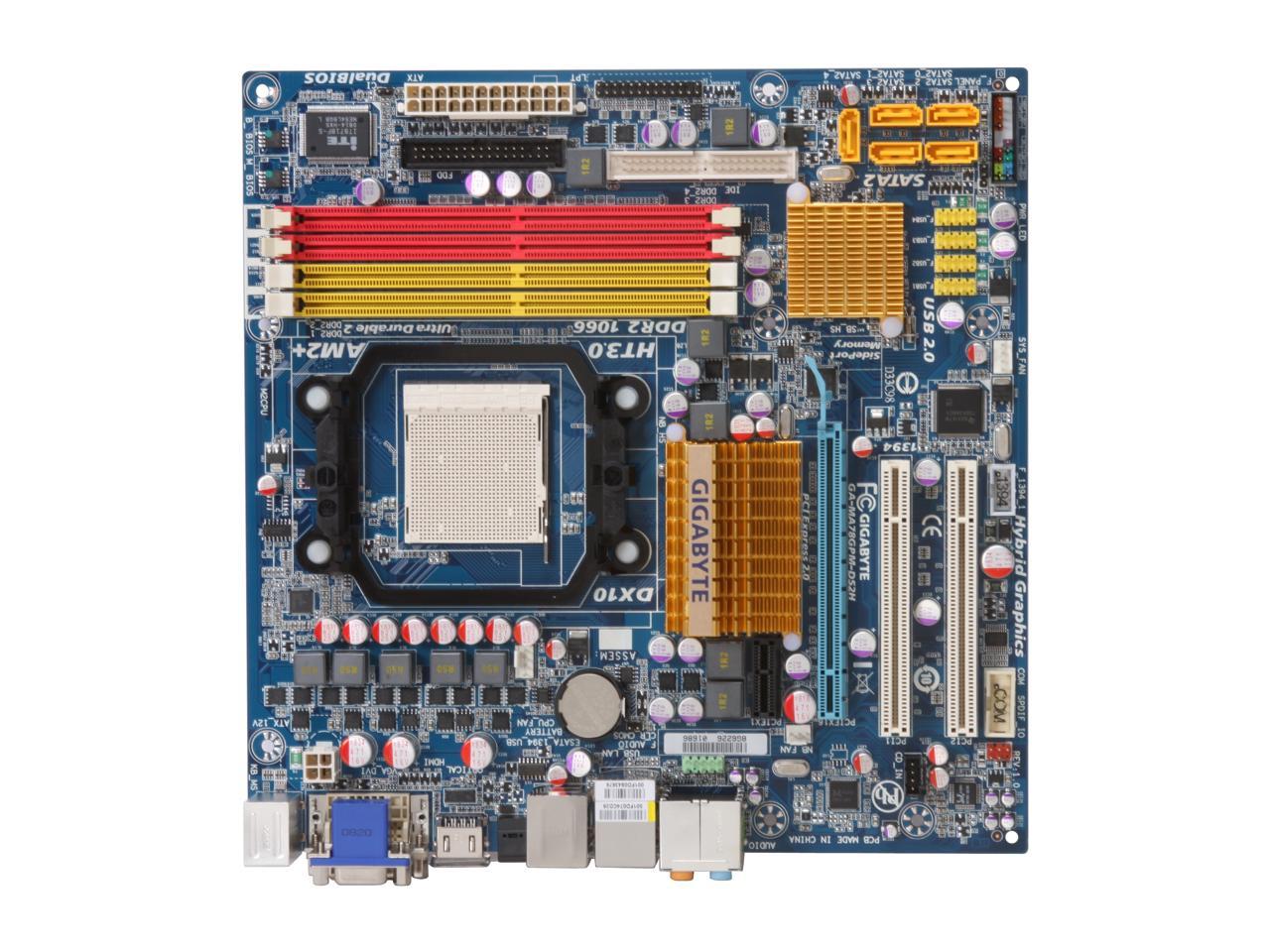 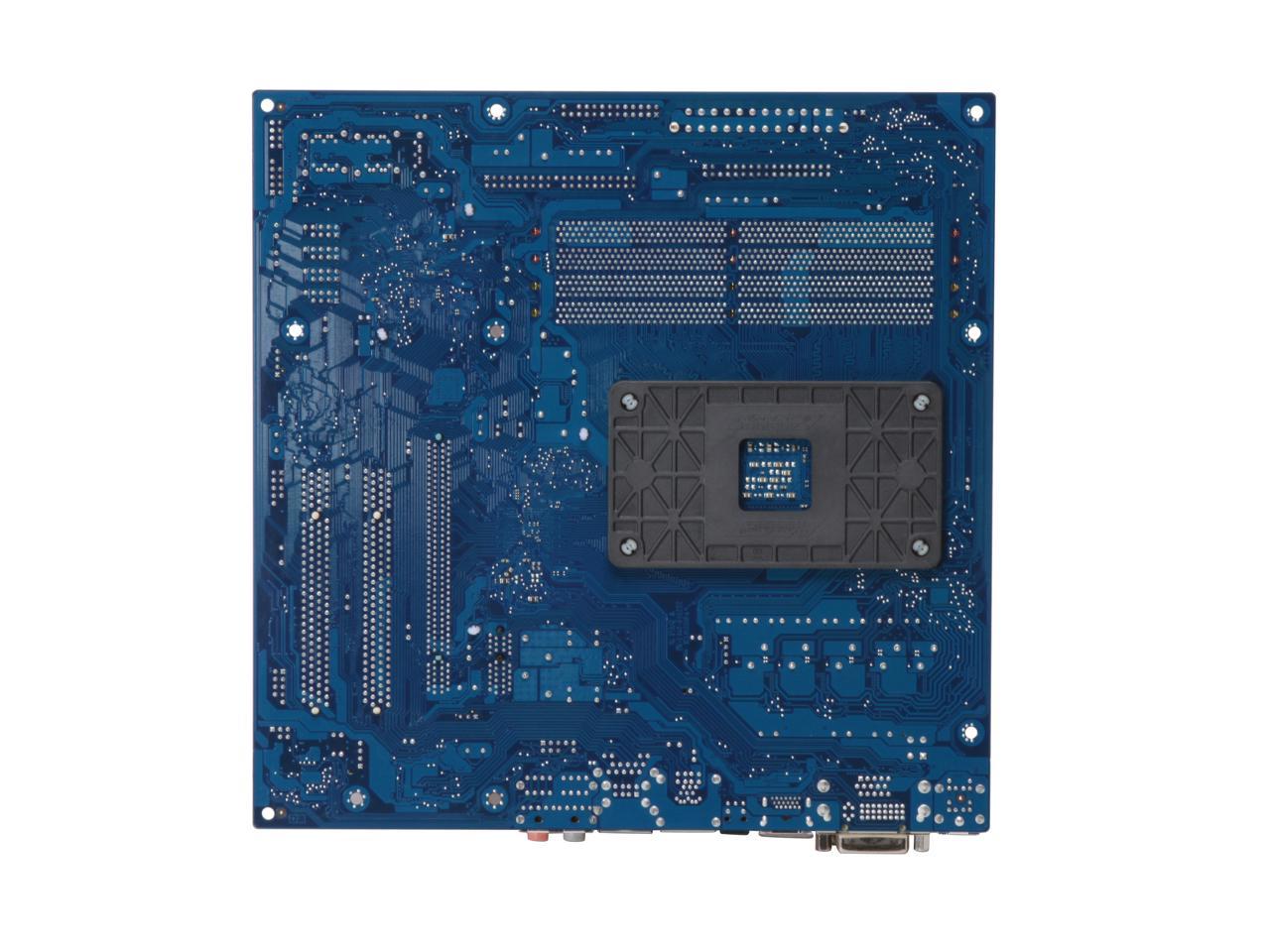 (112) Write a Review
OUT OF STOCK.
Fees for brokerage and duty included in price.
Specs
Reviews

Learn more about the GIGABYTE GA-MA78GPM-DS2H

Cons: HOT HOT HOT !!! The row of ferrite inductor cubes next to the row of capacitors gets REALLY hot. I don't want to hold my finger on any one of them for very long. This won't damage the inductors, but this *MUST* be bad for the adjacent capacitors. I have to wonder about long-term reliability. The southbridge gets *TERRIBLY* hot - it should have its own cooling fan. The northbridge gets *UNBELIEVABLY HOT* !!! Nothing is overclocked !

Overall Review: Install Procedure: 1) Throw away the driver CD, IMMEDIATELY !! Download both the device drivers and the latest BIOS from the Gigabyte site. Copy the BIOS image file to a USB drive. 2) Install ONLY 1 RAM stick in the slot CLOSEST to the CPU. 3) Burn the new BIOS using the <End> key to enter the Qflash utility during startup. 4) Shut down and short out the BIOS reset pin on the mobo. 5) Restart and press <Del> to enter the BIOS setup. 6 ) "Load Optimized defaults" in the BIOS. Set the date-time and check/set RAM voltage & timings. DON'T OVERCLOCK. Check/set SATA controller modes as desired. Save settings and restart. Shut down again. 7) Install any remaining RAM sticks - FOLLOW THE MANUAL'S INSTRUCTIONS on which RAM slots to fill. 8) Optionally run MEMTEST86 to verify RAM operation. This will take A LONG TIME. 9) Install the OS. Install the drivers. DO NOT INSTALL that Windows audio driver. 10) Enjoy. ***ADD EXTRA COOLING FANS*** to move fresh air around and then exhaust it.

Pros: Micro Atx form factor. PCIE express 2.0 video card slot. 128mb ddr3 sideport memory. 125 watt phenom capable. All solid capacitors. Better northbridge heatsink than previous models. Built in HD audio is excellent. Very good placement and layout of parts on the motherboard. The best connectivity options of any micro atx board period! I could go on and on about the great features of this particular board. I have played blu ray movies just off the IGP and it played it flawlessly at 1680 x 1050 resolution! I previously owned the first model of the 780g by gigabyte and this version is the pinnacle of what the 780g is all about. Do not hesitate to buy this board!

Cons: More expensive than other 780g boards but hands down better quality!

Overall Review: AMD continues to impress me with innovations like the 780g chipset! For anyone who cares, the AMD 4850e 2.5ghz cpu is an excellent match with the 780g chipset.

Pros: I've built many computers for friends and co-workers over the years usually using the best low to mid price ranged boards that I could find based on features and customer reviews. I have to say that this board just WOWs me! I've never come across anything quite like it. It has everything that I could possibly want in a board. I'm not an overclocker - just want something rock solid and stable - but there appears to be many options to speed this thing up. You'll need to read other opinions for views on that.

Overall Review: Installed World of Warcraft right after I installed Vista 64 and just HAD to check it out right away. With on-board video I was getting a 41 fps frame rate. Pretty good if you ask me.... Usually won't buy anything new like this until it has been thoroughly reviewed but couldn't resist after reading the spec page. Great decision! I believe that this will be one of the most popular boards for gaming and home theater on NewEgg's site in a very short time.

Pros: I feel I did an extraordinary amount of research in selecting a micro ATX motherboard for building a HTPC off of. I was concerned that it combined with a BE-2400 low watt AMD process wouldn't be enough to play Bluray discs well -- but I pulled the trigger anyways. Needless to say, it runs them flawlessly...and with only 2GB of memory on Vista Ultimate 64bit. Was watching 1080p Bluray with DTS audio last night while unrar'ing a large file...video and audio never stuttered once. I see ~17-20% CPU usage watching BD. This 780G chipset is really, really nice...runs very well, and stays EXTREMELY cool. If you're building a HTPC, you can't go wrong with this board if it has enough add-on cards for ya.

Cons: No integrated wireless, or option of it.

Pros: Default Bios settings overclock my G.Skill DDR800 as DDR922! (at least so sez memtest86) North Bridge is warm, but not hot. Using the sideport mem, it only steals 128MB of your DDR2 Best integrated gfx I've ever seen. Plays BZflag with no trouble. Has dvi, vga, hdmi out. It's efficient (my system idles at 37-38 watts), and has new-fangled capacitors and mosfetts. Hopefully they'll live up the the gigahype and actually prolong the life of the board.

Cons: Can't tell it to use only sideport mem. Not a big deal though. Occasionally BZflag will flicker when I start it up. All I have to do is quit and restart, however, and it works fine. Not sure if it's hardware, or the ATI driver for linux. AM2 CPU can only handle up to DDR800 (not DDR1066) but this is a limitation of AM2 cpu's, not the chipset.

Overall Review: Everything detected straight out-of-the-box in Ubuntu 8.10, which was a pleasant surprise. The video drivers are proprietary and thus aren't installed by default, but Ubuntu automatically detects and prompts for a download/install. When using an HDMI cable to a TV, windows automatically reverts to HDMI audio, and I haven't yet figured out how to get digital out audio to work.

Cons: No audio driver for Linux.

Overall Review: Excellent board but not for Linux. No driver for on-board ALC889a audio chip. Did a web search and many had problems with this chip, though a few got it to work. I gave up and am using it with Vista...works great for that. For Linux, plan to use an audio board.

Pros: I'm using this in my HTPC and it is awesome. Installed into my case plugged everything in and without much trouble was installing windows. Loving the 1080p output using the HDMI in conjunction with the Blu-Ray/HD DVD drive I got. Couldn't be happier with buying this well priced board. No video card needed for 1080p playback!

Cons: When attempting to install Windows XP I kept getting the blue screen of death. Removed one of the two sticks of ram and switched to an IDE HDD and voila! Not sure the problem, but after installation I formatted the SATA drive, installed Windows on that instead with no conflicts. Also, reinstalled the ram and the mobo read it correctly.

Overall Review: For an HTPC I can't imagine a better combination of price and performance!