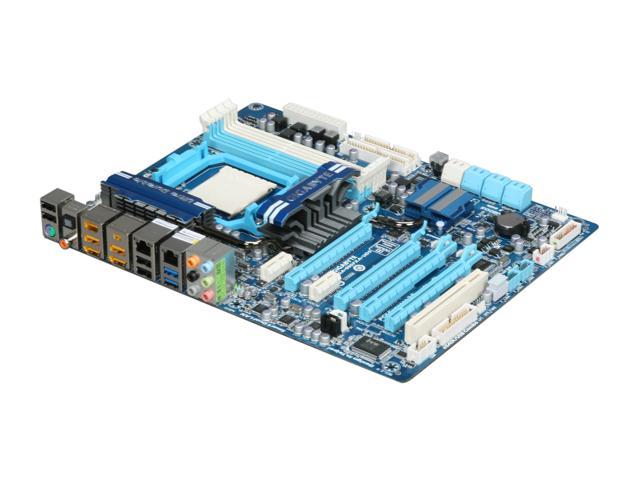 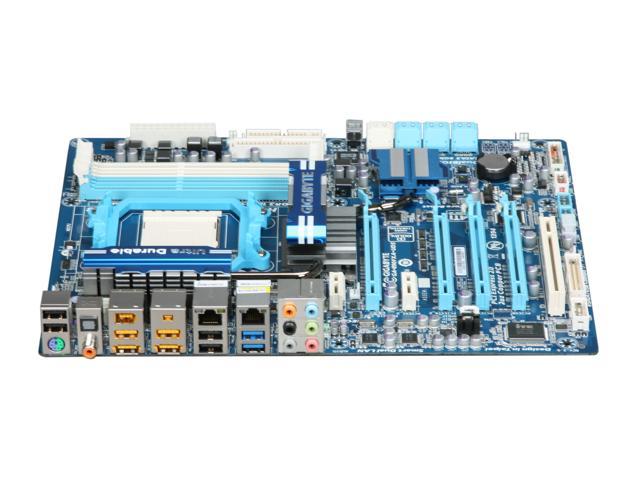 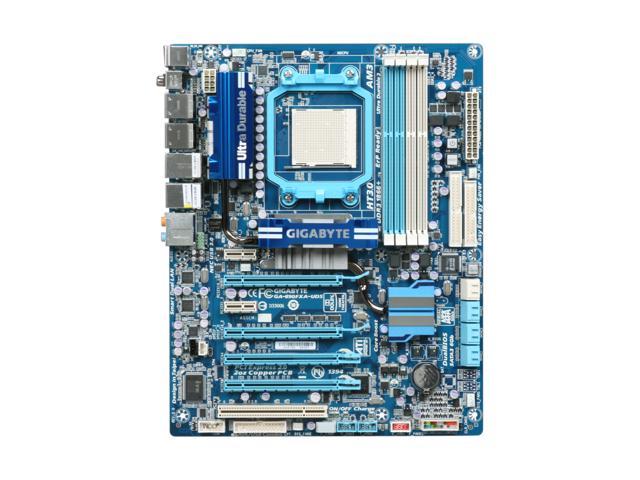 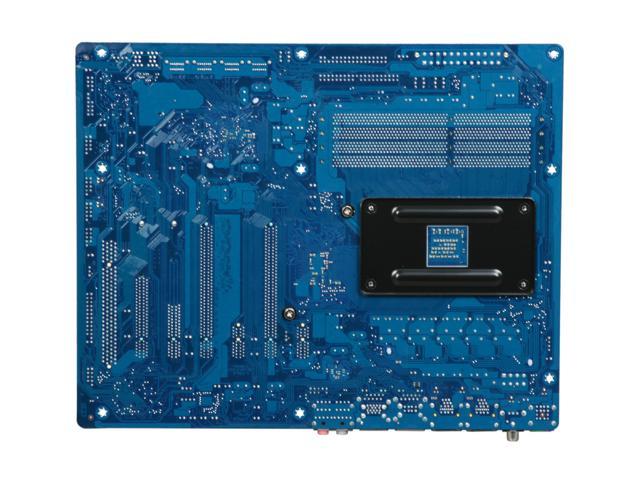 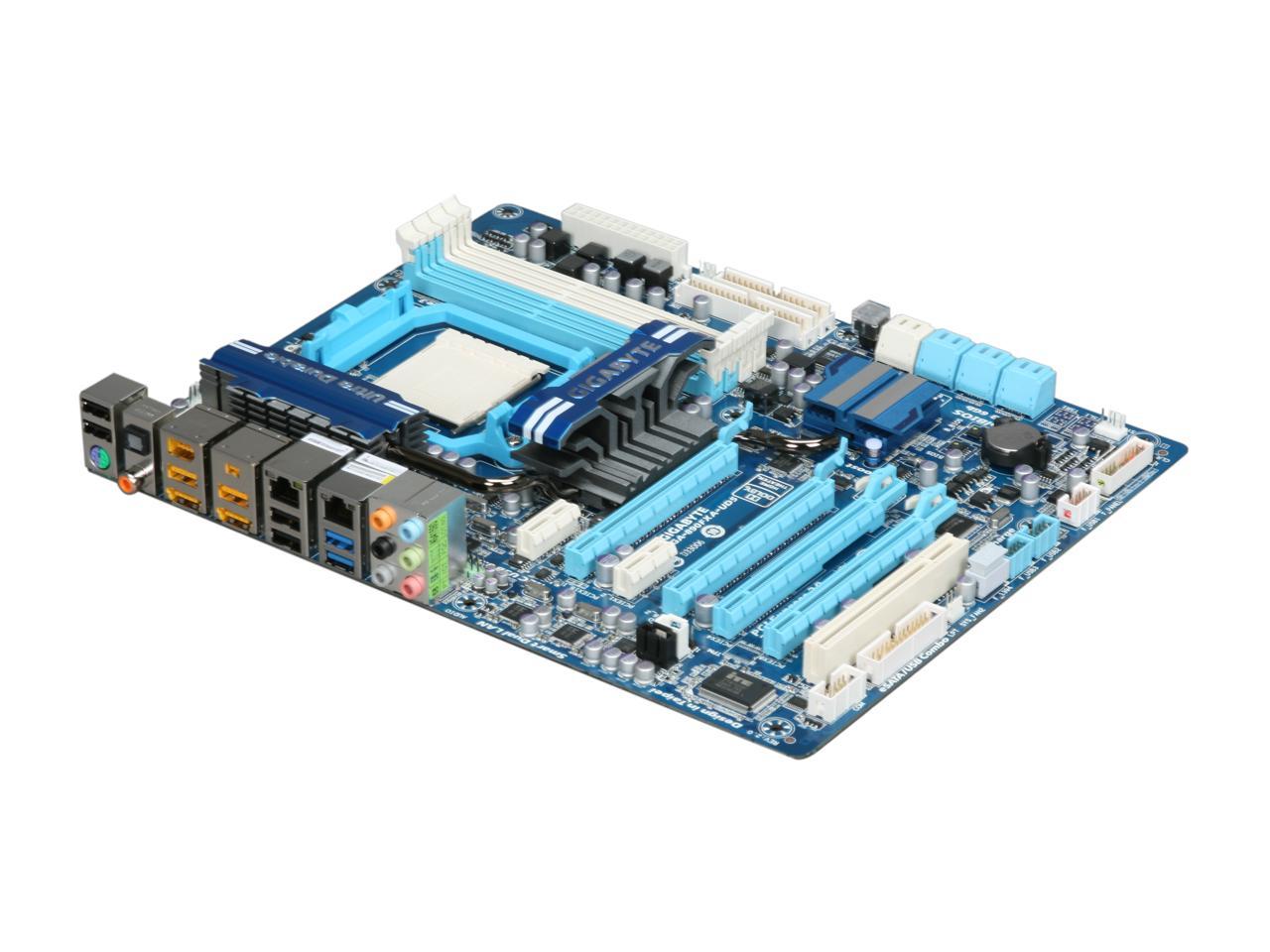 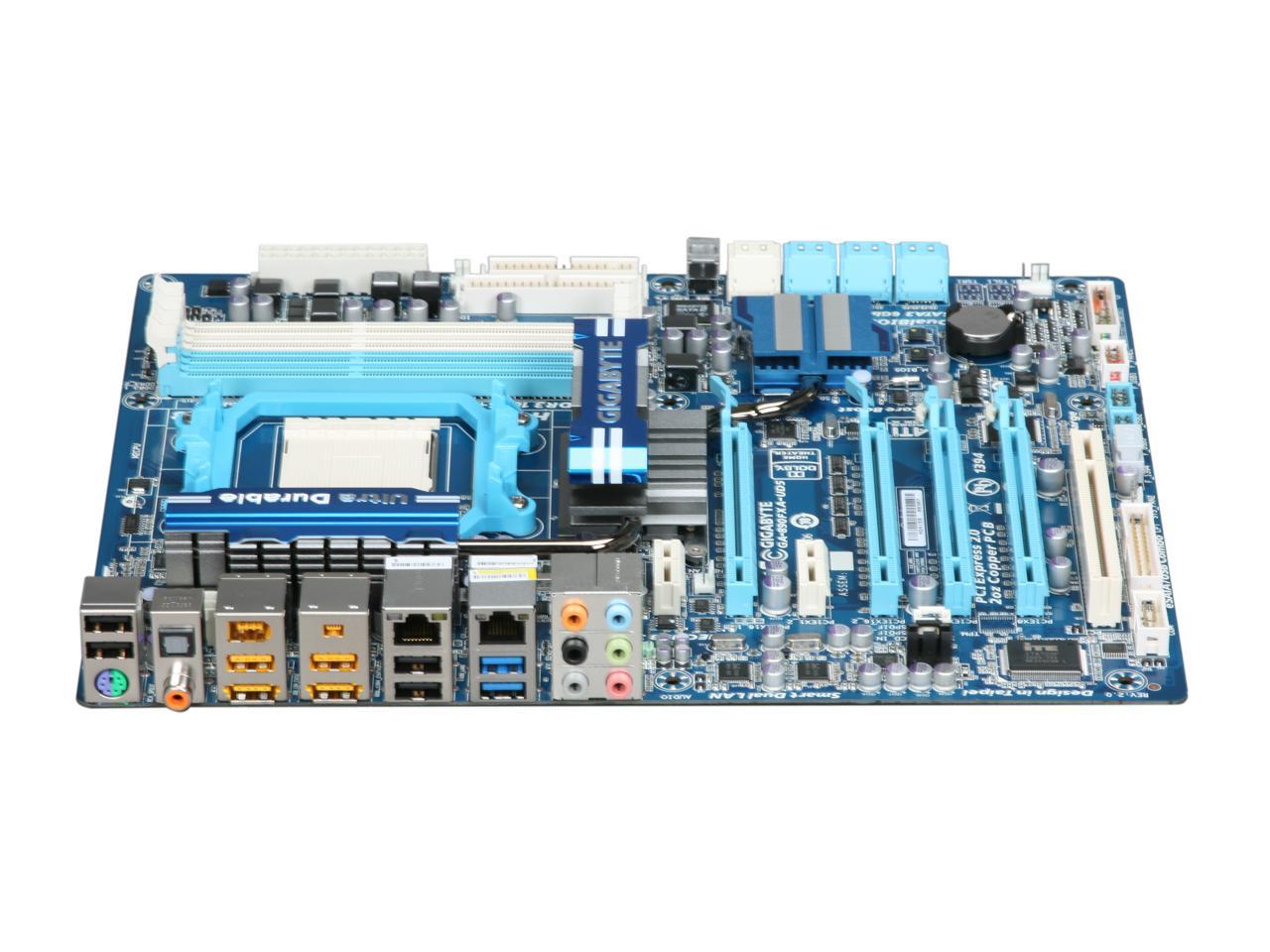 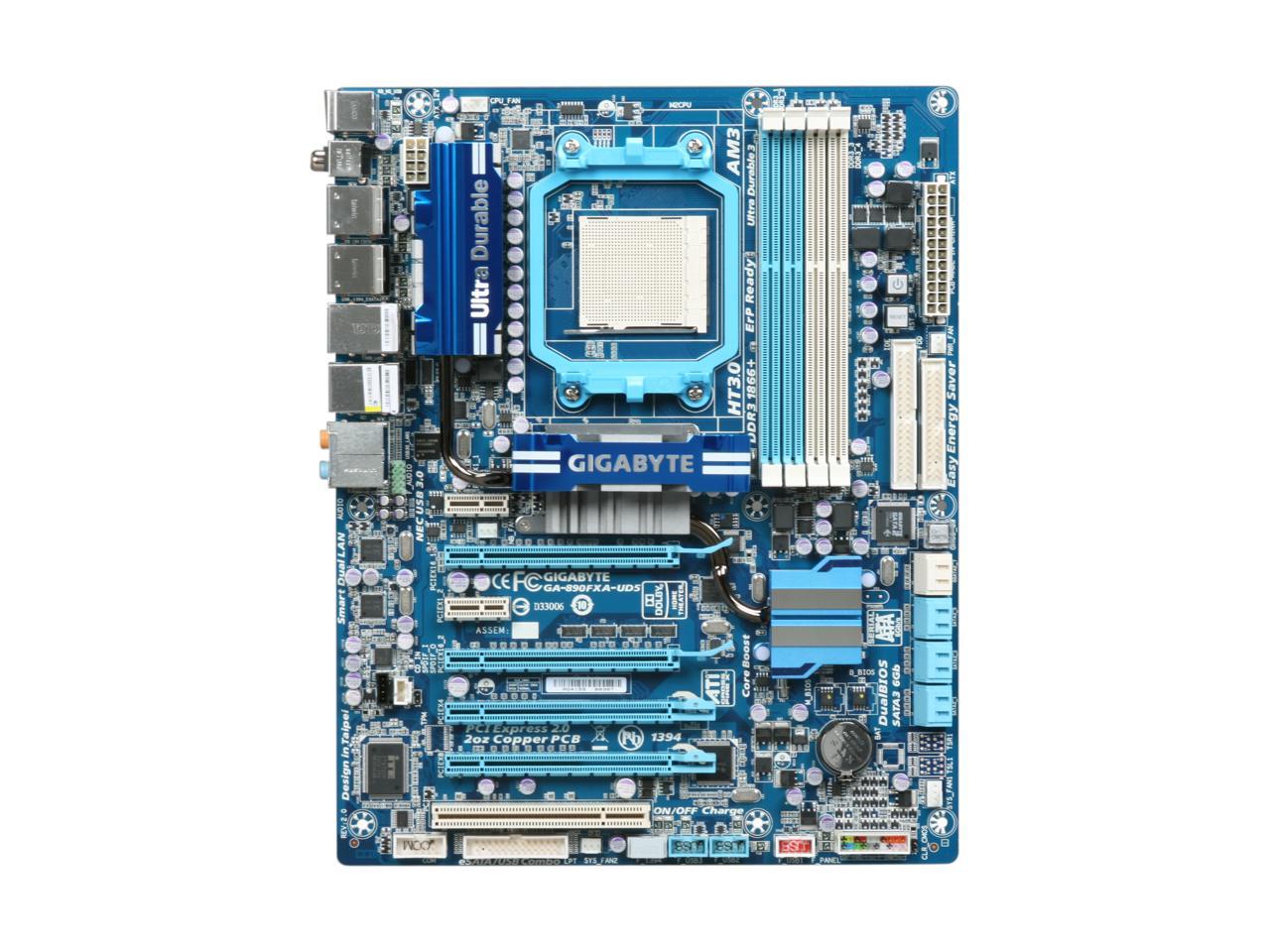 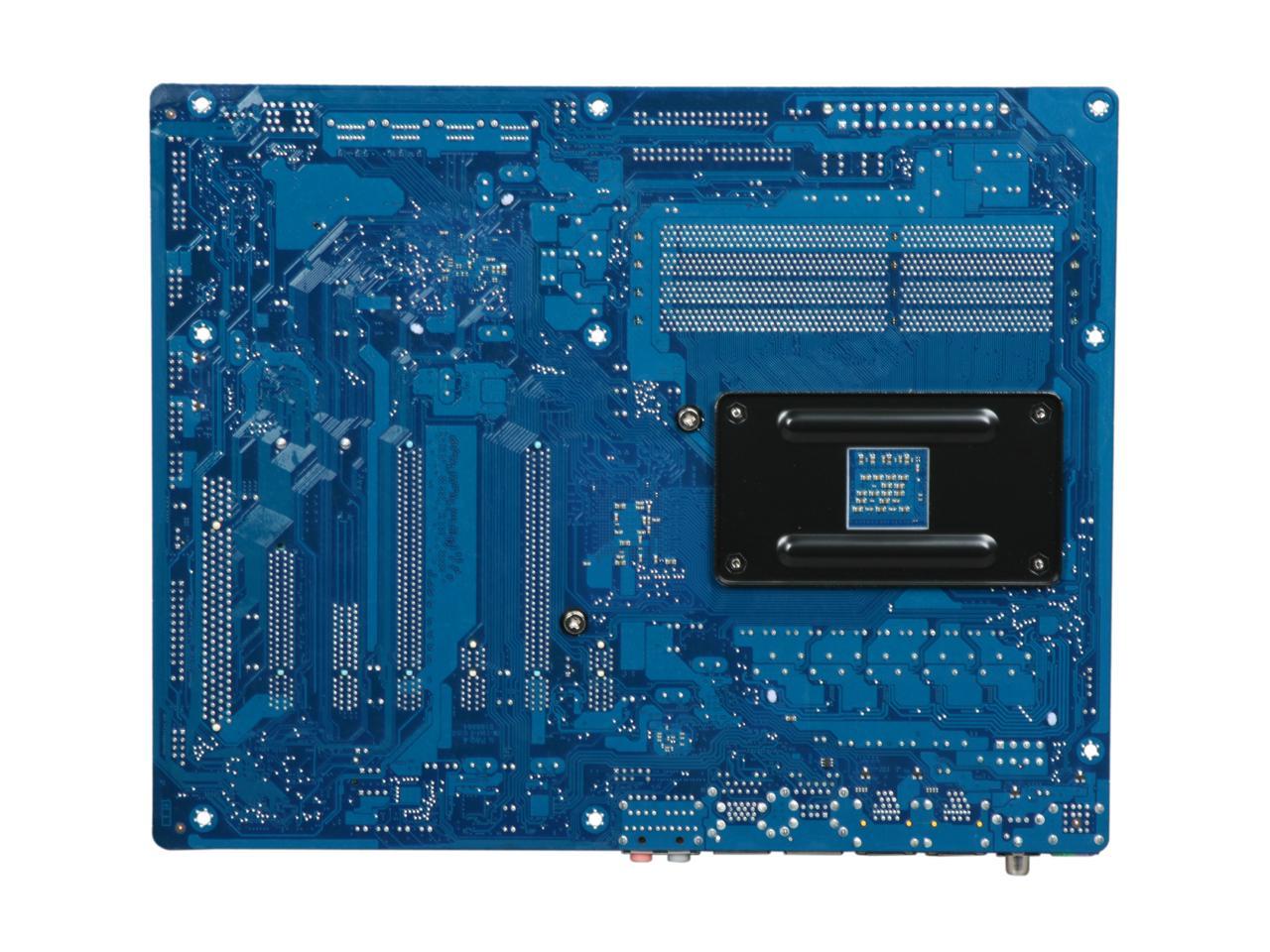 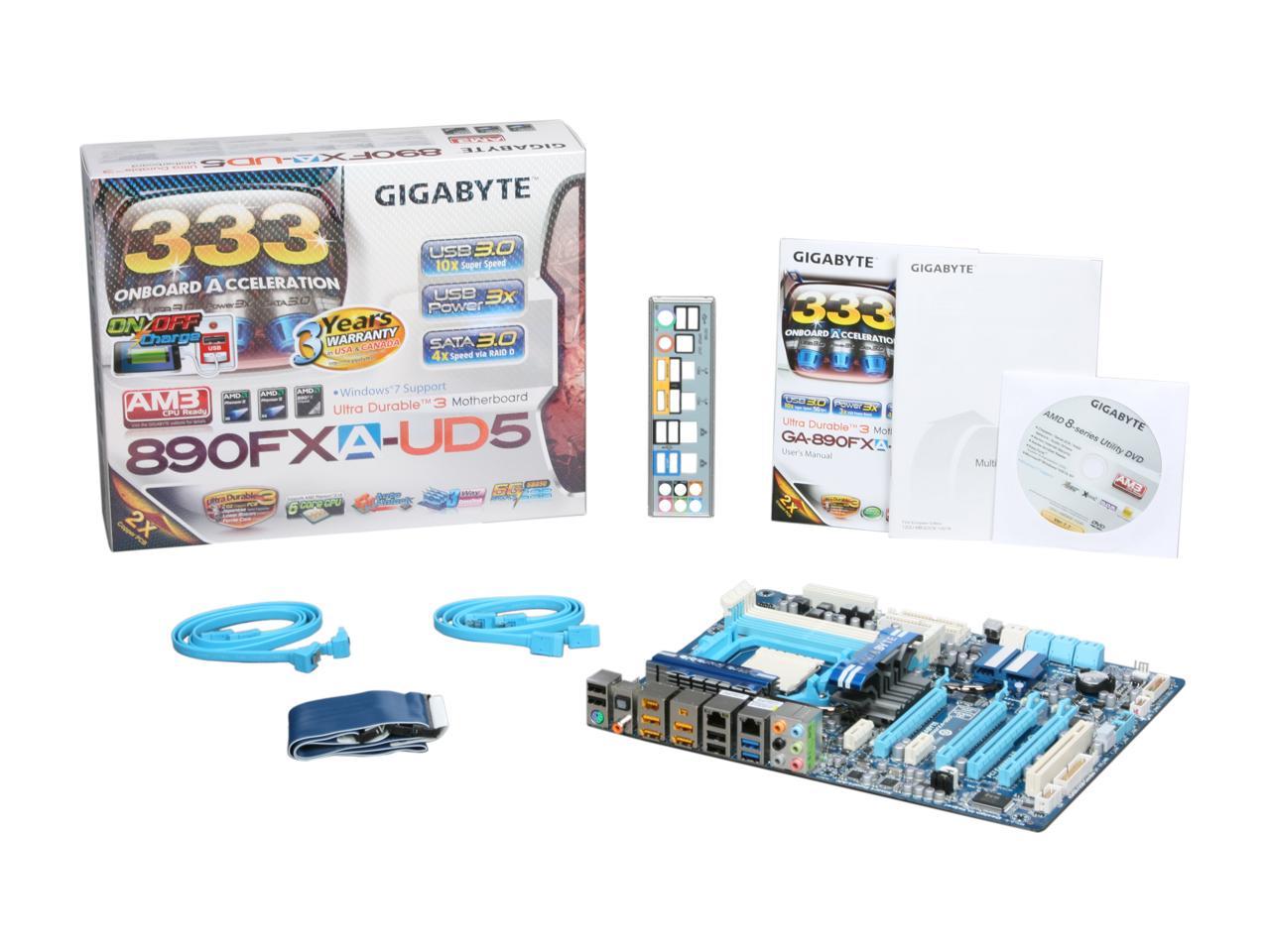 (277) Write a Review
OUT OF STOCK.
Fees for brokerage and duty included in price.
Specs
Reviews

Learn more about the GIGABYTE GA-890FXA-UD5

Pros: strictly speaking about the mobo, so far it works great. no issues there. Im not real techy so im not sure what else to say here. its awesome.

Cons: This was my first computer build, and it was a hassle. The first mobo i ordered came to me defective, ok not newegg's fault it happens i guess. So I RMA'd it back, and another one was sent to me quickly. Only thing was that newegg sent me a USED one! ya thats right. I was livid! they said oh so sorry we must have gotten mixed up, which to me is bull. the box had clearly been opened and whoever returned it taped their RMA form right to the front of the box! The mobo was thrown in the box with no protective plastic, the manual was missing and a SATA cable was missing too! Anyway, i was so anxious to get my puter running i just hooked it up anyway and it works fine. Newegg said they would send me a new one, but also said my warranty on this one is just as good. i decided to keep it. but still feel betrayed. its the principle of the whole thing. you pay for new, you should get new!

Overall Review: I hope newegg doesn't allow this to happen very often or do it purposely trying to get used merchandise off of their shelves. this was the first time i ever used newegg as well and it kind of put a bad taste in my mouth :(

Pros: -Great amount of onboard connectivity. -6 X Sata 3 6Gb/s ports (don't know what the previous reviewer was talking about no new Sata connectivity?) -2nd Sata 2 controller for 2 addtional onboard ports (w raid capability), Plus 2 eSata ports with their own controller that can also Raid. -Onboard Power, Reset, and Clear CMOS buttons for overclocking are very handy. -Dual Bios -High Quality contrsuction and Components -Award Bios -890FX 32 PCI-E 2.0 lanes for either true 16x/16x Crossfire or for a good video card and some add-on storage/hardware raid/USB 3.0 cards for future proofing. Running 1055t @ 3.6Ghz stable with stock Coolermaster Hyper 212.

Cons: Seems they could have shifted the ram slots a touch further away from the socket. I went to add a second fan for push/pull, but it's an 1/8th inch too fat and push into the ram's (Patriot Viper) medium tall heatsinks. Mushkin/Crucial/Corsair XMS and other minimal heatsink ram should slip under a second 120mm fan on that side. The clips that come with the Hyper 212 allow me to mount a fan clipped on the heatsink above the ram, not the cleanest or most ideal with the fan sticking 1/4" above the top but it works if you need the extra airflow. NB runs a bit hot, but is typical. Core Temps not reading in AMD Overdrive or other. Only Bios is currently reading CPU temp accurately.

Overall Review: Seems the other poster who was having issues got a bad chip or board. They only ever released a Rev.2, because they updated the original design to add USB 3.0 or something like that (can't remember exactly) so there shoudn't be any possible way to have a Rev.1. Also the Bios is still at F1, and there currently are no updates so that shouldn't be an issue. The current Bios should fully recognize X6 chips. Maybe try clearing the CMOS and starting over or Flash from the back-up Bios. Have you downloaded AMD Overdrive and seen if it recognizes 6 cores or tried turning on core unlock in the extremely off chance you somehow got a locked core CPU. Last I wish Gigabyte would split the manual and auto settings for ram 1st and 2nd timings like Asus. And a bit more fine adjustment in some of their voltage settings.

Pros: This board has everything I was looking for plus more. I'm not going to point out the obvious pros that everyone knows about, but what I will point out is the core unlocker did work fine for me, without the extra 12v connector, the board has 2 USB ports that can have 3x the amount of power running through them to recharge devices such as mp3 players faster, and 4 of the USB ports in the back are also e-sata ports, so you can choose one or the other which I thought was really cool. I also like how it has an ATA controller since I do still use those drives. I thought it was really cool how the power, reset, and clear CMOS buttons glow blue too. This board also had *5* fan connectors. I don't think I've seen another board with this much. I'm currently working on using the 4x pcie slot with a geforce 8400GS for Physx while using an ATI HD5750 for a video source. I do plan on doing crossfire eventually, so lets hope this plan works.

Cons: For some reason, most of the time when you use the core unlocker, the temperatures don't show up for the CPU. Currently I have no use for all 4 cores, so I just kept it off for now. Also, this board, like many, came with Realtek for audio, and I've never liked Realtek. Luckily I have my own sound card. Also, I'm not exactly sure what the issue is but Linux will not completely boot up on this. I have 2 dedicated Linux computers and I bought this board for gaming so Its not really a huge problem, but for anyone out there who is a Linux user, don't buy this (yet).

Overall Review: I did some research and found this is faster than some of the best motherboards out there. I know motherboards don't have a huge impact on performance, but this board is completely worth the money and I would highly recommend it to anybody who wants an AMD gaming rig. the fact that the 4x slot can't be used for crossfire, if you can get physx to work then you've still got a use for the slot. since physx doesn't need a good video card or bandwidth, 4x is plenty of performance for it.

Cons: None, except the fact that only 2 fans can be controlled by the bios and that only the settings of the CPU fan are adjustable.

Overall Review: Originally, I was looking at the GA-890FXA-UD7, but I would be suprised if one day I run a 3x CorssfireX config, so I clearly dont need the 4x CrossfireX capability. The stock cooling is really good the way he is, all temps are pretty low, even under load. This board has everything you need, and has been really well designed. You still have 1 IDE port to plug your old hard drive, and the good old floppy port is still there if you want to plug in one of those old but still sometimes handy floppy drive. Also, they kept 1 PCI expansion slot. This board is a real candy for overclocking lovers. Tons of bios setting available, Onboard clear CMOS button, onboard reset and power button, dual bios for added safety. Overclocking software are also provided if you like to tweak under Windows. The installation of the board itself was a breeze following the users guide, and Windows 7 x64 intalled without a single issue. Way to go Gigabyte, this board is awesome!

Pros: I used this motherboard with an AMD 1100T. Runs great, lots of SATA3 connections. USB powererd even when system off is nice as I charge my Droid on it. I also have a PS3 controller charging dock plugged into it and there is plenty of power to go around. I used a Cooler Master Hyper N520 and there is plenty of clearance for RAM with large heat spreaders such as the G.Skill Ripjaw series.

Pros: Very nice board all around, dual bios a +,,booted with no problems and runs stable with my set up

Cons: first and second pci-e slots to close together, making cooling while in crossfire a challenge, unless your water cooling.

Pros: 6 Sata3 (SATA 6Gb/s) and 4 USB3 ports all seem to have no problem with backward compatibility. Dropped it in added the CPU and 8 GB (G.SKILL Ripjaws Series 8GB (2 x 4GB)) of ram and it posted on the first try.

Cons: The side mounted SATA ports are a pain with my case as they are next to impossible to access without pulling my drive carriage out which is easy enough, but a hassle. The over-sized heatsink was almost too close for a standard AM3 cooler (ZALMAN CNPS9700 LED) to fit clamp on. It fits, but it is very close

Overall Review: Dropped a AMD Phenom II X6 1090T into this and we were off to the races. I did update the bios before I installed Windows 7 onto a G.Skill SSD and I had no problems at all. This is my third Gigabyte board and have been happy with all three.

Pros: this board has as much as boards $100-$200 more, dual bios, dual ethernet 3.0 USB & 6.0 SATA. didnt have 1 problem with installation, it runs cool, quiet and faster than a scalded ape I upgraded from a EVGA 590I am2 athlon fx X2 I put alot more money in that system and it was a good system but this just blows it away

Cons: I hate having to close my case even though it has absoluetly no bearing on preformance, this mobo looks so sexy !especially with the blue heatsinks on my G skill ripjawram and the gigbyte blue & white color scheme

Overall Review: most of the neg comments about this board on newegg, are due to people not reading the manual before installation, if you do get this board besure to read how to install the ram so you are able to run it unganged, I am sure there are some legit complaints, but this board is a good buy you get preformance and features of boards the next tier higher AMD Phenom II X4 955 Black Edition skill ripjaw DDR3 1600 ASUS HD4870 1gb 256 bit crossfire rdy Gigabyte GA- 890fx -UD5 Caviar Black WD1002FAEX 1TB 7200 RPM 64MB Cache SATA 6.0Gb windows 7 64 bit WOLFKING gaming board logitech G-500 acer x233H monitors 1 ticked off and jealous wife