Feel 100% satisfied with your purchase -- with no restocking fees & no return shipping costs* within 30 days of delivery. Learn More
Price Alert
Add To ListFound on 66 wish lists 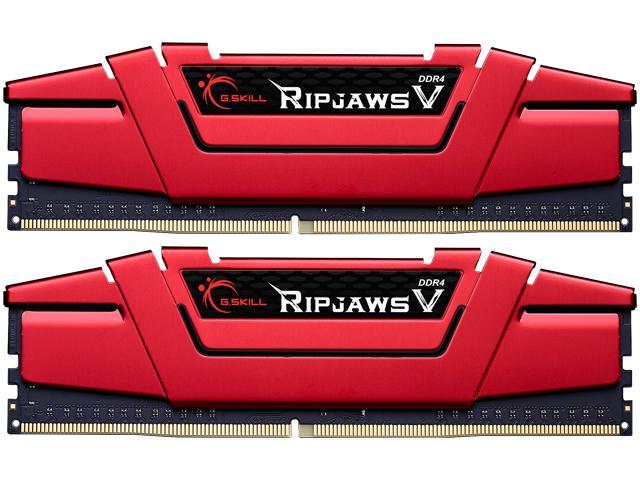 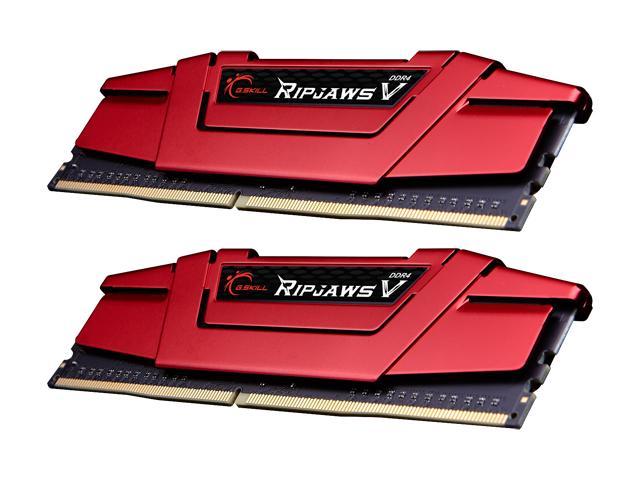 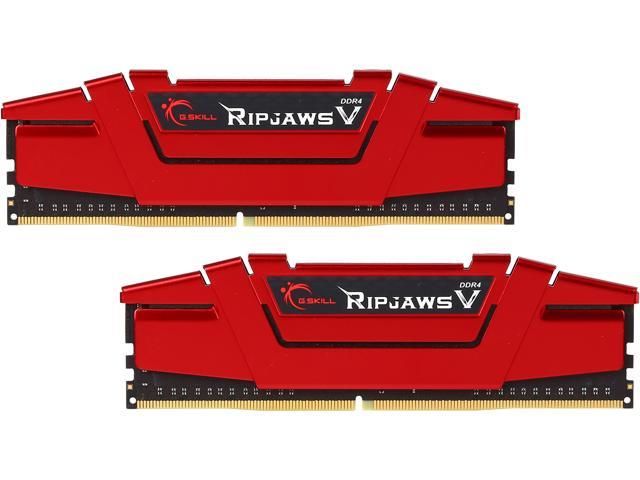 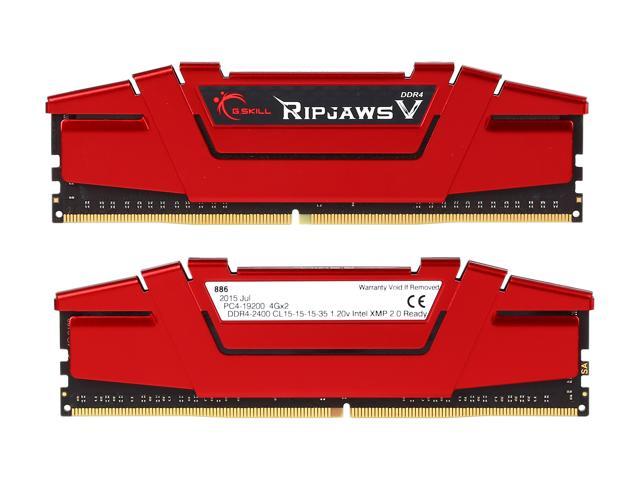 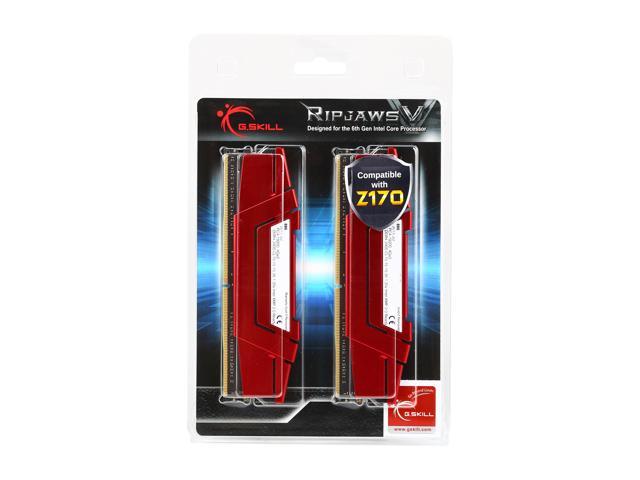 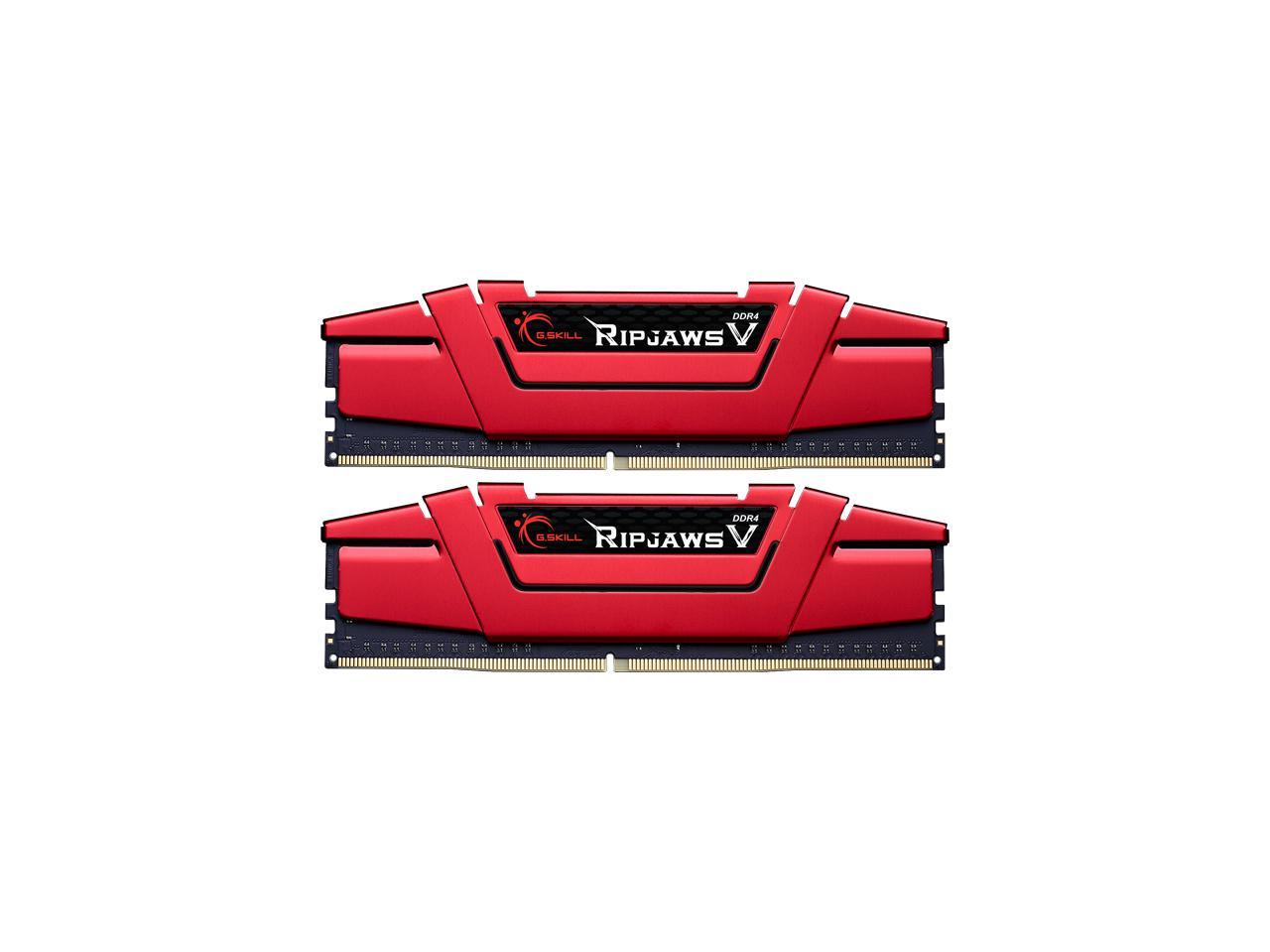 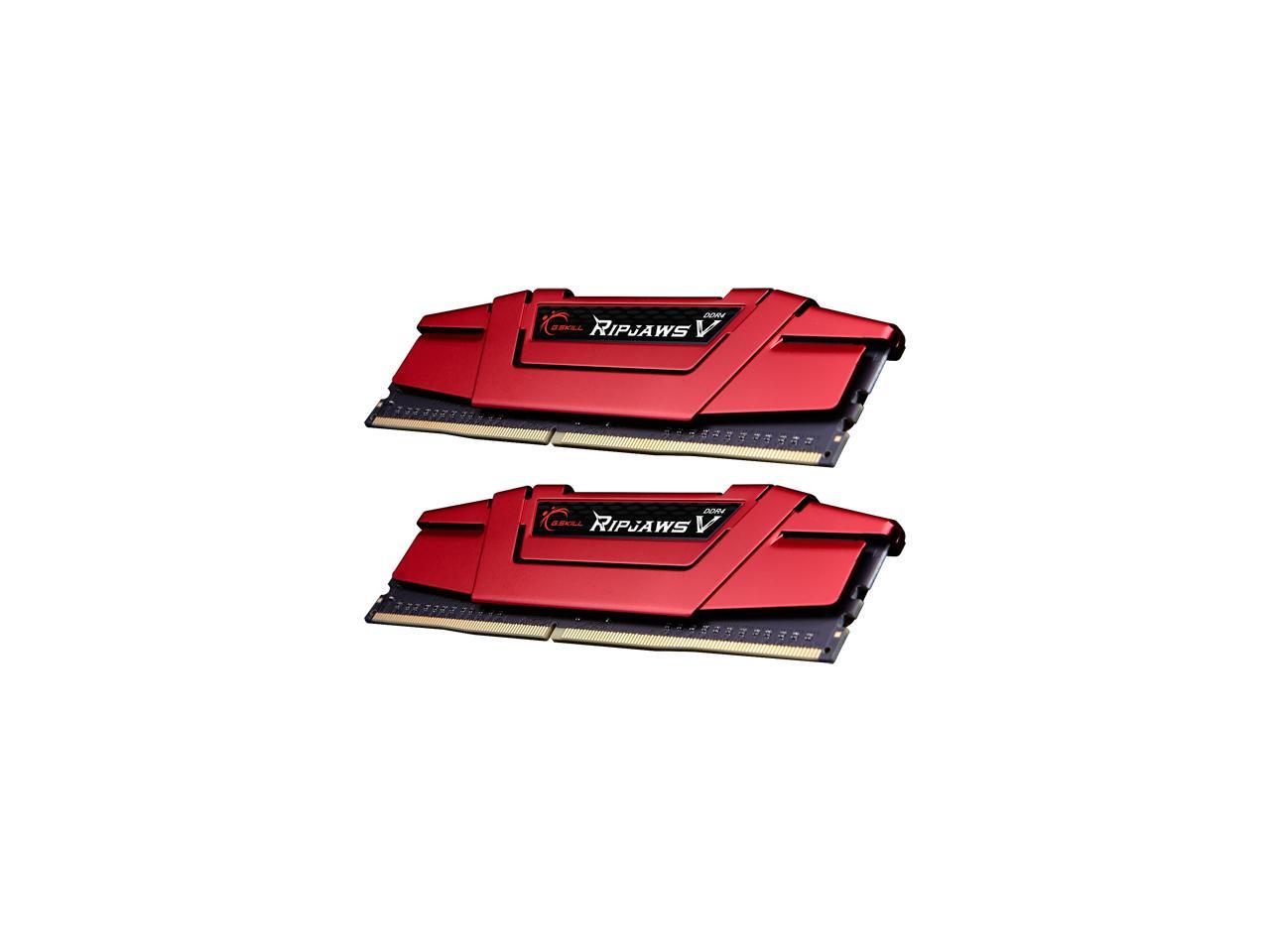 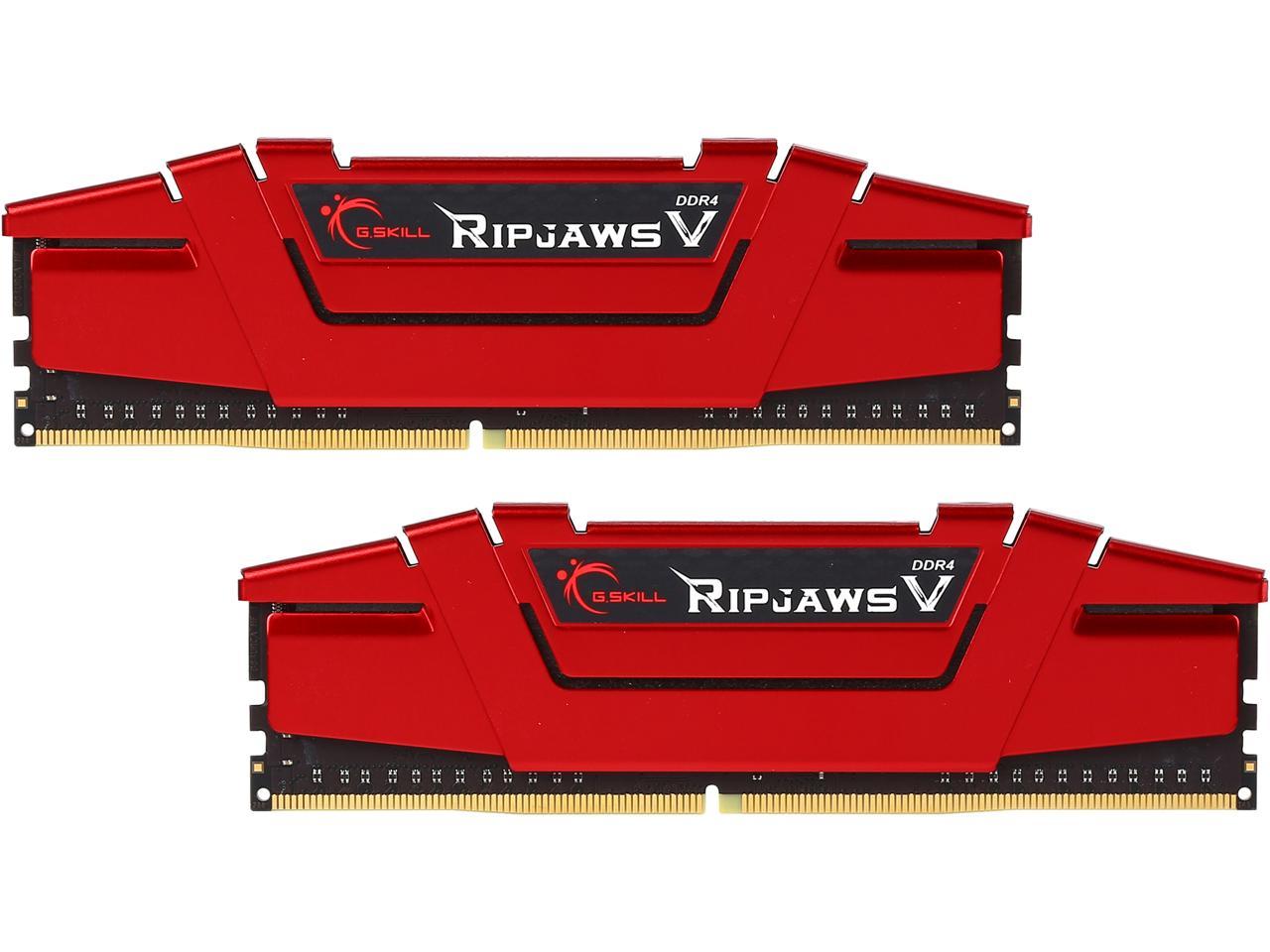 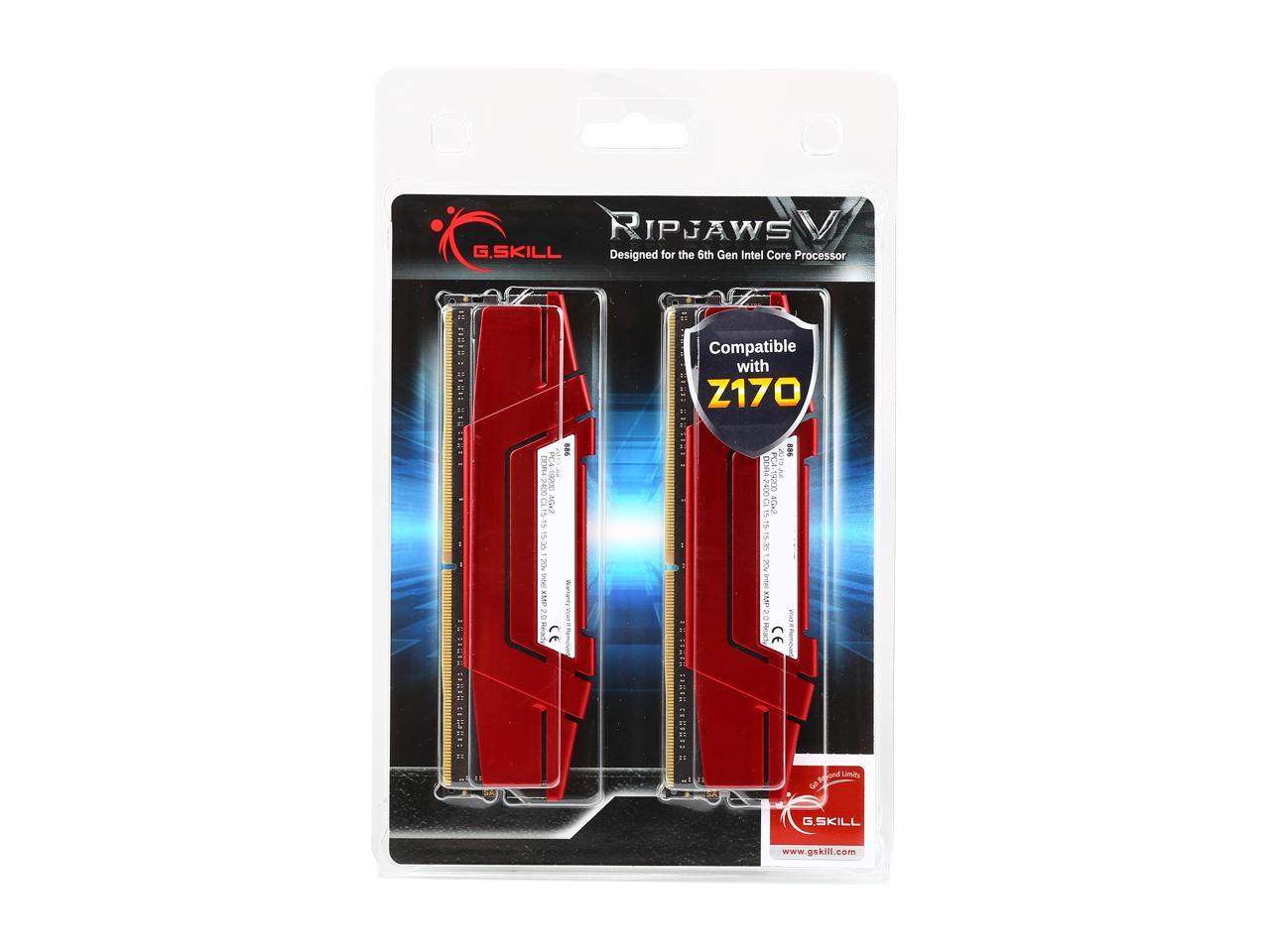 Feel the Rush of Ripjaws V

As the latest addition to the classic RipJaws family, RipJaws V series DDR4 memory is designed for sleek aesthetics and performance. Ripjaws V is the ideal choice for building a new performance system or for DRAM memory upgrade.

Rigorously Tested for Compatibility and Reliability

Each and every Ripjaws V DDR4 memory kit is tested with G.SKILL’s rigorous validation process on all major performance motherboard brands to ensure the best-in-class reliability and compatibility across the widest selection of motherboards.

Continuing the tradition of aftermarket CPU cooler compatibility, Ripjaws V is designed with a 42mm module height suitable for most oversized CPU heatsinks.

Just set and go. Program med with the latest Intel XM P 2.0 profiles, the only thing between you and overclocked performance is simple BIOS setting.

* The memory kit will boot at the SPD speed when BIOS settings are at default.
* For XMP enabled memory kits, enable XMP/DOCP/A-XMP in the BIOS to reach up to the rated XMP overclock speed, and system stability with overclocked memory kits may depend on the capability of the motherboard & CPU.

All G.SKILL memo products come with limited lifetime warranty and the G.SKILL technical team is always ready to provide consumers with complete technical support via online forum, telephone, and email.

Pros: Perfect ram at 2400. The Intel memory profile works on the MSI B350M motherboard. Booted up with Ryzen R5 1600 1st time. I bought this ram 1 year in advance knowing Ryzen was going to use DDR4 2400 and so I held on to till I got the Ryzen CPU and Motherboard.

Overall Review: I do recommend this ram but in all honesty I would wait on building a new PC right now while the ram is expensive. If you see an exceptional deal on something then go for it.

Pros: No problems with this memory at all. Boots up every time.

Cons: No cons whatsoever except for the current pricing.

Overall Review: I can't understand how this memory has more than doubled in price since 2016. I paid $69.99 for the same memory in 2016 from Newegg. Would like to buy some more but this is outrageous.

Pros: I really wanted another 16gb but..

Cons: Why did this double in price since the last time i was here? I bought these sticks for 90 bucks what happened?

Overall Review: Bought this RAM back in September 2016. RAM is still Running Strong. But my, oh my, has the Prices changed. It was $62.99 back in 2016, now I wish I had bought more RAM back then. Solid RAM and I highly recommend it.

Pros: Great ram never got a error on the screen for them

Cons: None that i can think of

Overall Review: Get them when they are on special

Pros: I've been running this RAM for a couple of weeks. This set had the best combination of price, speed, and timings for 64GB (4 x 16GB) 1.2V kits.<br><br>When I initially installed the RAM it ran at its default non-OC (JEDEC) speed of 2133 out of the box. I selected XMP in the UEFI BIOS, and everything automatically switched to the OC specs of 15-15-15-35, 2T, 1.2V, DDR4 2400.<br><br>Prior to this set I was running a 32GB (2 x 16GB) set of G.Skill Aegis DDR4 2400, but I found the cheap Aegis stickers annoying. Since I wasn't thrilled with my 32GB Aegis set, when a deal came up on this set, I decide to purchase it. I do a lot of multitasking with several programs open at the same time. Under Windows 7 I would occasionally max out the memory usage. Windows 10 seems to be more efficient with memory usage, so I doubt I will ever utilize more than 32GB of RAM.

Cons: G.Skill and most memory makers do not guarantee two kits of RAM to work together. So if you are hoping to use two of these kits on a MB that supports 8 x 16GB RAM, you would be better off buying a single 8 x 16GB kit instead.<br><br>It would alleviate so much confusion for buyer's who don't know how OC'd RAM works if manufacturers would start listing how OC'd RAM works on the packaging and in the details. This is something that all RAM manufacturers are guilty of.

Overall Review: For those who don't know how OC'd RAM works. It is usually set to run at JEDEC (non-OC) speed out of the box. You usually have to go into the UEFI BIOS and manually set the bandwidth, timings, voltage, and command rate, or select XMP (if you have a MB and RAM that both support XMP) to get it to run at the advertised OC'd speed. If you are not familiar with setting up OC'd RAM contact the manufacturer.<br><br>Many OC'd RAM sets have less than five egg ratings from system builders who don't understand that OC'd RAM usually needs to be setup in the UEFI BIOS, so they assume there is a problem with the RAM when there isn't.<br><br>System Information:<br>ASUS ROG Maximus VIII Hero Alpha Z170<br>Intel i7-6700K<br>Zalman CNPS9900MAX<br>Arctic Silver 5<br>EVGA GeForce GTX 670 SC 4GB<br>4 x 16GB G.Skill Ripjaws V DDR4 2400<br>2 x Seagate Constellation ES.3 2TB SATA3 HDD in RAID 1<br>2 x ASUS BD-RE Burner<br>Corsair AX1200i 1200W PSU<br>Cooler Master HAF X Full Tower Case<br>Windows 10 Pro 64-Bit<br>4 x ASUS VS247H-P 23.6" LED Backlight Monitor

Pros: Just out of curiosity, I tossed a pair on X370 motherboard to see if they work with Ryzen, The answer is yes. I am fully aware G.skill has made a new product line called Flare.X specifically designed for AMD Ryzen processors, But I am always curious if other product lines work.

Cons: The price of those almost doubled since last year.