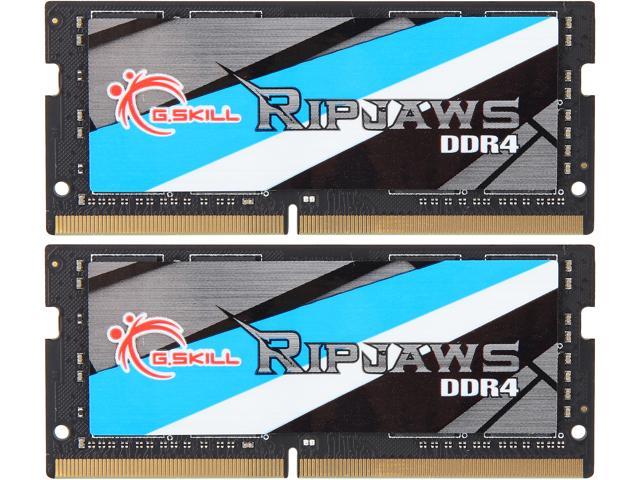 Feel the Boost in Speed with G.SKILL Ripjaws DDR4 SO-DIMM

Make everything you do on your laptop faster and more efficient than ever before with G.SKILL Ripjaws DDR4 SO-DIMM. This memory kit offers optimized compatibility with 6th gen Intel Core processors. It provides faster data transfer and higher energy efficiency than ever, and features auto-overclocking that allows qualified systems to detect the highest available speed and automatically adjust BIOS settings to match. Build your mobile workhorse with G.SKILL Ripjaws DDR4 SO-DIMM, and run demanding programs faster and easier.

No more messing around with manual BIOS settings. G.SKILL Ripjaws DDR4 SO-DIMM series feature auto-overclocking. Once you install the memory, qualified systems will automatically detect the rated overclock speed and you can instantly enjoy the performance boost. It’s that easy. Designed for Ultra Performance and Reliability

The new Ripjaws DDR4 SO-DIMM is compatible with the 6th gen Intel Core processor on laptops and small form-factor PCs that support DDR4 SO-DIMM memory. It is one of the easiest and most cost-effective ways to upgrade your PCs, whether it's for gaming or working. Cons: - The CL timing could be a bit lower, however due it's fair with it's price. The price of a lower timing doesn't justify it's costs

Overall Review: - I bought a G.Skill 6 years ago for my old laptop and it's working perfectly. That's the reason that made me bought a RAM of the same brand for my new laptop - It was installed on a Lenovo Y540 laptop

Overall Review: I honestly don't know how to review RAM other than to say it works. I can't leave a review without typing something, so here it is. If you find it at a deal like I did, definitely spring for it.

Pros: work good and fast, no problems at all, this is the fifth set i brought, all them good

Pros: Can't think of a pro when there are intermittent issues.

Cons: Intermittently won't boot in my laptop. The power button will just flash. I spent hours and hours trying to resolve the issue. Sometimes it would boot fine. Usually it wouldn't boot after I would move the laptop. The laptop could be asleep or shutdown. I move it and the computer wouldn't boot. I rebuilt the SSD (even bought another one), reloaded windows, and pulled my hair out. Finally I decided to try other RAM. The other RAM would work every time. I could spin the laptop around and it would always boot or wake up. I reinstalled the G.Skill RAM, making sure it was properly seated and it would fail when the computer was moved. I tried one stick, both sticks, sticks in combination with other sticks. As long as at least one of these G.Skill sticks was in the computer, it would have this problem.

Did you find this review helpful?
Manufacturer Response:
. Dear Customer We are sorry to hear you had such issues. That is quite a strange problem, please send the memory in for RMA exchange to see if a replacement kit can work better. This is a plug and play kit that should work well in any system that can support 16GB of DDR4-2666. For any questions or concerns, please feel free to contact us directly for assistance. Thank you for choosing G.SKILL Quality and customer service are our top priorities. To check or report a technical problem, please visit the Official G.Skill Technical Forum: https://www.gskill.us/forum Tech Support Email: ustech@gskillusa.com RMA Dept Email: rma@gskillusa.com

Pros: - The price/value for this module set was amazing. - G.SKILL has been a solid memory line for my usage for nearly 10yrs. - Easy packaging and fast shipping/delivery.

Cons: - Haven't had any issues with this set.

Overall Review: - I would HIGHLY RECOMMEND this product for buyers. - Keep in mind that the module sets definitely have difficult subtleties in model #s and thus RAM speeds, CL timings, etc. so make sure you pick the right combo for your applications.

Pros: what to say...works as advertised and comparable price, no issues. (upgraded my alienware m17)

Overall Review: So worked just long enough to get past the return date. Laptop started freezing up a few days ago and after running some memory diags found out its bad. Replaced old memory and everything is fine again. Have to now go through the hassle of trying to see if G.Skill will replace or not directly.

Did you find this review helpful?
Manufacturer Response:
. Hi Jason All G.Skill memory kits are backed by a manufacturer lifetime warranty. As long as the item is in original physical condition and not damaged or altered, we will gladly exchange them with new ones that should work flawlessly. Visit the G.Skill website for complete RMA procedure. For any questions or concerns, please feel free to contact us directly. Thank you for choosing G.SKILL Quality and customer service are our top priorities. To check or report a technical problem, please visit the Official G.Skill Technical Forum: https://www.gskill.us/forum Tech Support Email: ustech@gskillusa.com RMA Dept Email: rma@gskillusa.com

Pros: Installed it on my Alienware R3 15 laptop and the BIOS automatically recognized the speed and capacity. No need for additional configurations.

Cons: A bit pricey, buy it on sale