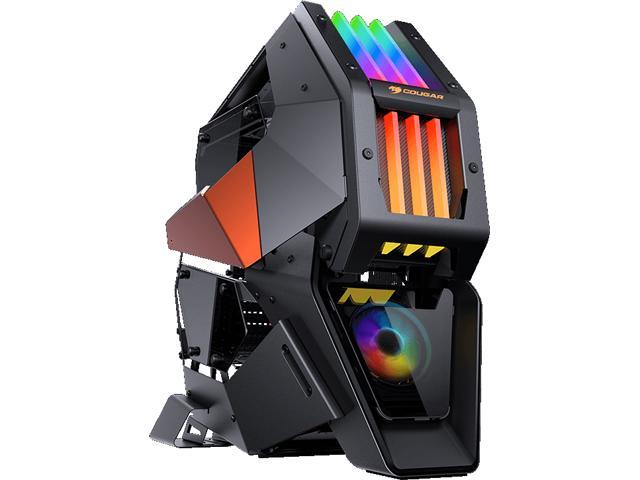 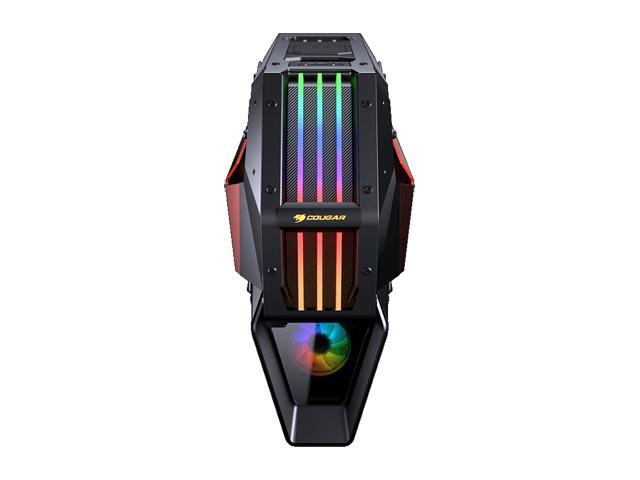 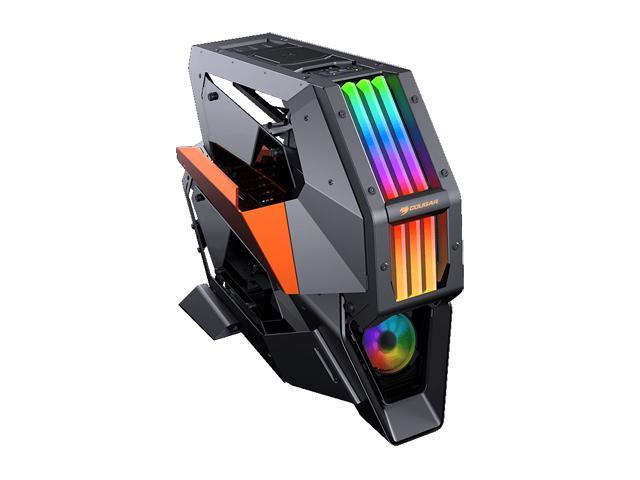 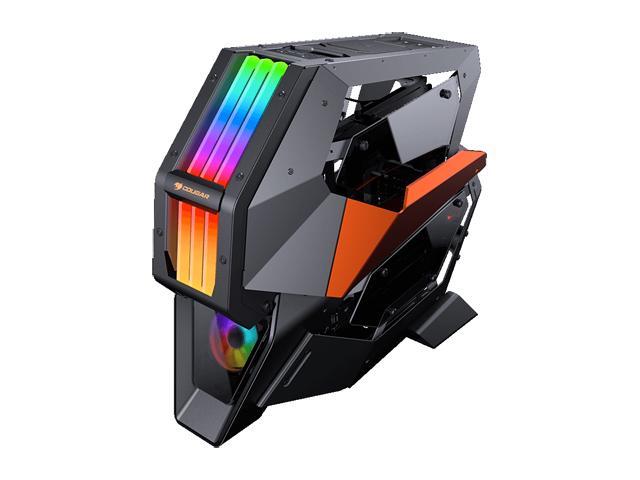 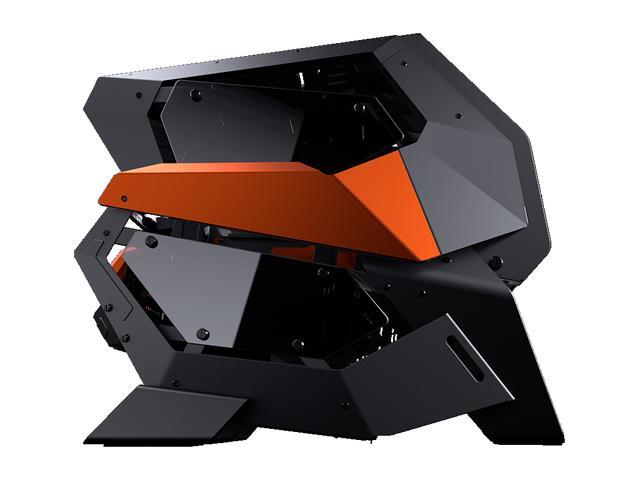 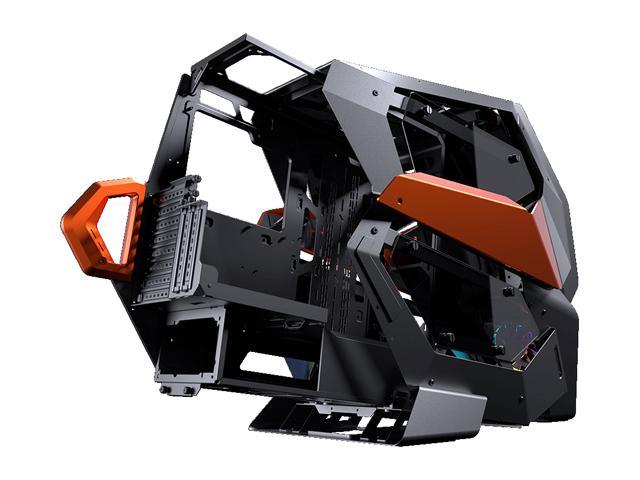 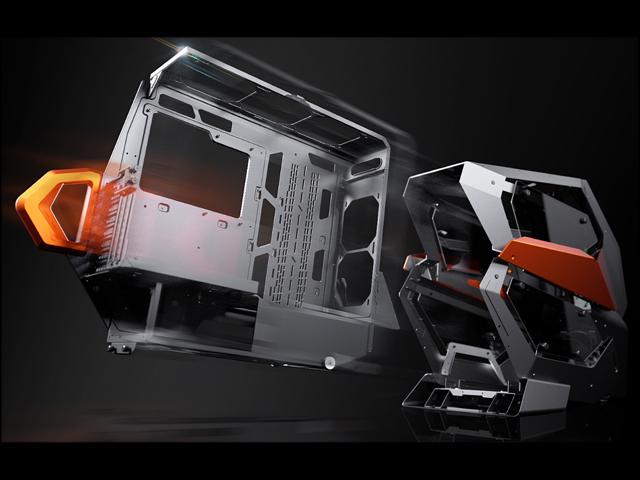 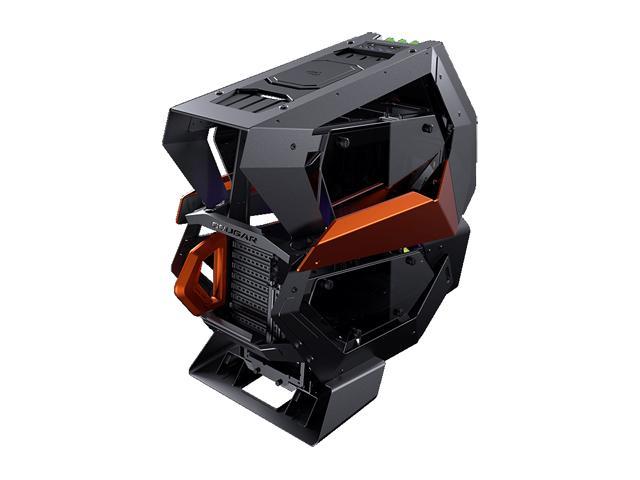 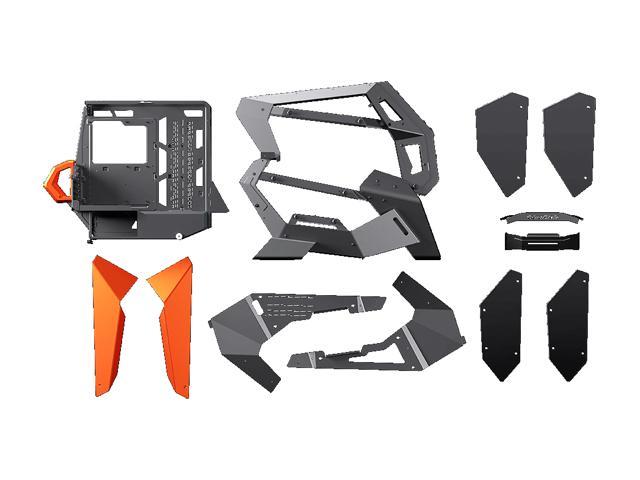 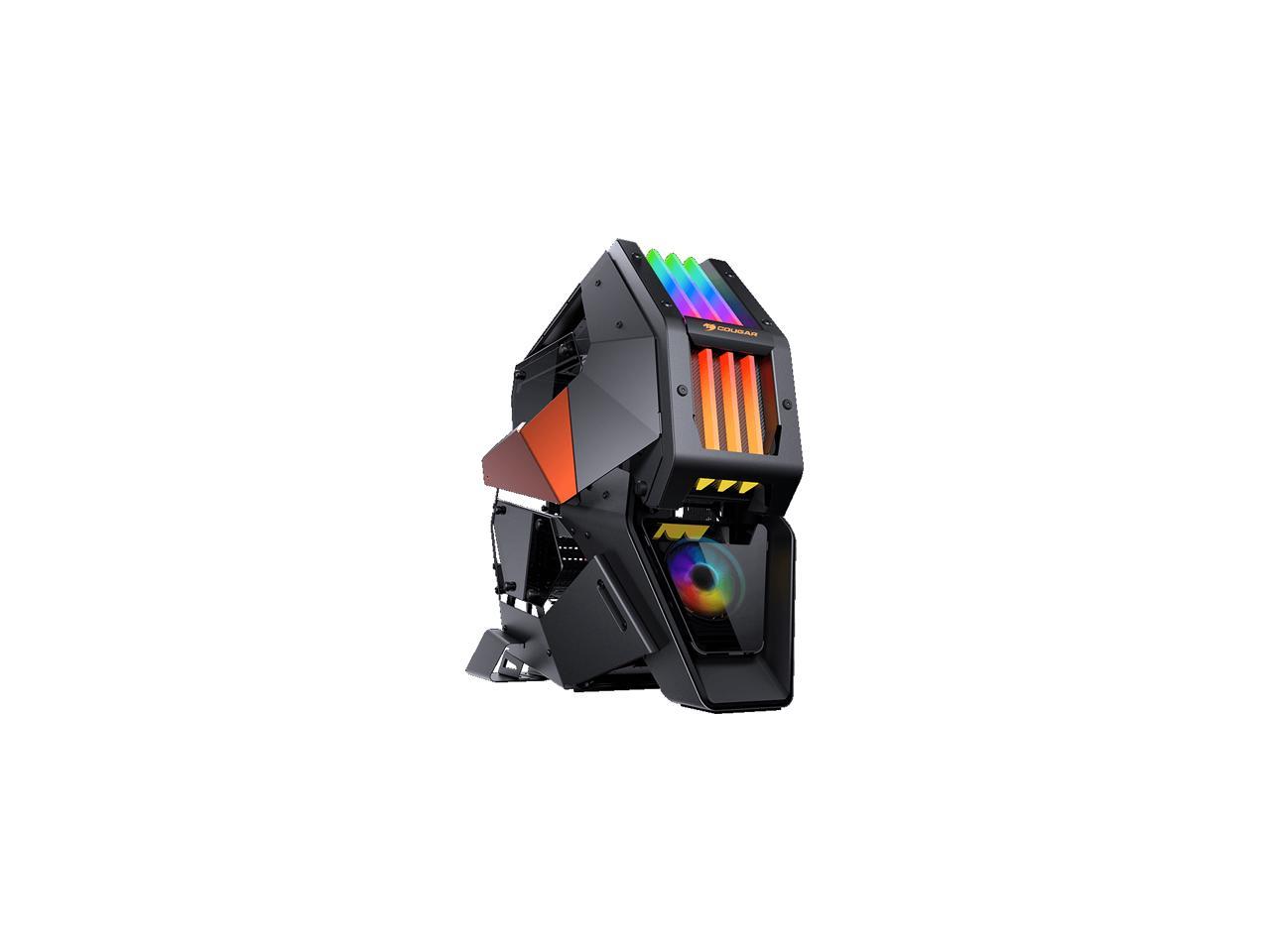 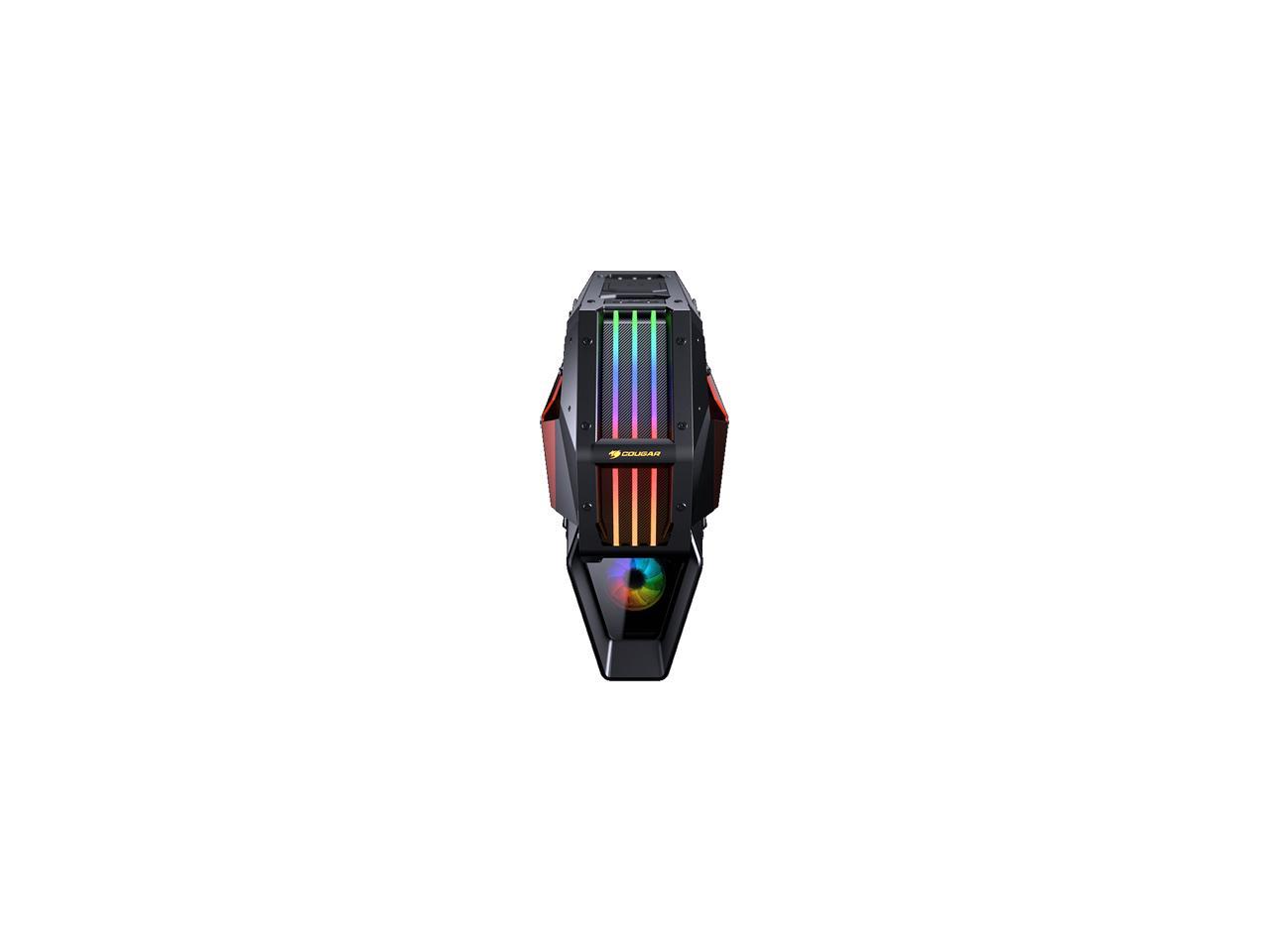 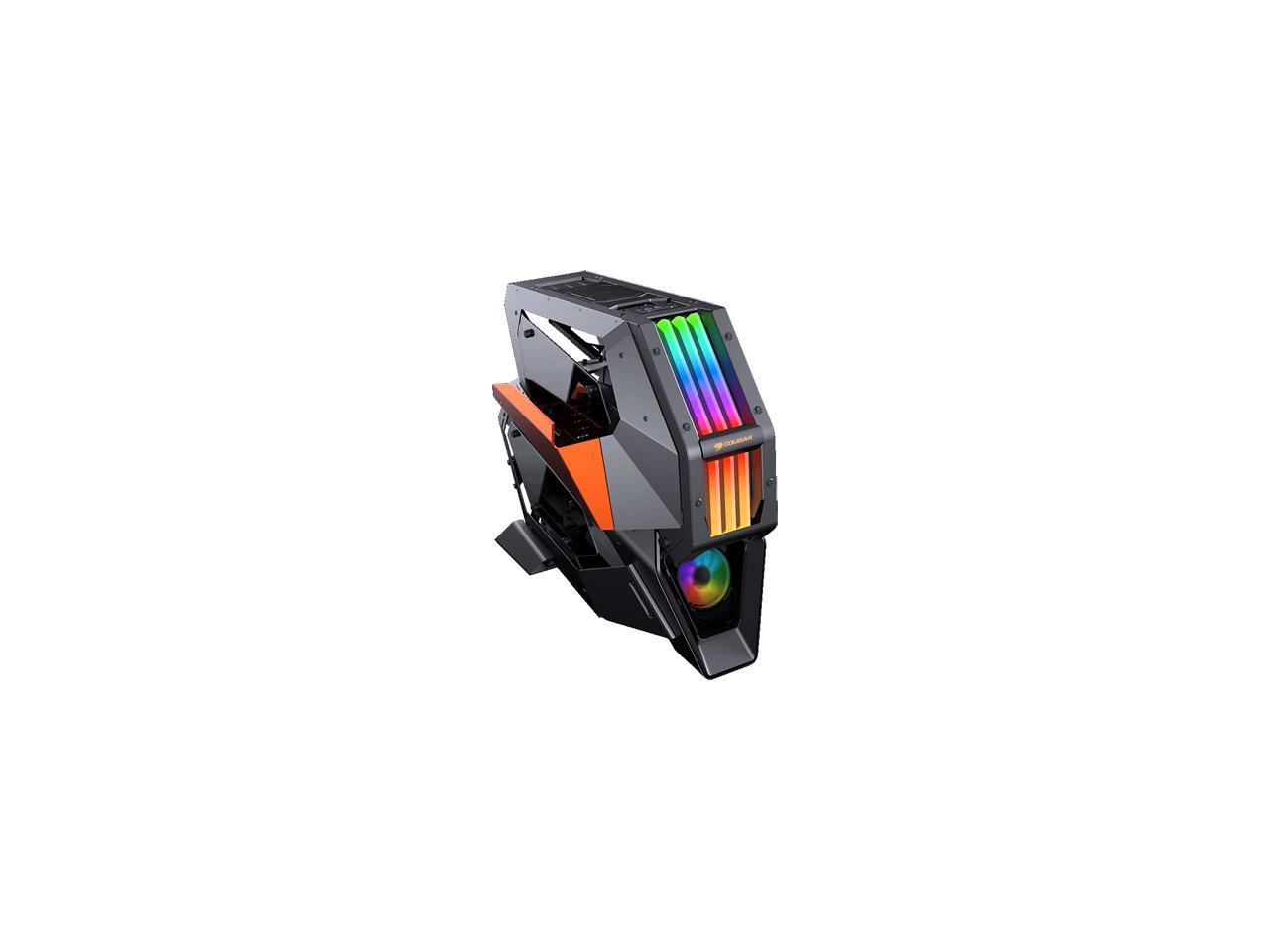 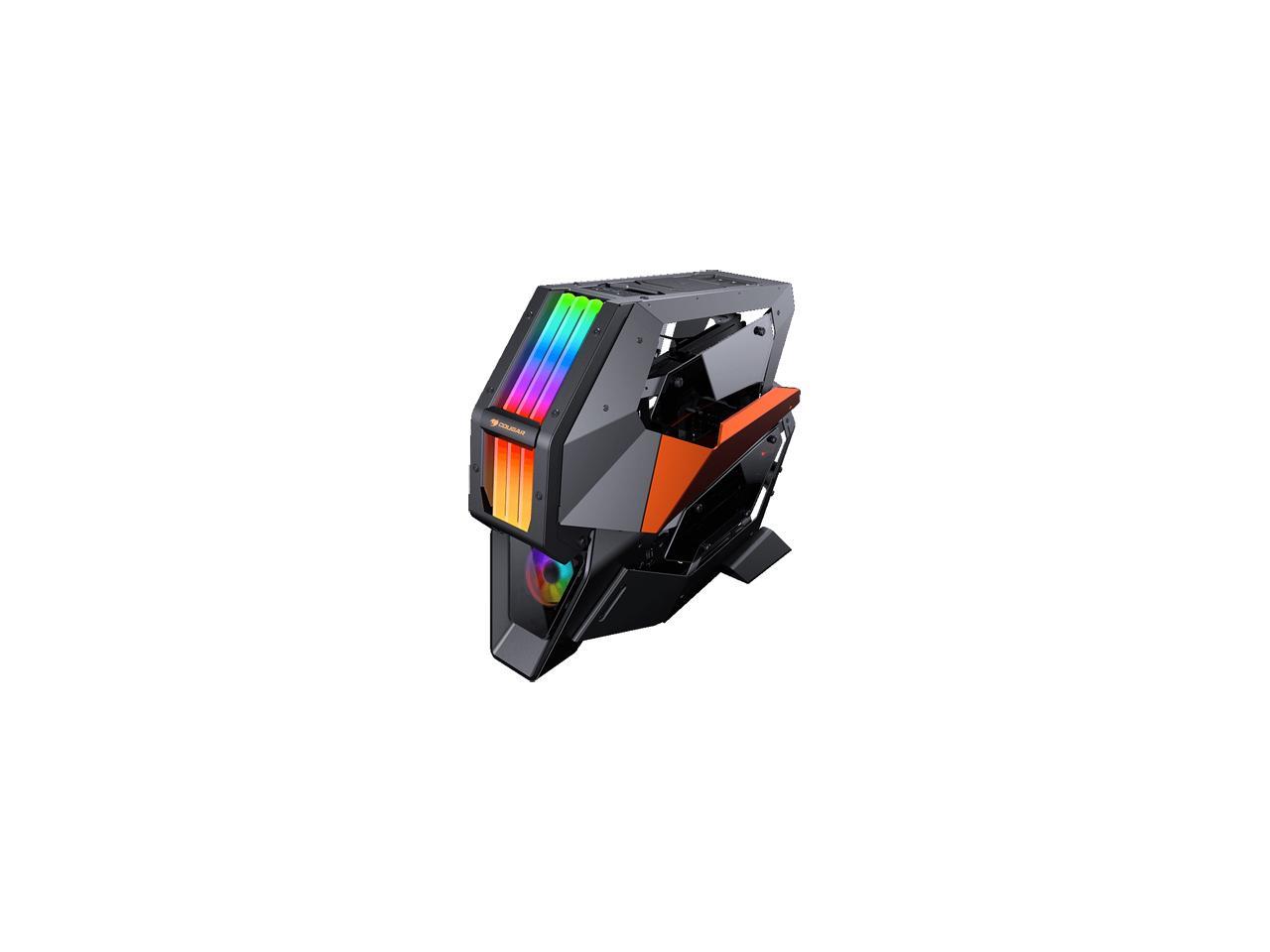 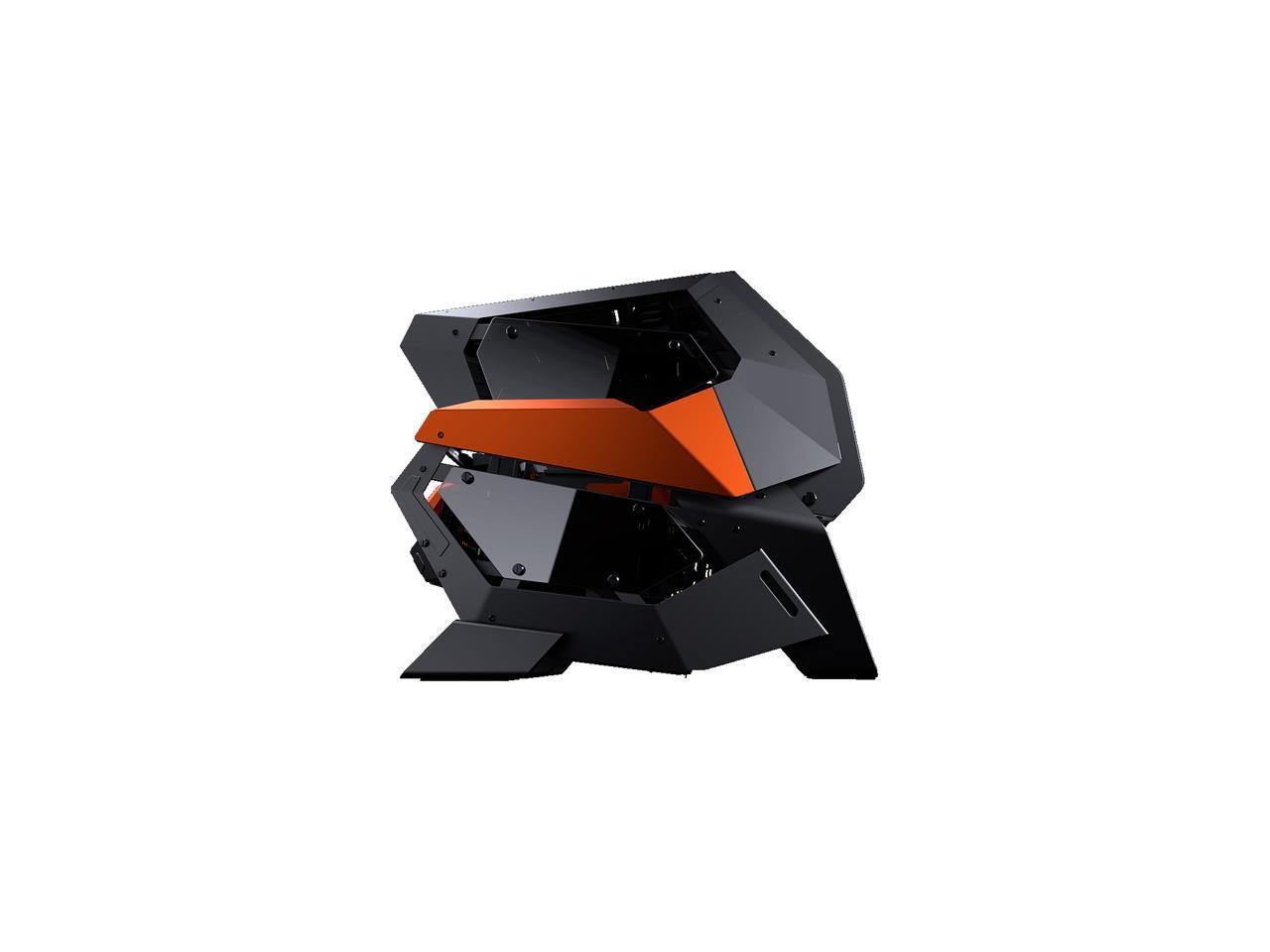 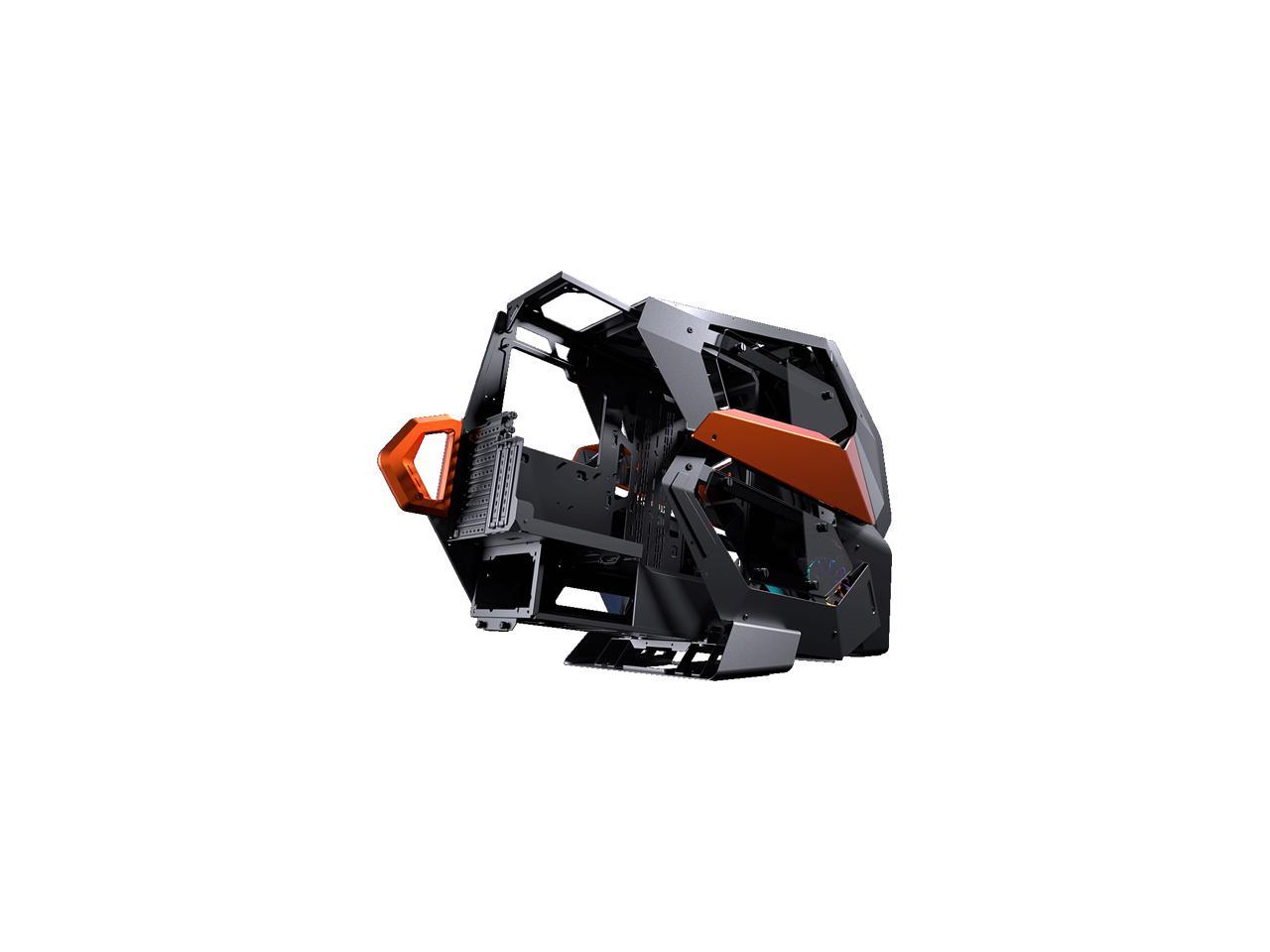 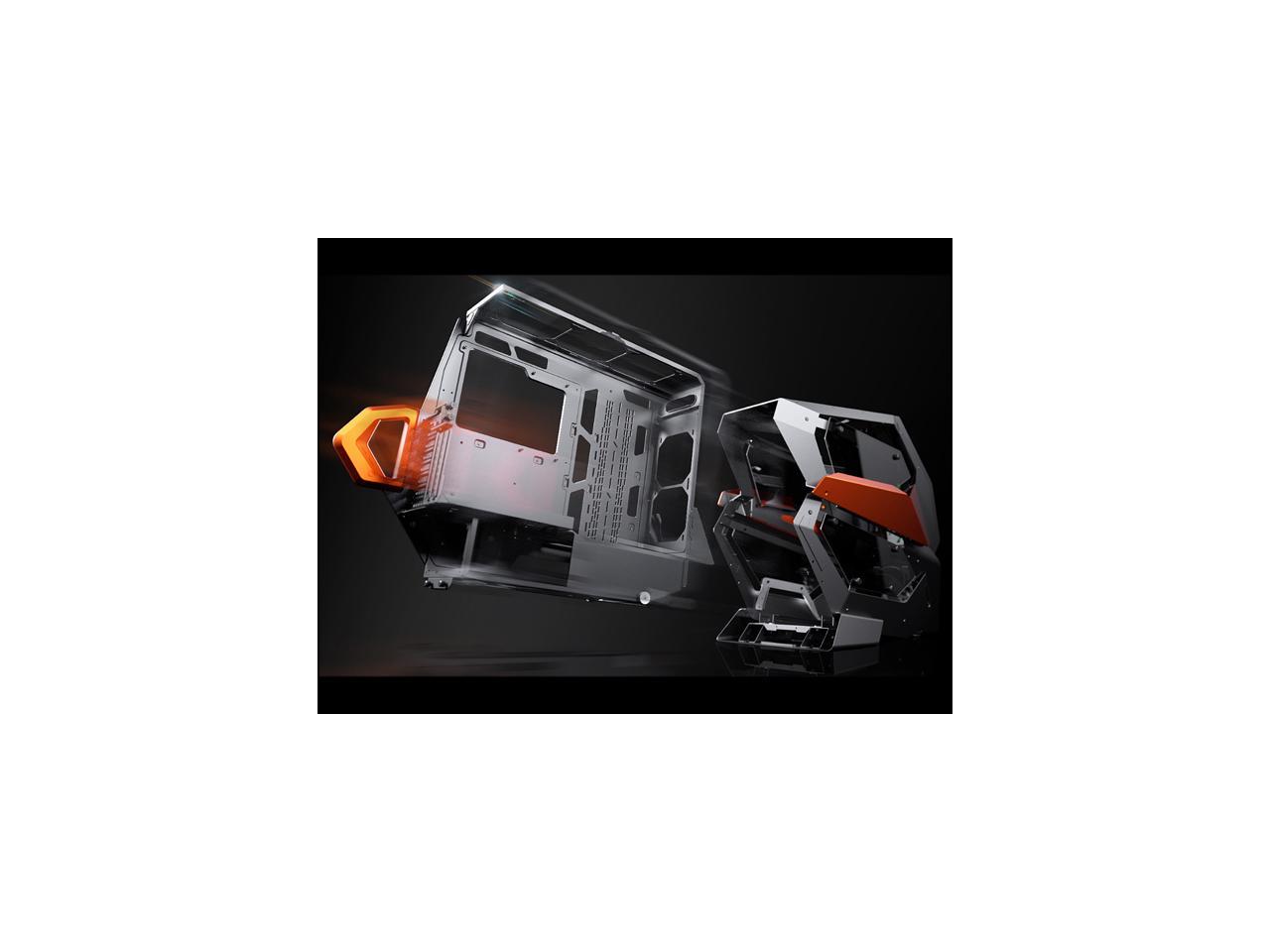 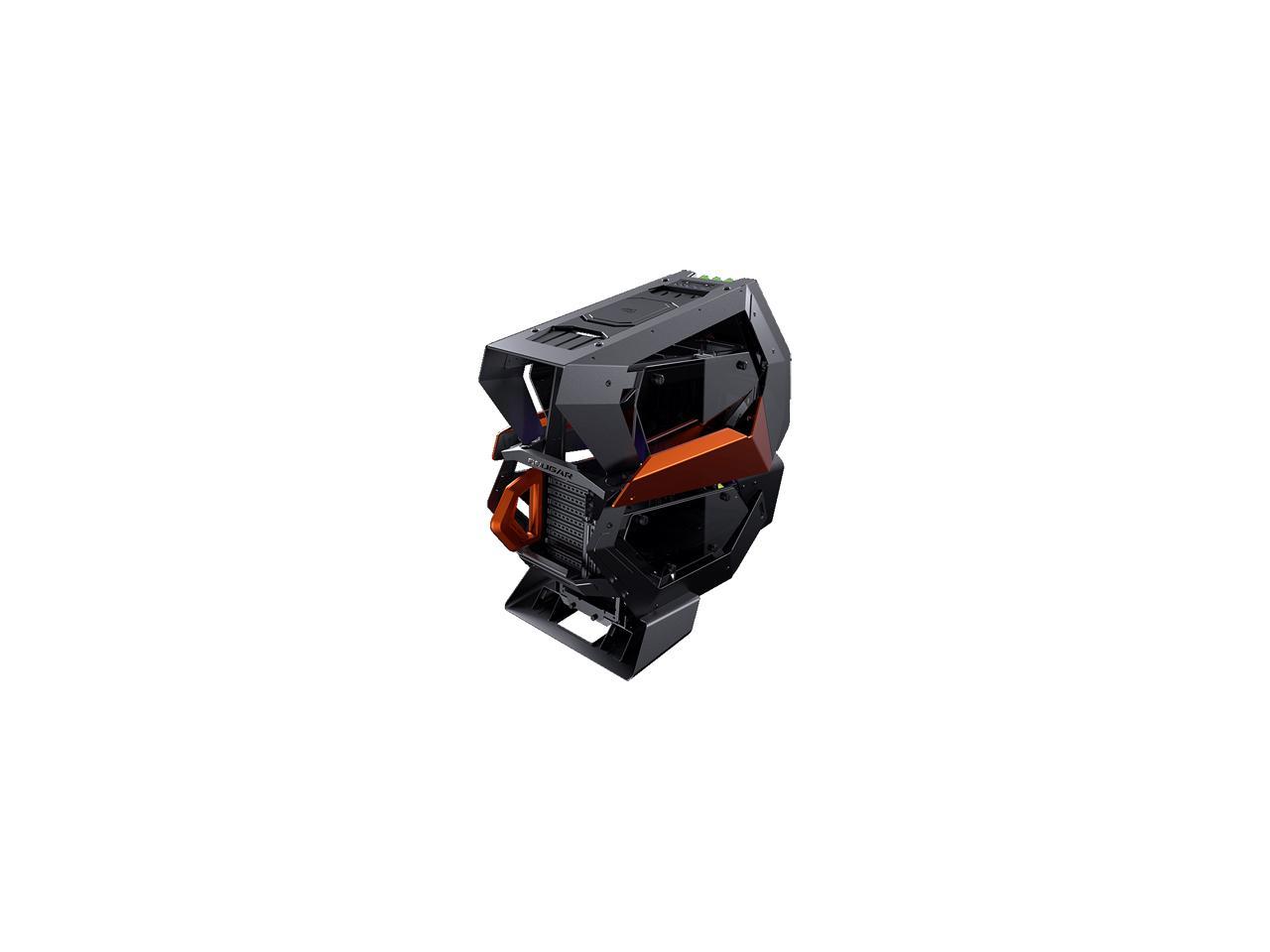 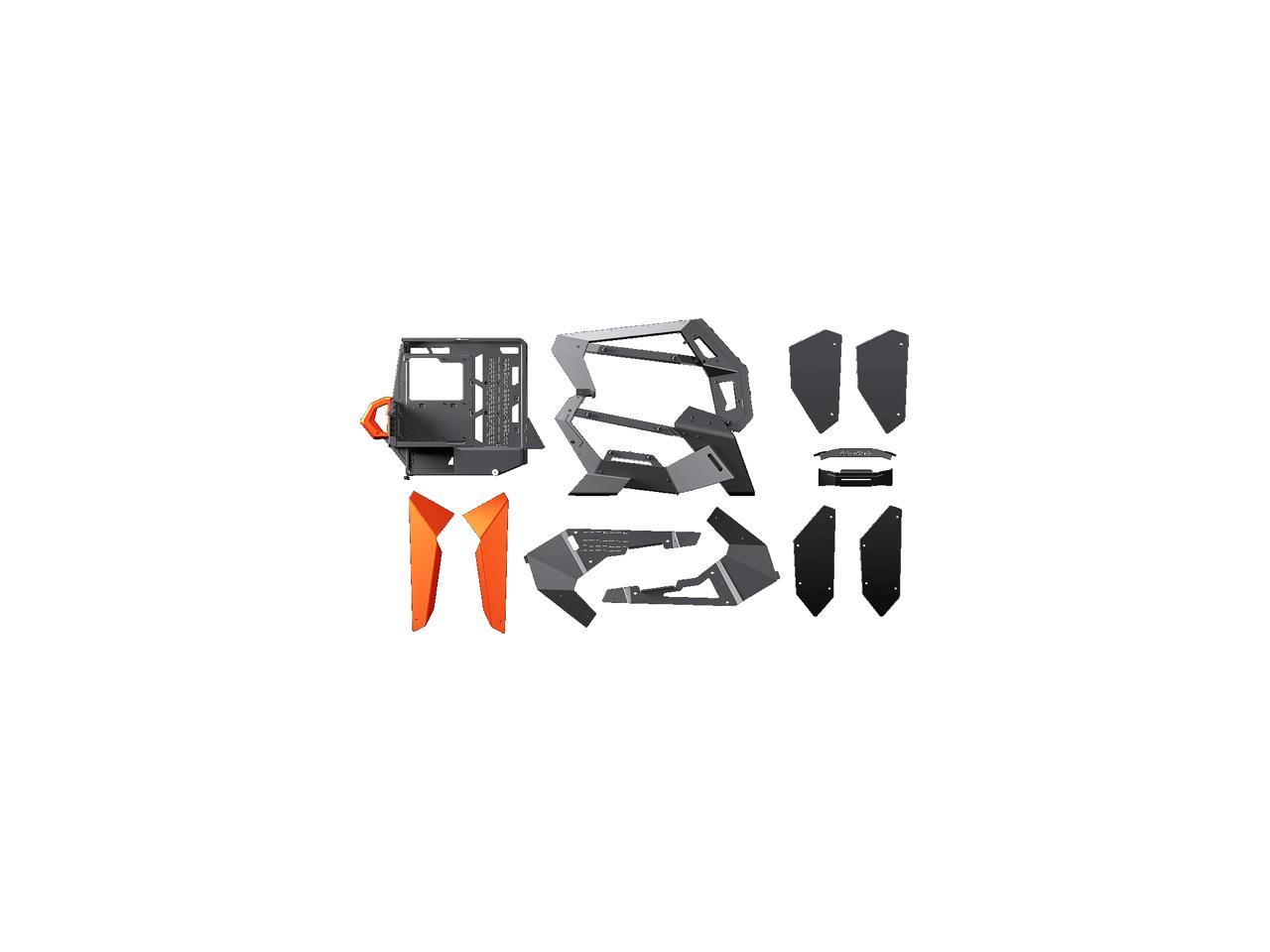 All New Ultimate Gaming Case
Beyond Your Imagination

* ARGB fans are optional, specifications might vary depending on the country or region of sale.

A superior combination of metal frames and four tempered glass panels allow you to show the high-end components and to create an amazing masterpiece beyond gamers’ imagination.

* ARGB fans are optional, specifications might vary depending on the country or region of sale.

Conquer 2 breaks away from traditional case designs. It provides an easy way to customize and modify the case. Your bold modding concepts are achievable with creation of unlimited. A modder’s dream come true!

COUGAR’s new Trelux technology provides Conquer 2 with a powerful lighting system of its own, the Trelux dynamic RGB lighting will amaze everybody! Trelux can also work connected to a COUGAR Core Box or to a compatible motherboards’ 5V connection for system-wide lighting synchronization.

Cooling is a critical factor for gamers, overclockers and PC enthusiasts in general. With support for 360mm radiators and metal open-frame design to achieve extreme cooling performance.

Pros: - Materials are excellent quality aluminum and glass - Components are easy to put together.( the large bolts work well ) - Sturdy - The hard drive docking bays on the backside are a cool touch - Very easy access to backside for wire management

Cons: - The front panel screws are hard to remove and put back on due to narrow case holes - Hard to reach hand under glass to turn the PSU on. ( but once its on, the front panel buttons are really cool and have nice feedback ) - A wee difficult to lug the case around since its hard to determine which bars are suitable for lifting. but obviously dont lug a computer around too much...

Overall Review: - I bought a large AIO for my cpu and the radiator didnt fit but luckily i was able to shove it under the top hood and use the case fans to keep air flow going. thankfully that top hood exists or i wouldve been in trouble. This case is seriously awesome. Get it.

Pros: *This case looks like a decepticon sitting on your desk. The angled aluminum and glass pieces give it quite a stance and the RGB looks really cool without being overwhelming. *There is plenty of room to move and work inside the case and most of the panels are removable to allow access to hard-to-reach parts. *The sub-cassis slides out and you just drop your motherboard in, plug in all your hardware, and slide the sub-cassis back into the case. Easy!

Cons: *This is a challenging case to work in. I consider myself an experienced system builder (have built about 8 to 10 systems in past years). I have never gone out on a limb and built anything this unique and there WERE challenges. *Cable management is key, loose wires will get caught on sharp edges trying to slide the sub-chassis back into the main case. Zip tie everything down tight! *I hated this case while I was building it, but after it was done I'm quite happy with the end result. *The front panel USB/Audio connection is all run through a removable hub piece that screws into the top of the case. MAKE SURE YOU GIVE THIS PART PLENTY OF SLACK! I had to go back and bust loose all my zip ties and re-route the cables to the front panel through a different part of the case to allow for enough slack for it to slide in. TEST FIT EVERYTHING FIRST!

Overall Review: *Looks awesome! *Takes time and patience to build (if you're looking to slap together your system in an hour or two, this case is NOT for you). *Overall I'm very happy with the finished result. *Size is an important factor here, this case is HUGE AND HEAVY! Pay attention to the dimensions and make sure there's plenty of room on your desk.

Pros: -Looks like nothing else -EZ to put together if you are patient and lay everything out -Extraordinary build quality, machined properly and precisely, on mine at least, rubber spacers are in solid -Lots of room to customize interior -3 matching case fans included -Looks like a premium setup for a custom build water cool system, but that was out of my budget, mounted the hard drive holder bracket where cooler pump could have gone instead of in front of fans like it says in manual. -Super solid case. Quality is tops. Covers on both sides are solid. -I recommend using the included grills to finalize your build even through they may require longer screws than standard. Looks good.

Cons: -If they could have made a location for a single slot CD drive would have been nice, but I'm just going to mount a slot insert cd drive under the glass were second 3.5" drive would have gone and will be able to insert from back, will require custom bracket, but hey, it's a custom build right (enough holes in case for me to work with to do this). -Nothing else really, usb ports on top are tight, but after some use loosened right up -Not a lot of USB slots, but the lack of clutter is worth it -Case is thicker machined metal, had to purchase some longer screws in order to mount a few items (also worth having the thicker machined metal as opposed to the convenience.

Overall Review: -The 3.5" hard drive mount is actually really cool. It can be used to display on the back and can run cable around it to make it look pretty cool. Yes, if you ever to want to replace or add sure you have to take off the motherboard. Oh and don't forget to mount those 3.5" HDDs at the beginning of your build if you choose to use. Will have to back track if you forget. -I highly recommend this product -Only my second custom build and I breezed through the case portion at least -Ryzen 7 3.4 -GigaByte Gaming K7 -G.Skill Trident Z 3200 16x2 -240 Cool Master fit like a charm -2 x XFX Radeon RX580 -Cougar 1000 PSU -HDD WD 1 Tera(3.5), SDD 240 adata -Chose this case because I could not stand the thought of another standard boxy case. I was on a budget, but really just sacrificed some storage which I will just add later and not overly important for the way I use it. -Cable management was a challenge, but very doable and kind of fun. My Cougar PSU cables were plenty long, and the plastic holders included with the case were sufficient. I used a lot of them, but still had some left over.

Pros: I had no problems putting the case together

Cons: if u using a HDD or a SSD drive make sure u screw those in the back first before you screw your motherboard in cause I mess up on that Lol....

Overall Review: I love the case been wanted the case for a while now but anybody looking for a open air case this is the one for u

Pros: Very beautiful loving the color orange they chose for the panels it's more of a reflective orange kind of like a Ferrari with that metallic Orange power button is on top along with mic and headphone port with two USB ports and 1 USB C 3.1

Cons: LEDs are not as advertised more of a thin piece of plastic rather than what it looks like in the image where it is a big wide piece but that could be due to the LEDs being on. Some of the side panels that are orange are defective has if someone accidentally smudged it with their finger as it was drying

Overall Review: Overall a really beautiful looking Tower perfect for what I'm going for my dad's favorite car was Ford Mercury Cougar which is nearly impossible to find Sean memories of my dead dad I decided to go with the cougar conquer 2 loving that the cougar logo is literally carved out of the back of the metal it may not be a vehicle it may not be what my dad had but this cougar is definitely going to be way faster LOL

Pros: The aesthetic is radical and gorgeous! If you want a bold and aggressive-looking machine, search no further! An open case design of glass and metal that's great for showing off the innards of your rig, whether it's a liquid cooler, custom lighting or just the naked tech beauty of a well configured machine.

Cons: It ain't easy to assemble. You practically have to put the case together AS you're assembling the internals. Took me a LONG while till I figured out where my old hard drives were supposed to go! These killer looks are not easily attained, but if you're not under time constraints and read the (minimalist) instructions CAREFULLY, you will be rewarded!

Overall Review: I first saw this chassis a couple years before I bought it and couldn't get it out of my head. I hadn't even decided to do my first ground-up build, but this out-there design never left me. I read all the reviews about how hard it was to put together, and some complaints about quality control. But when the stars at last aligned (and some sale prices kicked in!), I went for it and I'm still glad I did! As I mentioned above, this is no simple assembly. The instructions can be opaque at times and I was learning as I went about the whole process. Still, nothing's THAT complex about these beasts in this day and age, so I went slowly and carefully and now I have this magnificent custom rig! Again, not for Mom and Pop Computer User, and I added a couple more fans to complete the look, but if you're of the this bend of mind, the pix included say all that you need to know!

Pros: Amazing design, decent support for most builds and coolers, easy to disassemble.

Cons: Plastic sides being orange keeps you from doing color-themed builds the slide-out mechanism is a bit tricky and hard to slide back in if you install fans on the top rail. Having to disassemble the front button box to get the chassis to slide out can be tricky with wire management and also when re-sliding the chassis back in.

Overall Review: An amazing case, a bit tricky to build in but overall love the case. The reason for 1 egg is the RGB died within the first few days, did my best to contact support about it. But after 4 weeks with no response, I'm stuck with a case with dead RGB and no way of replacing it.

Cons: A bit of a pain to build in and the price is a little on the high side

Overall Review: I love the case design but didn’t really care for the orange so I was able to spray paint this hot mama to the colors I desired and it looks fantastic! It was pretty hard to install pc parts, it was a little enjoyable and stressful at the same time.After I finished I was ecstatic with the results!